On Wednesday I flew along with another one of our pilots in our beautiful, big Caravan. He needed some instrument currency, so I was the safety pilot. Basically, he did all the hard work while flying with foggles so he couldn't see out of the airplane, and I just made sure he didn't go into clouds or get close to other planes. I was looking forward to a relaxing, calm day for a change. :)

But then we got called to pick up a pregnant woman in Lebuson. While turning around at the end of the strip to take off, we got that let-down feeling on the left side. It took a loooooong time, and a ton of work to get our Caravan un-stuck. By the time we got out I was covered in mud and soaked with sweat. It wasn't just me though. Half the village was there helping. Without them, we'd probably still be stuck! The good news is, we DID get the woman to Tarakan, and she should be o.k. So much for a light day though. :) 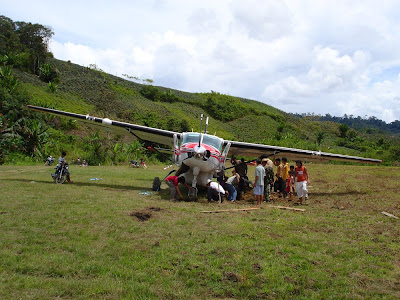 After we finally got un-stuck, everyone took a breather under the shade of the plane. 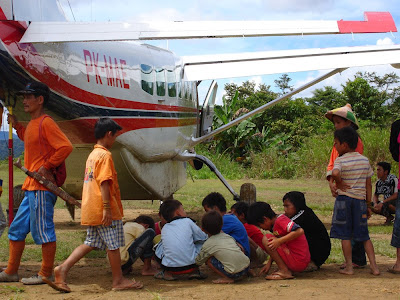 Below is a little video of one of the many times we pulled the plane. Trust me, 99% of the time I was in there pulling too. Really I was! :)

Wow, great movie!!! Who was the pilot?

Nothing like a light day! You don't show any pictures of you or the pilot after it was unstuck. Did you jump in the river afterwards? Great to see the pictures and video. That strip has always been soft even after they added a bunch of rocks.

Nice work dave. You never know what to expect when you leave your house in the morning. You're still my favorite first-born son-in-law.

Hi!I just found your blog and I have a caption contest every week and was wondering if I could use the photo of your son and the gecko(eyes crossed)?

My blog that I have the caption contest on is penofjen.blogspot.com

Hey Dave! Great video clip! Wish I was there to give you a hand along with a 10 gallon jug of Gadorade for all those that helped! Mission accomplished!

Steve and Laura,
Since Dave got stuck interior (not the airplane, I mean stuck overnight....bad magnito) I will answer for him....it was Alan. Dave was flying along as a safety pilot.

Jennifer,
You are welcome to use the picture if you wouldn't mind linking back here somewhere in the post.

Wow, Mom, you are just handing out those "favorite" awards left and right, huh?! :) I'm just glad you didn't say he was your favorite first born period....then I might be hurt (even though we all know it's true anyway!):)

To my sweet husband who will read this when he gets home,
I love you!! You're the best thing that's ever happened to me!
Blessings,
Joy

Thanks for all the comments everyone. I love to hear from you! It's true what my beautiful wife said...I had to spend the night interior b/c of a small mechanical issue. I'll do a post about it soon. Still trying to catch up. Actually, it was pretty nice to have a "secretary" answer my mail while I was gone. Thanks Joy!

I had the AWESOME privelege of being led to your blog today...what a treat. Praying for your amazing ministry and your invovlement, we are HUGE MAF supporters. Oh and we have two little boys Tyler (4) and Tanner (3) So now I feel very led to KEEP praying for you specifically. Love to and your amazing family. May you know that God is working out His kingdom work through you!

Nichole
and Steve Hamblin (Steve works for CubCrafters here in the US and is a huge airplane "junky" he led me to view your blog!)