Warning: This is a bit long, but I think you'll like it. Read on.

I've eaten a lot of strange things over the years. From Brazil, to Alaska, to Papua New Guinea and now Indonesia, there's never a shortage of local "delicacies." Let's see, among other scrumptious treats, I've savored the mouth-watering flavors of snake, monkey, alligator, boiled porcupine, raw fish (not sushi--big river fish,) raw and dried bear and moose fat, beaver tail, fish ice cream, grubs, sloth, unidentifiable partially-cooked meat...well, the list could go on, but you get the point. (Below, the little brown things are fish, fried up whole--crunchy on the outside and chewy on the inside!) 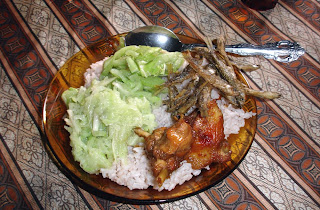 I actually enjoy trying new foods. And most of what I listed above, (note that I said most, not all,) were actually quite good. Back in college my roommate used to like to drag me to little "hole-in-the-wall" restaurants where no one spoke English and the menu was indecipherable. Then we'd order some unknown delicacy, and try to figure out what it was that we had eaten--but always after the deed was done. Trust me, it's better that way. :) Again, I figure if someone else can eat it, then I'm always willing to give it a try.

Well, here in Borneo, I've had many tasty treats. When interior, we almost always get to dine on various types of cooked or boiled jungle pig, buffalo, deer, and fish, as well as little muddy snails from the rice fields. A few weeks ago I had my first pig liver. I liked that about as much as my mom's liver and onions--still wake up in a cold sweat every once in a while, having nightmares about that spongy, bloody organ that filters out the bad stuff, all sizzled up with onions and staring me down on a cold, white plate. Sorry mom. I'm sure you're the best liver cooker out there, but I'll leave the liver and onions eating to dad.

None-the-less, like always, I smiled and grinned and swallowed the generous helping of slippery pig liver chunks one after another, all the while saying how it was the best pig liver I'd ever eaten. (You can always say that the first time you have something, and maintain both your politeness and your honesty. After that it becomes trickier.) And then there's the fish. I've had all types of fish here. Most of it is really tasty. Again, a few weeks ago, while having a quick lunch with a friend from a village interior, I had a bunch of little river fish. There's been times when I've been a little confused as to how to eat the fish interior--for example when they're really too small to pick the meat off of, but too big to eat whole. And so I have to sort of stall a bit to see what everyone else will do.

But this time, it was obvious. These little guys were meant to be eaten whole--head, fins, bones, tail and guts...golden crunchy on the outside, chewy on the inside. I gotta tell you, they were actually really, really good! I had several helpings. In fact, I tried to convince Joy to whip me up some of those crispy fishies here at home...but that didn't happen yet. :)

Anyway, all that to say, I ran into a new one the other day, that really threw me for a loop. While sitting down to eat with a pastor friend, I was surprised to see the size of the chunks of fish that had been cooked. "Well finally," I thought. "A fish that I can actually pick the bones out of and still have some good sized meat." So that's what I did. And it was delicious. I know that people interior don't waste ANYTHING! So I had those big fish bones licked totally clean! Even the stray cat that marks our yard every night would have been proud.

So I was a bit confused when we were all done, and I realized there was some chuckling going on--in my direction. I paid a little closer attention to what they were saying to each other, and couldn't believe my ears. Looking around at everyone's plates confirmed my fear. They were totally clean--not a single bone in sight. So I just bypassed all cultural norms and came straight to the point. "You eat the bones too? These are big bones!" And they said, "Oh ya! Just be careful when you chew them. They are can be really hard and crunchy, and they're sharp, and can get stuck in your throat."

No kidding!!! That's why I don't typically eat fish bones on purpose. But then, slowly, I saw my fingers pick up a long, slender fishy bone from the neat pile on the side of my plate...and slowly it moved towards my mouth. I had flashbacks to liver and onions, lima beans, stuffed peppers! Cold sweat beads formed on my brow! Could I swallow them one-by-one, whole, like I used to do with the giant, steaming lima beans? Or focus all my mental energy on imagining a juicy taco, while trying to slip them down with a swig of water like I had done with the liver?

No, this was a whole different ball game. These suckers were dangerous! And so, one-by-one I carefully crunched up each bone, trying to keep from piercing my tongue and lips, and finally swallowing with a nervous gulp, hoping that I wouldn't find myself keeled over hacking like my old Siberian husky used to do when he swallowed a fish bone. Finally, it was over. And my smiling hosts excitedly asked me what I thought? "Wow, those were the best big fish bones I've ever had!" Here's to hoping I'll never have to make that statement again. :) 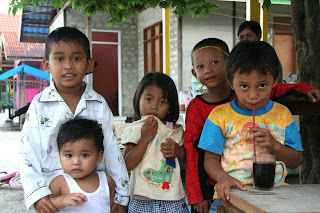 OK. So you were subjected to severe abuse of being forced to cope with liver & onions staring at you from a white plate. Little did you realize that those were the training sessions for snails and huge fish bones. My only regret is that I was not there to watch and cheer when you did it.

Keep up the good work and "bon appetite"
Dad

You make me wonder if the others ate the bones when we had ikan bakar after hiking in and out to the waterfall in Long Sule. My mom cooked liver because it was "good" for you. The rawer the more iron. Yes much of what mom cooks I still like but not liver.

You must be the real missionary. Either that or just a real man. I'm not sure that I would have eaten the bones.

Dave - You're such a great writer! And a real trooper! Wish I could have been there with you eating all those "delicious" dishes. One of the greatest things in life is being able to sit around a table eating "good" food and sharing it with excellent company as yourself.
Be sure to keep all your writings. One day I and can see you writing books of your Indonesian adventures that will pay for your kid's college! Thanks for giving us a glimpse into your exciting life on a regular basis.

Some people pay lots of money for BONE MEAL supplement. With you, it's a benefit!