We made it...and we're still alive!! Thanks for your prayers. It was quite an adventure! I'll break it up into several different posts each covering a day or so of the trek. 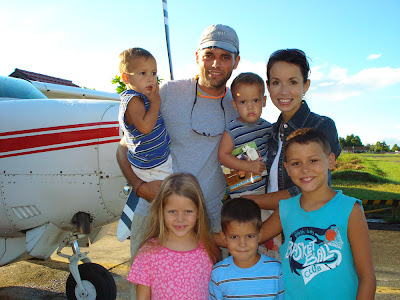 Just before boarding the MAF airplane (as a passenger rather than pilot for a change), we snapped a family photo. We first flew to Malinau, and then on to the village of Pujungan (below) were we said goodbye to the plane and started the tougher parts of the journey. 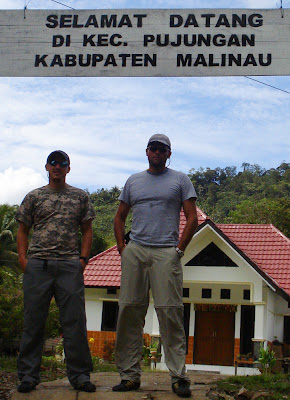 From Pujungan we headed upriver by motorized wooden boats to the tiny and picturesque village of Long Jelet. The river has numerous rapids that are to swift and dangerous to drive the boat through. So everyone gets out and pulls and pushes until clear. As exciting as this river was, it would prove to be nothing compared to the adventure of the Kat river that awaited us on the other side of the long trek. 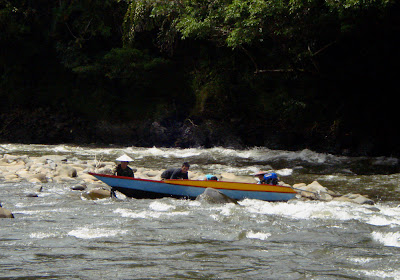 Along the way we stopped to see a little waterfall a few minutes hike from the river. This area is absolutely beautiful, with many waterfalls, huge rock formations and virgin forest. But again, this was just a small taste of much more remote and rugged things to come. 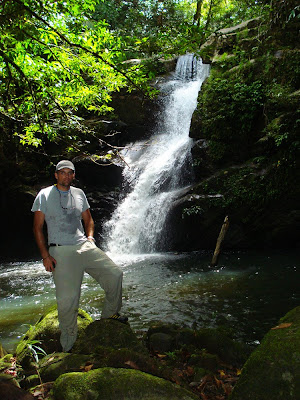 As the boat guys drove the final minutes into Jelet we hopped out and opted to walk the trail into the village, walking across the suspension bridge, hanging like the giant ribcage of a prehistoric animal 15 feet or so above the shallow water. 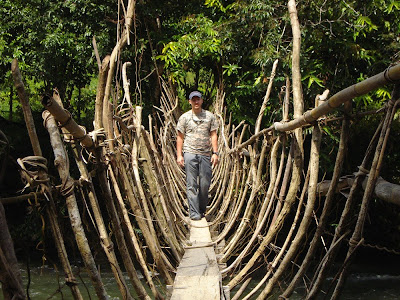 We arrived in Jelet in the late afternoon and had time to walk around a bit enjoying the beauty of the last "civilized" place we'd see in some time. 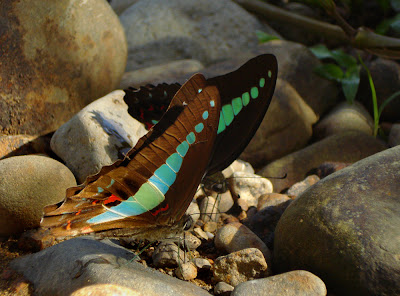 That evening there was a church service (even though it was a Thursday night) and Paul and I were obviously given the privilege of sharing. Folks were quite interested in why the crazy pilots who could take an airplane 30 minutes from Pujungan to Data Dian, would instead opt to boat and hike nine grueling days through rugged jungle.
Many times as we met people in Pujungan and Jelet, they simply couldn't contain their feelings. "Are you crazy?" "Why not take the plane?" But we had our reasons. 1. We love adventure and experiencing God's creation up close and personal. 2. We appreciate the opportunity to fully experience, as few have, just how legitimate the need for MAF is out here in the vast expanses of rugged jungle. 3. There's nothing like experiencing pain and suffering together and then recounting stories around a campfire for hours, to "menjalin hubungan" (weave relationships) with other men. Trips like this give Paul and I a wonderful inroad to build friendships and relationships that will last. We often just don't get chances like this during busy flight days.
As we stayed up late that night sitting around in a smoky room talking with both our guides and the village leaders, the awesomeness of the task we were about to undertake really struck us. We had known that some German tourists had tried this trip a year or so ago, but had never been picked up on the other end by boat. They had to hike back to Jelet unable to complete the journey. What we didn't know was that this had actually happened several other times as well. In fact, nobody had successfully completed the entire trip from Jelet to Data Dian since apparently the very first missionaries came through here back in the WWII era. We were following a historic route, one which we hoped to only walk once. But the challenges and variable to pull it off were quite astounding.
As our trip began, our admiration and respect for the courage and resolve of the early pioneer missionaries in their quest to reach the unreached, grew tremendously. But more on that later.:)
Posted by Dave at 3:16 AM

PTL you made it safely! I have been praying for the guys on the trail and the ladies in the trenches. I am jealous of your opportunity but am too sedentary for such a monumental undertaking. I am reading Wings Over Shangri La again and those early pilot had a lot of time on the trail once they mandated a pilot had to inspect a strip before the first landing was made.

Welcome home, Dave. Glad to see you're all in one piece.

So glad to see you home safe. We an incredible experience. My husband is totally jealous. I on the other hand think you're nuts :) but am looking forward to reading more on your trip. My husband is hoping to get his pilot's license (possibly when we get to Australia). He is in love with the Piper cub (Nate Saint's plane). Anyway, so glad to see you home. We've been praying for you and your family.

I'm a regular reader of your wife's blog and wanted to stop by to say hello and welcome home! Your pictures are amazing - looking forward to hearing more!

Hey Dave - We thank God for all the answered prayers for your safe journey. As well as taking care of Joy and the kiddos.
We look forward to all the pics. and news of Paul's and your adventure.

Get some rest - Lew

Amazing pictures, once again. Thankful that you're back with your family. I'm sure they are too.