Last week I bought a small electric water heater for the equivalent of about three U.S. bucks. Although it said "Japan Standard" on it, I knew that it was NOT Japanese made. I knew that for two reasons; first of all it would have been a lot more expensive if it was, and secondly it would have been much higher quality. But hey, I got my money's worth just from reading the "Englonesian" (that's a word I made up for this kind of English) on the box. Check it out: 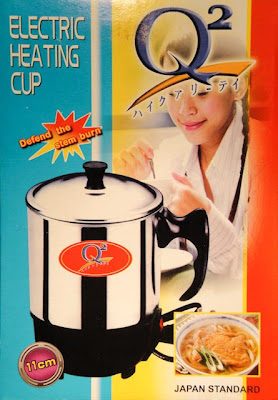 Above is a picture of the front of the little box. My favorite part is just above the picture of the cute little pot, where it proudly proclaims, "Defend the stem burn." Hugh? Does anyone know what in the world that means? Well, it's my new slogan! DEFEND THE STEM BURN! Yeah!
Below is the back of the box. This is one serious little heater pot! I mean, where else can you get a pot with all these amazing features for so little money!!! They get better the further down you go, so don't skip any. I'll type them out below, just in case you can't read the features in the picture very well. I especially like the part about the empress. Empress? What the...? The $3 water heater pot includes an "empress" to link the plug??? My version was missing the empress I'm pretty sure. 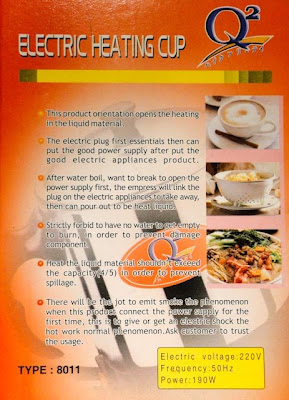 In case it's hard for you to read in the picture, here's exactly what it says:
- This product orientation opens the heating in the liquid material.
- The electric plug first essentials then can put the good power supply after put the good electric appliances product.
- After water boil, want to break to open the power supply first, the empress will link the plug on the electric appliances to take away, then can pour out to be heat liquid.
- Strictly forbid to have no water to get empty to burn, in order to prevent damage component.
- Heat the liquid material shouldn't exceed the capacity(4/5) in order to prevent spillage.
- There will be the jot to emit smoke the phenomenon when this product connect the power supply for the first time, this is to give or get an electric shock the hot work normal phenomenon.Ask customer to trust the usage. 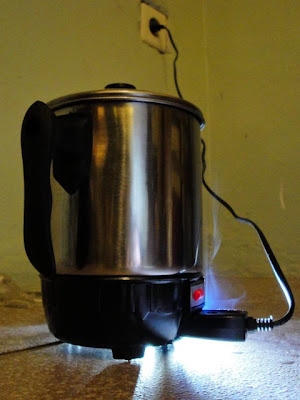 Well, as you can see above, the first time I plugged it in, there was indeed "the jot to emit smoke"...but still no empress showed up. I wasn't sure about the "give or get an electric shock the hot work normal phenomenon" part of the operation, but frankly I just stood back with total awe and admiration. After all, I, as the customer, was asked "to trust the usage." And you know what? In about seven minutes I had two boiling cups of hot water, albeit seasoned with a touch of electrical smoke and melted plastic. But hey, that's a whole lot of entertainment AND functionality for just three dollars! :)
My challenge for you this week: go out to your workplace, your school, your home, wherever you are, and proudly, courageously DEFEND THE STEM BURN! You won't regret it!
Posted by Dave at 10:00 AM

Oh. my. goodness. I am laughing so hard my children think I've gone plum nuts. That is great!

We once bought a clock with similar instructions.

And, the other day at a hotel restaurant, we could have ordered "Pork fillet, constipated with cheese and mushrooms". We decided to pass on that one...

I'm so going to "defend the stem burn!" It's my new mantra.

The Lady of the Holler said...

Ah, Dave, that made me laugh. Hope you're able to Defend the Stem Burn this week! :o)

I will definitely be defending the stem burn here in Oregon. Can't wait to get started.

I've been "defending the stem burn" for years!! Where have you been...Out of the USA or something?

Have a God Filled Day
Shirley

Haha! That's great! When my family and I were in France last year, we had our own share of translation trouble. Mom tried to translate the labels on the washing machine online and came out with one of the possible cycles being "The Lone Ranger".
We figured it out through trial and error in the end. :)

LOL! I love how it asks you to trust :O) Riiiight????? Funny post! I follow your wifes blog. Thank you for your ministry! Praying for God to bless your family and health and safety!!

Somebody should open a "Defend the Stem Burn" facebook group

That did indeed make me smile! What do you think that slogan should actually mean?

That was flippin hilarious. You are a funny guy Dave. I think I woke Ryker up from laughing too loud. Could you guys hear me over there?

My brother is part Englonesian - he translated (most) of that with no trouble!

This is so funny!!! I have seen translations like this in Costa Rica as well, usually from some other language to English but sometimes Spanish to English.

Sometimes you just sit there trying to figure it out. It can be an adventure. The other day my mother in law bought a chirping bird for my son as he loves birds. The box says it is a natural phenomenon and not a qualigy problem that there maybe a sound coming from inside the bird. (This is the sound of the motor and is not referring to the chirping). I was like "natural phenomenon?" Since when is a motor in a bird a natural phenomenon? And what about the chirping???

You have to wonder where they learned English and where the get the big words from.

I keep these instructions just for a time like this!

That was hilarious. And I am with your friend Carrie, that I too, would have passed on the "Pork Fillet constipated with cheese and mushrooms"!
Please be assured I will be defending the stem burn and thinking of your family while I do

Needed a belly laugh today!!!! And I brought up this wonderful blog to my hospital co-workers. Interestingly, the volunteer who makes all our coffee immediately understood, "Defend the stem burn!" Most coffee pots have a "stem," but yours apparently "Prevents burns!" Wow! Meanwhile, "Defend the stem burn" is soooooo my new slogan!
Rainy T.

This was so funny I had to link to it! http://asinamirror.com/hilarious-must-read

I remember reading Amy Carmichael's stories of the Japanese language. To say that chicken was for dinner, the Japanese translation literally went something like this: "An honorable chicken has deigned to cease to become"!!!!

Maybe we should all get some REAL smoke emitters with the Empress link thing, then we will be better equipped to defend the stem burn!

Ok, ok, months late, but I read it to my husband (who speaks great English, but it is not his mother tongue.) and he only smiled and said, "Watch out for a steam burn."

Of course! Why didn't we all think of that?!

Haha... I'm laughing at this b/c it brings back so many memories of life in Asia! Reading the 'Chinglish' on packages was always entertaining. We also had electric water heaters that would plug into the bathroom wall - how is that ever a good idea? My husband was enjoying a shower once in a hostel where we were staying in Vietnam when the water heater caught fire. If only we had known to defend the stem burn! :)