We finally made it back to Tarakan--and still half alive!  It would be a dramatic understatement to say that this trek was by far the most grueling and difficult trek we've ever done through the jungle.  It was much, much more than that--it was quite frankly insane (but that can be said with the advantage of 20/20 hindsight).  Here's a shot of Paul and I and with our families just before departing the MAF hangar in Tarakan. 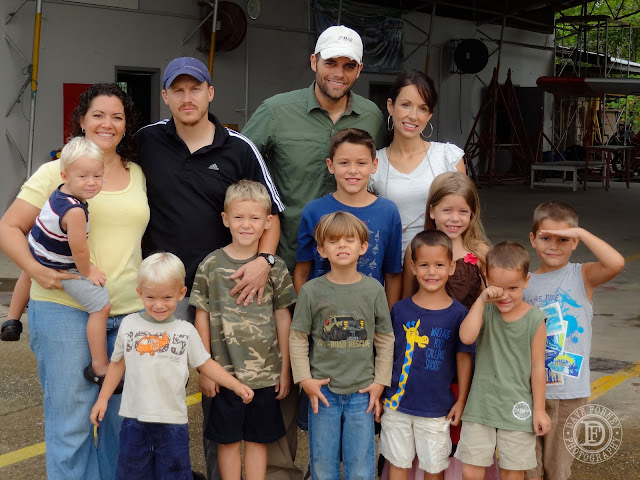 On the second to the last day of the trek we broke out of the canopy with a view looking back upriver at where we'd come from.  At the lower right of the picture you can see a river.  That river snakes it's way up through the rugged cliffs and mountains into an area that we pilots refer to as "no man's land."  Indeed, what was supposed to take six to eight days took double that--and never, till the last day of hiking did we encounter a trail.   In fact, the majority of the time, we saw not a single sign that a human had ever been in the area before--no sign at all!  It was indeed "no man's land!" 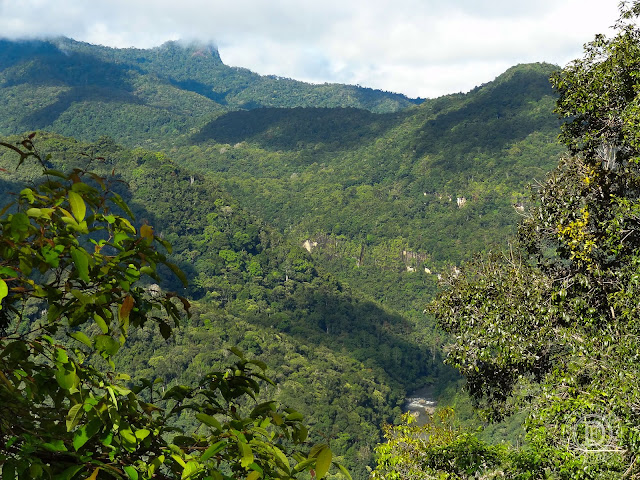 Our trek took months of planning and preparation.  It all came together in the last week, when we flew three guides (friends of ours) out from their respective interior villages (near our ultimate destination), who then accompanied us on an MAF flight into Data Dian.  From there we took two motorized canoes a day and a half up the Iwan river towards Malaysia.  Here's a shot of the four guys from Data Dian (that drove the boats) and our three guides, one each from Long Jelet, Long Pua, and Long Pujungan, and Paul and I, on the banks of the upper Iwan River. 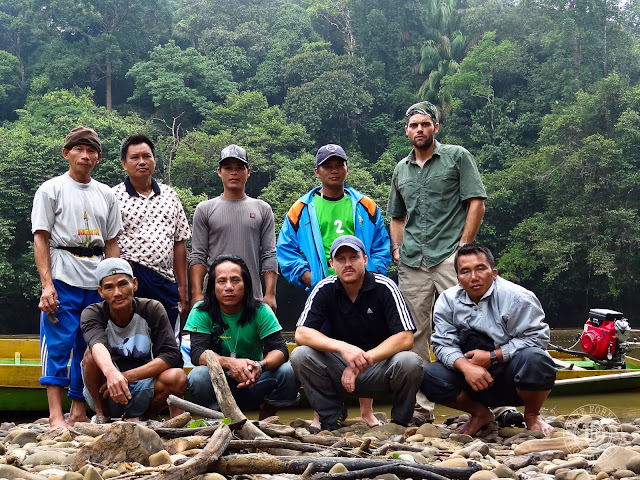 From the Iwan, we entered a small, clear-black water river called the Suhen.  This is a shot taken just beyond the mouth of the Suhen River as Pak Markus is getting ready to throw out a fishing net.  Yes, it really was as wild and rugged as it looks.  Very few people ever venture into this area anymore, and in a matter of days we would be in an area where NO ONE goes at all! 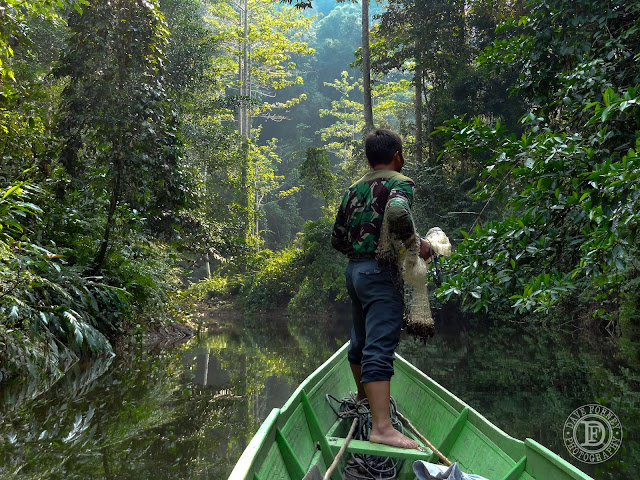 We only made it a few hundred meters up the Suhen river before we hit gravel bars.  From there we said goodbye to the boats and any hope of help or rescue from the outside world.  We set out (five of us) with our 45-50 lb packs and a lot of energy and excitement, hoping to find signs of an old trail that was used in the early 1900's.
Though we would never find that trail, and indeed were slowly forced into a desperate bush-whacking scenario for the next two-weeks, we did enjoy the primordial beauty of a lush, undisturbed, virgin rainforest!  Waterfalls abounded as streams cascaded down the steep slopes of jungle-covered mountains and rugged ravines. 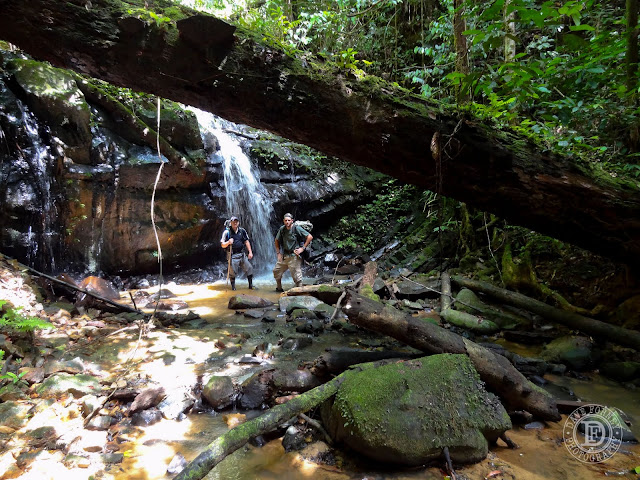 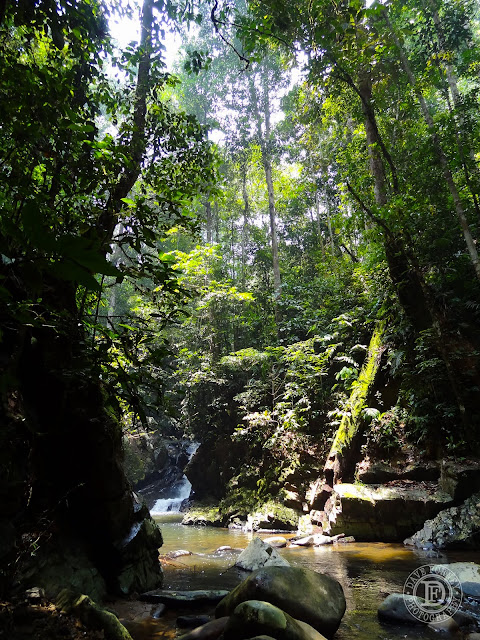 But then the rains came.  It began to rain and rain and rain!  I guess that's why they call it a rain forest!  The rains swelled the rivers, and on day two or three our guides made a critical decision to abandon the search for the old trail, and instead continue on the left side of the Bahung river, which would eventually spit us out into the Pujungan river system and eventually into the area of Long Jelet.  The truth is that they had no way of knowing where we were or which direction we were going--and were unable to remember the area from many years before.  There was literally no sign of anyone having ever been where we were going--ever.

I was extremely grateful for my awesome Garmin GPSmap 62S handheld GPS, into which I had loaded navigational charts of the area that we use for flying--without which we would have literally had no idea where we were or which direction we were going!  There's many stories related to this, but too long to share here.  Suffice it to say, the GPS was a life-saver--not just figuratively, but probably almost literally! 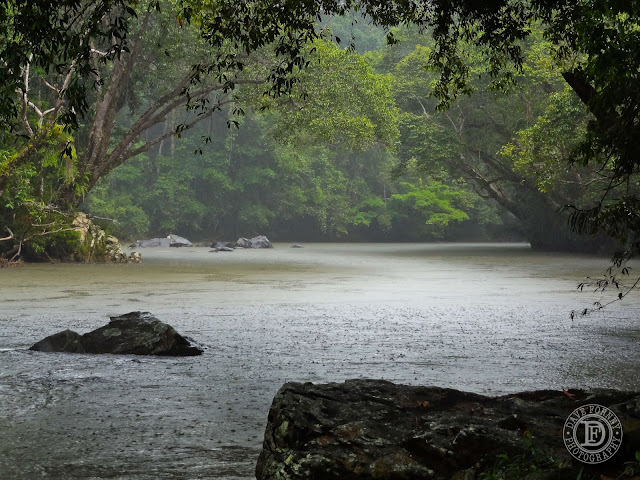 Below, Paul crosses one of many "creeks" that was swollen do to the heavy rains! 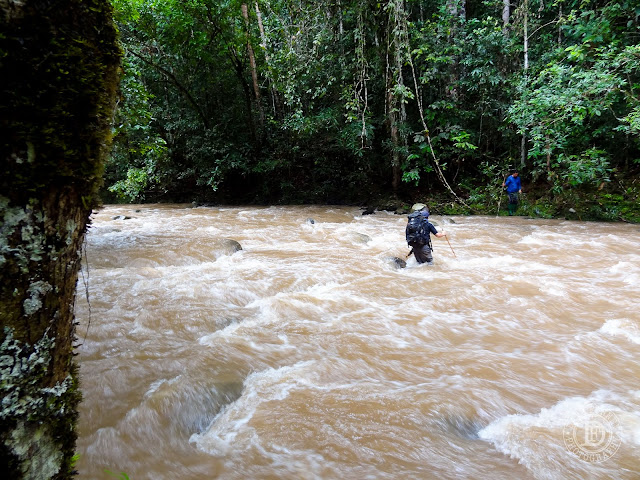 And yes, we suffered our fair share of leach bites, scrapes, falls, rotting flesh, blisters, stings--you name it we suffered it!  This is par for the course for those that travel without the airplane! 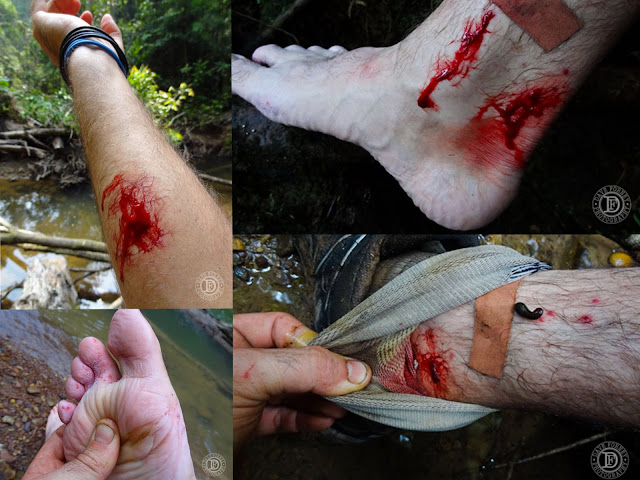 After the second and third and fourth day it becomes harder and harder to keep things dry.  In fact, everything--including us--begins to take on the smell and look of something rotting and/or dying.  Perhaps more than anything else, this is one of the toughest parts of long-distance jungle trekking--there is no escape from the elements, they just seem to start consuming you! 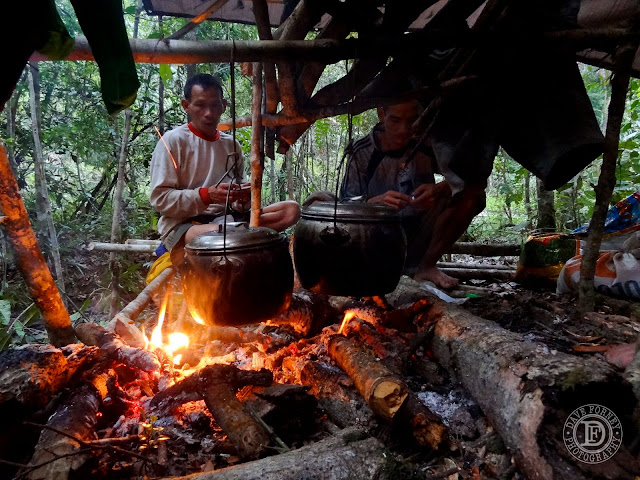 Well, that's a quick intro into our jungle trek of 2011.  I plan to do two more posts on it, but there's obviously way more to write and show you than what would be practical, so we'll have to settle for just the highlights.  As it is, I'll leave you with this shot, which was the first time we were able to see the sky in our first eight days of trekking.  The jungle canopy swallows you up and shuts out all but the faintest of light.  Beyond that, the incessant rain and clouds gave a gloomy, ominous look to small holes of light that we were able to glimpse now and then.  However, on this evening, on the banks of the upper Pujungan 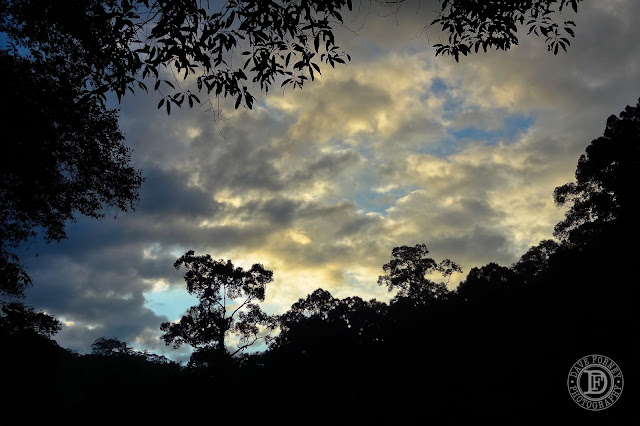 Tune in next time when I'll highlight some of the critters and creatures we encountered along the way.  And I'm sure some of you have questions like, "why in the world would you do something like this?" "Are you seriously nuts???"   I'll try to answer some of those questions as well.
Posted by Dave at 4:06 PM

Your blog, your words, your adventures, your photos are phenomenal. They inspire me. I can't even remember now how I happened upon your blog, but I love it!

I am an Australian, who has spent time living in, and travelling throughout Asia, now living in Europe. Every time I see your adventures on your blog, I am back in Asia in my mind. Your words and photos capture so much of what is special. I am a private pilot, so you airplane stories are also captivating reading for me.

All of you are courageous and doing a fantastic job for the locals by the looks of things.

My wholehearted thanks, and congratulations on surviving your trek!

Wow, that is rugged! A week passed and I started to get a little worried, but am glad y'all and your families made it and are safe. Already what I can see of your trip is fascinating; all these years and there's still 'no man's land!'

Awesome! We have been watching your blog from the shadows for quite some time but this post flushed us out into the open. Absolutely awesome. My wife can't wait to see the pictures of all the creatures. Give us the whole story!

As usual another awesome blog post.
Sure did enjoy following your trek thru the rain forest and look forward to the next chapter. Keep up the good work.

You guys are too nice! Very much appreciate your encouraging words. Thanks for taking the time to comment!

I really enjoy keeping up on your blog and seeing all the amazing adventures that you all have. Thanks for taking all the time to communicate with us and share the photos and descriptions that really bring us right into the heart of your ministry with the people and their part of the world.

Glad you can spend a little time on the ground after how hard you work in the air.

Praying the Lord's blessings for you and your beautiful family.
~ Brenda Olson

Thanks so much for putting so much time into sharing the pictures and descriptions of your amazing ministry. It really allows us to feel a part of where you're at and what you are doing.

Your family is gorgeous and I pray that the Lord will continue to bless you all as you serve so far from home.

So glad that you have had some time to do a little scratch that BIG adventure on the ground after how hard you work in the air.

Thanks o mcuh for sharing your great story- its quite an inspiration and reaility check! A freind and I are planning to hike fom Long Layu to the upper punjungan, and raft downriver to the Bahau in early november- its looks like we are going to get a work-out! We've been trying to find maps of the area, and finding it really dificult- are you able to point us to any maps of the area?- particularly in electronic format we can store in GPS. We'll have guides, but judging from your experienec, back-up sounds worth having. Thanks in advance, and thanks for your great blog. My email is the_knave@hotmail.com.
Cheers,