I have a good friend, Pak Kalfin, who lives in Binuang in the Krayan region of Northeast Kalimantan.  Last Sunday his brother, Pak Diono, was getting married to Loli in the neighboring village of Long Padi.    My good friend and fellow MAF pilot, Paul, and I were invited to attend.  Paul's in-laws were here so his whole family plus my son, Hudson, and I all piled into the Kodiak and flew 45 minutes out to Long Padi to attend. 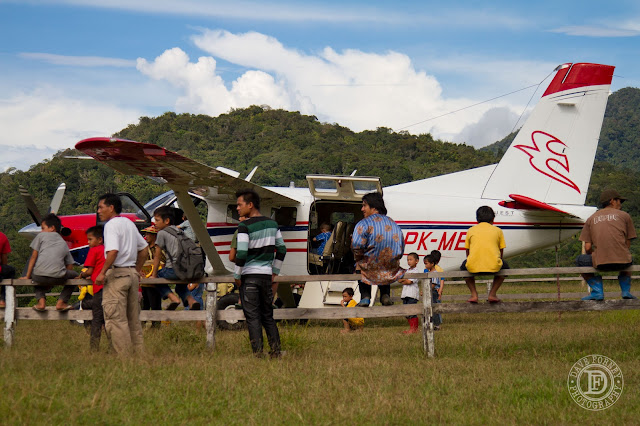 Preparations for the wedding had started the week before.  But when we got there it was still a beehive of last-minute activities--mostly revolving around the preparation of food--mountains of fat-laden jungle pork, equally copious piles of water buffalo meat, pot after pot heaping full of rice, many types of vegetables, cakes, fruit etc. 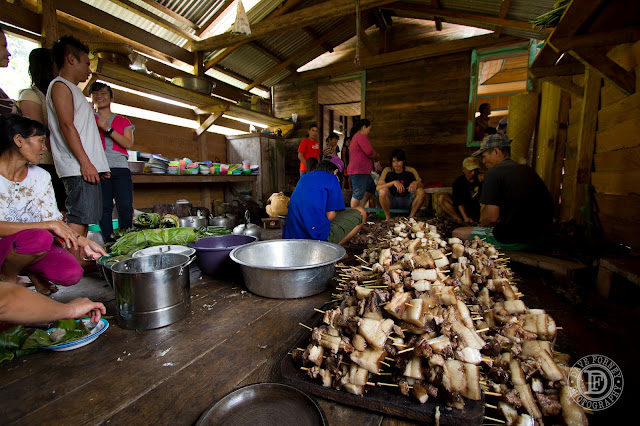 This gentleman was all too enthusiastic to show the kids and me the buffalo--well, actually just his head--that had given his life so everyone could feast.  It was just laying there on some bloody banana leaves on the floor in the kitchen, right next to all the pots of veggies and rice, smiling with those big camel-like teeth.  It struck me as a bit funny for some reason.  It's not every day you see that scene.   I'm sure they were planning on utilizing it in some of the dishes--they don't waste much. 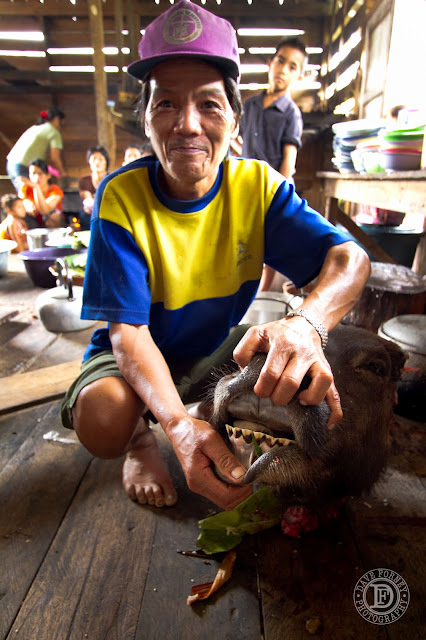 And speaking of not wasting much, here's one of the buffalo's legs "walking" off with a young boy, who's intense face and confident stride made me think he had a clear and definite plan for this "prize".   He took it across the airstrip and disappeared into his house. 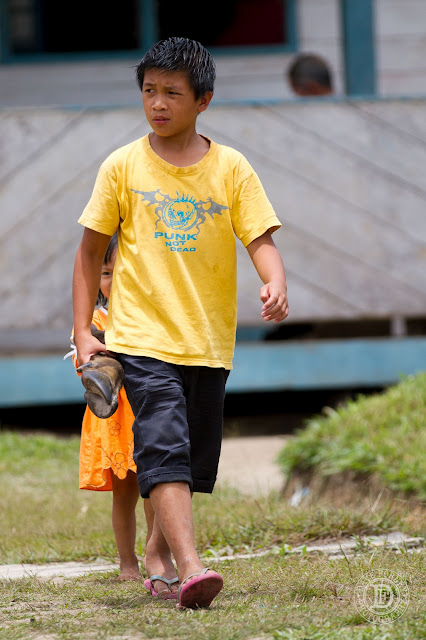 Meanwhile, there were men outside the community building keeping a steady tribal rhythm going on their bamboo drums.  It's pretty impressive watching various guys just walk up and randomly squat down, pick up one of the drums laying around and join in--each one playing a slightly different part to a continuous song.  They came and left at will, but always there were at least a few playing the drums. 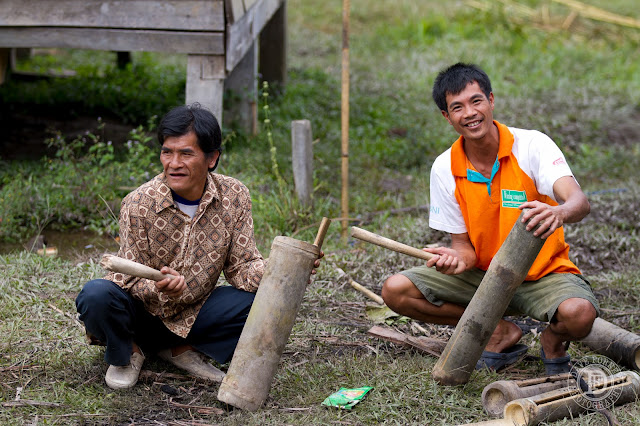 Shortly after we got there and finished all the introductions we ate...for the first time.   There would be plenty more opportunities to eat.  They go all out at these events, and eating is a big part of it!   The food is great, and it always boggles my mind that they cook it all over a fire! 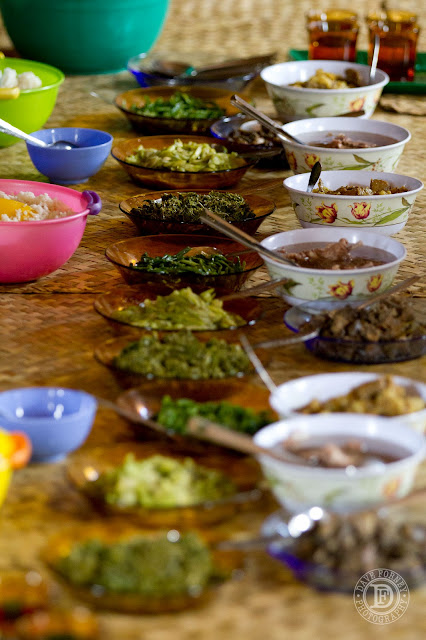 People were still arriving from surrounding villages, but as they came the community building began to get pretty packed.  Everyone was talking, eating and having a good time. 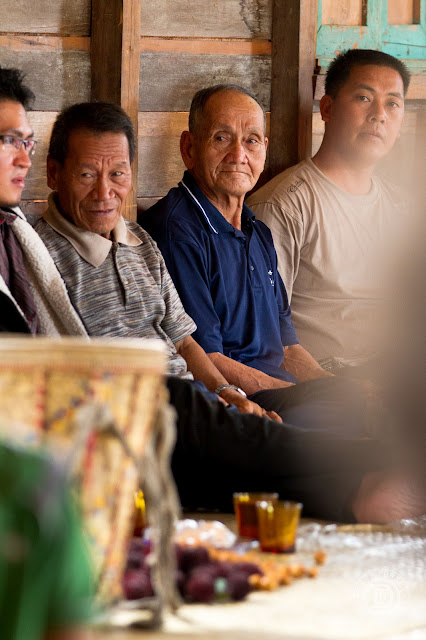 Then, suddenly they all left.  They went back to their houses (or friends houses if they weren't from that village) and changed into their best clothes.  Then they came back to the church about 30 minutes later.  No sooner had everyone returned than out of nowhere came the bride, walking up the airstrip, with her mom.  To be honest I was totally not expecting to see her dressed up so fancy in a sparkling white wedding dress in the middle of a small, rustic village in the jungles of Borneo.  Plus, it was really, really hot and humid!  How did they do that.  It was like magic.  I mean, Hudson was already muddy and I was soaking wet sweated, and here comes a bride to be that looks like she was prepped in an air-conditioned dressing room.  And I can assure you they don't have air-conditioners in Long Padi! 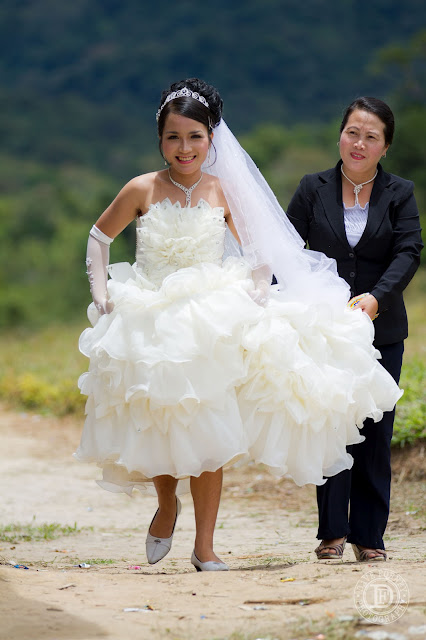 Within a few minutes they had fired up the generator, got the speakers to stop squeaking, chased the dogs out of the church, and were ready for the bride to walk down isle. 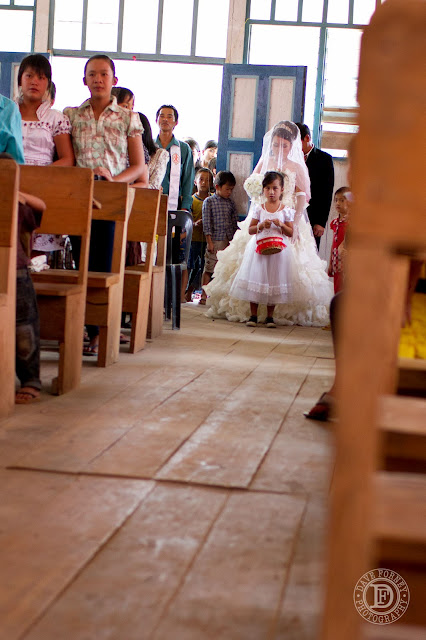 The ceremony sort of followed a typical American wedding...sort of.  What was interesting to me is that many of the weddings that I've been to in town--the people in the wedding party often like to dress up in traditional Dayak clothing.  But here, in an actual Dayak setting, they did the exact opposite--dressing up in more traditional modern, or "western" type clothing.  Interesting I thought.  Aren't they a fine looking couple? 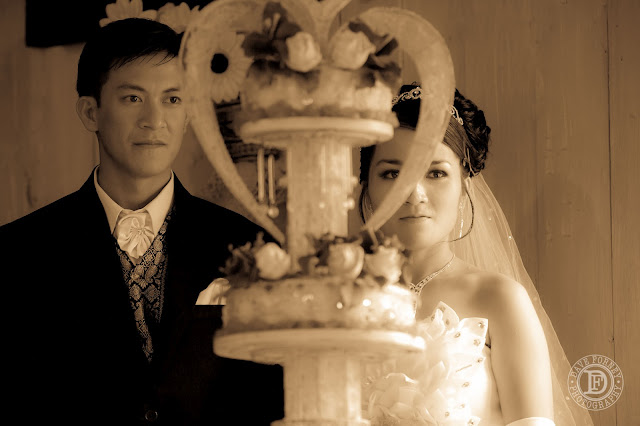 And isn't that flower girl cute?  I have no idea where they got these dresses from, or how they kept them white.  Seriously, this is not a well-off village, and I've never seen anything like this before interior.  My guess is that someone hand-carried them in from Malaysia, since they're not too far from the Malaysian border.  But I just couldn't get over how I was there in the middle of nowhere, watching a wedding in a very rustic church, where the people were dressed like we were in a fine hotel in Singapore.  Amazing! 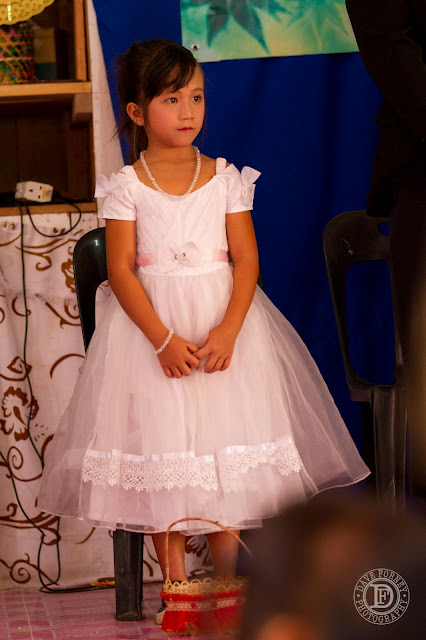 Here's a shot of the newly married couple, Diono and Loli, along with Paul and his family, and Hudson (far left) and me. 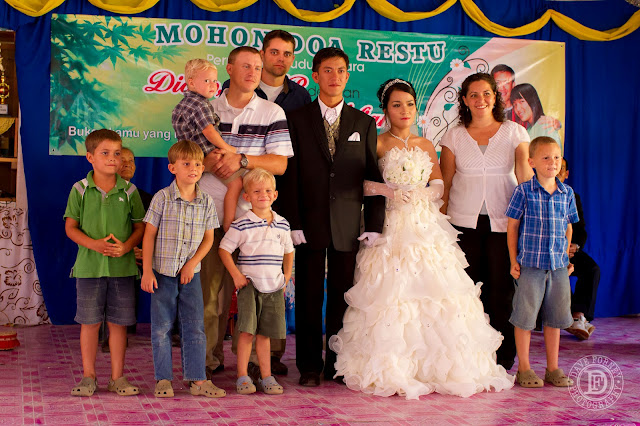 By 3:00pm we had to take off and head back to Tarakan due to weather.  The wedding was over but the celebrations would continue late into the night and the following day. 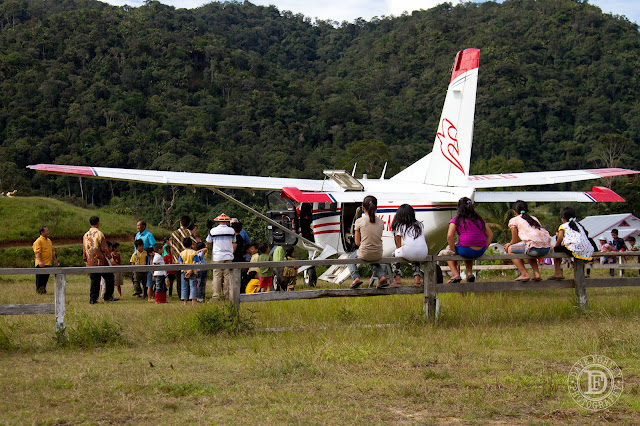 Many of the people who were there for the wedding were flown in by MAF, another small example of one of the many ways that we serve the people here in Northeast Kalimantan.  It was a blast to be at the wedding.  Many of these folks are good friends and I know it meant a lot to them that we made the effort to be there.  But likewise, we always go away feeling humbled and blessed by them.  I love this job and consider it a privilege to be here serving my Indonesian friends in the name of Jesus.
Posted by Dave at 7:00 PM

Dude, the shot of the guy holding the kerbau's lips open is PRICELESS! Love it.