Christmas in the Dark

Here's our Christmas tree...all lit up and looking pretty.  We bought it in Bandung, Indonesia when we were in language school.  What you can't see in this picture is the fact that I've installed two pieces of PVC pipe into the "trunk" to help it stand up, and there's a zigzagging rope going from the base, all the way up to the top, tying it to the window grate behind.  It likes to fall over.  And it doesn't help that our cat thinks we installed it there for him to climb.  A number of branches are missing and we lose more "needles" every year than you can shake a stick at--but it's got a lot of character, and it's been our Christmas tree the whole time we've been in Indonesia--this will be our 8th Christmas since then.

The decorations are minimal--some ribbon and a few simple things from the U.S. and some white lights.  Oh the lights.  Don't get me started on the lights!  I remember joking about Christmas lights in the U.S., how frustrating they were--how much of a pain.  Well, it's a whole different ballgame here.  The only lights we can get in town are LED lights that give off an eerie, metallic bluish tinge, or colored lights that blink and flash like there's no tomorrow.

We're much more "traditional" and reserved, preferring instead, plain white, incandescent-type lights, that don't blink.  Can't get those here.  So over the years, starting in language school, we would buy a string or two anytime we were in one of the big cities--in Java or sometimes in Balikpapan, IF they were available.  They're much more expensive here than in the U.S., a LOT more expensive! If we were lucky, one of the strings would still be working by the time Christmas was over.  I would have to snip and mend wires, and jerry-rig bulbs and generally just continually fuss with the lights day after day.  I'm always afraid they're going to catch on fire.  In fact shortly after we got the tree, I snipped an end off one of the branches and took it outside and intentionally tried to set it on fire.  There's not really many safety "regulations" here like there are in the U.S., so I just wanted to make sure we didnt' have a beautifully decorated, tall pile of kindling, waiting to burst into flames.  Thankfully, I couldn't get the thing to burn, even with a blow torch.  So that was good!

But back to the lights--last year we were finally totally out of working lights.  Nada.  Zilch.  No more nice white lights.  I could no longer repair our old ones--my Fluke and me were at wits end, and all I wanted to do was put those nasty strings of lights into a bucket and stomp on them until there was nothing left.  Alas, we broke down and bought a string of LEDs.  But it just wasn't the same.  Aren't traditions weird?   I mean, who cares about a tree and lights--that really has nothing to do with Christmas--yet, in a place where it's tropical, and there's no outside indication that it's approaching the Christmas season,  our little tree brings a bit of nostalgia and Christmas ambiance into our home.  Well, our good friends, Paul and Beth happened to be going to Balikpapan around that time and they picked us up three new strands of lights--it was our most well-lit Christmas tree ever!

And that brings us to this year.  We're down to one working strand out of the three.  I had to use the other two to cobble together parts in order to keep the one remaining one working.  Someday I'm going to invent a string of indestructible Christmas lights with a lifetime guarantee--right after I solve nuclear fusion and perpetual energy.  But let me tell you something, you never really appreciate what you have until you don't have it--or at least until you have to work hard to get it or keep it.  So we're very thankful for our lights this year!  And don't they look grand?

Well, here's what our tree looks like, all lit up with our single strand of 100 lights.  Well, at least this is what it looks like on some nights.  But on other nights... 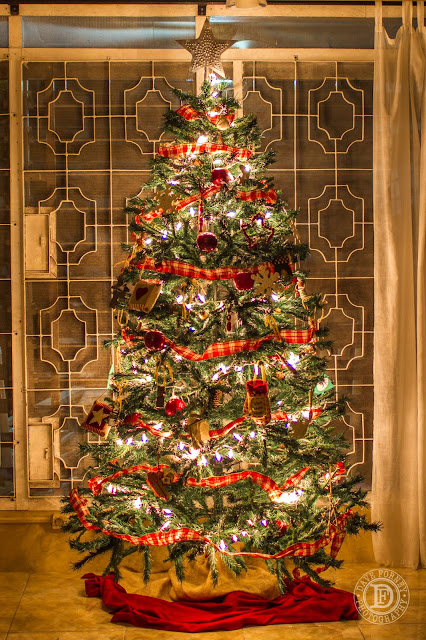 ...it looks like this, lit only by the beautiful back-glow of our neighbors generator-run porch light, and our motion-activated, battery-powered security light.  That's because, the power is often out here.  In fact,  it's been nearly a year now that we've had scheduled outages every two or three days, lasting 5 - 8 hours at time.  But lately it's gotten worse--with many unscheduled outages as well.  Any time of the day or night, the electricity can and does go out--sometimes for 15 minutes, sometimes for many hours. 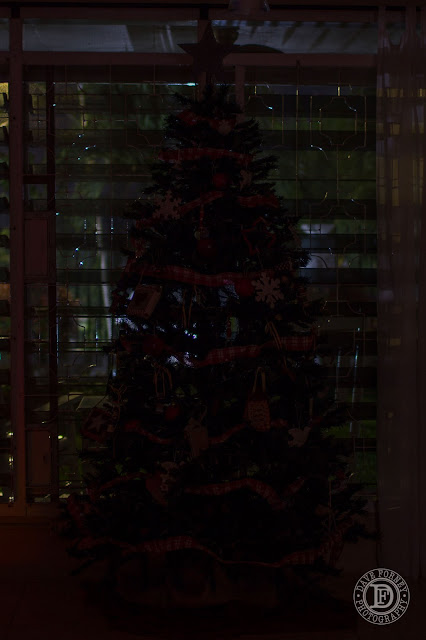 But you know what?  Just like the Christmas lights, I guess the power outages have helped us realize how to be more thankful for electricity, when it IS on!  There's always a silver lining!  And besides, Christmas isn't about a tree, or lights, or electricity...It's about celebrating the birth of our Savior, Jesus!  And we can do that anywhere, with or without a tree or lights or turkey or whatever!  We have so much to be thankful for--first and foremost that God loved us enough to send His Son, Jesus, to earth, to be born as a man, and then later to give His life for us, so that we can live!  That's the greatest gift of all, and indeed the real "reason for the season"!

Hi Dave,
Lovely photo even with one string of lights.
IF the tree doesn't catch alight, could you use candles? Or at least for a little while now and then?

I pray for your family often.
Sandy in the UK

I totally agree with not appreciating what you have till you dont have or have to work harder to get! We Americans have it easy compared to other countries. Lovely tree! Blessings to you and yours!

I don't like those LED lights, either. I enjoy Christmas lights, too, and sometimes I think of them as mini-lighthouses or something...not just pretty, but leading the way to safety. And it's a reminder of what we should be--lights that point people to the salvation of Jesus Christ.

Thanks for the comments, Sandy and Karina. Appreciate it! Sandy, candles would be beautiful--but they'd have to be pretty small. The tree branches are very thin and wouldn't hold up under the weight of much more than a birthday candle. But it would sure be pretty. We have 220v here.

The tree is beautiful... (both photos) and I'm kicking myself for not sticking some lights in the box.
Tell Joy, next year...
Fun to see your family's tree and makes me thankful for our minimal "light issues".
Merry Christmas to all of you!
Love,
The Chupp Family