Late Friday afternoon, just as the MAF Uganda Christmas party was about to start, I was told of an impending medevac for a lady who had broken her femur.  So yesterday, Saturday morning, I left bright and early to go pick her up from one remote location in Uganda, and take her to another where there's a great mission hospital, Kumi Hospital, known for having a a fantastic orthopedics department. 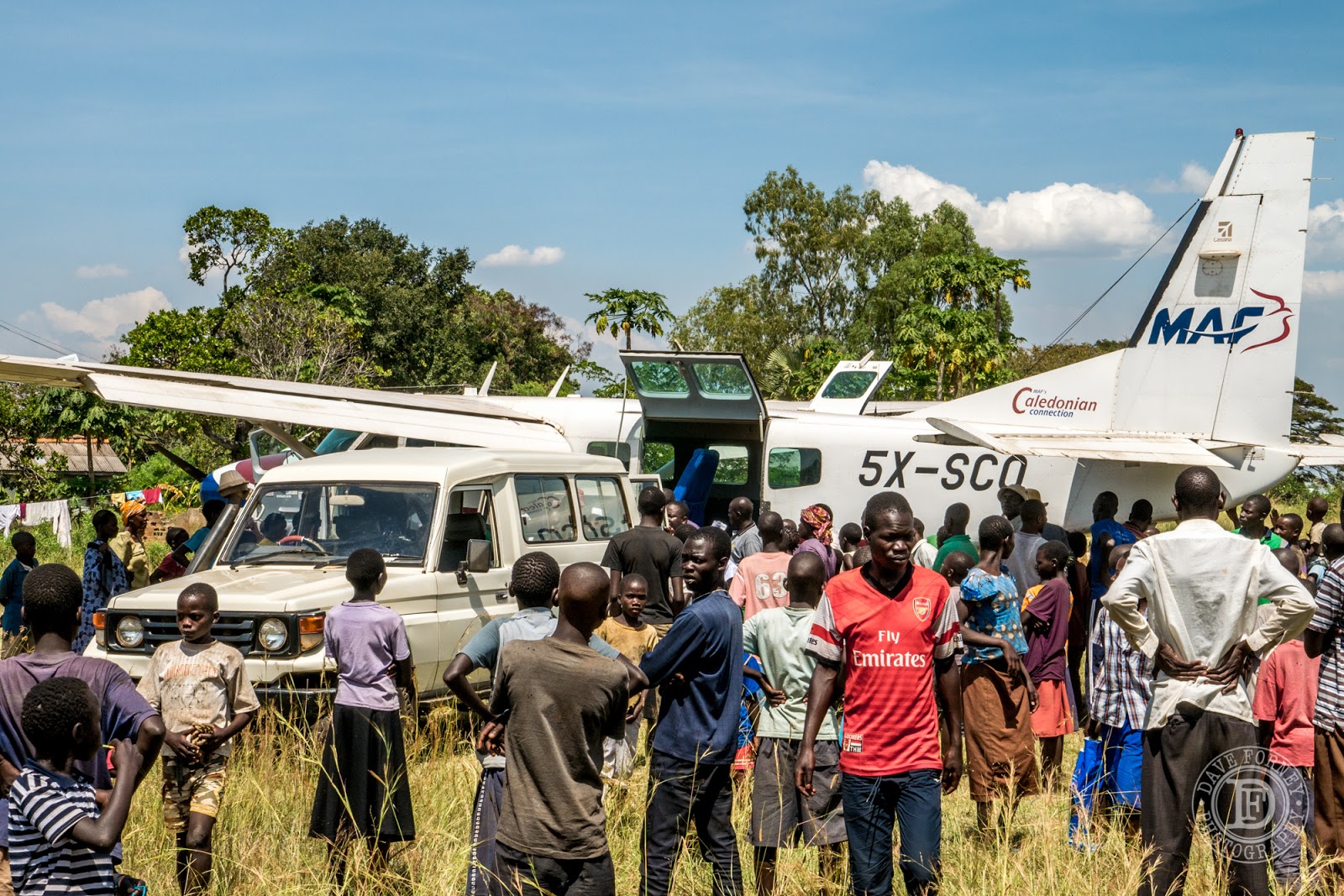 I took Andy along, one of our fabulous MAF engineers (mechanics), so he could see how the aircraft he helps repair and maintain are being used.  After we arrived at 9:30 in Kalongo, where we were to pick up our patient, we found out that the 4x4 ambulance that was to transport her there hadn't even left yet.   On Friday, Lois, a sweet elderly lady from New Zealand, who runs a children's home in Kitgum, slipped on some wet concrete stairs and fell, resulting in a badly broken femur, just below the pelvis.  Although there is/was an airstrip in Kitgum, it's in disrepair and totally unusable.  So the best option was for her to be transported by ambulance to the closest available strip where we could pick her up--that being Kalango.  Unfortunately, the only ambulance available in Kitgum was sent out on a call during the night to another remote location, and hadn't yet returned to Kitgum.  The drive from Kitgum to Kalongo is several, long, bumpy, dusty hours, so we closed up the plane and prepared for a long wait. 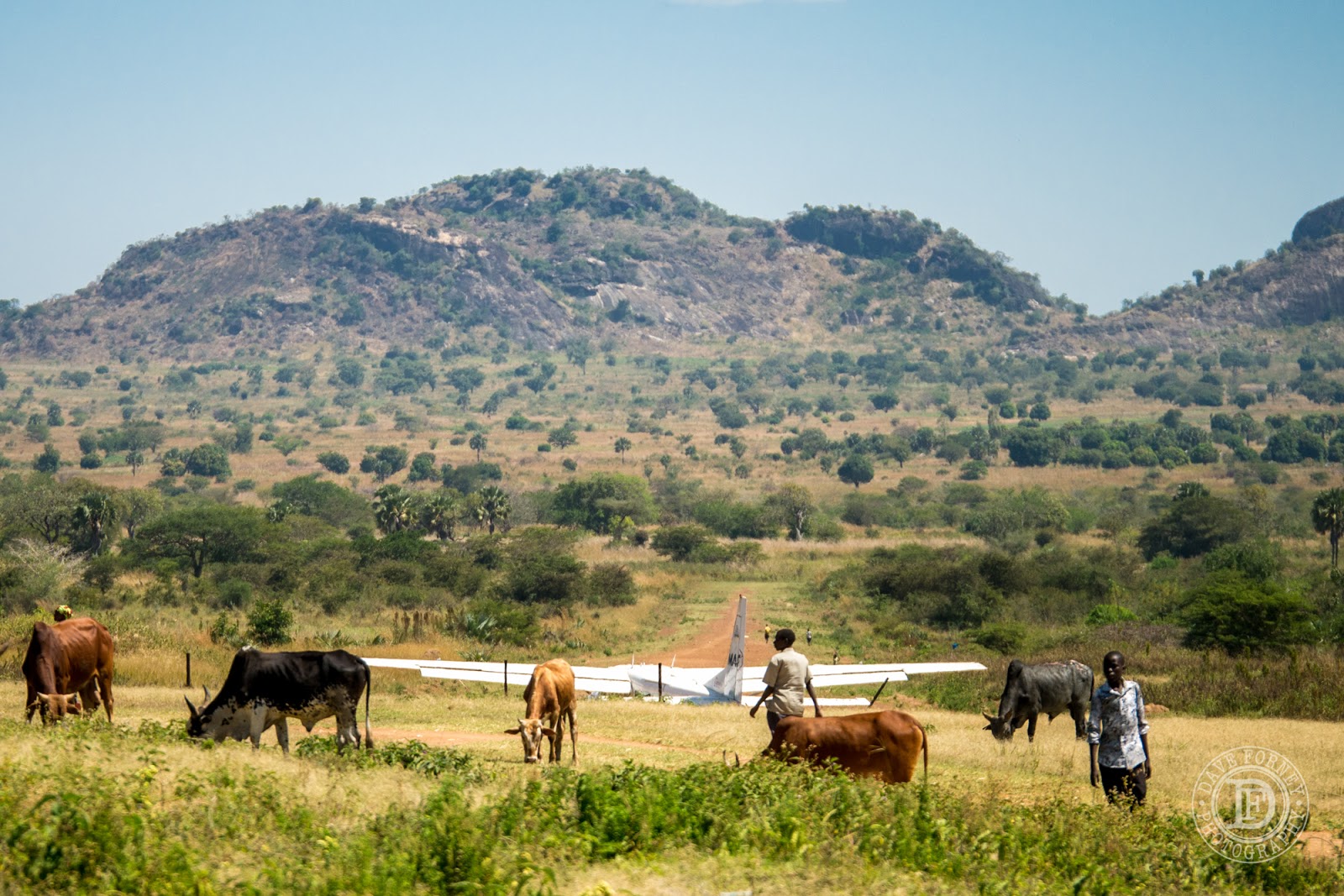 Kalongo is known among the pilots as being one of the strips where hundreds of kids swarm the airplane upon shutdown.  But unlike other places, these kids can be very ornery and bold, trying to pull, push, tug and hang on every surface of the plane they can get ahold of, if allowed.  Usually, there's guys that come down from the local Catholic hospital there to keep them at bay.  But due to a miscommunication I found myself, after landing, completely surrounded by hundreds of kids--all smiling and laughing and having a grand ol' game of "attacking" my plane on whichever side I wasn't.  It was a losing battle!  For obvious reasons I have no pictures of that--I was way too busy chasing kids away to be taking pictures!

Fortunately, within a few minutes, help arrived.  It's amazing how quickly the kids suddenly "respected" the plane, when the men showed up with their long, hardened, cattle sticks in hand, swinging them and shouting at the kids in their local language.  It was like the parting of the Red Sea, as these guys walked into the crowd of naughty kids, everyone staying just outside the reach of those ominous sticks of "discipline".  It was obviously great fun for the kids, as they squealed and jumped, staying just out of reach.  Clearly none of them wanted to find out what the "rod" felt like.  Within a few minutes they lost interest and all was quiet, with the guards relaxing under the shade of the plane and promising to keep it "protected" until we were ready to depart.  The sky was clear and the sun was piping hot--a typical day in Northeastern Uganda. 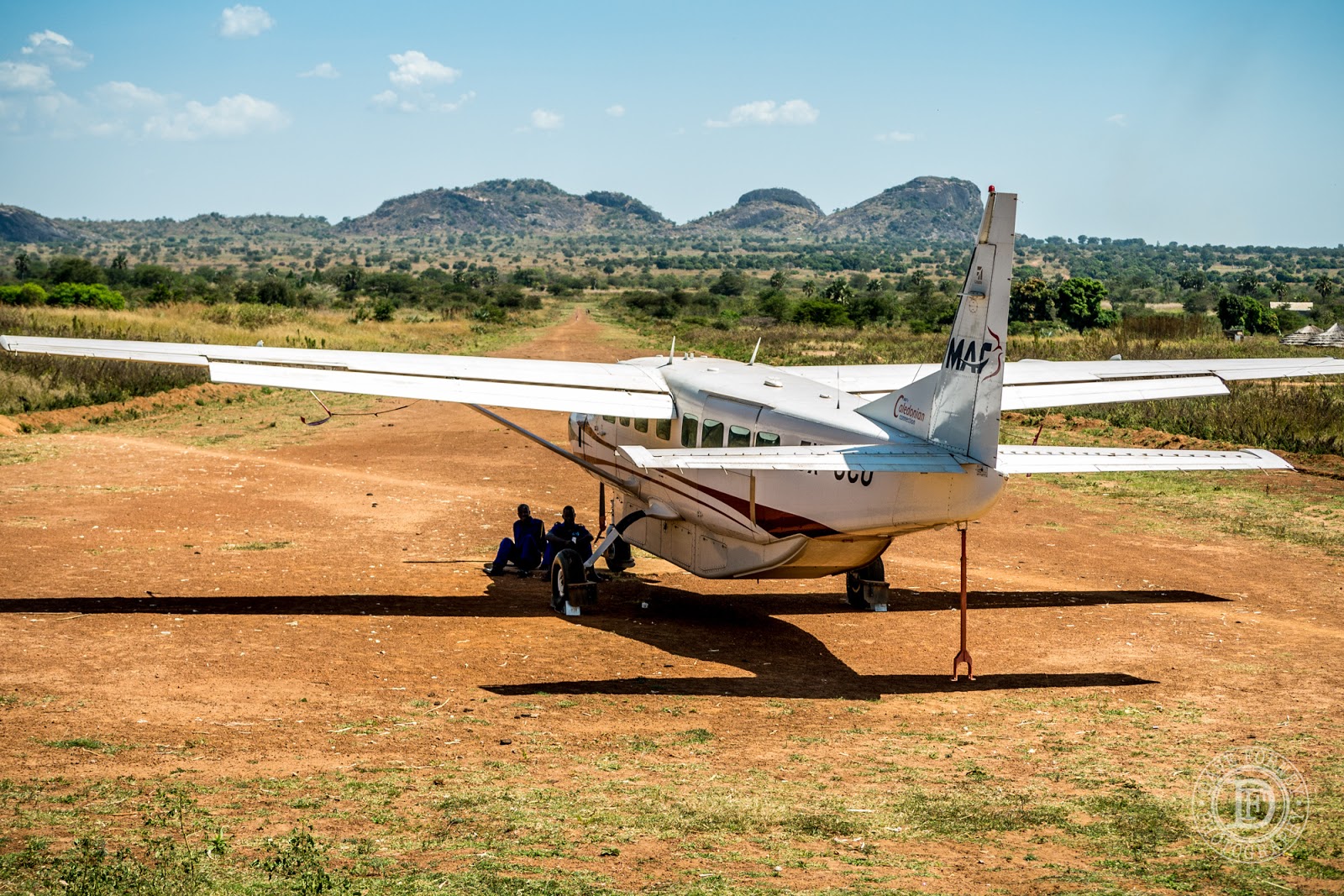 Off to the side, a few shy and well-behaved kids remained.  I don't at all mind having kids hang around if they're respectful of the plane and simply interested.  After all, kids love planes!!  They also usually love having their picture taken, especially if they can see the results.  So I snapped a few and then they laughed and laughed with joy as they saw themselves on the camera screen.  Perhaps next time I'm here I'll give them the printed images. 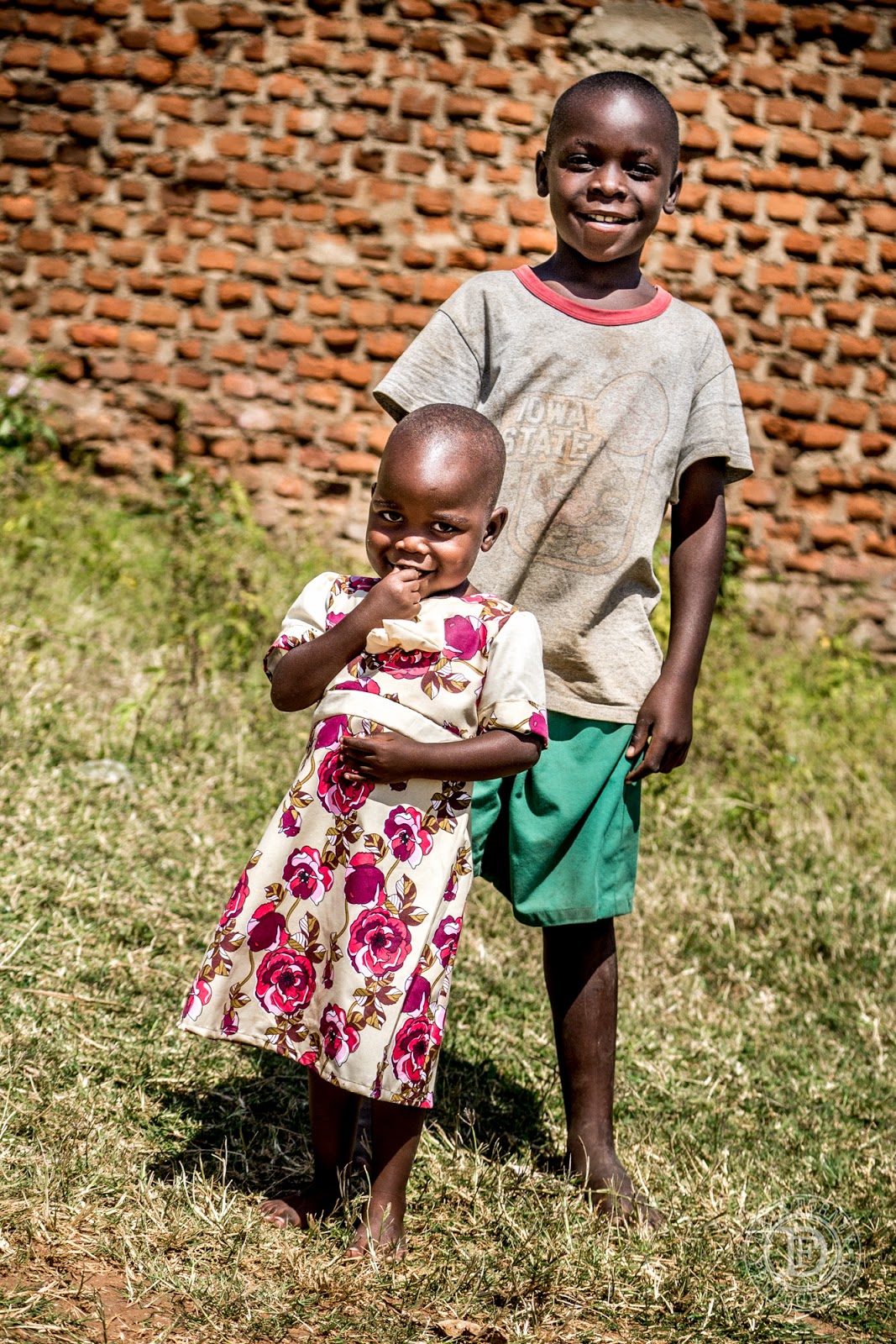 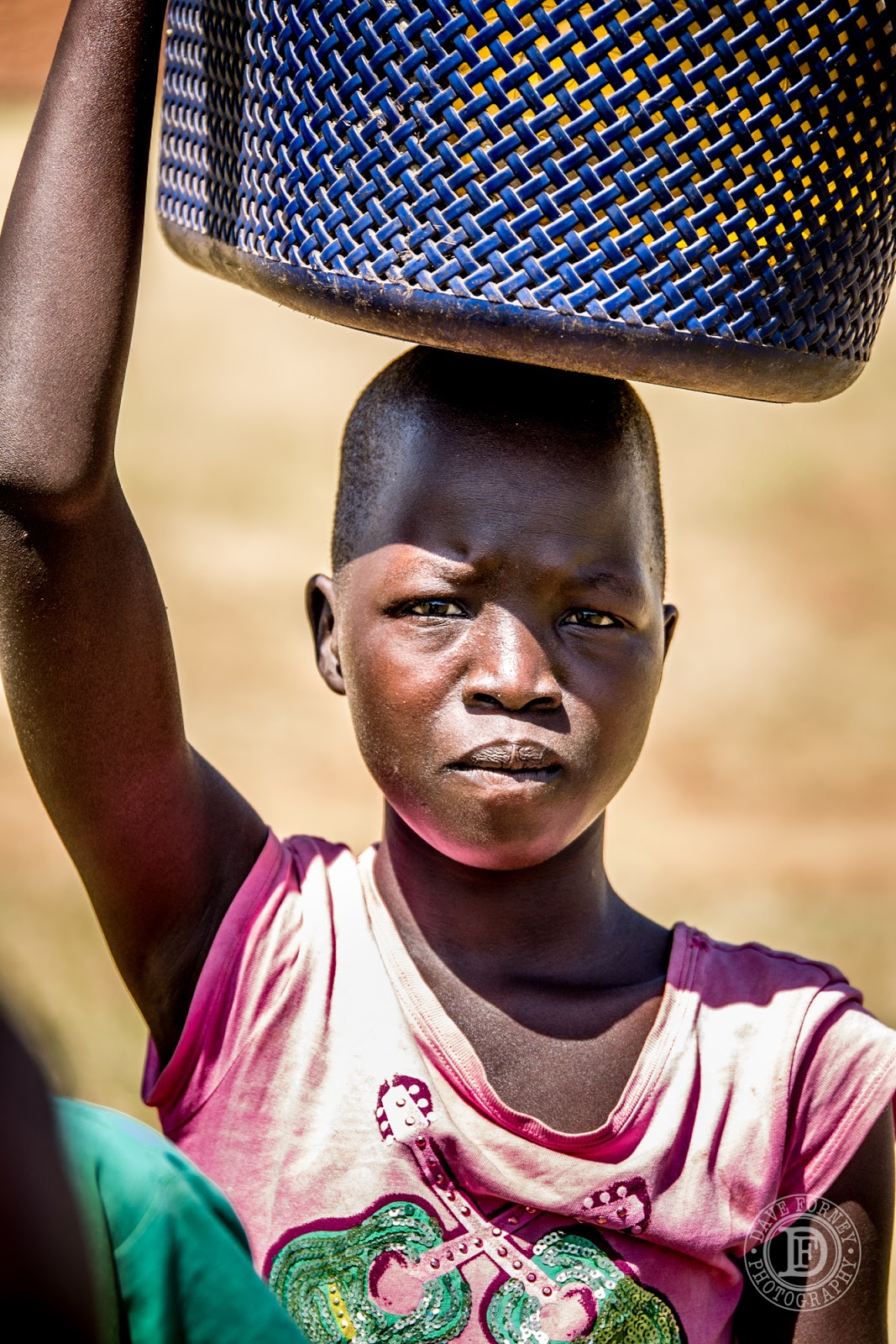 Meanwhile, our new freind, Kamilo, (below) offered to show us around the local Catholic Mission Hospital, also known as the Dr. Ambrosoli Memorial Hospital, where he works.  So we spent a few hours slowly milling around the various wards of the hospital and then sitting under the shade of a tree by the little canteen, waiting for the ambulance to arrive.  I'll do a separate post soon, showing you pictures of the Kalongo Hospital.

When the ambulance finally arrived, I was obviously too busy overseeing the transfer of Lois from the vehicle to the aircraft, and her care and comfort (as much as could be offered to a lady with a broken femur) to worry about taking photos.  However, I know Andy was taking some pictures, so perhaps I'll get a few of those to share with you in the future.

When Lois broke her femur she was in obvious need of advanced medical treatment.  Unfortunately she was in a remote part of Northern Uganda and there is nowhere close that could provide the care she needed.  She couldn't afford a Medevac flight, and the trip overland from Kitgum to the Kumi Hospital would have been an excruciatingly long and painful journey for someone in her condition.  MAF-International, upon finding out about the situation, covered the cost of the flight.  It would be an extreme understatement to simply say that Lois was grateful.  She continually expressed her deep appreciation to MAF and to the donors and all who help make flights like this possible.  She practically begged us to express her gratitude to ALL who play a part in MAF's ministry.

Upon arrival in Kumi, there was a large crowd gathered there to see the airplane.  They were extremely kind and respectful, and very helpful. (Photo below) 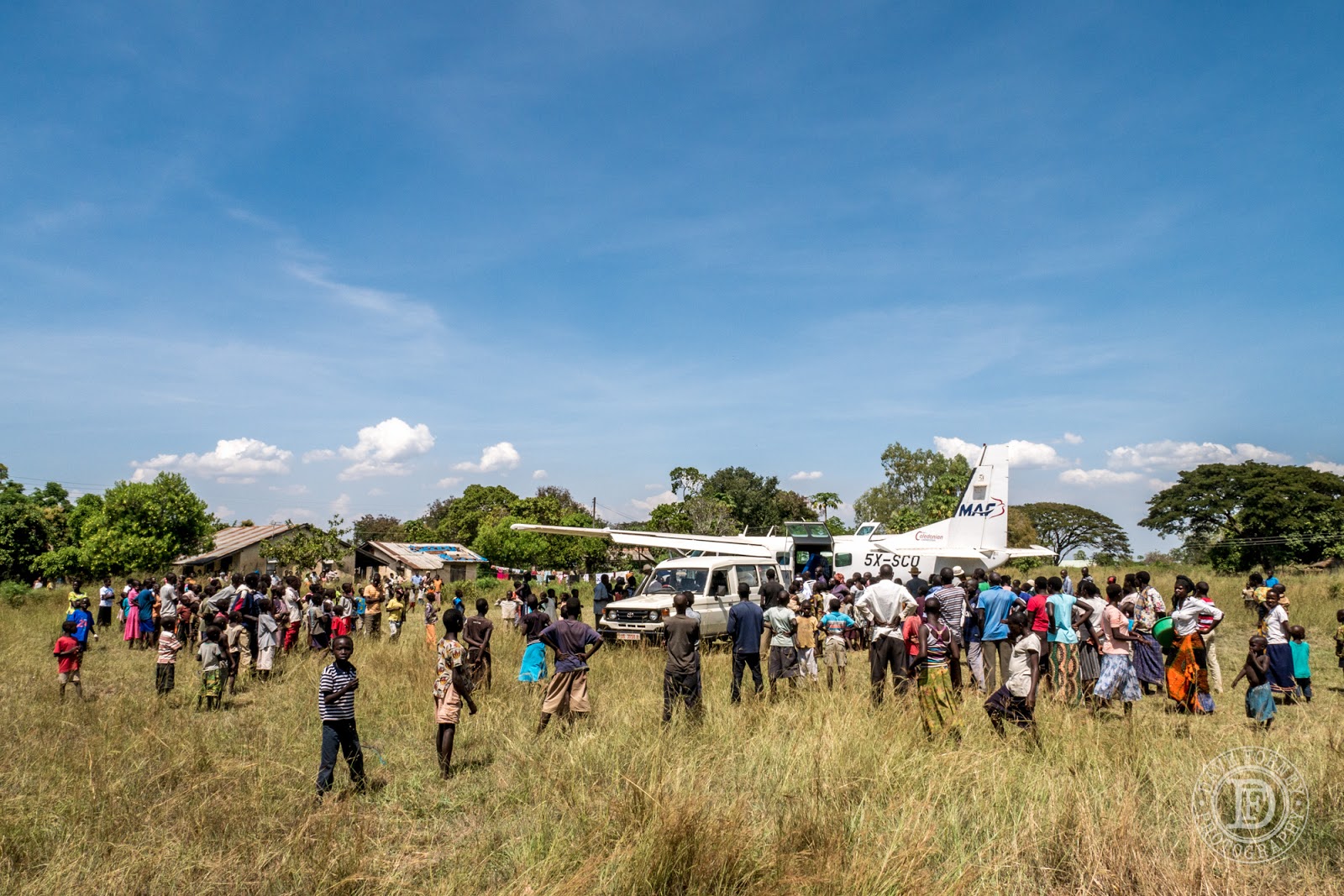 The medical team was there too, well-equipped and waiting for our arrival.  The doctors were handed an x-ray from Jackie, the young lady who was accompanying Lois from her Children's home.  They immediately examined it, right then and there under the tail of the plane, wanting to know what the situation was before moving Louis from the plane.  Everyone was very deliberate and careful in the handling and care of Lois, and again, she continually expressed her appreciation to all, both from MAF and from the Kumi Hospital.   The doctors and nurses there also repeatedly thanked me, and MAF, for providing the transport for Louis, clearly expressing that the alternative would have been awful for someone in her condition. 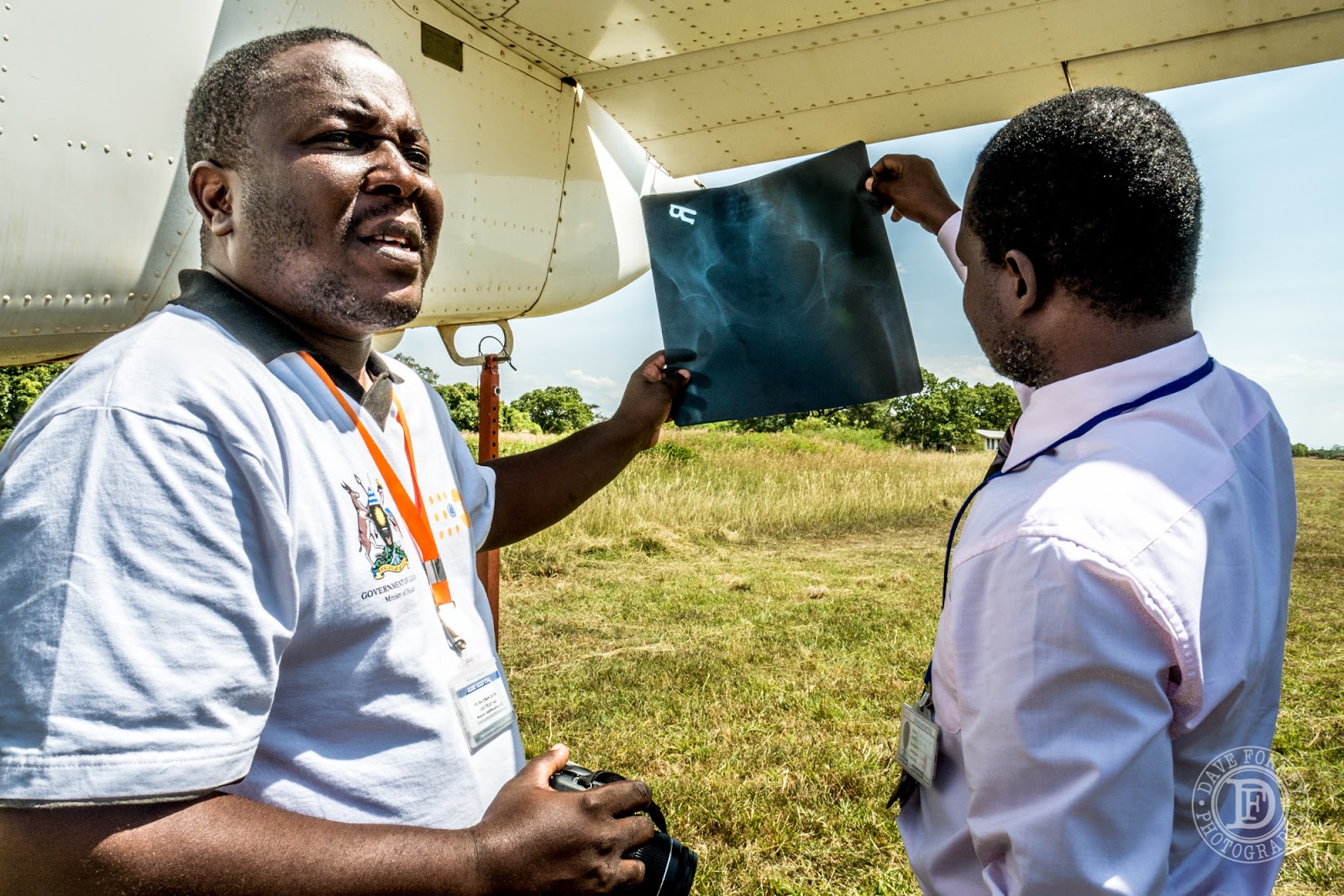 Kumi Hospital, originally started by the Church Missionary Society in 1929 as a leprosarium, describes themselves today on their website as a "preferred destination for the poor, for those who have not been reached, a centre for hope, healing and wholeness bearing witness to Christ."  I know Lois will not only be well taken care of there at the Kumi Hospital, but will also join the staff there in shining brightly the love of Jesus to many.   We pray that she'll soon recover fully (as soon as can be expected for someone with a broken femur) and be able to return to her invaluable work and ministry at the children's home in Kitgum.  It was a real privilege to be able to help Lois yesterday, and to be able to serve many like her who sacrificially and selflessly live out their lives serving those "less fortunate" in some of the most neglected and remote parts of East Africa.  Thank you for YOUR part in helping to make this possible!
Posted by Dave at 10:29 AM

Reminds me of a patient with a broken femur who was carried to the hospital in Haiti where I did maintenance. No option for a sensible transfer. Traction was needed for proper healing but nothing of that nature was available. The doctor drew a sketch and I welded together a crude traction device with pulleys, weights, etc. Less than ideal but a very grateful patient .