I was gone in Nepal for over a month, but I'm back now. The MAF relief operations continue over there, and I know the team would appreciate your prayers.  In the first weeks of the operation we were working extremely long hours, 7 days a week, so needless to say, I never had the chance to update the blog, or answer non-critical e-mails.

Now that I'm back in Uganda I'm trying to catch up on everything, and there's a lot to catch up on.  So I think rather than taking the time to write a bunch of new stuff, what I'll do is simply put up some pictures here, along with three stories that I wrote while I was over there.  I had every intention of posting them on my blog in one form or another, but simply never had the time.  I wrote this first one the second night I was there.  Then, I was literally too busy after that to take pictures or write again till the last few days I was there. So the second and third stories were written just before I left. I'll put each of those in a separate post with more pictures.

Here's the first batch of photos.  I know most of you are probably too busy to read the story, so I'm putting the photos first. But the captions are going to be extremely minimal. If you really want to know what was going on, you have to read the story.

Flying into the Kathmandu valley, the Himalayas were visible in the distance. The scene looked so tranquil and beautiful. But under the haze, and in the distance on the slopes of those rugged mountains, many thousands had died.  Tens of thousands more were suffering injuries and/or left homeless and in desperate need of help, cut off from the outside world. And a week later, another massive quake would hit the region, adding significantly to the number of dead, injured and homeless. 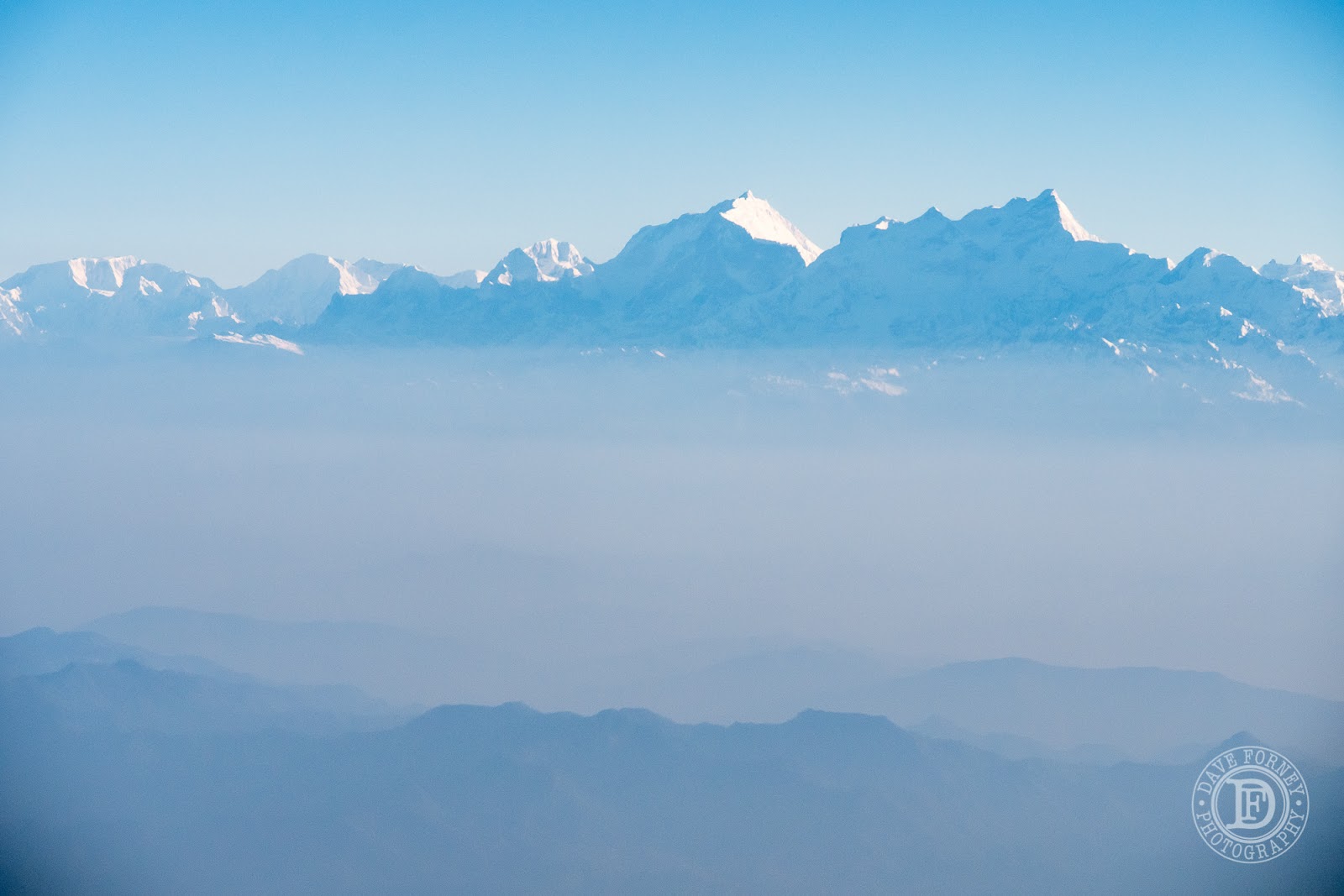 All of the relief operations were based out of the capital city of Kathmandu. 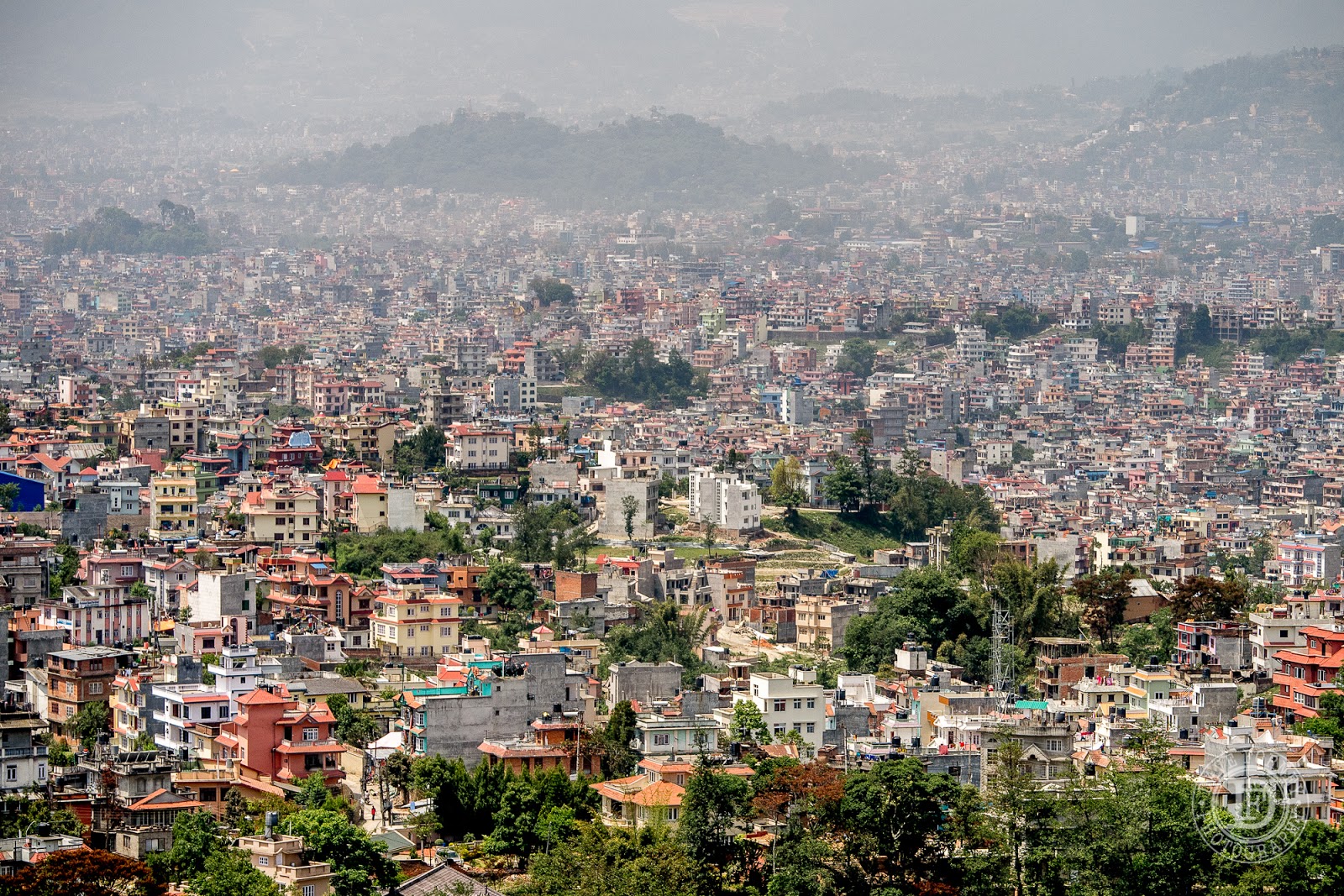 Although there was some damage in the city, it was minimal compared to the outlying areas.  Many buildings and religious temples and shrines were cracked, damaged, or destroyed, but frankly it was nothing compared to the villages in the mountains, many of which were totally destroyed beyond any hope of repair. 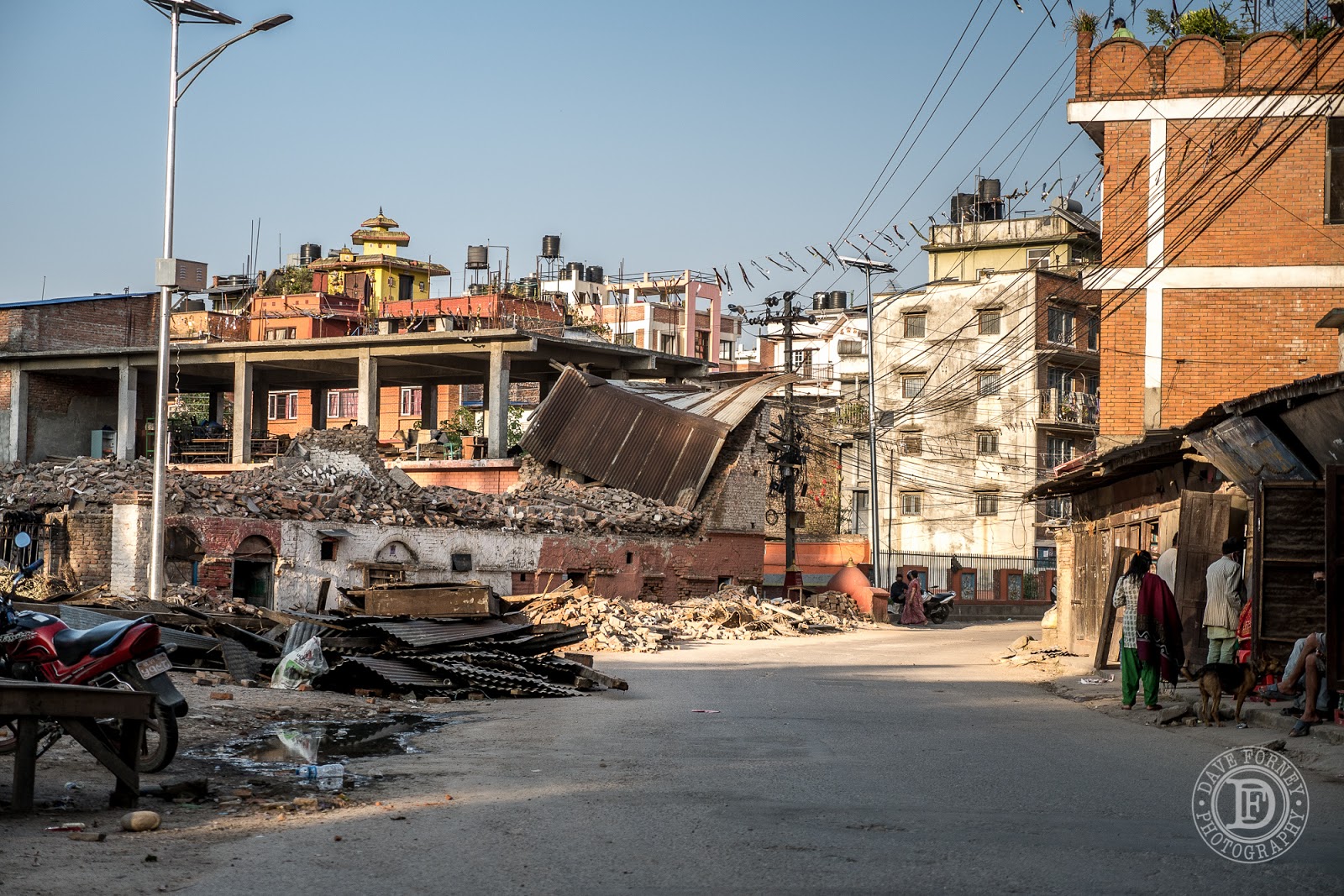 Daniel and I were preparing to join a flight. Here Daniel reviews the plan with Capt. Ashish, one of the Fishtail Air pilots, and the UK Medical team, before departure. 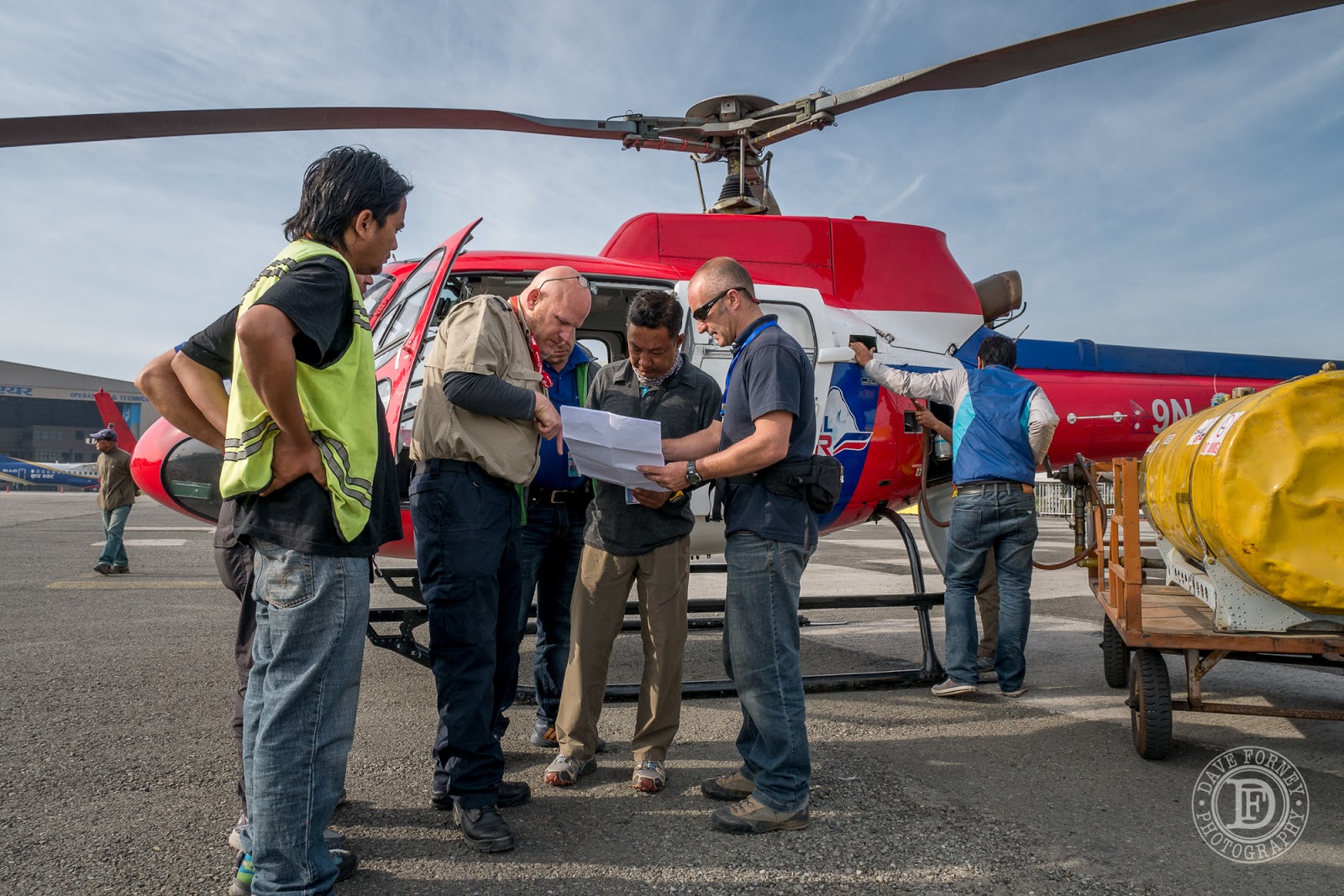 The further one flewinto the mountains, both the damage and the difficulty to access those places increased exponentially.  The location below was still accessible by road, albeit a difficult and long drive. 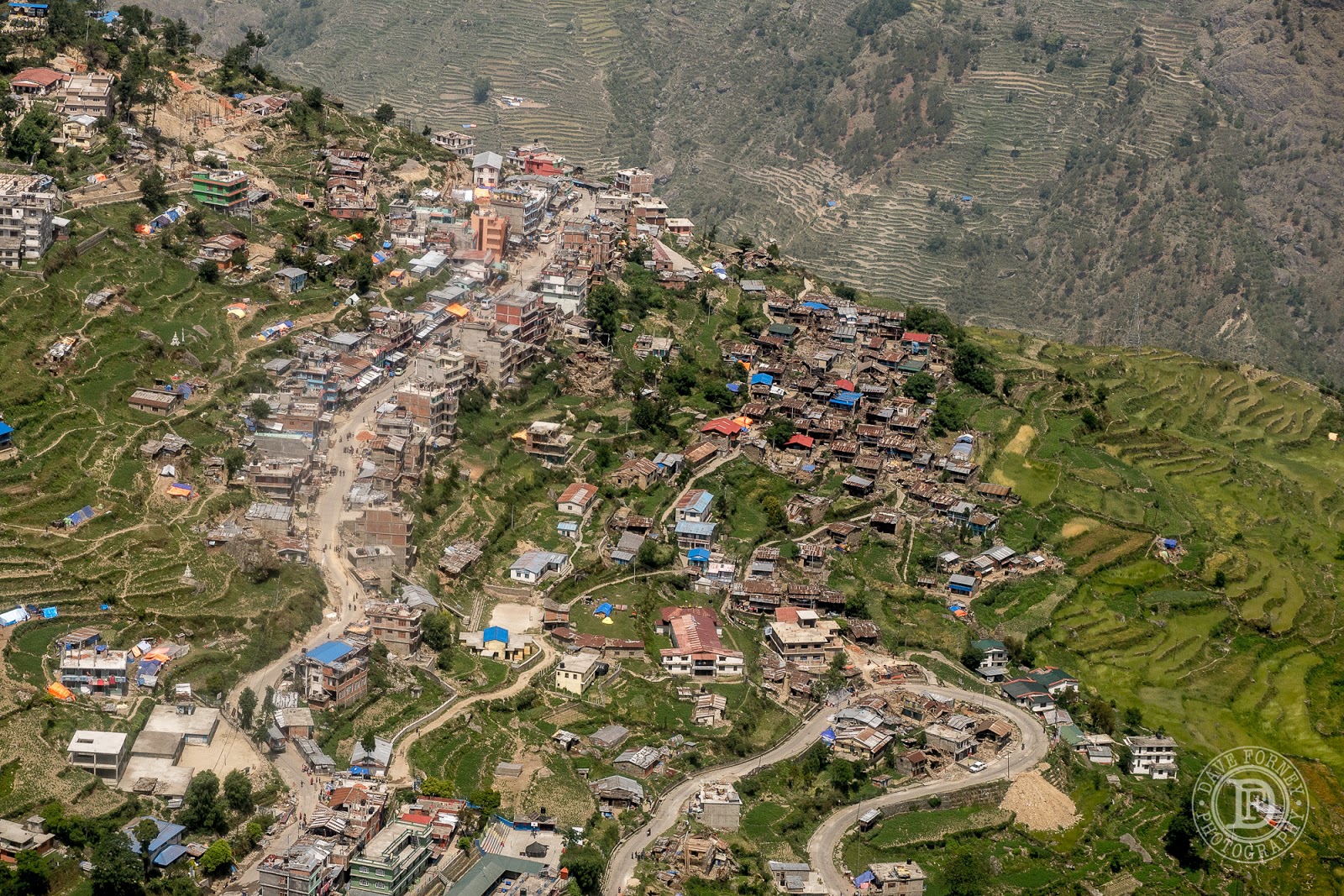 Further out the damage increased. 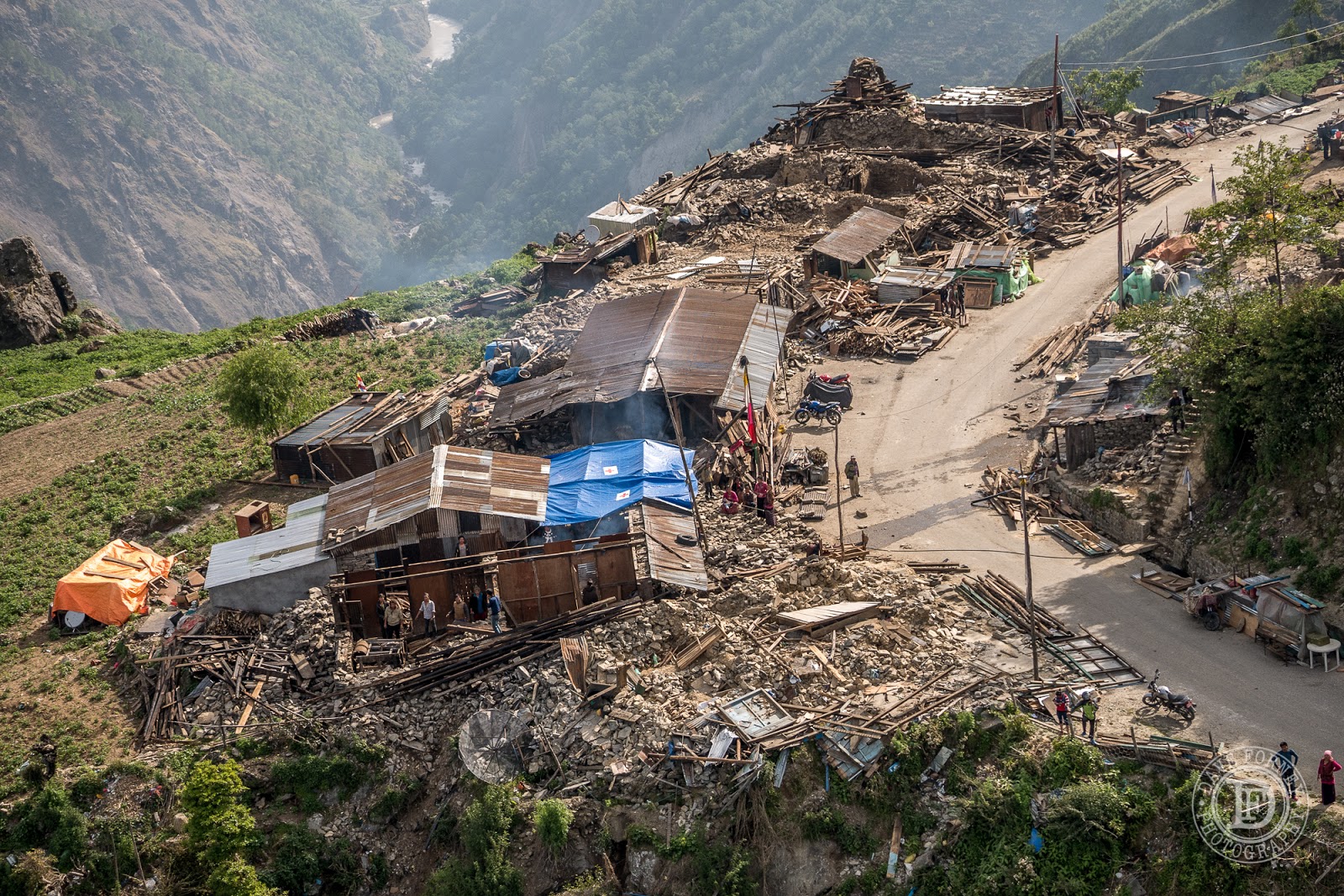 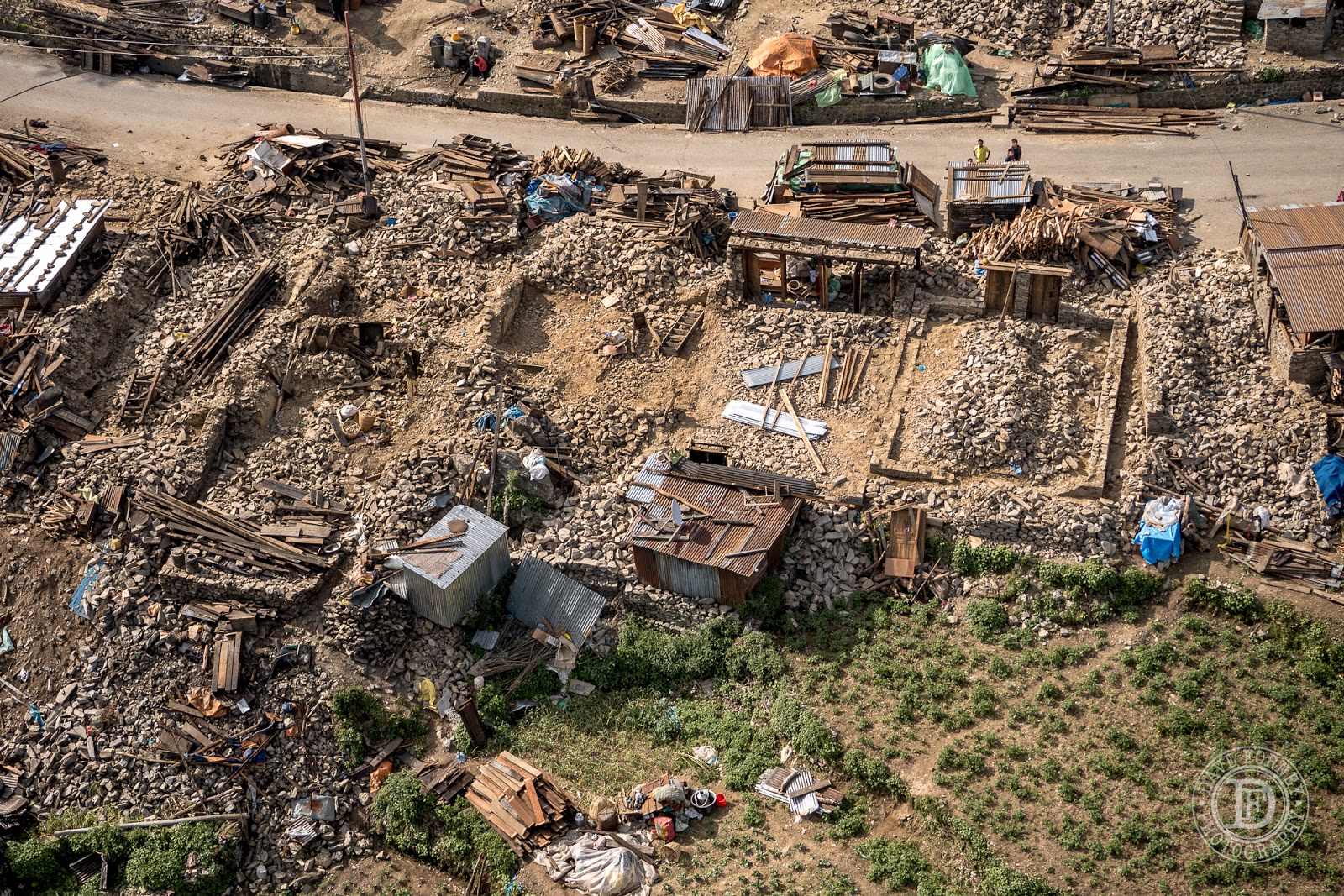 But we were flying only to locations that were deemed inaccessible overland.  Note the active landslide in the background. 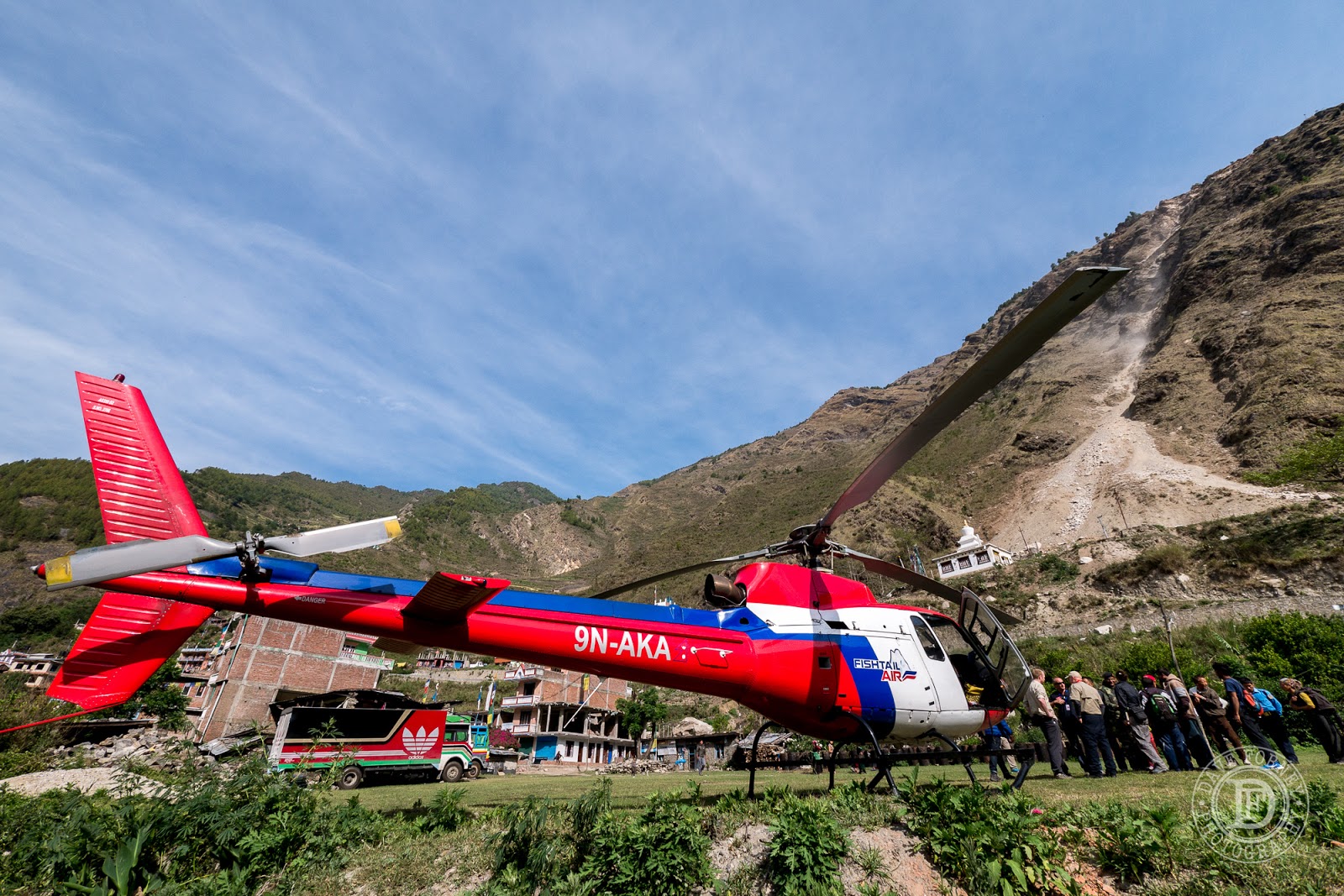 As we were discussing strategy for the medical team, there were numerous additional small landslides (some weren't too small).  Here, several local Nepalese look up at the mountain as large rocks came crashing down... 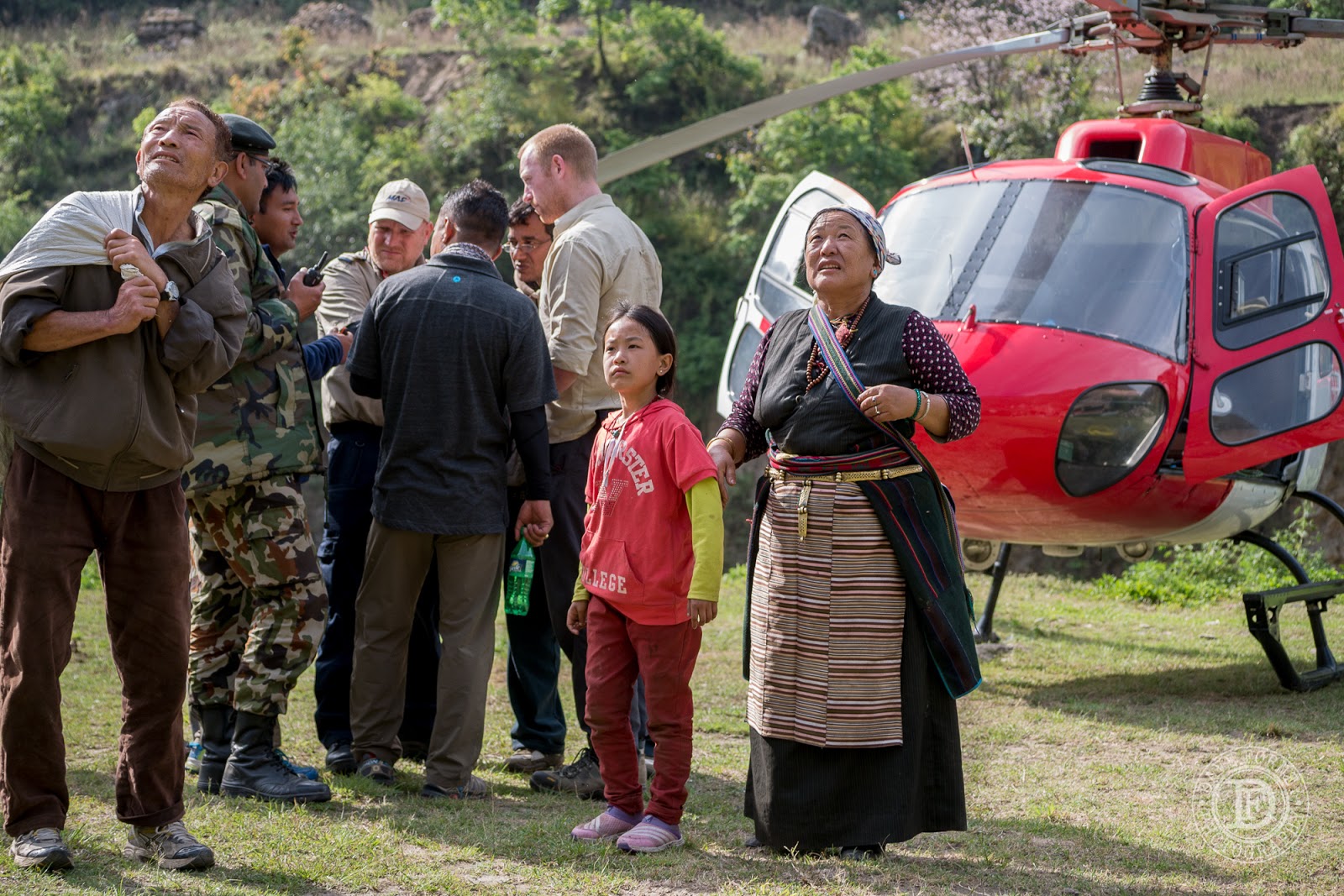 ...they sounded like canons going off as they tumbled down the mountain. 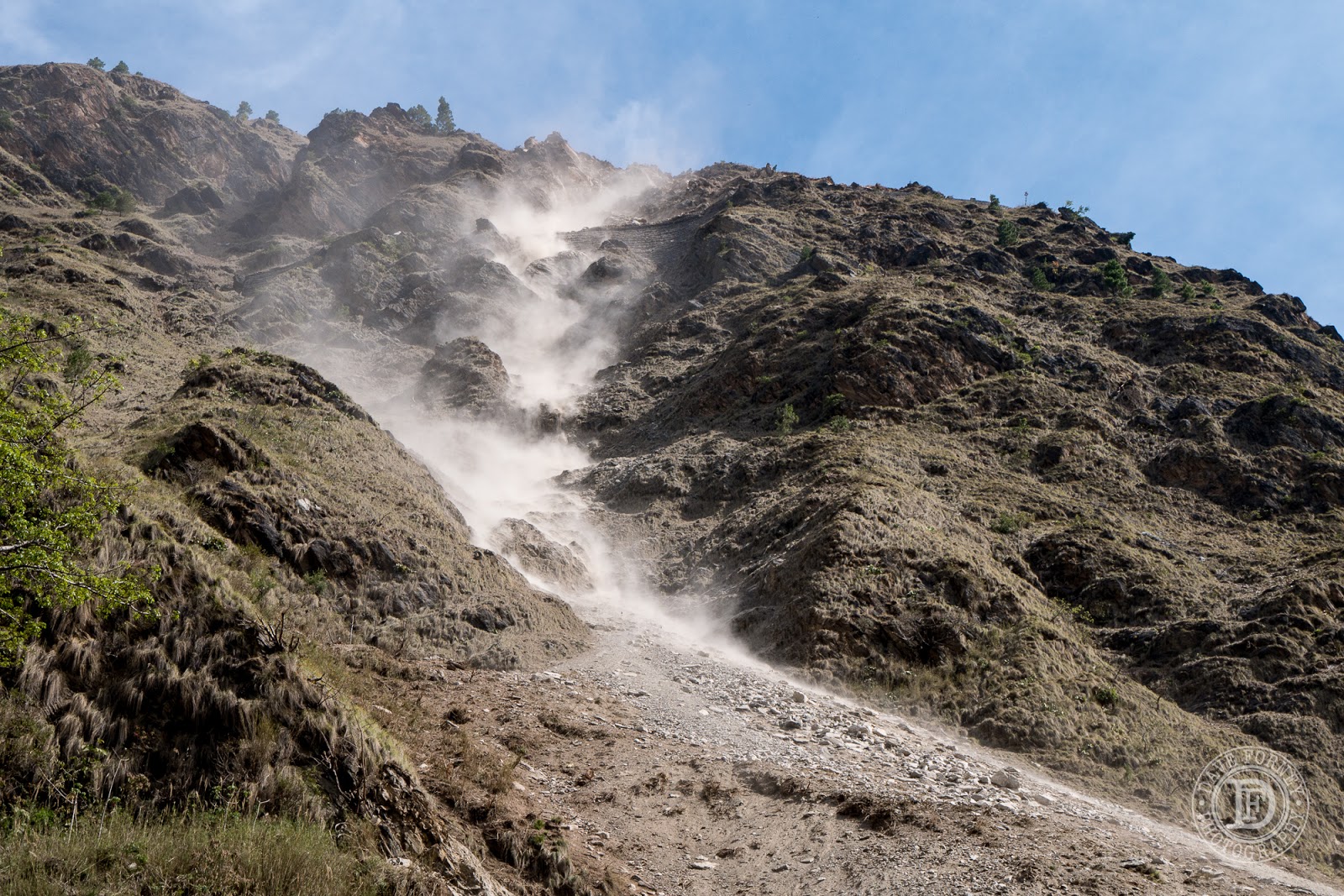 An aid worker runs out of the path of falling rocks. 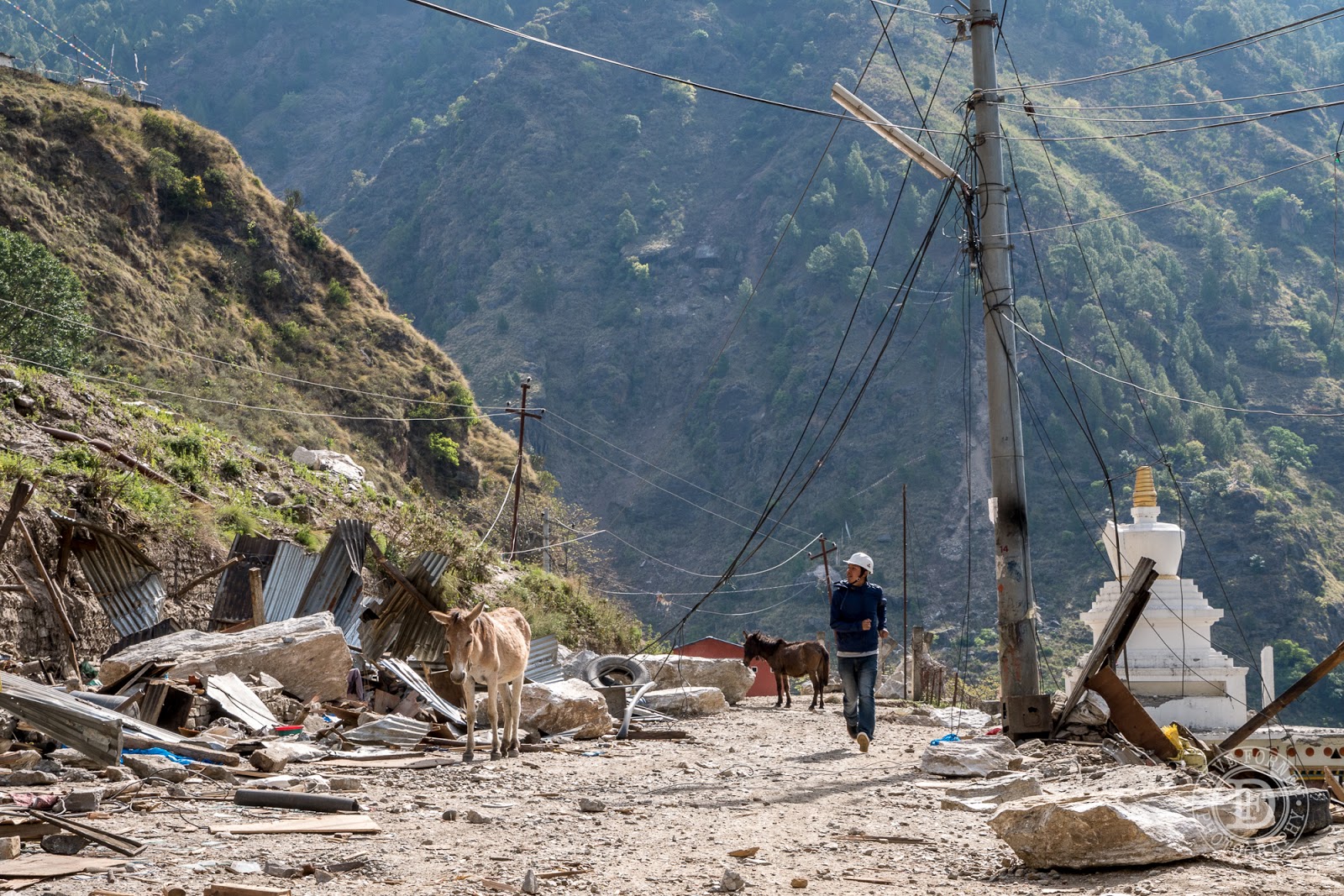 In the pictures above and below, you can see where houses and buildings used to stand. They were completely wiped out by the combination of the earthquake and the resulting rock slides, including a house-size bolder that plowed a path of destruction right through this area. 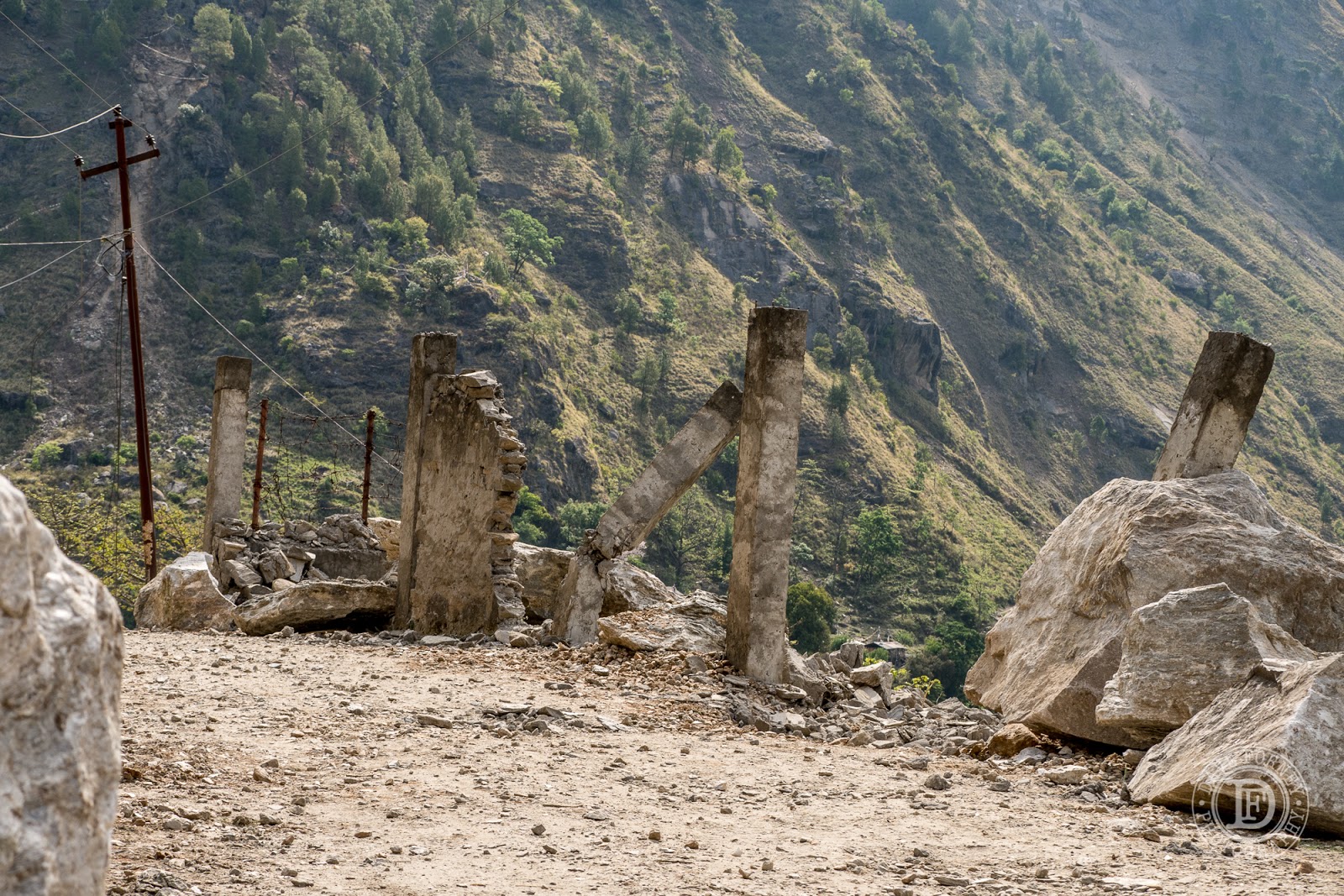 MAF saw a big need to help provide coordination in logistics behind the scenes for all of the NGOs trying to get helicopter flights out to the hardest hit and most remote regions of Nepal. 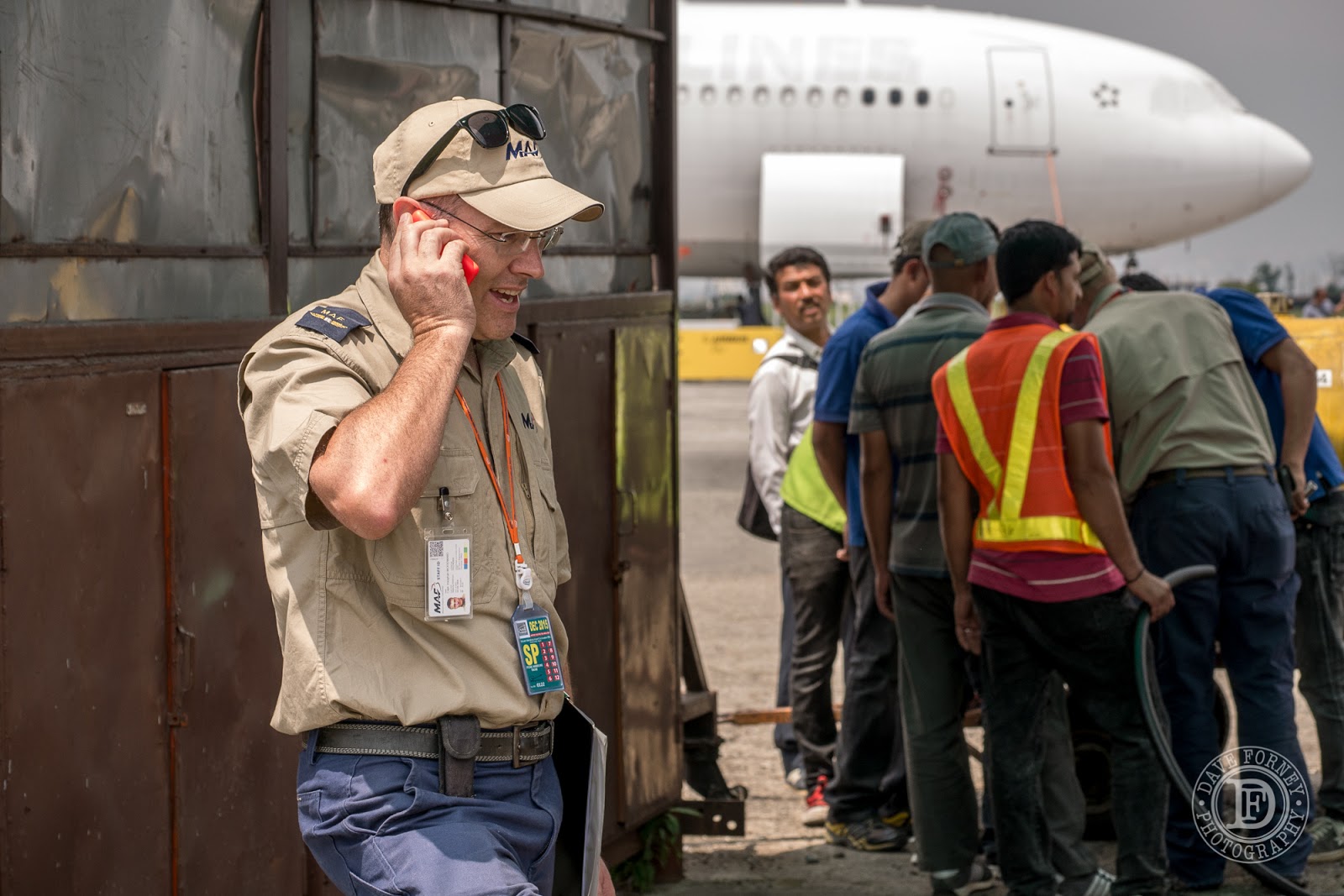 We worked together with Fishtail Air, a renowned local helicopter operator there in Kathmandu. 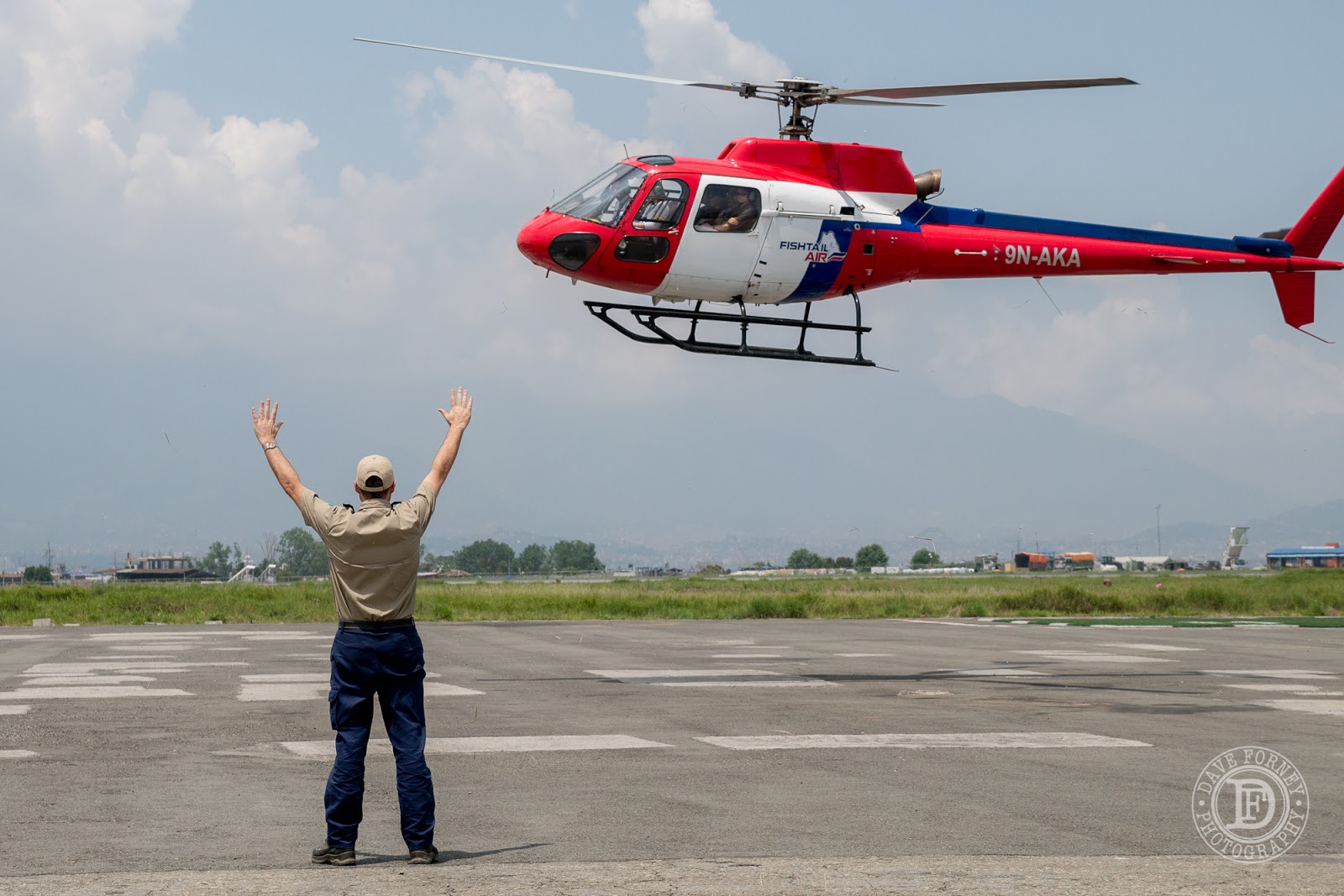 It was a real pleasure to work with such a dedicated and capable staff at Fishtail Air.  Together we provided many hundreds of critically needed flights in the first weeks of the disaster, and we responded quickly and efficiently in the aftermath of the second major quake that struck on May 12th. 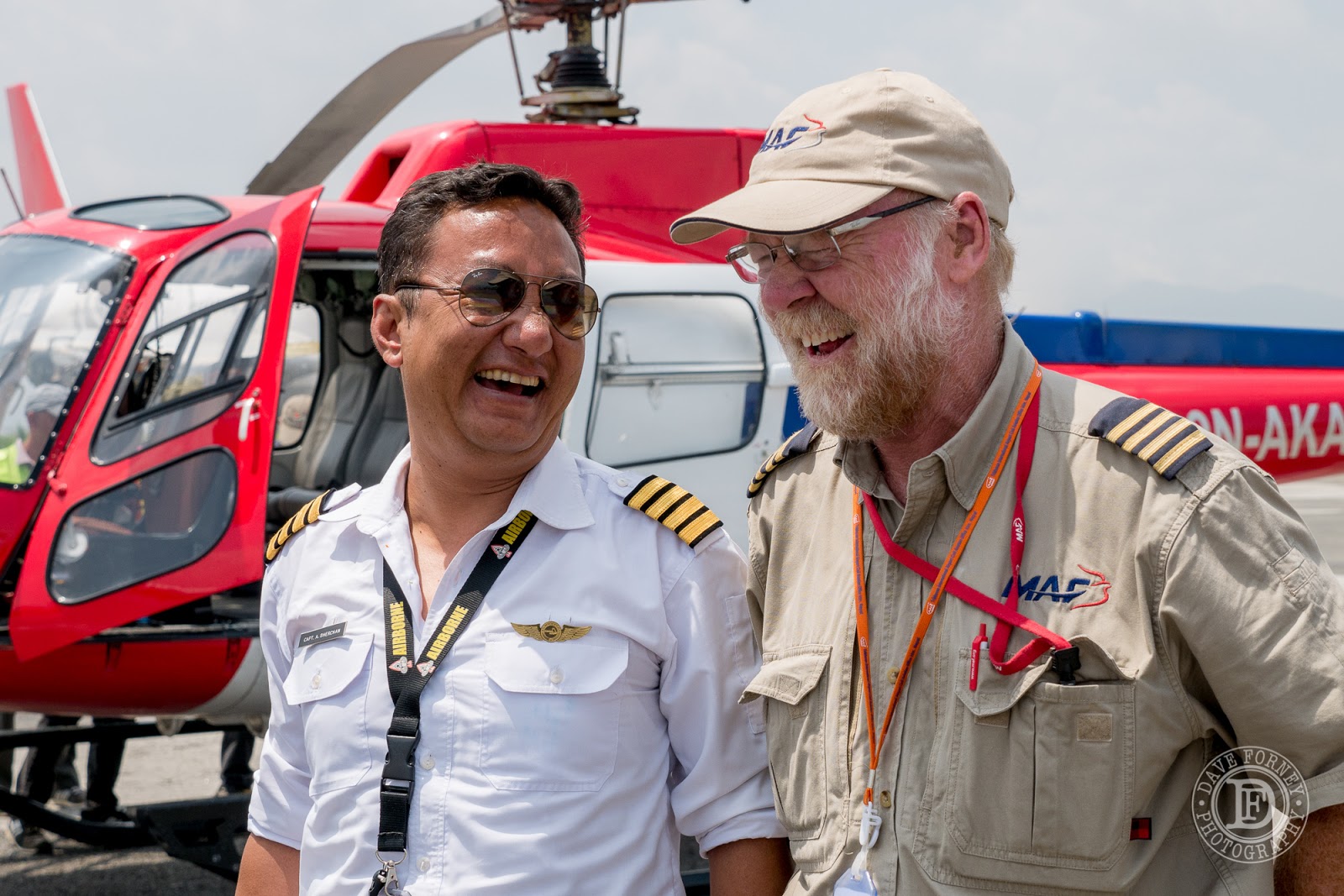 The team there continues to work hard to help the people of Nepal.  Please continue to pray for them.

Below is the story I wrote on the second day (actually it was very late at night) that I was there:

MAF BRINGS HOPE AND HELP to NEPAL
Tuesday, 05 May

Today, MAF helped facilitate several flights for a UK medical team to a couple of isolated villages deep in the hard-hit mountains of Northern Nepal. The team was too big for one load, so we split the load into two flights.  The bulk of the team and their gear rode on the first flight, meaning there was adequate space on the second flight for Daniel Juzi and me to ride along. Daniel needed to see the flight operations so he could finish the safety audit MAF is conducting of the operator, while I was looking to document, through photos, the critical needs that are out there, and why the helicopter assets we are facilitating are so vital to meeting those needs.

We departed from Kathmandu airport heading northwest towards the rugged, smoke and haze shrouded mountains to the North. The earthquake damage in Kathmandu city itself, and the immediate outlying areas, is obvious, but relatively minor when compared to the more remote locations.  Proceeding deeper into rugged foothills of the towering Himalayas, both the damage to the villages and the desperate needs of the people increased exponentially.

Within 10 minutes after departing Kathmandu, we could already see significant portions of small villages which had been turned to ruble on the edges of the steeply plunging mountain sides.  Yet, these people actually have much to be thankful for—although a slow and grueling journey, their villages, or what’s left of them, are still accessible by road from the city.  As a result, they’ve already received, and will continue to receive, significant relief and aid through various, large government entities and NGO’s.  Not so, the more remote and isolated villages further north and deeper in.

Indeed, there are many villages, far more decimated, that have yet to receive any aid at all.  Why?  Because no one can get to them. Many NGOs and like minded organization are standing by ready to help—fully equipped with supplies and personnel, but lacking one significant element. Transportation. Villages still reachable by road are being helped via land.  Villages cut off by road, but having larger, flat/clear areas, are being helped via heavy-lift military and government helicopters.  But the villages tucked into the deepest mountain canyons, and on the edges of the steepest slopes, and on the peaks of the highest ridges—these are some of the hardest hit villages.  Yet, until now, no has been providing the crucial link to get the desperately needed aid workers and relief supplies into these desperate people.

That’s where MAF comes in.  Managing the logistics, bookings, and facilitation of two, very highly-capable helicopters operated by Fishtail Air, with some of the most experienced crew in Nepal, we are able to take relief workers directly into the places where the help is most desperately needed—where no one else is going.  We’re doing what we do best—using aircraft to transform the lives of the world’s most isolated people in need.

Sadly, for some, no help is needed.  One village we saw today was completely wiped out—totally buried under untold tons of rock and earth.  But there are many who have suffered extensively, and have been waiting…and waiting…and waiting for help.  Help is finally coming!

When we arrived at the first location today, the damage was extensive.  The helicopter was perched on the edge of a small grassy area, it’s tail pointing out over a precarious drop to a raging, glacial-melt river below, it’s nose facing the destruction of part of a small village tucked into the base of a steep mountain.  Many houses were extensively damaged or destroyed by the quake.  But some were completely pulverized by the massive rock slide which cut loose from the towering cliffs above.  As the medical team evaluated the needs here, there was a continual cloud of dust and debris rising from the scarred mountain face a thousand feet above. Occasionally we could hear distinct crackling pops that sounded like distant machine gun fire as larger boulders lost their grip high up on the mountain, bouncing down the steep face and bringing loads of small rocks with them, getting louder all the time as they got closer and closer.  Just off to the side lay a house-size boulder that had carved a massive path down the side of the mountain to it’s new resting place, and taking everything in its path along the way.

Yet even here, the people with a humble and gracious honesty told us they were not the worst off.  The medical team had brought along a local translator from “Save the Children”.  With his help, these villagers directed the team to other nearby, villages, even harder hit and more isolated.  It was to one of these locations that the helicopter transported the doctors.  Throughout the rest of they day they were able to treat the wounded, and at the end of the day bring two patients back with them to the city hospital.

None of this would have been possible without the helicopter.  These areas are completely cutoff by land.  We saw literally dozens of landslides, many still active with falling rock and debris.  The road was severed in half in many locations.  It will be weeks if not months before these already precarious roads are finally passable again.  And in the meantime, none of the other large, rotor wing air assets available here in Kathmandu are able to get into these very tight locations.  It takes a specialized helicopter and crew to safely negotiate this terrain and operate to/from these very tight, often high-altitude, landing zones.

That’s exactly why MAF is coordinating relief flights through Fishtail Air, for dozens of NGOs.  Fishtail Air is a local flight team that does it best in these remote parts of Nepal.  These are the very ones that routinely fly people into the highest, most rugged mountains on planet earth.  They’ve done the highest-altitude mountain rescue in the world. They’re the only ones here certified for sling loads and long line ops.  With their reputation and long-time experience in operating helicopters into these toughest of locations, combined with MAF’s reputation and long-time experience in coordinating transportation logistics efficiently and effectively in disaster relief efforts throughout the world, we’re able to provide the crucial transportation link that’s been missing—that will allow the aid and relief workers to bring help to the most desperate, and most isolated in the entire Nepali Earthquake relief effort.  I’m sure this will be just one of many stories where lives were changed and impacted because of the efforts facilities through MAF, and made possible through the prayers and generosity of countless people around the world.
Posted by Dave at 4:30 PM