Last week I was based out of Juba, (the capital city of South Sudan,) flying for MAF South Sudan. Here’s a shot of Juba that I took last February, when it was still dry season. Now that it’s rainy season it’s actually quite green. The airstrip is in the upper left corner of the picture, running across the top from left to right. 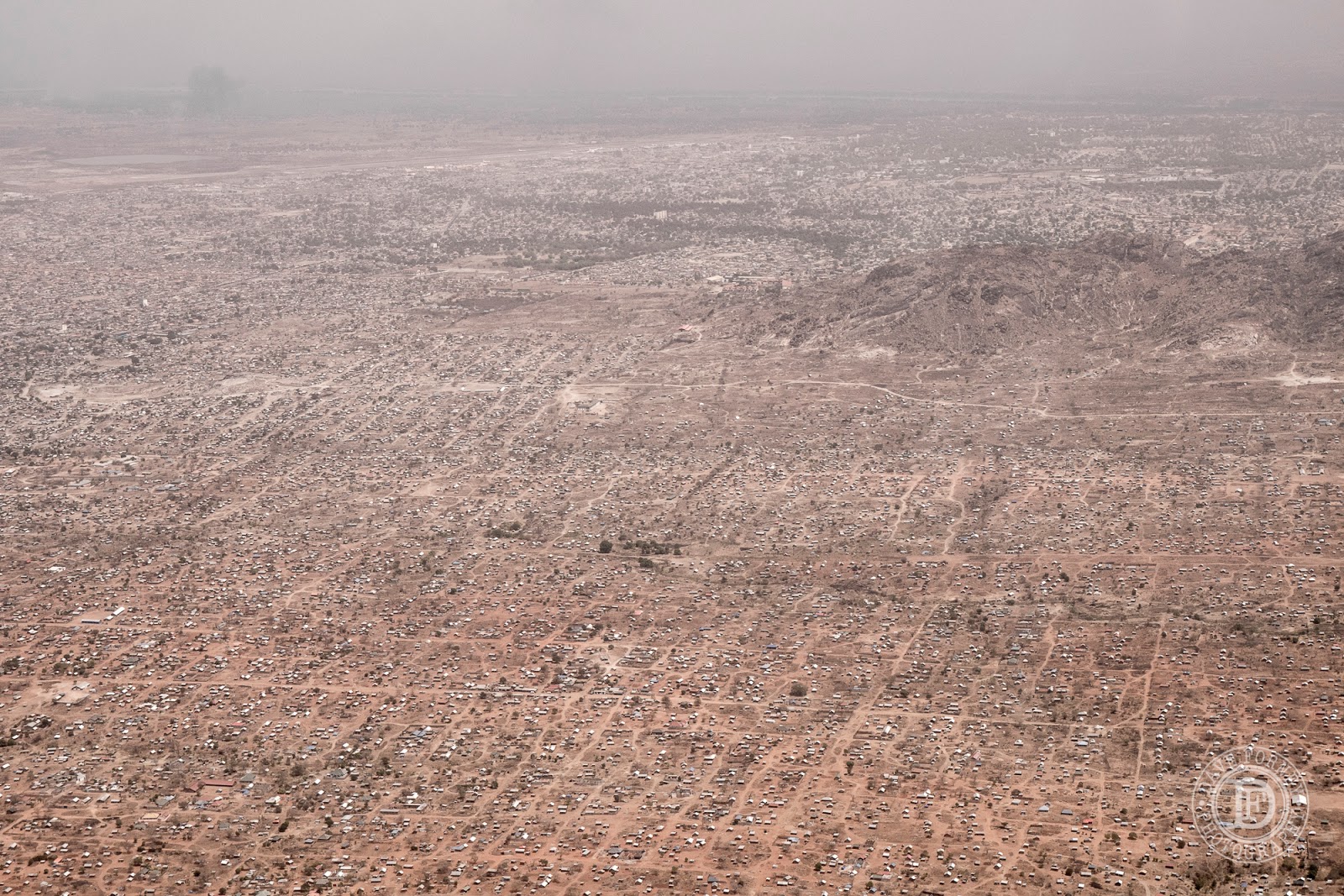 South Sudan is the youngest country in the world, and has been struggling with fighting and unrest since December 2013. In July there was renewed fighting in Juba and elsewhere that left several hundred dead in the capital and hundreds of thousands fleeing throughout the country. Since then, the situation in Juba has returned to a tense ‘calm.’ But throughout the country many are in very desperate situations. MAF is serving a number of key missions and humanitarian agencies who are working in many of these remote locations where the needs are dire and the South Sudanese are suffering. Below is a picture of the plane (Lima Delta Romeo) that I flew up to South Sudan for the week... although this shot was actually taken over Karamoja, Uganda last February. On Monday I flew first to Yei, about 80 miles southwest of Juba. The situation in Yei is quite desperate. There has been recent fighting here, and a very recent UNHCR report says that up to 100,000 people are trapped in Yei, unable to get out of the area, yet unable to get needed food and supplies. I was able to fly a group of teenage orphans out of Yei, up to Juba, for their safety and wellbeing. There’s more to this story, but we’ll just leave it there. Please keep praying for the people and situation in Yei, and throughout South Sudan. 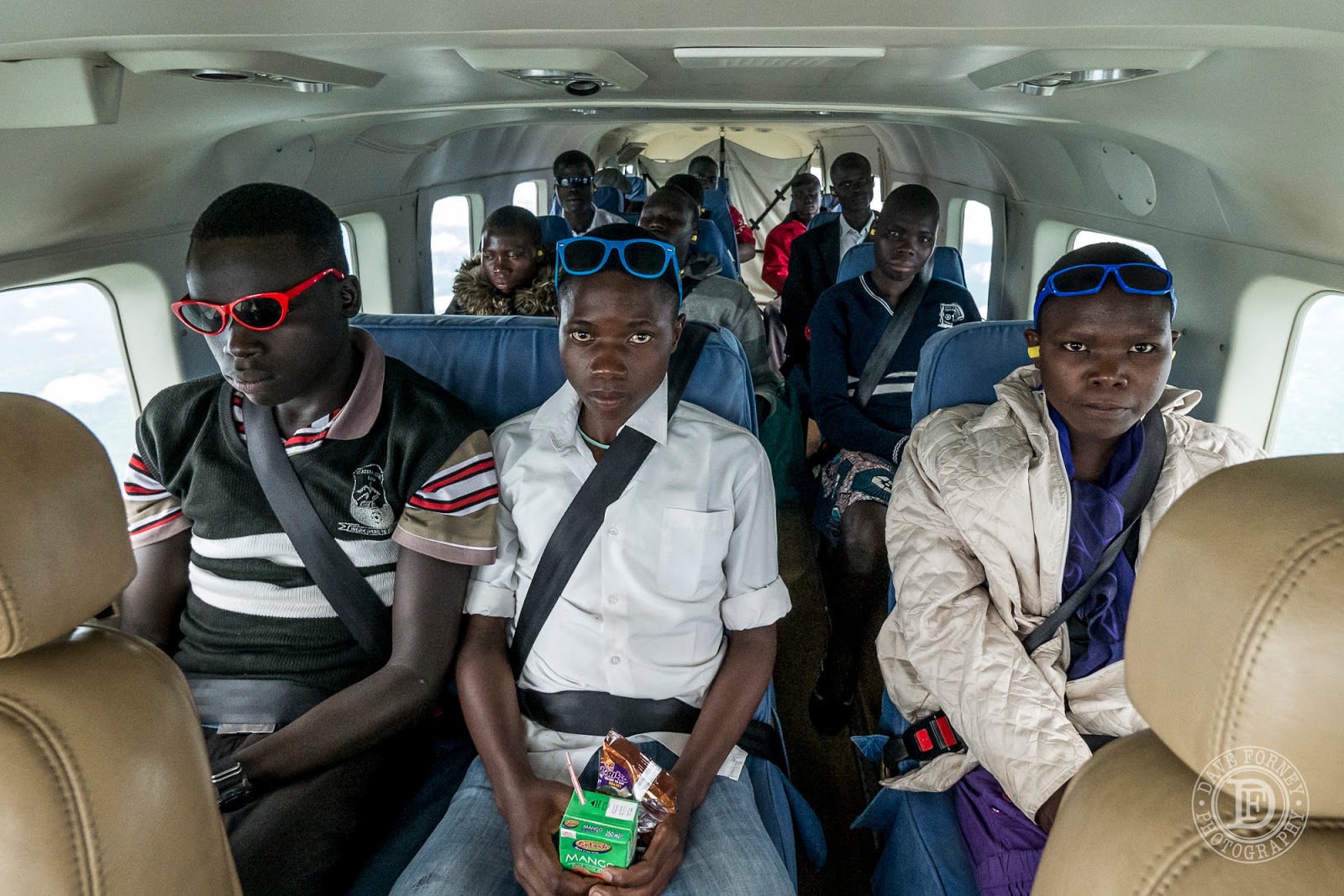 Since 2013 more than one million refugees have fled South Sudan. In addition, more than 1.6 million are internally displaced within South Sudan, which means that approximately 20% of the entire population of the country have become homeless since the fighting began in December 2013.  Since the renewed fighting in July there has been an increase in people trying to leave, with hundreds of thousands fleeing to Uganda. Uganda hosts more South Sudanese Refugees than any other country. Adjumani, in northern Uganda, is right at the center of all of this activity. Refugees are being settled in large camps like the one pictured below. I’ve seen many other refugee camps around the world, and these are actually quite nice by comparison. Each family unit (mostly women and children) get a small plot of land for a garden surrounding their hut. You can see these in the photo, each one outlined by a footpath. There are plenty of bore holes provided (water wells with hand pumps) and schools and clinics. Most of the people who call these camps ‘home’ have suffered in unimaginable ways. Their future must seem bleak, without much to hope for. Yet, you can often see them smiling and thankful for the most basic of things in these camps—shelter, food, water, education, and healthcare, all without fearing for their lives. For them, that's a drastic improvement! There are many missions and aid agencies working with and among these dear people, helping them with everything from basic physical needs to trauma counseling.

You may remember that just over just over a year and a half ago (March 2015) I went up to Adjumani to survey the site of an old, long-overgrown airstrip there, that hadn't been used in decades and had totally vanished into the bush. MAF had been asked by a group of missions and NGOs to help assess the possibility of re-opening that old strip, because of the vast number of refugees entering the area, and the number of agencies working among them there. In December of that year (2015) I had the privilege of doing the first landing on that new and beautiful murram (red dirt) strip, and it officially opened one month later in January of this year. If you missed those pics, and that story, you can check it out here-- scroll down till you find the photo of me shaking hands with officials in front of the plane. Shortly thereafter I had the opportunity to accompany Tutapona, one of the fantastic organizations working among the refugees in Adjumani, on a visit to several of the camps. If you missed my posts related to that visit, you can check them out here: Adjumani 1 and Adjumani 2. Adjumani has quickly become one of the most frequently flown-to strips for MAF in Uganda. We typically fly there three to five times per week, serving a wide variety of agencies working directly with the hundreds of thousands of South Sudanese Refugees who have been settled in the camps there. Among the other significant flights I did last week, I was able to pick up a young boy, who had broken his arm, quite severely, playing football (soccer). He needed to get to Juba for medical care. The trip overland, via 4x4 would have taken all day and been extremely painful--bumping and jolting non-stop. More significantly, it would have been fraught with risk and danger--a result of the current security situation. By comparison, the flight on MAF was a mere 30 minutes--safe, comfortable, and smooth. I was able to take along three of our MAF South Sudan employees, and they were all smiles the whole time, totally loving the opportunity to have a ride in the airplane, and to see the other side of the MAF operations. Just in case it's not totally obvious, they are the ones in the bright yellow safety vests below. It takes an extraordinary amount of paperwork, clearances, etc. to dispatch a plane in East Africa, but especially in Juba, so we are very thankful for the many MAF staff, like these, who work behind the scenes to make all of this happen. 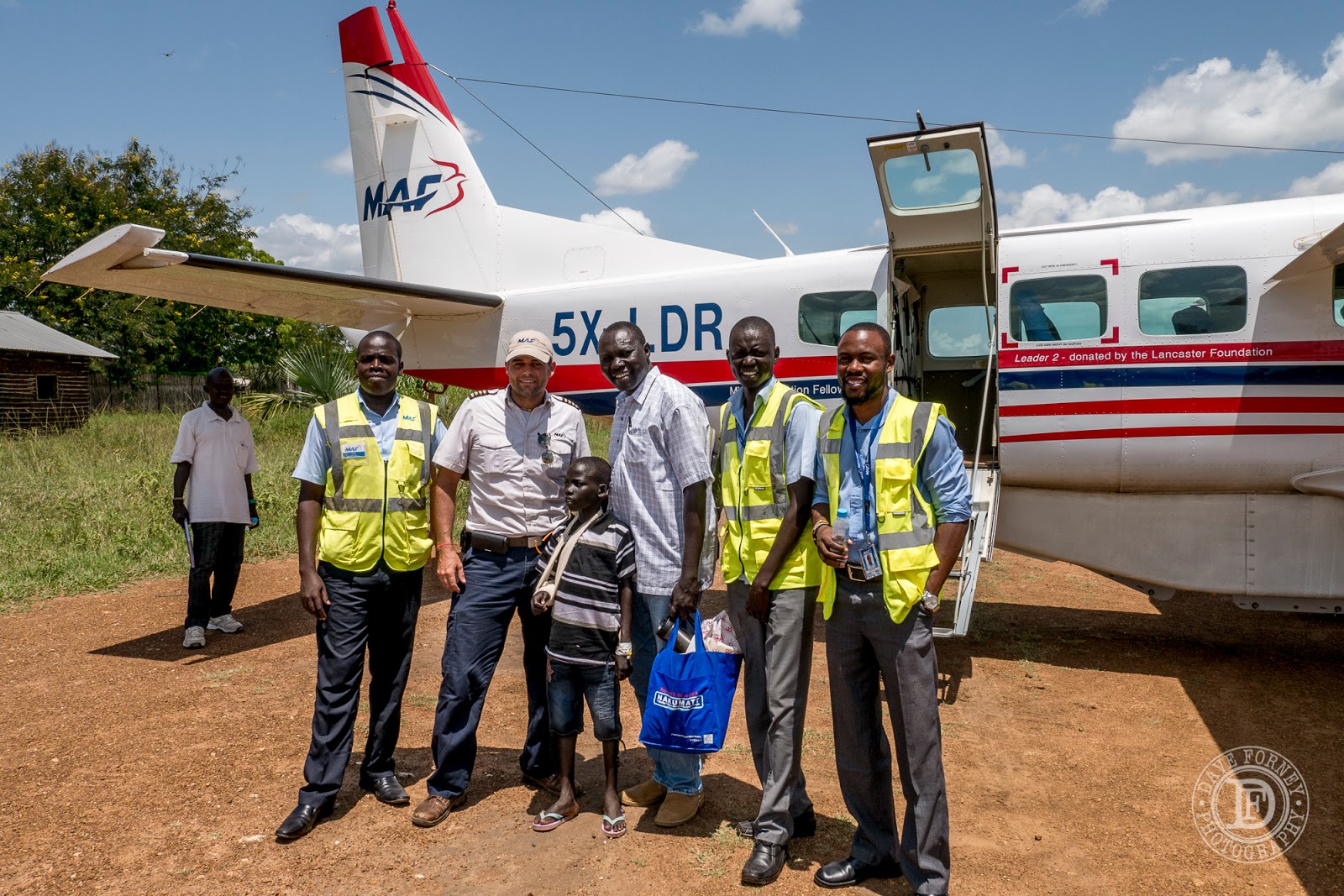 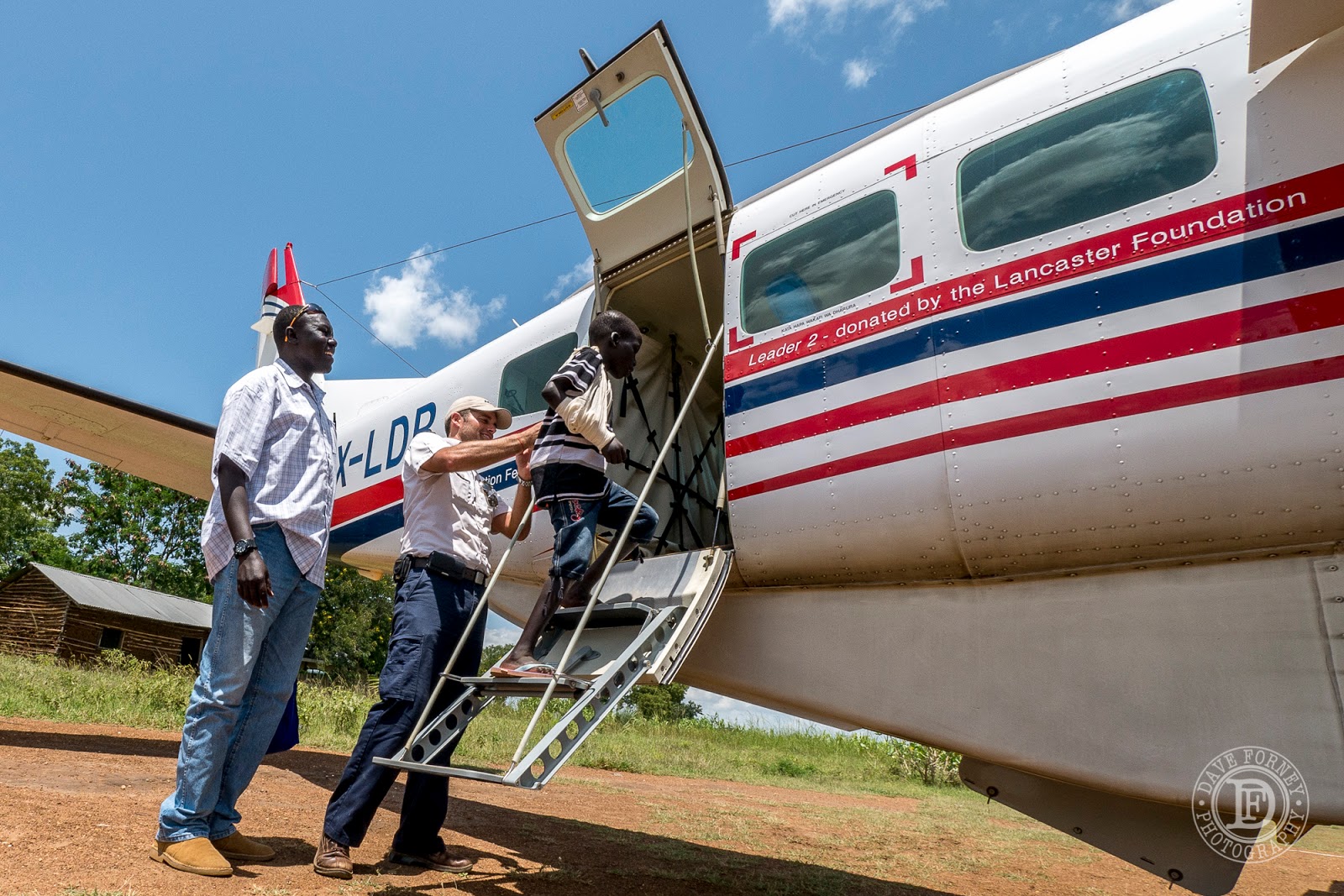 The weather last week in South Sudan was often quite challenging. There were massive storms and widespread rain and low clouds much of the time. At times I wandered if we would be better of with a float plane, or even a boat. Haha. 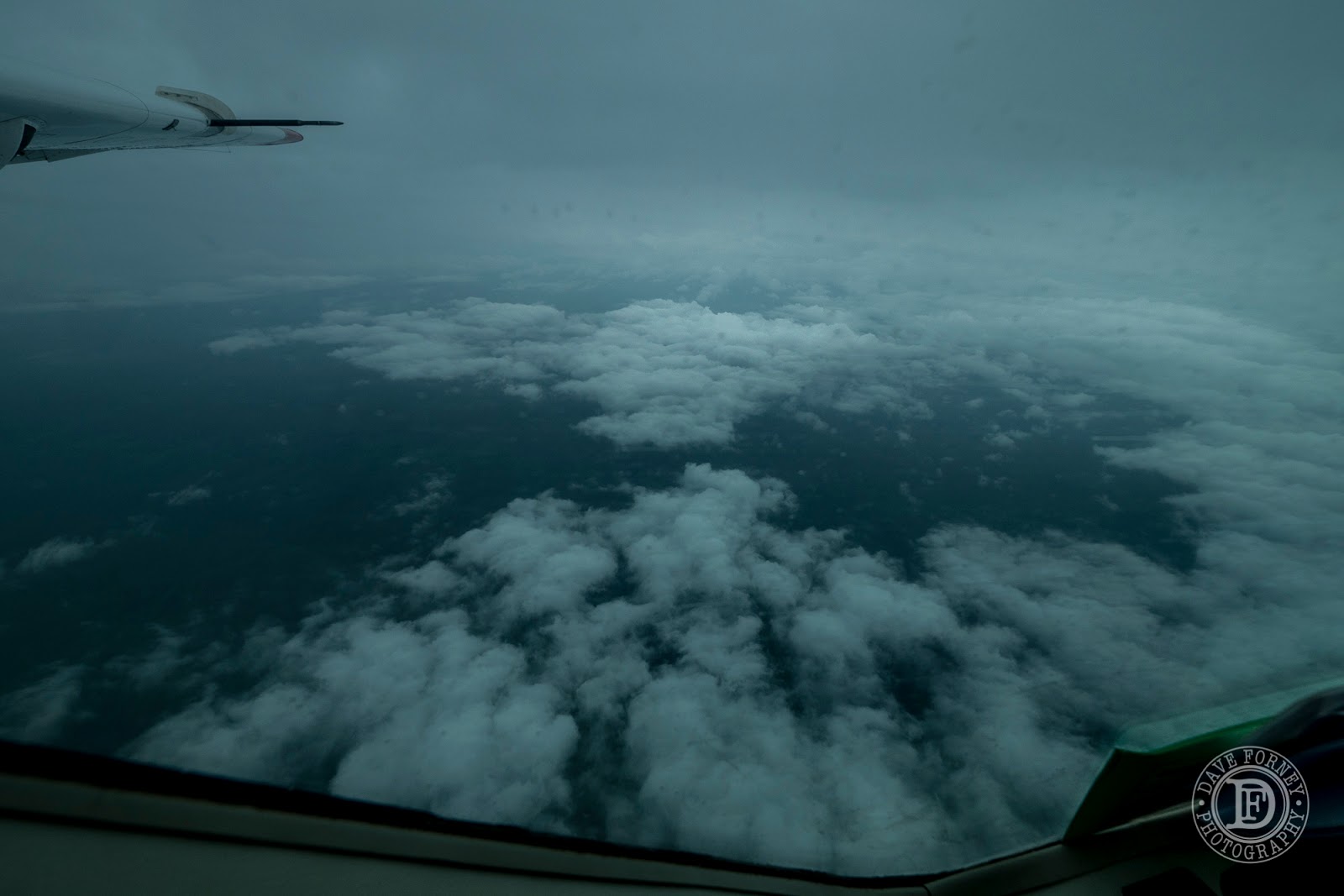 But it wasn’t all nasty. There were a few days when we had gorgeous weather. When the skies did finally clear, they were beautiful and blue—the rain having cleaned all the dust out of the air. 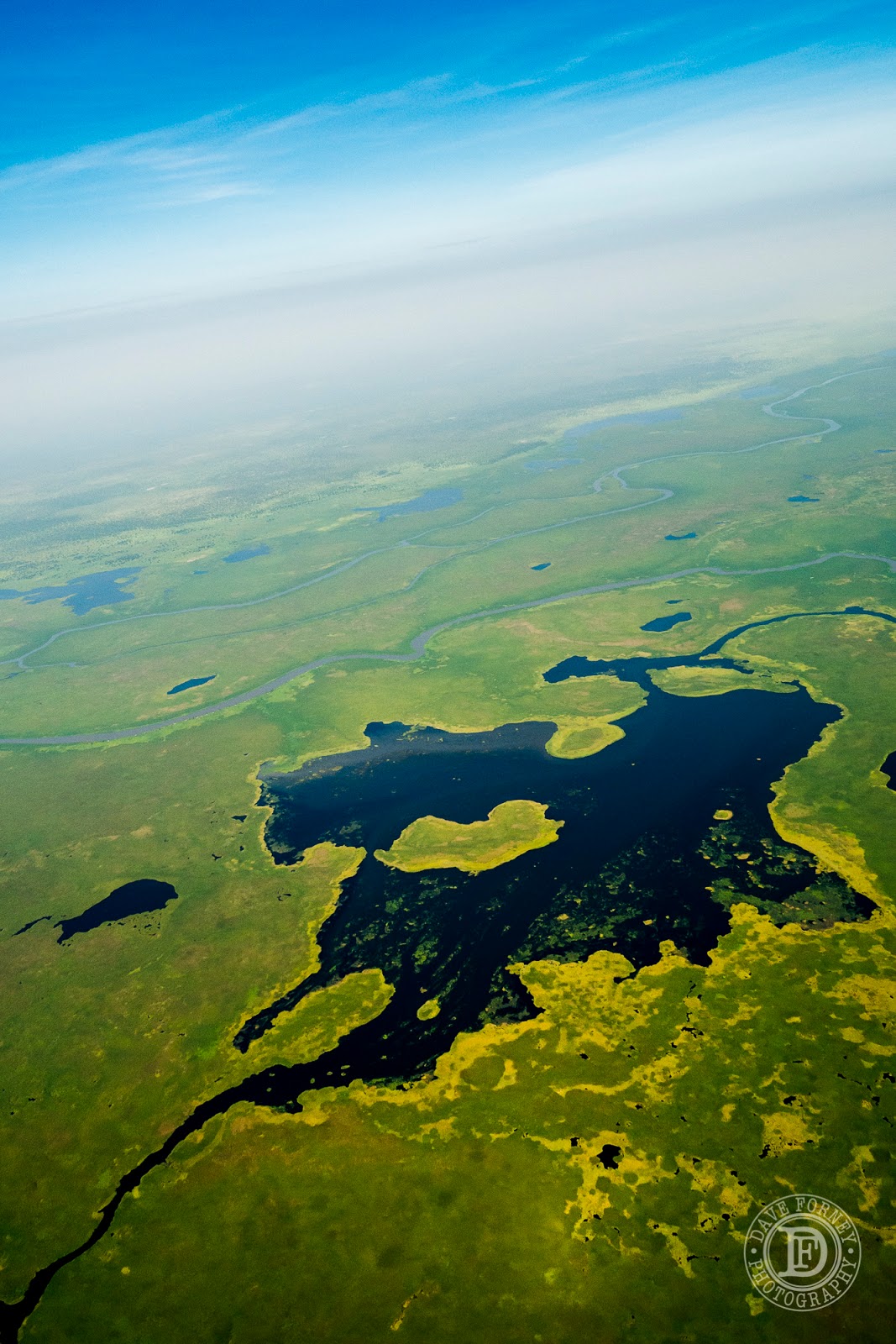 I did a couple of flights for Tearfund and Medair, to some distant locations up North. One of those flights took me near the Southern end of the Sudd, where the White Nile's Bahr al-Jabal section turns the mighty river into a seemingly endless, wide, meandering maze of swamps and floating vegetation, with random pockets of open water. It’s beautiful from 10,000 feet above, but can you imagine trying to navigate through this mess in a boat? The passages are constantly shifting because much of the vegetation is floating. Still, when I looked down from this height I could see a few small huts here and there, where people are making their living and surviving here. In the shot below you can see some of these huts on the bend of the brownish rivulet snaking around at the lower, right corner. 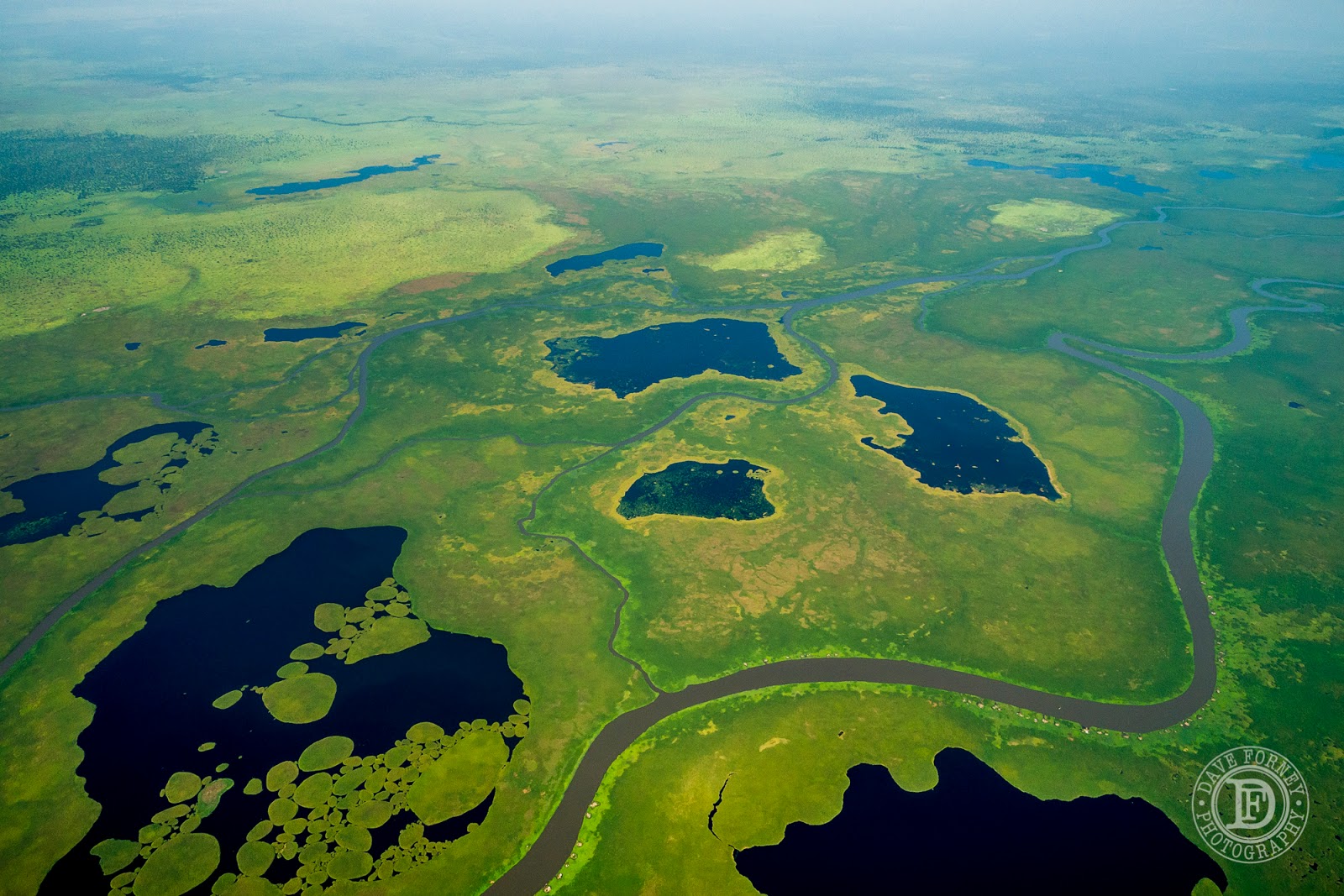 Wow! thanks for doing this for these people. I often think about these refugees.
Sandy in the UK
PS our Harvest Offering is going to MAF this month. We are doing the 'Fry for Life' for our Harvest meal after church on the 16th. Or as we call it, a Full English Breakfast. God Bless!

Thanks for the comment Sandy. And thanks for what you and your church do to support the ministry of MAF. I love the 'Fry for Life' idea. Wish I could be there to partake in the Full English Breakfast. :-)