Trekking With My Son -- The White Clouds Wilderness Adventure (Part 2)

Here's a shot that sort of captures the epic wilderness beauty we enjoyed during our little adventure, though none of the photos actually really do it justice. That's Hudson coming up over the hill in the foreground, with 11,815' Castle Peak in the background. We considered many options for our trek, but thanks to great advice from our friend, Patti Kilgore, who has hiked many of the most amazing trails in the American West, we finally decided to do the White Cloud Peaks Loop in the Sawtooth Mountains of Idaho. That was a great choice! 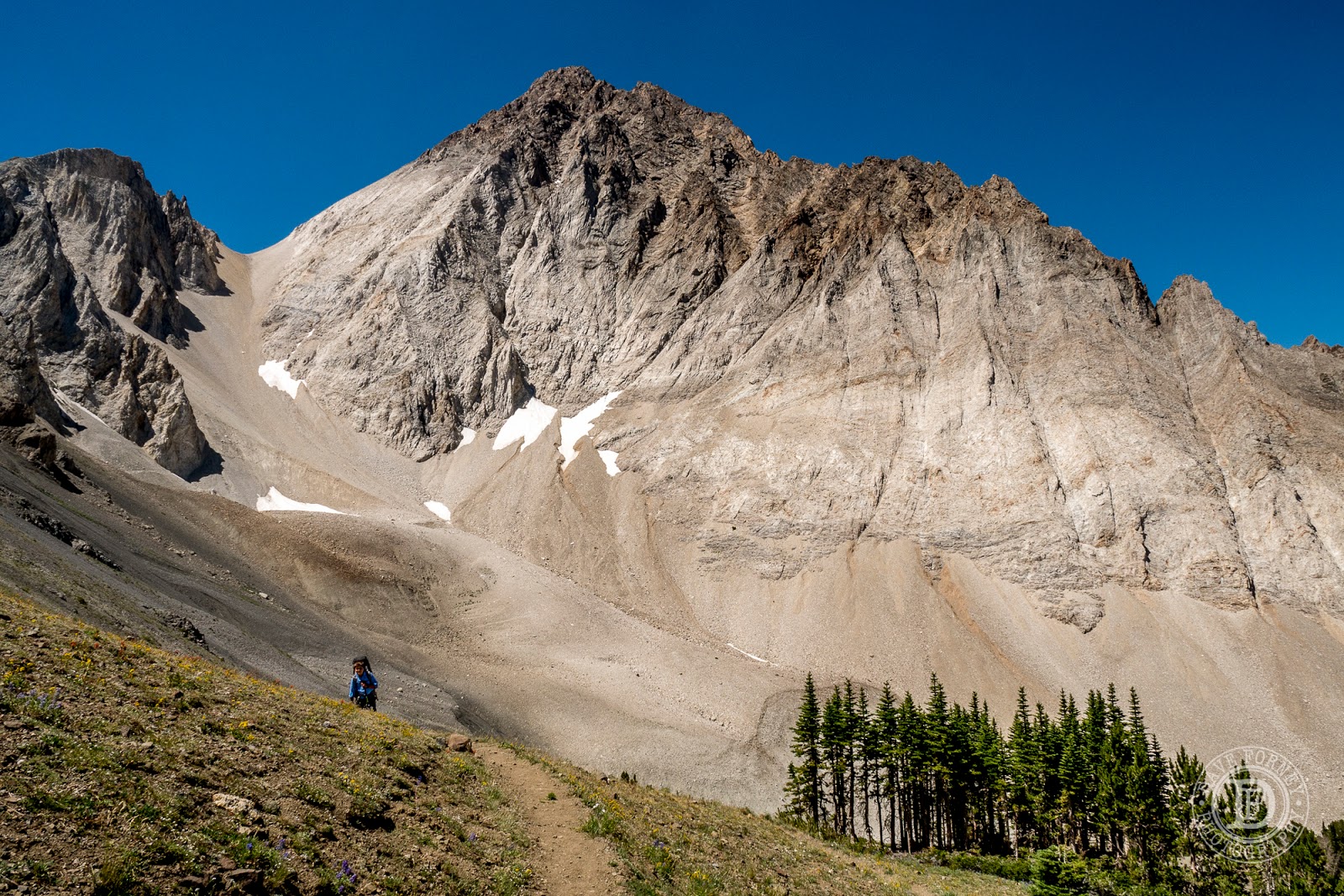 I was really proud of Hudson. He carried his own pack all the way, and it was not light. I do enjoy doing more of the 'ultra-light' approach when it's just me, or me and a few guys, but this was definitely not that. With just the two of us, I opted to bring some extra emergency gear in case something went wrong. We also brought fishing poles and tackle to take advantage of the legendary trout lakes in that area, and I brought my mirror-less camera and three lenses, as well as extra batteries, and an iPhone for video, along with a large charging battery for that. We also had to carry all of our food and cooking fuel for six days, a water filter, bear spray, tent, sleeping bags, bear bags, warm weather gear, etc. etc.  When it was all said and done, Hudson's pack weighed about 35 lbs at the start, and mine was close to 75 lbs. They got a bit lighter as we ate food and burned fuel. :-) 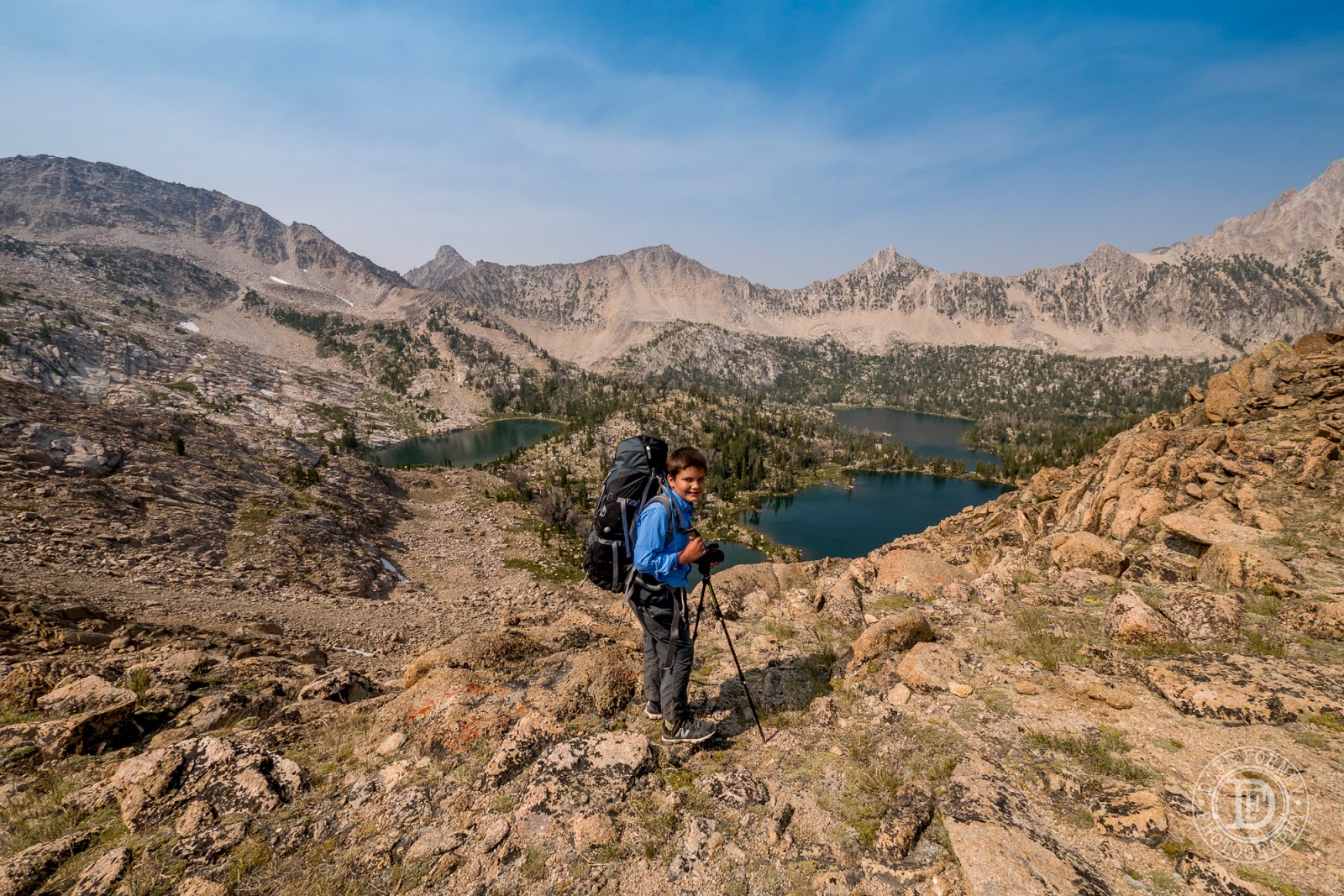 Here we are enjoying the epic view from the top of the 10,220' pass above Born Lakes. 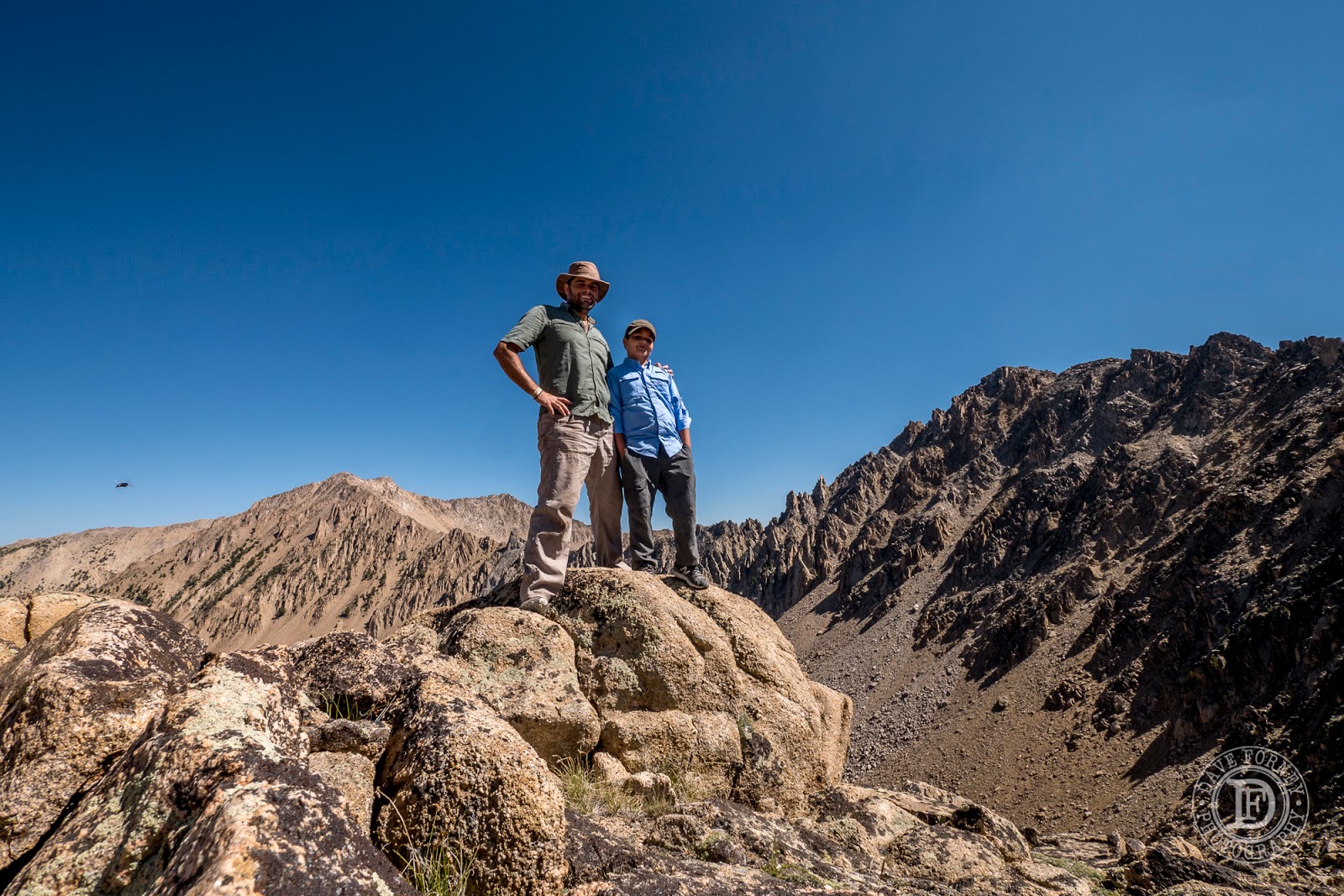 Below, Hudson makes his way up the pass above Ants Basin. This was a fun, long, tough day. We left Ants Basin early in the morning heading up and over the pass on our way towards the Four Lakes Basin, then past Quiet Lake, up past Scree and Shallow Lake, and eventually Boulder Chain Lakes area. Most of the day we were off-trail, as the old trail over Devils Staircase was partially destroyed some years ago, and it is extremely steep and a bit technical. I figured that with our heavy packs the 'old route' would have been a bit dangerous, so we opted for the much longer, off-trail route, which offered plenty of incredible scenery, as well as it's own challenges. 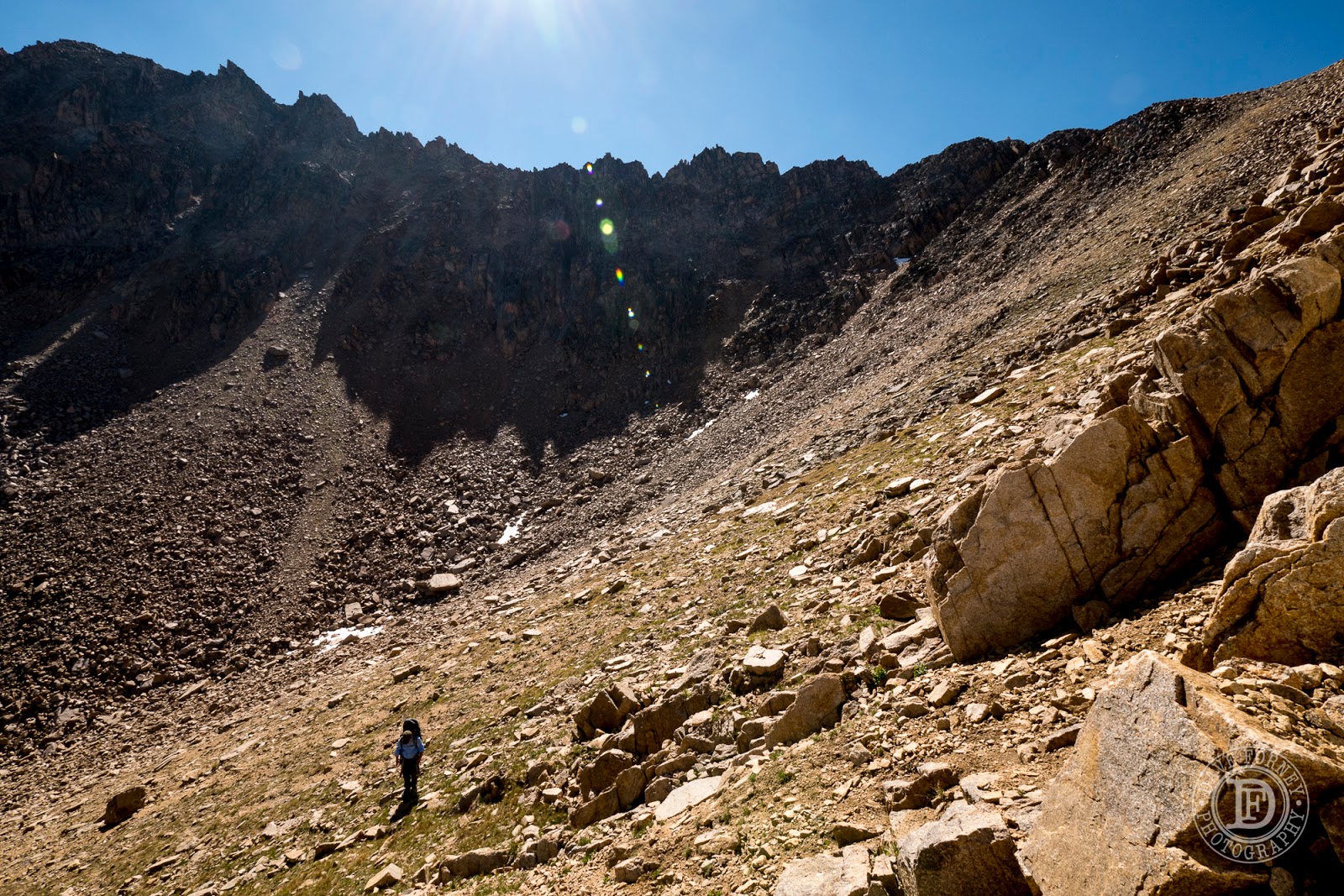 Here is a shot of Hudson walking along one of the Four Lakes, after descending down from the pass I mentioned earlier. There were so many trout in these lakes, and the water was so incredibly clear, you could see them swimming everywhere. We would have loved to enjoy some fishing here, but we had a LOT of ground to cover this day, and the terrain ahead was quite rugged, and promised to be challenging, so we kept going. 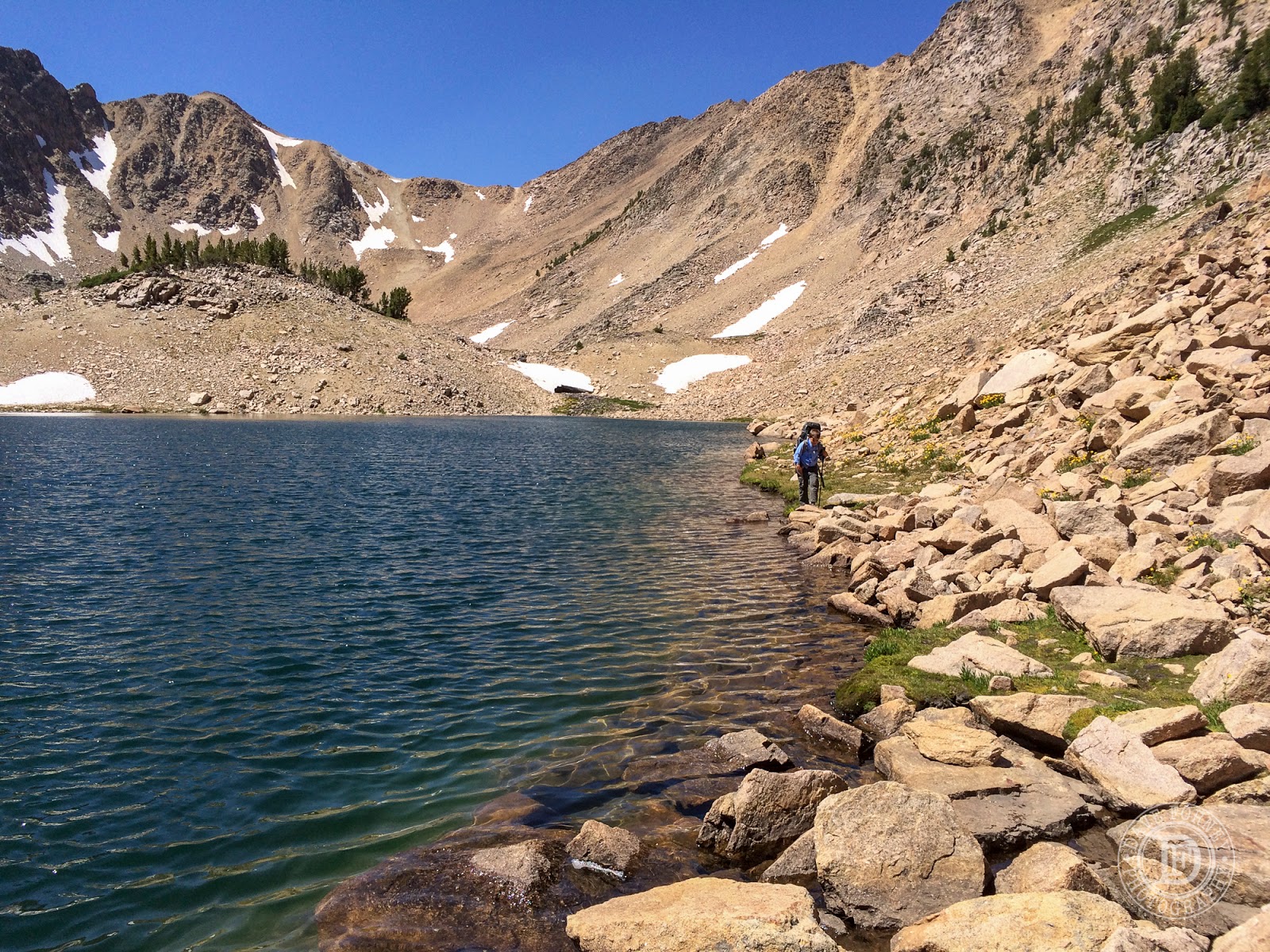 At these high elevations, even on the exposed East/South faces there were still large patches of snow, even in early August. This is a shot of me (just below the snow drift/cornice) that Hudson took with my phone. He was quite proud of this shot. :-) 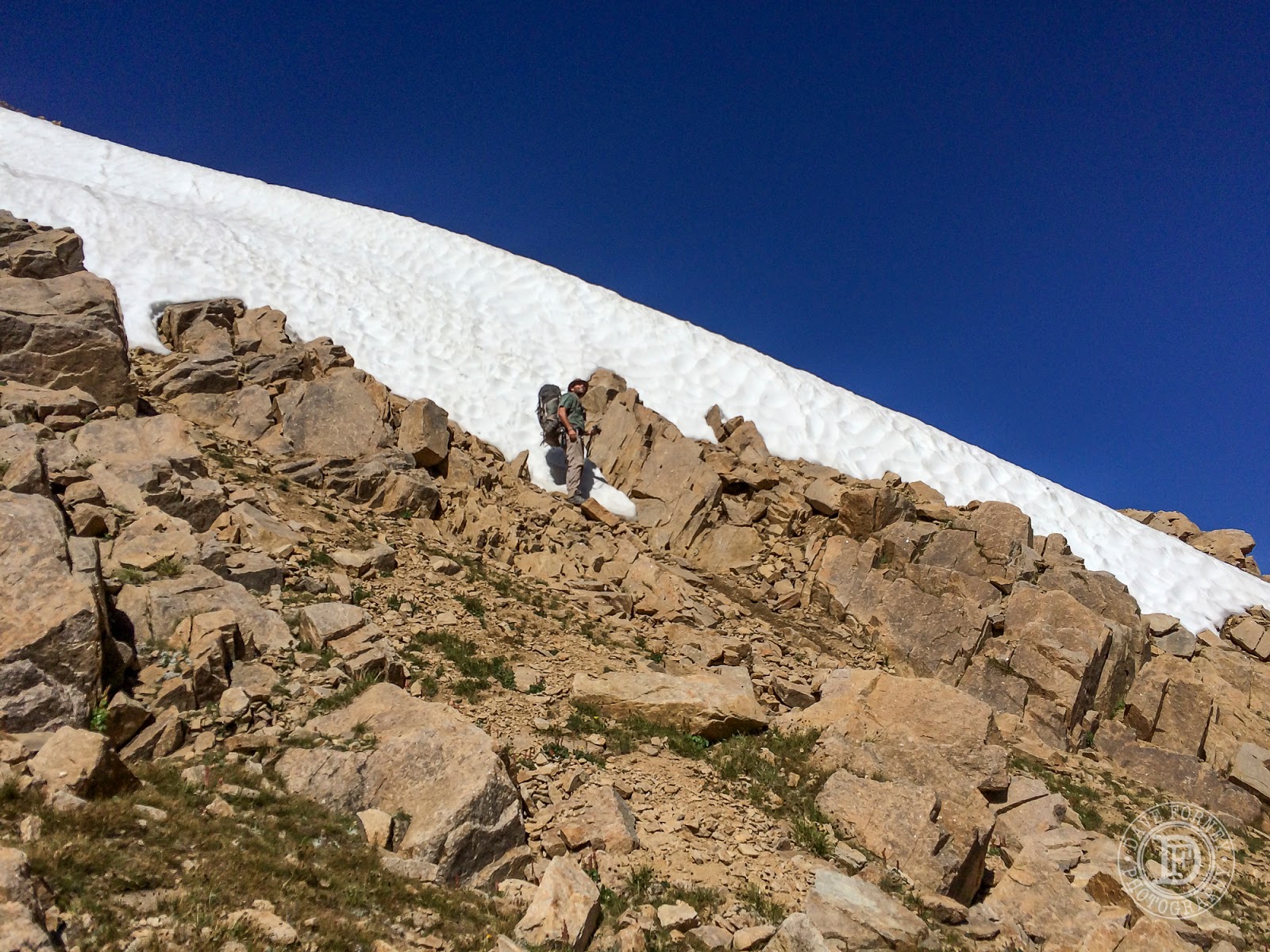 And here's another of Hudson crossing a small boulder field above the tree line. 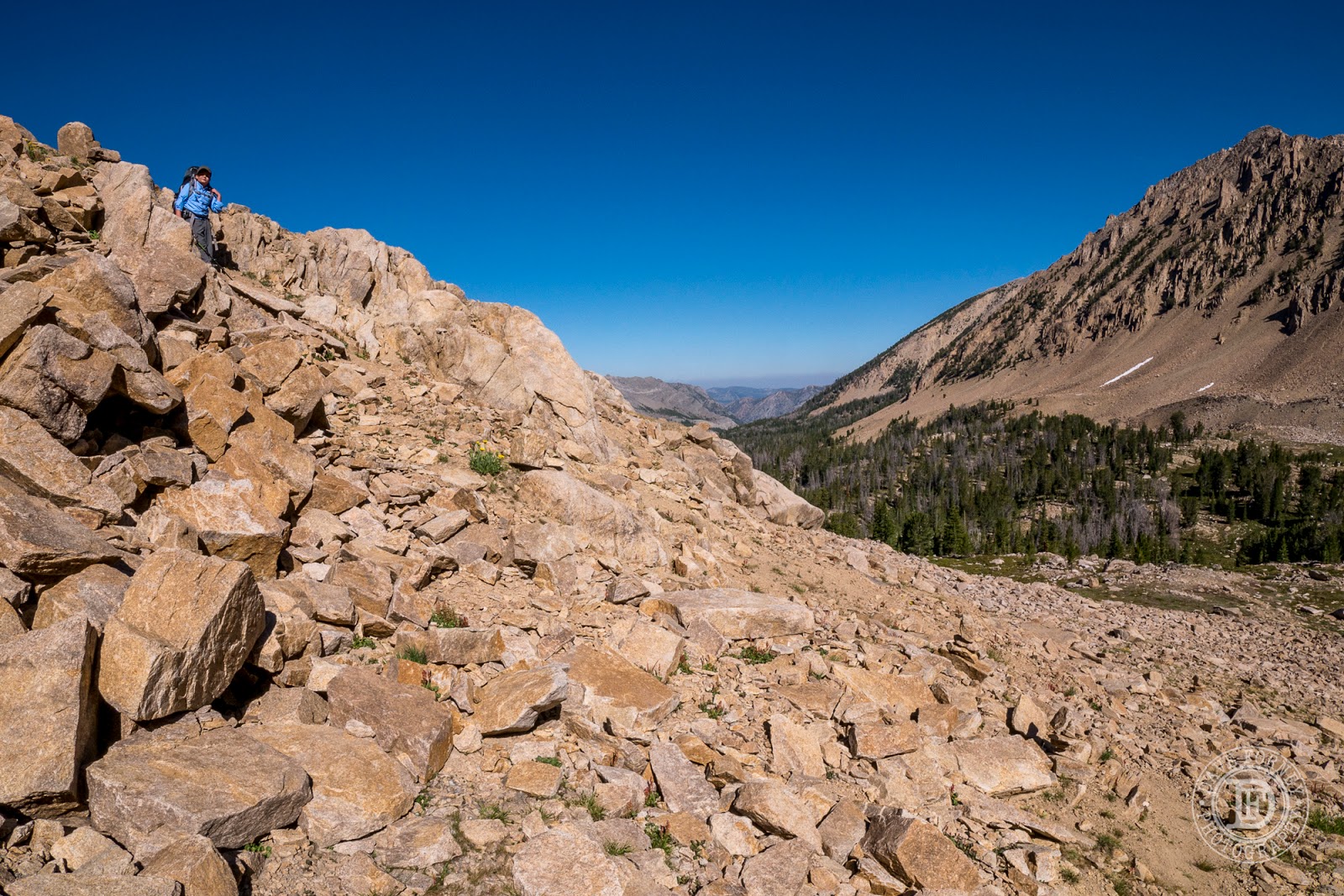 Hudson was especially excited about the snow. It helped that he knew that all of his siblings would be very jealous to see the photos and videos of him in the snow--something that we don't see often (ok never!) in Africa or formerly Indonesia. 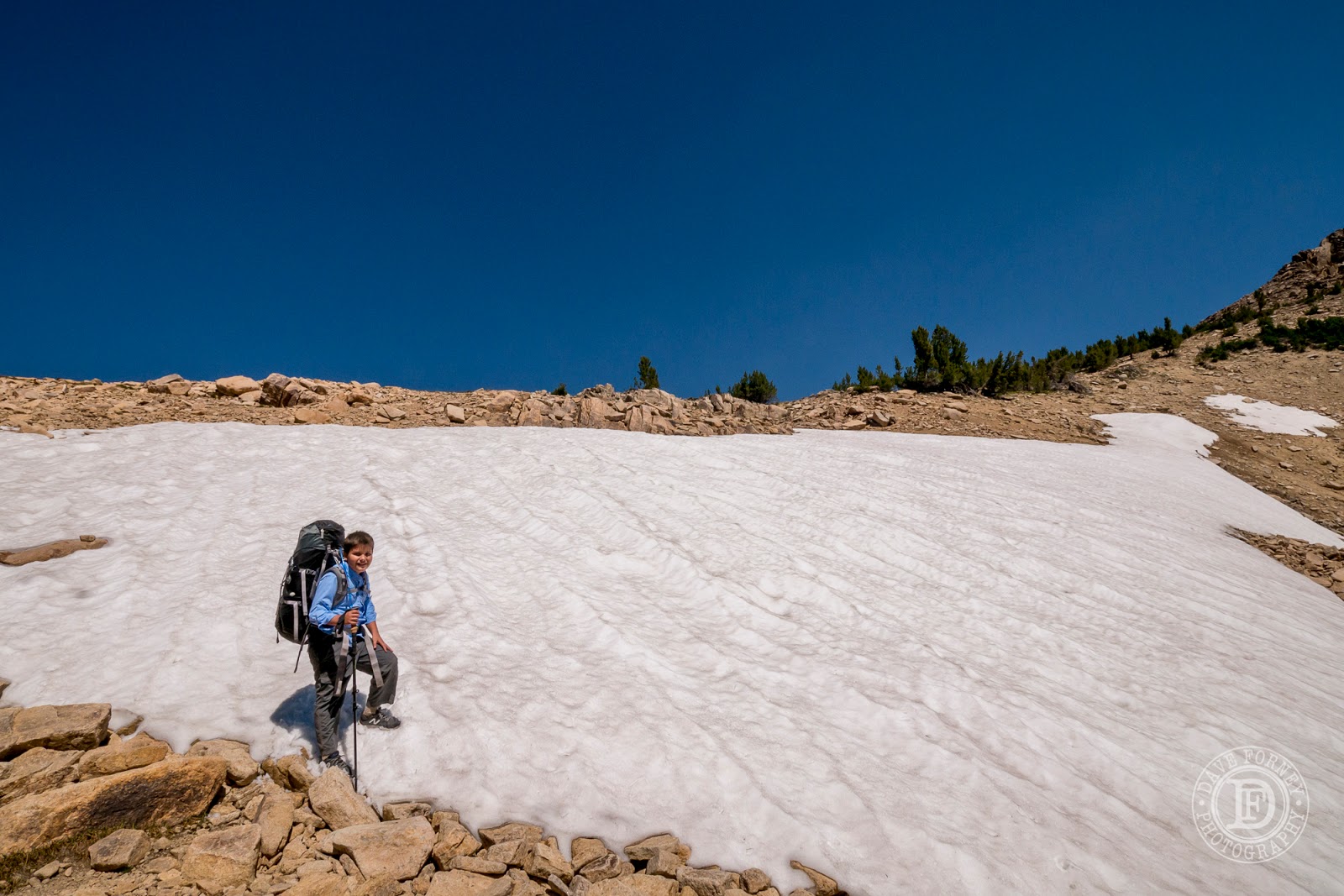 We enjoyed a wide variety of terrain and scenery during our five-day trek, from snow fields to boulder and scree fields, from high alpine meadows to deep woods and lush creek beds. The scenery was always changing and always beautiful. 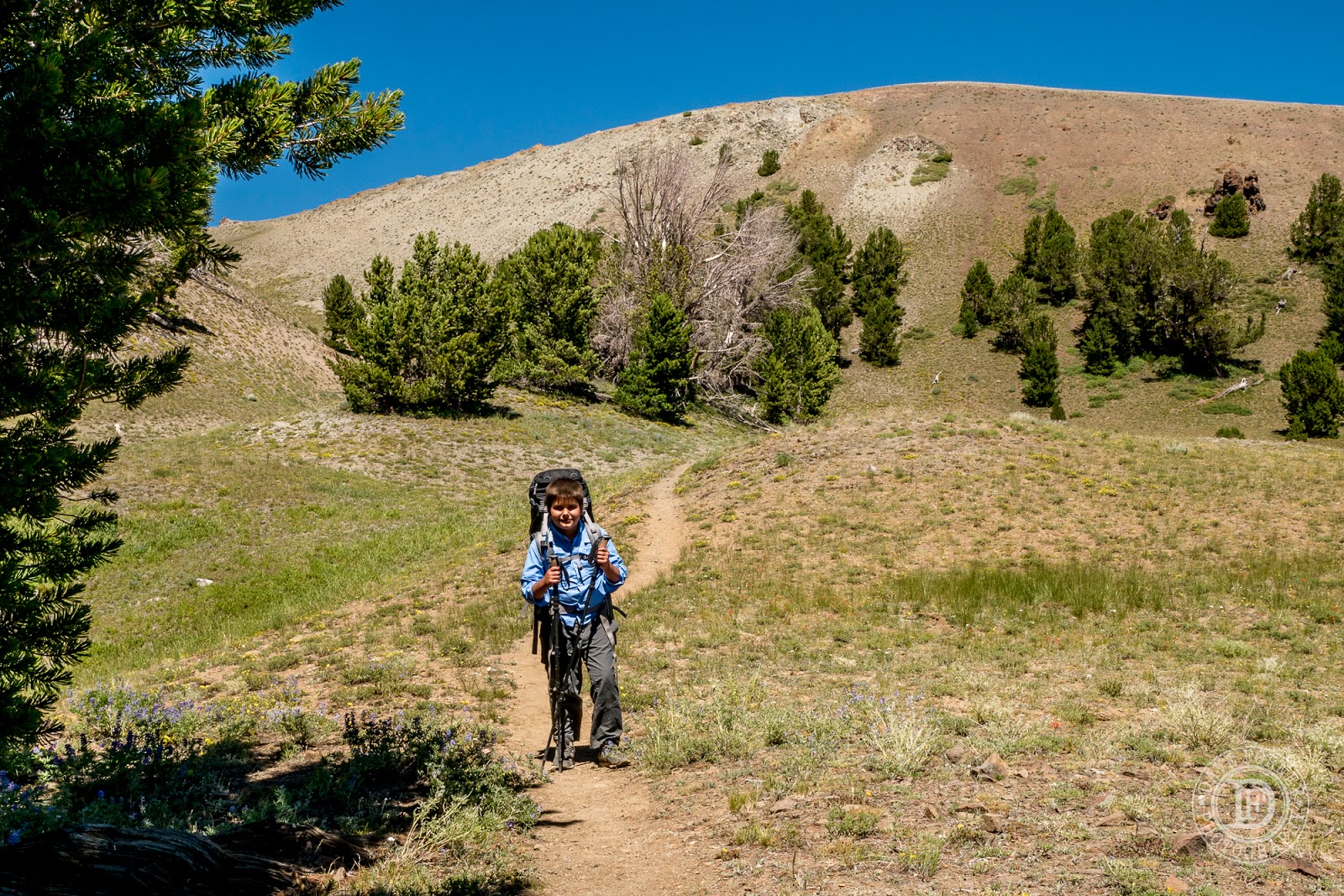 The weather was perfect during the days--blue skies and sunny, with cool temperatures. At night, we froze! Our tropically-acclimated bodies were most definitely not ready for the night time temperatures that usually fell below freezing in the early hours just before sunrise. We definitely should have brought warmer sleeping bags, but we only had our tropical weight ones, which proved to be woefully insufficient. In truth, I didn't mind, as I like there to be some significant challenges on these trips, and this was a great opportunity for Hudson and I to be creative and 'push through' these cold times each night.  Challenges like these help mold and shape character--at least they should. Those of you who know Hudson know that he has a great attitude and character. Even when pushed to the point of utter exhaustion on day two, after 10 hours of hiking off trail, with his heavy pack, and after we had run out of water a few hours before (always pump water when you have the chance--the next chance might be further away than you think) Hudson was still smiling, through chapped and bleeding lips, and between deep breaths that seemed to never get quite enough oxygen at the high altitude.  The cold temperatures were just another challenge to face head-on, and he did very well! I was very proud of him! 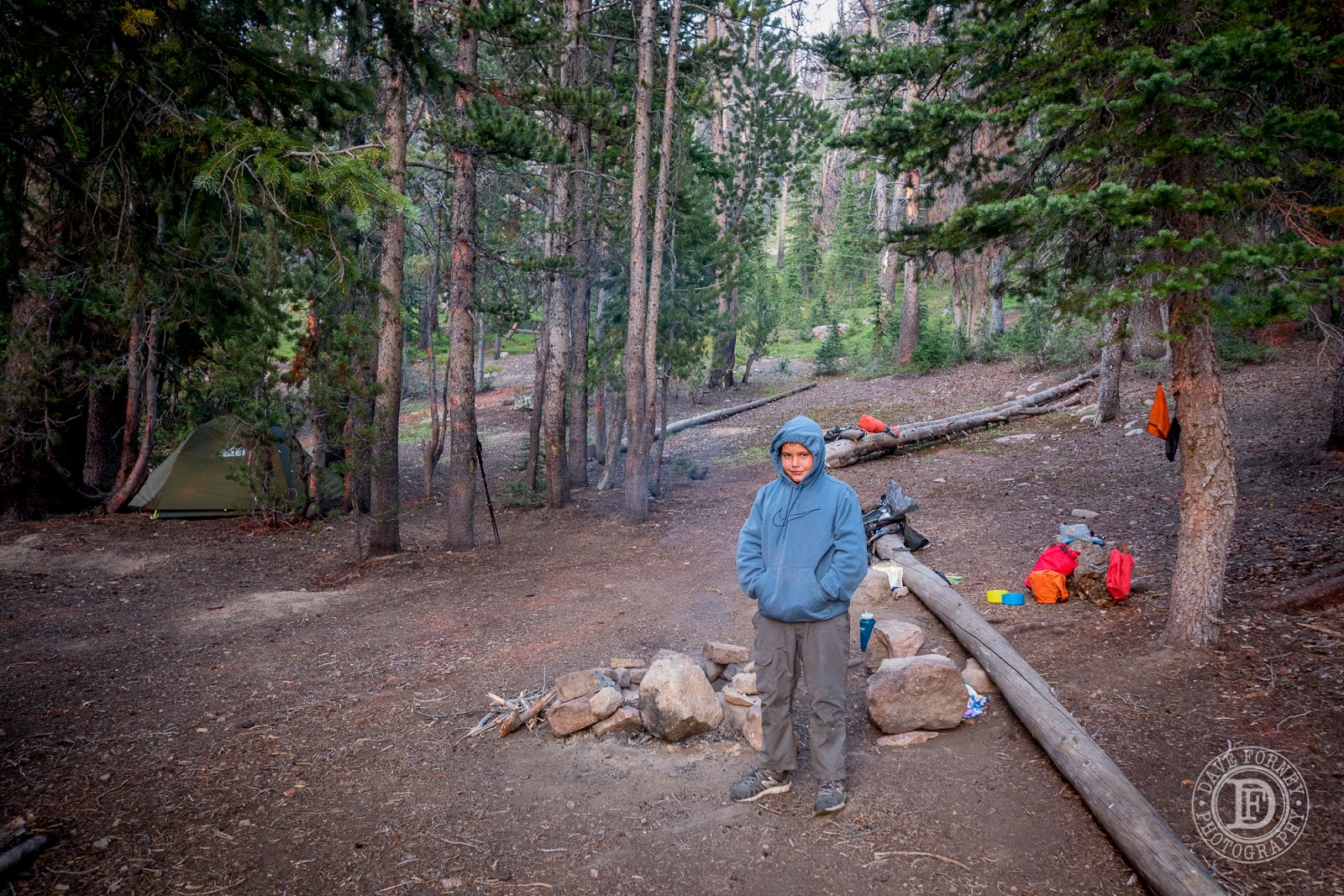 Our rewards for conquering the many challenges along the way, were the endless opportunities to enjoy epic scenery like this!... and the wonderful times sitting and talking around the campfire, drinking hot chocolate (for me coffee) in the freezing cold of early morning, and of course the unbelievable fishing along the way. Can you see Hudson on the far right side of the photo in the shadow of the tree, fishing in the crystal clear waters of Upper Chamberlain lake?

Here's a 360 degree panorama of Hudson atop the Castle Divide pass at 10,000 feet. Although the weather was absolutely gorgeous, the winds were howling at probably close to 60mph as they came through the pass here, at times making it hard to even stand up straight.

Check back soon for some more shots from our trek into the White Clouds Wilderness. Next time I'll show you some of the flowers and animals we saw along the way.
Posted by Dave at 8:04 AM