On Thursday my good friend and fellow pilot, Paul College, and I got to go on a wild pig hunt with our friends in the village of Binuang. 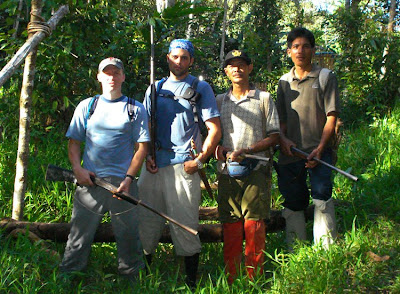 We flew hard all day taking many loads of women to the village of Paupan for a big gathering. Then we parked our planes in Binuang and set out in search of fresh bacon. They provided each of us with one of their home-made shotguns--though I must confess I thought it more frightening to fire this rickety steel pipe, than to face a boar with a machete. None-the-less there's something inspiring and bonding about sluggin' through the woods (or jungle) with "the guys," a gun slung over our shoulder. 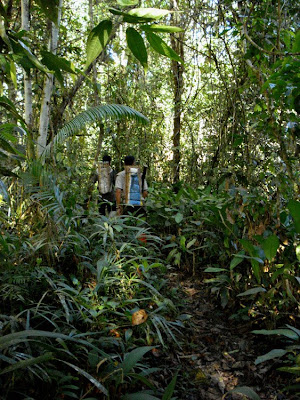 After riding in a motorized canoe for a bit, we hiked deep into the jungle. They asked us when we needed to be back to Binuang, understanding that we each had a long flight day on Friday. We suggested not too long after dark, maybe 7 or 8:00. That would prove to be wishful thinking. 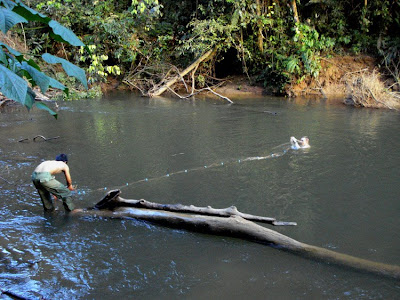 Along the way we set a few fish nets in the small river that we were criss-crossing. Paul jumped right in to pull the net into a deep pool. 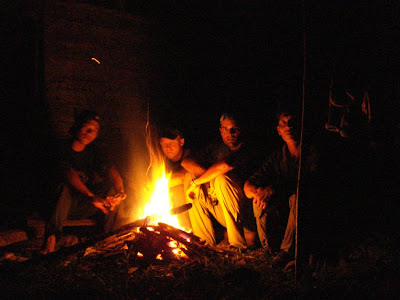 The guys tried to call some deer in just before dark, but none responded. We found an old, small pondok (small jungle hut) and built a little fire in the clearing. By now it was pitch dark, and the sound of constant, rumbling thunder was not far off. After eating some leaf-wrapped sticky rice and little fried fish, two of the guys said they were going to take a short walk across the river to check out one of their other pondoks. Pak Kalfin, Paul and I decided to wait for them to return. So around 7:00pm we laid down on the hard floor of the pondok and tried to catch some sleep until they returned. We would then hunt on the way back to Binuang. 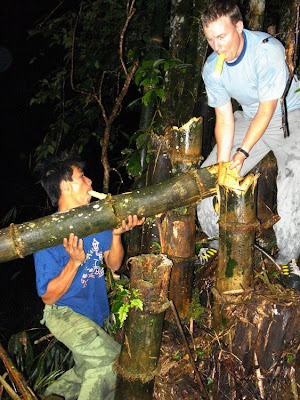 But they didn't come back. The thunder gave way to torrents of rain--hour after hour it continued, and still they did not return. Around 1:00 am we heard loud hoots, far off in jungle, nearly drowned out by the sound of the now raging river and the waining drizzle. We searched out the source of the voices, and found that our friends were stranded on the other side of what used to be a creek, but now was a furry of chocolate brown frothy rage, far to deep and fast and wide for them to cross, not to mention the fact that they were bringing back a huge pig. So we set to work cutting down a massive stand of towering bamboo, falling them across the river to form a bridge. 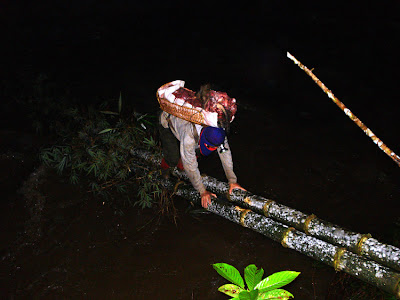 The first several poles were immediately swept away by the torrents, but eventually they got two of them tied together with vines. Slowly they made their way across 30 feet of slippery, wet, bouncy bamboo, starting first in the water at the far side and slowly ascending 10 feet or so to the muddy cut bank on our side. On their backs were woven packs loaded to the hilt with fresh bloody pork. 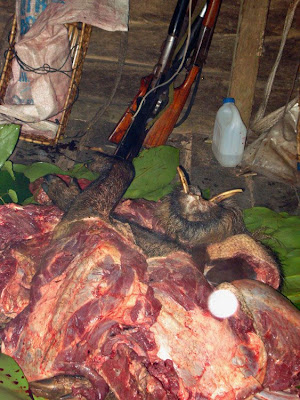 We made it back to the pondok at about 2:00 am, even more wet, cold and tired than before. 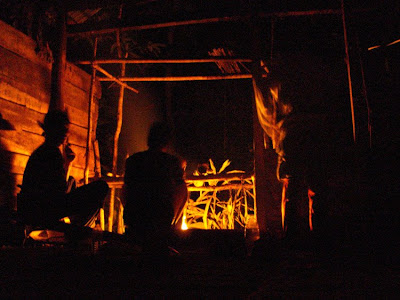 Making a fire with wet bamboo hardly seemed worth the effort, but we got it going and tried to sleep a bit more...though sleeping on cold, hard wood boards is not exactly ideal. Additionally, it served as the cooking fire for breakfast. By 5:30am there was an old steaming iron pot full of boiled pork meat, slabs of chunky liver, and my favorite (note the sarcasm,) boiled pig brains wrapped in banana leaf. Yuuuuummmy! Nothing like fresh, warm, smooshy pig brains to get your day started. 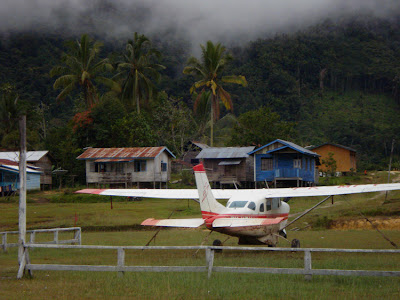 So by 5:45am, we set out for Binuang, hiking several hours back through the sopping wet jungle and wading the swollen rivers, to arrive just in time to pre-flight our planes and set out on another day of mission flying. It certainly wasn't the same as a Pennsylvania deer hunt, or moose hunting in Alaska, but it was definitely a good adventure, and another great opportunity to bond and deepen friendships with our buddies from Binuang!
Posted by Dave at 1:55 PM

That's what I call an adventure!

Dave, I really enjoyed your hunting adventure, that the nationals did. Did you ever see a live wild boar? At least you got a bath.

This is another great story and pictures, Dave. I'm just glad I can read about it after you are back home and safe again.

Those are some amazing pictures. What an exciting adventure!

Carlton, I didn't see a wild bore before it was killed this time. However, I have seen one prior to this, crossing the runway as I was landing. Wouldn't want to hit that!

Yum yum Dave! Finger licking good food! Just reading this trip made me feel tired for you and Paul. The good food would have kept me pumped! Nothing like fresh pork..and brains to top it off.