Sunday morning dawned bright and sunny, though much of that sunshine never makes it to the jungle floor!  Flowing right through the middle of the Lalut Birai research station is a small babbling brook, perfect for frogs, insects and kids to play in. 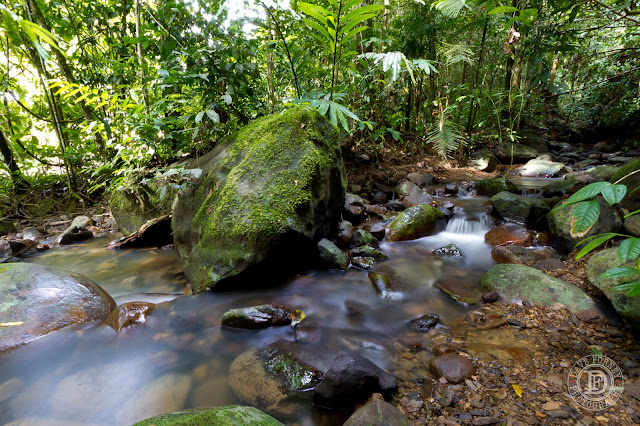 Here's a view of the part of the Enggeng River where the kids enjoyed swimming. 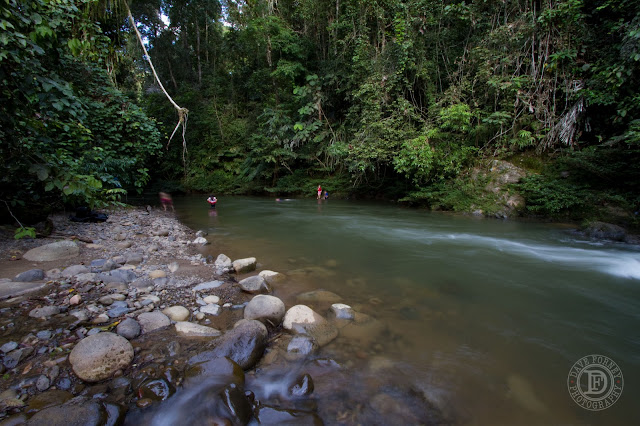 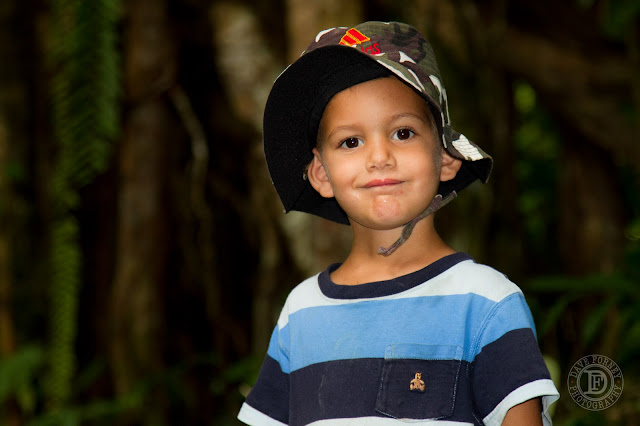 Butterflies and moths were commonly "caught" inside the screened-in building where we ate our meals. A light bulb, which got it's "juice" from a battery (charged by a solar panel in the central clearing), stayed on all night there, proving irresistible to passing moths.   After looking at them, the kids (and Joy) always set them free. 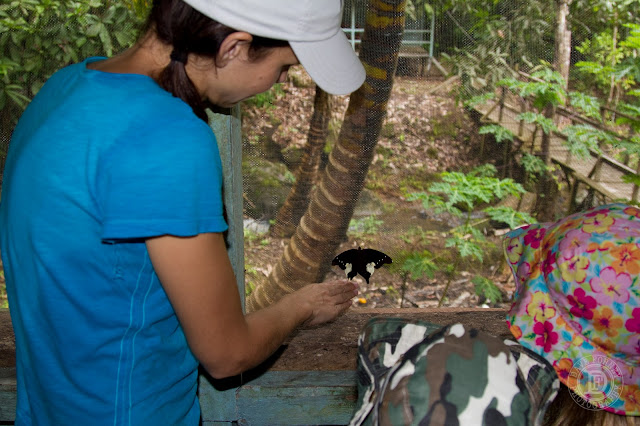 Of course, there are millions of ants in the jungle.  Everywhere you look there are ants of all varieties.  Some ants are over an inch long, but don't seem interested in biting (thankfully)!  Others, like the fire ants will latch on and not let go, delivering a very painful, bee-sting-like bit!  Some travel in groups by the thousands--probably even millions--going from somewhere to somewhere else, but always in a a continuously moving, snaking, line five to 20 rows wide.  In front of our cabin was a herd (what do you call a huge group of moving ants???)  of tiny little ants that were moving continuously for over two days.  In fact, they were still going when we left, and for all I know the line may still be moving past that same spot now!  They were very small, only about 1/8 inch, but fascinating to watch.  Many were carrying stuff in their jaws...though that was barely visible without the aid of the macro lens. 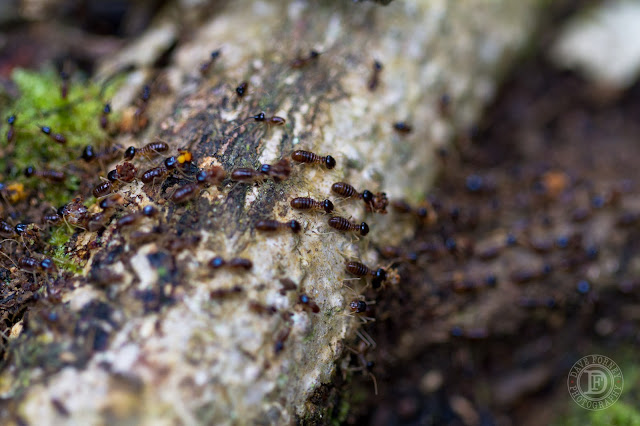 We also discovered a fuzzy, wuzzy caterpillar right near our cabin.  Any caterpillar that's this colorful and especially this hairy is usually NOT a good one to touch! 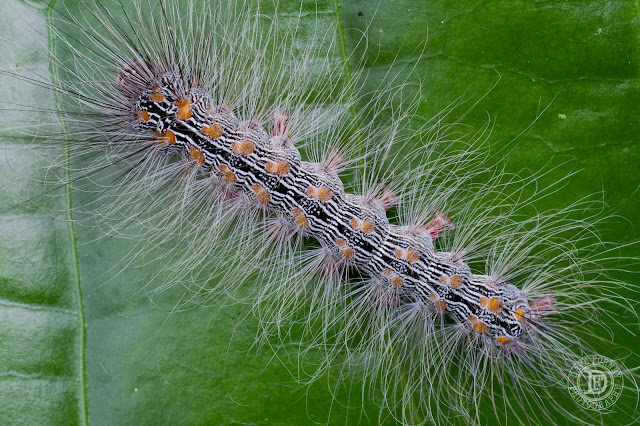 Remember I said that the kids weren't the only ones that liked to swing on the vine?  Well, I wasn't kidding.  Joy and I had our turns too...but fortunately I was the one with the camera.  :)  Those fashionable shoes are the jungle STANDARD footwear attire in this part of Borneo.  They cost about $2.00 and are made out of floppy, molded one-piece rubber.  There's no arch support or cushioning are anything, but on the bottom are softish, rubber cleats (think soccer shoes) that grip onto everything.  They wear out fast, but hey, they're cheap and indispensable on the slippery jungle trails! 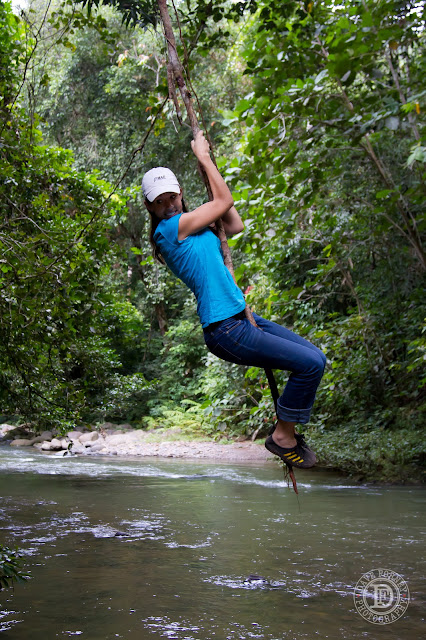 Hudson also has a cammo hat! 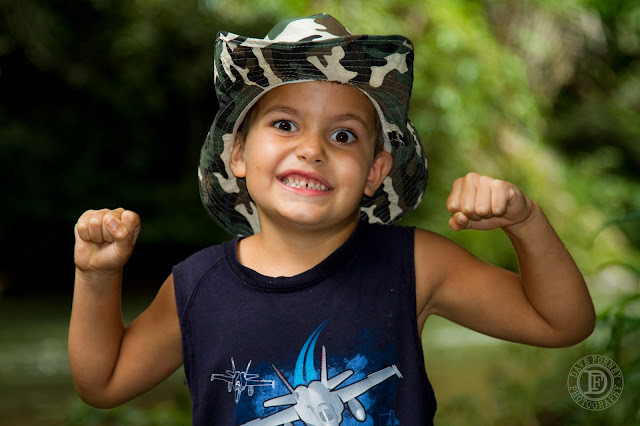 On our way back to the airstrip, we stopped at the estuary of the Enggeng River, where it feeds into the much larger Bahau River, and my friend, the village Elder, Bapak Anyi Apui, gave Britton (known locally as "Laweh") a lesson on shooting a locally-made slingshot. 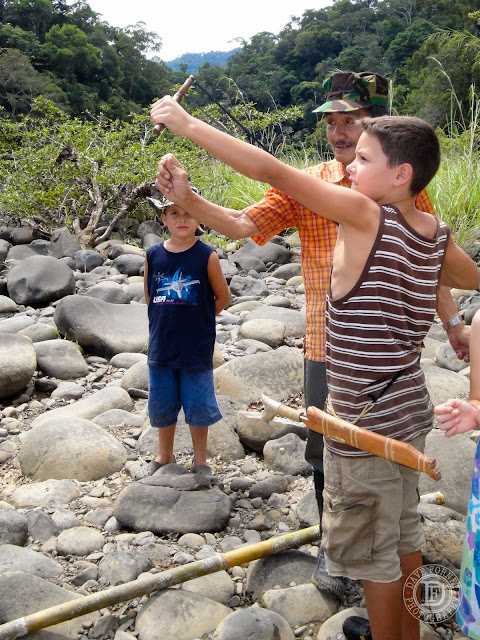 It was a great trip, thanks to the help of many of our friends from Long Alango!  When we took the group shot, several of them had already left, so aren't pictured.  In truth, I think it would have only taken a few people to help us out, but hey, it was an opportunity for all of us to hang out and visit and relax bersama (together) in God's beautiful creation--an opportunity to strengthen some existing friendships and build some new ones! 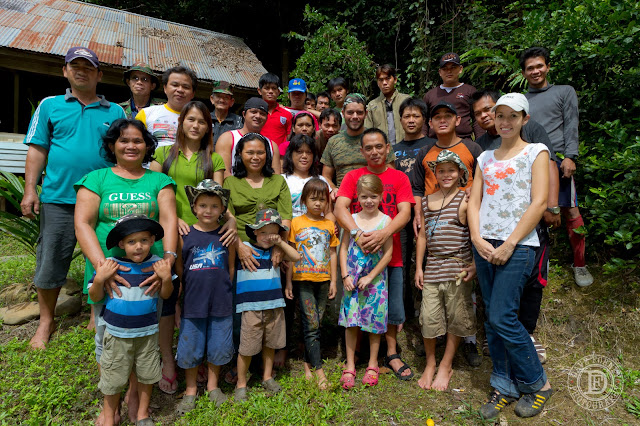 But all that relaxing and friendship-making takes a real toll!  Hey, somebody's gotta do it!  At least one person in the plane is still awake, can you guess who? 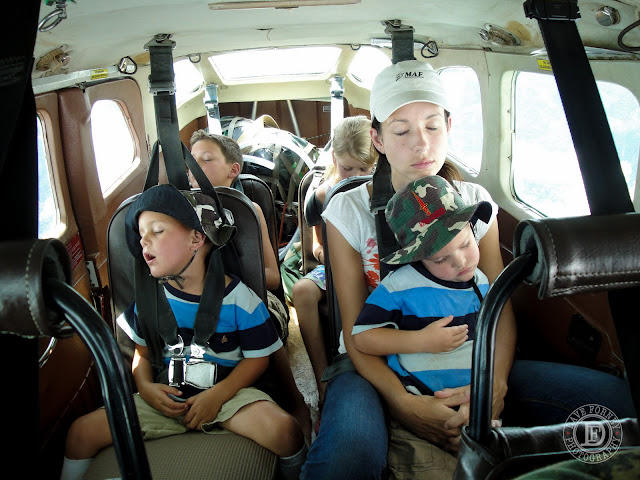 Hope you enjoyed the re-telling of our adventure at Lalut Birai.  Perhaps if you come visit us sometime, we could arrange for you to experience the jungle there as well.  You wouldn't be disappointed!
Posted by Dave at 5:01 PM

I believe you would call that troop of ants an "army."
I really enjoy your tales of adventures! Sometimes they are so incredible as to be almost unbelievable without your great pictures. How awesome is God, that even in His creation now marred by sin, sometimes we just have to stop and say "WOW!"???

What a fun series of posts. Love it- thanks for sharing!

I was just ready to post this and I saw Arielle already had the answer and I agree. I was watching a National Geographic Channel last night.http://channel.nationalgeographic.com/channel/great-migrations-science-army-ant
Very interesting show. I am enjoying following your blog and will continue to pray for you and your family as you serve the Lord in this special ministry.

Ah yes! An "army" of ants. Thanks Arielle and BJ. I should of remembered that, but couldn't at the time I wrote it. Had my son, Britton, been around at the time, I'm sure he would have known too. Shannon, you had us cracking up...yeah, we didn't run into a smoke monster. Phew!