Indonesia's Independence Day is August 17th.  It's celebrated throughout the country, even in the interior villages.  A few weeks ago, I had the chance, along with MAF's program manager, Steve, and fellow MAF pilot, Paul, to attend the opening festivities of the two-week long Independence Day celebrations in the south Krayan region.  We also brought along a group of four U.S. mission aviation college students that had just arrived here the day before to get a taste for what missionary pilots do.  It was quite an introduction! 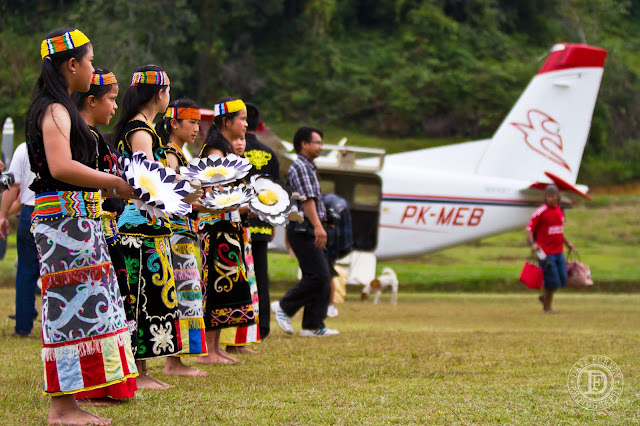 MAF flew many people into Pa'Upan for the event, both from surrounding villages and from the far-away coastal cities.  This year was a bit unusual in that the Bupati (a high-level, elected government official who is just under the governor and presides over a large area or region) from both Malinau and Nunukan  were planning to attend.  They specifically requested MAF to transport them, along with their entourages, so we flew multiple loads to see it happen.  Pictured below, just to the right of the MAF dove on the tail of the airplane is the Nunukan Bupati. 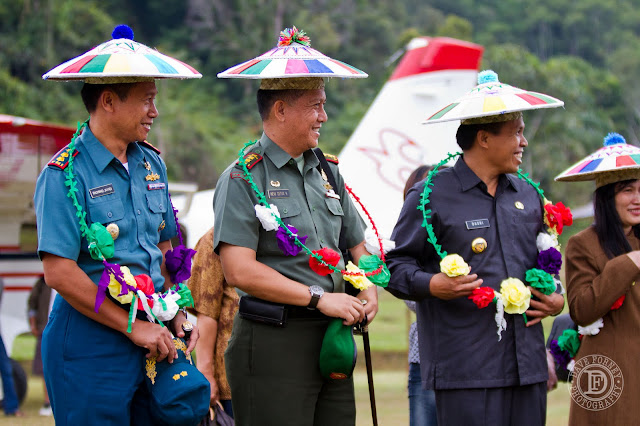 I was originally scheduled to fly that day and then after completing all of the flights, I was planning to overnight with the Kodiak in Pa'Upan.  However, my good friends, Pak Ajang and Pak Gat, in Pa'Upan, insisted that I be there on the ground with my camera right from the get-go, in order to photograph the festivities and documents the celebrations.  So Paul readily agreed to swap me out and I was able to be there, ready, when the events kicked off in full gear. 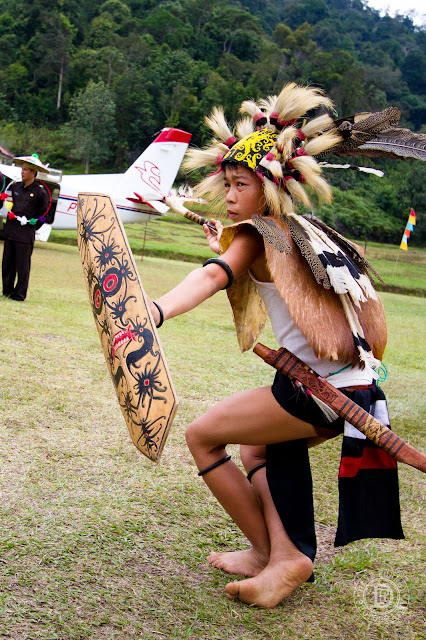 Pictured from left to right:  Paul, Craig (our chief pilot), and Steve, (our program manager).  In the background is our Caravan.  The Kodiak and Caravan did the lion's share of heavy-hauling for these celebrations. 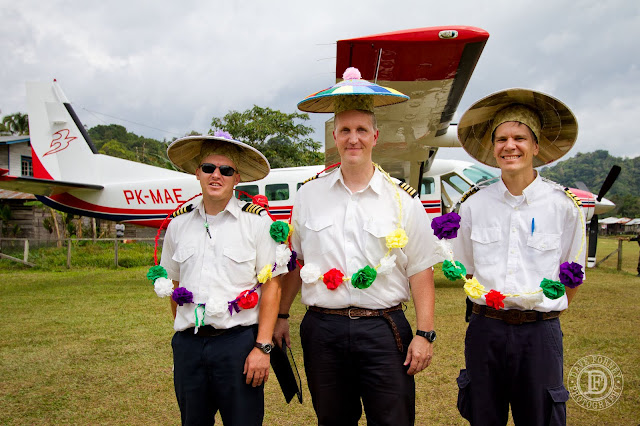 After the arrival of the Bupatis, the opening ceremonies began immediately.  The entire village was lined up in rows beside the airstrip, many wearing traditional colors and clothes. 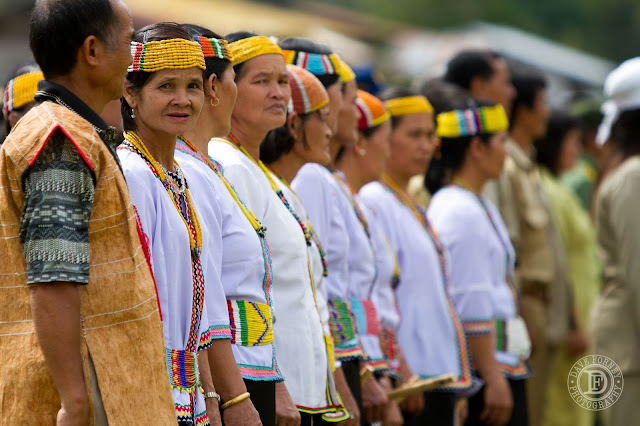 They faced a make-shift stage while speeches and introductions were given on a battery-powered sound system.  Below, my good friend, Pak Gat, is doing some of the opening introductions.  You can see the people lined up in the background, but Pak Gat is turned around at the moment speaking to the Government officials who are seated on a stage behind him.  To the right is the top of the big soccer trophy, that will be given to the team that comes out on top after a grueling, two-week soccer tournament between all of the villages in that area. 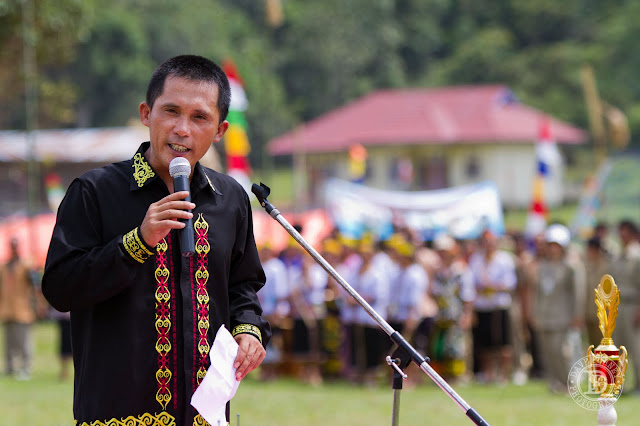 And here are a few of the soccer teams, who were also lined up during the speeches and intros.  Whereas the Kodiak, driven by Paul, flew multiple loads of people throughout the day into Pa'Upan, and then spent the night there, the Caravan had other places it needed to go after flying the Bupati in from Nunukan.  You can see it here, piloted by Craig, taking off in the background. 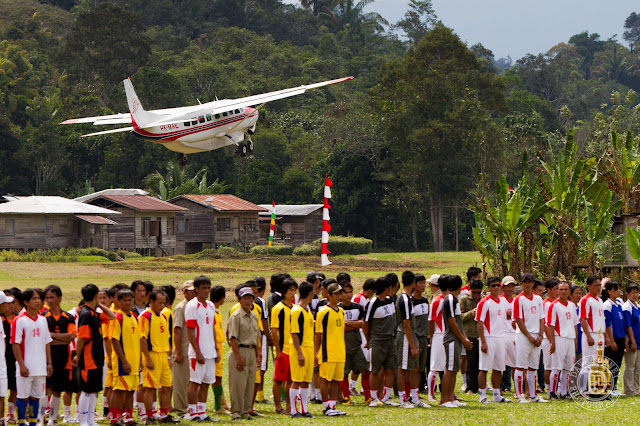 The young kids were torn between watching the festivities in the foreground and the airplanes in the background. 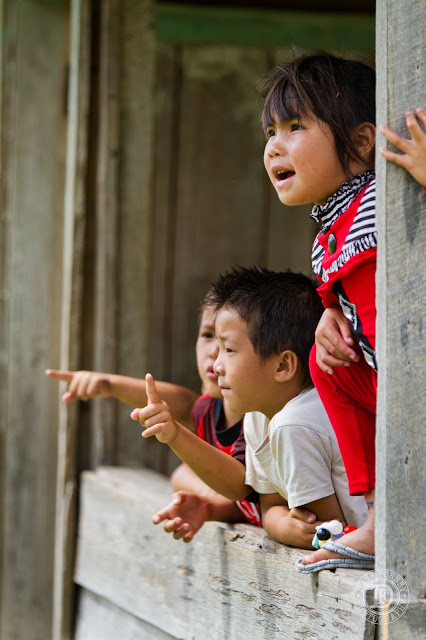 After all of the opening speeches and introductions etc. etc. were completed, we returned to Pak Ajang's house for a feast of delicious food.  At left is Steve, at right is the Malinau Bupati. 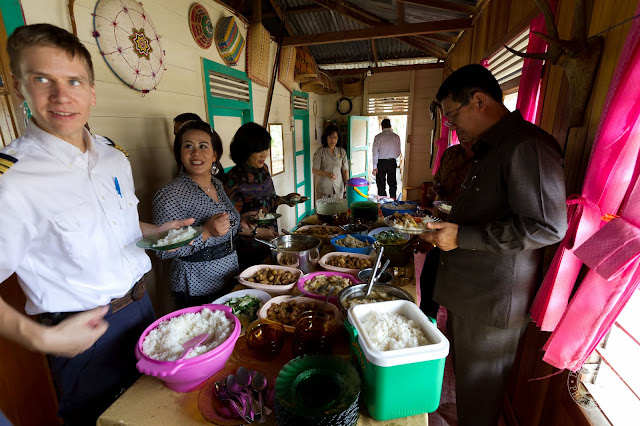 The village killed two water buffalo and six pigs for the opening ceremonies.  Here, the men are dividing up buckets full of pig meat and fat (the best part) to various houses and families after it's been boiled and roasted for hours on fires they have going under their barbecue tent.  Still hot and freshly salted, this stuff was like candy to the villagers.  Think of it like that big, fat, stuffed Turkey (or whatever it is you like to eat) for Thanksgiving dinner.  To the people interior, this is as good as it gets.  And it IS good!  However, being that this was right in the middle of the Muslim holy month of Ramadan, and that the Nunukan Bupati and most of his entourage are Muslim, there was great effort by the people in Pa'Upan to keep the Pork (which Muslims are not allowed to eat) and all other food and drinks out of sight as much as possible (most Muslims fast from food and drink each day during Ramadan).  Whereas normally the food would have been part of the festivities, this time they kept the festivities on one side of the airstrip, and the pig roasting and eating on the other side of the strip. 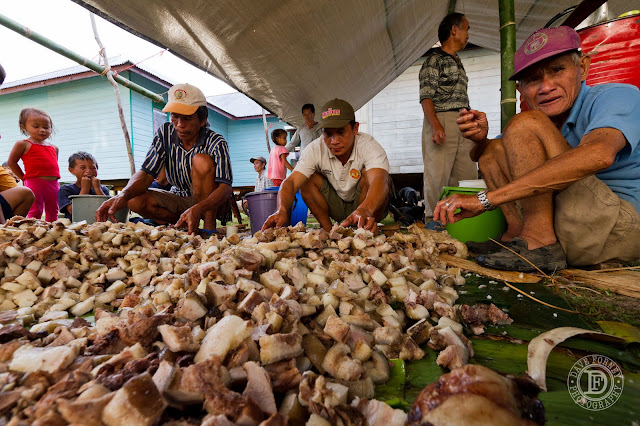 I'll have one more post next week, showing some of the other things that were going on there in Pa'Upan.  Be sure to stop back to see the rest of the story.

But in the meantime, we just wanted to say thanks for all of you that were praying for a quick resolution to our lost home-school books.  We still have not been reimbursed by Singapore airlines for the lost books.  It seems that they are good at dragging their feet when it comes time to paying up.  However,  Heart of Dakota Publishing, has been exceptional in their response to our request for a speedy re-shipment of the books.  Joy has been blown away by their generous offers to help with the costs and the great lengths to which they went to ensure that the replacement books got to MAF in a very short time.  (And so far she is very impressed with the curriculum!)  Thanks to them, and to Barb, at MAF, who also went the extra mile, we were able to get the replacement books shipped to MAF in time to go with Tom and Pam, who were moving over here from Nampa.  They agreed to bring the box of books as an extra piece of luggage.  If not for everyone's help, it could have easily taken several months to get them here the slower and cheaper way, OR, a whole lot of extra money to get them here in a reasonable amount of time.  Thanks all of you for your help!

Because of that, the kids were able to start school, pretty close to when Joy had hoped to start.  It may seem a bit early to you, but she likes to start a bit sooner, since throughout the year there tend to be a lot of "interruptions" like village trips etc.  Here's a quick shot of the kids on their first day of the new school year, each holding up a sign that Joy made indicating their current grade.  She's always so good at making things special and memorable, so of course she had a special "first day of school breakfast" and these little "place mats" were at each kids plate. 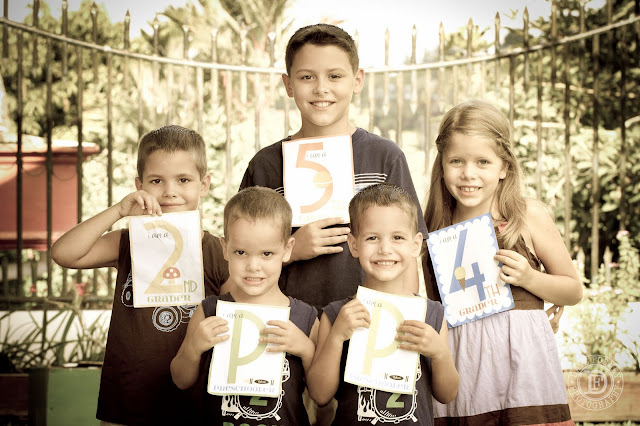 This coming Friday morning (Thursday evening in the U.S.), Paul College and I will be embarking on our annual "Man Vs. Jungle" expedition.  In what seems to have become a yearly tradition, we'll be giving up the relative comfort, safety and predictability of life in Tarakan for the grueling, sweaty, leech-infested jungles of the interior in an effort to experience travel the "hard way", without the use of the airplane.  This trip promises to be our most ambitious effort to date as we'll be attempting to traverse an area that is so remote and isolated that only one of our three guides has ever been there--and that was more than 20 years ago!  Unfortunately, the other few people that remember that area are either too old or too sick to accompany us.

Although this trek holds a high degree of uncertainty as to the total length of time that we'll be hacking through the bush, the difference in this and others that we've done is that we will not need to meet another group of guides somewhere in the middle of the jungle to complete the trek.  That's always a little disconcerting as it feels like you're looking for a needle in a haystack.  But this time we will be flying our guides into the starting point with us, and they will then accompany us the entire length of the journey until we make it back to their home areas anywhere from 7 to 12 days later.  We're confident that they will find their way, as these guys are masters at navigating and living in the jungle.  It may take a while, but we'll eventually make it out.

If all goes well, we plan to complete the entire journey all the way back to Tarakan without the use of the airplane.  Stay tuned, I'm sure that there will be some interesting photos and posts after the trip.  In the meantime, please keep us, as well as Joy and the kids in your prayers.  It's a pretty special wife that lets her husband go trekking in the jungle for a week or two every year!  But I'm sure she and the kids would appreciate your prayers as they hold down the fort here in Tarakan.
Posted by Dave at 3:00 AM

Whew! Glad things are well with y'all! Will be praying!