What Happens When Mama is Gone.

Joy left for America on Thursday to speak at the Relevant 11 conference this coming Friday.  You can read about it on her blog.  The kids and I are so proud of her, but we sure do miss her!   While she's gone we're trying to think of all the fun and crazy things that we can possibly do and cram them into the two weeks before she gets back!  Obviously this is a plan to help the time go faster, not to leave her out of the activities.
Today we took a hike in the jungle.  Don't be fooled by the solemn looks on the boys faces.  They were having a blast!  But after five minutes of waiting for my camera lens to unfog in the hot, humid air, I think they had long since slipped into daydream world. 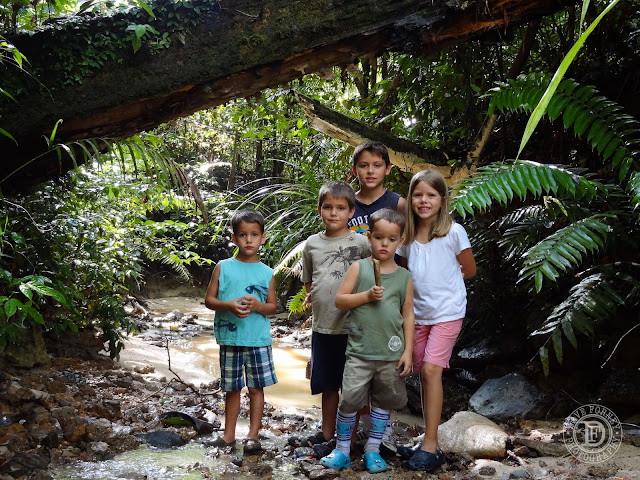 In this shot Britton and Hannah are looking for "artifacts" in the stream bed.  Britton keeps a big supply of spare rocks, wood, moss, etc. for his pet reticulated python and turtles.  Hannah just loves to collect anything and everything that she possibly can--in this case pieces of petrified wood and coral that are abundant here in the stream. 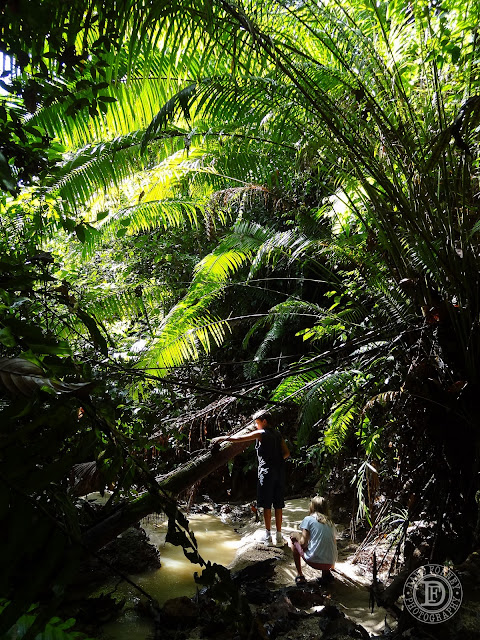 Aw, Tyler!  The little guy cracks me up.  Check out those socks!  He refused to take them off, even when we were walking through sand and water.  He loves 'em!  And boy can he talk!  In fact, he never stops talking--ever!  Fear not mama, any snake within a 100 miles of us had plenty of warning to run away before we ever got close, because Tyler was talking continuously.  I must have heard "I'm o.k. dad. I'm o.k."  at least 50 times or more, as he reassured himself (he's tougher on the outside than he is on the inside) that he was going to be o.k. by telling me as much.  And of course, I told him that same thing, "Yep, you're o.k. buddy, you're doing just fine." as I held tightly to his hand.  The jungle stresses him out even though he begs me to take him in.  Meanwhile, Tanner never says a word and refuses help, plowing full steam ahead trying to keep up with Britton.  Amazing how unique and different the twins' personalities are! 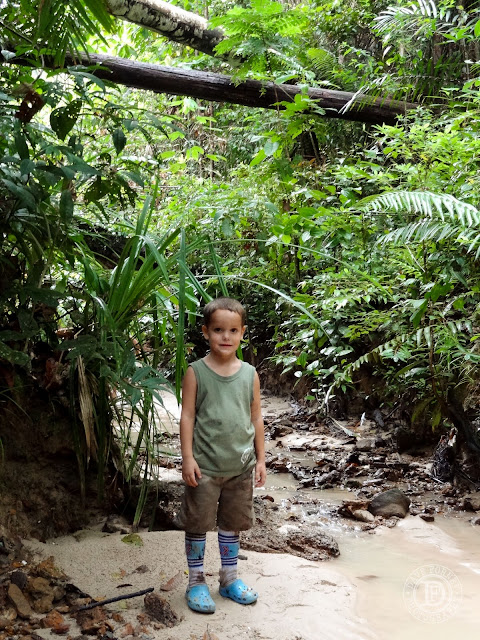 The kids were spotting all kinds of bugs and flowers and stuff.  Here's one of the flowers. 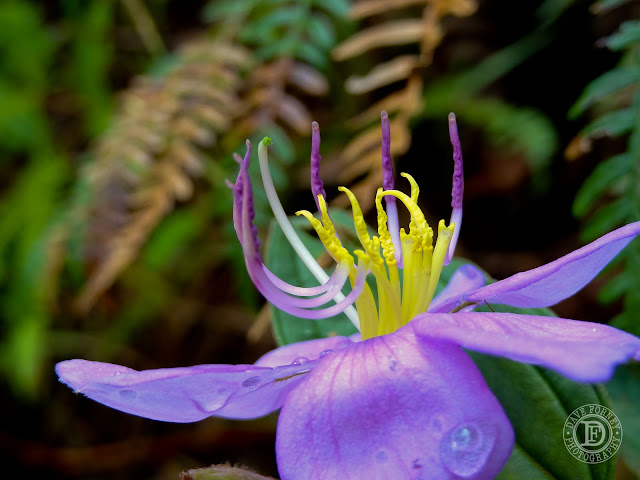 And here's some thorns.  These suckers are BIG and SHARP! 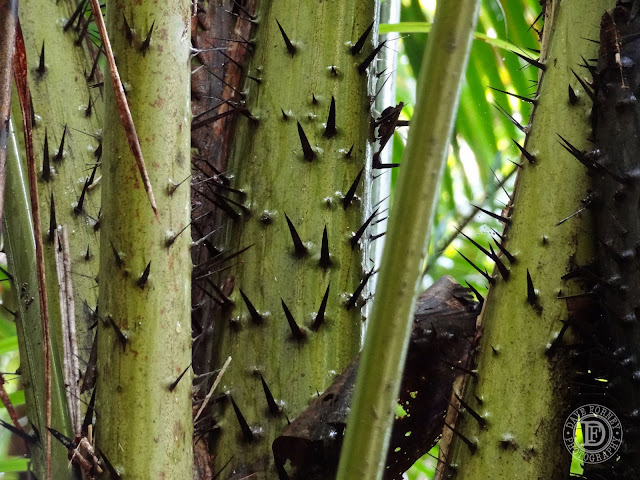 Just as we were reaching the bottom of the ravine, Hannah spotted a ginormous wasp nest not more than 15 feet away.  We were standing right in line with the HUGE wasps that were flying into and out of the nest.  I've never seen anything like it!  It was at least six or seven feet tall and probably two and a half feet wide at the base, attached to a dead palm branch hanging close to the stream.  These wasps were crazy BIG!  And EVIL looking!  One of them landing on Britton right about the time Hannah pointed out the nest.  Fortunately he kept his cool as it climbed in his shirt and I slowly turned it inside out until it flew away.  Others were flying over our heads.  Praise the Lord we got out of there without any stings.  There were thousands of them and I'd of hated to see them stirred up and mad!!! 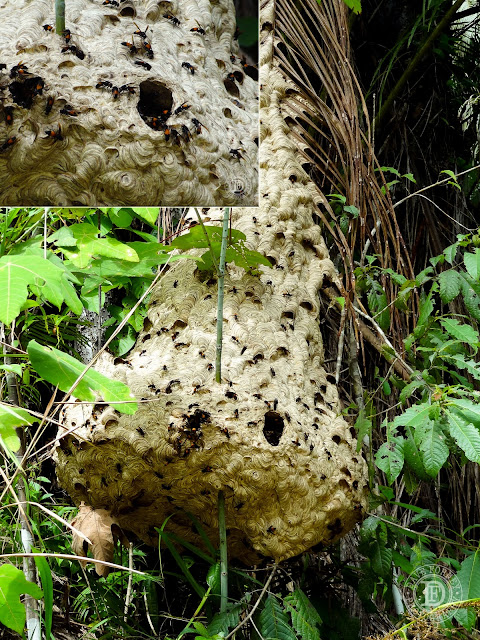 Shortly thereafter we got overtaken by a thunderstorm and made our way back to the car in a downpour, dripping wet like a bunch of drowned rats.  But the kids had a blast!  We've also been playing a lot of board games and drawing pictures.  Last night we took the RC plane down by the hangar and joined another MAF guy and a group of Indonesians who had brought their own Radio Controlled planes to fly.  It was like an air show!  We've also enjoyed a family movie night with popcorn and sodas.  Oh, and we've been blessed by many of the other families here on our program who have graciously and generously done everything from having the kids over to play, to making us yummy pumpkin bread, scrumptious doughnuts, amazing pizza and more!!  We have the best team!

This afternoon we also busted out the Red Ryder BB gun for some target practice.  Each kid takes a turn as I teach them basic gun safety and they get to try their turn at becoming the "Top Shot".  Of course, Tyler (at left) who is a weapon fanatic, always takes a turn every single time, with or without the real gun.  In this case he's "shooting" with the scope covers that came off my pellet gun (not pictured).  Oh, and just to put your mind at ease, the gun was unloaded and the safety on for this picture.  Obviously this is rule number one--never point a gun at a person.  Of course, there's always exceptions to rules--like when your dad wants to take a picture and personally takes responsibility for the risk of getting shot in the schnoz! 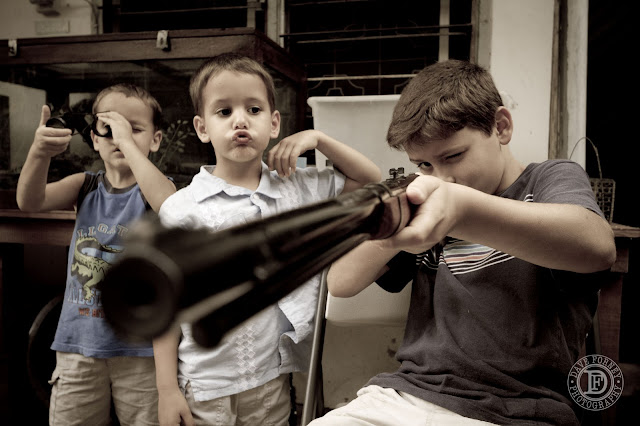 On Wednesday we got a unique flight request.  It was actually a "no fly" day as we had a full day of meetings planned here in the hangar--tech meeting, staff meeting,  and then a half day of prayer.  However, an Indonesian pastor had died the night before in Samarinda, and we were being asked to fly his body back to his home and family in Malinau.  We agreed to do the flight.

Samarinda is about 1 1/2 hours direct flight from Tarakan by Kodiak and we rarely make that flight from our home base.  In fact, I had never done it before--been there quite a few times from the Apokayan region, but never directly from Tarakan 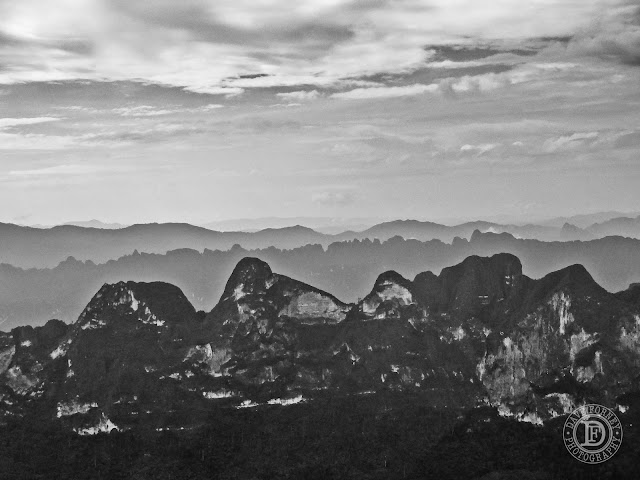 Large areas of limestone formations appear out of nowhere, like the Badlands of Borneo!  It's hard to capture it from three thousand feet above, out the window of a bouncy airplane with a point and shoot camera, but these things are seriously impressive! 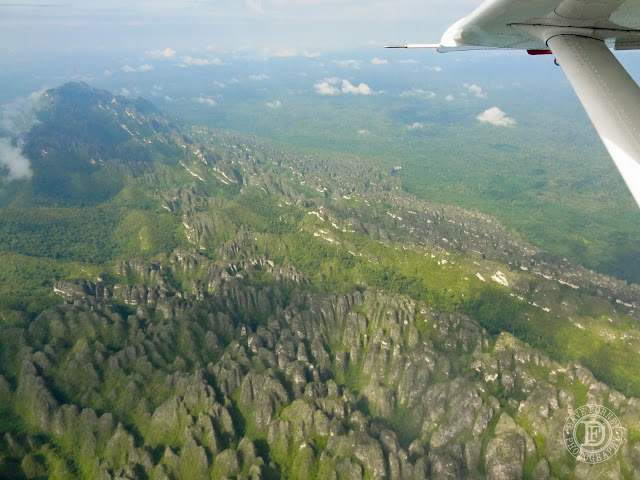 It's literally miles upon miles of sheer rock spires and cliffs and caves in the middle of the jungle!  Nothing much seems to grow on them or in between them.  It would be an awful place to have an engine failure, but a really sweet place to explore!  I think I just got a new idea for a future trek!! :)  Anyone wanna join me? 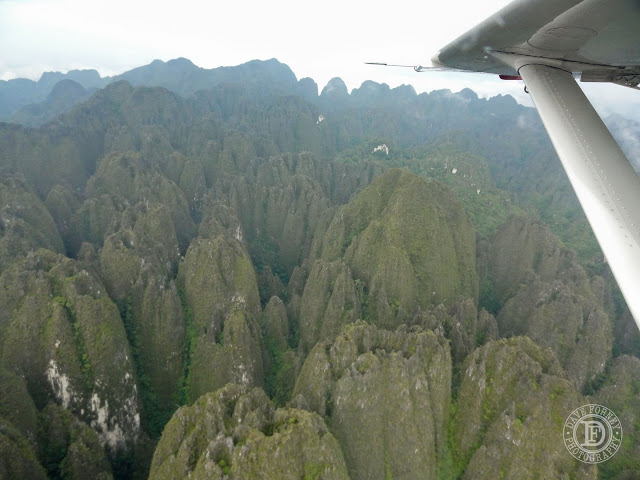 MAF used to have a base in Samarinda but eventually closed it, for among other reasons, the fact that it was getting so dangerous on the runway.  The runway is literally carved out of the middle of a very densely populated city.  The approach and departure take you directly over the roofs of houses and mosques, which also line both sides of the runway very closely.  Since the time when MAF moved out, the conditions have improved a lot.  Though the runway is still surrounding by dense buildings and population, the runway is controlled tightly and we haven't had the issues of the past with people and vehicles running out in front of us on the runway. 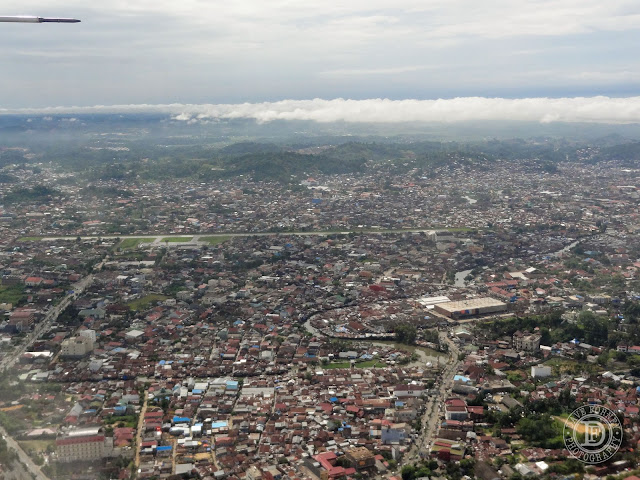 We still have an old hangar and a employee there and he helps with the arrangements for a flight like this.  After we loaded up the pastor's body the large crowd gathered around the plane for prayer.  It was touching to see how extremely grateful the family was to me and to MAF for helping them in such an important matter.  Likewise, when I landed in Malinau (another 1 1/2 flight) we were greeting by hundreds of people, all offering their deep gratitude for the help that we provided. 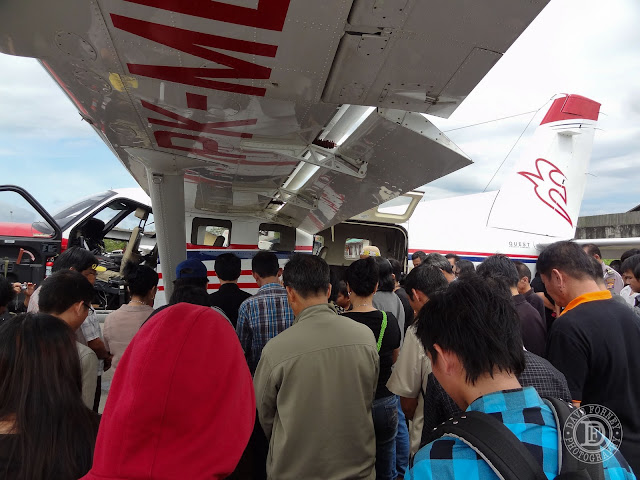 That's a bit of what's been going on this week.  We're missing "our Joy" as she's thousands of miles away.  But we're so excited for the opportunity that God's given her, and proud of her for taking it.  In the meantime, we're holding the fort down here, and having fun doing it! :)
Posted by Dave at 3:46 PM

Like I have said a few times now, every post is great. Kids in modern western cities don't have enough fun these days - parents are too worried and the media tells an unbalanced load of negative, scary stories.

Your kids however, Dave and Joy, are growing up COOL! They are allowed to - nay, encouraged to - be young adventurers. We grew up like that and we're grateful to our parents every day for the courage and common sense those adventures built up in us.

Sounds like you guys are having a great time even though Mama is gone!

Oh, and those pictures of the "badlands"? It looks JUST like Papua!!!

You are a rock star. Seriously. You are the most amazing husband and father EVER! Thank you for helping me to relax knowing that you have it all under control! I love you!!
Joy

I'm feeling for you all, Dave. My Mama's gone for the week, so I get to do all the chores and feeding - of animals and brothers! You're in my prayers.
Hold the fort!

Hi Dave,
just thought I'd say that your little story about you and Tyler in the jungle was special. All of the sudden I realised that is what it is like with us and God. We keep saying, I'm OK Dad. and He holds our hand tight and says, yep, you're doing great.

Like the Bible verse...
...Though he fall, he will not be cast down for the Lord upholds him with his hand.

Thanks for serving Him there.
Sandy in the UK