Our Little Pack Rat (And other animals)

So last week our little "pack rat" had an actual pack rat in her closet.  It's no secret in our family that Hannah loves to collect things--anything and everything.  If we're throwing it out, it's a priceless treasure for Hannah, and she wants to collect it and keep it.  We often joke that she's our little pack rat. 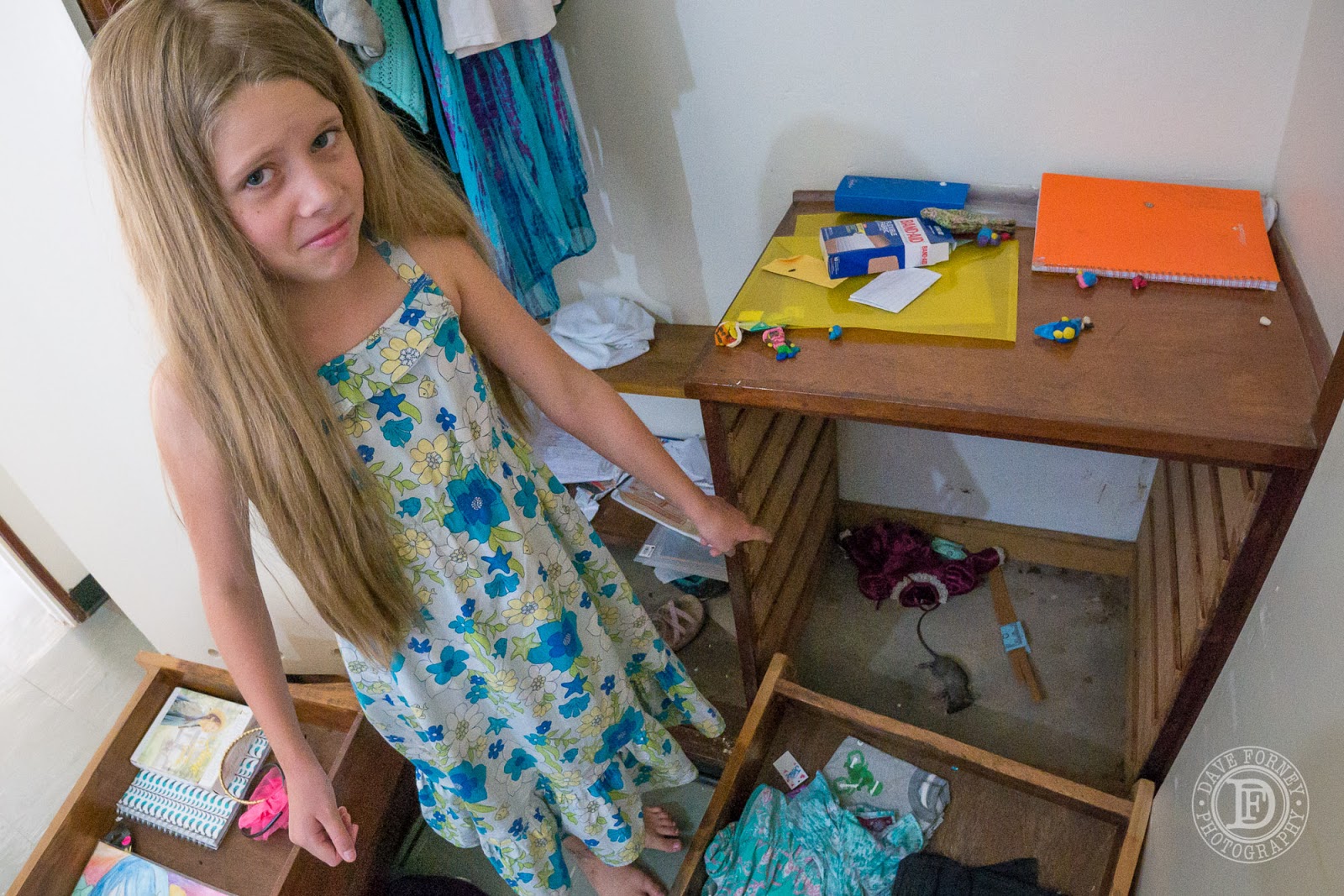 Well, it wasn't a joke last week when Hannah informed me that she heard "rat noises" coming from her closet.  I looked it over briefly and thought there was no way a rat could get in through the doors--they fit too tightly.  So I told her not to worry about it.  The next night she said she heard it again.  And the next.  So finally, armed with a flip flop (I might have gotten something more substantial had I actually expected to find something) I began pulling all of Hannah's priceless treasures out of her closet one at a time.  The pile in the center of the room grew ever larger...but still no rat. Finally I pulled out the last drawer at the bottom of her dresser and guess what popped out?  Yep, a real, live rat--a pack rat!  A few well placed blows with a flip flop dispatched it, but Hannah was absolutely horrified that a pack rat was living among her treasures.  And despite the extreme irony of it, and the jokes from her siblings (and daddy) she insisted that it was NOT because she was a pack rat. :-)  But we all had a good laugh over it.  Here's a shot of the newly deceased. 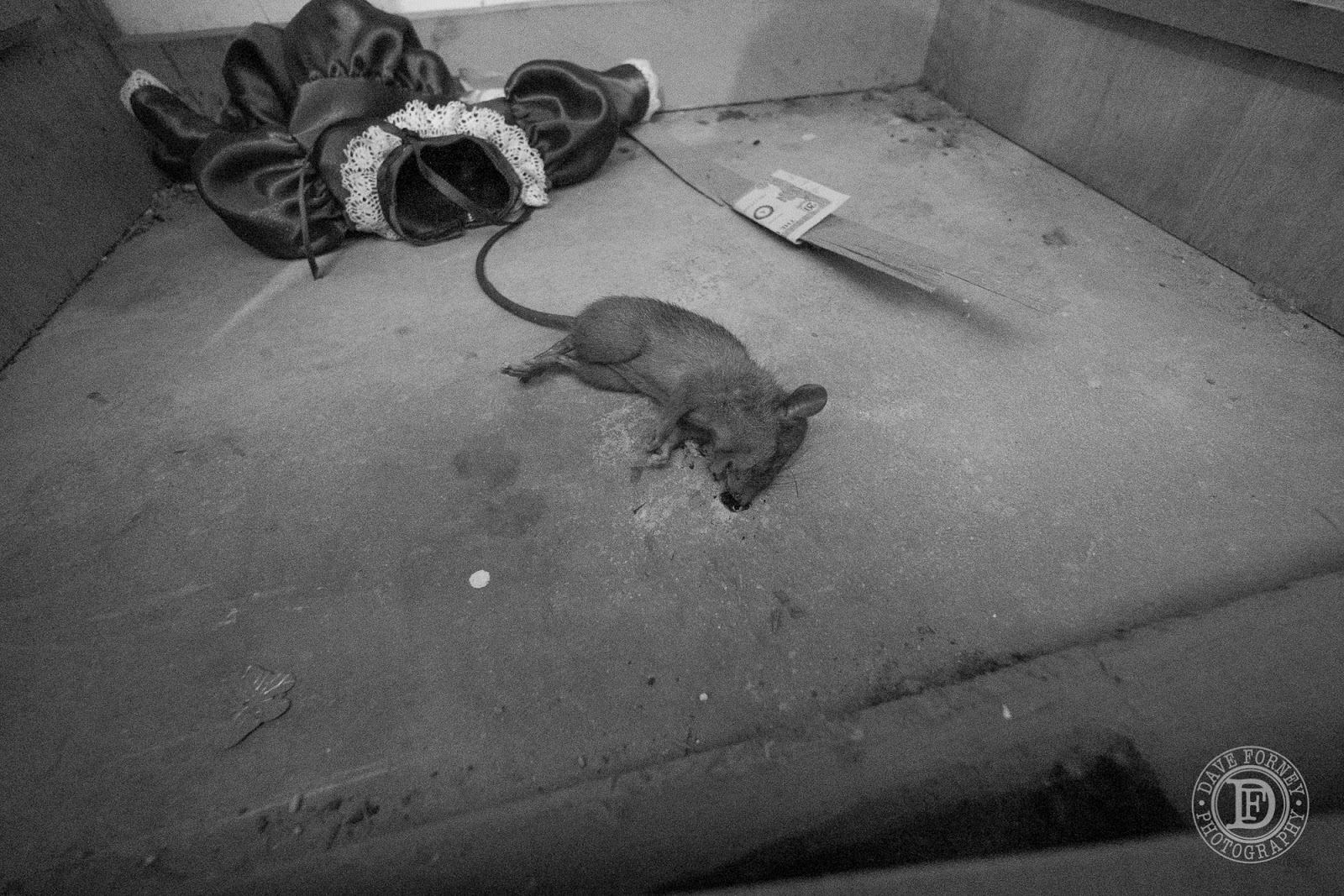 Speaking of being horrified, a few days later I came down in the morning to make some coffee.   It was about 5:00am and still dark outside and Joy had just walked into the kitchen a few seconds before me and claimed she'd seen a rat scurry across the kitchen counter.  I looked around and thought, there's no where for a rat to hide here...they wouldn't be dumb enough to come out into the open like this.  But I pulled the toaster out just to put Joy at ease and guess what popped out?  Yep, another rat, though a tiny one.  The only thing available were the flip flops that I was wearing which chocked up kill number two!  Who needs a rat trap when you're wearing an old pair of cheap flip flops? 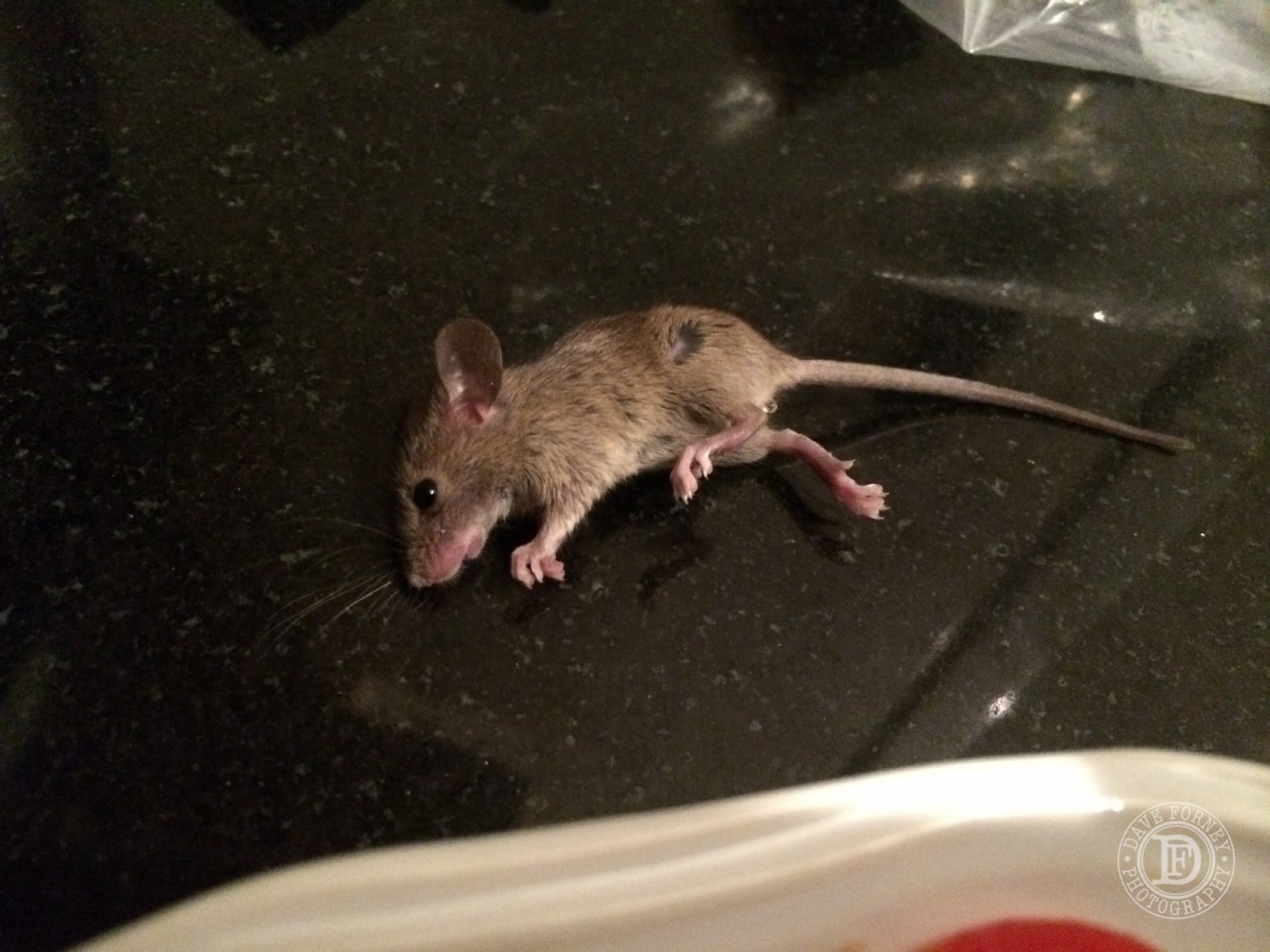 Now, in order to balance out the disgusting-ness of rat pictures, here's a shot of one of the pretty little birds that frequents the flower bush just beside our porch in the early evening.  Some day I want to walk around and take pictures of all the birds and butterflies and flowers in our yard (or garden as the Brits call it), but I just don't seem to have time for that yet. 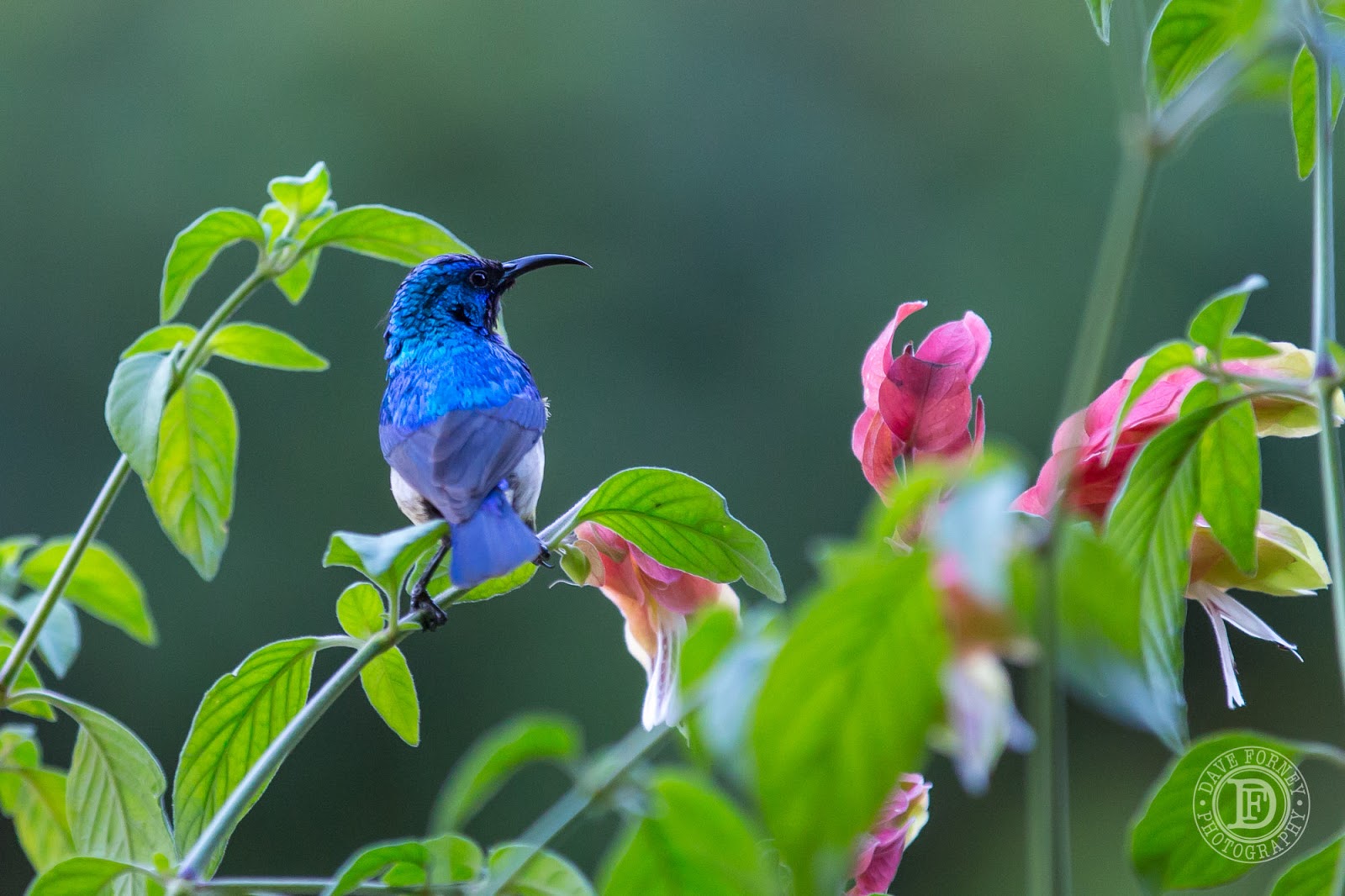 Since we're on the theme of animals, check out these ape hangers!  OK, so it doesn't really fit into the animal theme exactly, but I still wanted to show you.  For those that aren't into motorcycles, "ape hangers" are a term used to describe the modified motorcycles where they make the handlebars super tall, so that the rider has to put his hands way up in the air like an ape while riding.  This guy could just barely reach them with his fingertips.  And the best part--he was riding while talking on his cell phone, although when I took the picture he had briefly stopped at an intersection. 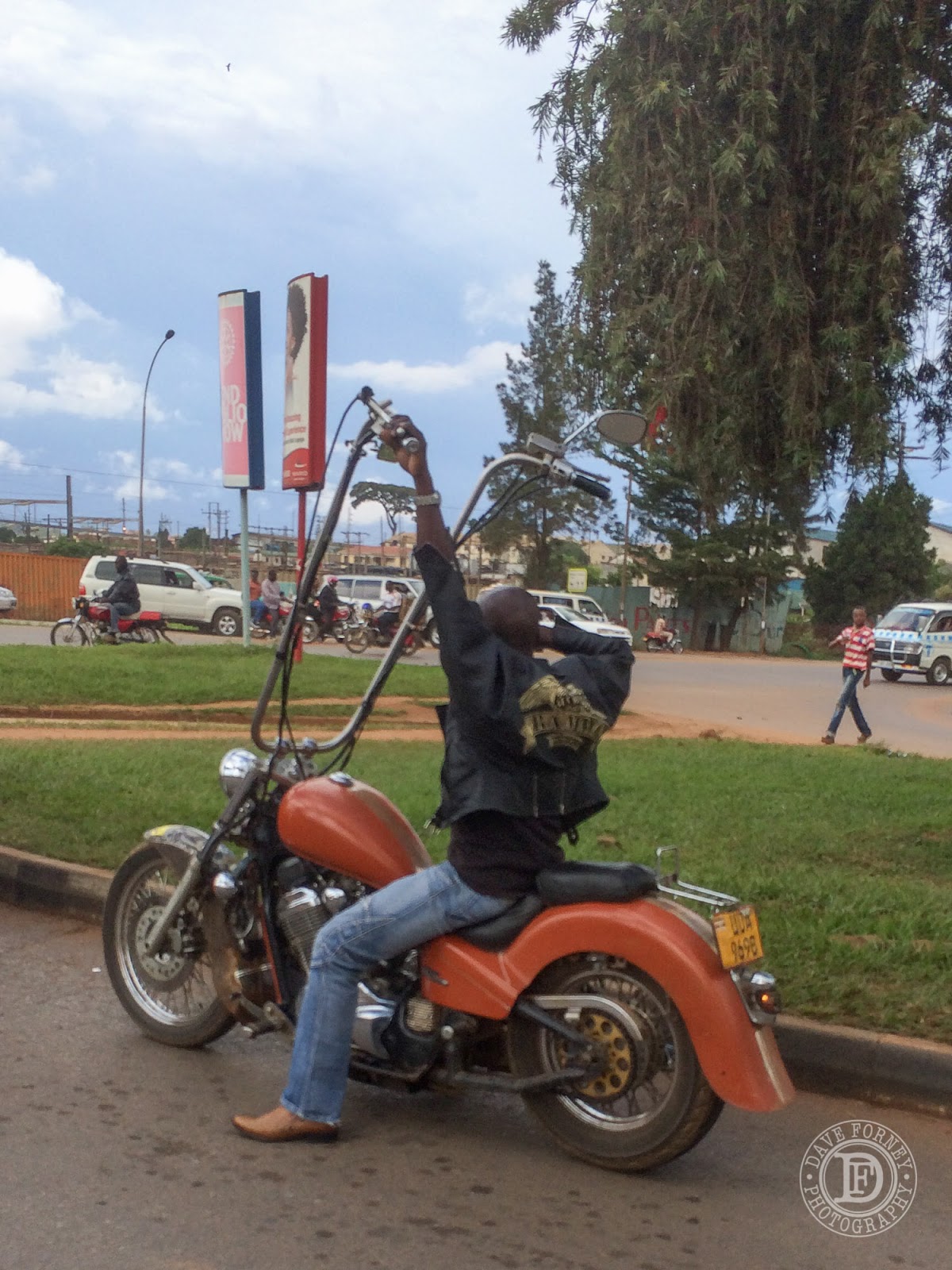 Two weeks ago I had to fly in to pick some people up from the very exclusive Chobe Resort on the Nile.  They had done some short-term mission work and then took a few days here to unwind.  I took a picture just to show you how gorgeous it is.  The staff invited me to bring my family back and stay there some time.  I looked at the prices and ummm, yeah, we'll never be staying there.  "Sorry kids, no college for you--we went to the resort for a few days instead."  But it was nice to get to see it anyway. 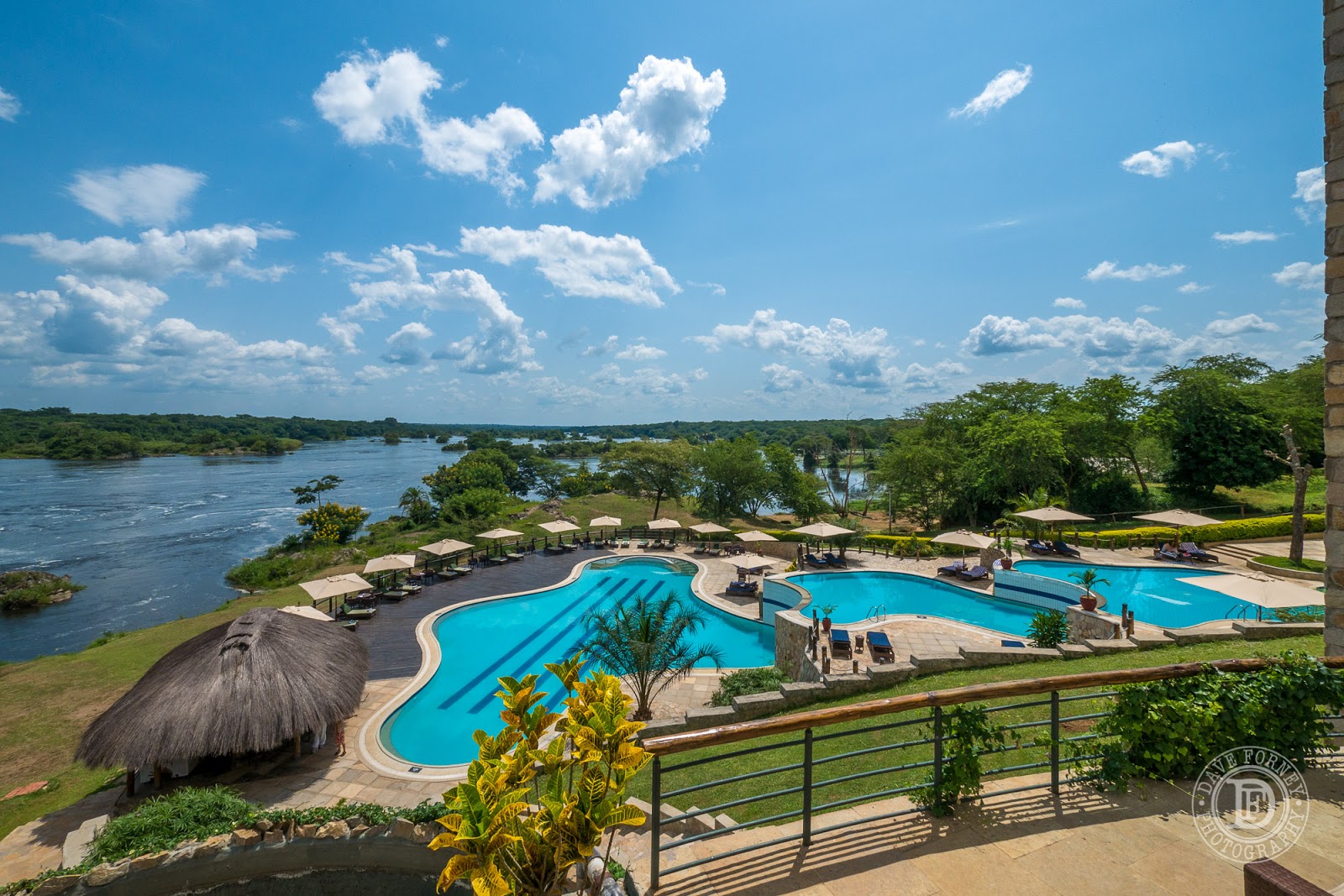 And while I was waiting for the passengers I did get to walk around a bit and managed to see a few African animals other than the cows, goats and birds that is basically all we get to see around the city.  I didn't have my "good" camera with me, so I couldn't get really close-up shots, but at least I can prove that I've now seen a hippo and some warthogs.  I also saw some buffaloes but didn't get a picture of them. 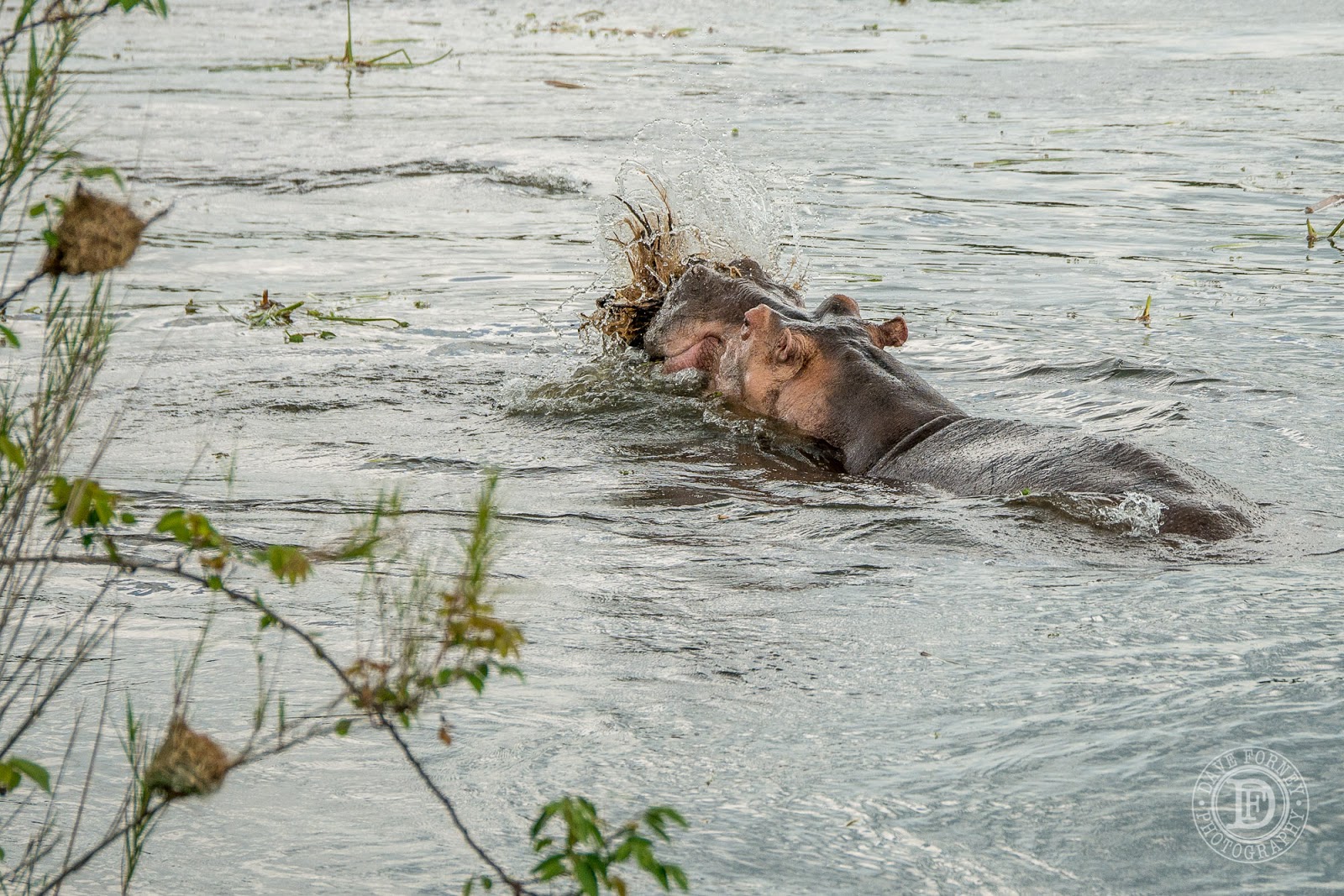 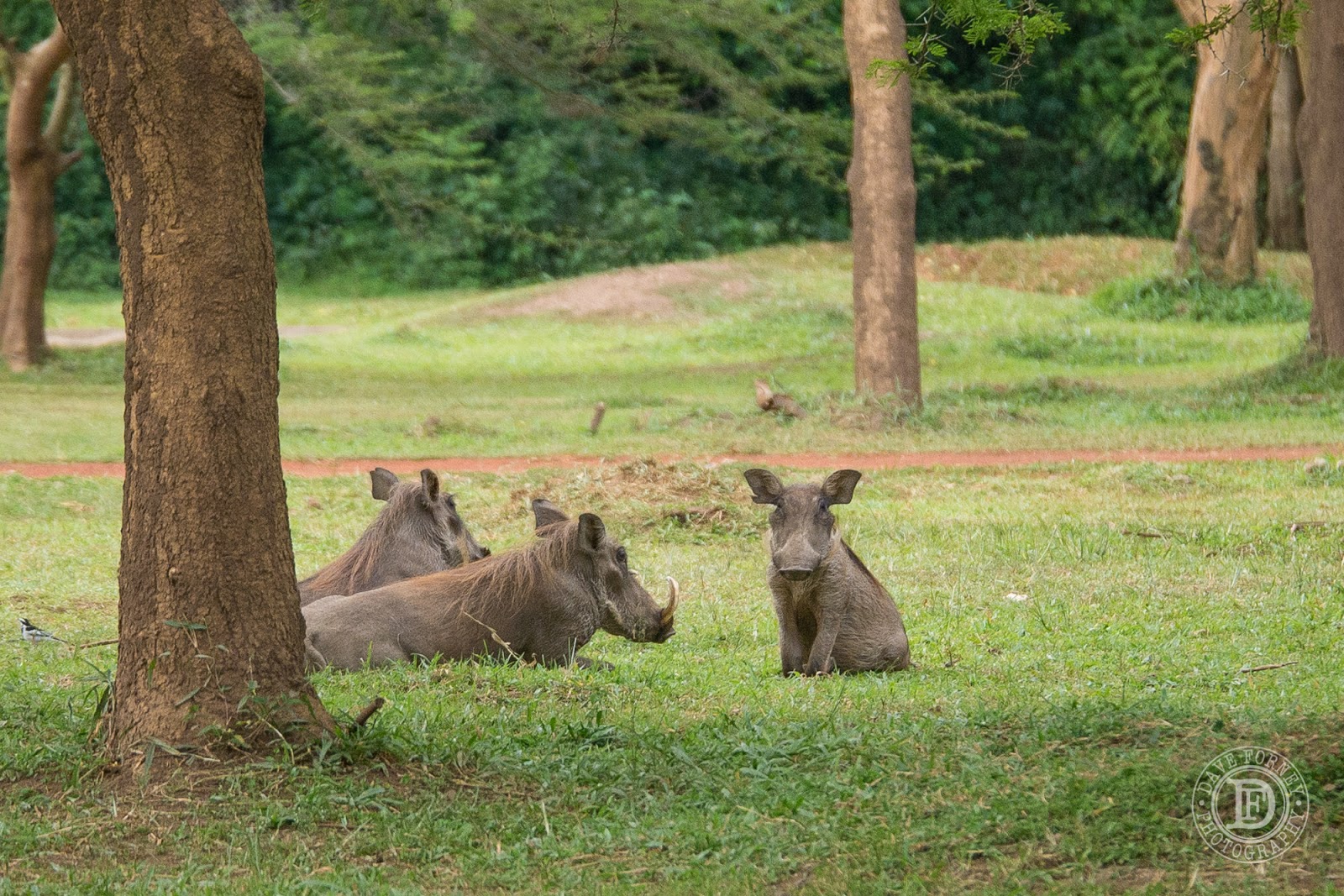 Sometime we're hoping to do some camping (more in our price range) and then I'll hopefully get some shots of some of the other African wildlife.
Posted by Dave at 8:54 AM

As an Aussie girl, I can only agree with you on the power of the flipflop. We never used them against snakes of course, but for the average household intruder, a flipflop gives you the perfect quick solution! Living in Switzerland now, there's less need for flipflops all up, but gees, when I spot an intruder, I'm the first to reach for my foot for my household pest solution :-)

All the best to all of you, and your flipflops, Ali

Ha! That's hilarious that you can relate to the flip flop Ali. Most people would think we're nuts. :-)

Okay. believe me, these are not rats. these are mice. You Don't want a rat in your house.
Love the wee blue bird.
I have been praying for your funds situation. I trust God is providing.
Sandy in the UK

Never used the flip flop method, but did grab up a shoe to throw at a trespassing dog -- and then asked a friend to go retrieve my shoe!
My condolences to Hannah. I know that rodent invasions are not fun. Sounds like you need a professional cat!

Sandy, I'm admittedly not a rodent expert, so I'll take your word on it. But regardless, we'll pretend these are rats b/c it fits the "pack rat" story better. However, I can assure you we definitely have had plenty of real rats in our house back when we lived in Indonesia. They were often 12 inches long or longer and probably weighed more than a pound! The one in Hannah's closet was about 6 or 7 inches from head to tail, so it was much smaller by comparison. But the looks were more similar to the rats in Indonesia, rather than the mice. So I just assumed it was a young rat. Unlike the birds in an earlier post, I didn't bother looking it up to see what it was exactly. :-)

Arielle, I think you might be a right...a cat might be in order. I'm thinking my kids would probably like a lion or a leopard. Ha! We had a cat in Indo, which was the coolest cat ever, but very fat and lazy. He was great for the kids to play with, but wasn't much of a mouser. But the other problem we're having here right now is the monkeys coming into our garden and steeling vegetables that are almost ready to pick. So we're trying to get our puppy to be more protective as well. Maybe we should get a goose!

just teasing anyway Dave. I grew up on a farm and remember the dogs tearing a rat in half!
Sandy