Here's a shot of a little rainbow (there's a very light second rainbow up a bit further if you look closely) framing the sun's rays as they pierce a dark and stormy sky about 130nm North of Kampala.  The sun's rays were so focused on that one spot that I found myself subconsciously looking intently there for the secret that was being revealed. 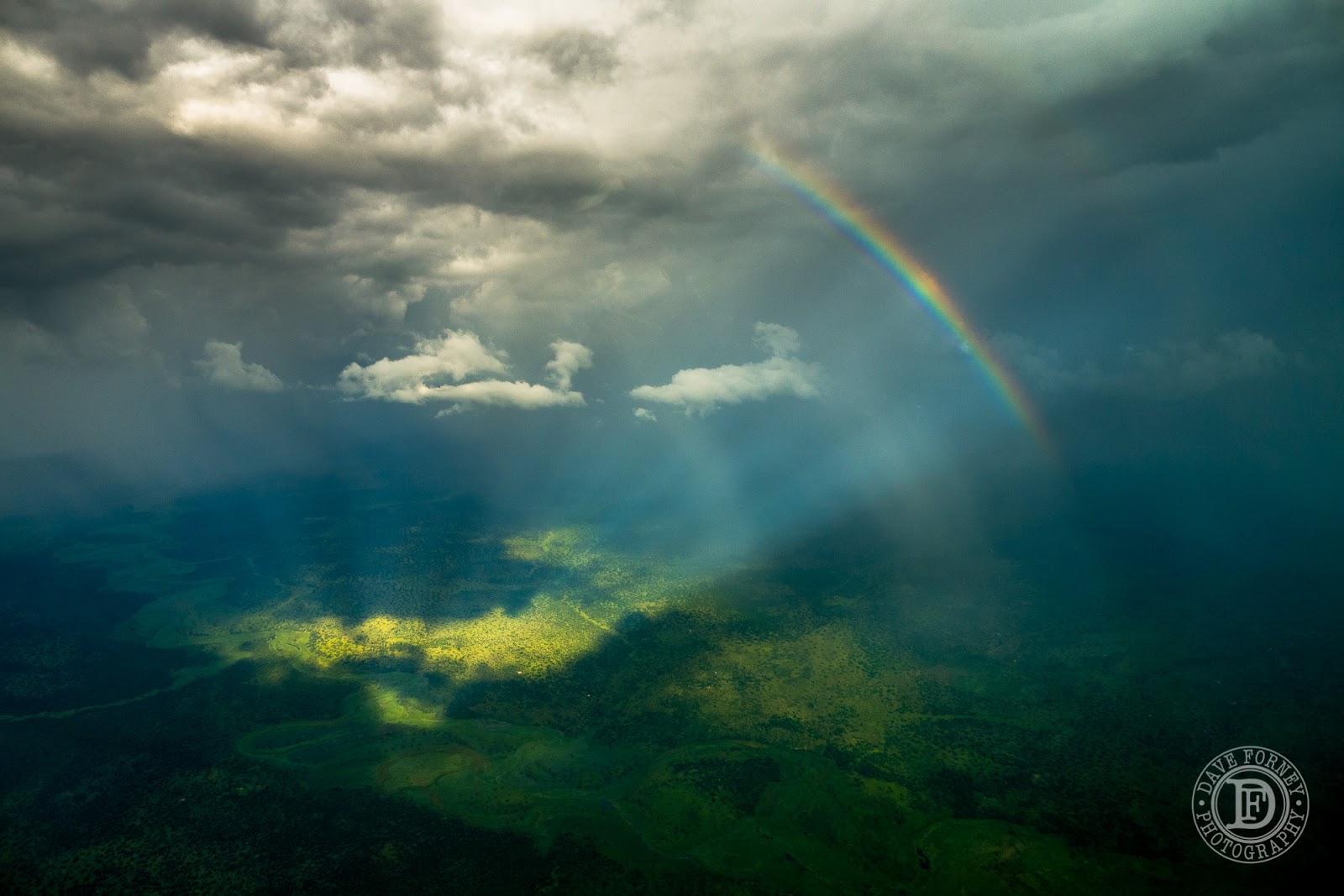 And this is the River Nile, also on a dark and stormy day, as it flows through Murchison Falls National Park a bit north of the where the picture above was taken.  If you look closely, you can see the falls themselves--the very skinny portion of the river just below the bend in the center of the photo.  At that point, almost the entire volume of the Nile is shoved through a tiny slit in the rocks just 7 meters wide!  Apparently it's quite a site to behold up close.  Some day I'm sure our family will visit.  Below the falls the river is teaming with giant Nile crocs and hippos and all kinds of birds and other wildlife.  You can take a boat ride from a place a few miles downstream, right up to the base of the falls, and see all of the animals in and along the banks of the river.  But I don't think you'd want to swim in this part of the river, unless you intend to help feed the wildlife. 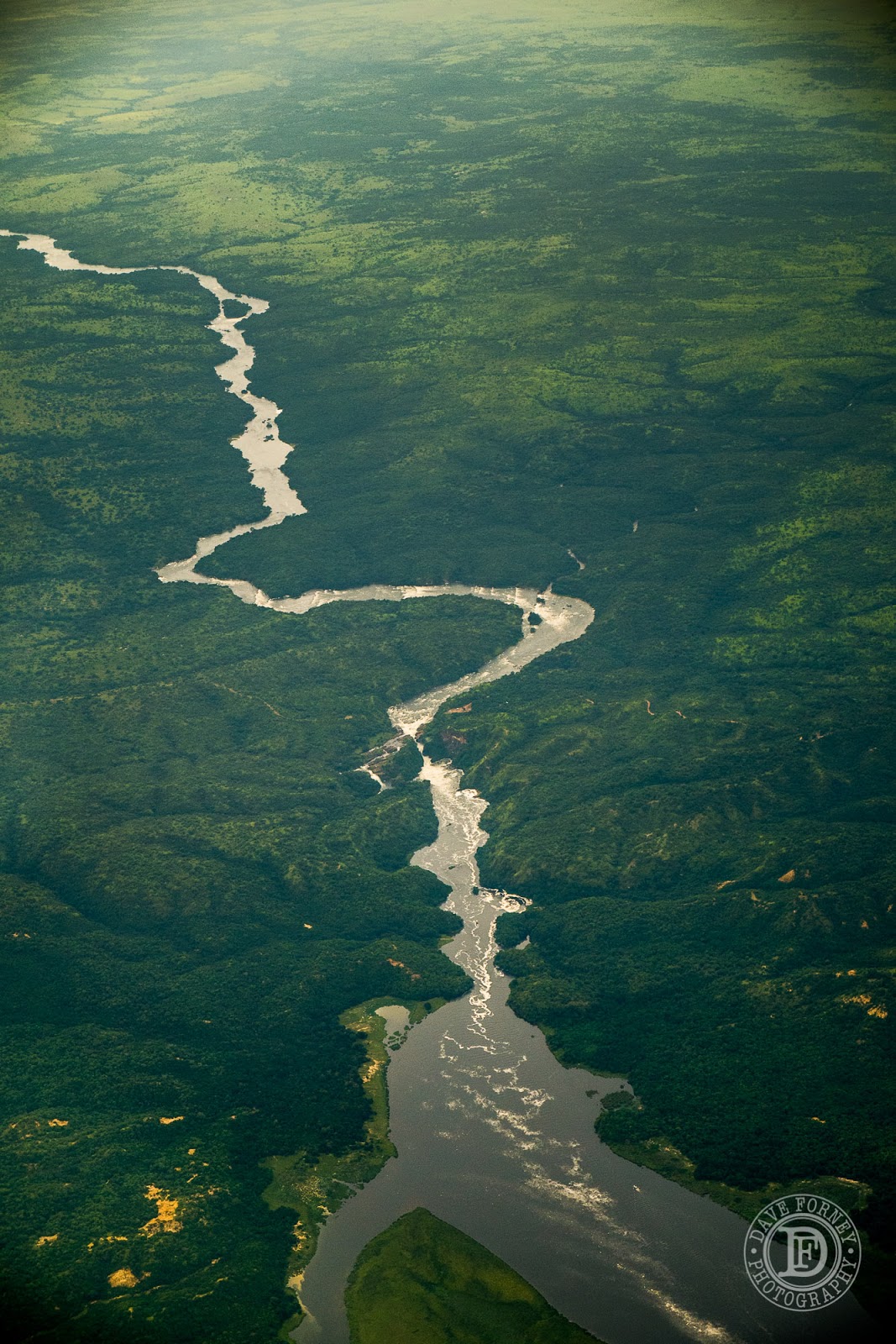 This is what Murchison Falls National Park looks like on a nice weather day.  This is just a few miles downstream from Murchison Falls, above.  Here, you can see the delta where the White Nile flows into the northern tip of Lake Albert.  It then exits again from the lake, not far away, and continues to flow north, up into South Sudan, and then Sudan where it's joined by the Blue Nile and continues all the long way up through Egypt, finally emptying into the Mediterranean Sea.  In the picture below, just to the right of that delta is a fertile grassy plain, where the giraffes and elephants and buffalos and lions all kinds of other wildlife roam freely.  One day we look forward to getting up there and doing some camping and wildlife viewing! 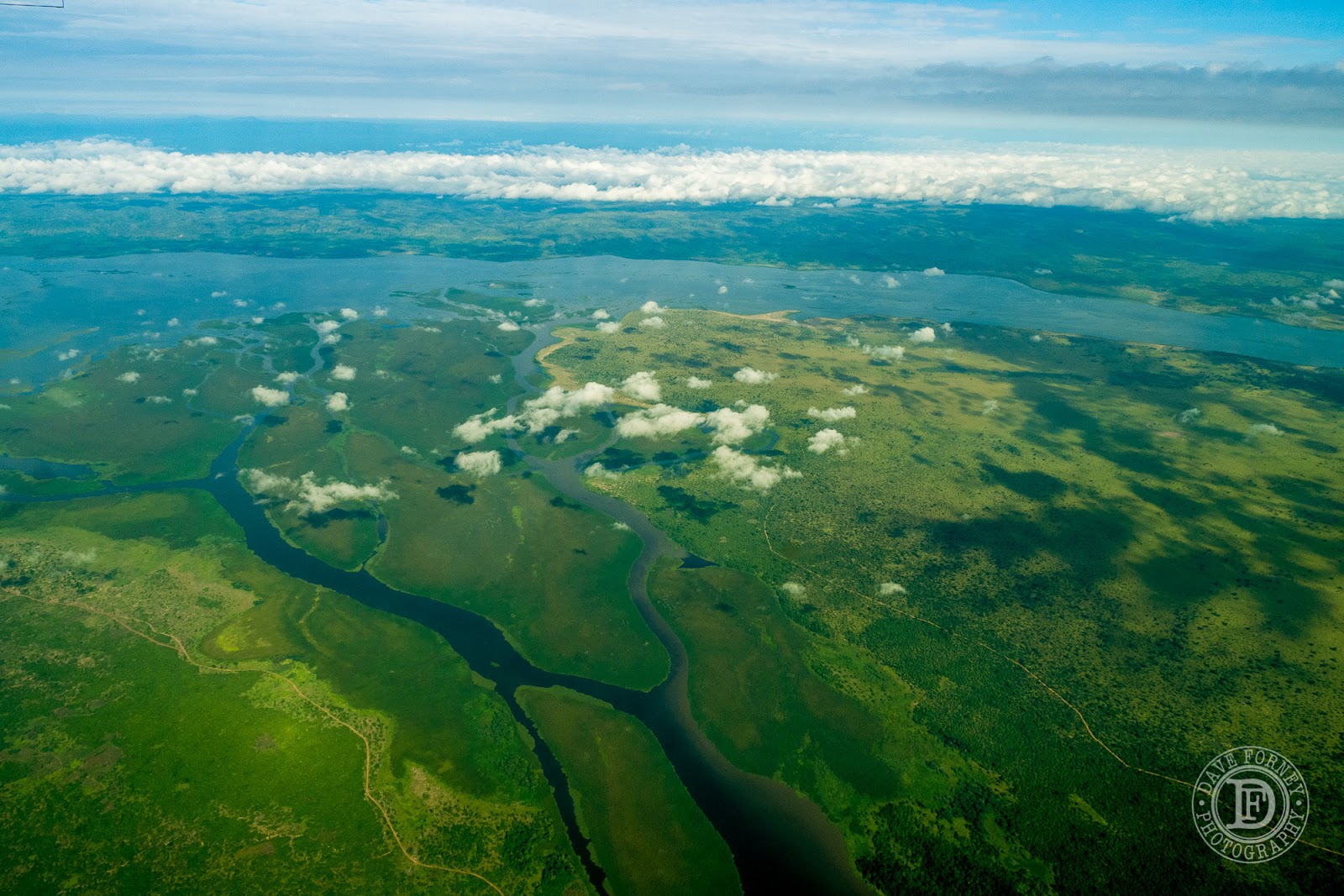 Back to rainbows--here's one that I saw (the double rainbow is much clearer in this shot) on my way back to our home field of Kajjansi one afternoon.  This is just on the outskirts of Kampala, the capital city.  Everything looks so clean and fresh and colorful in this photo.  Most of the roads are dirt, however, so it only takes a few days without rain before the dust begins to cover everything.  Yet even then, there's a beauty, uniquely African, that can be found in the red-dust that covers everything. 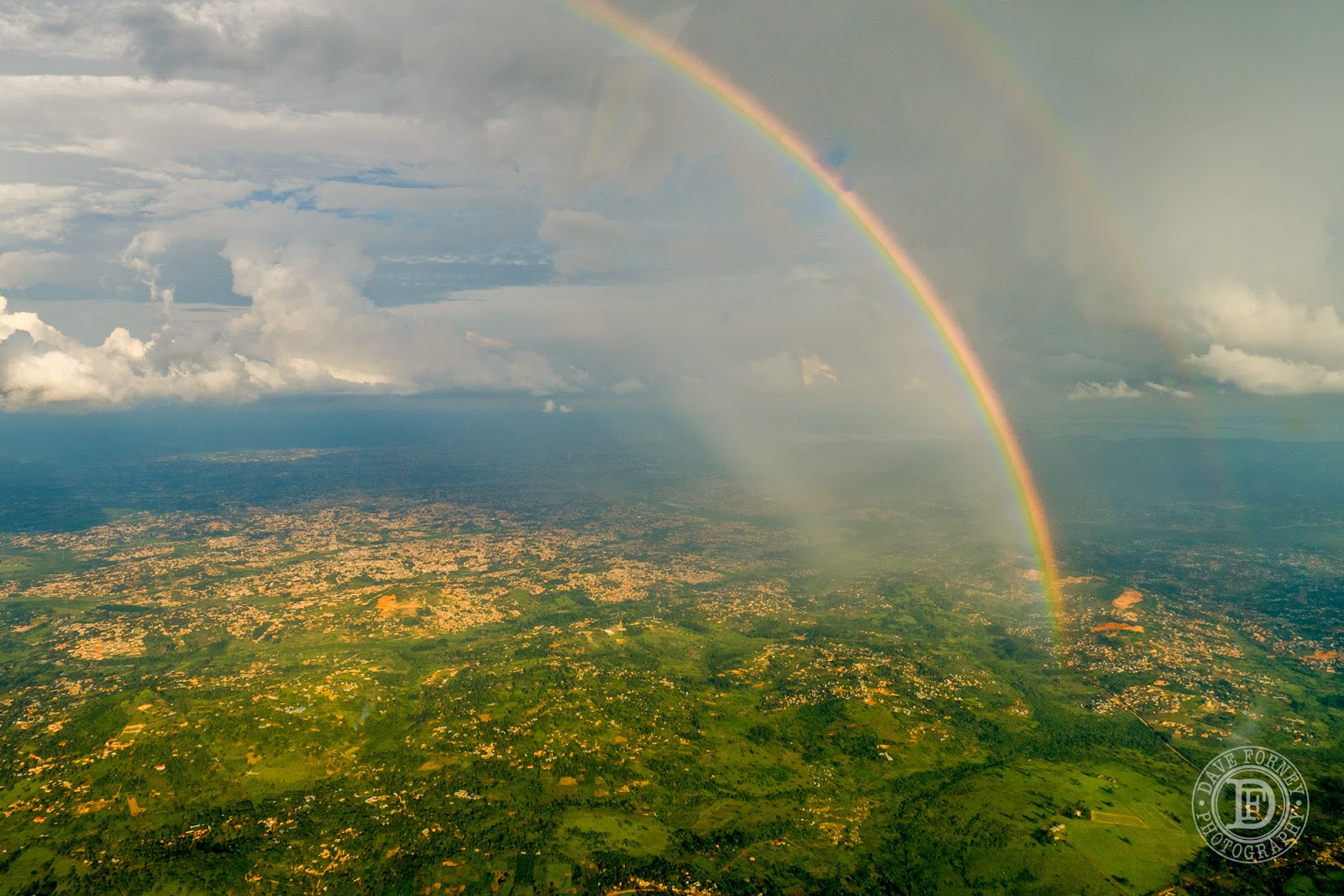 Here's a shot of our Kajjansi Airfield, MAF's little home base airstrip here in Uganda.  You can see the airstrip running across the photo in the center.  Just on the opposite side, in the middle, is the MAF hangar with the white roof.  And if you look closely you can see all the construction underway, to the left of the hangar, where they're building the new MAF office building.  Currently the office is in a small, rented house in Kampala city, a 30 min to 1 1/2 hour drive away depending on traffic. 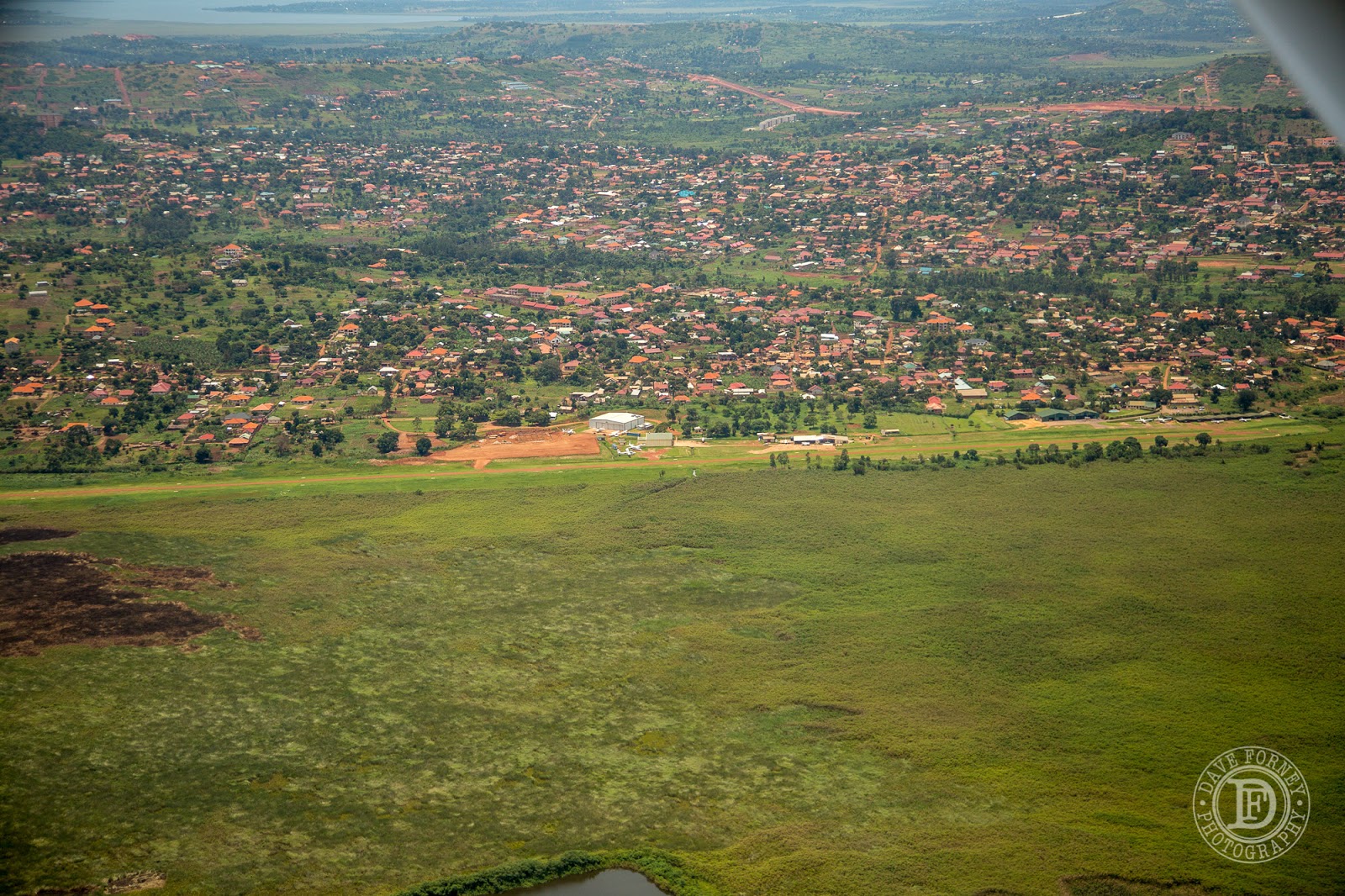 Since we're on the theme of rainbows, here's one more rainbow, somewhere up in central Uganda.  I love seeing rainbows from the window of my plain! 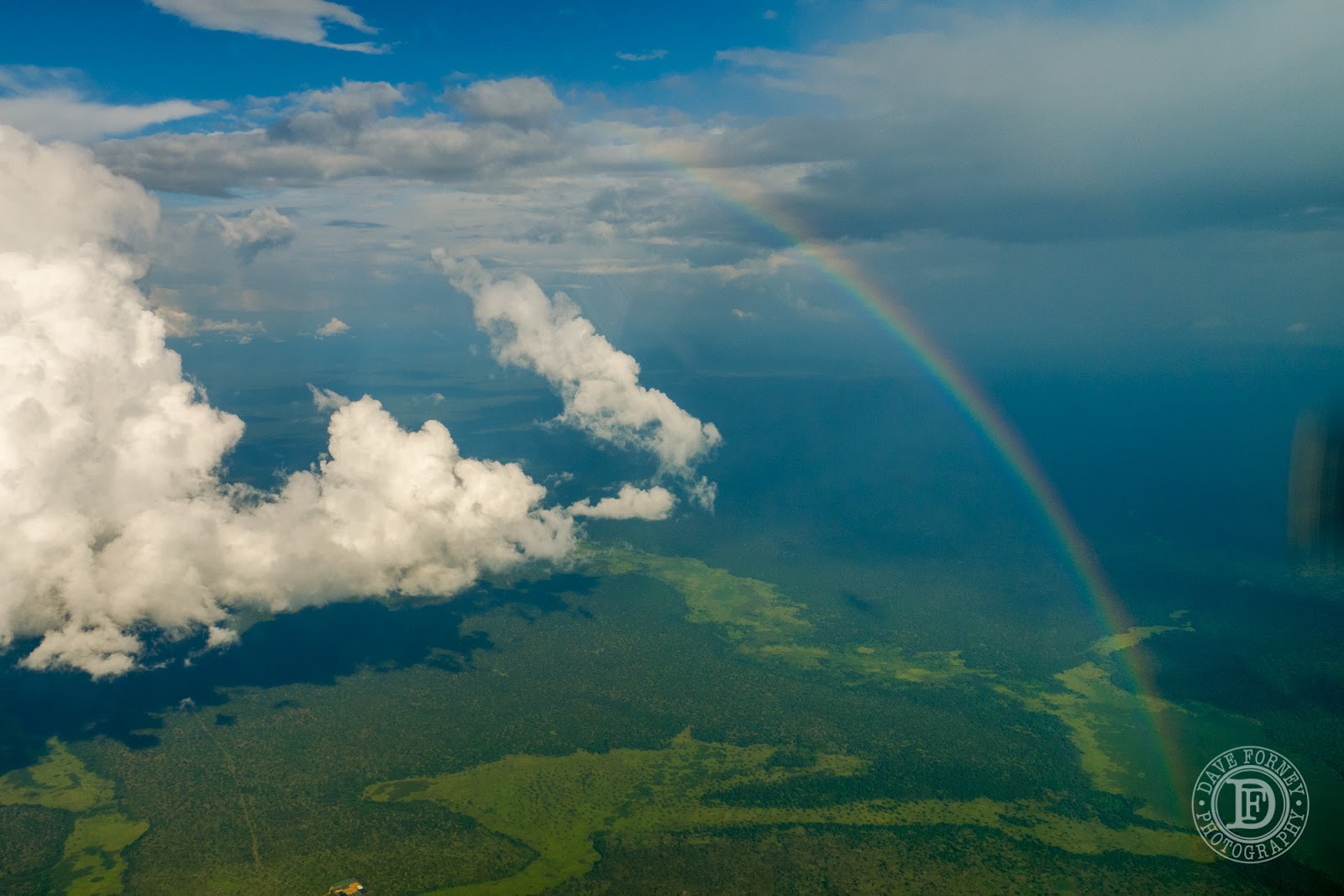 I haven't seen any rainbows out in Eastern or Northeastern Uganda yet--the weather up there is generally much more aired.  However, it has a beauty all it's own.  I look forward to spending some time up in that area some day with my family.  We have some good friends from our home church that minister up in that area, and we'd like to get up to visit them at some point.  In fact, we'd love to even see how we might plug in and help with the ministry to kids up there on a regular basis at some point in the future.    My wife and kids really thrive in environments and ministry like that and

Anyway, right now the weather in that area is slowly changing from rainy to dry season.  It doesn't take long at all for the streams and small rivers to run dry, only visible by the bright ,sandy scars they leave through the vast plains.  Yet, right now there's still quite a bit of green visible.  I'm told that by December and January everything will be mostly brown. 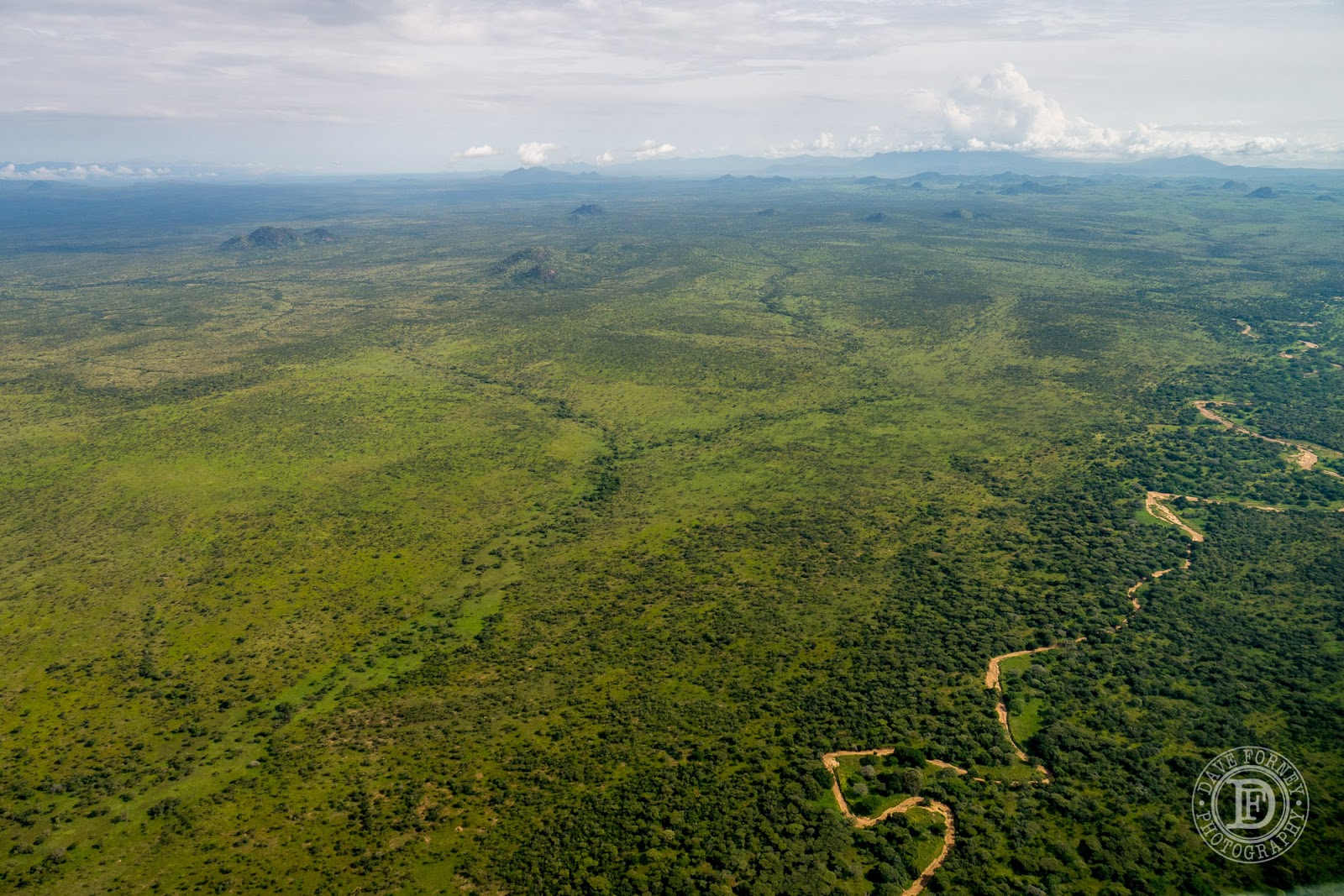 Check out all the little villages spread among the fields here.  Each one is comprised of anywhere from a dozen to a few dozen huts, encircled by a thick fence of thorn bushes.  This is the Karamojang area, and the people here are primarily cattle herders.  I often look down and see hundreds or even thousands of cattle, spread in small groups throughout remote areas, far from any village.   No doubt they're being led and protected by a few young boys or men, each wearing long colorful robes and carrying a tall stick. 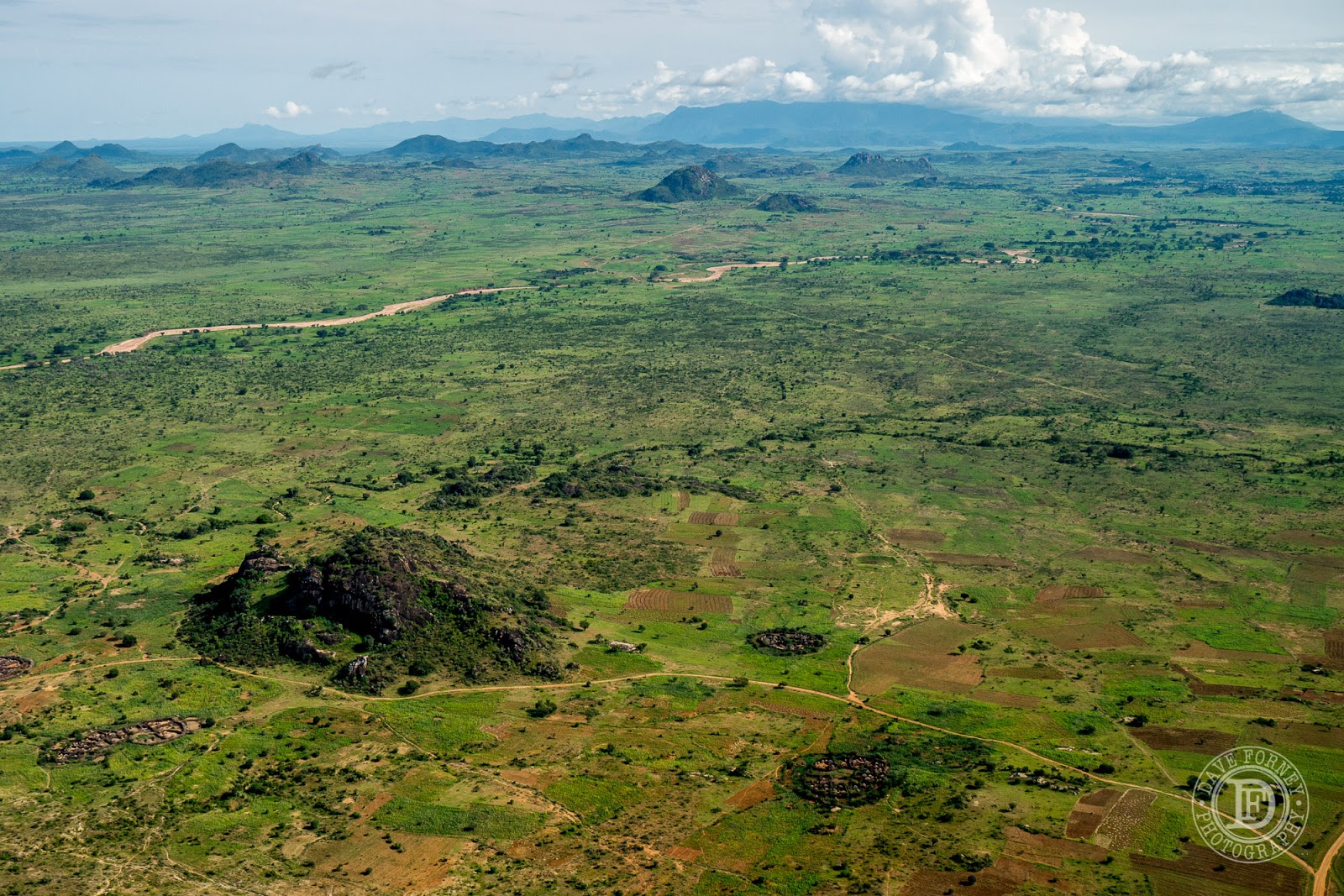 Here's a closer shot of a very large village.  Most of them are quite a bit smaller than this, but I thought this one was particularly scenic with the large rocks and fields around it. 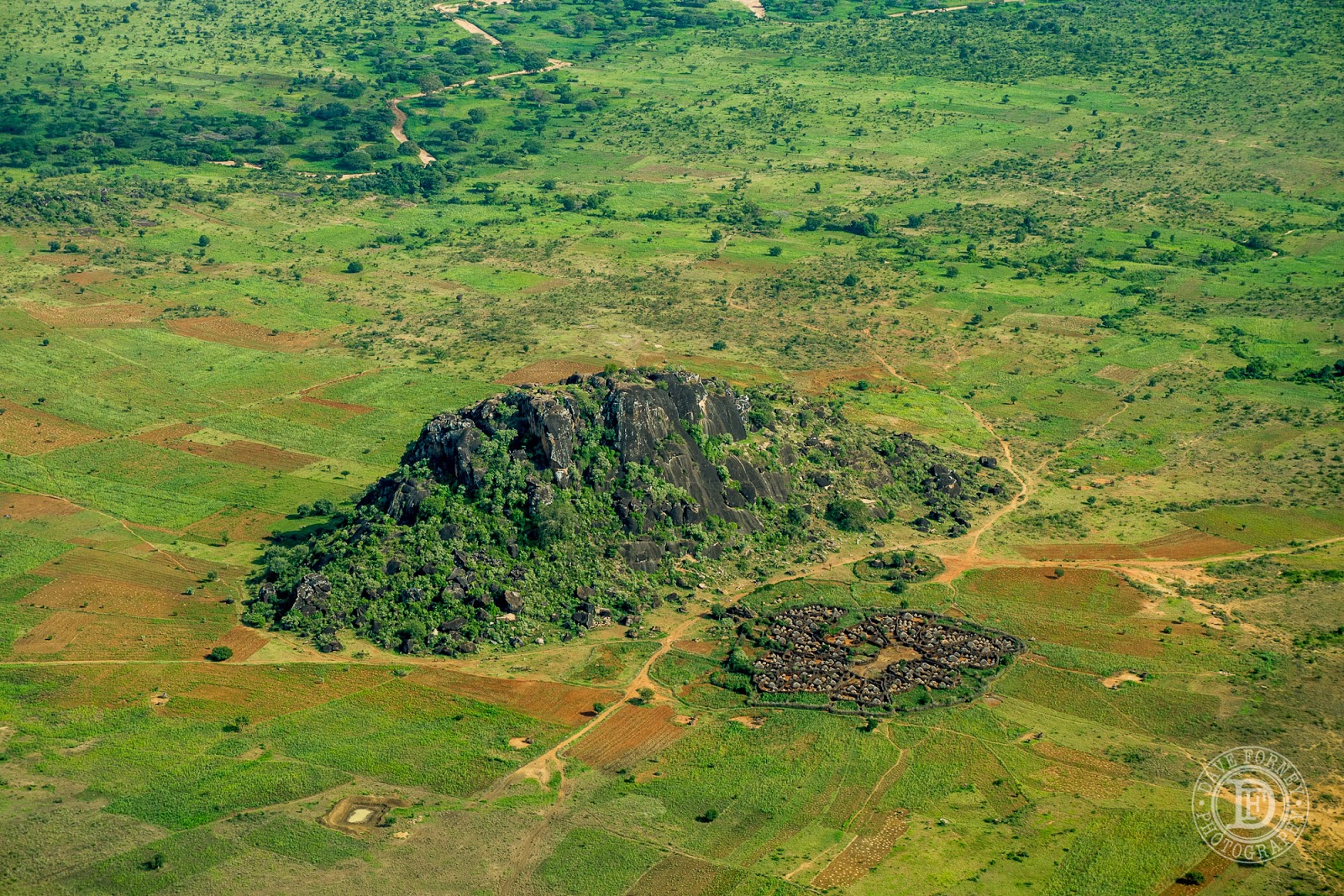 Although this area, and the people that live here, tend to fit right into the beautiful, stereotypical images of East Africa, just under the surface are hidden many years of violence, pain and turmoil.  Indeed, that's why many mission and aid organizations are focusing on this area, and that's why we serve them.  Progress is being made, but true change and lasting peace won't occur until they know the Prince of Peace.  And in villages where that has happened, many are indeed experiencing peace for the first time in years.
Posted by Dave at 8:29 AM