We survived! Friday evening Paul and I finally made it back to Tarakan after covering many rugged miles of wet, leach-infested jungle. Below, a picture of us with all of our kids just prior to leaving Tarakan the previous Friday morning. 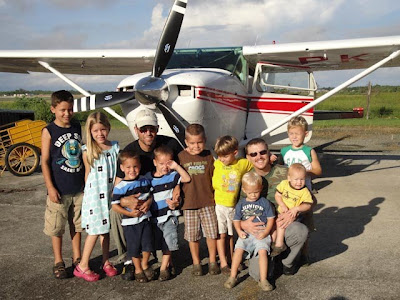 And of course a family photo before the big departure. I have a pretty awesome wife to let me go on adventures like this! And my kids were real troopers as well! Of course, all my boys are thrilled by the stories of jungle creatures that I encountered, and can't wait to go on future treks. 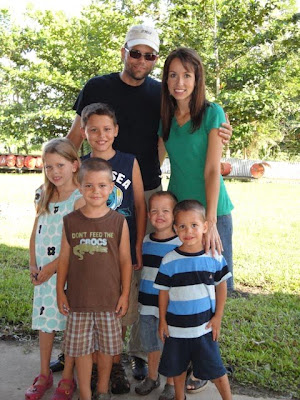 We flew 5o minutes in an MAF airplane to the village of Long Alango. From there we hiked a half hour up river past huge rapids, and then took motorized canoes several more hours upriver to the village of Apau Ping. On the way we stopped at an old stone burial ground near the edge of the river. Very fascinating. These are NOT clay jars. They're carved right out of stone and then capped with another large flat stone. The bones of the deceased would have been placed in the stone bowl. We were told that this site was at least a few hundred years old, but no one really knows for sure. 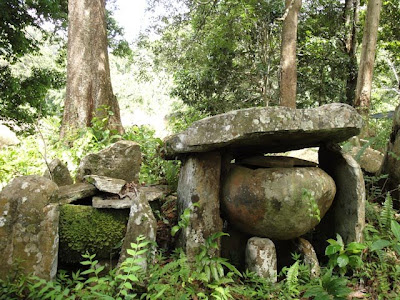 After spending a few hours in Apau Ping, we went another hour or so upriver to Long Tua. This involved getting the boat through some huge rapids, where we had to unload all the supplies and then pull/haul the boat up through the raging water and over rocks. Fun times! We arrived at Long Tua in the middle of the first afternoon. They've build a nice "Pondok" there, and this is where we spent the night. It's a nice place to start the journey as it's not a village, but also not quite jungle roughing either. 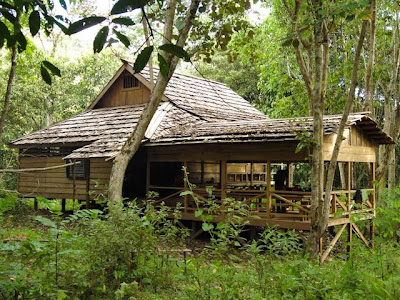 We weren't the only ones that enjoyed the place. A hive of honey bees had made their home in one section of the sleeping area. Obviously, this forced all five of us (Paul and I and our three guides) to cozy up in the remaining smaller area. 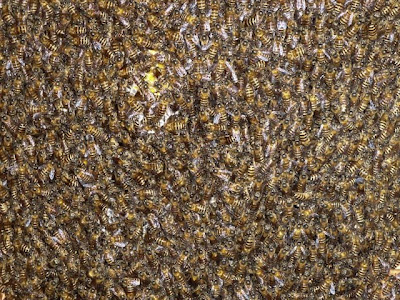 We had a few hours to mill around and enjoy the jungle beauty. 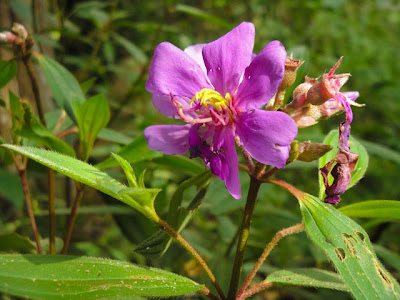 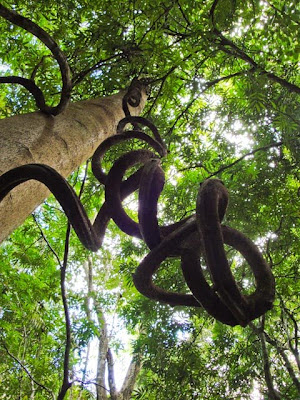 One of our guides caught a descent sized water turtle. While the other guides were cleaning and cooking the turtle for dinner, the rest of us made our way to the nearby "Padang Rumput" (grasslands). This is an absolutely gorgeous area where the jungle gives way to beautiful hills covered by thigh-high grass, sprinkled with flowers and berries. Obviously, it's a great place to spot wildlife in the late afternoon. If you look close you can see Pak Andris, one of our awesome guides and good friends, enjoying the view near the left side of the picture. 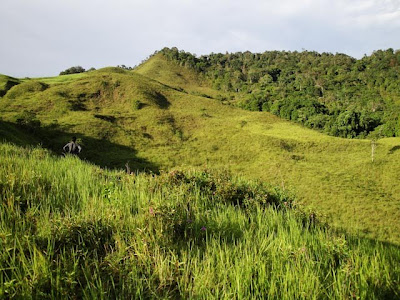 What we were really hoping to see was a Tembadau or Banteng. These are wild cattle-like animals, that live in the jungle of Borneo. They're actually quite rare now, but often come out in the evening in to feed in the grasslands. This is one of the best places in all of Borneo to see Banteng. The males are black, and the females and young are reddish-brown. Both have white rumps. After enjoying the views for a while we finally spotted a male on the opposite hillside, probably 500 meters or more away. Sorry, this is the best picture I could get with my little Sony point and shoot. I didn't take my good camera on this trip because I already had a very heavy pack for one thing, and secondly the conditions are extremely taxing on any electronics. My little Sony is WAY cheaper than my Canon 7D. 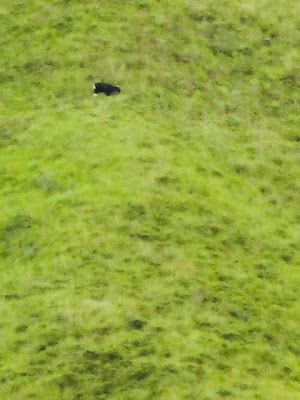 A few more Banteng came out, and we enjoyed watching them until the sun set and it began to get dark. I wish you could hear the jungle at night. It's a beautiful sound--full of insects and creatures of every kind. 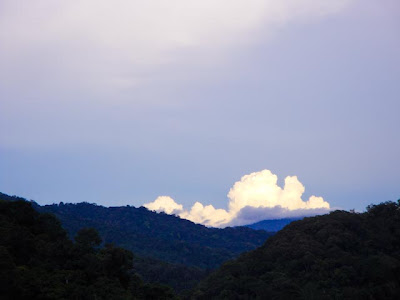 Anyway, it was an enjoyable day...but things were about to get a whole lot harder, and sweatier, and stinkier, and bloodier, and--well, you get the idea. Tune in later for the next part of the story. By the way, Paul and I focused mostly on video, rather than pictures. Our little cameras shoot HD video, so we're putting together an HD video version of our trip, which will obviously be way cooler than this blog. But I'd never be able to show that on here, so these little pictures will have to do.
Posted by Dave at 5:20 PM

Wow! You live such an amazing life! God has truly blessed you with a beautiful family, and I pray that as He sends you out on many more 'adventures' His guiding hand of protection will be with you :)

Still enjoying your blog and have been waiting for the Jungle trek story since I heard you left Tarakan.

Im so blessed by founding your blog! My children and I are doing My Fathers World for school ( we homeschool) and today we are reading about Nate Saint. Now he was part of CAMF but you do the same things. How neat it that. I totally smiled by reading this.Bless your heart.How amazing that must have been. GOd bless

Hey Forney! Glad you and Paul made it back in one piece. Many answered prayers. Always look forward to your adventures into the "sticks". Tell Hopkins hello for me. Heard he's driving the Caravan now. What fun!

Dave, that little jungle house reminds me of the Nate Saint house in Shell Mera, Ecuador. Last time I saw it it was also very bug-infested, but with giant cockroaches.