For the next five days we trudged mile after slow, soggy, sweaty, bloody, tiring mile, heading north through the mountainous region that separates the Bahau Hulu area from the Krayan region of Northeast Kalimantan. Like our trek last year, this year we were also going from one distinct region and river system to another, a very long and arduous hike that very few people have done--or would do on purpose for that matter. Does that make us crazy? 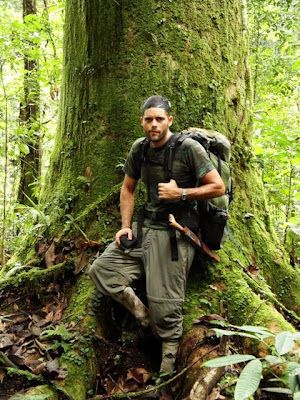 Here's an interesting fact for you: we could have spent a comfortable, quick, eight minutes in one of our little MAF airplanes and covered the entire distance that it took us five grueling days to cover by foot! Our entire seven day trip (included the two days by boat) could have been done in about 17 minutes in on of our planes. There's just simply no comparison out here when it comes to traveling by foot vs. taking an aircraft. No elderly person or child or pregnant woman, or a sick or injured person could have made the journey that we did by foot. It's simply impractical and often impossible for most people to travel long distances by any other means other than via MAF out here in the jungles of Kalimantan! It's such a privilege to be serving the people here by meeting such a practical need.
This time we didn't strike out when it came to meat. The second day we got ourselves a little jungle pig, just the right size for roasting and carrying along on the trail. 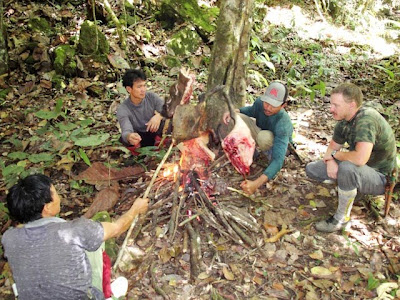 Our guides also snagged some wild mushrooms that tasted awesome later that night, fried in pig fat over the fire with jungle ferns. Yummy! 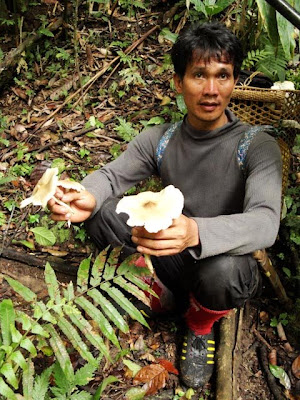 Speaking of shrooms, we saw some totally amazing ones in the mountains. Below is a picture of these little guys, taken in the dead of night, but illuminated with a small flashlight. 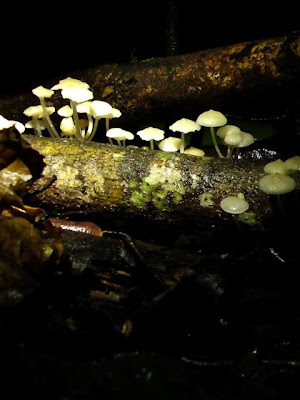 Turn the flashlight off, and the jungle was pitch black...well, except for the eerie green glow coming from the mushrooms. They're bio-luminescent! So sweet! There's several different types of fungi and mushrooms out there that glow at night. Actually, they were pretty bright to our eyes, but it's really difficult to take a time exposure and capture something like this with a point and shoot. This is the best I could do. 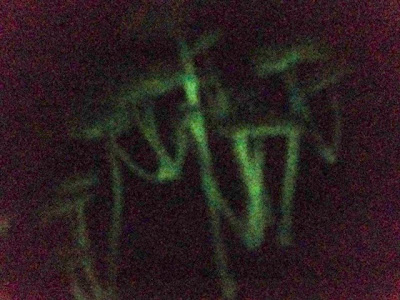 We also encountered tons of insects and creepy crawlies! There's no way I could show them all to you. In fact, I didn't even take pictures of all of them. However, here's a few. This one was about three inches long and moved very slowly. When we tried to get it to speed up it simply curled up in a ball and rolled off the log. It was bizarre! 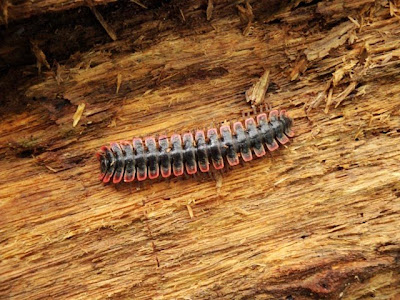 Some type of spider I almost swallowed on the trail. It's not always beneficial being the tallest guy in the group. 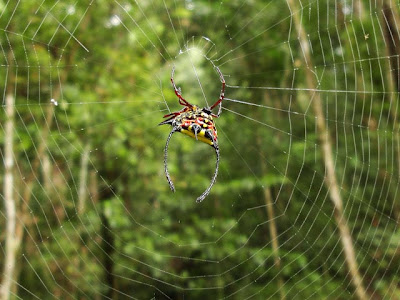 This was a gorgeous spider we found! The guides said that it's very rare--they almost never see these. While I was trying to take a picture of it, a wasp flew into the web and the spider immediately attacked it. However, a second later the wasp actually broke free, and actually grabbed the spider and flew away with it. Crazy! Bye bye pretty spider. 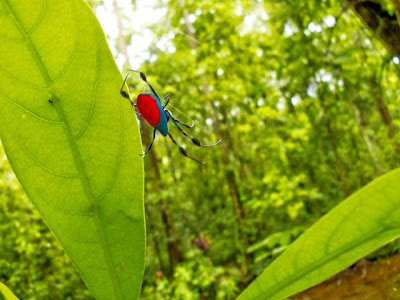 Two days later, as our first pig meat was starting to run out, we shot two more...with one shot! The guide waited till they lined up and then fired once, killing two small pigs almost instantly. Since shotgun shells are very expensive here, that was a brilliant move. We ate those pigs during the rest of our hike. 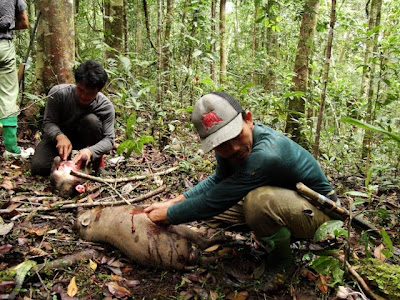 There were no shortage of HUGE trees in the mountainous region. Some of these trees towered hundreds of feet above the jungle floor, and sported trunks and root systems that were absolutely immense!!! In the picture below, the perspective is skewed, but I'm probably about 15 or 20 feet up in the mess of roots. And I'm not even at the top of the root mess. 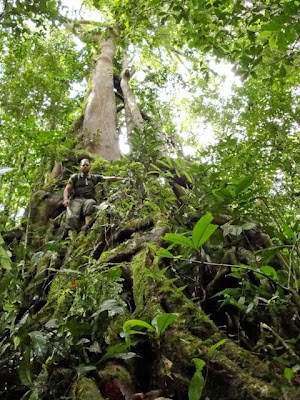 Paul is "Standing in the Gap" here, at the base of a giant! One of our guides and good friends from the village of Long Alango, works for WWF (No, not the World Wrestling Federation, but the World Wildlife Fund. A big difference!). I asked him about the age of some of these trees and he said that they've dated some of these giants (not specifically these very trees, but others like them) to over a thousand years old! 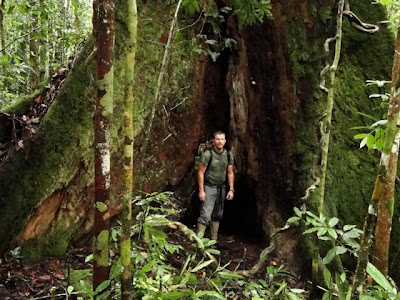 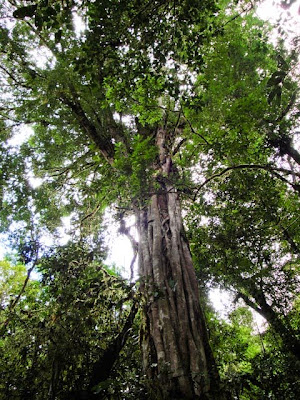 There was a small cave under the bank of this beautiful jungle stream. Of course, I had to climb inside. It was not inhabited at the time by any large animals. However, we found numerous trees that had large, comfy, holes in, with very active and recent signs of bear. This area is home to the rare Honey Bear (or Sun Bear) that is native only to this part of Borneo. 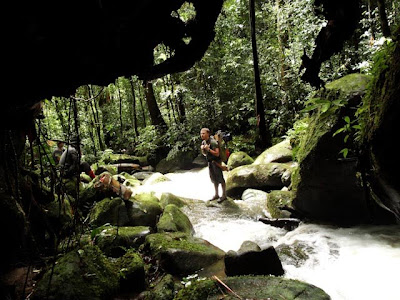 We paused at the creek for a group shot. From left to right: Andris, Paul, Dan, Daud, Me. Our three guides were amazing experts in the jungle--masters at survival in a very harsh environment. Paul and I always appreciate the many hours that a trek like this provides to get to hang out with guys like this. Usually, flight schedules are pretty intense and often don't allow much time to just hang out with folks interior. We always come away from a trip like this with not only a much deeper appreciation for the critical need that MAF meets for the folks interior, but also deeper friendships and camaraderie with those that we serve. 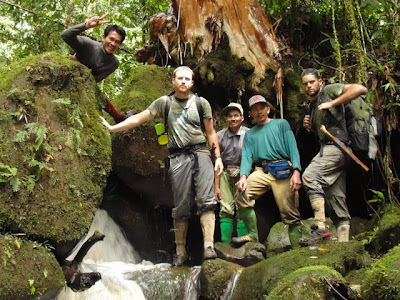 Check back in another couple days and I'll have some more cool stuff posted from our trek. 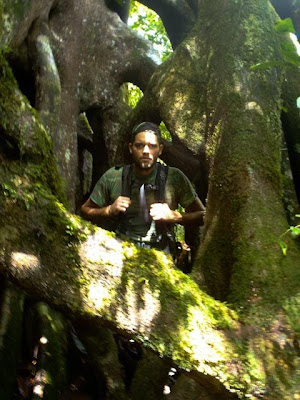 I wish you could bring home some of the wild mushrooms for me, hehe. Great story, especially the pig shooting and the trees.

Awesome! Wild about the glowing mushrooms. God bless y'all!

Hey Forney! Would have loved to been along for the adventure. No crowds, no traffic jams, no pollution and all those other unpleasant things the busy cities offer. Look forward to the rest of the story!

Praying for you all - Lew

Are your pictures georeferenced by any chance? Meaning is there a gps in your camera that includes lat / long in the pic file? I'd sure like to follow your pics on Google Maps.

No, my pics are not georeferenced, though the area we hiked in is indeed visible on Google Earth. Much of the rest of Northeast Kalimantan is actually under thick cloud cover and not viewable.

If you ever had time to post a public google map of your locations, we'd appreciate it. Thanks for getting back with me! Jason