Sweet Earlobes and Other News!

Yesterday I took my good camera along to grab some shots for an upcoming Facebook thing that MAF is going to do in a few weeks (I'll let you know when that happens.) Well, when I landed in Data Dian, I just had to take a picture of these two elderly ladies with the sweet earlobes!!! This used to be the norm, and was considered beautiful. Although today, the younger folks don't practice this anymore, we were at a wedding last year in Tarakan and noticed that the mother and mother-in-law were sporting some pretty sweet, realistic-looking silicone earlobes for the occasion. Who knew there was such a thing? 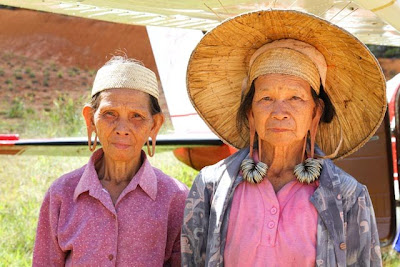 In addition to flying a small group of Indonesian Christian doctors to Long Alango yesterday for a mission/medical trip (our Chief of Maintenance, Tim, went along with that group to help in various ways), I also picked up an emergency medevac in Long Pujungan nearby and took the lady straight back to Tarakan. Then I flew back out and completed the rest of the schedule. 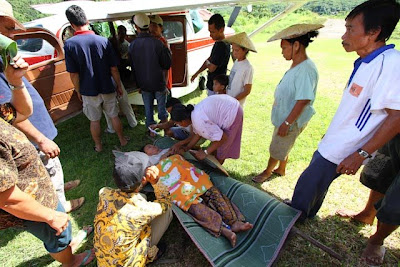 I've recently been working with Tripp Flythe, our newest pilot to the program, to get him up to speed and ready to fly solo in the Krayan region of Northeast Kalimantan. It's been a pleasure to fly with Tripp, and fun to experience all of this again through the fresh perspectives and excitement of someone who is just getting here. O.k. o.k. Don't give me a hard time about the Fu Man Chu facial hair thing that I have going on in the picture. As is the tradition after one of my jungle trips, I shaved off my beard in stages, much to the delight of my children and the horror of my wife. Each new "look" only lasted one day, and it just so happened that the day we snapped a picture while doing an airstrip checkout in Pa Upan, happened to be the day where I was sporting the Fu Man Chu. I'm back to "normal" already, so nothing to worry about. 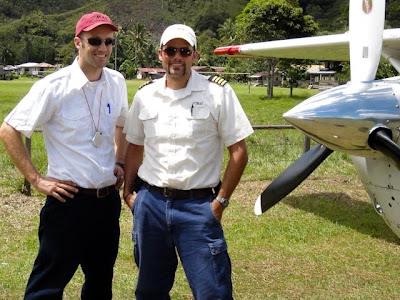 Joy was home-schooling the kids this year because much of our year was spent traveling and/or in the U.S. However, the other kids on the program had a school teacher this year. Our kids were able to participate in various classes at the school, and last week they had the end-of-year school program. It was a real delight to watch our children perform various skits, songs, poems etc. They all did very well, and yes, I did get some HD video for the grandparents to watch some day. Here, Hannah is on the left and Britton on the right, with their friends Grace and Carter in the middle (the older kids on the program.) 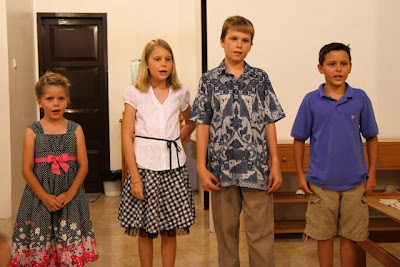 These are the younger kids. Hudson is on the left, with his friends, Zoe, Faith, Seth and Luke. There are MANY more kids that are not in school yet. We have a ton of little kids on our program...apparently there's something in the water over here b/c there are babies and toddlers everywhere! By the way, our school teacher had to return to the U.S., so next year all the moms will be home-schooling. And now for some critters. This is a picture of our Asian Giant Wood Spider that moved into our back yard a few weeks ago. They're very BIG spiders! This is a female, because the males are much, much smaller, and not as colorful. Although they are not the largest spiders in the world (they can get up to 8 inches from leg tip to leg tip), they are known to make the strongest webs of any spider. It's said that their nets can catch small birds. Well, we've enjoyed watching this one catch a lot of big bugs, but so far no birds...or kids have gotten caught and eaten. 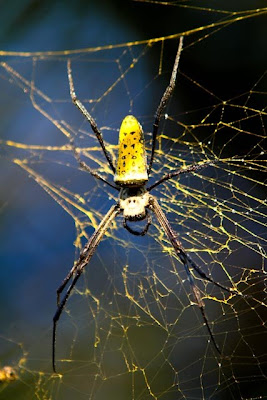 Two weeks ago we had a cute little bat land and rest up for the day under our banana tree above the sandbox. It stayed there all day until early evening, when it flew away presumably to find some food. Isn't he (or she) a cutie? 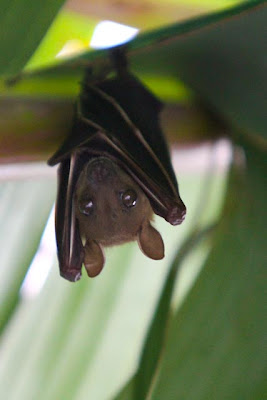 A few days ago Tripp and I landed in Long Bawan and opened the pod to discover a Pangolin (type of Anteater) that had gotten loose and was not very happy! I've seen one or two of these dead over the past couple of years, but never a live one. Apparently they are worth quite a bit of money because of the "medicinal" value to the Chinese. Poor little fellow! 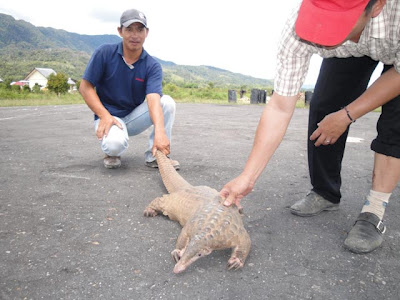 Once again great snapshots of your life in Borneo! Looking forward to the MAF FB surprise.

Hey Forney! Great shots of the interior and the kiddos growing up fast! Good looking Anteater. Sad it was not going to be around much longer.

Praying for you all - Lew

I agree at the baby part. Sometimes I feel that 2010 is going to have baby boom in Tarakan. Many of my relatives and neighbors are having babies this year.