The past two weeks (and still counting) have been kinda rough on our family.  We've had a stubborn stomach bug that just seems to keep going around through our kids over and over again.  It's still hanging around.  But on Tuesday night, just as we were ready to collapse into bed, Tyler took it to the next level.  He swallowed a coin.  First it got stuck in his lower throat, then as we were calling a doctor, it slid painfully down into his stomach.  It was 8:00pm.  Now what? 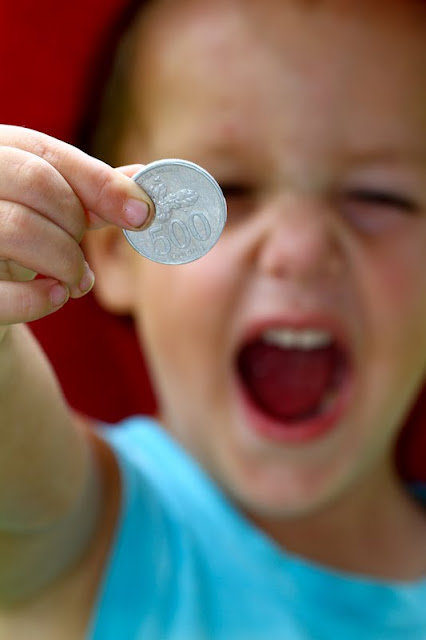 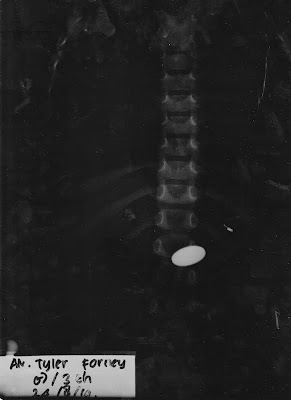 After talking to the doctor, Joy began the long process of getting a "professional opinion."  First she took him to the doctor's office, which is not located at the hospital.  The doctor had to give her a note to take to the hospital for an x-ray.  After getting to the hospital she had to wait for quite a while because the person that takes the x-rays was at the police station.  Never did figure out why.  Anyway, she eventually did get the x-ray. (When you get something like an x-ray here, you pay cash, and then they just hand it to you to do with it as you see fit.  It's sort of like buying something from the store in the U.S.  Now it's yours to take home.)  Then she took it back to the doctors office.  He took one look and said, "I hoped it would be smaller.  It looked like a 500 Rupiah piece, which is a little bigger than a quarter.  (Clearly visible in the copy of the x-ray at left.)  Anyway, for the next 48 hours Joy "panned for gold," as she so creatively put it.  I'll spare you the details, but suffice it to say, there's no way she could have missed something like a coin.  And yet, 48 hours later, no sign of it.  We were praying like crazy that it would come out, because the alternatives were not exciting.  If it got lodged in the intestines, or even worse, perforated the intestines, then we'd be looking at surgery--not an exciting prospect here in Tarakan.  Our Program manager began to look into the Medivac options and we were thinking of starting the paperwork process on Friday to leave for Singapore.  But we kept praying. 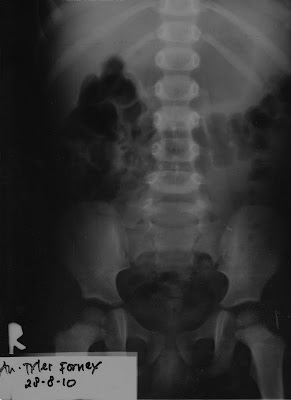 Joy and Tyler went back for another x-ray on Thursday evening. This time, we all (including the doctor), expected to see it somewhere down low, as it was "working it's way through" his system.  But it was a bit worrisome that it hadn't re-appeared after 48 hours.

When the x-ray was held up to the light, everyone squinted to find the coin.  It was gone!  You don't need to squint to see metal on an x-ray--it shines brightly!  The obvious explanation was that the "gold miner" must have missed it.  But trust me, I saw how that process was handled...it was a tight gold-mining operation, without room for error!  And Tyler does not make trips to the bathroom alone, especially under these conditions.  He was afraid he was going to die (that's another story), and he was all to excited to find the coin too.  So where did it go?

We waited another 24 hours and took another x-ray just to be sure.  No sign of the coin!  Of course, us technical, logical-minded aviation guys immediately began thinking through the scientific reasons why this might have happened.  Those coins feel like aluminum.  Is it possible the stomach acid totally dissolved the coin?  Maybe, but do you really think it could have done that in just 48 hours?  And the doctor didn't seem to think that made sense.  Why are we so afraid to give God credit for working miracles in today's day and age?  Couldn't the One that made Tyler, simply have answered our prayers?  We'd like to think so!  Now could you join us in praying that we get over the stomach bug?  It's wearing us down slowly...and right now at least four of us have it.  Let's ask for another miracle!

Here's Tyler, back to his normal mischievous self, earlier this afternoon.  In his hands are his weapons--in this case a wooden sword we made, a stick, and a plastic gun.  I don't know why, but he just absolutely has to have a "weapon" of some kind--usually two or three at a time, in his hands, all the time.  For Hudson it's cars, trucks and planes.  For Britton, it's animals.  But for Tyler, it's weapons.  He like to "defend his brothers and sisters" from anything and everything.  I guess he got a heavy dose of the God-give desire as a boy to protect, provide and defend.  He definitely thrives on that! 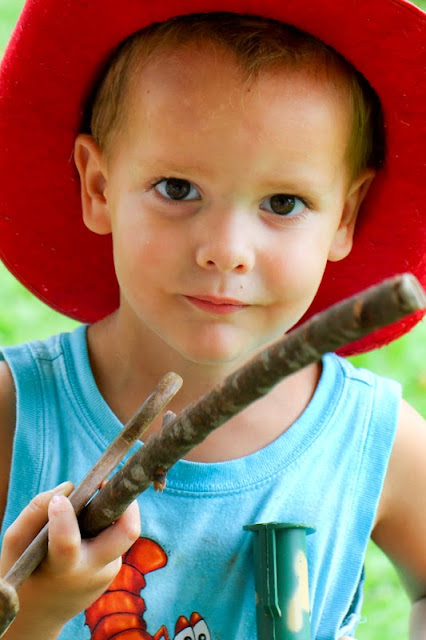 While Joy and Tyler were getting the second x-ray, Britton and Tanner and I were hanging out in the front yard.  (The other kids were at their friends house).  I happened to be messing with my macro lens that Alan and Theda brought over, so I snapped a few shots of the boys.  I told Joy to pick one of Tanner, but she refused to narrow it down beyond these three.  I guess that'll make the grandparents happy. :)  These definitely capture Tanner's spirit.  He's a very easy-going, caring little guy...loves hanging out with his dad and working on projects around the house. 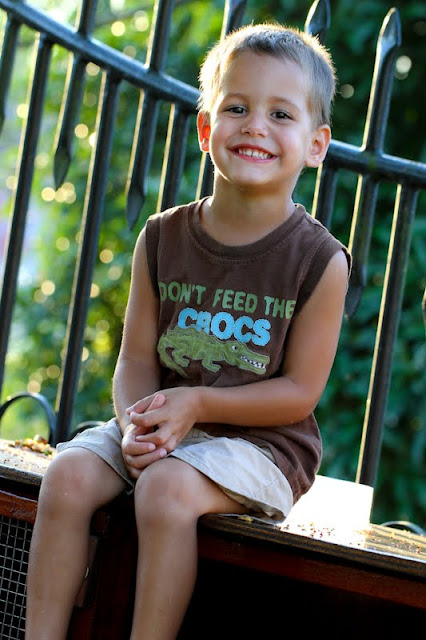 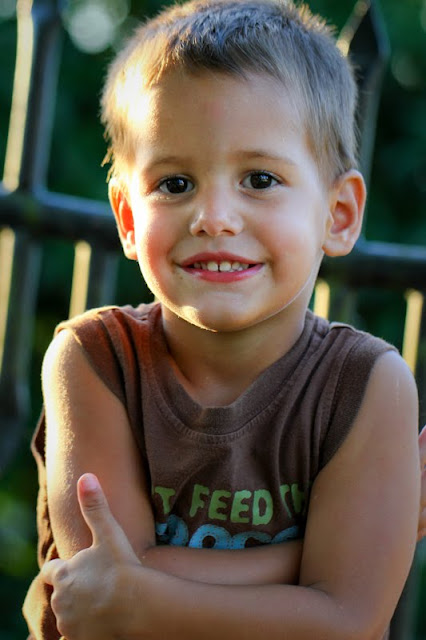 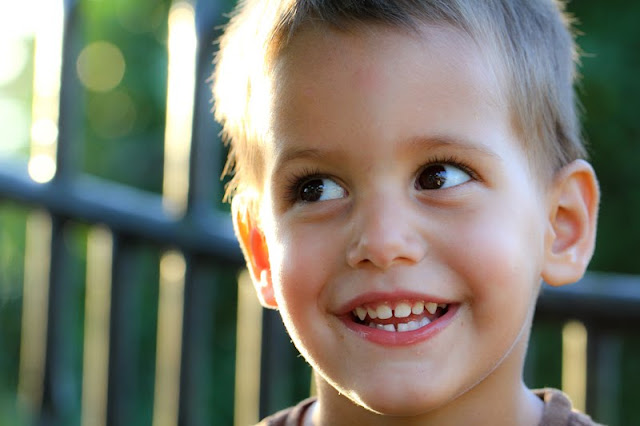 And here's Britton.  He's turning into quite the responsible, handsome young man.  His passion is animals, especially reptiles.  He takes good care of his reticulated python and four turtles, as well as various other "guests" that come and go temporarily.  He also helps with the other pets and with his younger siblings, which are probably much more work and less fun than his reptiles. :) 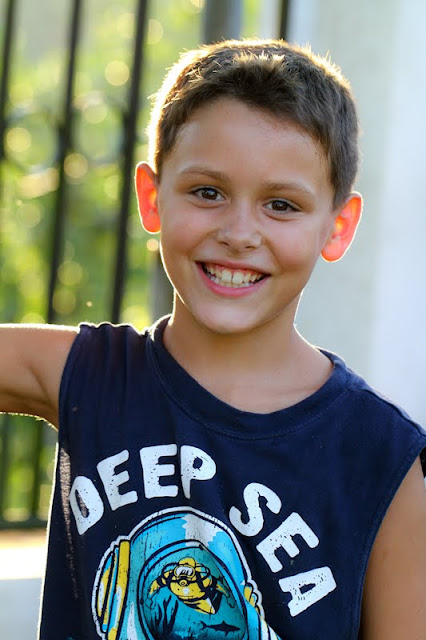 Today has been an overcast and drizzly Saturday.  We enjoy days like this once in a while.  It's a nice break from the hot and humid sunny days.  Anyway, I went out back for a few minutes and took a few shots of some of Joy's tropical flowers.  I like taking time to enjoy the simple beauty of God's creation--weather on the scale of an expansive rainbow spreading across the Borneo jungle as viewed from my "office window", or the simple "macro" beauty that's all around us.  Isn't God amazing? 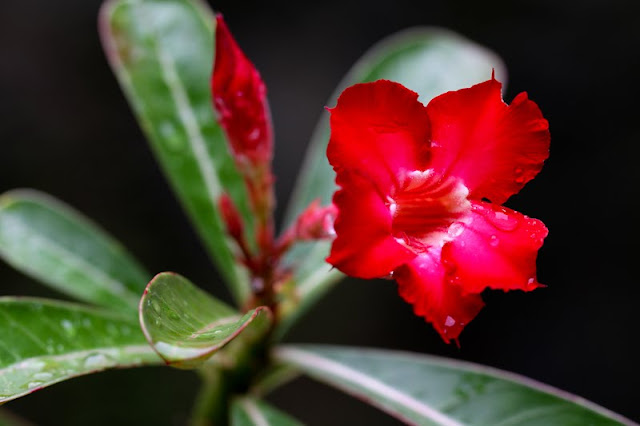 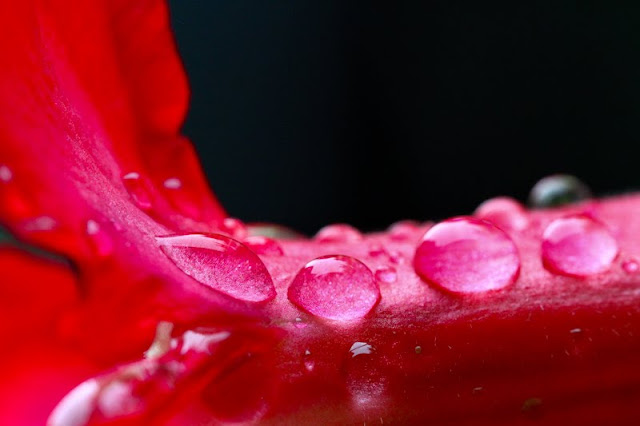 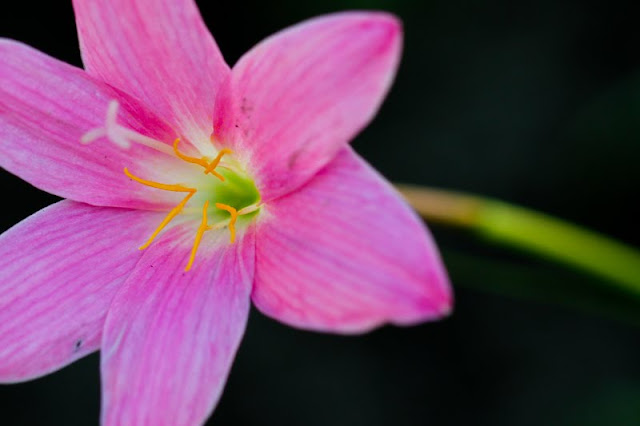 Praise God that Joy no longer needs to gold mine! I had a friend in high school that swallowed a nail (don't ask me why or how) and the same thing happened. Even after meticulous panning, nothing turned up. Another X-ray confirmed that everything was normal. We'll be praying you get rid of the other intestinal stuff...no fun!

What an awesome post! I love getting a glympe into childrens personalities! All 4 of mine are so different....praise God for that! My almost 7 year old boy carries a weapon around at all times as well! Legos become guns and this cute little carrot bat that I bought him at easter, has lost it's ball, and it's now a light-saber! He's very protective by nature as well.


I praise God for removing that coin! What a wonderful and mighty God we serve. Our son swallowed a penny once, and my nerves were shot for days. We never found it either, but I wasn't as meticulous as I'm sure Joy was! I do pray that the stomach bug will pack up it's bags and leave your house soon!

The photography is amazing. One of the elders, when veiwing your blog recently, commented that he may have to cancel his National Geographic subscription because your photos are as beautiful and compelling as their work.

Thanks for telling "His story" so well as you take us into the jungle with your ministry, and let us see and feel how the Lord is building your precious family.

Oh the Sovereignty of God!

I believe in miracles!!!!

I love miracles! God is so much bigger, so much more active and alive as everyone likes to admit. Oh, how I wish they would admit it. Cuz He deserves more credit, hey? Thanks for the beautiful story and pics!

Hello, my name is Donna and we are missionaries in the Dominican Republic. I have been following you for a while after a friend sent me your email. Anyways, I will be praying for you and your fight with sickness. I have 4 kids and we go through the same thing. We have found something that seem s to help (when we take it), its called MMS, short for miracle mineral supplement. You may not be able to get it there, we are blessed to have a distributer here, but you can check it out online if you are interested. God Bless!

My prayers as well- stomach bugs are no fun no way :( have you (the grownups) tried using vitamin C? I take 1 grtam in the morning if I feel a bug, and if it isn't gone by evening I take another gram. so far it hasn't let me down. but that is my opinion :)

I agree with you for Healing. By His stripes you are Healed. (Is. 53:3-5, 2Pet. 2:24) We command this sickness to go and perfect health to return,in Jesus' name! Your will be done in their lives, Your Kingdom come in Tarakan family in Jesus' name.

Loved your post and your pics. The Pics really add so much to the posts.