Last week I started working with Tripp Flythe to get him checked out to fly in the Apo Kayan region of Northeast Kalimantan.  After we landed in Data Dian we heard a loud processional working it's way up the airstrip from the river below.  The Bupati and his wife were being carried in a beautifully decorated canoe, high up on the shoulders of a group of young men, as traditional Dayak music was belted out from a hand phone wired into a battery-operated bull horn.  It was quite the festive atmosphere! 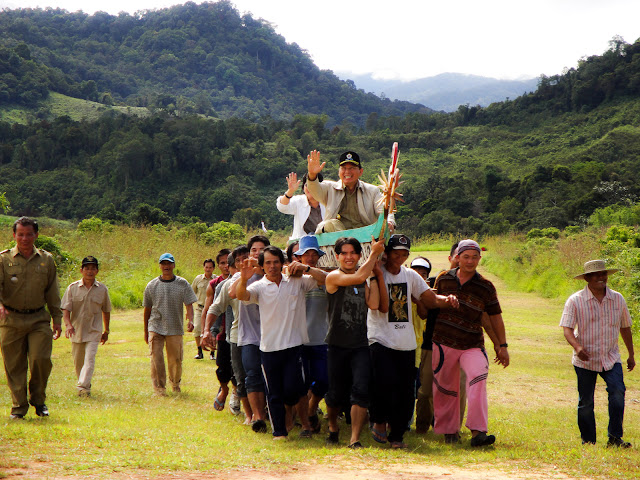 Indonesian states (like East Kalimantan--the one we live in), are similar to U.S. states in that each one has an elected governor and vice governor.  However, just below that level, they further divide the state into regions, or areas that are under the authority of a Bupati, also an elected official.  It's a fairly high-level position that can have a lot of influence, good or bad, on the people in that region.  The current Bupati is coming up to the end of his term limits and will therefore need to retire from that position.  He has been a good leader and is highly respected and appreciated by the people whom he leads and serves.
He also has a very good relationship with MAF, and uses us frequently when needing to travel interior.

Recently he asked if we could take him around on a "safari natal" (literally, "Christmas Safari") to visit many of the villages he has served one last time as their Bupati.  We were glad to help.  In most cases, there is no other way that he could have travelled to these villages, other than with MAF (unless you consider walking and canoeing for weeks or months on end a viable option.)  So while Tripp and I were walking/inspecting the airstrip and then flying practice takeoff and landings, Dave Holsten flew the Bupati and his entourage in two Kodiak loads from Data Dian over to Long Nawang.  The Bupati and the people in these and many other villages were grateful for our help with that.  Below is a picture of the Cessna 206 parked on the left at the top of the Data Dian airstrip, with the Kodiak parked to the right. 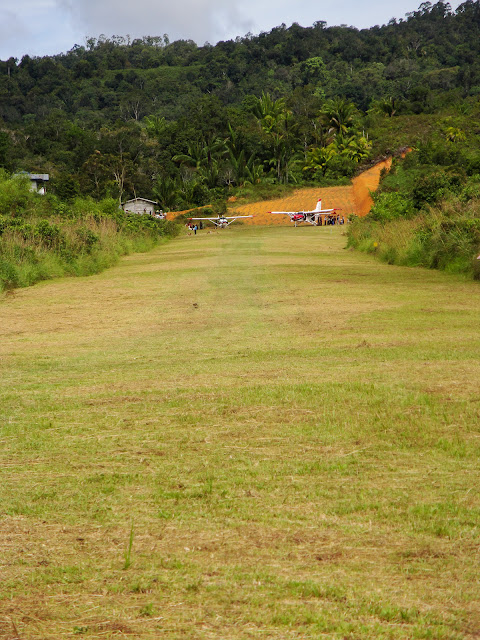 This past week was a very busy week of flying, as it usually is right before Christmas.  In addition to many "normal flights" (whatever that is), I also flew quite a few loads of supplies and people to various interior villages for Christmas church services, several medevac flights and unfortunately the body of a 20 year old young lady back to the village of Data Dian.  On Wednesday there was a serious motorcycle accident in Malinau (a one-hour flight from Data Dian), where the young gal was in school.  She was killed, but an 18 year old young man (a family member) on the same bike was seriously injured and MAF took him to Tarakan where he's still being treated at the hospital.  The next day, Thursday, I flew the body of the young woman back to Data Dian so her grieving friends and family could have some closure.  Though obviously very sad and devastated by her sudden home-going, they have a faith and hope that they will one day see her again because of their faith in Jesus!

On the return flight I brought the parents of the injured young man back out of the village and all the way to Tarakan, so they could be with their son in the hospital.  MAF is the only operator that can land an airplane in Data Dian.  Without MAF, it would take about two months to travel from Data Dian to Tarakan by land!  They were extremely grateful for our help!

Last Friday the MAF kids put on a Christmas program for our team.  They did a great job.  Here they are pictured after the little show. 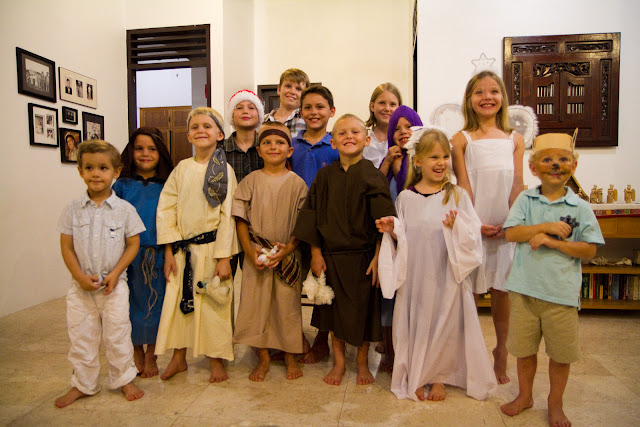 Hannah played Mary and Hudson played Joseph.  Britton was a narrator.  At one point it suddenly dawned on me that I had become that weird dad that's always down in the front row, taking photos and video of his kids and embarrassing them at the same time.   When I was a kid I used to think, "I'll never do that."  But alas, here I am, a proud dad...and unable to help myself! :) 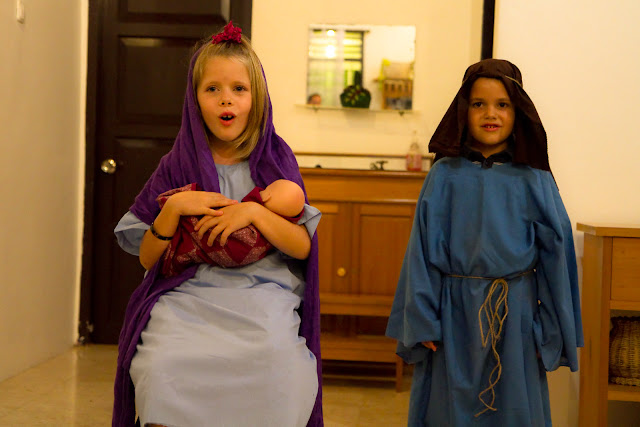 On December 23rd we hosted an open house for all of our Indonesian friends and neighbors.  As I mentioned a while back, it's the custom here for people to visit their Muslim friends in their homes for Idul Fitri, at the end of their holy month of Ramadan.  We went to many of our friends homes at that time, and when Christmas roles around they return the honor by coming to our home.  Of course, we also had many people from our church and from MAF as well. The people seem to come in waves, and many times they wanted pictures.  This was one such "wave" of people.

And here's another.  Chris and Sarah D. joined us in hosting our open house.  Chris flew here for about a year before returning to the U.S. to marry Sarah.  They recently returned to Tarakan, but live up a little road that's sort of hard to find, especially in the dark.  So we joined forces.  In the picture, Joy is in the center, Sarah on the left, and Chris...well, you can probably figure out which one he is.  I'm behind the camera. 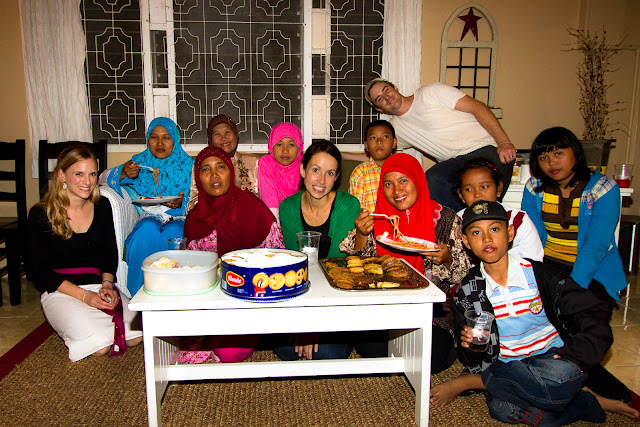 All said there were well over 75 people who came!  It was exciting and humbling to see how many friends we have here in Tarakan.  Other times when we've done this, Joy has served Indonesian food that we know everyone will like.  But some of her friends asked her to make something "American" this time.  So she made Spaghetti--lots of it!!!  I know, I know, that's not American, it's Italian.  But close enough.  We made it the way Americans make it, and they loved it! 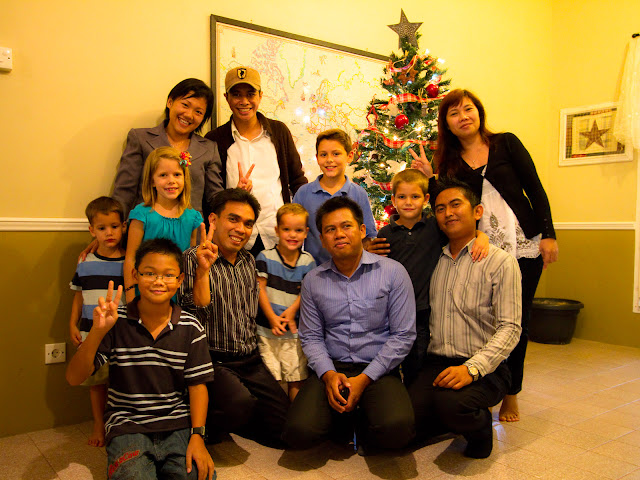 From our family to you and yours: we wish you a very blessed and merry Christmas!

Merry Christmas from Eastern Oregon! May God bless you as you serve Him in Indonesia.

Sweet! Your kids are awesome, and Joy is a trooper!

God bless you all!