Trekking With My Son -- The Pujungan Hulu Adventure: Part 1

For a few years now I've been promising my oldest son, Britton, that I'd take him on a big jungle adventure.  He's been desperately looking forward to it!  We originally planned to do it around his 12th birthday, which would have been in August, and the middle of "dry" season--always a good time to be hiking in the jungle.  But Joy and the kids took a rather sudden trip to the U.S. at that time.  Britton actually voted to stay behind in Indonesia, rather than going to the U.S., if it meant that he wouldn't be able to do the jungle adventure with me.  But of course, I wanted him to be able to do both, so we re-scheduled the jungle adventure for November. 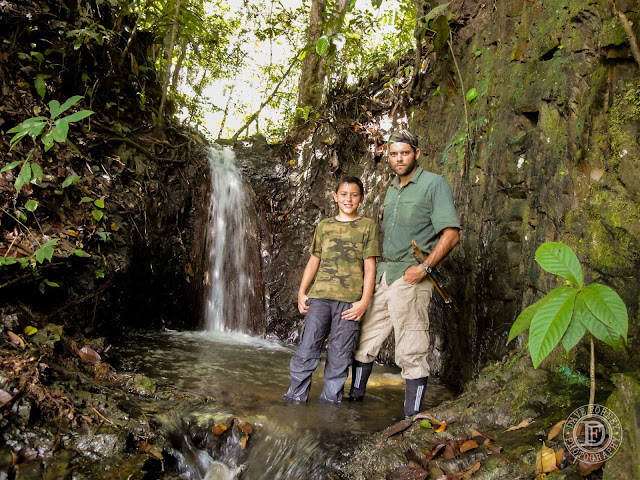 My plan was to take six days to trek around the upper Pujungan River system (Pujungan Hulu) near the remote and isolated, picturesque village of Long Jelet.  I was particularly interested in seeing a very unique area over which I've flown many times, which resembles a large extinct volcanic crater.  Here's a picture from 12,000 feet.  At the lower center of the photo, in the semi-circle shadow, if you look closely you can see a water fall.  That's the Bum River Waterfall, which drops several hundred feet off the sheer outer edge of the crater wall.  Inside the crater are numerous swampy ponds or lakes (visible in the picture as shiny brownish-white patches void of trees) which are very rare out here in this part of the deep Bornean jungle.  At times, flying over at lower altitudes, I've seen a lot of large animals standing in or at the edges of these ponds, and I was very intrigued.  The whole interior part of the crater looks from the air to be totally different, as far as the flora goes, than anywhere else in Northeast Kalimantan.  I've always been curious about it.  Furthermore, I've heard that there were old burial grounds in the inside cliff walls of the crater.  It all sounded very exciting and adventurous, the perfect place for a father and son to spend some great time together!  So that was our plan--to get there, and then to explore the area. 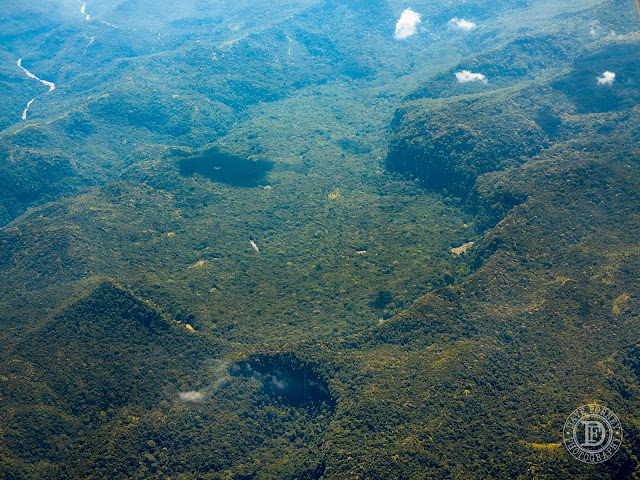 We started by flying an MAF 206 into the village of Long Pujungan, a one-hour flight from Tarakan (below).  It turns out that there'd been a ton of rain over the past few days, so we almost got stuck in Pujungan because of the high and dangerous water levels.  However, my guides and good friends, Pak Yu Taang, and Pak Lajau, who've I've done several treks with now, we're raring to go and willing to give it a try.  So we gassed up and started the typical 3-hour trip in the motorized canoes up the rain-swollen Pujungan river towards Long Jelet. 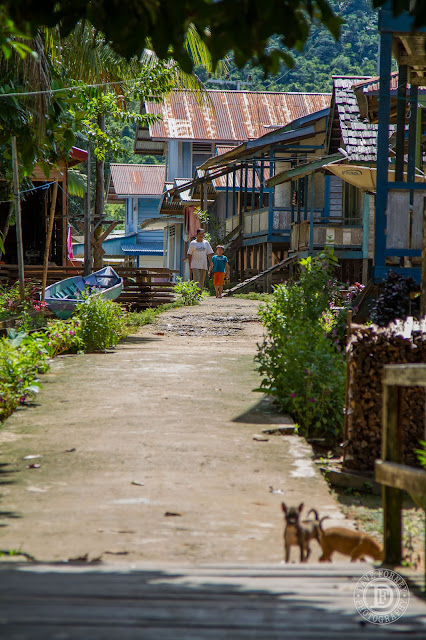 I did not have a water proof camera this time, so the only pictures I took from the boat were the ones that could be snagged in the not-too-common stretches of calm water that afforded enough time to get the point and shoot out of the baby pelican, and snap a shot or two, before quickly putting it back in just before getting drenched again.  So the picture below gives you a good idea of what maybe 10% of the trip looked like.  The rest of the time it much more resembled something you might find at a water park, or a specialized white-water rafting outfit--but in this case we were in a wooden, over sized canoe type boat, with no added flotation.  I always love the river parts of these treks! 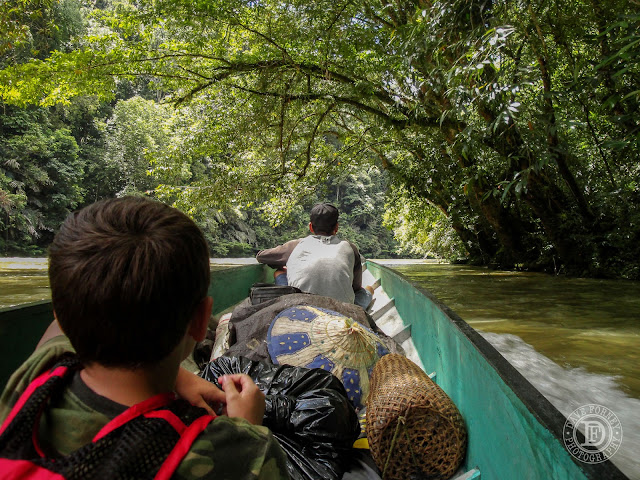 It's always very impressive and exciting to me, to see how well these guys navigate the rivers.  I wouldn't last 5 minutes on my own without capsizing the canoe--yet these guys do it day after day.  Of course, to be fair I guess they probably wouldn't be able to land an airplane in Long Pujungan to save their life, so it's all good.  I just kick back and enjoy the ride!   It's normal on this trip to have to get out three or four times to walk around the worst of the rapids.  But in this case we must have gotten out 15 times or so--and several times we had to pull the boat up through the worst areas because of the higher water.  It was slow, tough going! 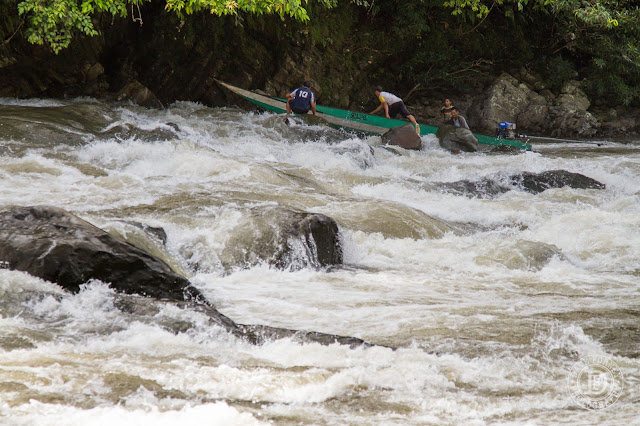 While walking around several of the bad areas, we stumbled across some baby waterfalls, cascading down the jungle slopes, and Britton was quick to jump in and cool off. 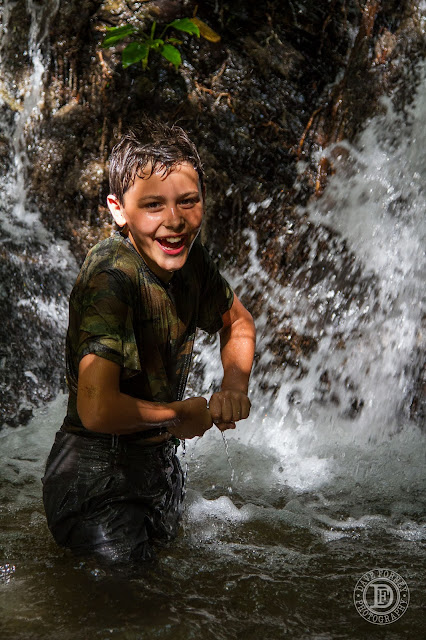 Late in the afternoon we pulled over and hiked the short distance to the Lower Bum River Waterfall.  This is the same small river that is pictured in the areal shot above, but this is close to the mouth of the river where it dumps into the Pujungan.   Even though it was a bright, hot, and sunny day, it was very cool in the waterfall area--a combination of the thick canopy cover and the constant moisture in the air.  Oh, and the wind that never stopped blowing from the falling water. 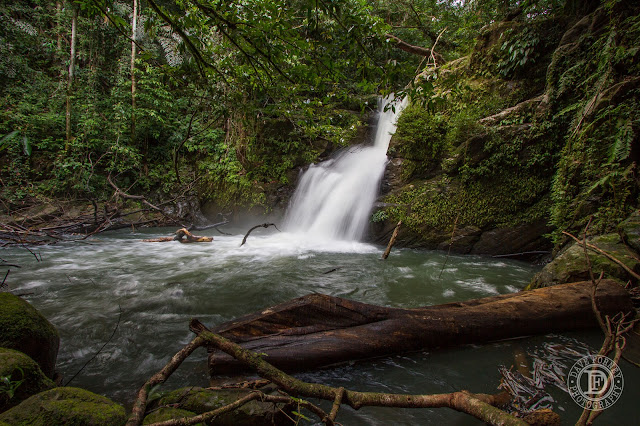 And again, Britton jumped right in.  This photo gives you an idea as to the size of the falls--not super big, but not tiny either.  The pool was actually quite deep--we didn't find the bottom.  The guides were super impressed by this time with Britton--both with his walking ability as he hiked around numerous rapids, sure-footed and confident, and also with his eagerness to fully experience all of the sights, sounds, and opportunities the jungle had to offer--like waterfalls.  Although they were very excited about this trek where I had promised to bring my oldest son along (we'd been talking about it for two years now, and they were really looking forward to it), I think they were just a bit nervous as to how he would actually get along in the jungle.  But I think those fears were quickly put to rest, and indeed he proved to be very capable indeed throughout the entire trip!  In fact, within a few days they were saying that they thought he was part Dayak (the ethnic group of the people in that area), a high compliment indeed! 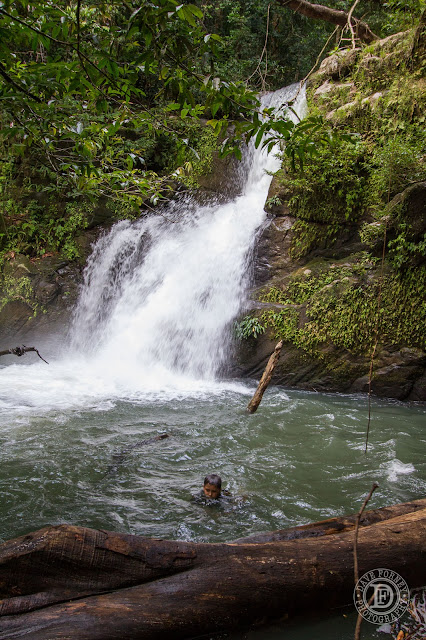 Well, late in the afternoon, at about 5:30, we finally made it to Long Jelet.  It took about two and a half times longer than normal to make the trip upriver because of the high water, but make it we did!  Here, Britton is standing on the bank just beside the village of Long Jelet, a hunting dog gazing into the distance in the foreground. 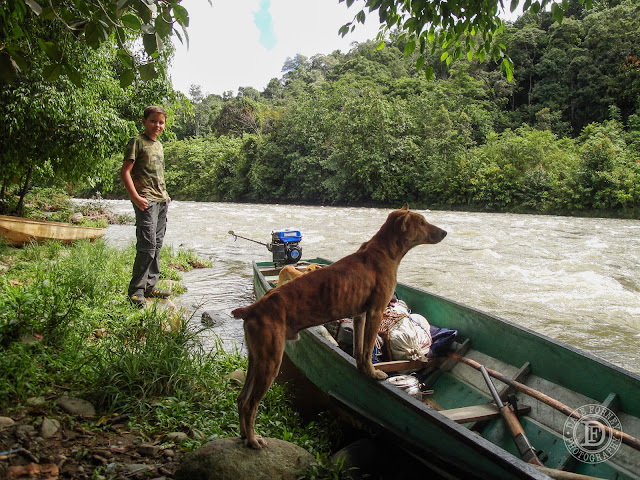 Our plan was to spend the night here and then leave early the next morning for five days in the jungle.  But as Britton quickly learned, jungle travel is not only difficult and dangerous, but extremely unpredictable.  And things often don't go as planned.  Check back soon for Part 2. 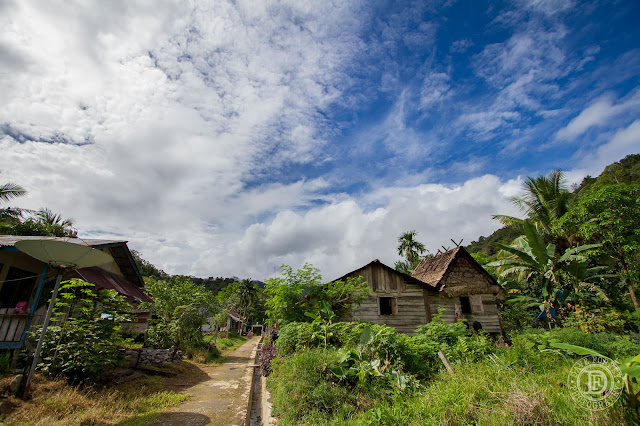