Trekking With My Son -- The Pujungan Hulu Adventure: Part 2

While in Long Jelet we stayed in Pak Lajau's house, pictured below.  I love the look of the houses in Long Jelet.  Many of them still use the traditional thatched roofing, whereas most houses in other villages have switched to tin roofs.  And I can personally attest to the fact that this thatched roofing does a good job of keeping out the rain, because oh man did it ever rain that night!!!  It rained and rained all night long, and the Pujungan river that was already high the day before, became even higher and more dangerous by the next morning.  In order to start our hike, we were planning to go another 30 minutes further up river by boat to the trail head.  But that was impossible do to the dangerously high water, so we were resigned to hang out in the village the rest of the day, waiting to see if the water level would go down. 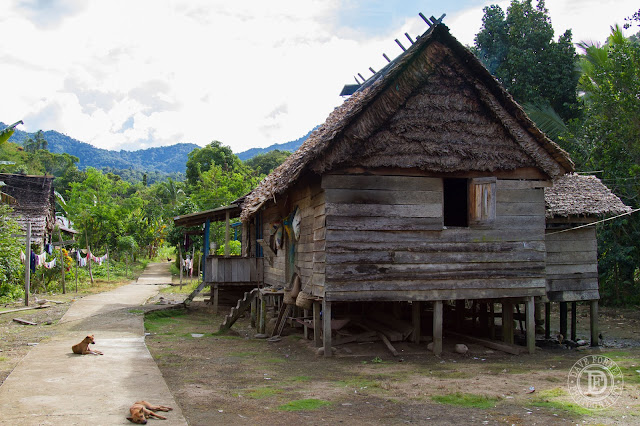 Pak Lajau and his family were extremely kind and generous!  Although they have very little in terms of material possessions, even by Indonesian standards, what they do have is freely offered to their guests.  All of it!  I've met his wife and several of his kids the two previous times I've passed through Long Jelet on hikes, but I've never stayed the night there, so it was great to spend some more time with them.  Here, we're drinking tea and coffee and stuffing ourselves with manggis, or what is known in the Western world as mangostene.  They had an endless supply of it, totally fresh right off the trees and perfectly ripe.  From what I've been told, it's considered a bit of a "fruit delicacy" in the U.S., and is very expensive if you can get it at all.  I had never eaten it before coming to Indonesia.  It apparently has many fantastic medicinal benefits.  But whether true or not, what I can tell you is that it tastes like something straight out of the garden of Eden!  Unbelievably sweet and flavorful--hard to describe! 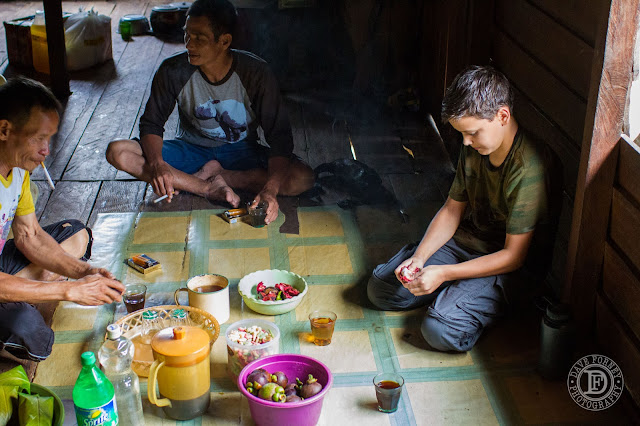 This is Pak Lajau's youngest, Carles.  He kept us entertained day and night--quite the little comedian, with a never-ending supply of energy.  He especially liked Britton. 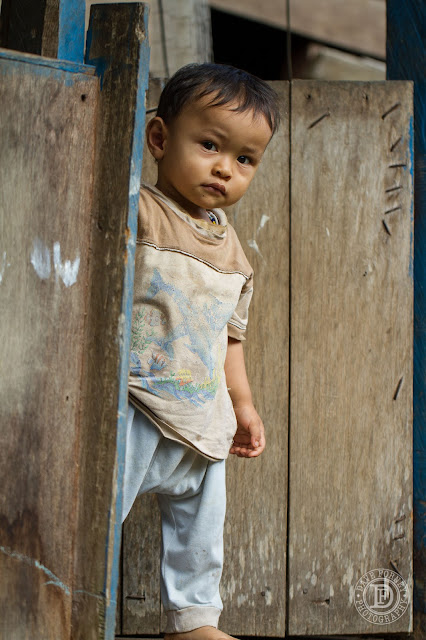 Well, since we were stuck in the village with all that penned up energy, Britton and I decided to walk around and explore some stuff locally.  We started by just walking around the village.  Most villages have a lot of dogs and chickens, but Long Jelet seemed to have an unusually high number of dogs.  Indeed, it seemed as if there were almost as many dogs as people!  The dogs are used in hunting pigs, but when not hunting they pretty much just hang out and roam around the village, staking out prime spots up on stairs and porches. 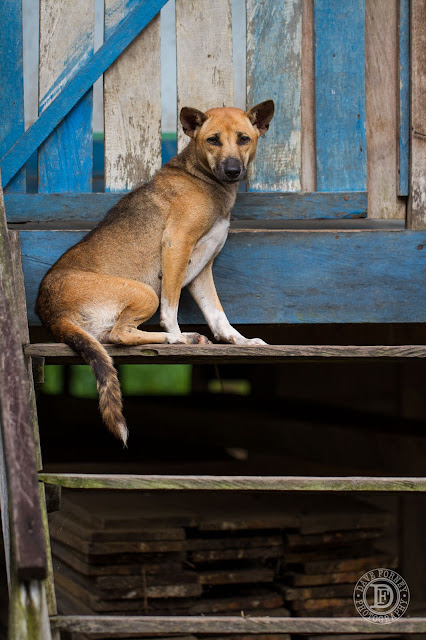 I've never seen dogs anywhere that can climb as well as hunting dogs in these parts.  I've seen these dogs go up things that even I would have a hard time climbing.  They seem to almost enjoy it! 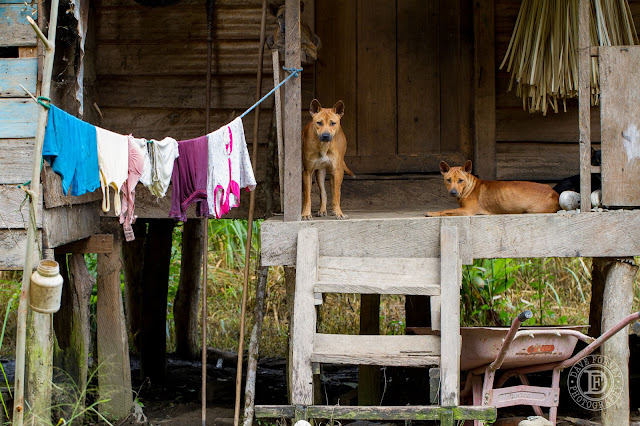 In fact, I think they could give any goat a run for his money when it comes to climbing.  It never ceases to amaze me, b/c it's not something I'm used to seeing.  About half the houses in Long Jelet used the more traditional "stairs" as pictured below.  It's basically just a log, leaned up agains the front door, with notches cut out for steps.  A small notch seems to provide the perfect perch for a hungry, village dog. 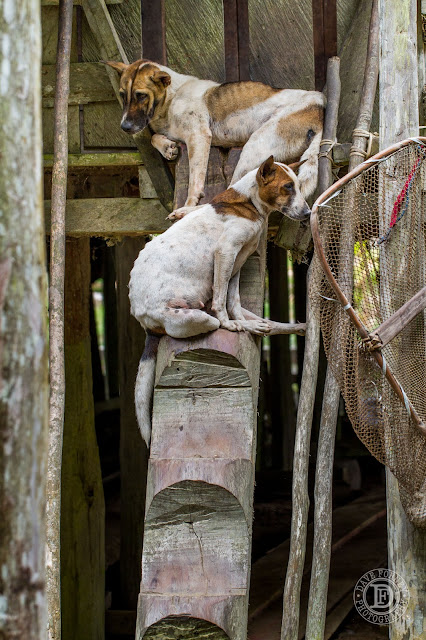 And here's one of the more "modern" and colorful houses in the village.  Oh, and if you look closely, there on the front stairs is a...oh, a dog!  I never would have guessed. :-) 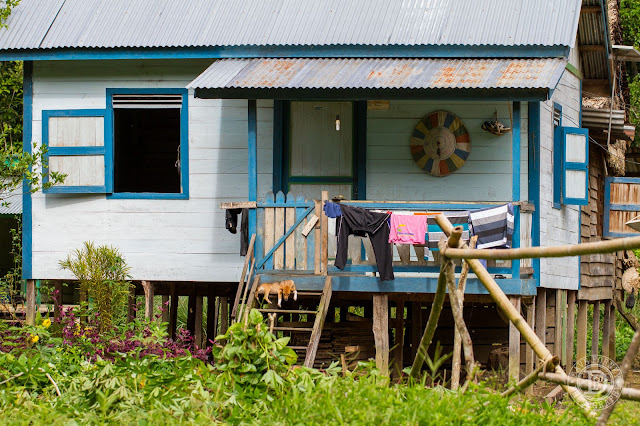 As we walked around the village we met lots of friendly people and saw signs everywhere of their subsistence-style living.  Most of what they eat is grown or taken directly from the land around them.  Here are some coffee beans that have just been picked and were drying in the sun on a woven mat.  Although much of the finer coffees you drink around the world actually originate from Indonesia, they do not come from this area.  Kalimantan is not known for coffee, and does not produce or export coffee  commercially at all.  All of that comes from Sumatra, Sulawesi, and some from Papua.  But there are a few people interior who grow and roast their own personal supply.  Talk about fresh! 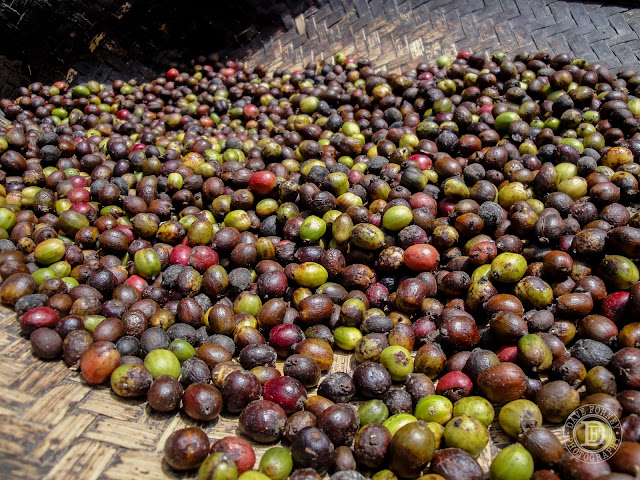 Rice is the staple of their diet.  They eat it every day, as a part of every meal.  It's prepared in a variety of ways.  Here, one of the ladies is pounding rice to make flour.  They do this day-to-day as the need arises.  Again, fresh! 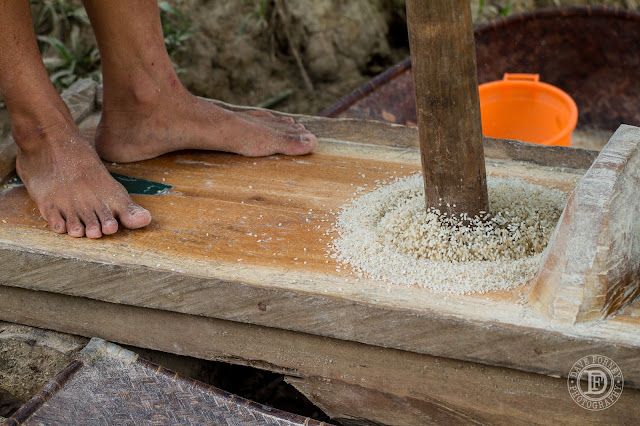 And surrounding the village is the new crop of rice--two kinds of rice actually.  Down low is the wet rice, growing in the paddies.  And on the hillsides is the "hill rice", which has a slightly different look and taste.  And you thought all rice was the same! 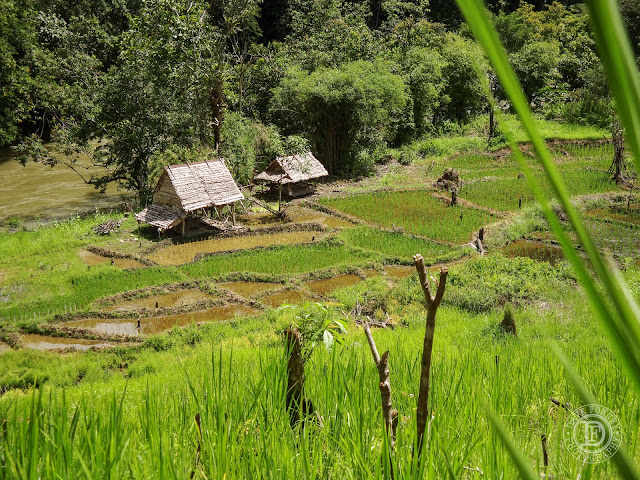 Many of the gardens and rice fields are located just across the river that flows in front of the village.  This is not the Pujungan river that we came up the day before, and were trying to go further up to start our hike.  This is a much smaller river that flows into the Pujungan just downstream from the village.  None-the-less, it can be a pain to cross this little river with canoes day after day, so the folks built a suspension bridge. 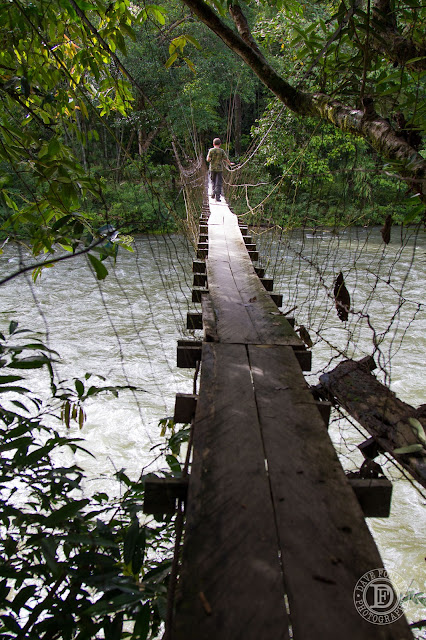 It hangs from a combination of cables and vines.  We crossed it many times that day, so we could hike the quarter mile through the gardens to the bank of the Pujungan river to check on the water level.  Unfortunately, despite the now-sunny skies, the water continued to rise all day, as the rugged mountains surrounding the area flushed the previous night's rain our way.  By late in the afternoon it was obvious that we would be spending another night in Long Jelet. 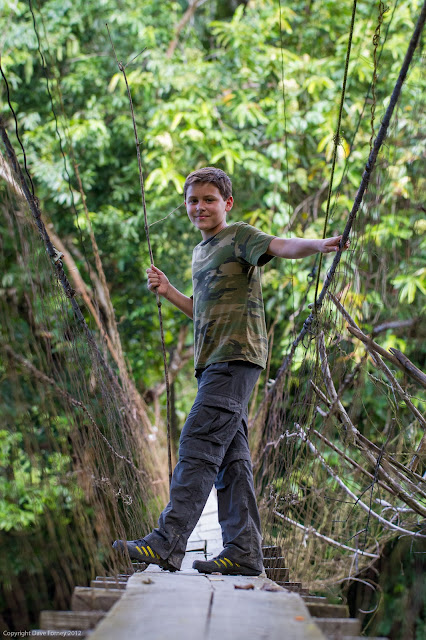 Here we are eating the evening meal with Pak Lajau's family.  The food was delicious!  There's no electricity in the village, so people tend to eat early and retire not long after dark.  But since they were entertaining guests, they fired up a little generator, to run some lights.  Soon, half the neighbors came over to hang out and visit--it's not every night that a couple of foreigners drop by!  We had a great time visiting late into the night. 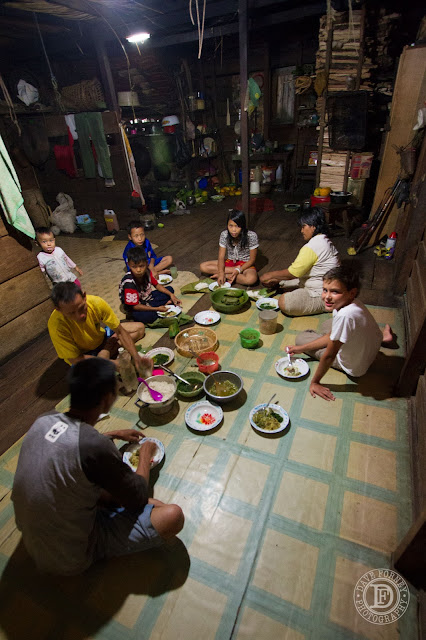 And of course, we hoped it wouldn't rain!  But as we drifted off to sleep, we heard the sound of distant thunder.  This is the reality of jungle travel interior--it's unpredictable at best, not to mention difficult and dangerous.  No wonder everyone appreciates MAF so much!  Check back soon to find out whether we got stranded again, or were finally able to begin our hike.
Posted by Dave at 2:32 AM

The photos and story are just wonderful. I am writing from Geneva, Switzerland where it is -4 degrees celsius outside, and your post took me away to the tropics for the time it took me to read through.

I have been in villages like this in Laos and Bhutan, and been stunned by hospitality (the families with nothing giving it all, as you say) - but I suddenly realised that the big difference is, I do that occasionally - you and your family go back repeatedly... That is so wonderful, for the people you visit and for you. Oh, you are giving your kids such a rich life.

Always wishing you and Joy and your family all the best,
Alison

Nice Article! Thanks for sharing with us. Jungle Cottage

What a wonderful work you are doing in Indonesia! Your pictures are absolutely beautiful! God bless you and your family :)

can I have permission to post photos of the dogs on my new site about native land races all over the world?

thanks you - Stephanie Little Wolf