Great news!  I've passed my Ugandan commercial pilot conversion exam, and so hopefully should have a Ugandan pilots license and be up and flying again within the next two weeks.  Woohoo!  Thanks for your prayers regarding this stuff.  It's been a long process...seems like I've been non-stop studying, and taking exams, and/or waiting for exams to be ready to take, and then waiting for results, ever since we got here back in late March.  So it's really nice to finally be done with that process!

Last week I rode along with another MAF pilot--partly so I would keep the flight stuff fresh in my mind, since I've been grounded for a while, and partly so I could take some photos of MAF in action.  I managed to get some great shots, so I'll begin sharing those next week.  First, I just wanted to finish up the Red Cliffs post, and thereby complete the posts I've done off and on since last October on our family camping trip in the National Parks of the Western U.S. 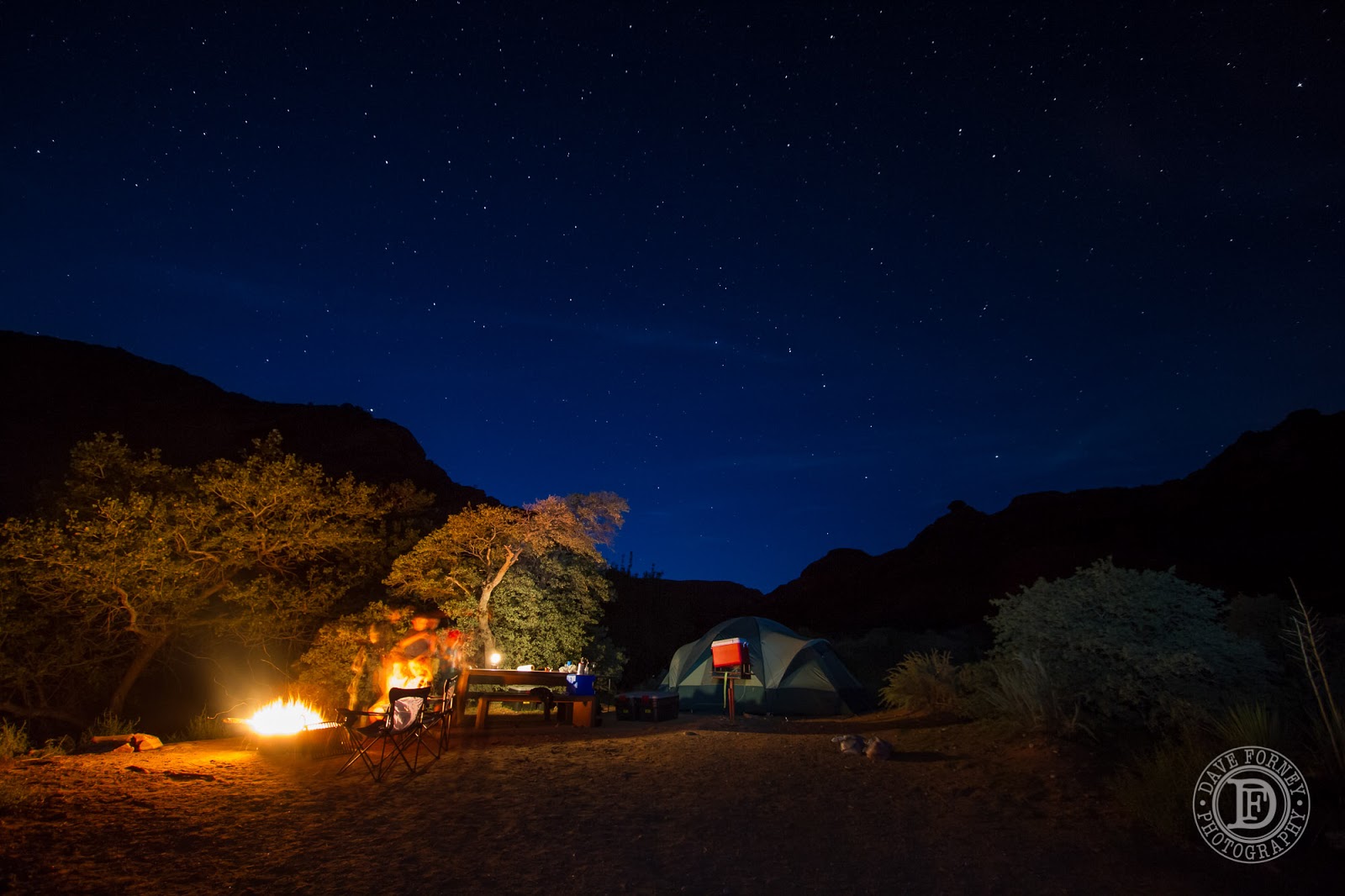 This final Red Cliffs post is centered around the evenings and mornings that we enjoyed so much.  Above, our campsite, with the dinner fire blazing and the stars beginning to come out.  Below, just outside our tent door, looking out over the desert at dusk. During our camping trip I was the one primarily responsible for food and cooking.  At home, it's Joy.  In the wilderness it's me.  We ate a bunch of fun stuff that wasn't really healthy for us, but sure tasted good.  Hey, we were tent camping and we didn't have a sink or oven or any of the conveniences that most American campers have in their RVs.  So we had to keep it simple.  Like mountain pies--below. 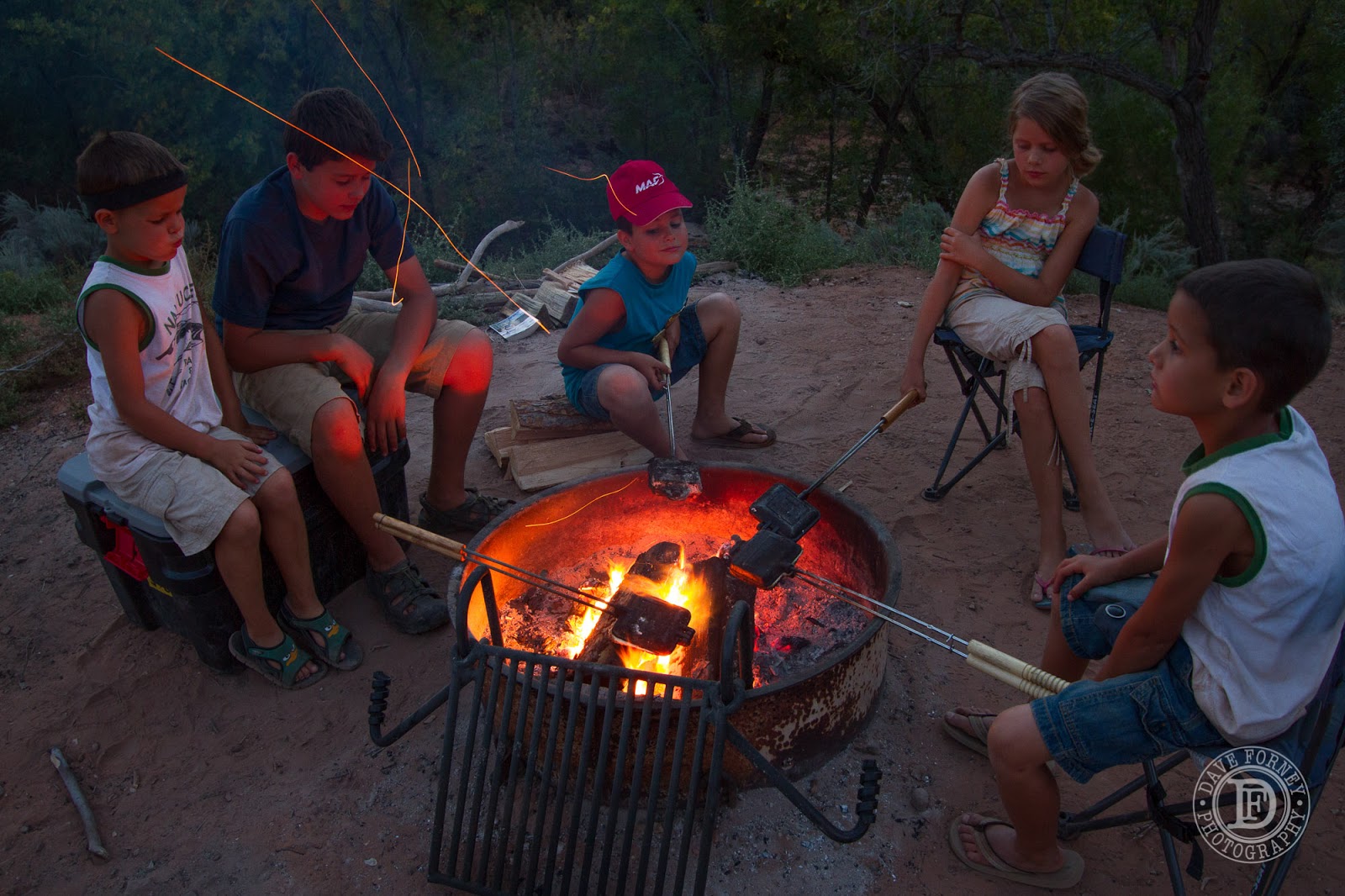 Despite the admittedly mundane-looking faces in the pictures above, the mountain pies were always a big hit.  There's a wide variety of pies that you can make over the fire.  Obviously this night we were having pizza pies, below, with pepperoni and black olives.  The kids got really good at cooking them just right.  Joy and I usually didn't have to make our own, as there were always plenty of little volunteers wanting to cook another one. :-) 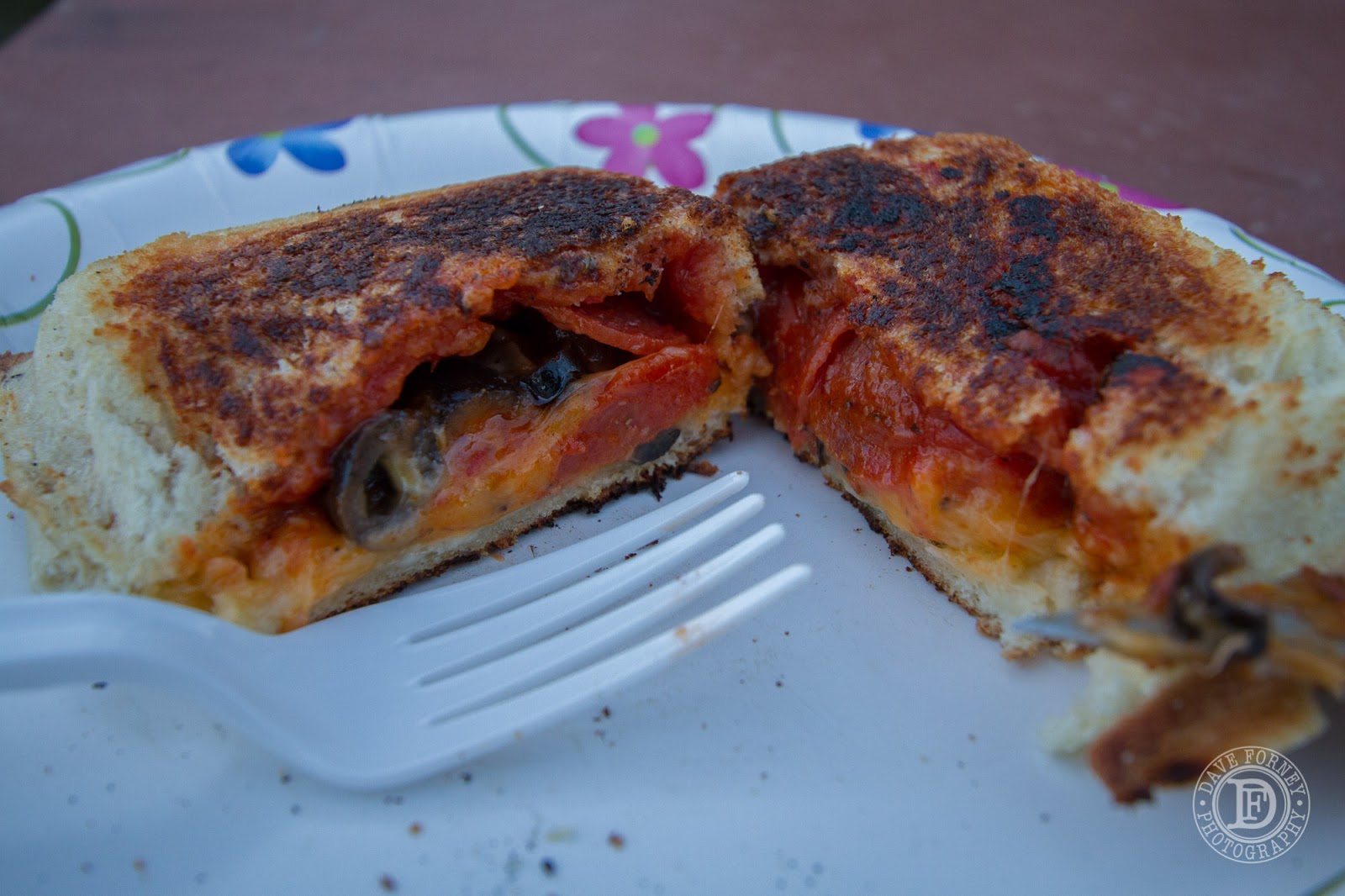 For dessert?  More pies--this time strawberry pies with whipped cream from a spray can.  Hey mom, it's not like I was going to make my own whipped cream out there in the middle of nowhere.  It was sure tasty! 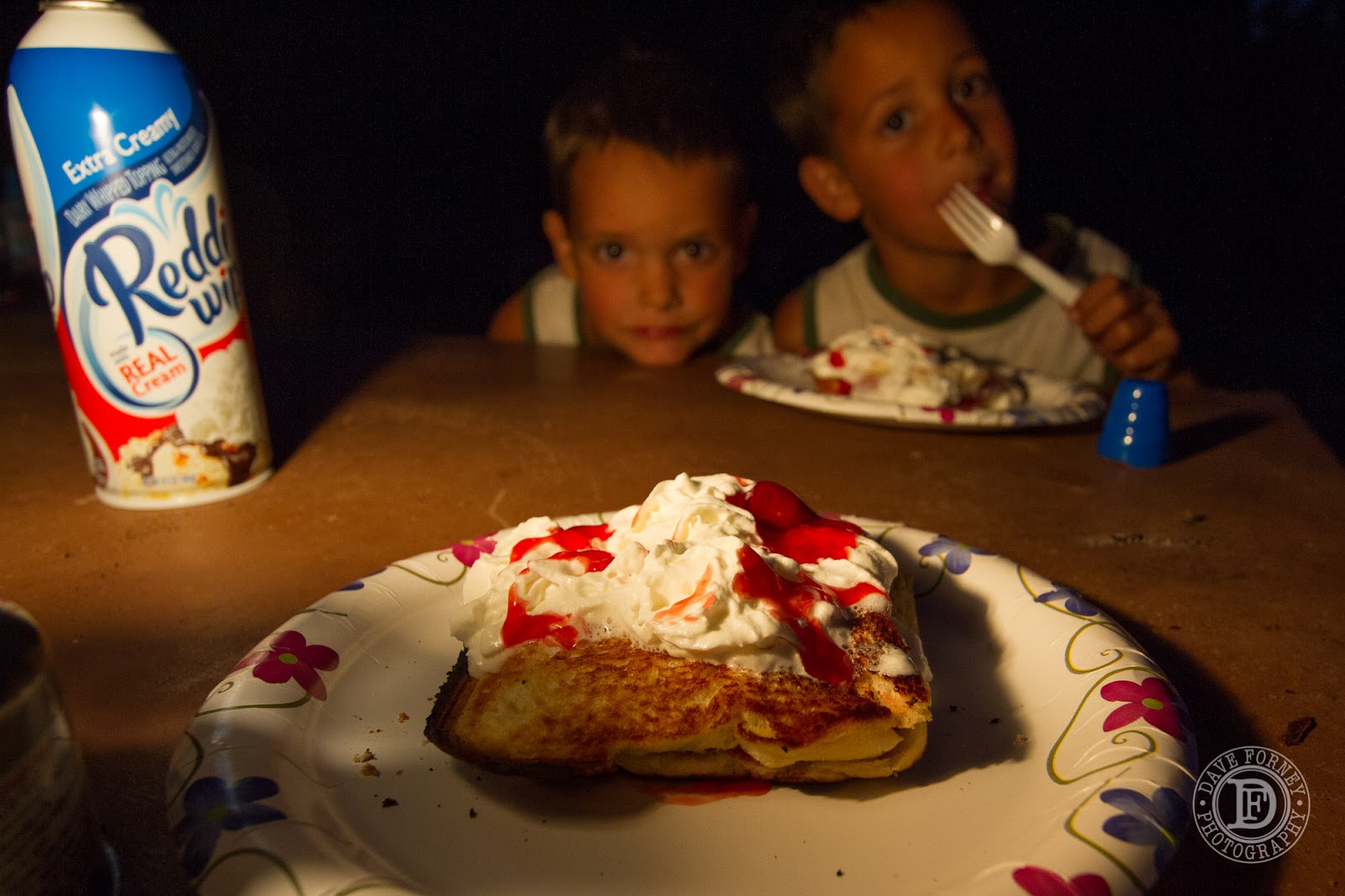 Once the sun fully set, the stars came out and we enjoyed staring up and trying to grasp the magnitude of God's creation.  (That streak on the left is from a plane, probably departing from distant Las Vegas.) 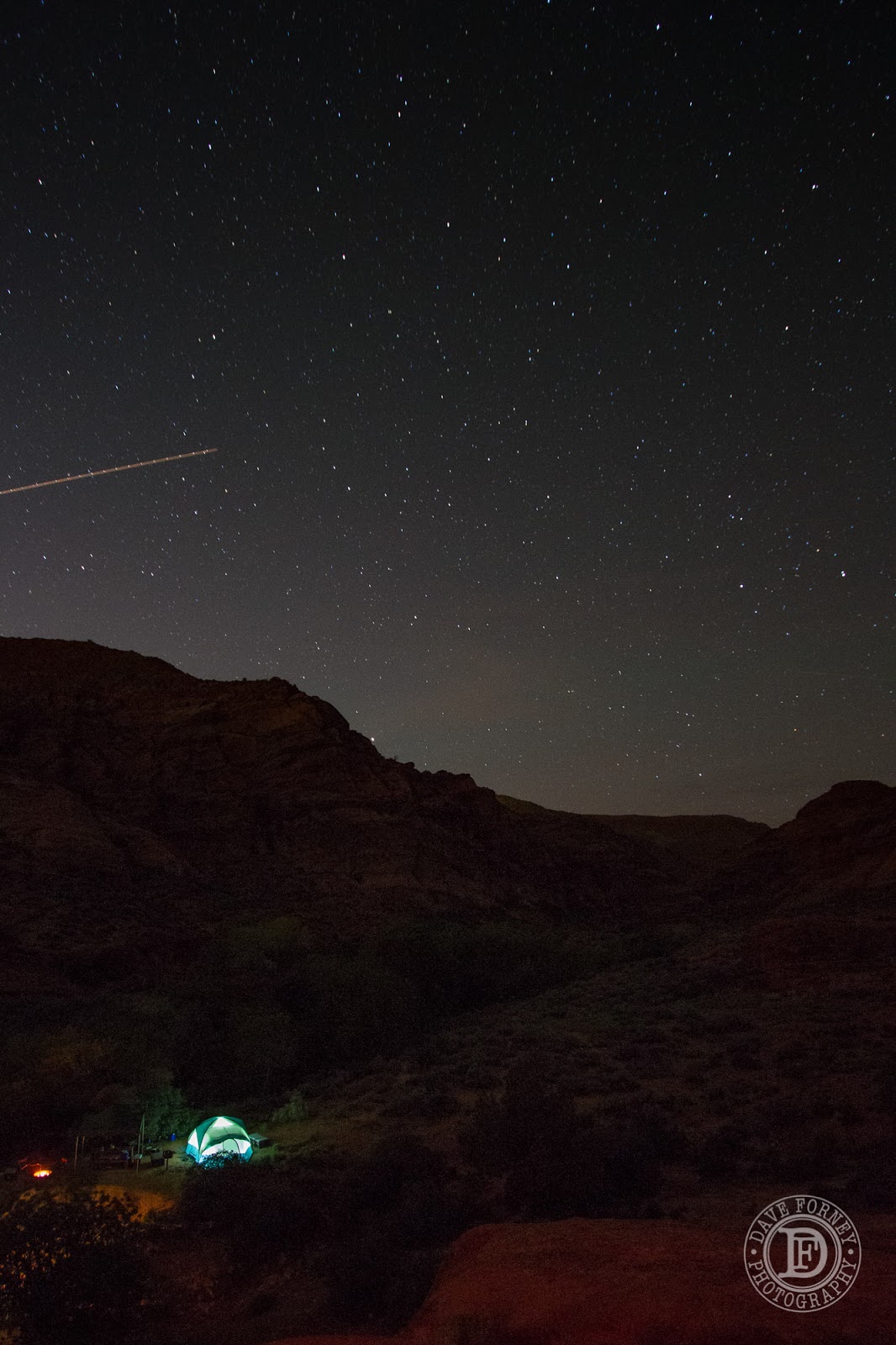 This shot, below, was taken much later, after everyone else was already asleep in the tent.  I love sitting out and gazing up at the stars.  As beautiful as this was, it really didn't compare to the starry nights we had up in Bryce Canyon, and Yellowstone, where there's less light pollution and therefore darker nights, with more visible stars.  If you haven't already seen them you can check a few of those pictures out here: Bryce Canyon 1,  Bryce Canyon 2,  Bryce Canyon 4,  or Yellowstone 1, Yellowstone 3.

Can you spot the North Star below? 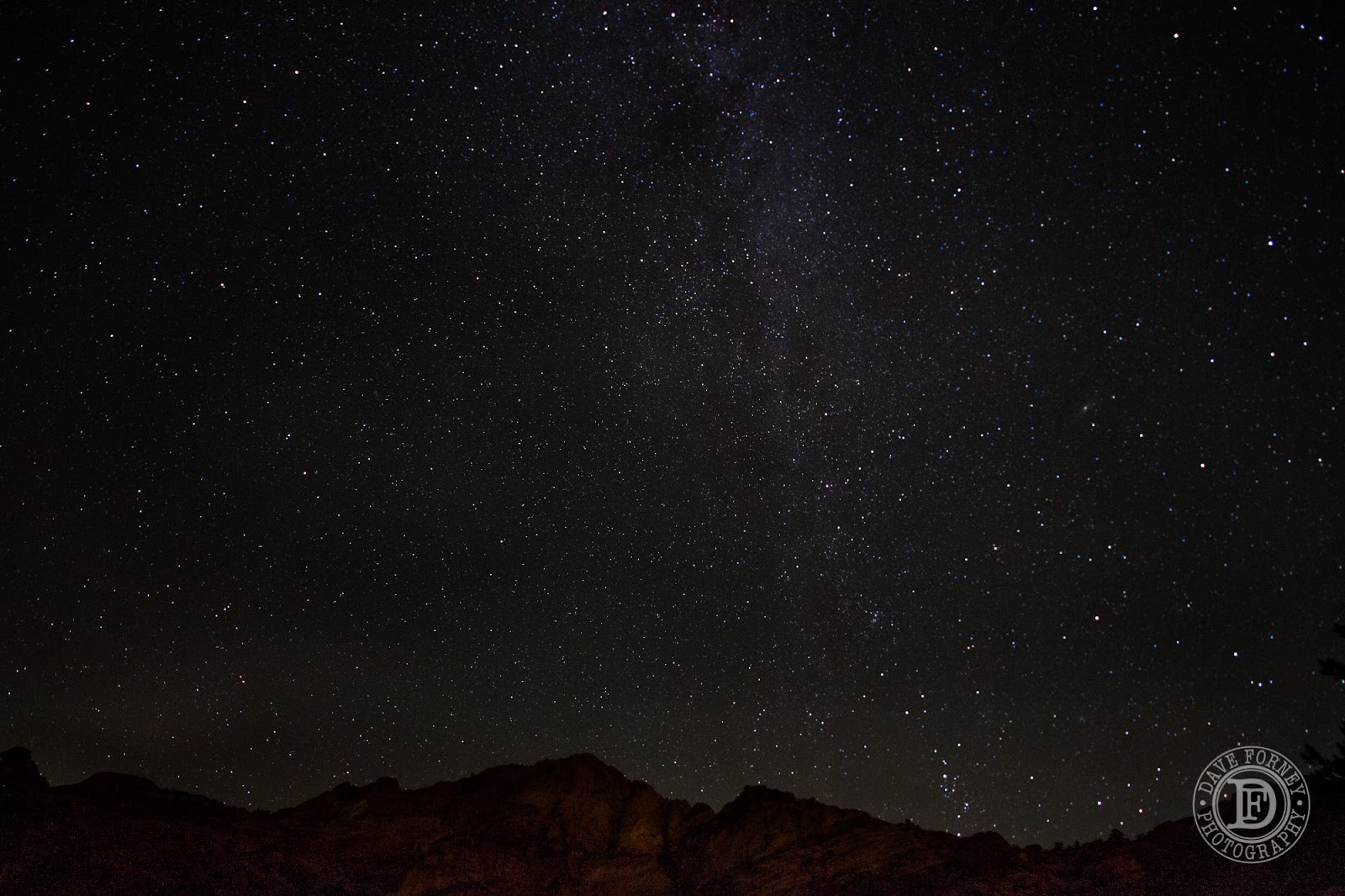 Does this help?  That's how much the earth rotated in 25 minutes of exposure.  This shot reminds me of many years ago, way back in 1993, when I spent the summer working in the Iteri village deep in jungles of the Sepik region of Papua New Guinea.  One night while I was there I did a similar exposure, but that one lasted most of the night.  The results were actually pretty striking.  Back then it was film cameras, not digital.  So there was no way to instantly check your results.  I was shooting all slides--Kodachrome 64 or 100 or 200 or 400...  I put the camera out on the grass airstrip, surrounded by jungle on all sides and a billion stars overhead.  I got everything set up just right and locked the shutter open.  Then I went to bed.  I woke up before dawn and brought it all back to the hut.  Then, I anxiously waited for over a month until I returned to the U.S. and had the slides developed so I could see the results.  I remember being pretty stoked with what I got--but frankly I have no idea where those pictures even are now.  Probably buried deep under my pile of old junk from my high school days in my parents attic. Someday I should dig them all out and scan them into digital files and share a few with you. 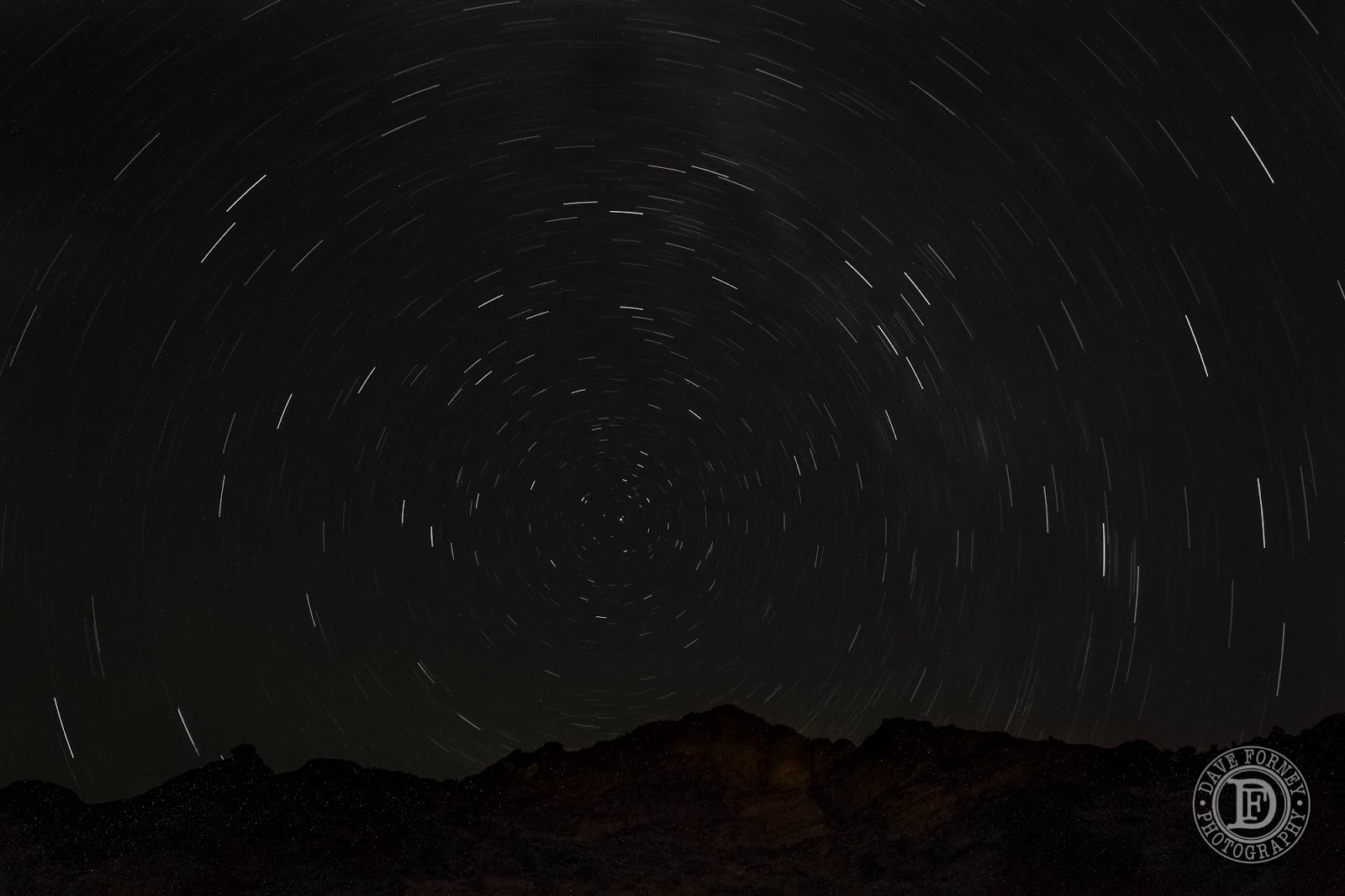 Anyway, back to the present...or at least last fall.  This is the scene that greated us each morning when we awoke.  Amazing hugh?  Absolutely brilliant colors--blue skies, orange-red cliffs, green scrub and trees.  The air was so clean and fresh. (This is taken from the exact opposite direction of the first picture in this post at the top.) 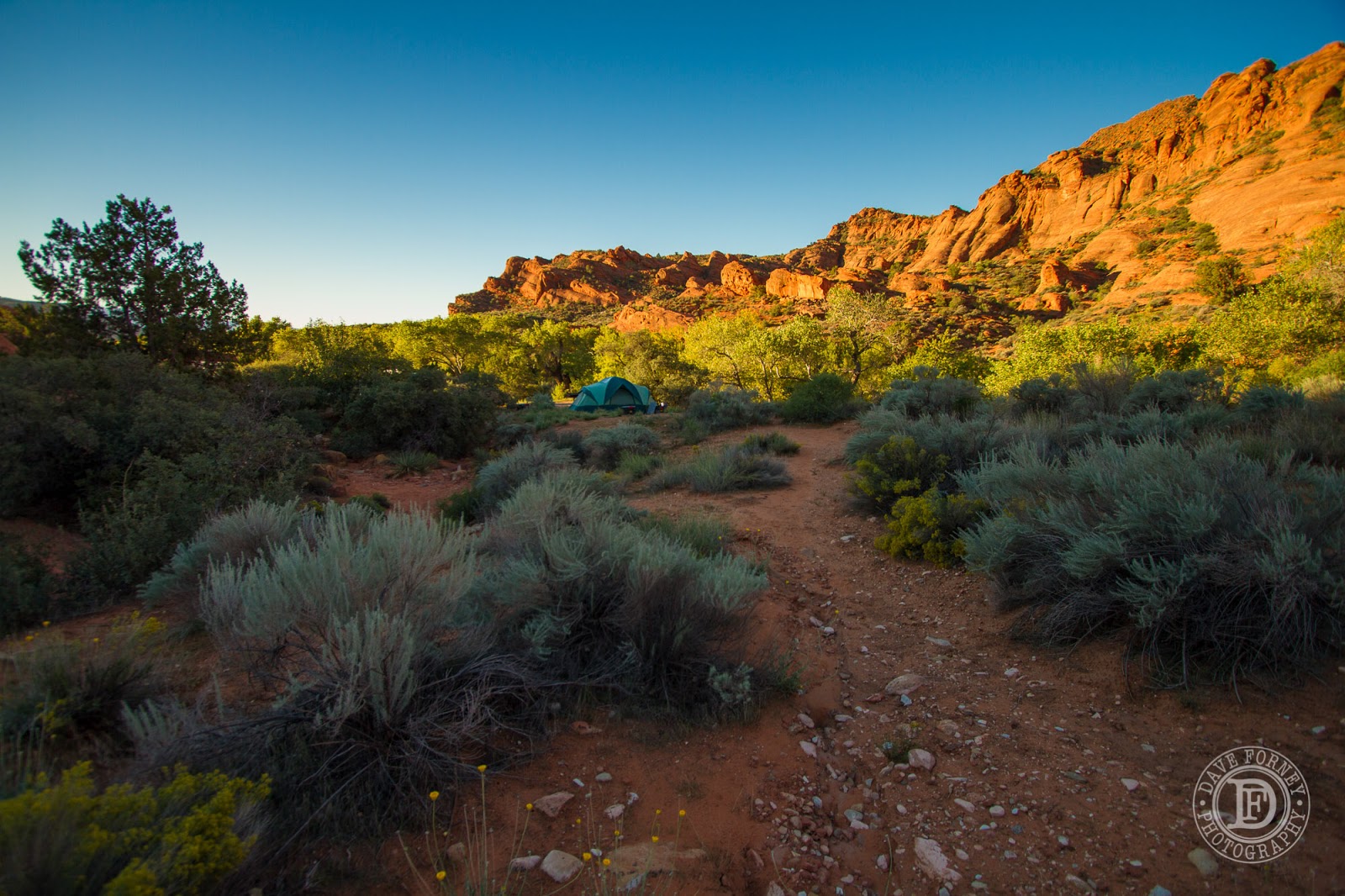 I was usually up in the dark, before everyone began to stir, making coffee for Joy and I, and getting hot chocolate ready for the kids.  That was especially necessary up in the northern parks like Glacier and Yellowstone, where the morning temperatures were at or below freezing, and we were absolutely freezing our buns off, being used to tropical temperatures.  But here the temperatures were "just right" so it was more about the ambiance and experience, rather than needing to warm up.

Some mornings we kept it simple, like instant oatmeal and a banana.  But often I went all out.  This morning was one of those days, and I was obviously behind schedule as it's already quite light outside. 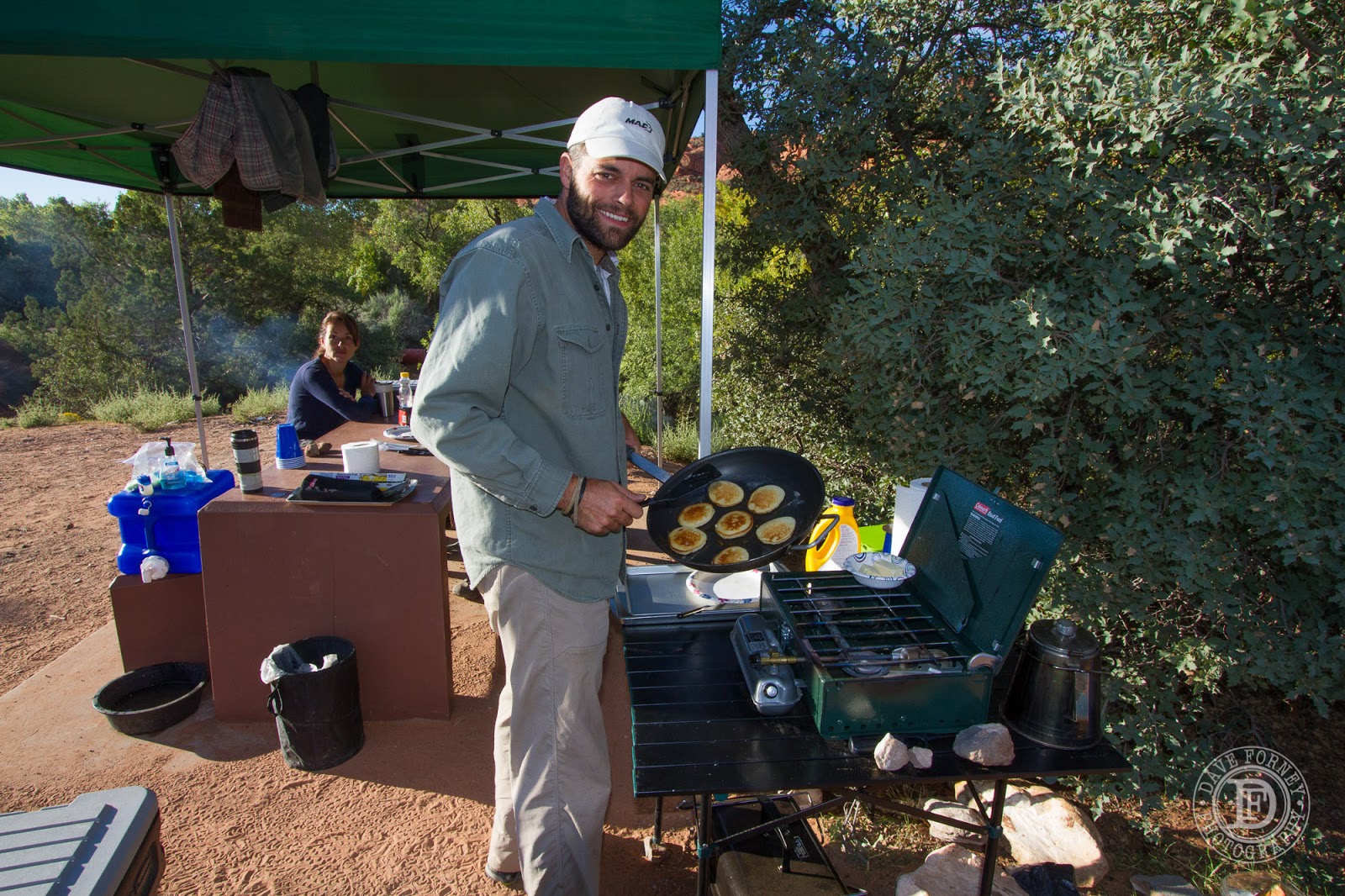 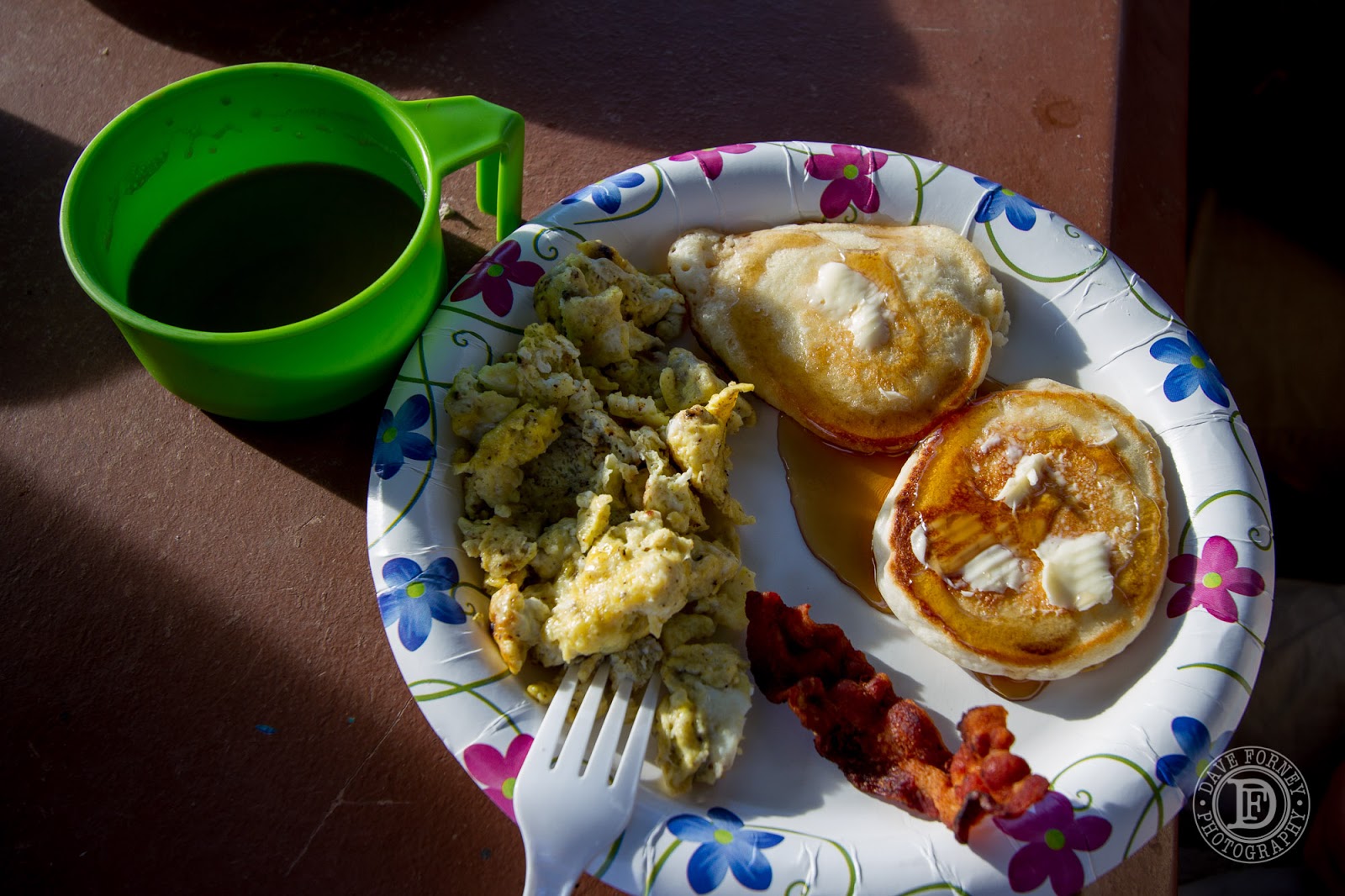 This picture pretty much sums up the entire wilderness camping experience for Joy, and for our family.  It was so refreshing and rejuvenating!  We were pretty exhausted back then, and we needed the time as a family, away from the distractions and the busyness of life and ministry, to just soak up God's creation and be together as a family and focus on Him.  It was absolutely invaluable! 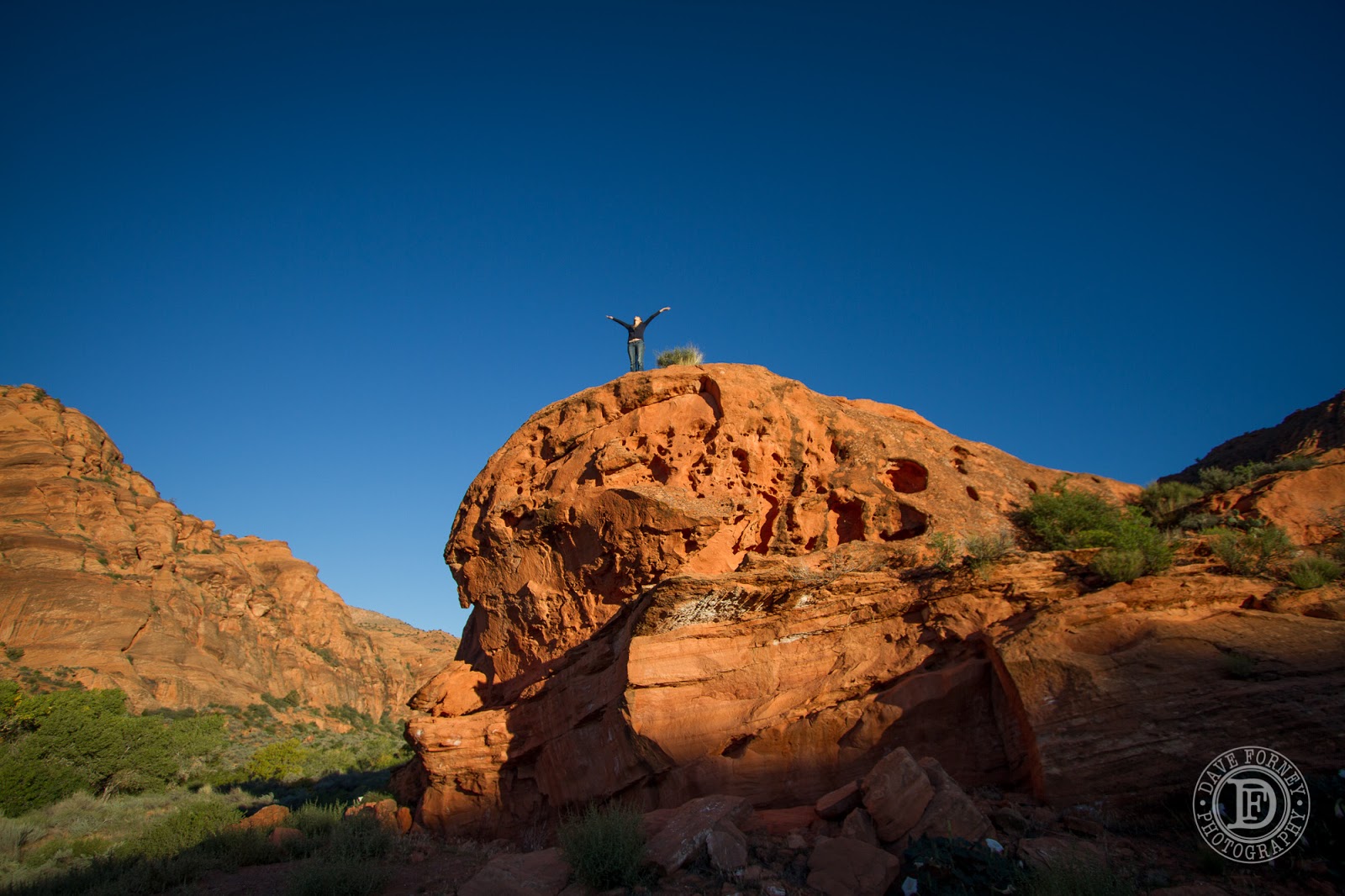 Praise God Dave! About passing the exam. We have been praying for you in our church.
Sandy in the UK
PSLove the photos!