Last fall we spent a few weeks camping in some of the epic National Parks in the U.S.  My previous post was on the Angels Landing Trail in Zion National Park.  Since I'm back to that theme, I'll finish up with the last place we stayed on our camping trip--which although one of our favorites, wasn't a national park at all.  We only stayed in Zion for a day and a half, because although it was absolutely breath-taking, and I could have spent many days exploring there, it was just way too crammed with people for our liking--the campsites, the roads, the bus system--everything.  So I spent the first night studying the maps of the area and found a little spot off the beaten trail that looked promising...Red Cliffs National Conservation Area. 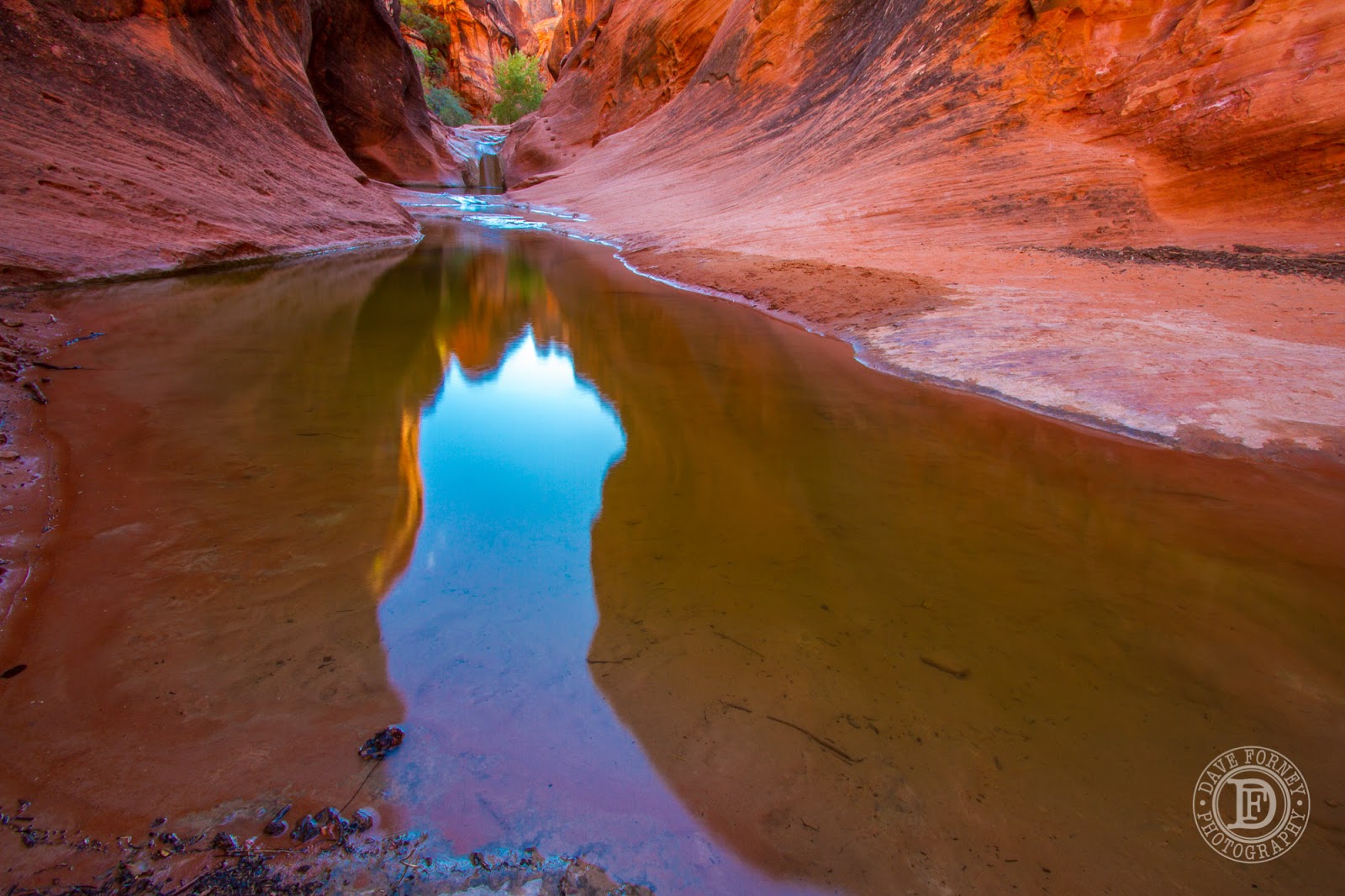 It was about 30 minutes to the West of Zion, so we figured we could camp there, and then drive into Zion to explore each day for a few days, and at least avoid some of the crowds while camping.  That was our plan anyway.  But once we got there we didn't see much point in leaving.  Other than a few excursions to find ice and some food supplies, we pretty much spent the majority of the next three or four days relaxing and playing in and on the red cliffs that surrounded our campsite.  If you look closely in the picture below you can see our kids scrambling up the face of that sloping rock, and the top of our green canvas shade tent sticking up from behind it. 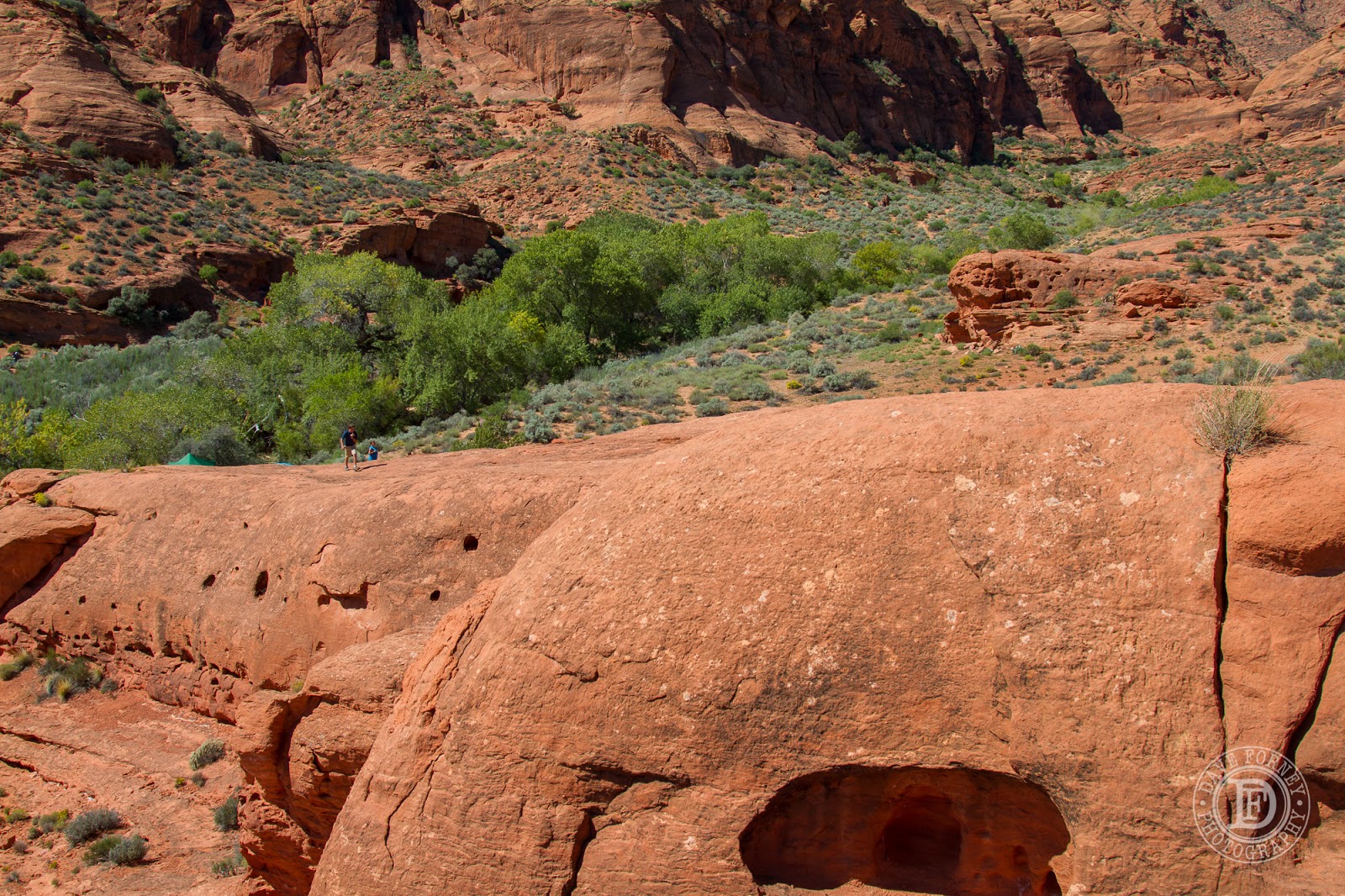 We had the place mostly to ourselves and the kids were having a blast climbing on the rocks that were everywhere. 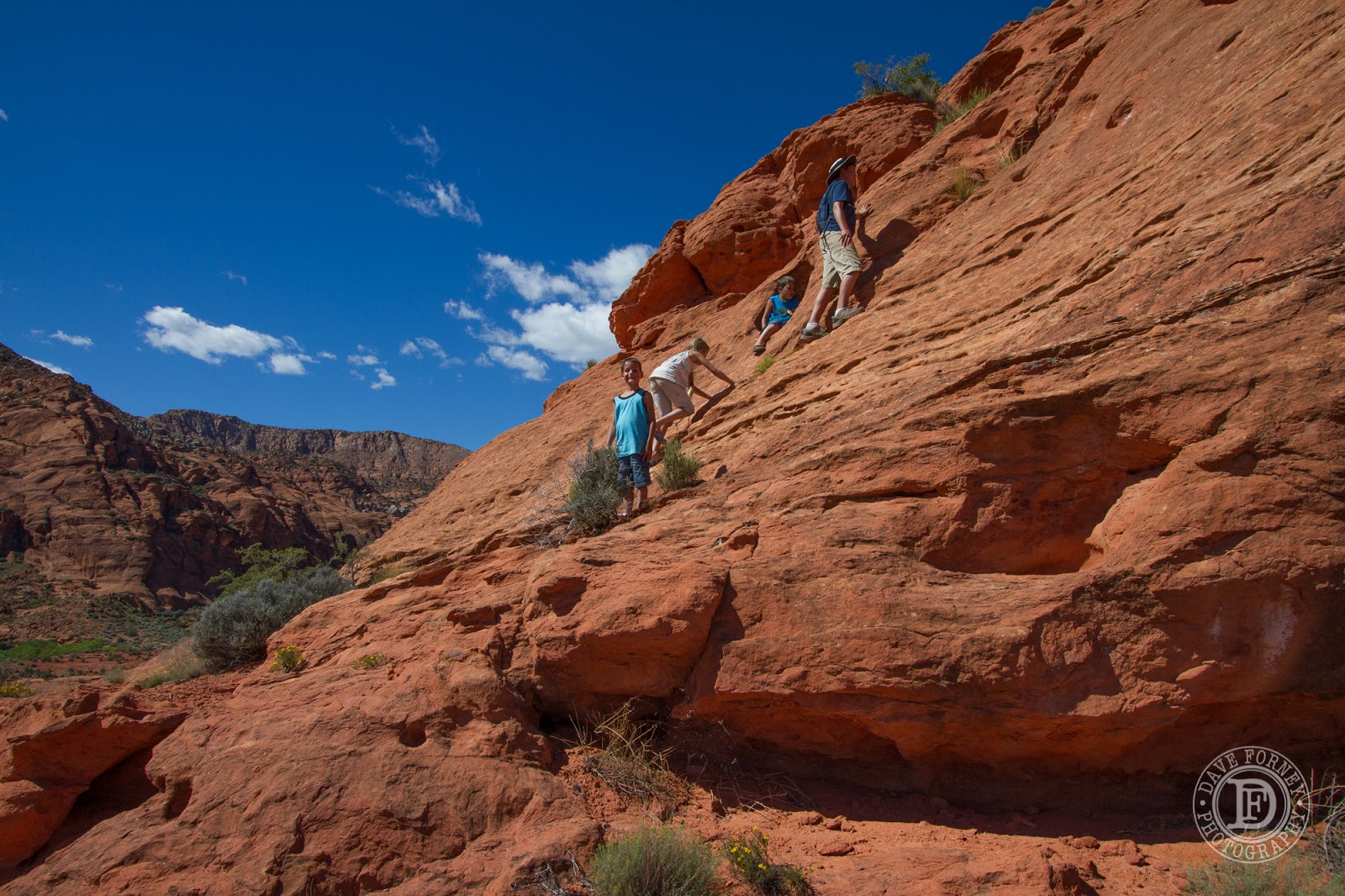 Again, if you look closely you can find the kids in the distance, just left of center, up near the top of the rocks. 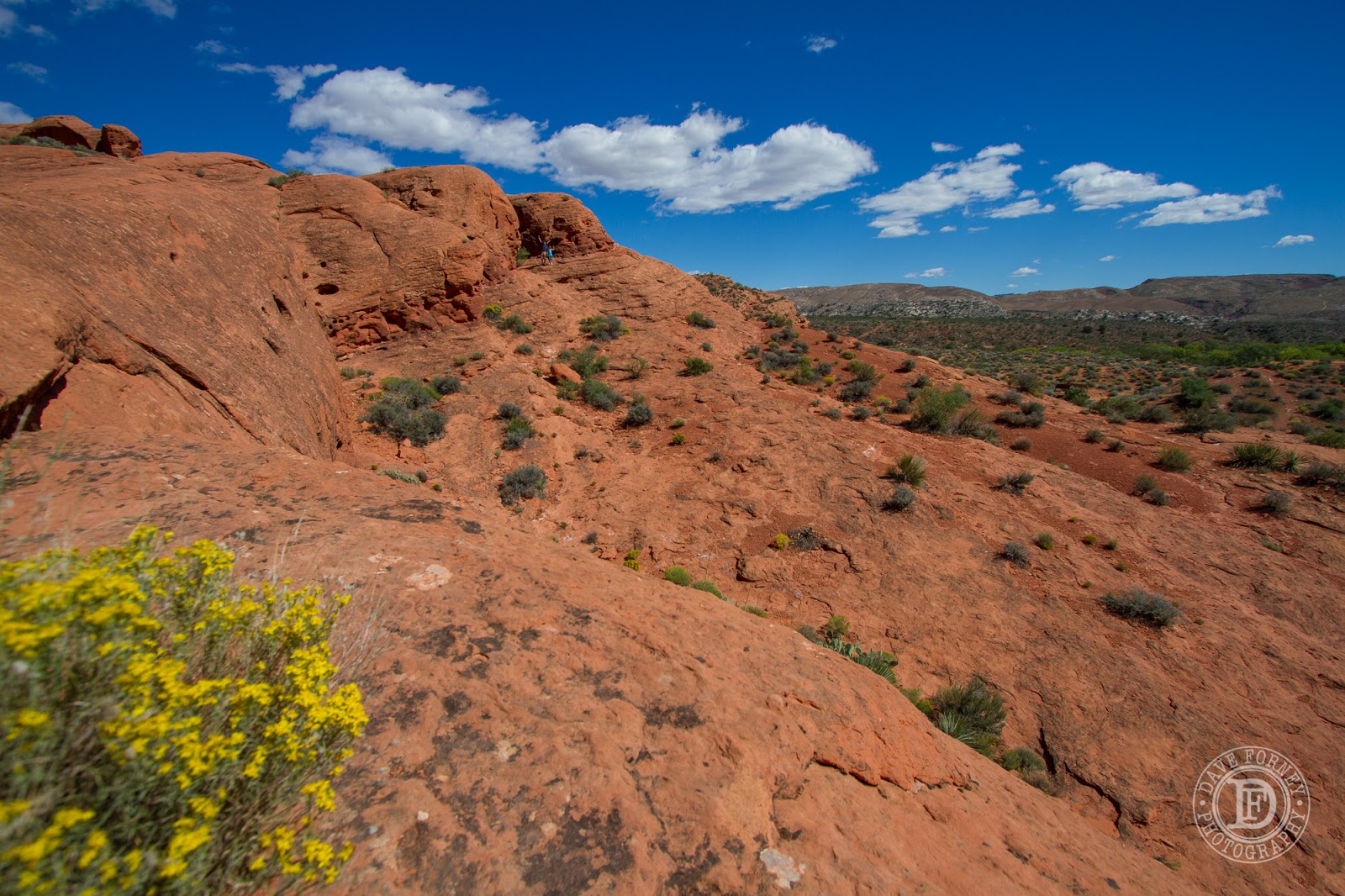 Since the kids were so content scrambling around on the rocks near our campsite, and Joy was happily watching them while reading a book, I was able to sneak away and do some of my own exploring.  I following a stream and eventually it led to a narrow, winding canyon.  I had the camera and was taking some pictures, but decided that without a person in this photo you really don't have any perspective on the size.  So I took a cheesy self-portrait. 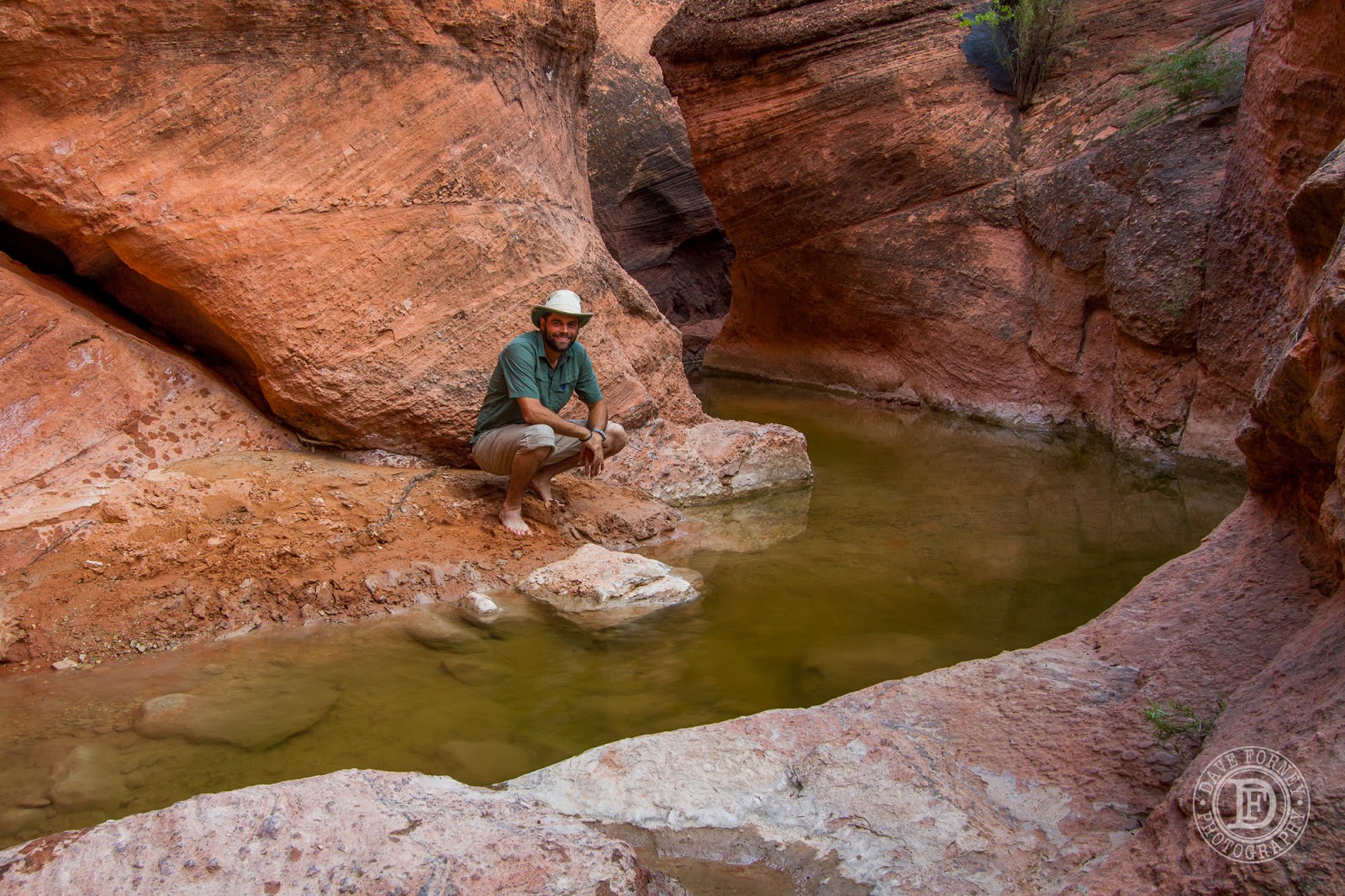 And then, after working myself way up high onto some cliffs surrounding the valley, and being in the cheesy-self-portrait-mood, I took another.  You can't tell from the picture, but it drops vertically a couple of hundred feet or so directly behind my feet.  I don't know why, but I like standing on the edge of things. 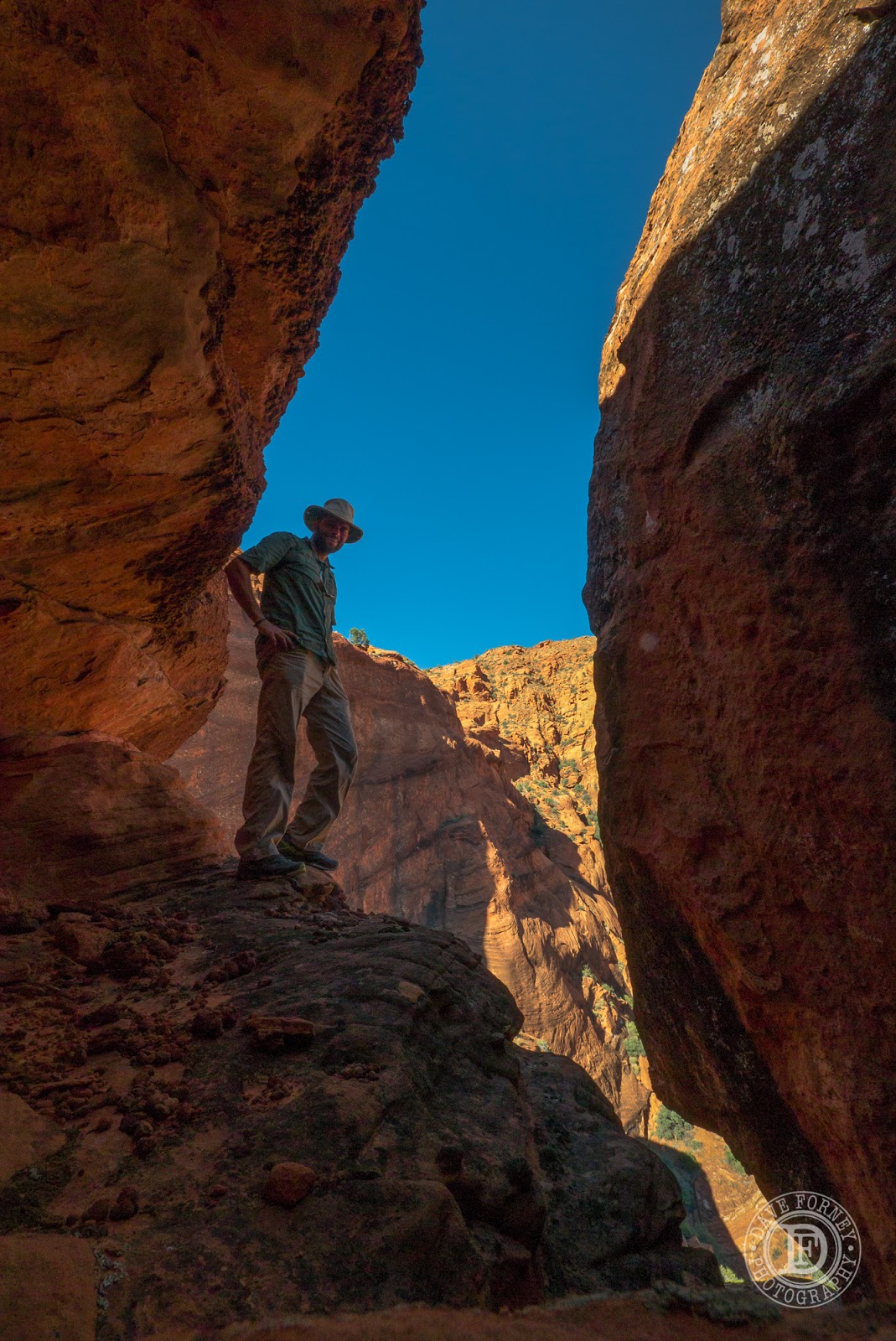 Mine wasn't the only cheesy portrait I took though.  Yeah, as I was scrambling back down I came across this rather large fellow, hiding under a clump of grass I was about to step on.  He gave me a loud rattle just before I made the biggest mistake of my life--or death.  I accidentally forgot to tell Joy about the rattle snake until much later, knowing that we'd of had to pack everything up right then and there and drive at least 2,000 miles north, until she was sure we were out of rattlesnake country.  Somehow, even though she's terrified of snakes and knows they are out there, it's when you actually spot one that she feels you must take action.  So I just casually mentioned later to the kids that this might be rattlesnake country, and reminded them to be vigilant, and of the places they like to hide. 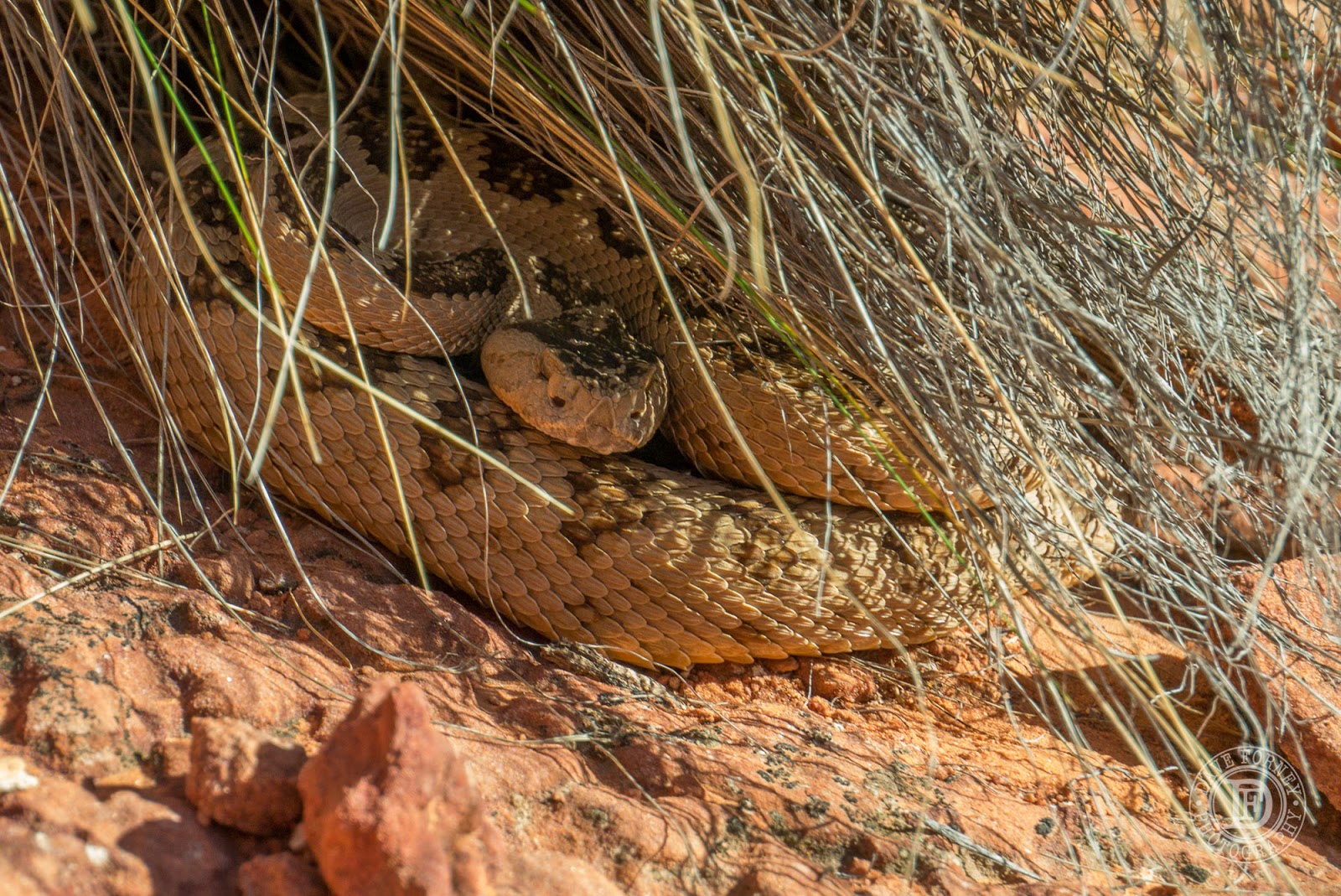 I did take a few nicer shots as well.  As the late afternoon sun began to work it's magic on the landscape, it became obvious why they call the place Red Cliffs.  The colors were amazing! 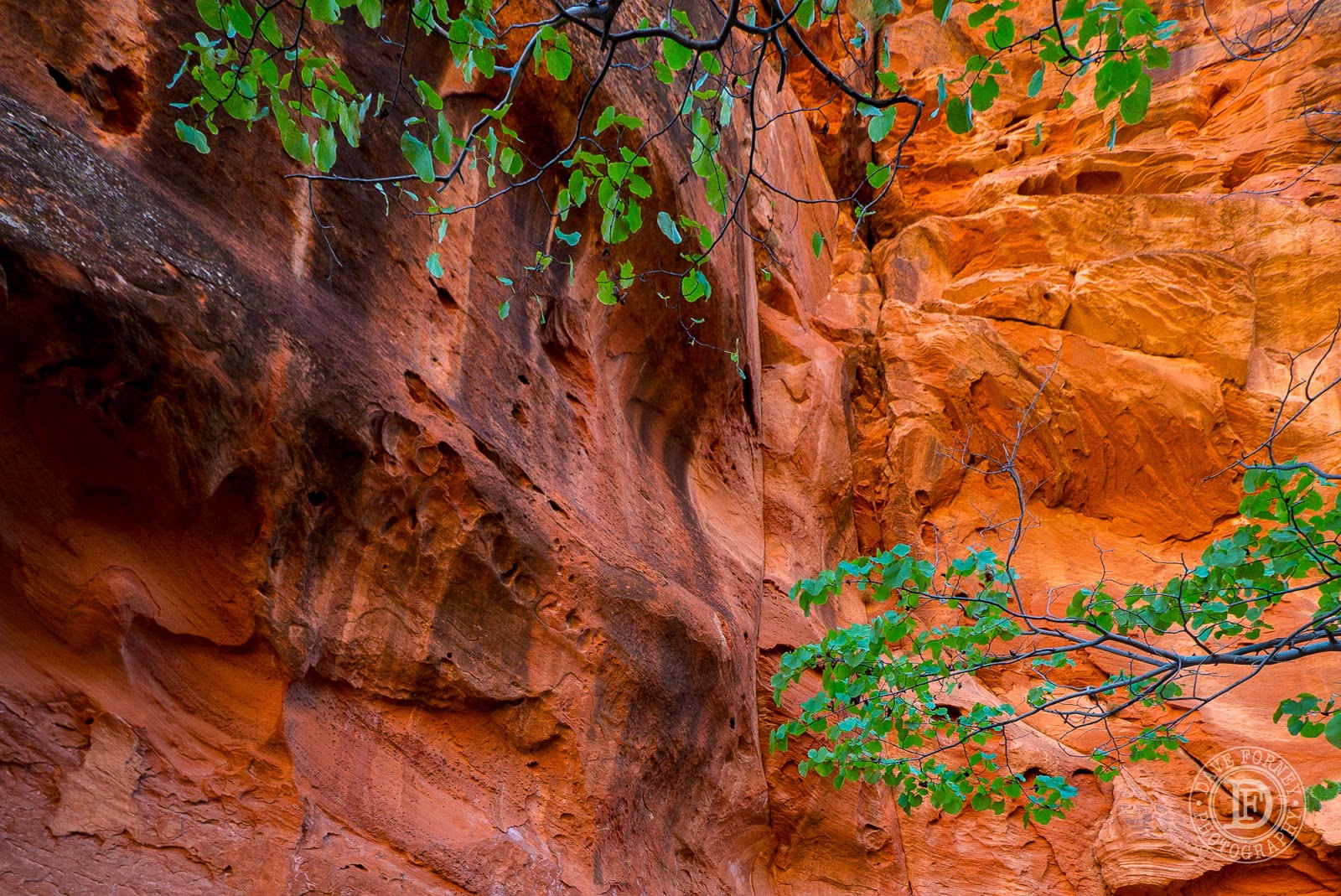 Even the reflections in the puddles and pools of water were vivid. 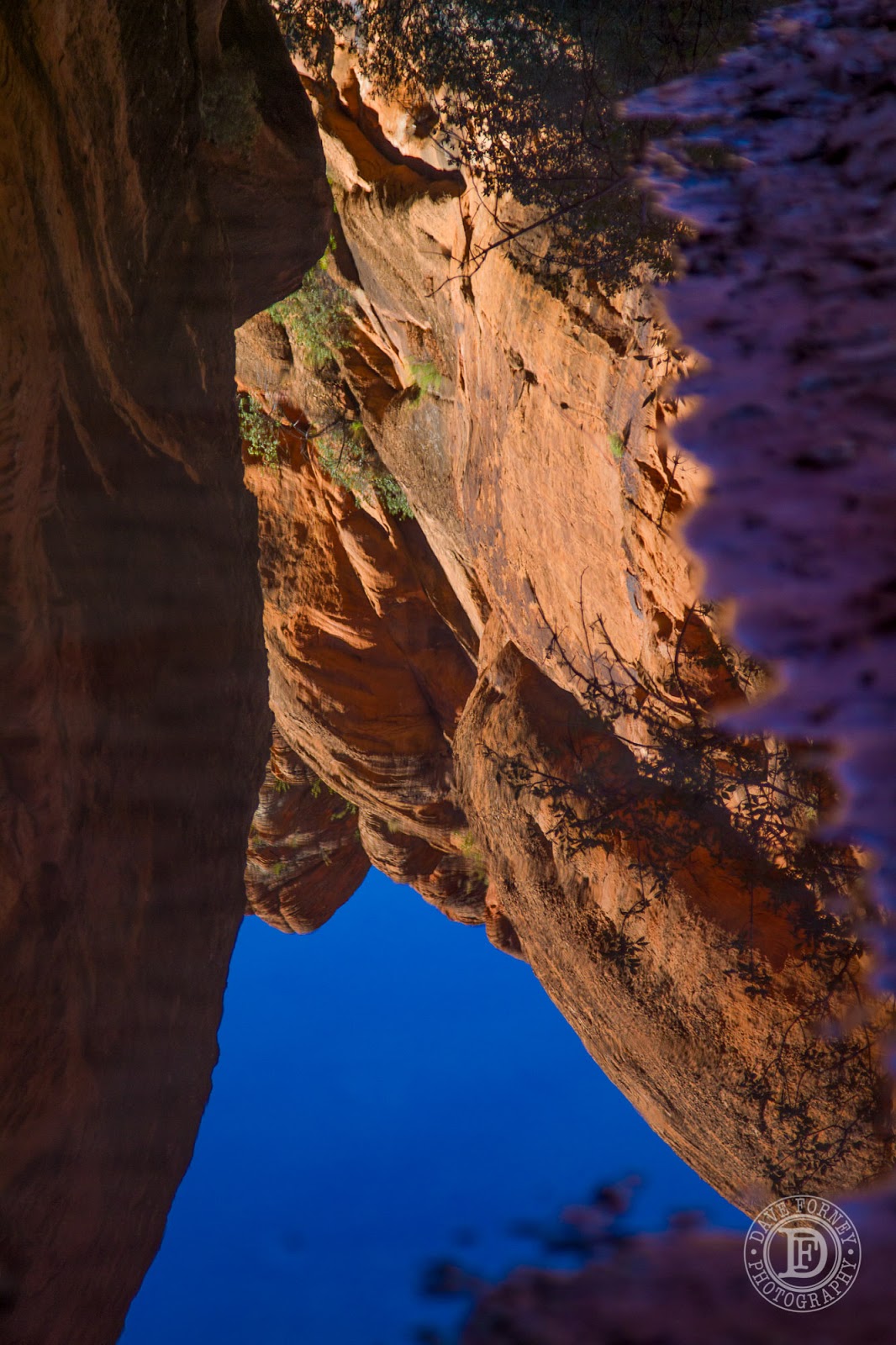 It took me about two days to convince my kids that they should explore up the canyon with me.  Up to that point they were totally content to explore all of the rocks and boulders in the vicinity of our camp.  But finally Britt and Hannah came along with me for a walk.  They loved the stream and canyon and started working on their younger brothers and mom to join. 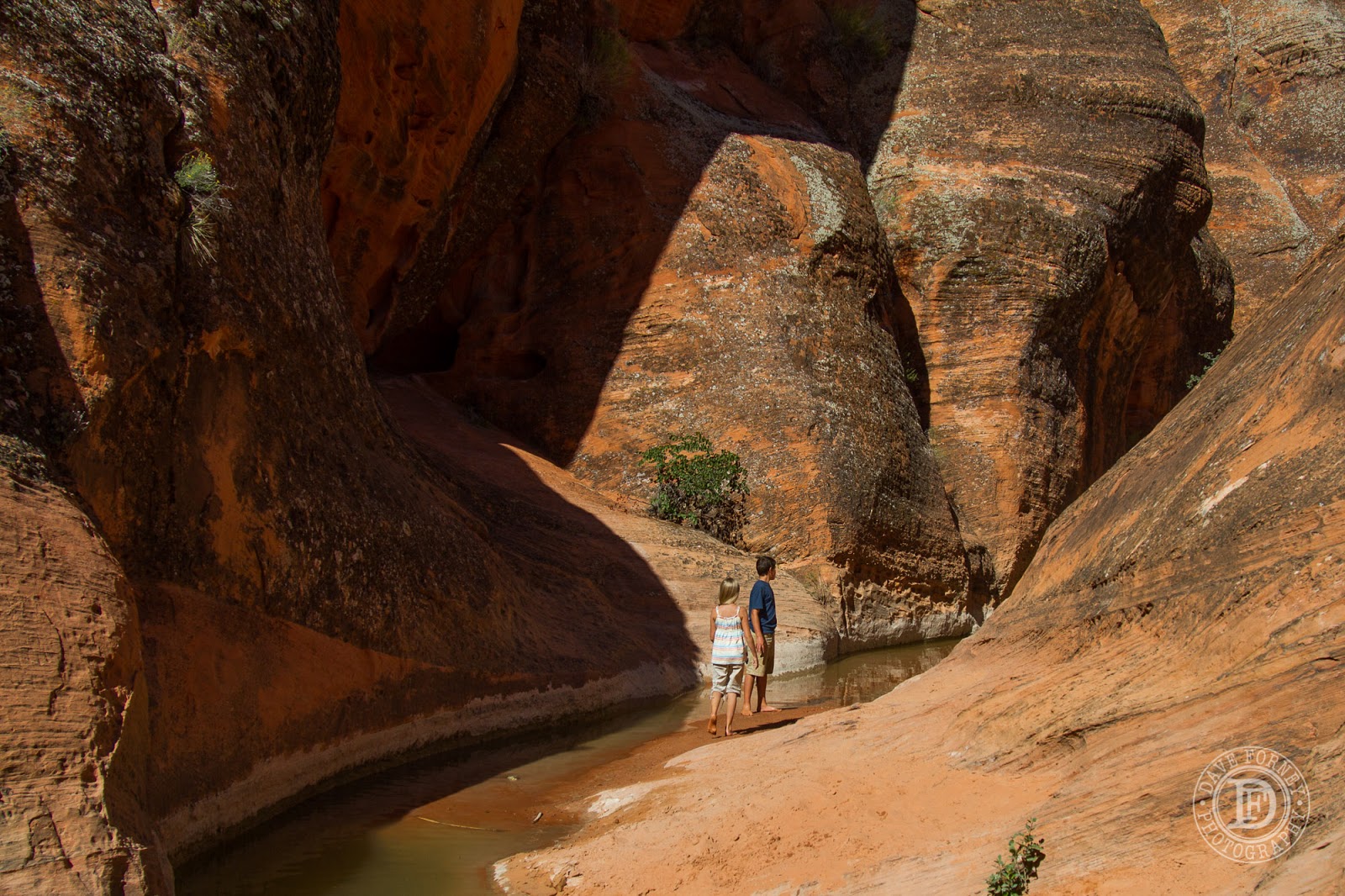 So on our last day there, with the help of my older two kids' prodding's, the rest of the family finally decided to come with us to explore further up the little canyon.  It was a glorious afternoon, and we had a great time!  The shot below was not posed.  I was out in front with the older kids and the camera, and every time I looked back it seemed like Joy was stopping and staring in awe at the beauty around us.   Well, either that or she was trying to make sure the twins weren't getting into too much trouble.  I just loved the way the light and shadows and colors were all working together here.  And Joy and the kids give you an idea of the size of the rocks. 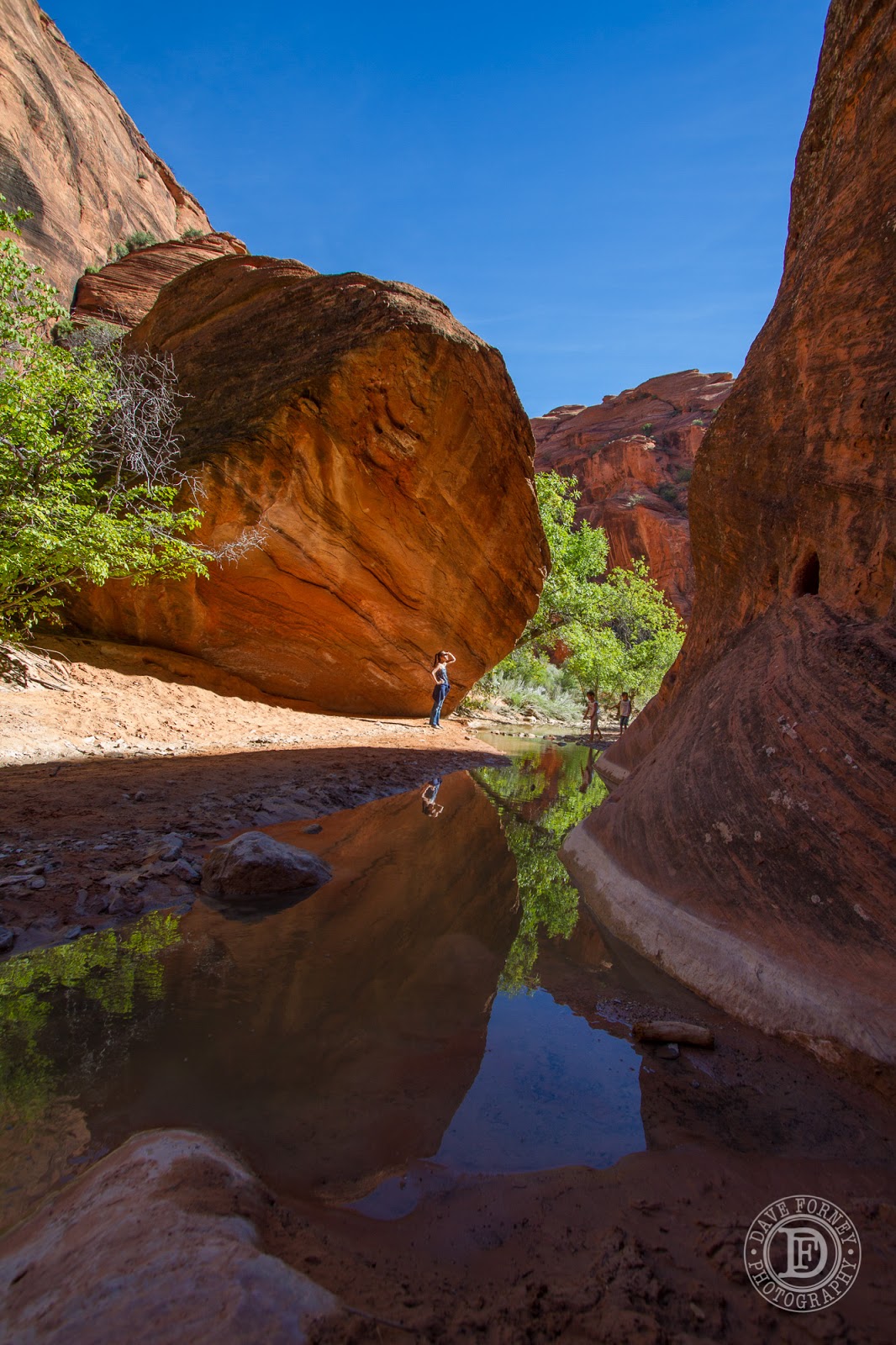 We came to the spot where you have to work your way around a ledge, where there's some footsteps carved into the sandstone.  When I had been here before, the water in this deep pool was crystal clear (that's the first picture at the top of this post), but today it was cloudy.  Still, it was a beautiful place. 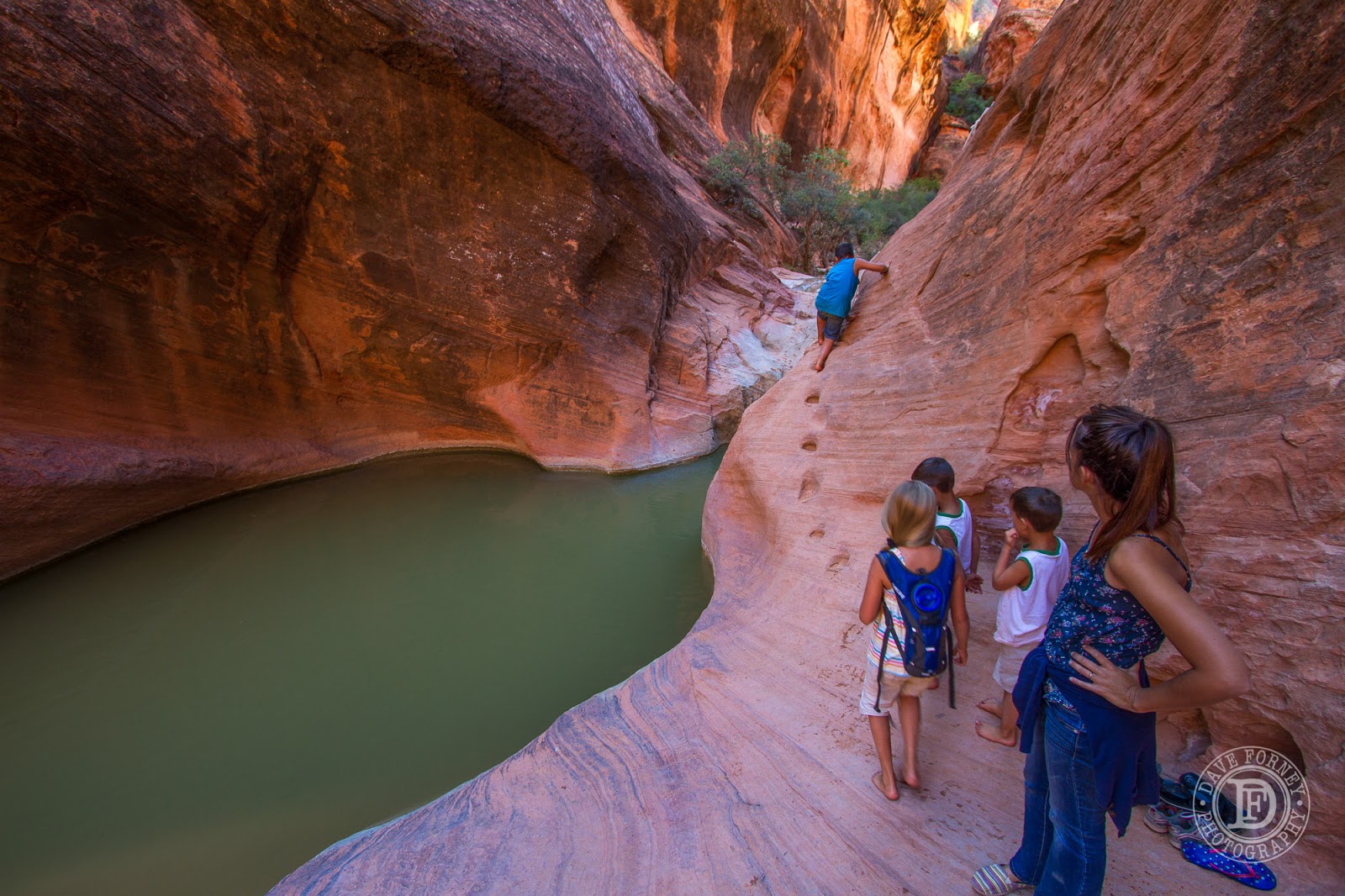 We spent a few hours playing in the stream... 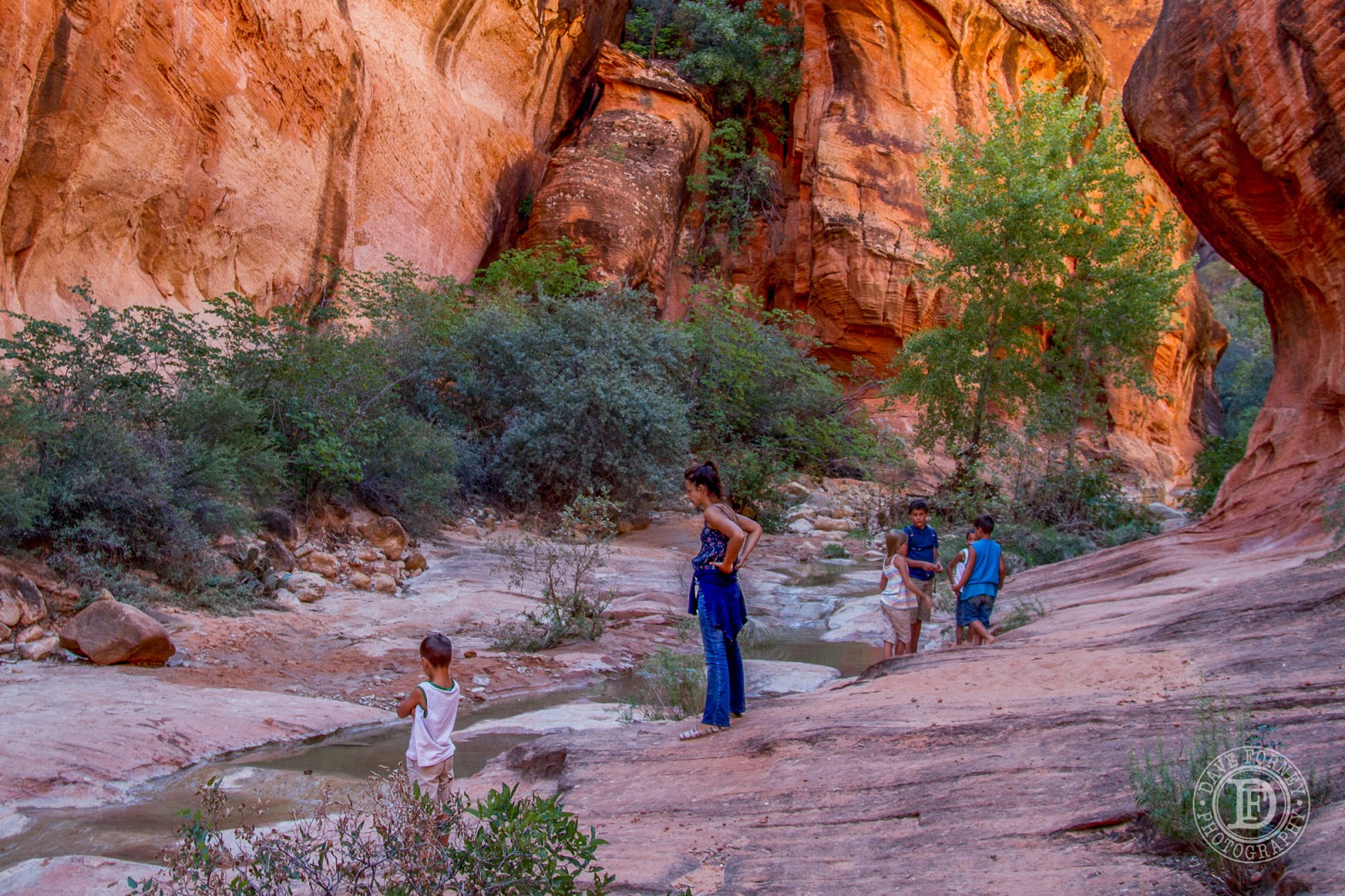 ...and climbing on the rocks. 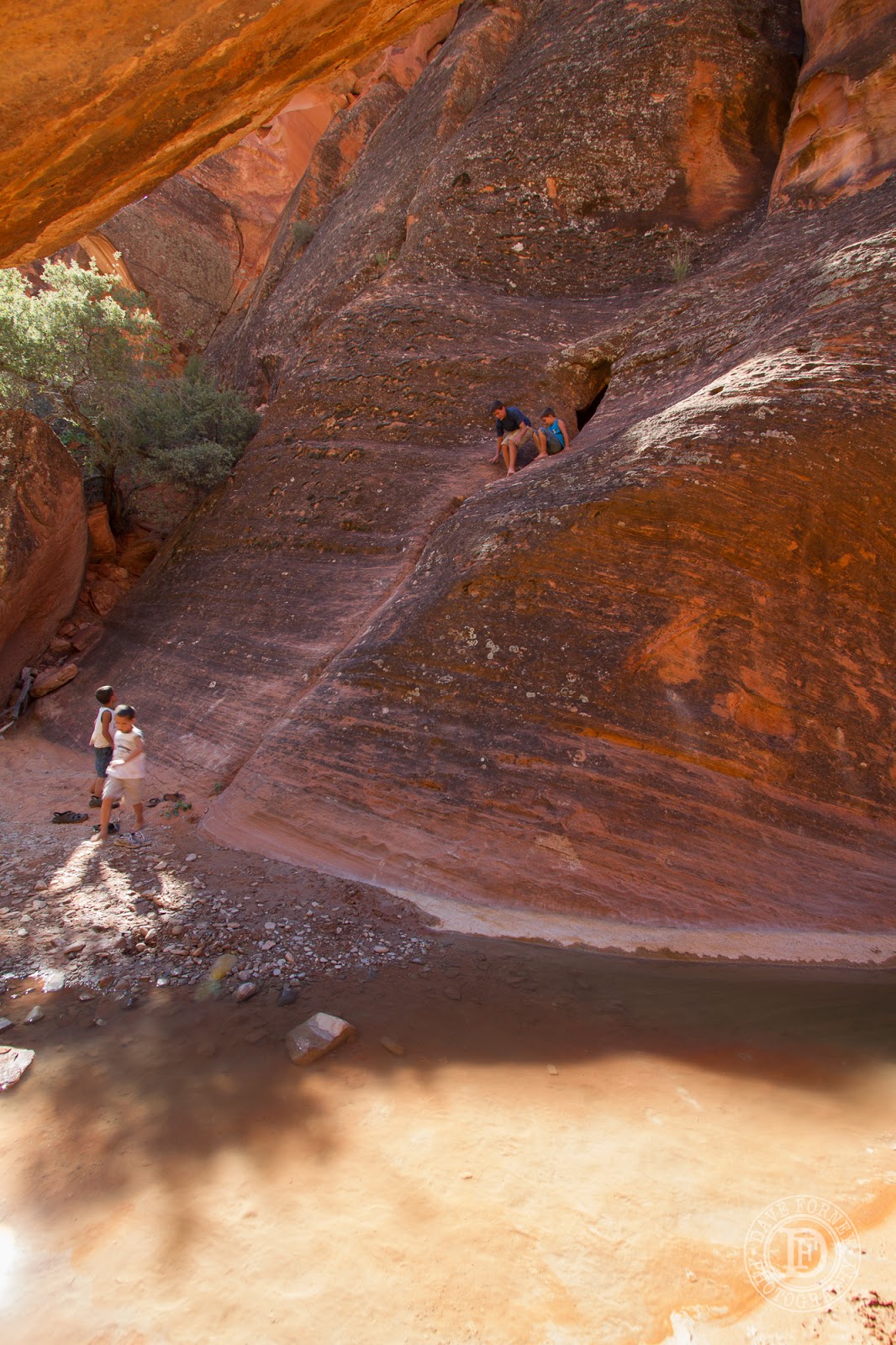 For being the only non-planned place we camped at, not to mention the least well-known, and least expensive, it turned out to be one of the favorites for our kids.  It was like a giant, natural playground!  Below, a sign of just how much fun the kids had! :-) 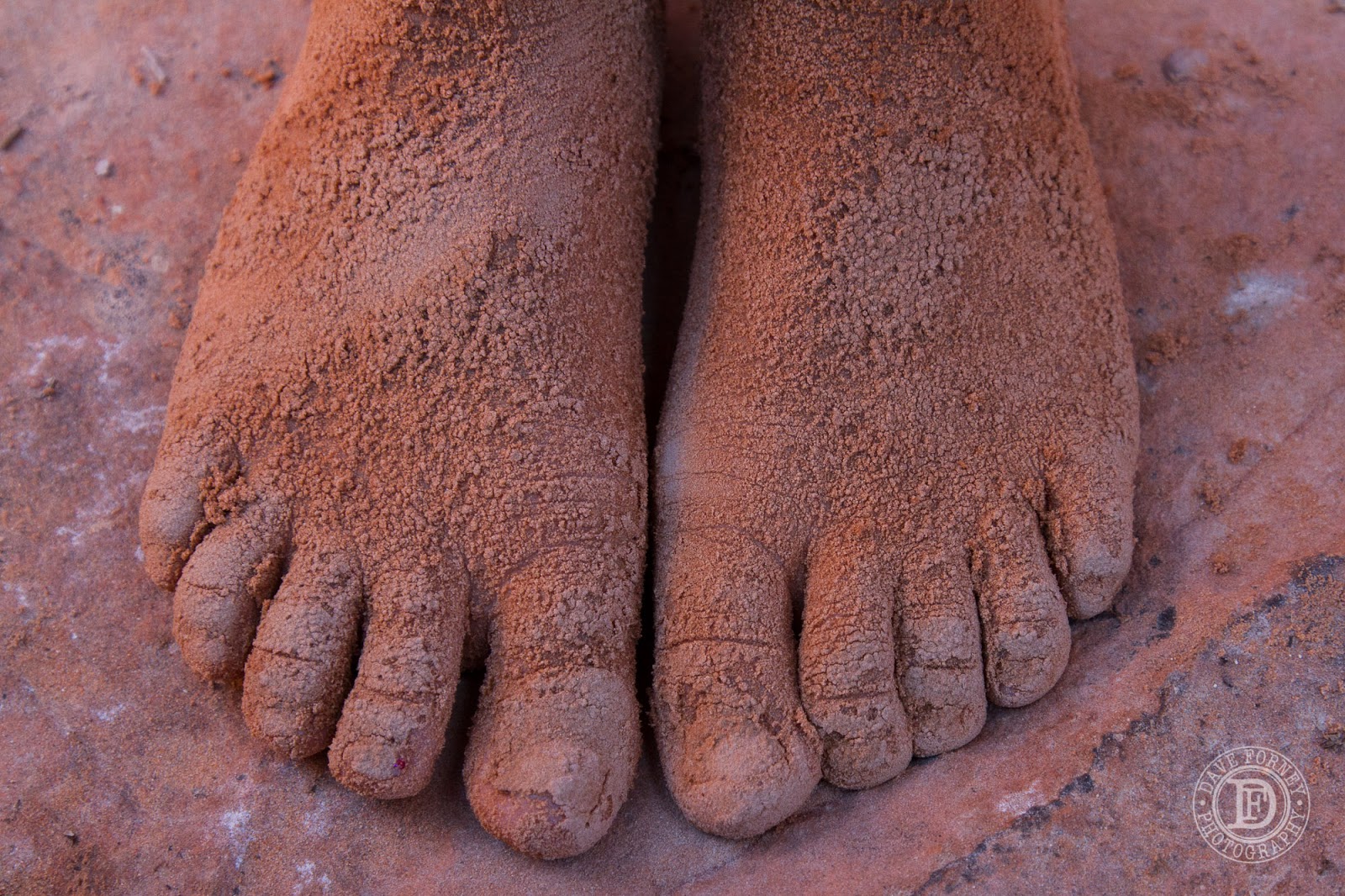 I love how you let your kids run a little wild so that they can be explorers themselves, and not just when led by their parents. Now, that's a real childhood! (and happens to produce better adults, in my opinion).

And as per normal, I want to tell you, those photos are National Geographic quality - and I'm hoping to see them there in the future :-)

Thanks Ali. My parents gave me the same freedom as a kid where I ran around exploring the jungles of Brazil. And I agree--I think that helped make me who I am today. By the way, your photos and writing on the "Monte Rosa Traverse" are equally stellar! In fact, all the photos from Switzerland (and Italy) are amazing! I absolutely have to get over there some day.

Thanks Ali. My parents gave me the same freedom as a kid where I ran around exploring the jungles of Brazil. And I agree--I think that helped make me who I am today. By the way, your photos and writing on the "Monte Rosa Traverse" are equally stellar! In fact, all the photos from Switzerland (and Italy) are amazing! I absolutely have to get over there some day.