Remember how a few weeks ago I did a post about Eastern Uganda where I showed some shots of some of the scenery over that way?  And I had a picture of a mountain top and said that some day I'm going to find a way to climb up there?  Well, that got me thinking about the Angels Landing trail that my two oldest boys and I climbed last year in Zion National Park in the U.S. 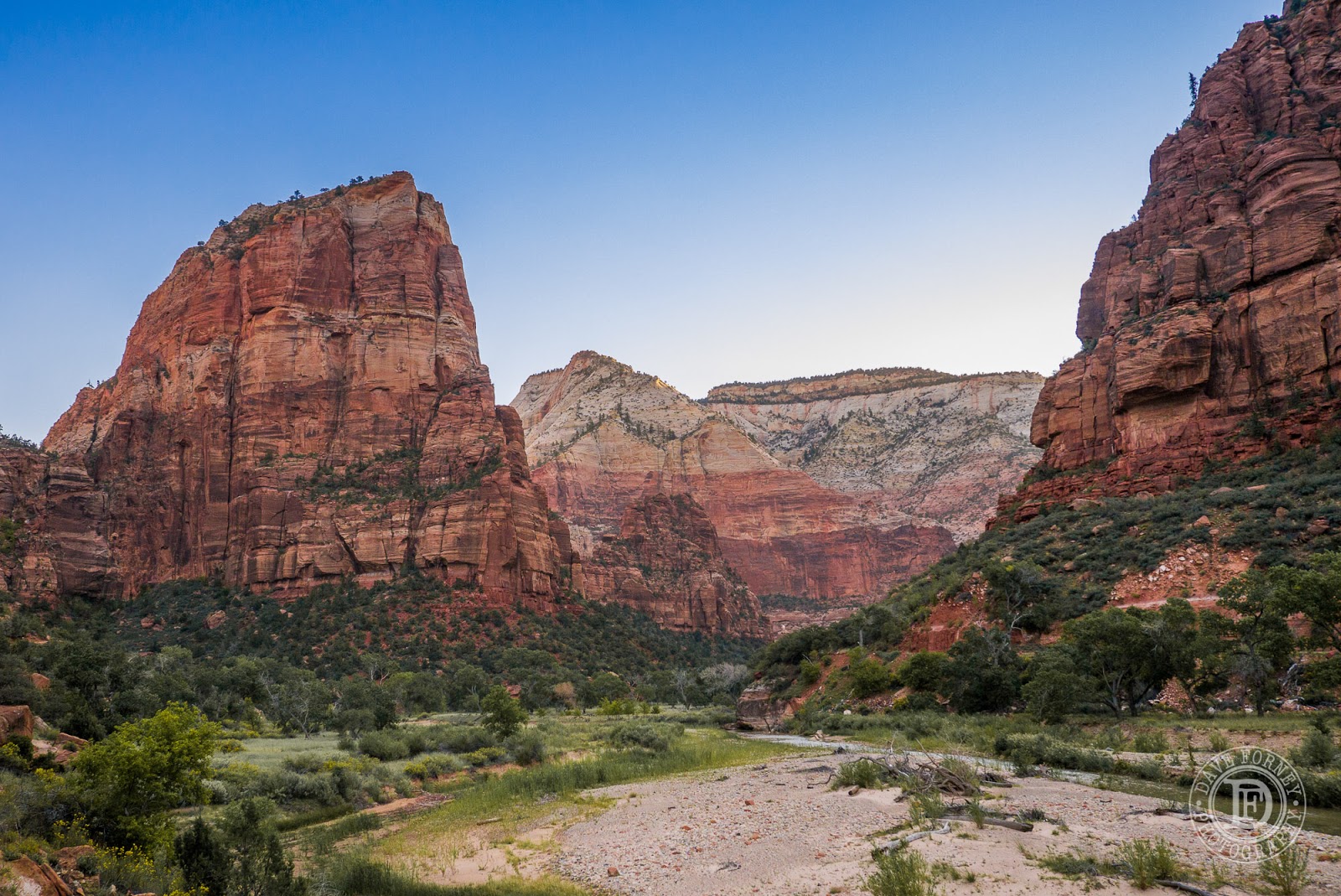 And since I'm actually not flying right now, as I wade through the process of trying to get a commercial pilot's license here, I figured I'd take a break from the East Africa stuff, and do another post or two on the U.S. National Park stuff that I never finished up earlier this year.  If you didn't get a chance to check out those posts, just go over to the column on the right and scroll back to October, 2013 and work your way forward.  Or go directly to the first post here, and then start working forward.

Anyway, as I already said, this one is about the Angels landing trail, which is in Zion National Park.  The photo above is a picture from the valley, looking up toward the rock fin, on the left side, that we were about to ascend.  Below is a picture of one section of the trail, where there are a series of very sharp switchbacks one right after the other.  This is probably one of the most scenic and craziest public "hiking" trails in the U.S.  I can't believe they actually let people use it still, as there's been quite a number of people that have fallen to their death on the trail.  They even have a prominent sign posting those figures part way up.   But the trail is absolutely amazing!  They carved it straight out of the solid rock back in 1926, and as you work your way up it's hard not to gape with your mouth open at the beauty of your surroundings...and the craziness of those people who decided to carve a trail to the top! 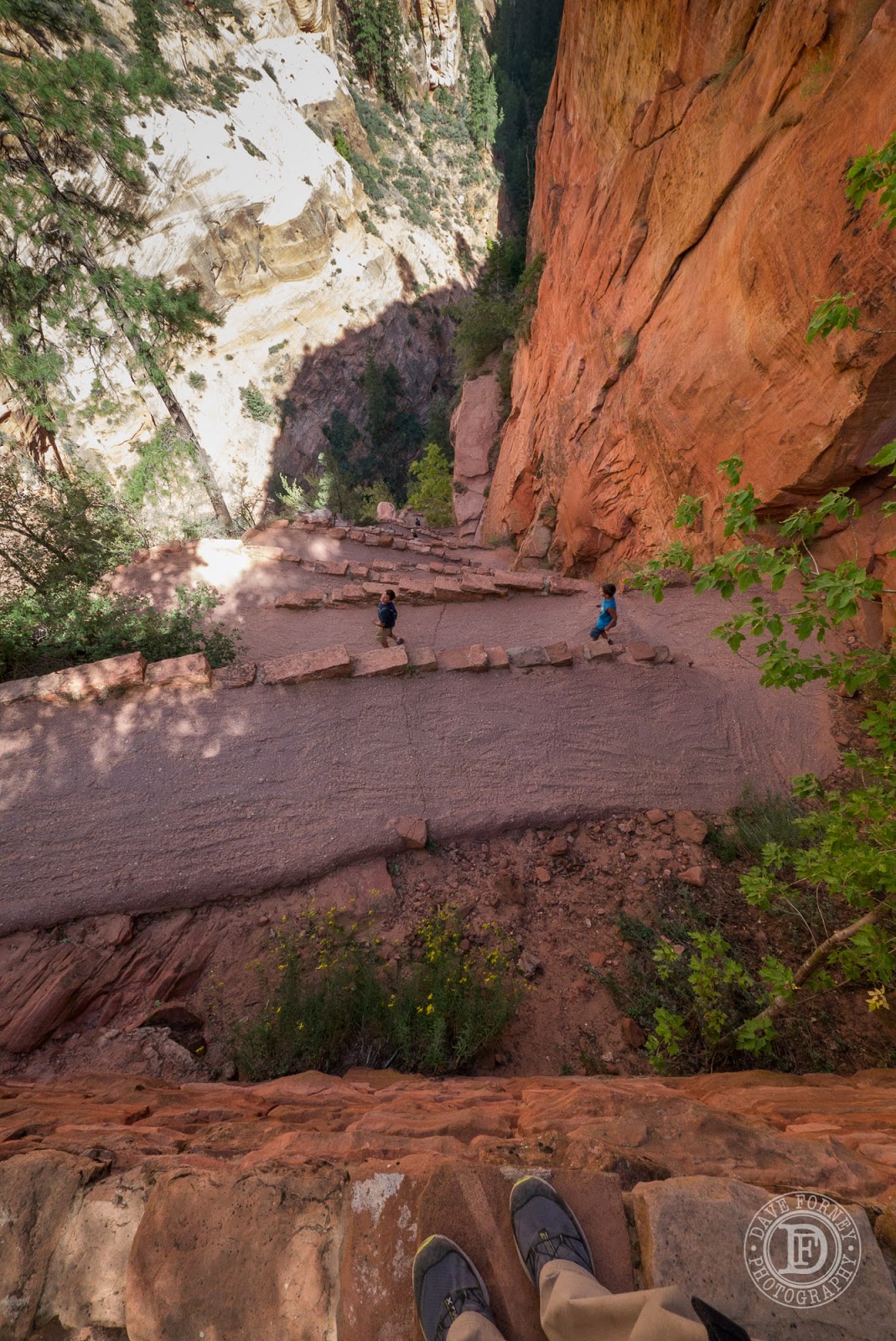 The first two thirds of the trail is a lot of fun, and pretty amazing, but frankly, it's rather benign--meaning, you'd have to not be paying attention to fall off and die (unlike the upper portion).  I mean, it's paved or cemented (with natural colors that blend into the surroundings) and wide enough to comfortably have several people walk side-by-side, or pass each other, even if it does drop off hundreds of feet sharply on one side or the other.   But then you eventually get to the point where you have to make the decision to either start out on the fin itself (below), or sit down and enjoy the "safe" view.  This is where many, or most, of the people stop and simply enjoy the view.  Even from here you can see up and down the canyon in both directions and the views are astounding!  And from here on out, things get a lot more hairy!  The trail winds it's way up to the very tippy top of that fin (below).  It might not look like much in this picture, but trust me, there are many places where one wrong foot, or one little stumble would result in certain death.  That's part of what makes it so exciting--it's an unparalleled view, that's available only to those who make the effort.   By the way, if you look closely in the picture below, you can see little people walking along the section of the fin where it dips.  That gives you a sense of the scale. 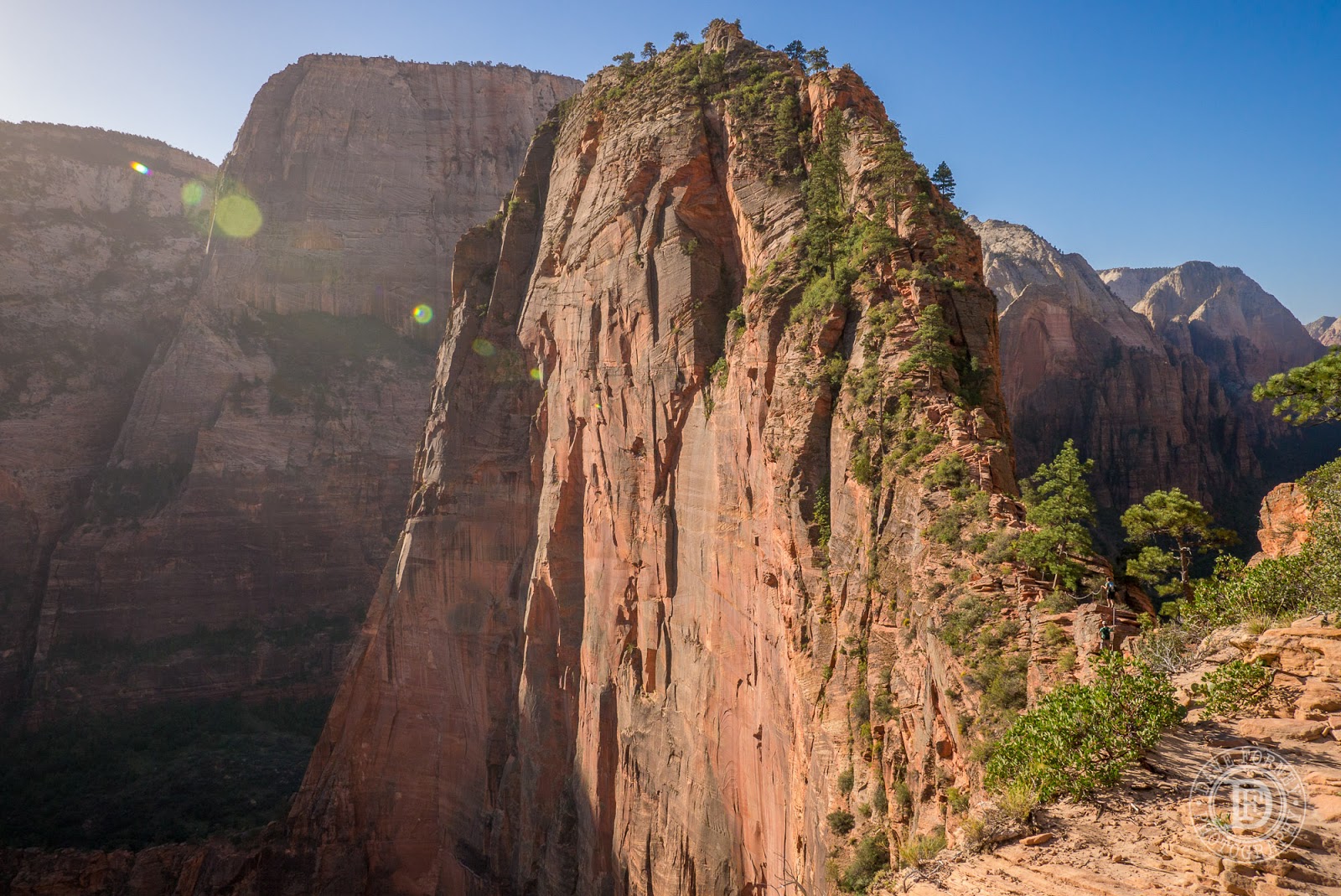 In many places the trail is barely three feet wide, and drops absolutely vertically on either or both sides--up to about 1,500' on one side and about 800' on the other.  In some places they have a chain anchored to the wall to hang on to, but it's not like a safety chain that will catch you.  It's always on the wrong side for that.  It's up to YOU to hang on to IT!  If you slip, or let go, that's all she wrote!  There were some places where you had to transverse a short lateral slope that was quite steep, and ended in a cliff, with gritty sand on the smooth rock.  Frankly, those parts were a lot more unnerving for me that the stretches like the one in the picture below, where at least your footing was sure if you kept your wits about you. 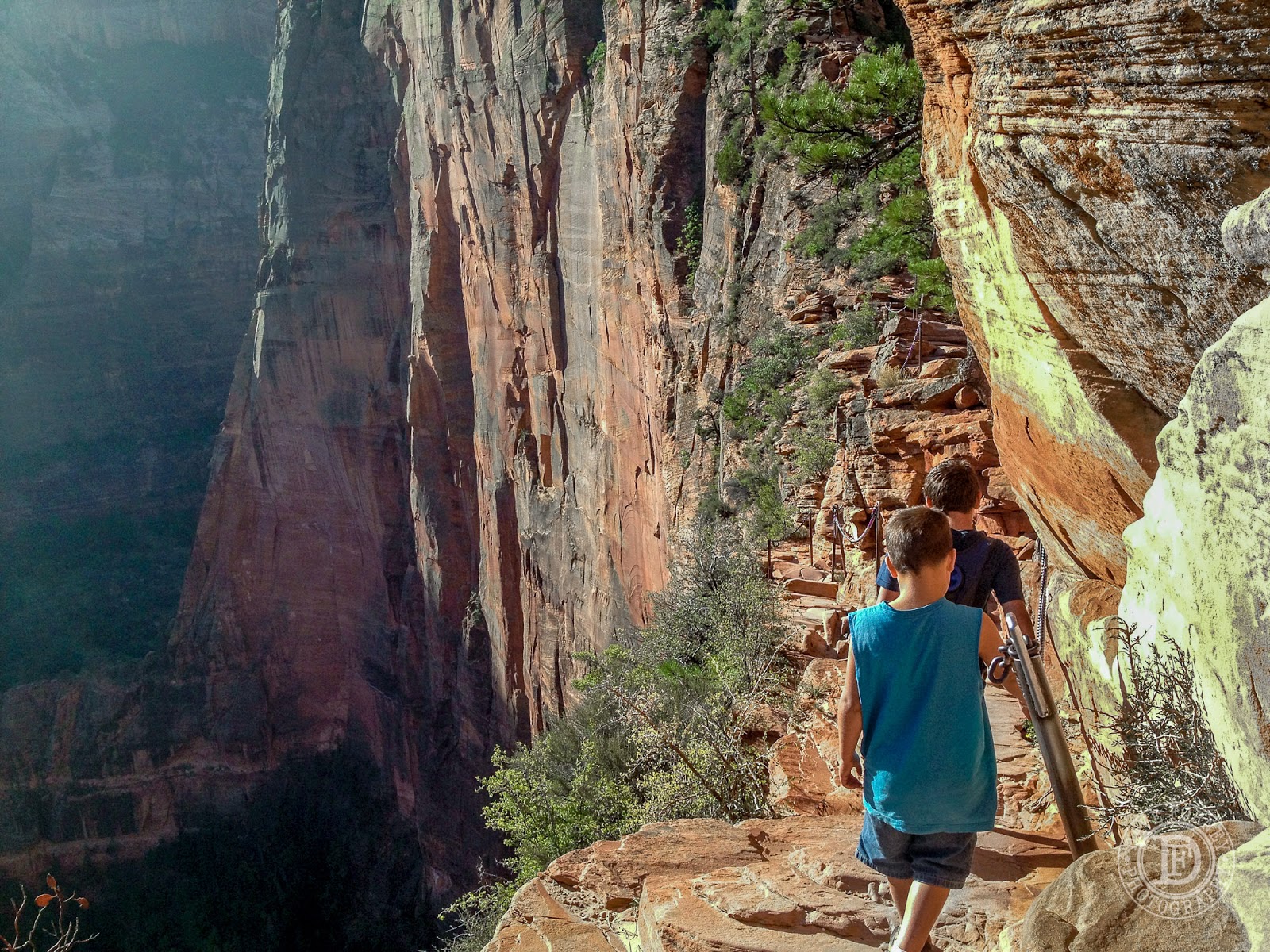 Frankly, the pictures here just don't capture it really well.  Despite what you or my wife might think, I was in fact keeping a close eye on my two boys, making sure that they were being safe and deliberate in each and every step.  So the scariest places where it would have made best photos--well I didn't get photos of that b/c I was helping them navigate.  There are a number of places where it's too tight to pass, so it becomes single file in those places.  Fortunately we had risen early and were among the first to ascend that morning, so there wasn't much pressure from behind, and no one coming back down yet as we worked our way up.  It was just a lot of fun! 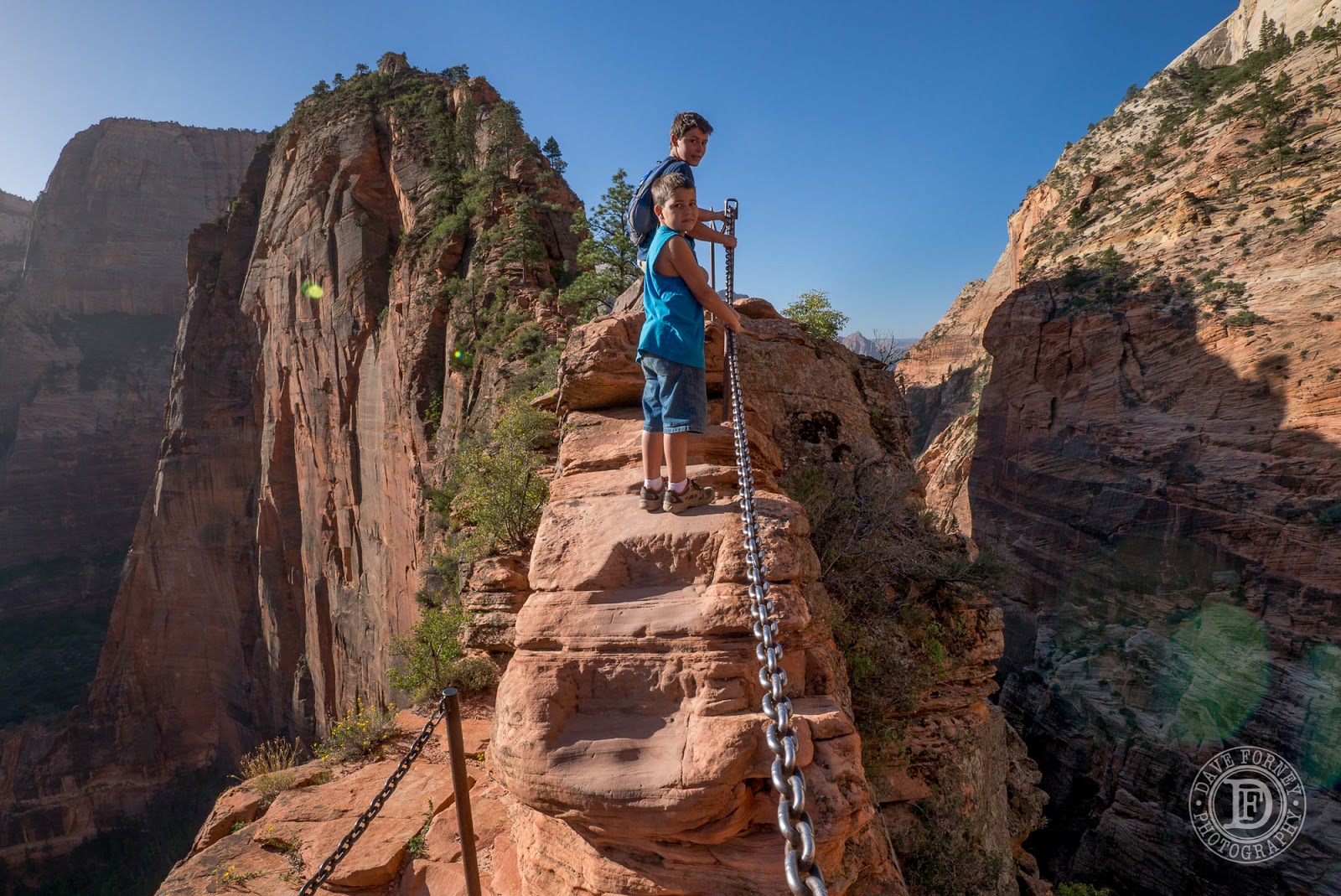 At the top, the views are unbelievable!  The sky was so deep and blue and clear, and the sun was rising and painting the rocks a golden yellow in all directions.  Amazing!  It was hard to take it all in.  I love being on the top of mountains, and wish I had more chances to climb.  Some day I'd like to climb the Rwenzori Mountains along the border of Uganda and Congo.  They are the highest mountain chain in Africa, and have snow and glaciers year-around, and some crazy fauna and epic vistas (if the clouds part, which doesn't happen often).  But you're not allowed to climb them without a guide and that costs money that we don't have right now.  So that will have to wait till who knows when. 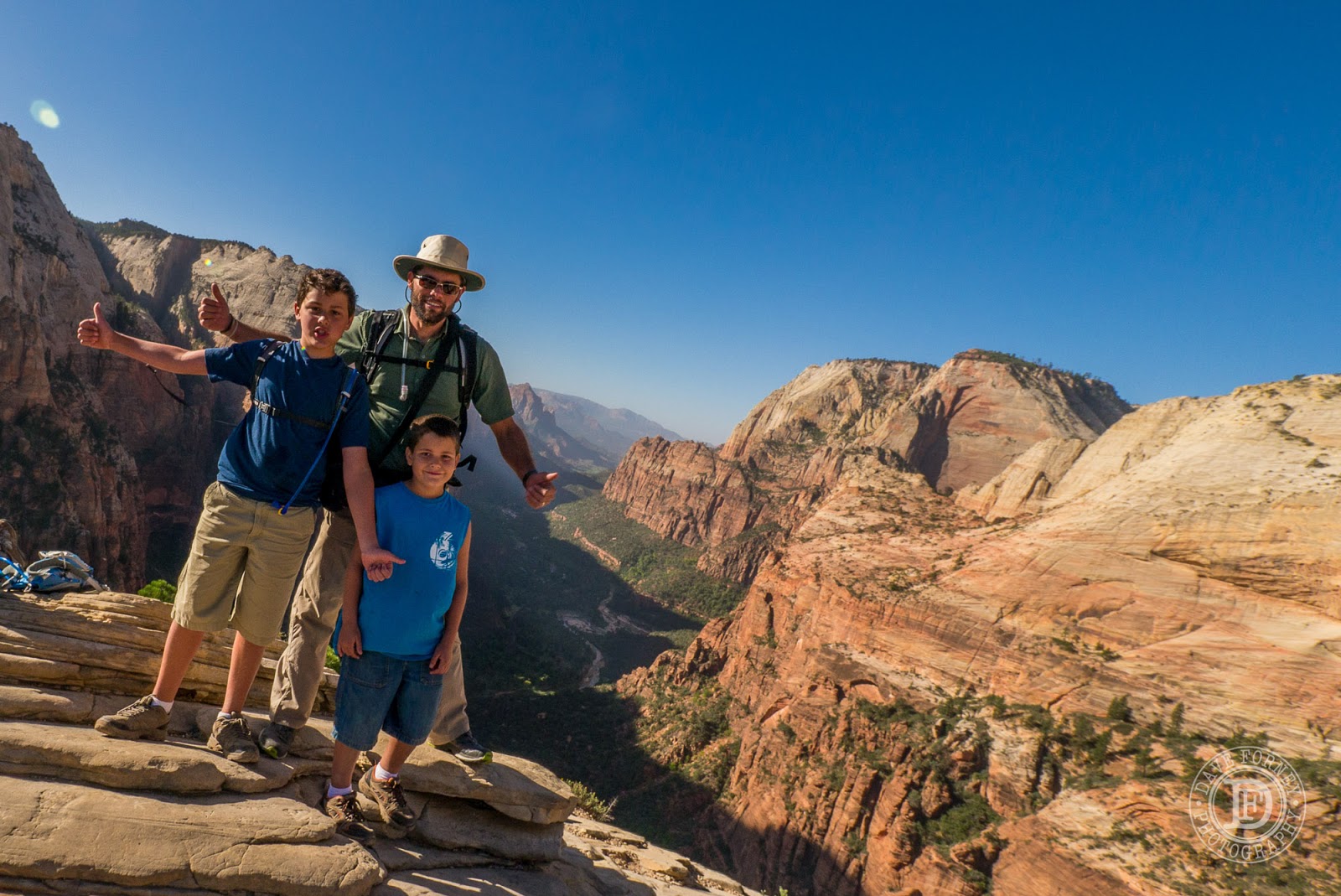 Anyway, my boys wanted to peer off the edge, but it's literally 1,500 feet straight down.  So I thought it best that they not stand directly on the edge.  Besides, if I didn't fall to my death on my own, my wife might have killed me if she'd have seen a picture of that.  So we deleted those pictures and... ha!  Just kidding.  So what we did was we laid down and just looked over the edge so we could see straight down 1,500 feet and stay perfectly safe in the process.  See, I am responsible!  It was fun to watch the little tour buses way down below, and the people down there looking up. 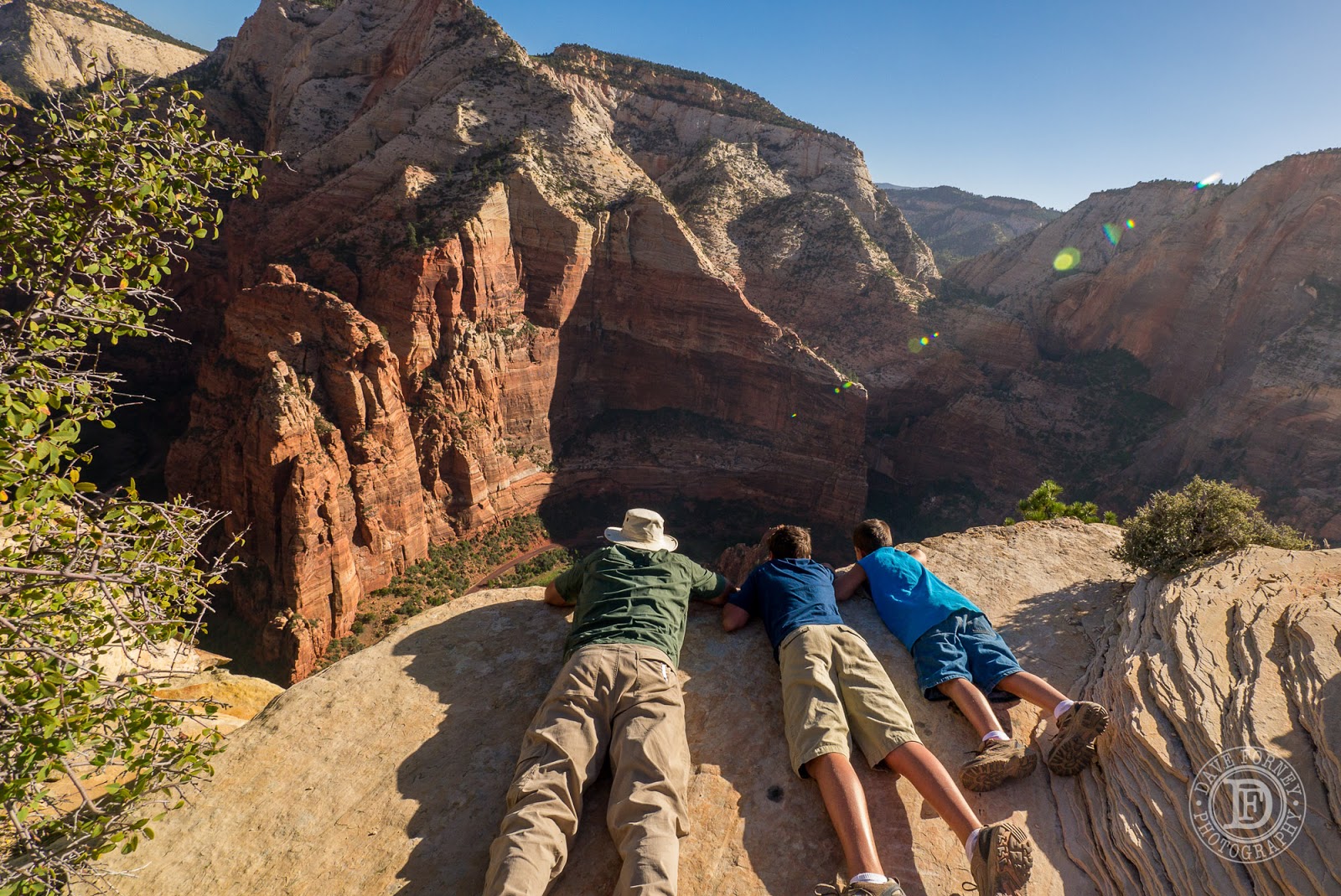 Here's a view looking one way down the canyon... 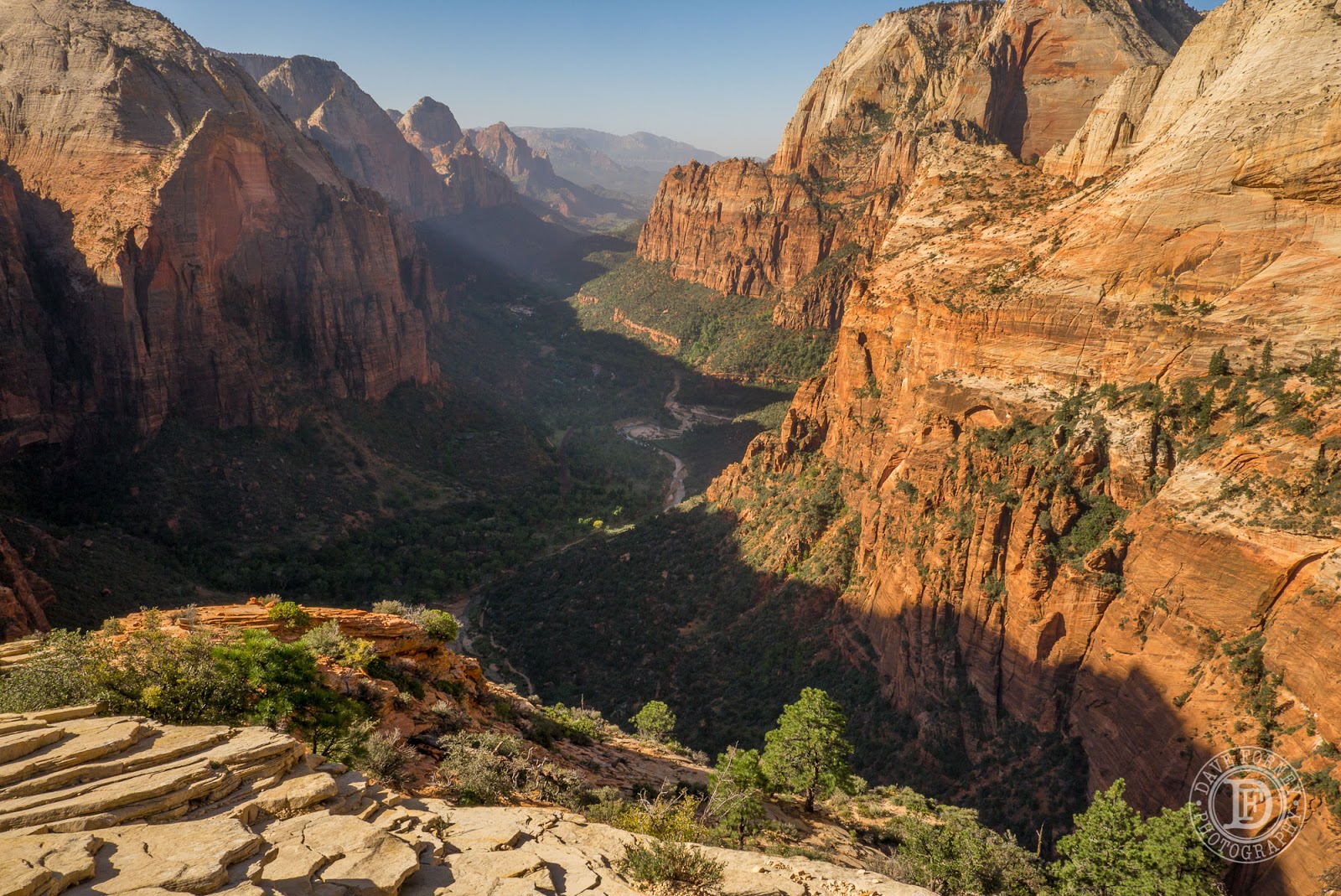 And here's a view looking the other way. 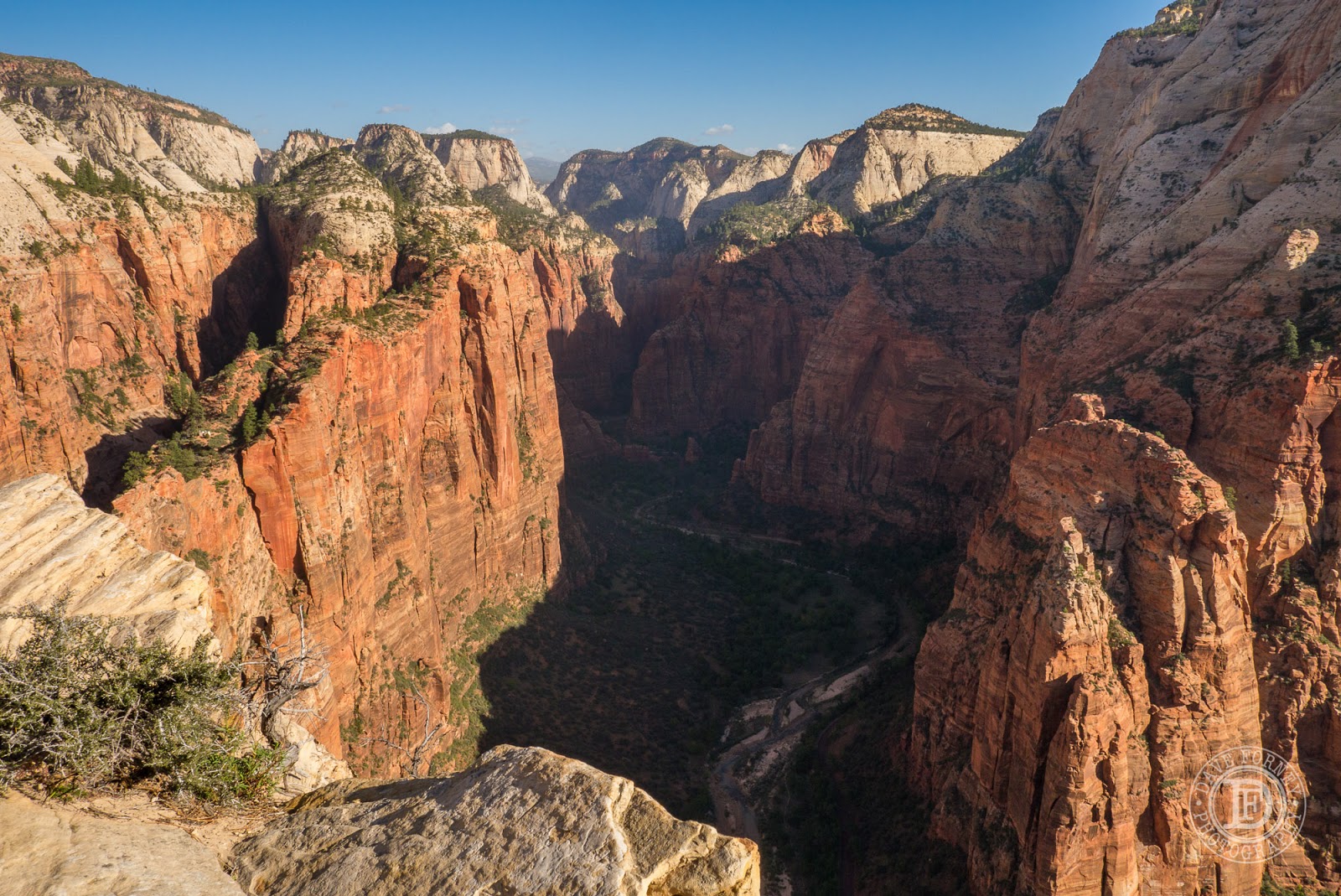 Well, after an hour or so on top we started making our way back down.  Sometimes going down can be worse than going up, but again my boys did great!  I don't know how many people commented on the way down about my son, Hudson, who was 9 years old at the time.  I think he made a lot of people feel bad--him with his big grin on his face, tackling the trail confidently but carefully, and many of them content to look from a distance at those last 500 meters of the fin.  Trust me, it wasn't for the faint of heart, or those afraid of heights.  It would not be a good place to have your knees start knocking together, or to freeze up, especially when there's so many people trying to go both directions, and several places where it's only single-file.  But Britton an Hudson were both rock stars. 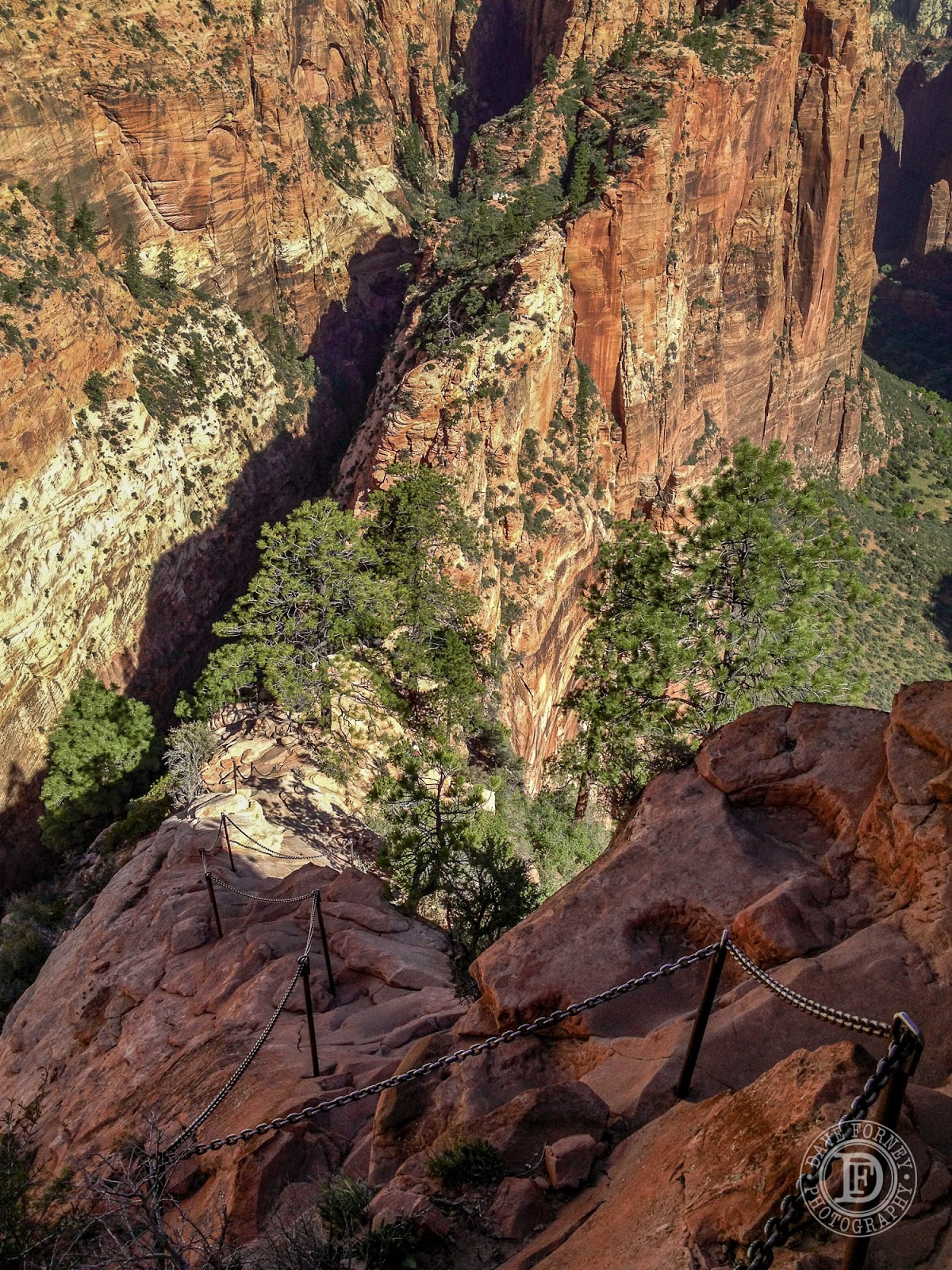 It was a great experience for us to share together, and one that I'm sure we'll never forget!  Maybe someday my boys will be back with their own children, and tell them about how they first hiked this trail with Grandpa Dave way back in 2013.  Sheesh!  Now I feel old just thinking about it!! 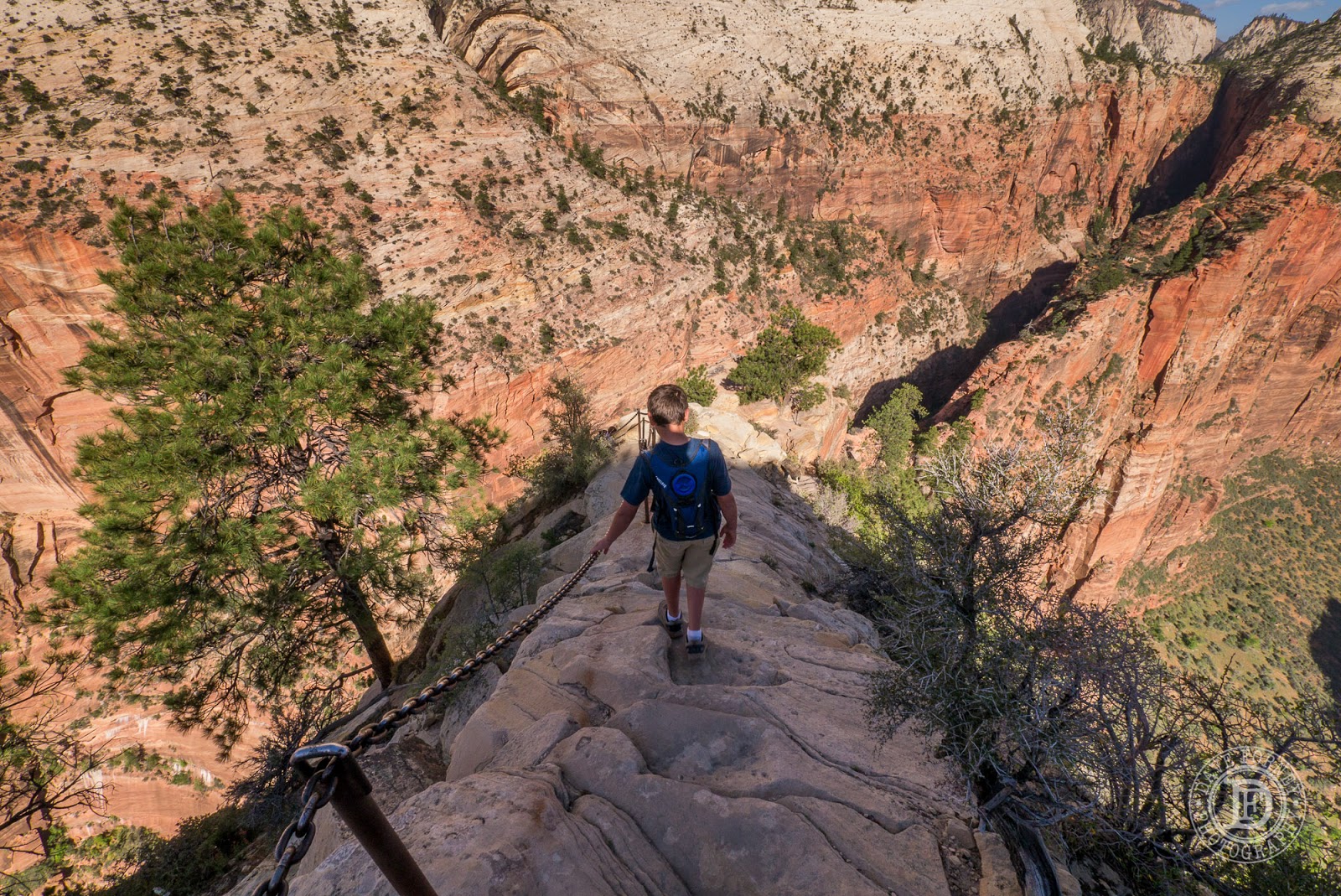 On the way down we stopped to enjoy a picnic lunch along this bend in the trail.  Not a bad spot to eat lunch eh? 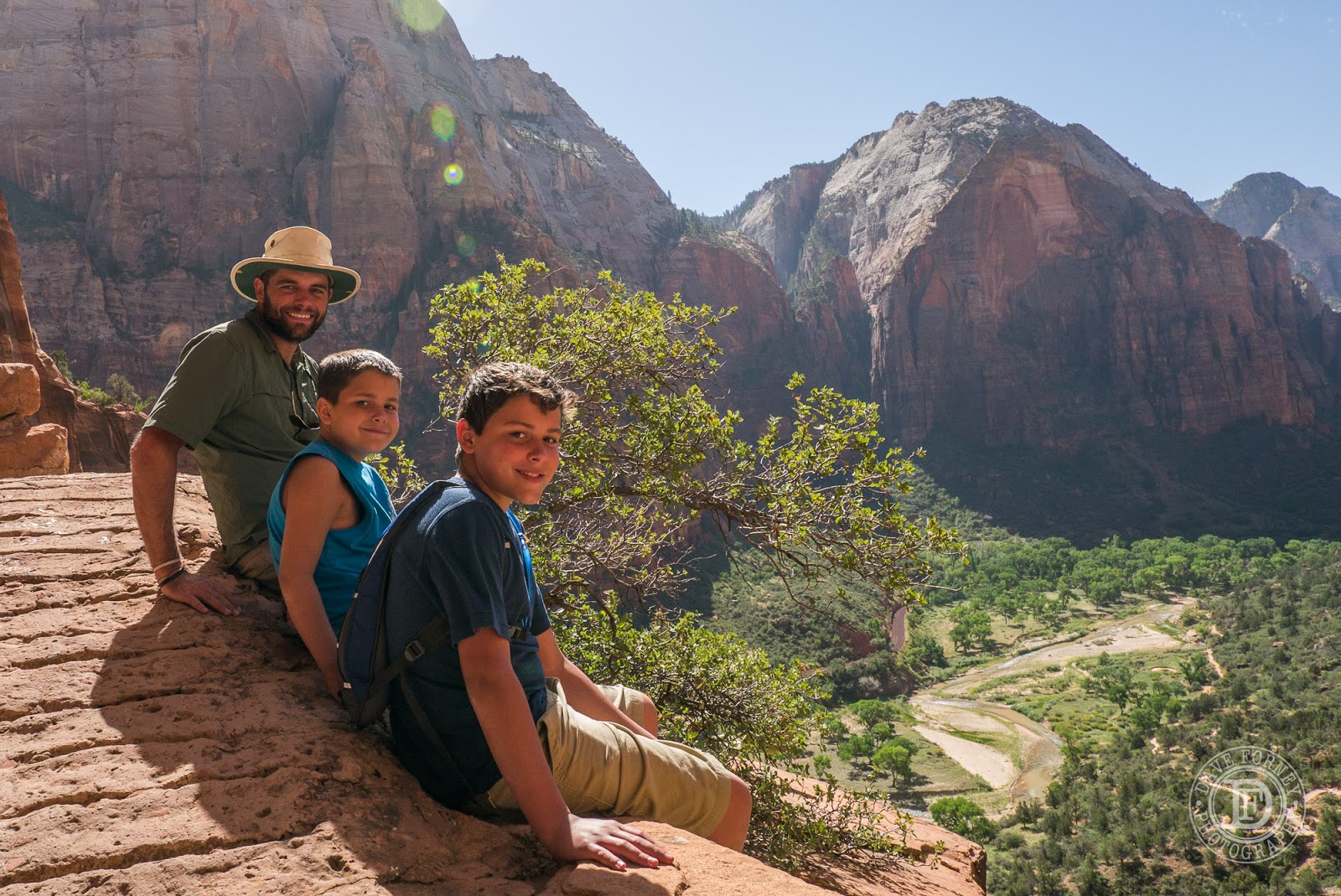 I know you have some really tough periods - but you also know how to squeeze the joy out of the good days like nobody's business. This post regarding Dave and the boys' ascent was just great to read.

Dave, if you really love mountains, and if you do have a bit of time to be on your pc whilst waiting for your licence admin, maybe you'll be interested to read about my recent climbing in the Alps. First installment is this: http://alijrosier.blogspot.ch/2014/08/monte-rosa-traverse-day-0.html... and I've written 4 posts so far. I'm writing day by day, with far more detail than I thought, but it helps to process the very hard scary moments to write it down like this!

All the best to you all
Ali

I was without a computer for awhile, and am just now catching up on your blog. I have been reading it for probably 3-4 years. I want to thank you for this post; I am petrified of heights, and could never make that hike, even if I could afford to travel. Your descriptive writing, and gorgeous photography made me feel as if I was right there, holding my breath on the dangerous parts, enjoying the view. I don't often comment on blogs, but yours is my favorite, and this particular post was so real, like I was right there too. You, Joy, the children, and your mission work will be in my prayers.