We're right in the middle of the dry, hot, dusty season right now.  It started in late December and I'm told it could go through February or March.   We've had one or two rains in the past few months here in Kampala, but up in Karamoja there's places that haven't had a drop since mid-December! 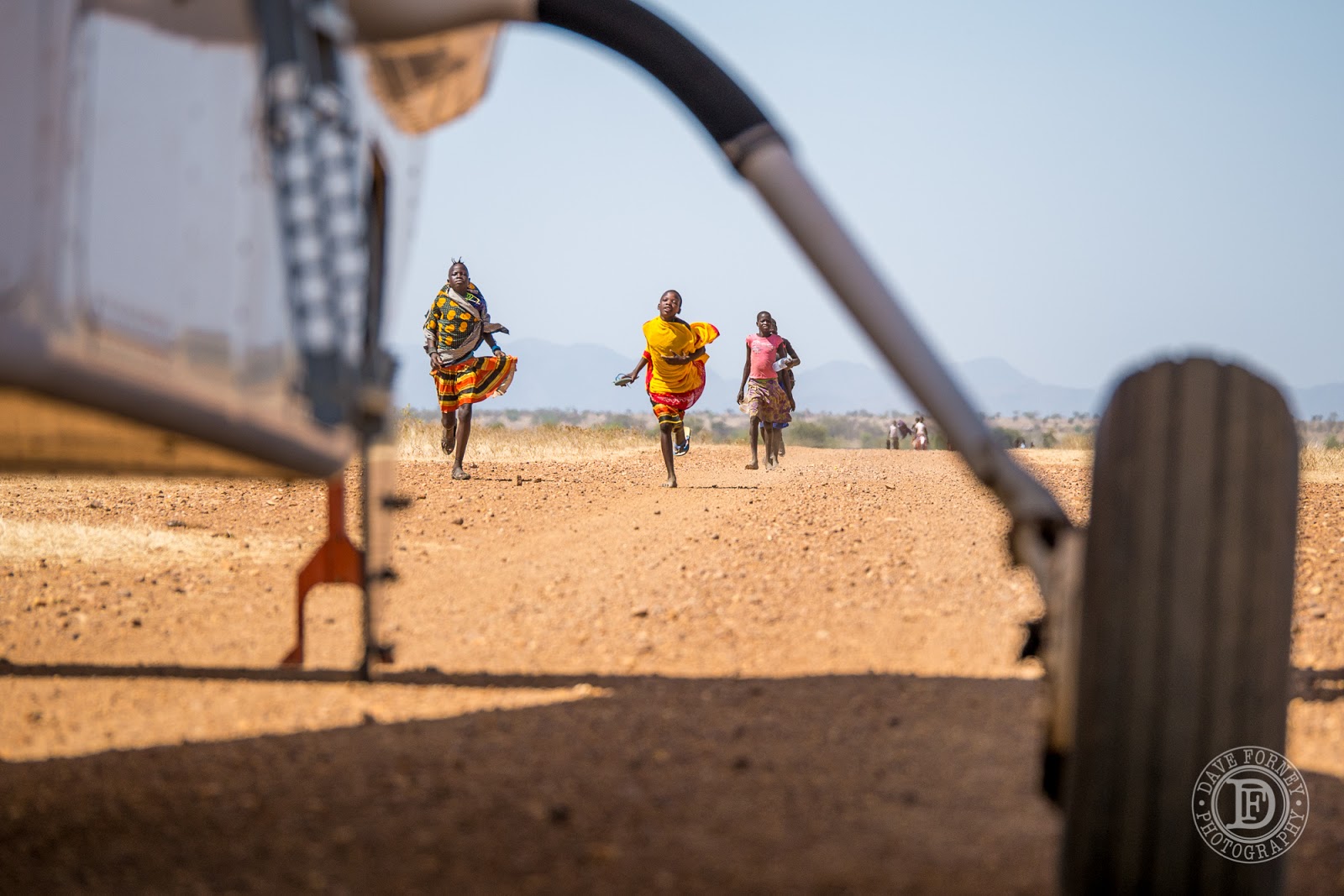 Our red dirt strips used to contrast nicely with the bright green grasses that surrounded them.   Now everything is a thousand shades of brown, orange, and red.  Sometimes it even takes on a monochrome look.

I find it strangely beautiful--not unlike the stark, surreal, but sometimes bleak beauty that surrounded us when we lived in a remote village above the arctic circle.  Only it's much hotter here!  The photo below is a typical Karamojang village in Northeastern Uganda.  If you look closely you can see a group of people right in the middle of the circle of huts staring up at the plane.  To see how this compares to the green lushness a few months ago, check out my November post:  Rainbows & Other Stuff. While I do find the parched, gritty, almost black & white look of the Karamoja region in the midst of dry season rather striking, I'm not sure I feel the same way about the overwhelming red dust in Kampala, where we live.  It's constantly covering everything.  You can clean stuff off and the next day it's covered in a thick film of the fine red powder again.  It gets in everywhere throughout the house.  There's no way to keep it out.  Some of the roads are paved in the city, but many of them are red murram (dirt) like the one in this picture.  After a few days without rain they turn to fine dust and the city is enveloped in a thick cloud of it.  After a rain, most of these tin roofs will shine bright as they reflect the sunlight.  Not much chance of that now.  The white and colorful stuff to the right side of the road are a bunch of goods being sold at a street market. 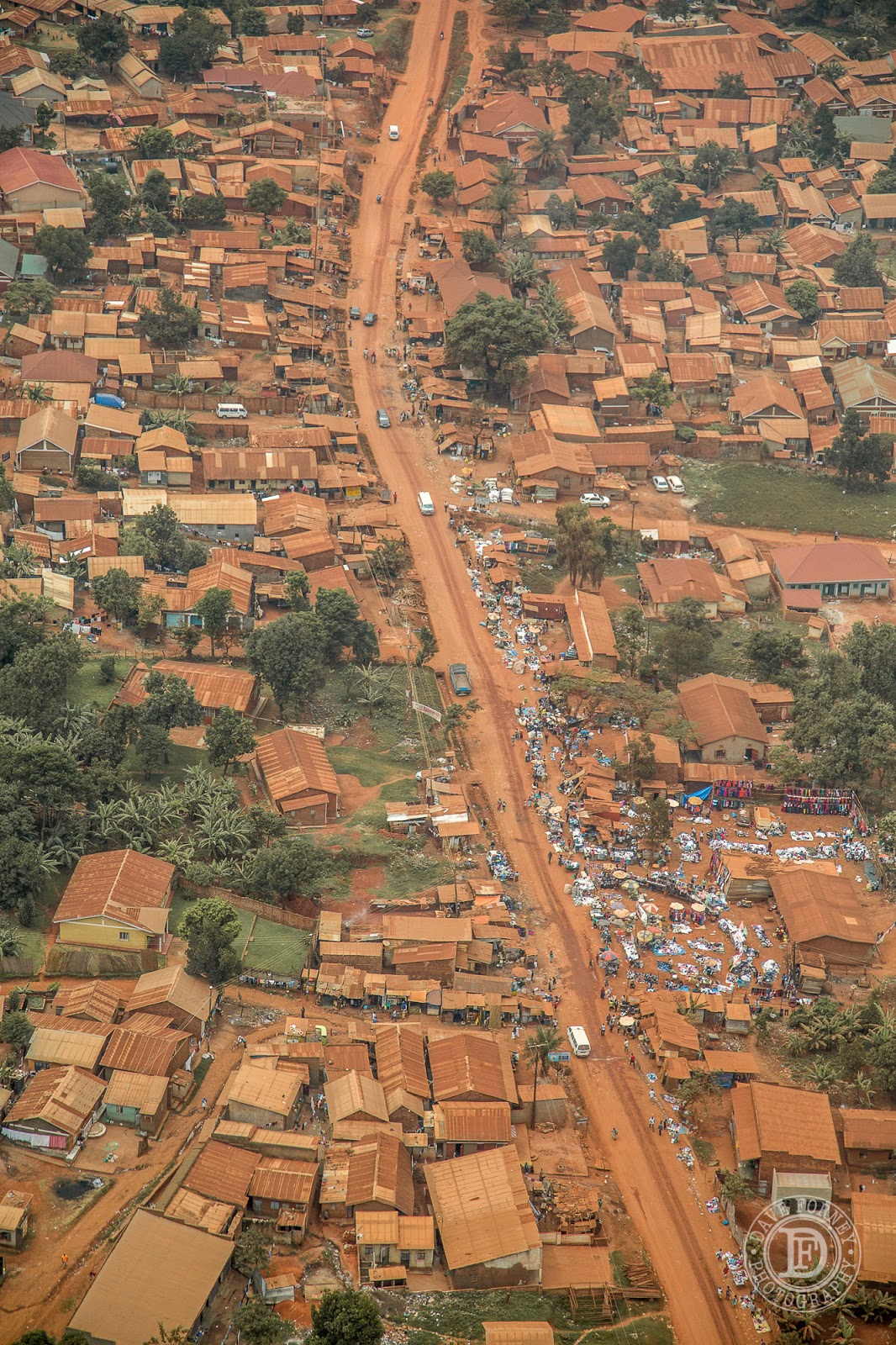 It does make for some nice sunrises and sunsets though.  This is the road to our little airfield in Kajjansi. The sun is just beginning to pop over the horizon when we arrive early in the morning.  The overloaded truck (a very common scene here) is carrying charcoal to be sold for cooking fires. 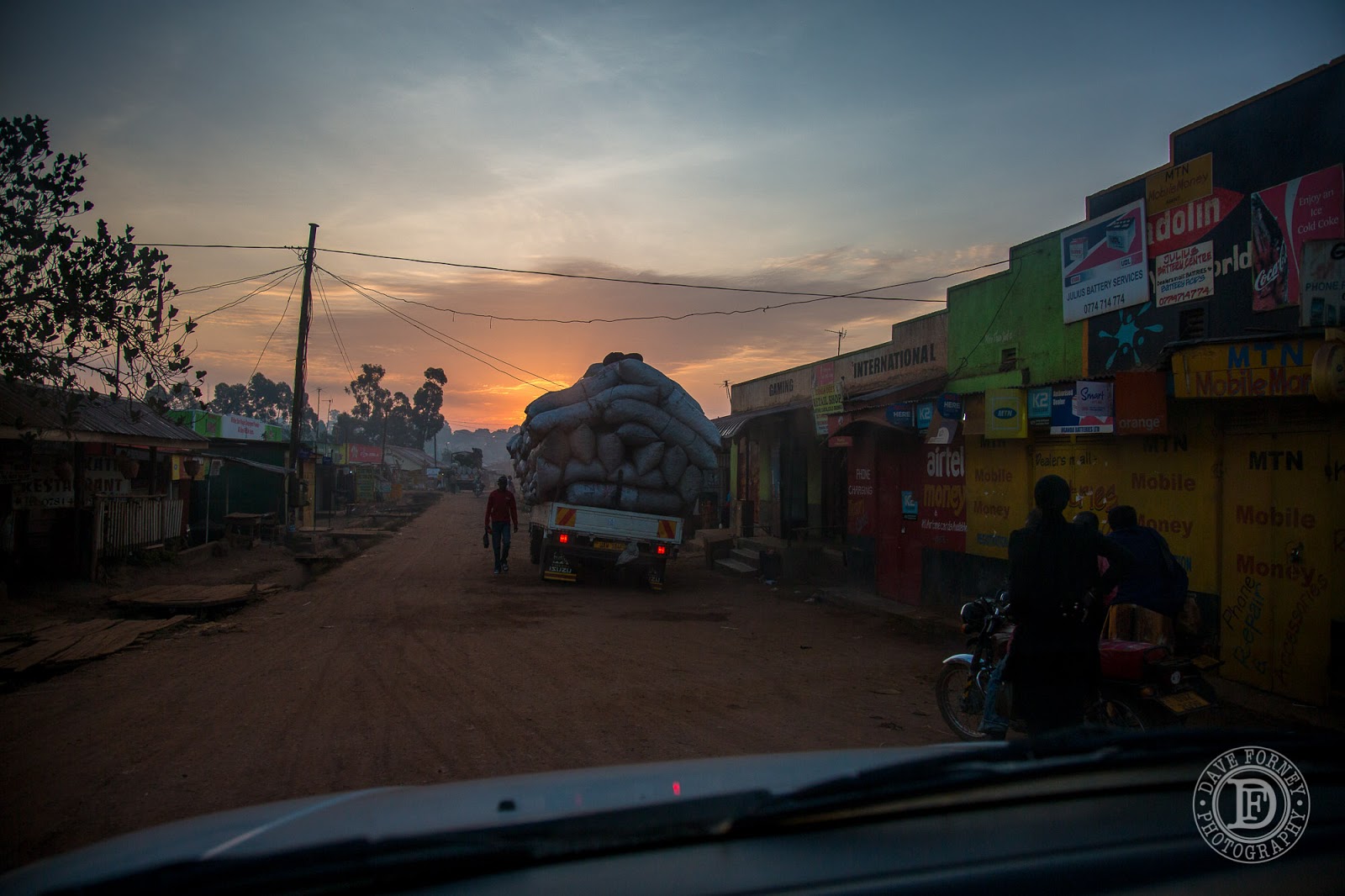 Yep, that's the red African sun!  It's beautiful shining through the dust in the sky. 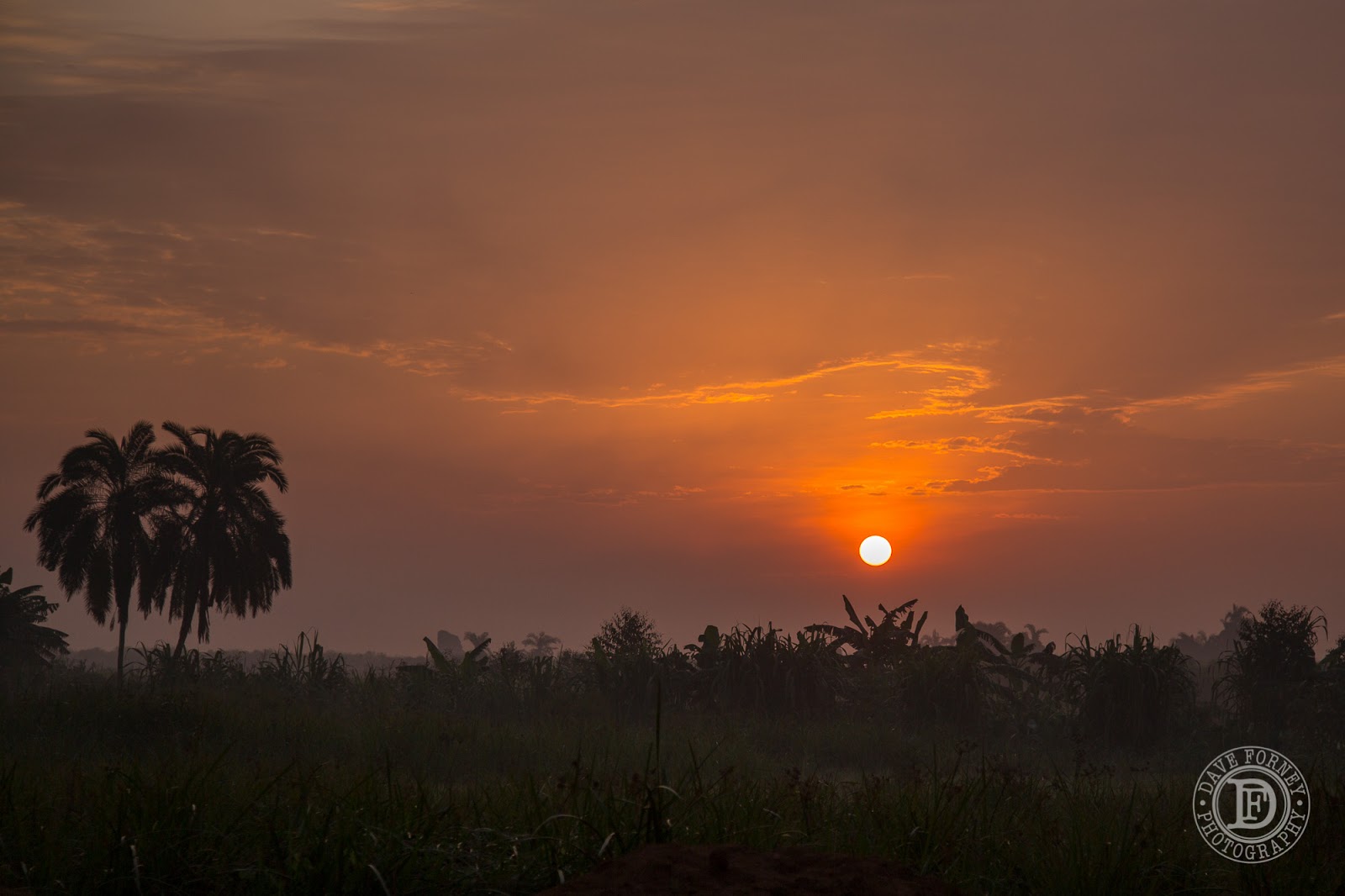 However flight visibility is not nearly as beautiful in the dust and smoke.  This has been a very typical scene over the past two months or so.  One good thing is that we don't have to battle too many storms this time of year, which is good since we can't see more than a few miles ahead much of the time.  If you want to see what the weather and visibility was like a few months back, check out this post: Views From My Office Window. 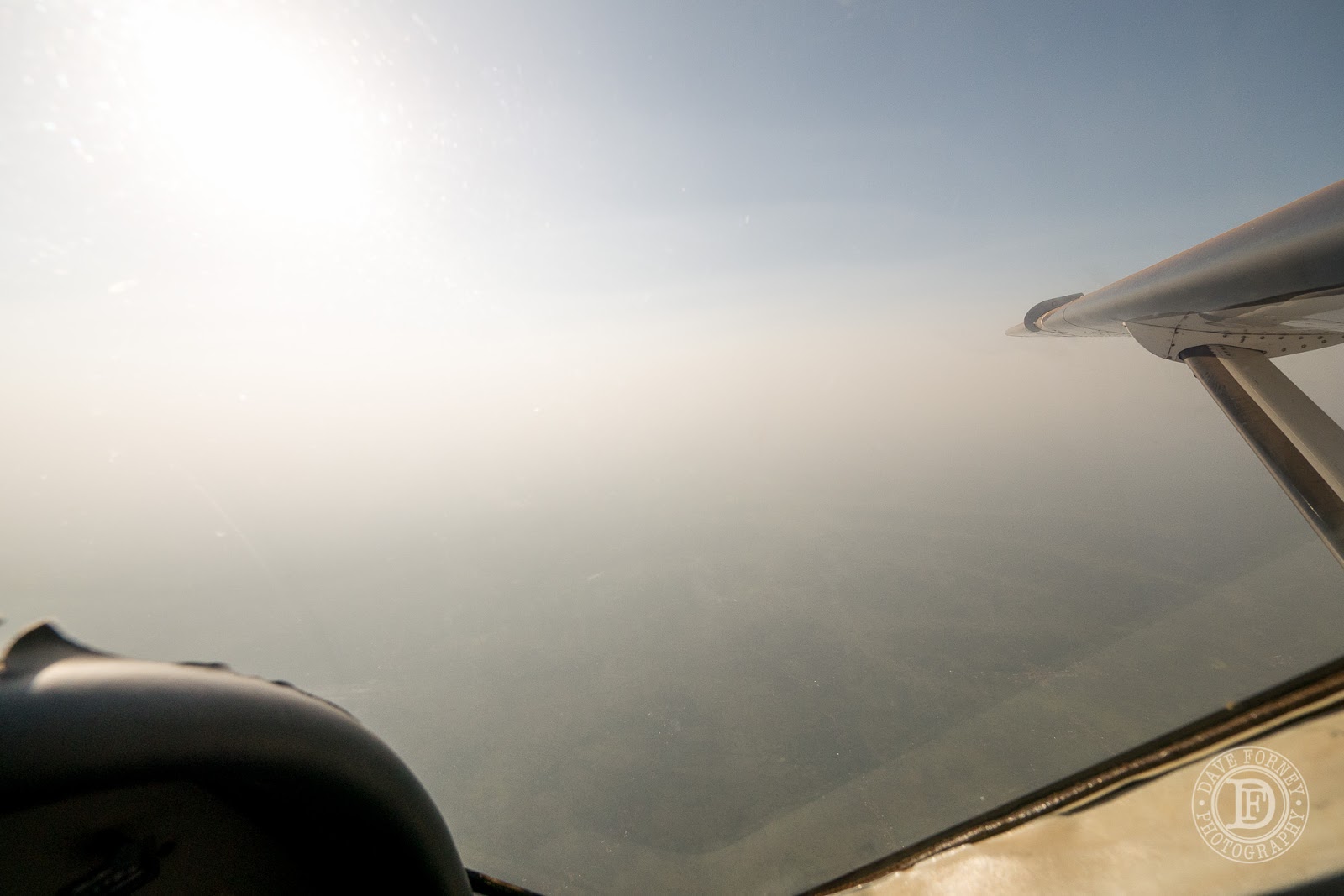 Speaking of dry season--we've been battling relentless water issues at our house ever since we moved here last March.  There were a number of times when we had no water for a week or more at a time.  And the rest of the time we'd just have a trickle off and on--more off than on.  For a family of eight that's not much fun.  It would frankly be better to have an outhouse and a river nearby in times like that, than to live in a house made for running water, but with none to be found.  With the onset of dry season the water situation went from bad to worse.  Our header tank is just too high for the trickle of water from the city to fill it by gravity--which I guess was the idea.  It wasn't working!

We finally had enough of it and I decided we had to do something about it.  It took me a few days to round up all the supplies around town.  Right when I was ready to begin installing the new system (ground tanks for a reservoir, pump with electrical float switches, all the pipes, connectors, fittings, wire, etc.) three awesome guys with Kids Around the World came to visit and offered to help.  They had just finished up a project here in Uganda and had two days to kick it before heading back to the U.S.  Fortunately this was their idea of fun! 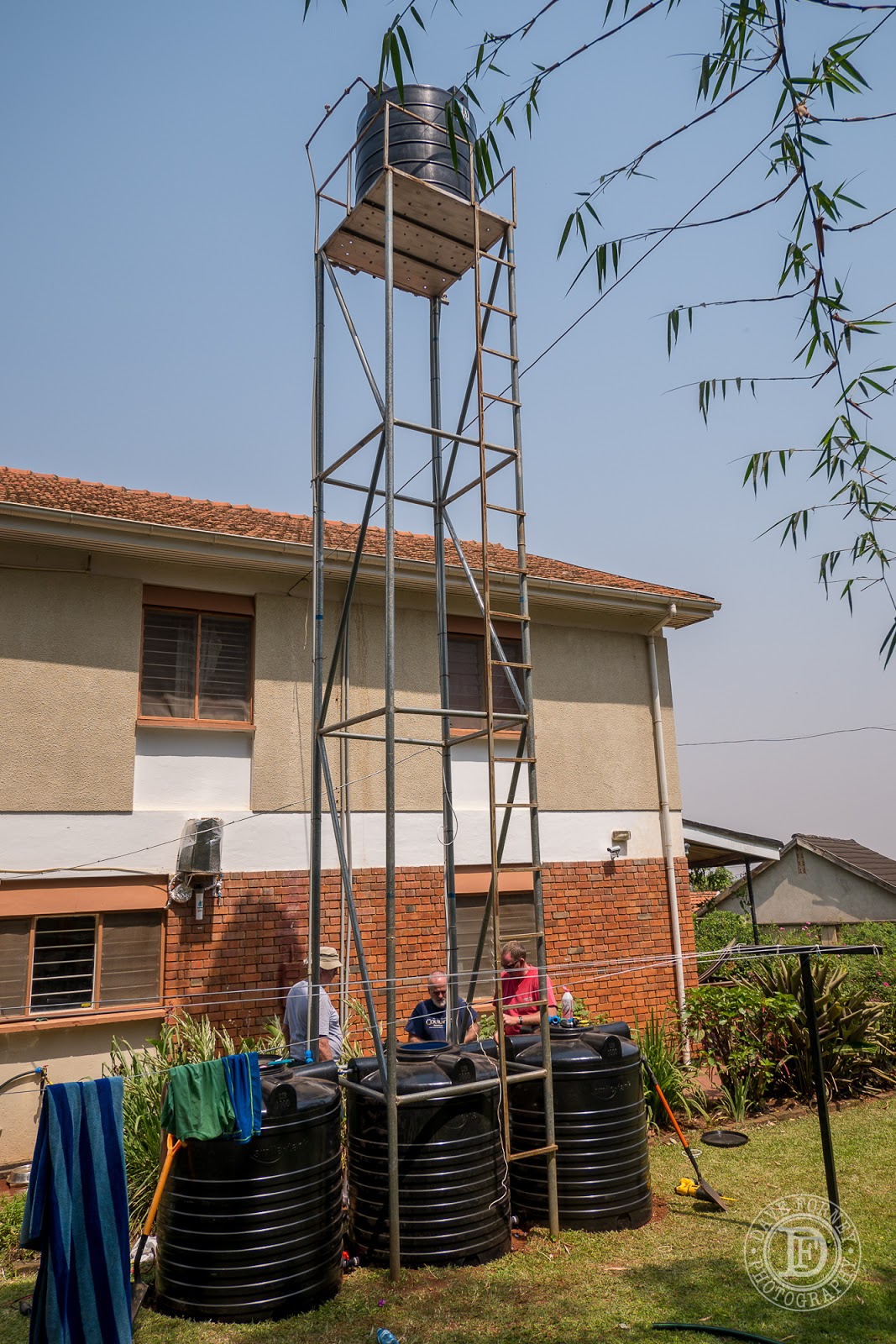 We were SO thankful for their help!!!  We got it all installed and running in a day and half, finishing up just a few hours before they had to catch their international flights home.  And we are SO enjoying having water now--which we've had every day since we installed this system!  Woohoo!  We'll never take water for granted again! :-) 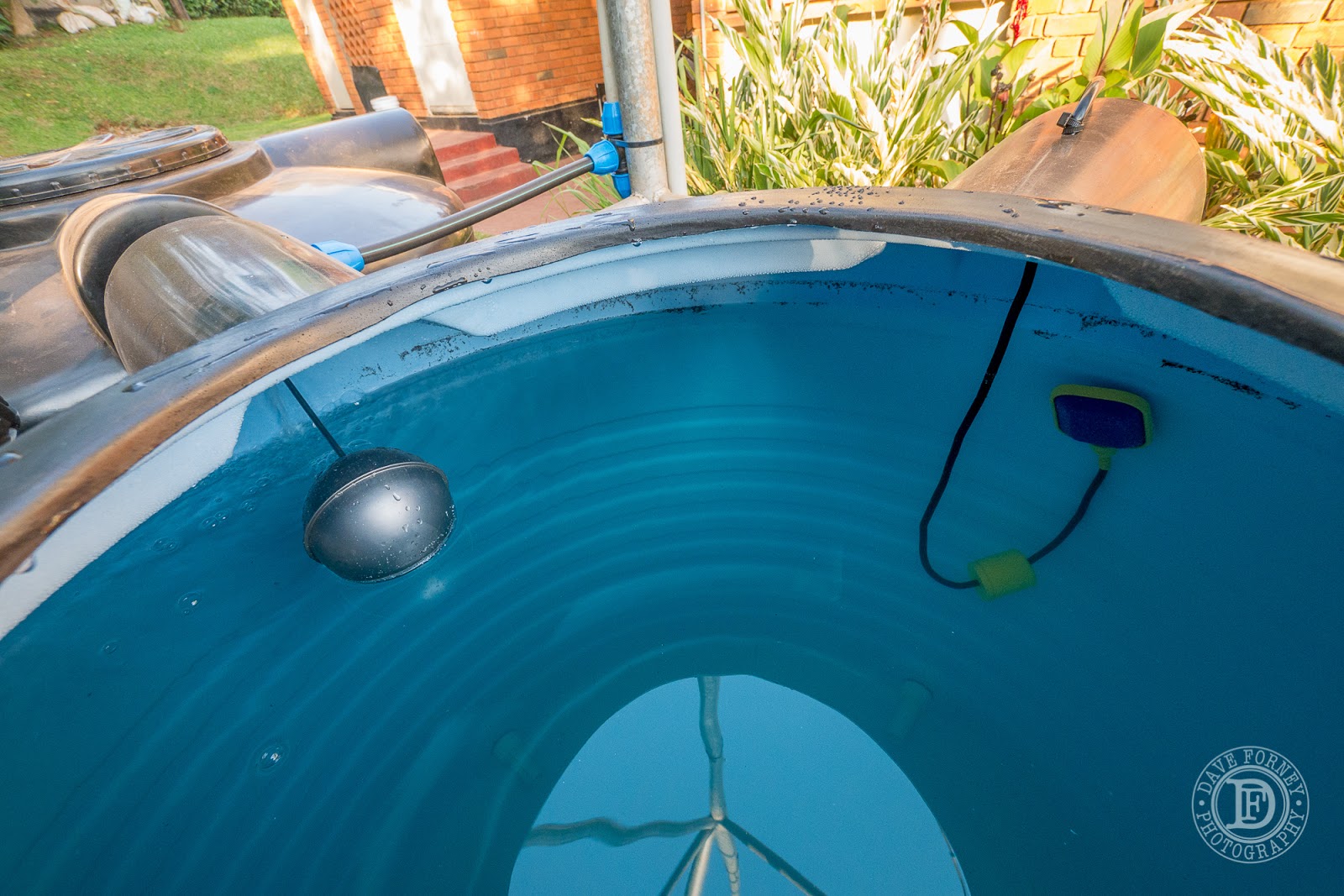 Fantastic update Dave! - and fascinating too.