You may remember just before Christmas I wrote about a medevac flight that I did for Lois, who runs a children's home up in Northern Uganda, and had fallen and broken her femur.   While we were in Kalongo waiting for the 4x4 ambulance to arrive with her, we got to take a little tour around the Dr. Ambrosoli Memorial Hospital there in Kalongo.  Here's a few pictures from that tour.  (Each one was taken with the permission of the people shown.) 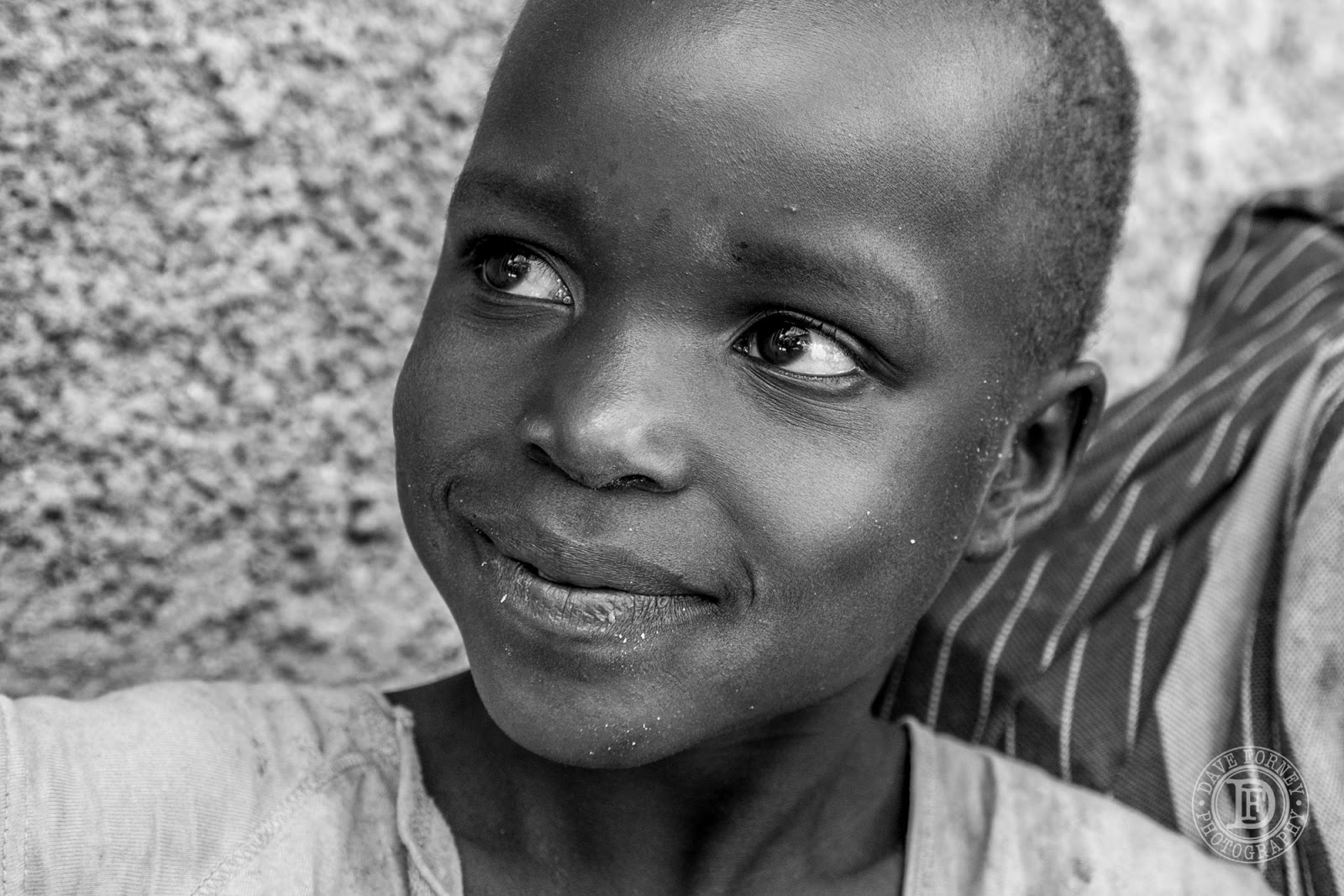 The "Kalongo Hospital" as many people refer to it, is one of our MAF customers, and they also help maintain and control the local dirt airstrip there in Kalongo. 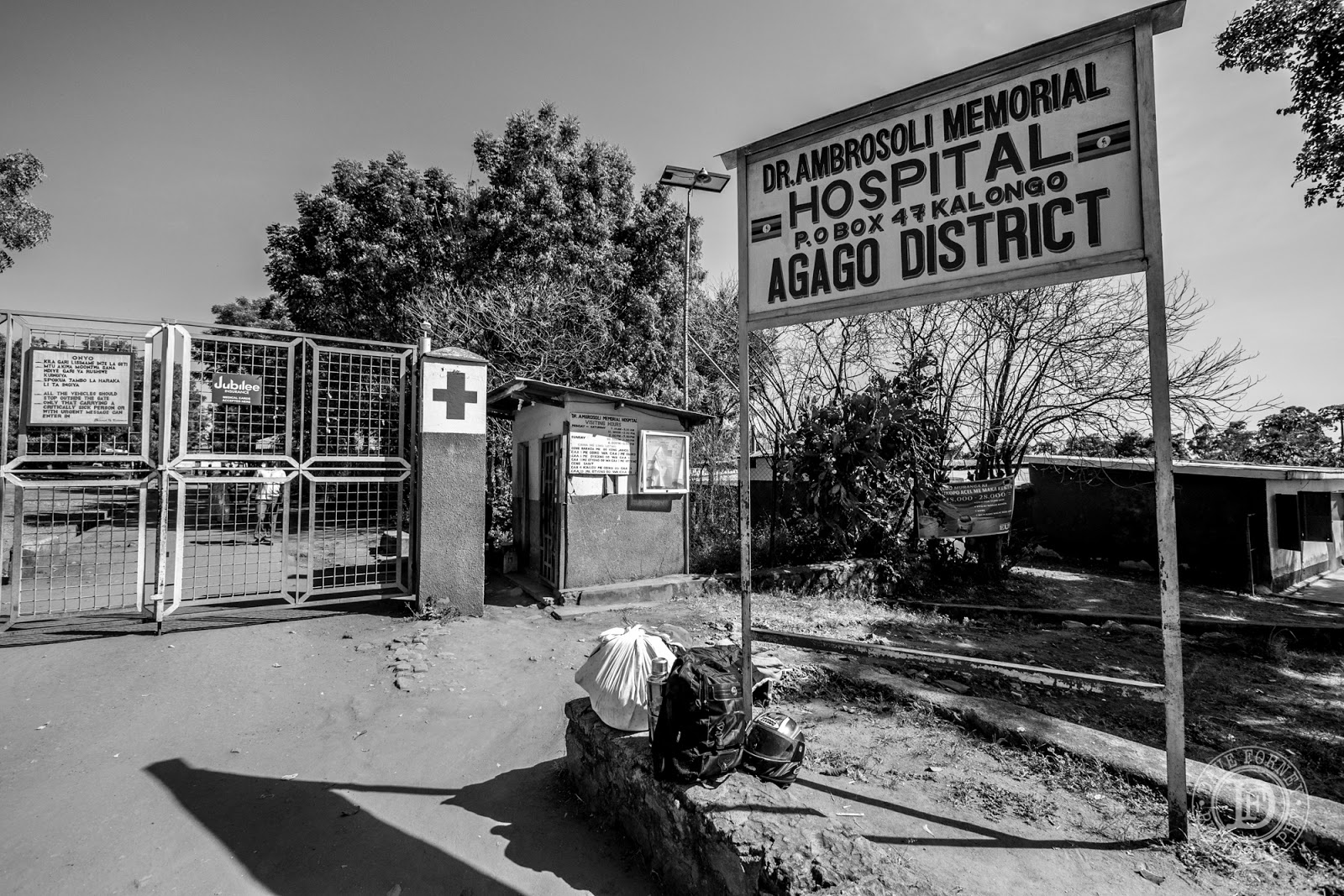 They serve many hundreds of people each and every day.  It was an absolute beehive of activity, with people everywhere waiting to be seen by a doctor or nurse, or waiting for family or loved ones that were being treated.  People come from all around, this being the only hospital in the region. 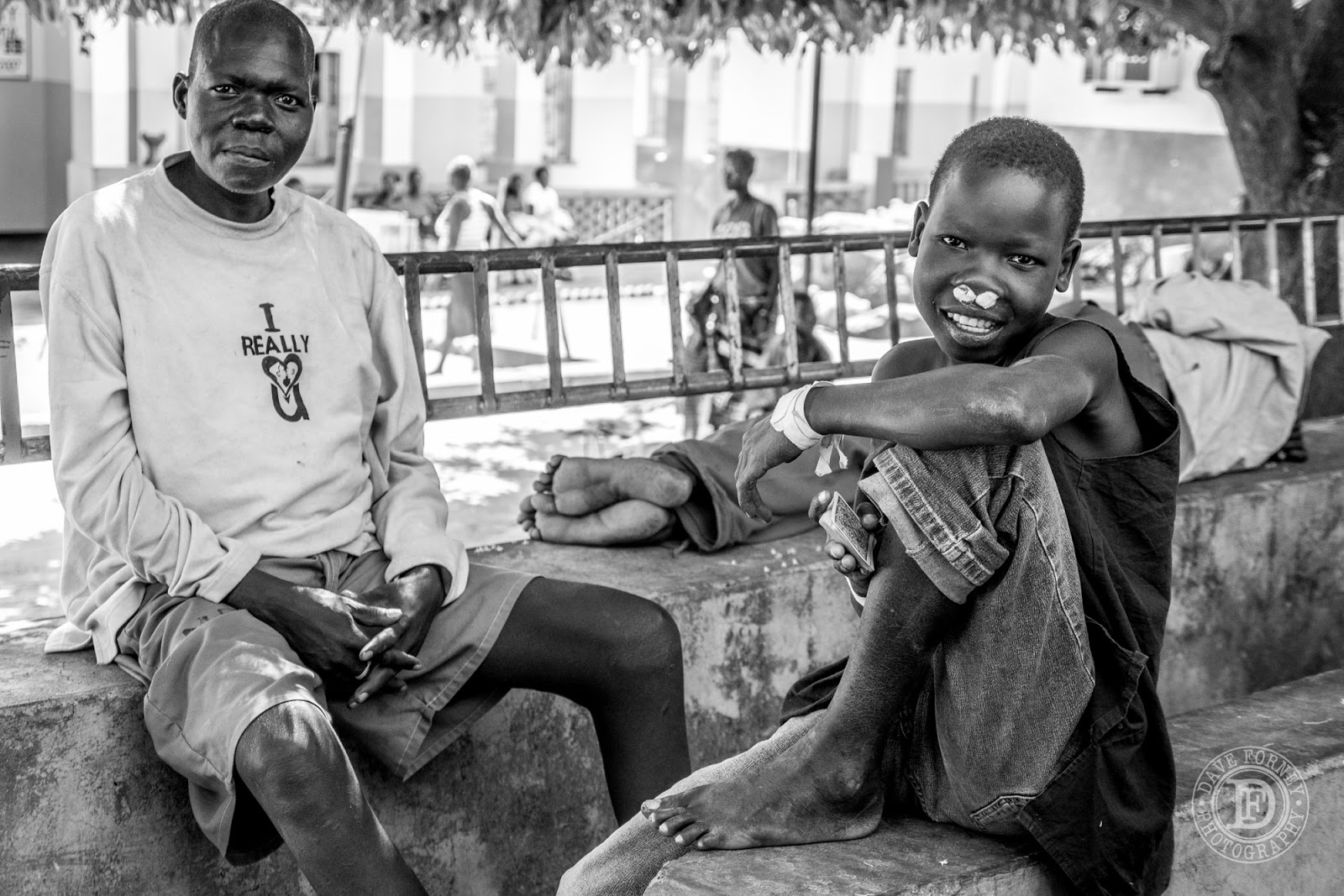 The waiting room prior to being seen and/or treated... 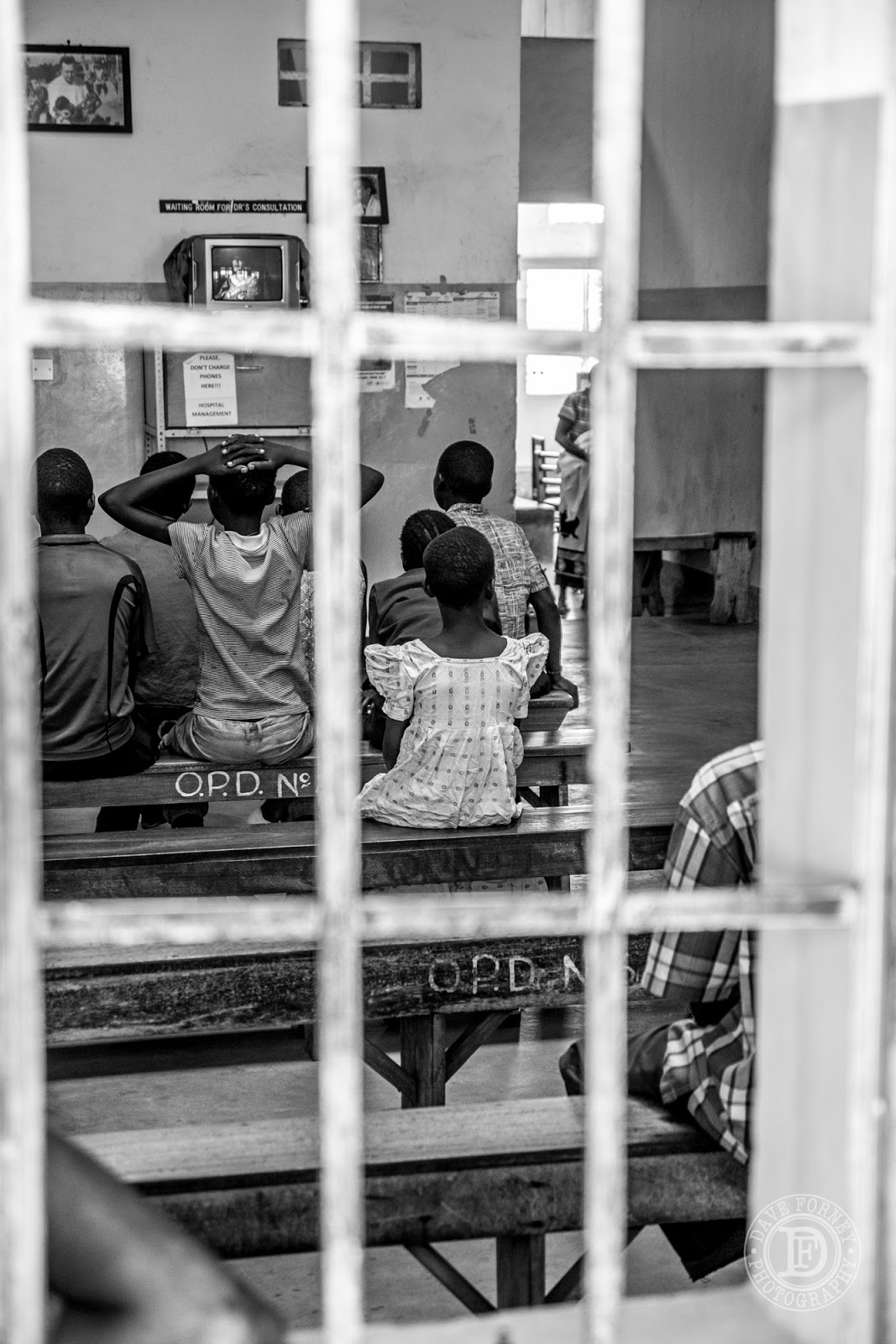 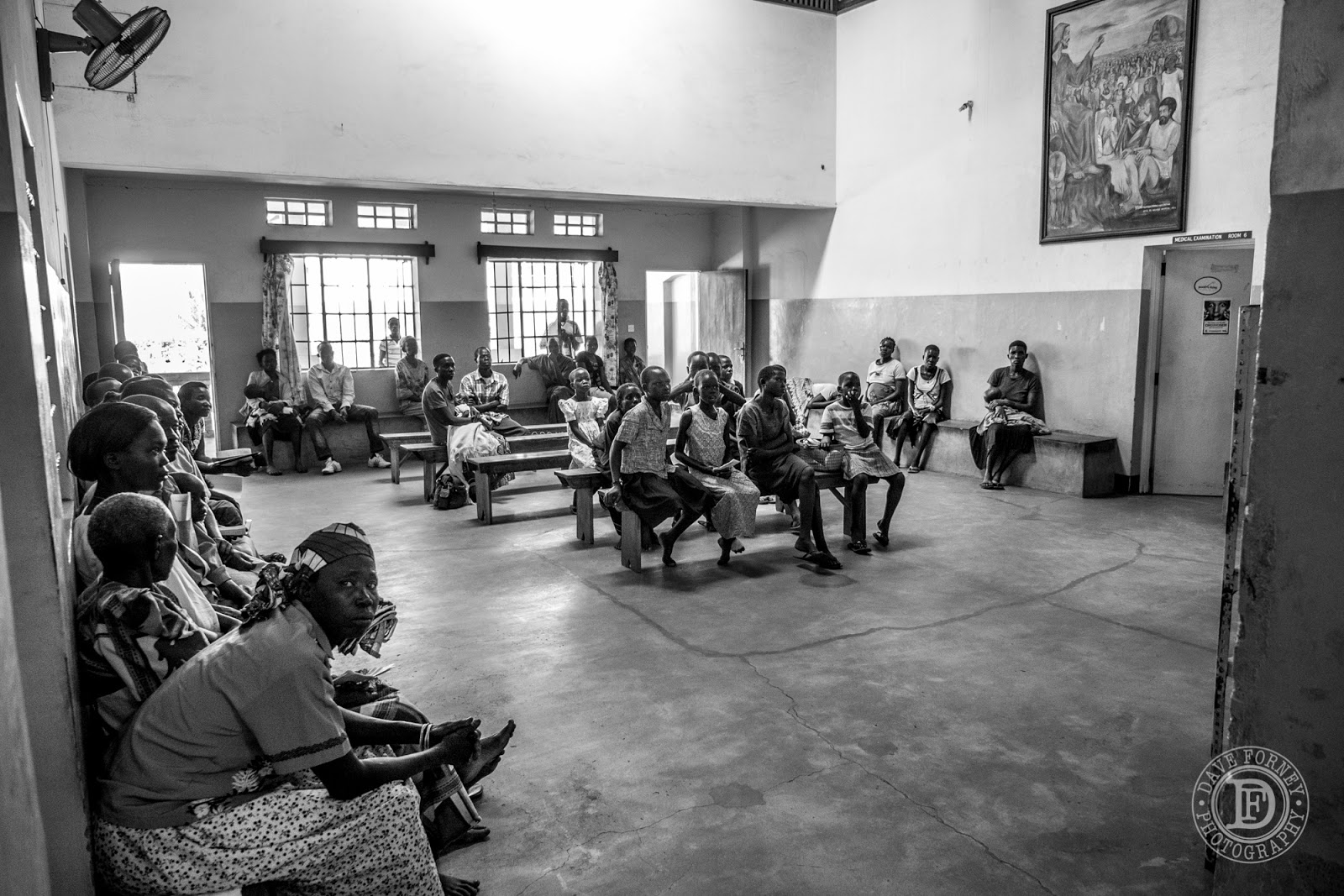 Outside the maternity ward there was a long line of women with brand new babies being processed out.  I loved the big smiles of the nurse (at right) and assistant (at left) who were helping with the process.  This ain't like America where they keep you in the hospital for a day, or a couple of days, just to make sure everything is good.  After delivery, if mom and baby are well, then off you go! :-) 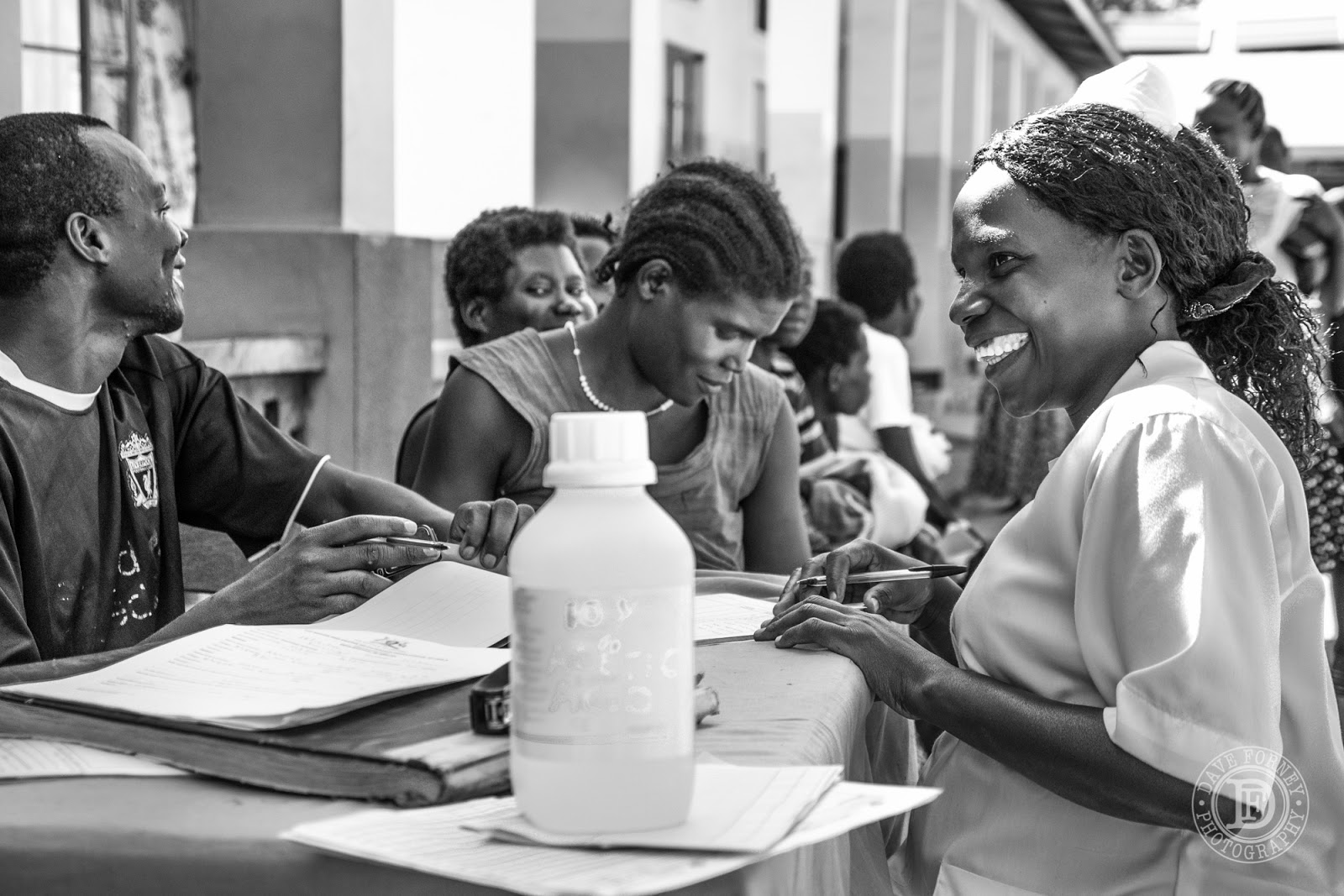 Here we interrupted the staff of the children's ward who were taking a short break.  Again, they were full of laughs and smiles.  It was great! 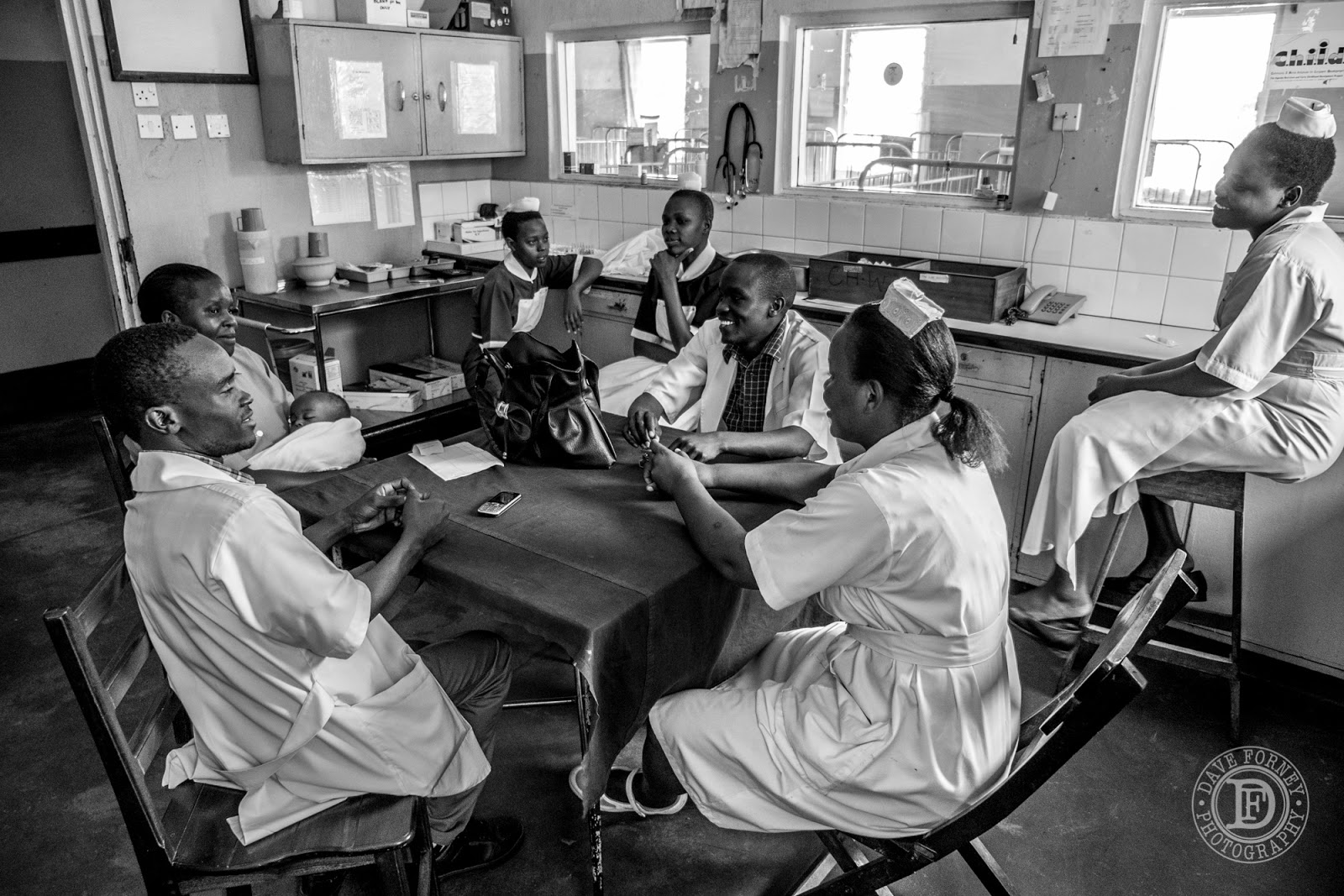 No laughter around the TB Ward, however.  We didn't go inside this one... 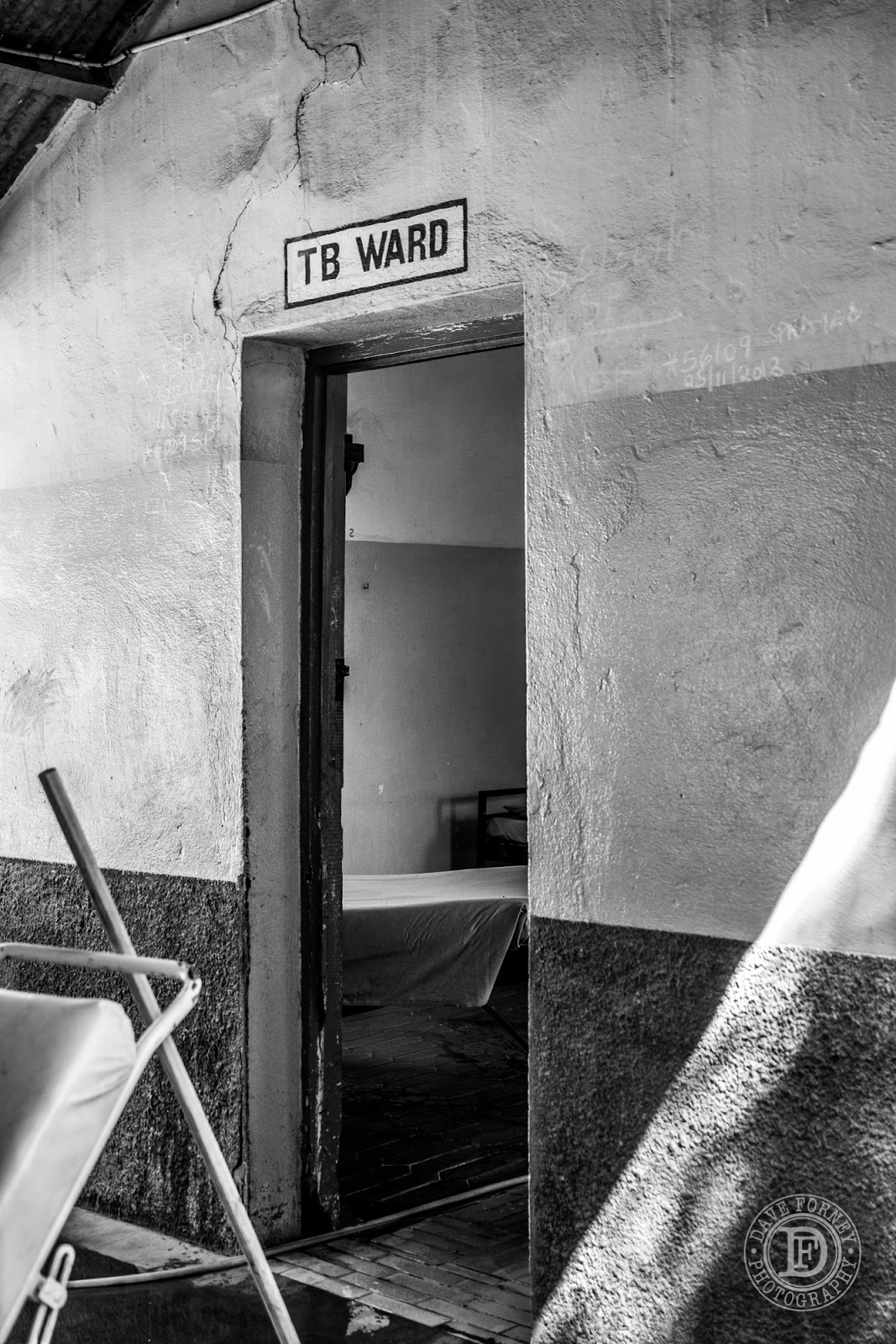 They were actually cleaning it at the time.  In fact, all around the facility, even though much of it was very rudimentary and basic, there were always people in the process of cleaning and sanitizing.  I was impressed by the way in which they were taking care of what they had, and using it to it's maximum potential! Most patients (hundreds per day) are treated and immediately sent on their way.  But they do have some beds for the more serious cases.  It's certainly not what you would be used to in the West, but for these folks it's the best--the only--option.  And they are blessed to have a wonderful group of very energetic and well-trained, caring, staff to take care of them. 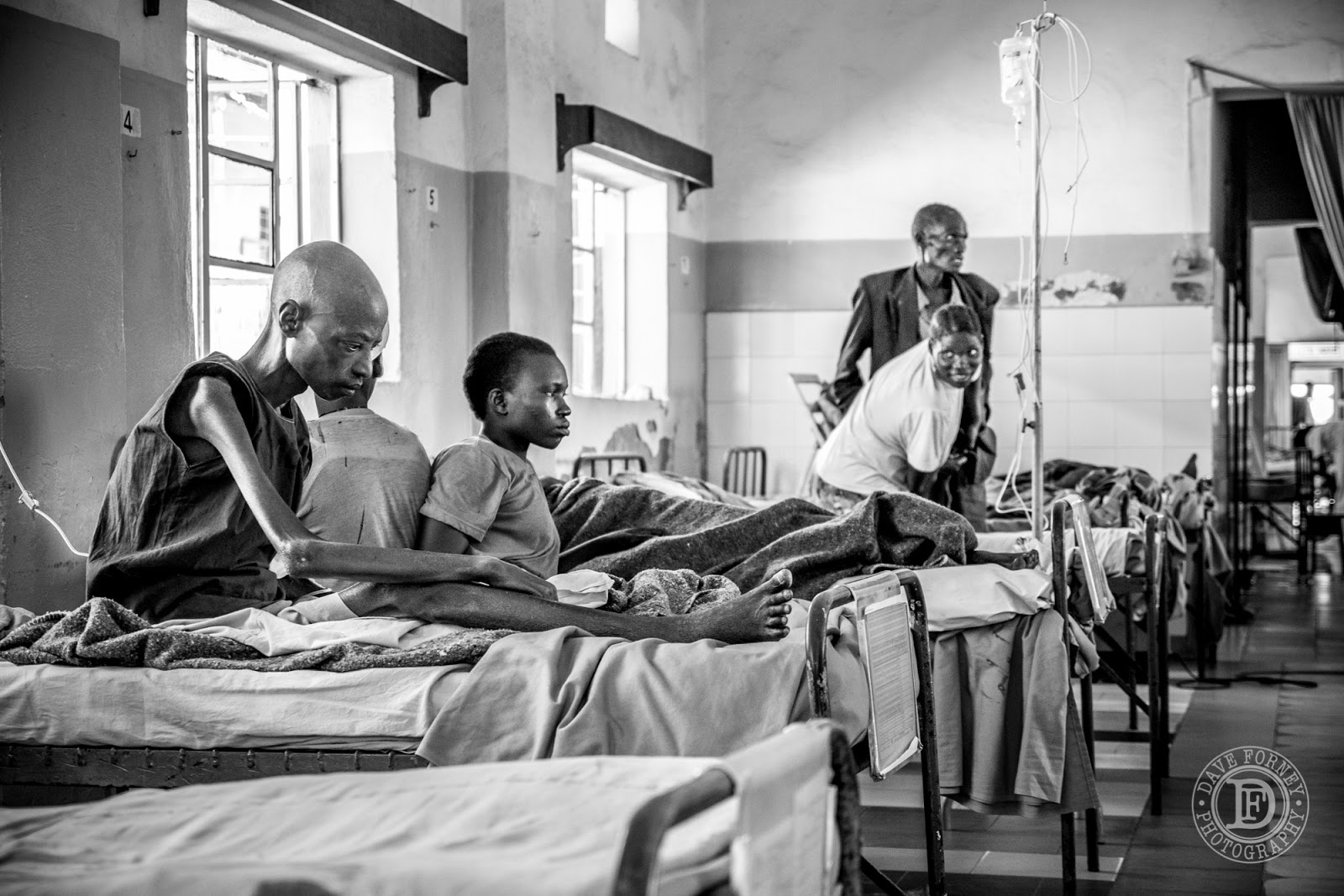 When I did my post back in December I mentioned that I had taken Andy along on the flight that day.  He's one of our awesome Aircraft Engineers (mechanics), who are the heroes of us pilots.  He was snapping some pictures while I was busy with our patient and the aircraft stuff.  I didn't have the pics available back when I did my first post, so I thought I'd share a few of them here.  If you'd like to check out a few more of his shots, or read about the story from his perspective, you can check it out on his blog here.

Praying with Lois, who is on the stretcher on the floor behind the back seat, and her friend Jackie who accompanied her. 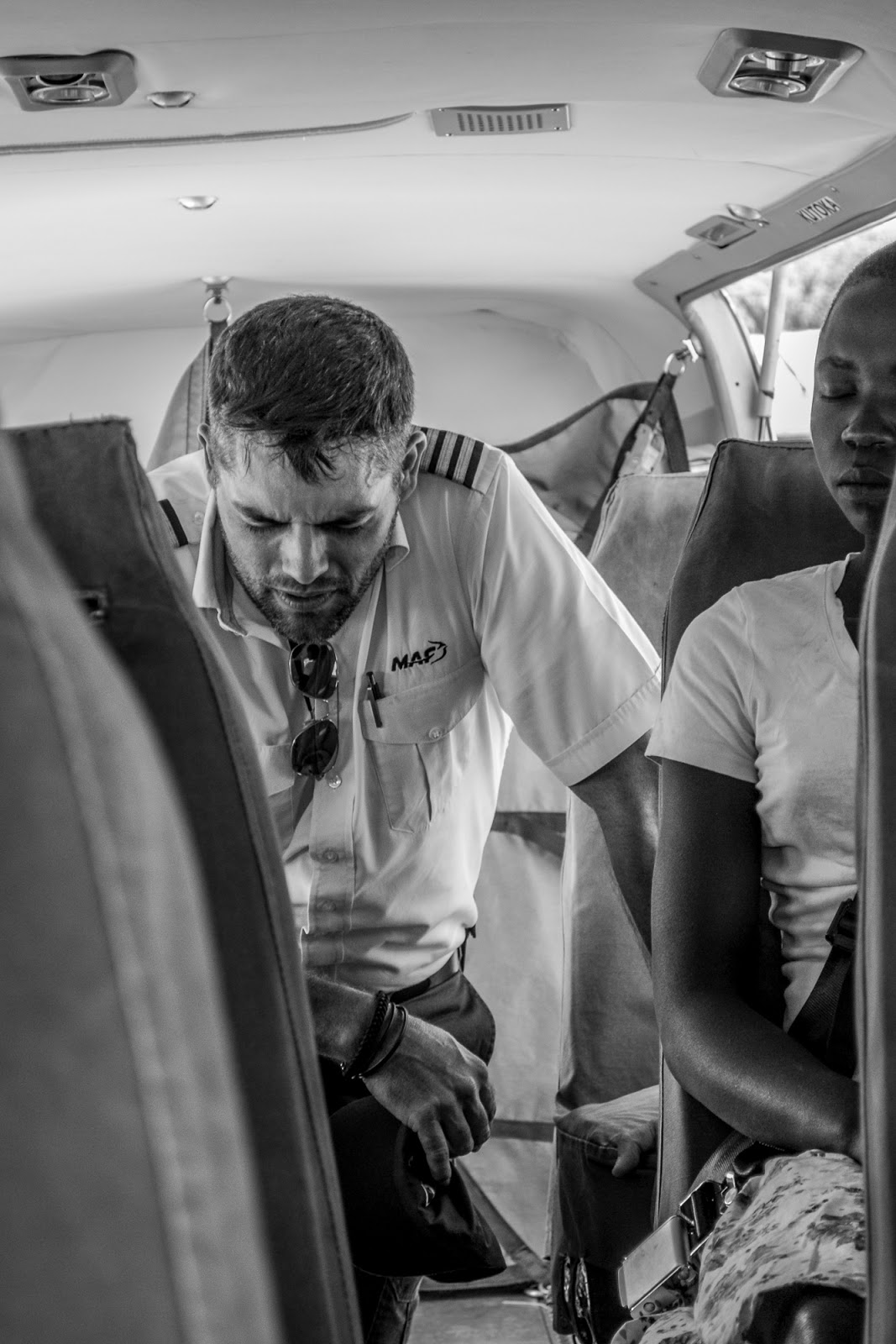 Carefully off-loading Lois in Kumi, where there was a waiting ambulance to take her to the orthopedic hospital. 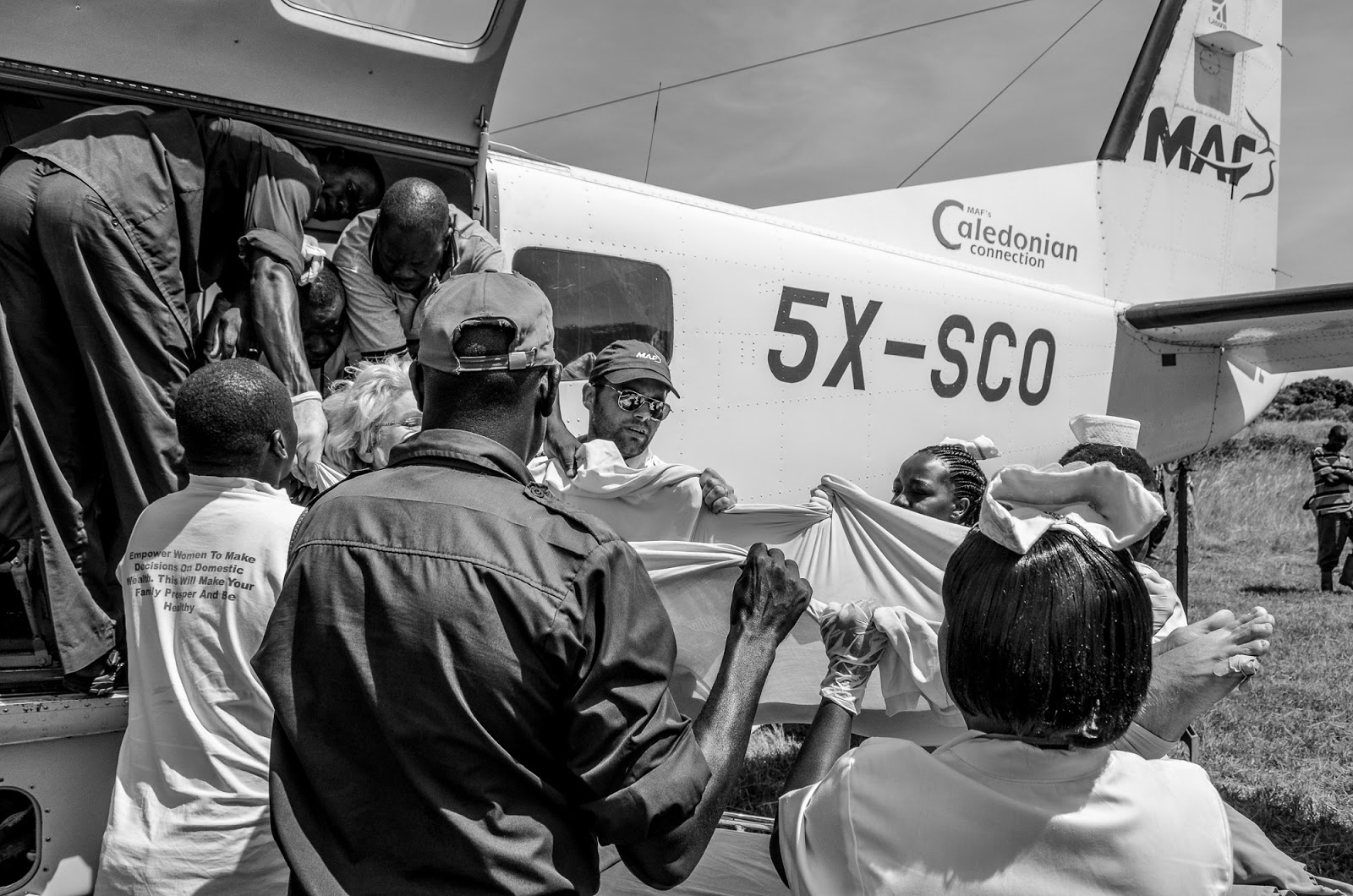 Before leaving she grabbed my hand and enthusiastically thanked me and MAF for the help in transporting her by air--the alternative being a very long and grueling 4x4 journey over land. 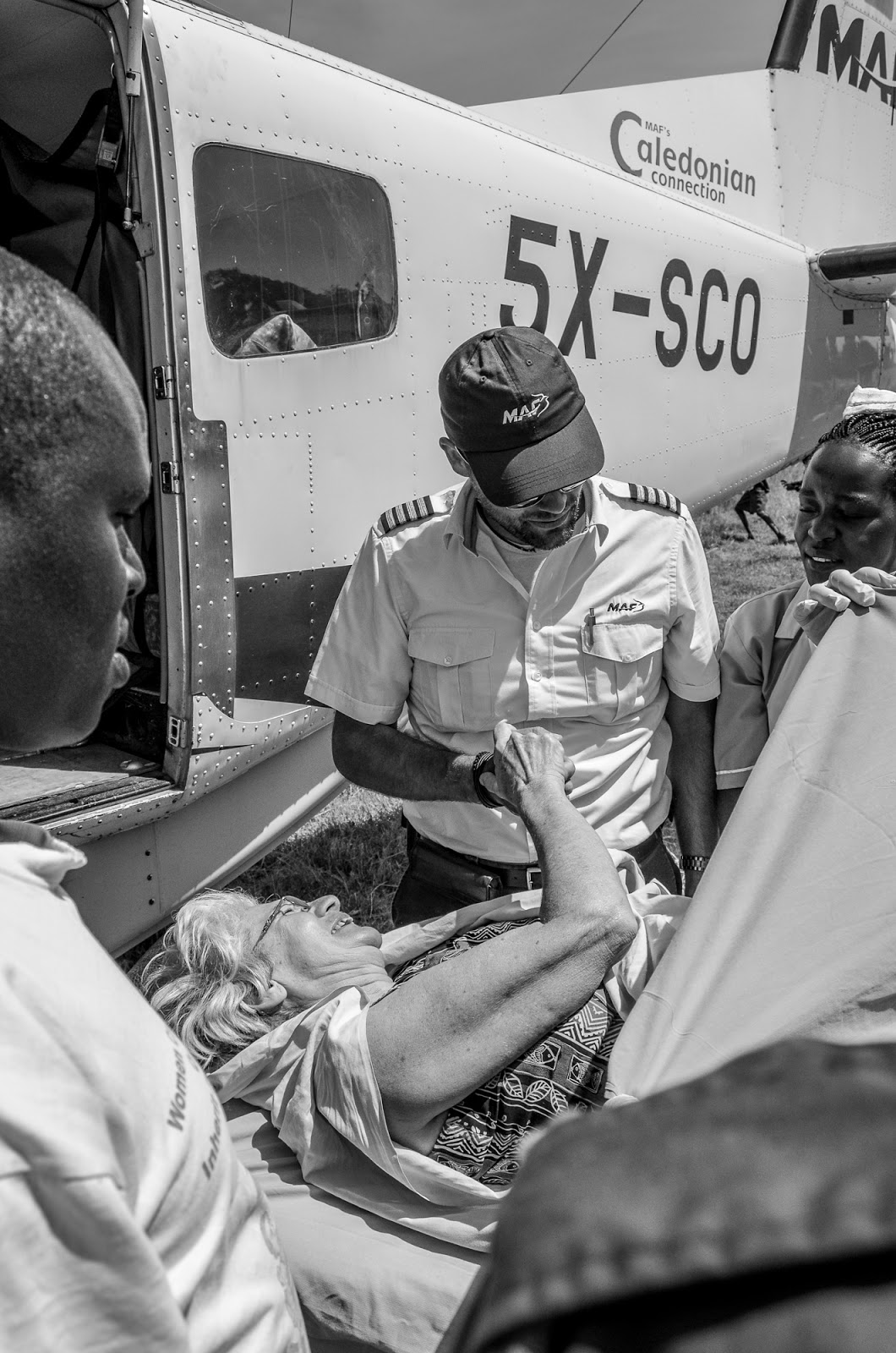 You are such a blessing to that region! We are very spoiled in the West with our healthcare and hospitals . That one boy was just a skeleton and made my heart hurt for him. Thank you for all you do!