We were only there at Musana Camps for two days, but the sunrises both mornings were magnificent!  This was the view we enjoyed the first morning just as the sun peeked up over the Eastern edge of Lake Victoria. 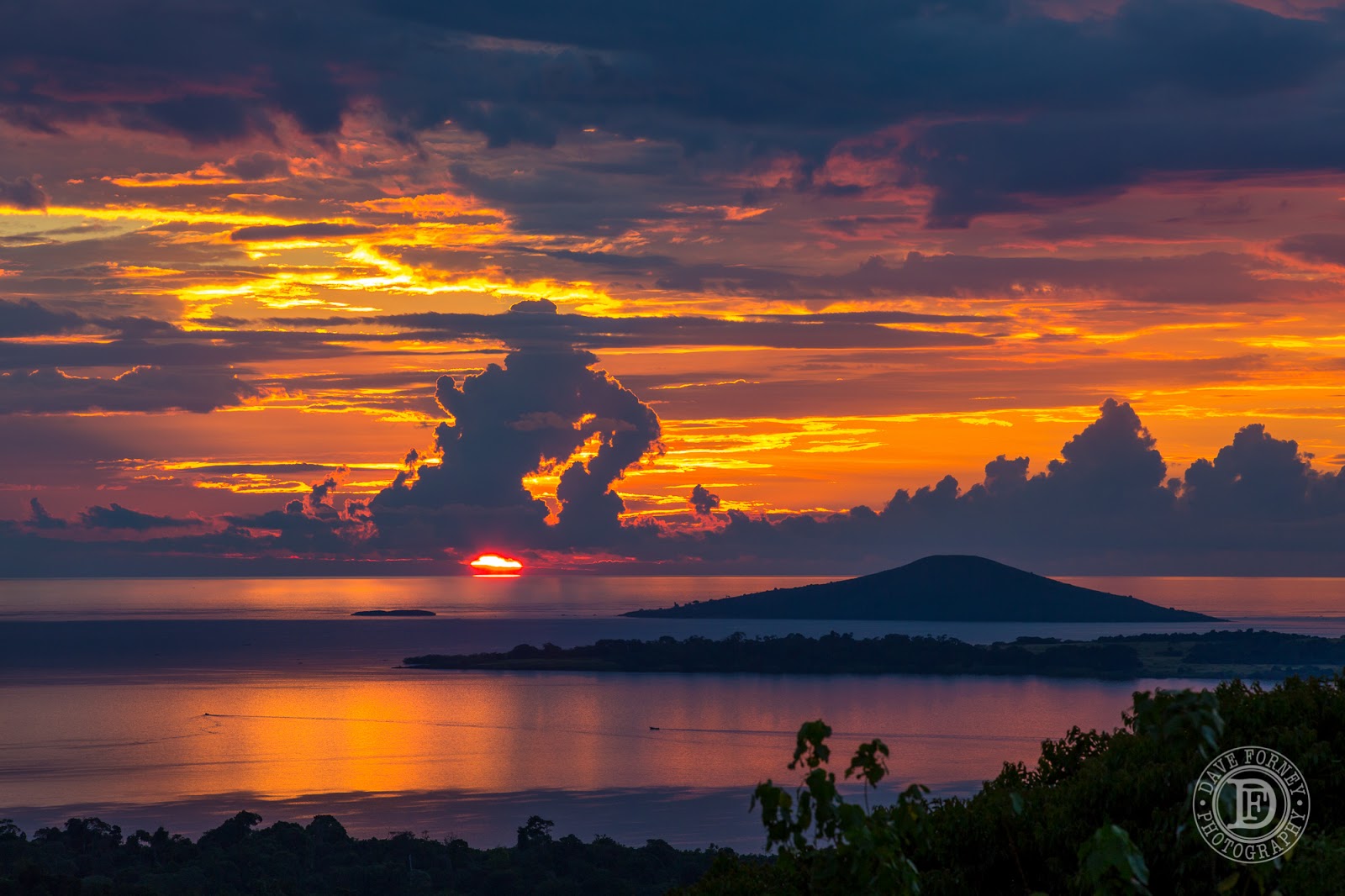 And this is how far we had to go to enjoy that view...about three feet from the front door of the house where we were staying.  We could watch it all right there from the front porch!  I'm sure Joy and the McFarlands will appreciate me putting a picture on here of them enjoying some quiet time about 15 minutes after getting out of bed.  No makeup, no showers, but hey--they look great don't they?! 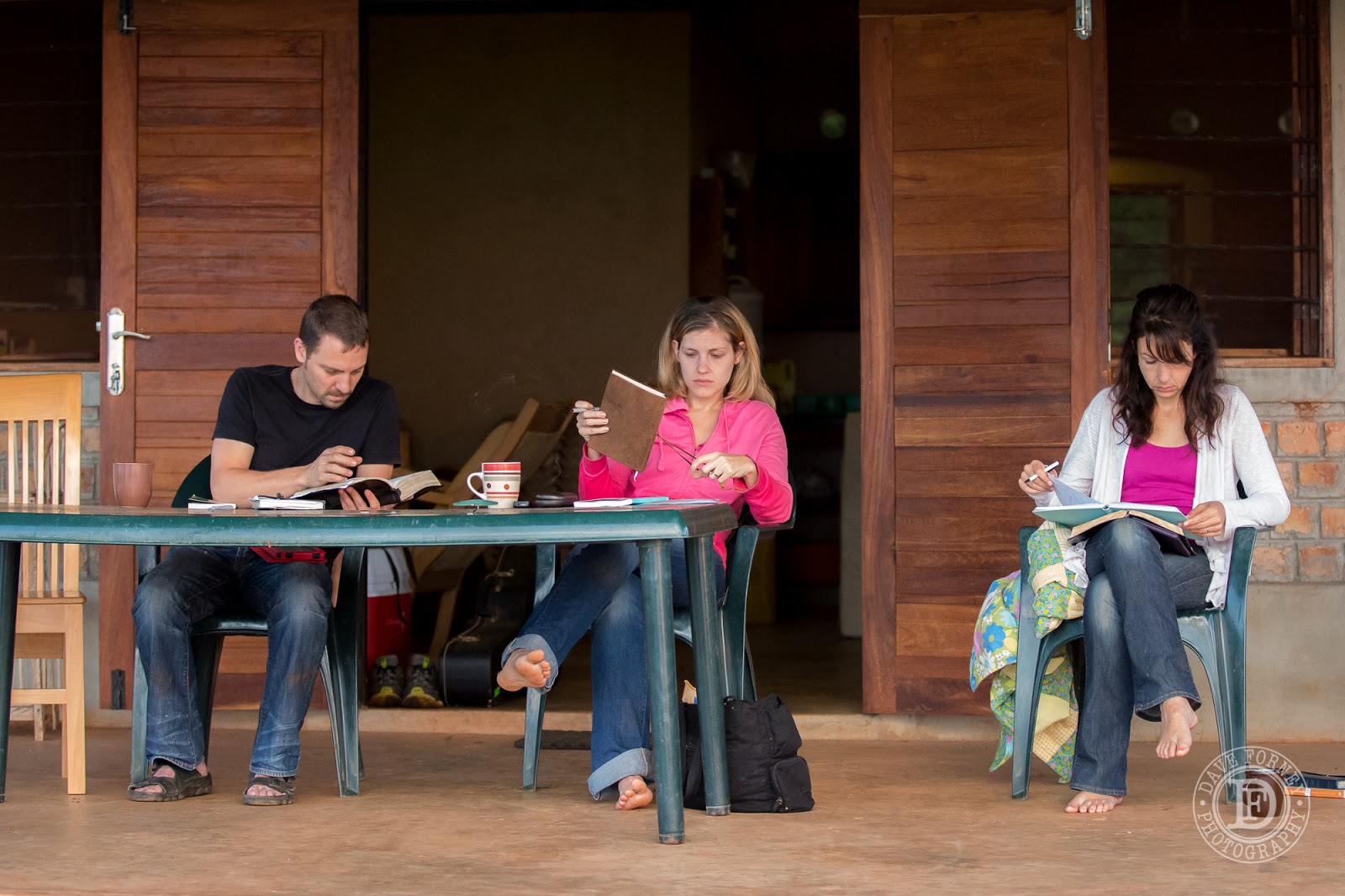 While they were enjoying their thing, and occasionally looking up to exclaim something like "wow!" or "amazing!", I simply couldn't take my eyes off the changing scene in front of me.  I love watching the weather, and I obviously enjoy photography.  I sometimes think I could/should have been a wildlife photographer because I would actually have no problem sitting for hours, or even days, waiting for the perfect shot, soaking it all in while I wait.  But since I don't have the time for that (six kids and a busy schedule keeps me from too much down time), or the money for the lenses, I just get to enjoy little bits here and there.

Anyway, this was a rare morning where I got to just sit there and take it all in.  I loved watching how the scene was continually changing--the colors magically taking on completely different tones depending on where the sun and clouds were.  Every 30 seconds it seemed like a totally different scene to me.  The first picture, above, was taken at 6:32am.  This picture, below, was taken two minutes later at 6:34am.   In two minutes, check out how far the sun has moved, and how the overall colors have changed from shades of purple and deep blue to more of an orange and lightly-muted purple glow. 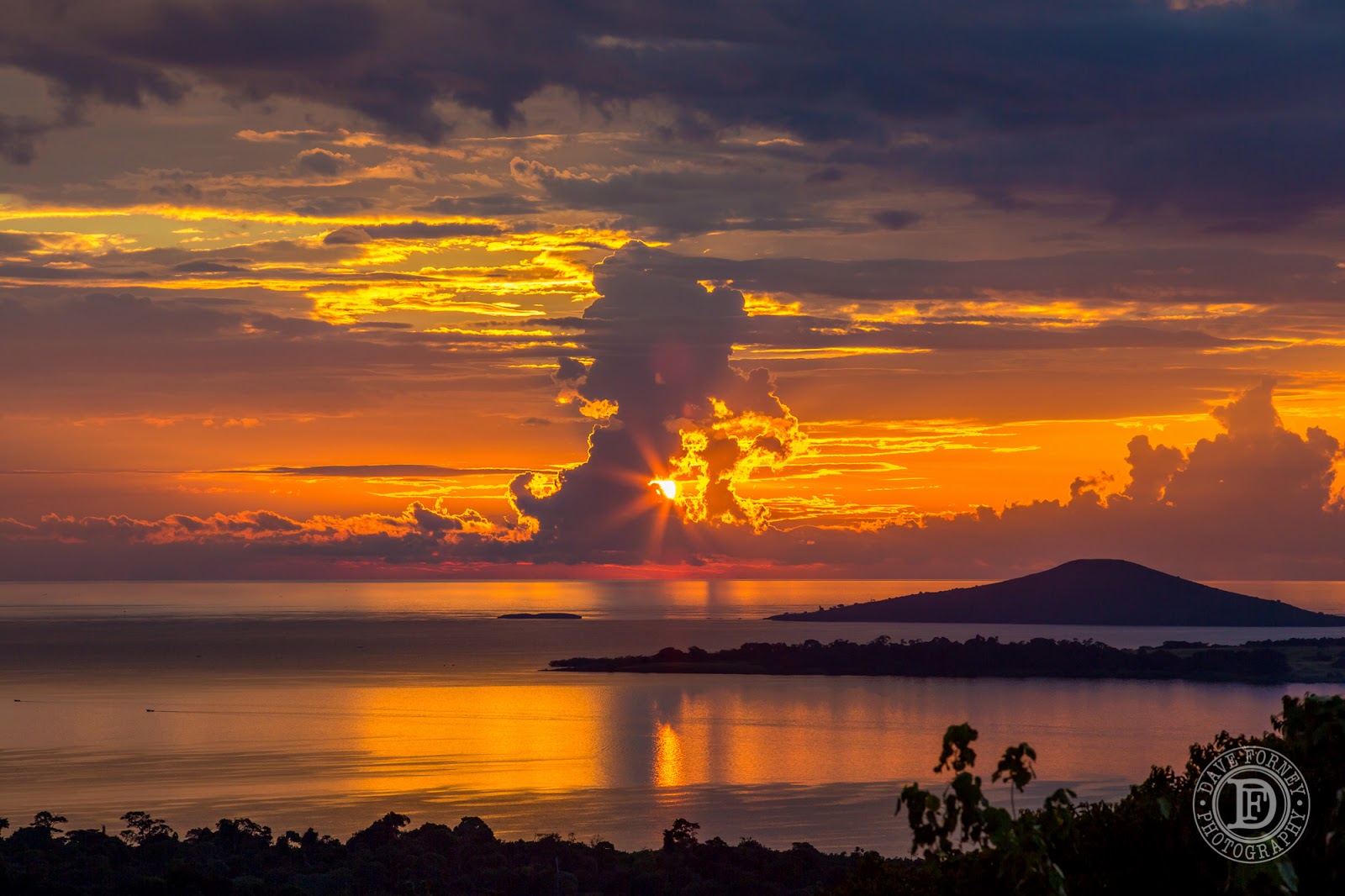 Of course, the choice of lens, and perspective can also dramatically change things.  The above two shots are in nice and tight (200mm).  But on the previous post, the first photo I showed was an image shot just a few seconds after the one above, but much wider (70mm).  In that one you can also see the fishing village in the foreground, and more of the sky.  It really changes the look of it.

Now, six minutes later at 6:40am, I put the really wide lens on as the sun climbed high enough to allow the myriad shades of blue to show, while still painting the undersides of the dissipating clouds orange and yellow, leaving those in shadow purple and pink.  So awesome!  (This one was shot at 16mm). 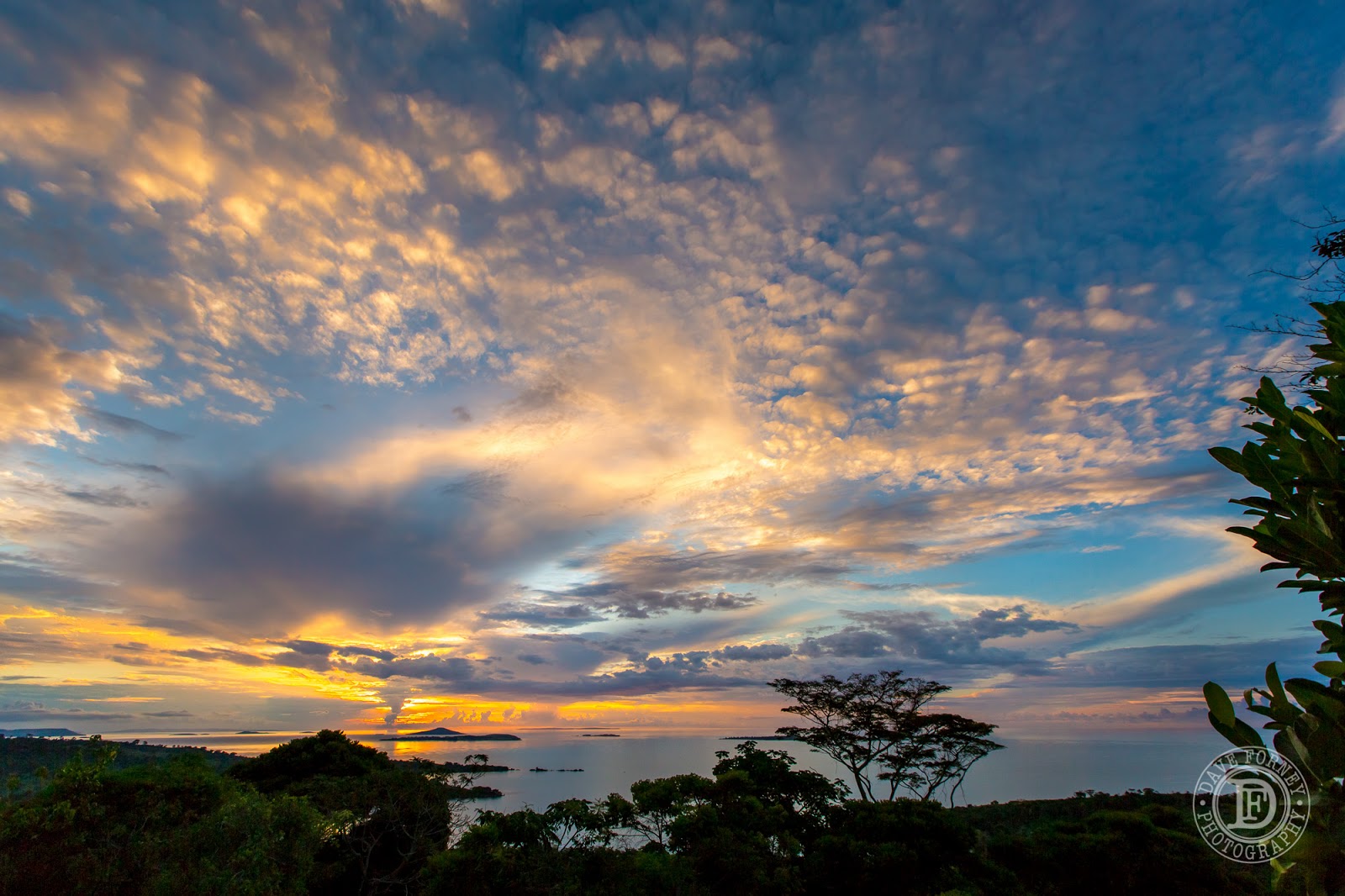 But wait...there's more!  Even after the glorious sunrise was finished, the show didn't end there.  All day long the clouds and weather were constantly changing and fascinating me.  At one point, we saw a few water spouts virtually appear out of nowhere, way out in the distance over the lake. 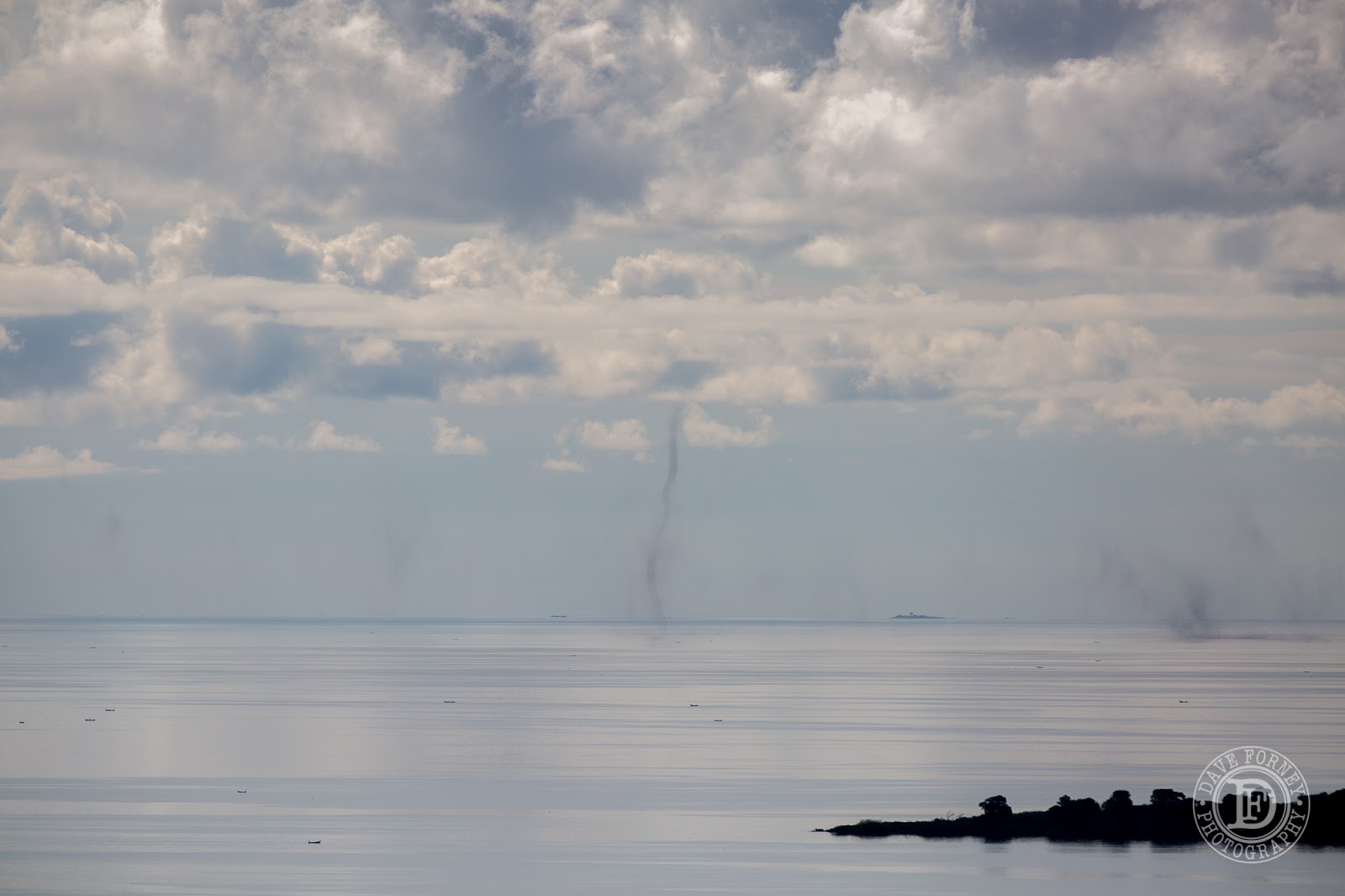 And of course, as the air warms up and the moisture evaporates off the lake, and rises, it forms new, big clouds, which often develop into thunderstorms.  I bet you can guess what I'm about to say now--yep, I love watching thunderstorms too--day or night.  They amaze me! 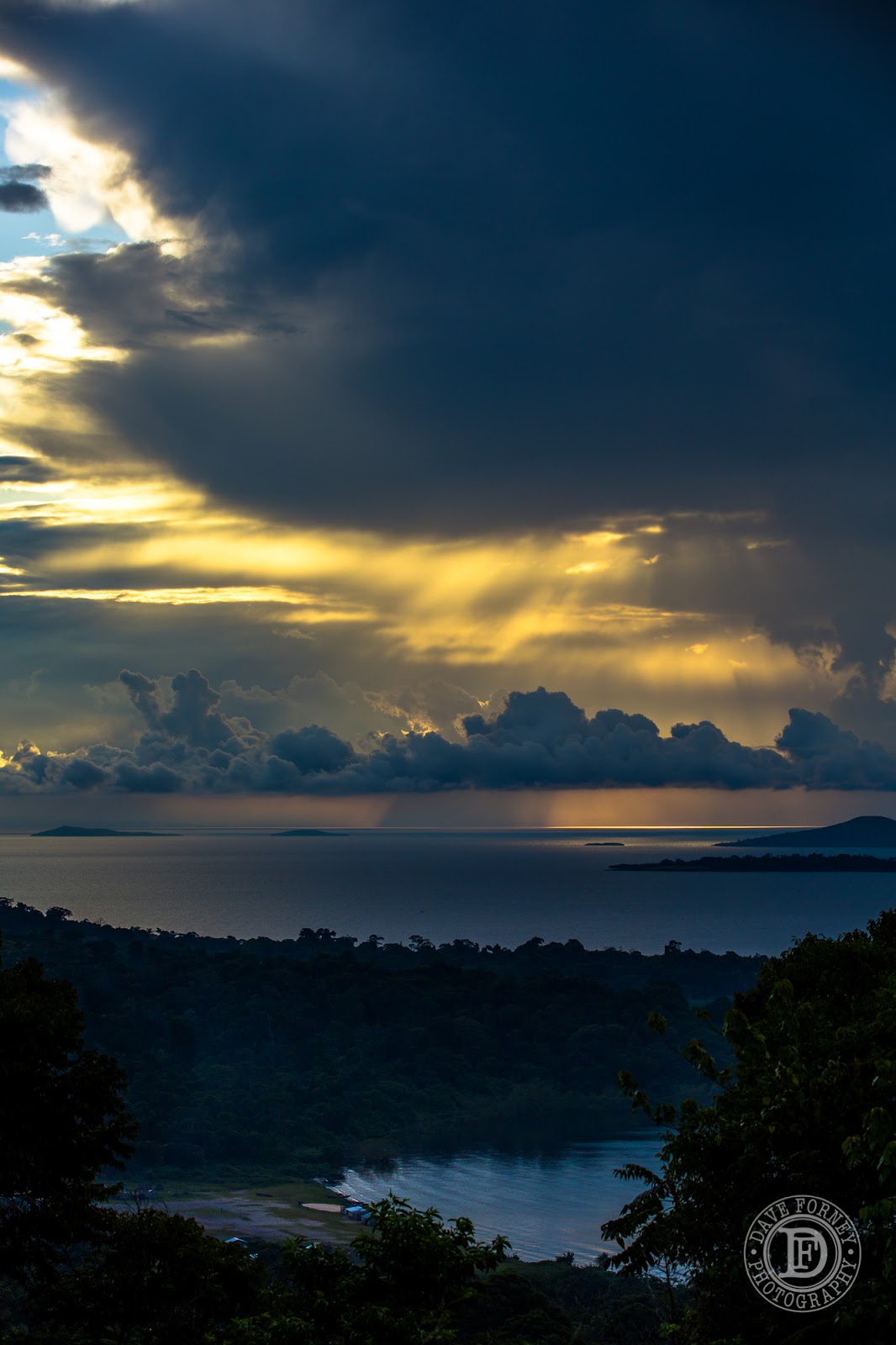 The second evening was mostly clear, with just some thin, high clouds, and we made a little campfire up on the hill, overlooking the lake, and made s'mores.  Good fun! 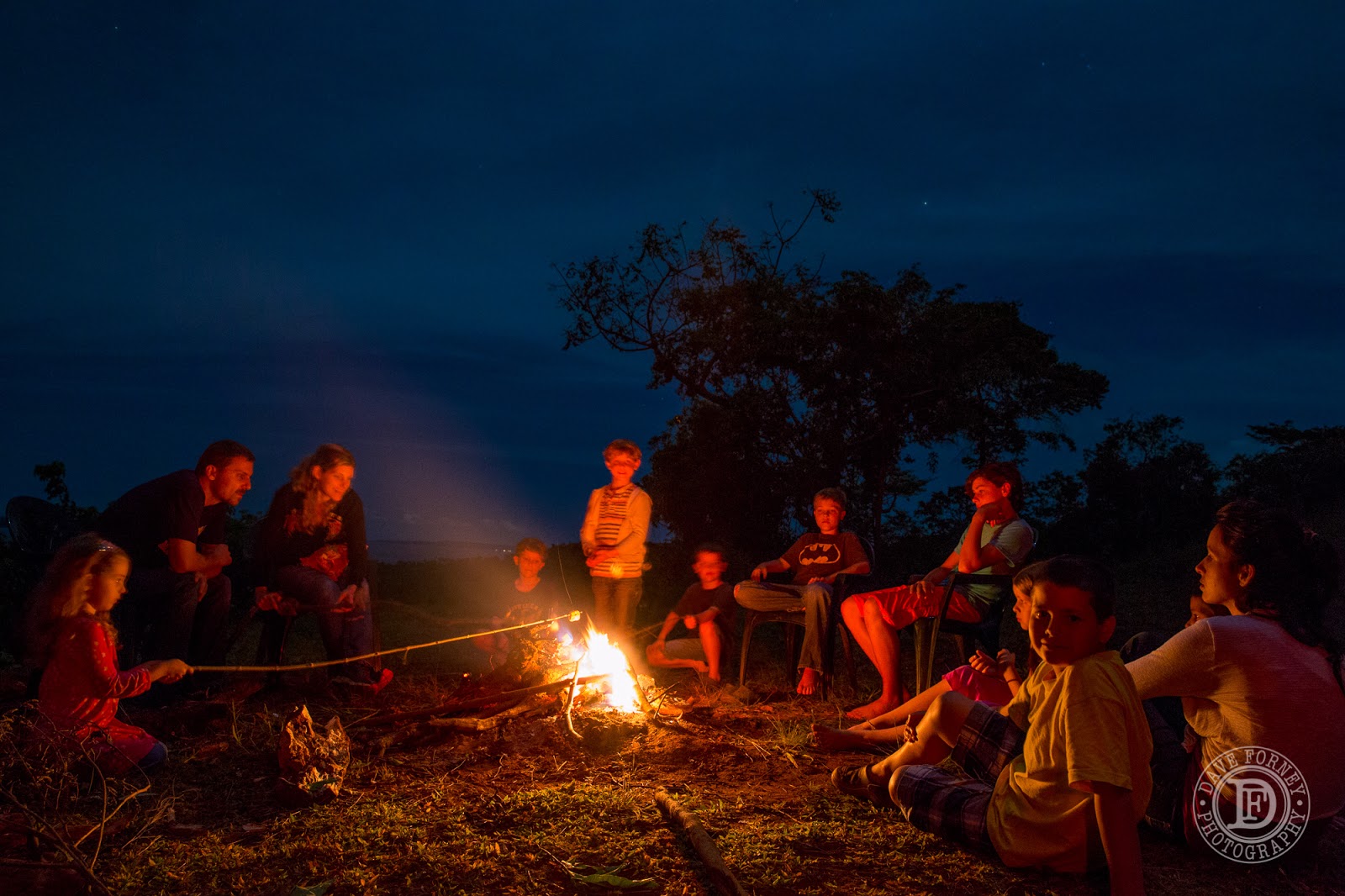 After the younger kids hit the sack, Britt and I spent a few minutes flinging glowing sticks through the air like a couple of crazy men (yeah, that's not a good idea if the little kids are still around).  It might have looked like we lost our minds (and I'm not going to argue that point) but we were actually trying to make light paintings.  Here's one that I made, while the camera was taking a long exposure sitting on a tripod.  It's supposed to be a mountain, tree, and sun.  If you look closely you can see Lake Victoria in the background, and the lights of some fishing boats out on the water.  You can even see the little light trails of a few stars shining through the thin wispy clouds above.  That's how much the earth has rotated during the 82 second exposure.  Cool hugh? 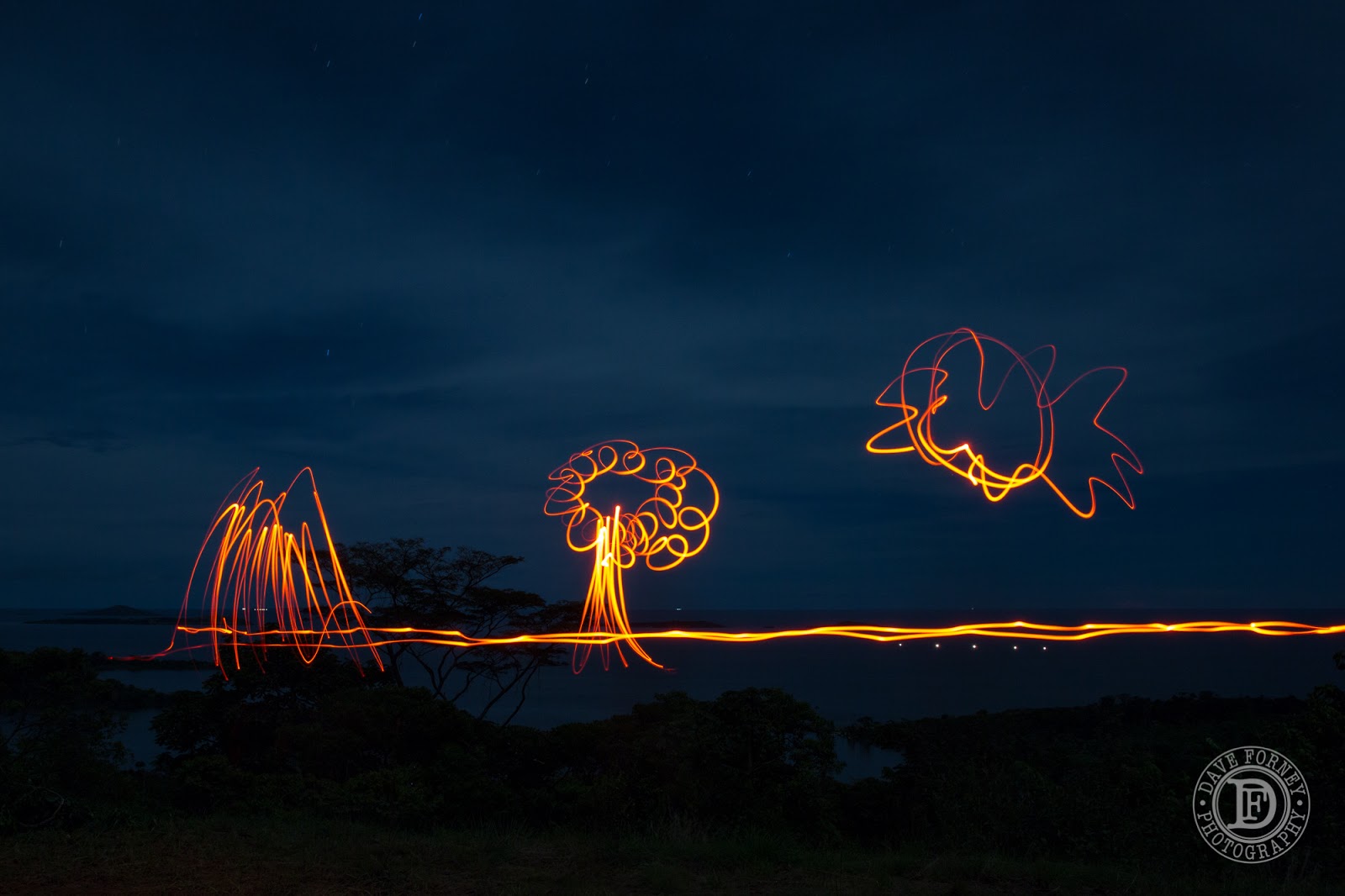 The second morning we were treated to another magnificent sunrise, just as amazing, but completely different from the one the previous morning! 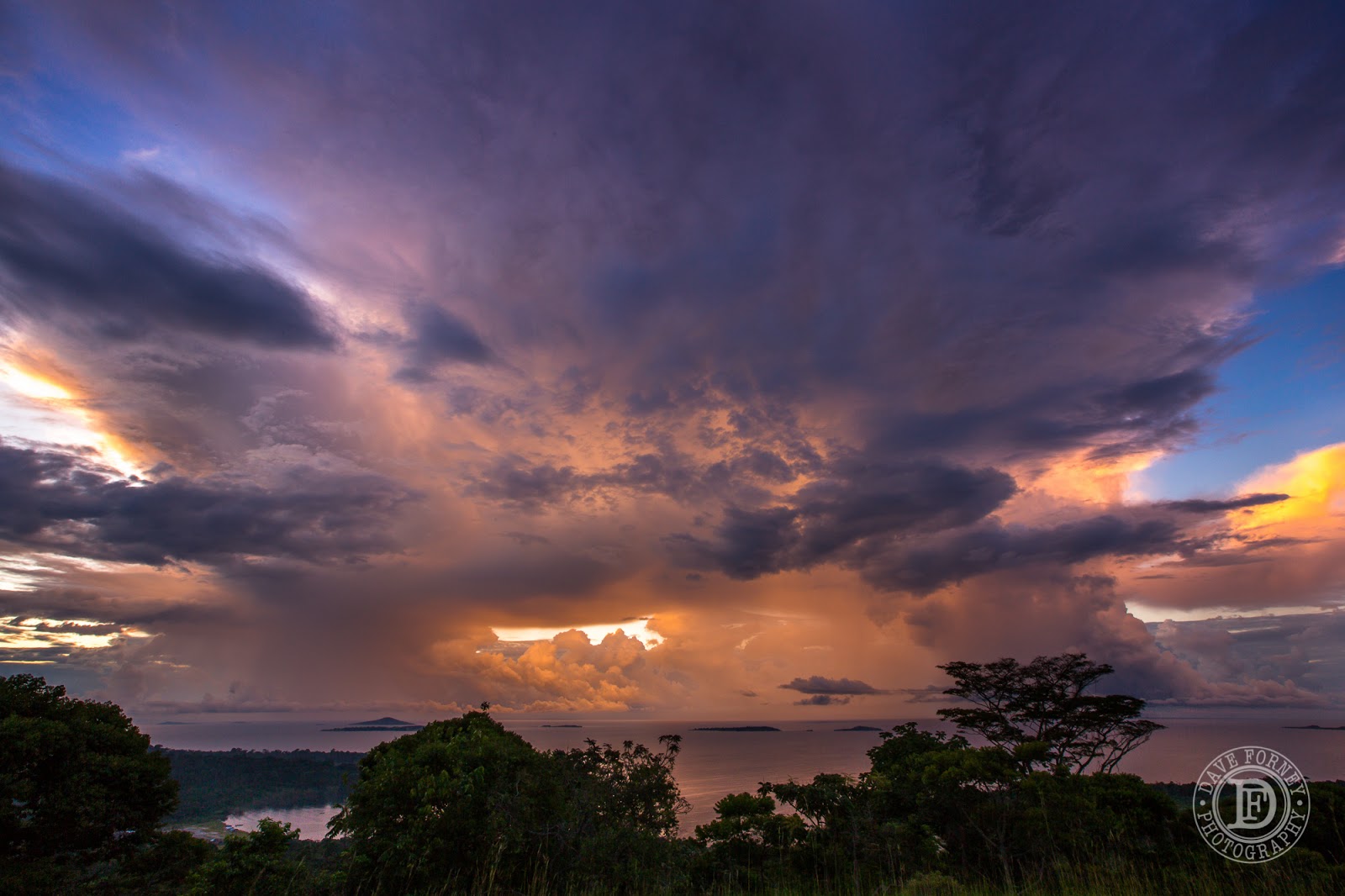 Another thing we enjoyed watching were the birds.  I love watching, and photographing nature.  It's especially hard to get good shots of birds, without the huge (and very expensive!!!) super telephoto lenses, of which I own none, but certainly covet.  However, that just makes it a lot more of a challenge--as I have to be more patient and get a lot closer to get good shots.  I'm not saying these are good, but they give you an idea of what we enjoyed watching. 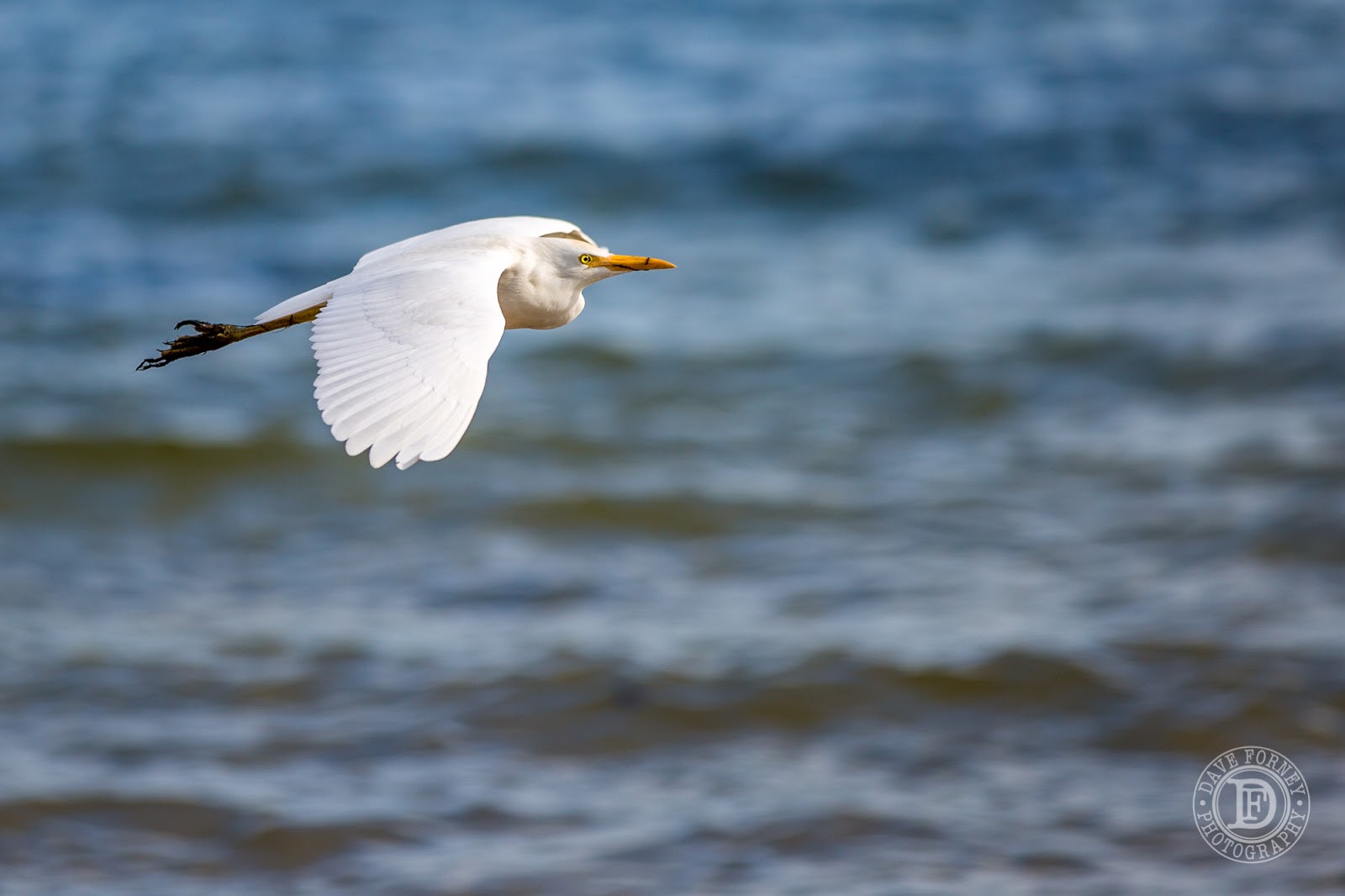 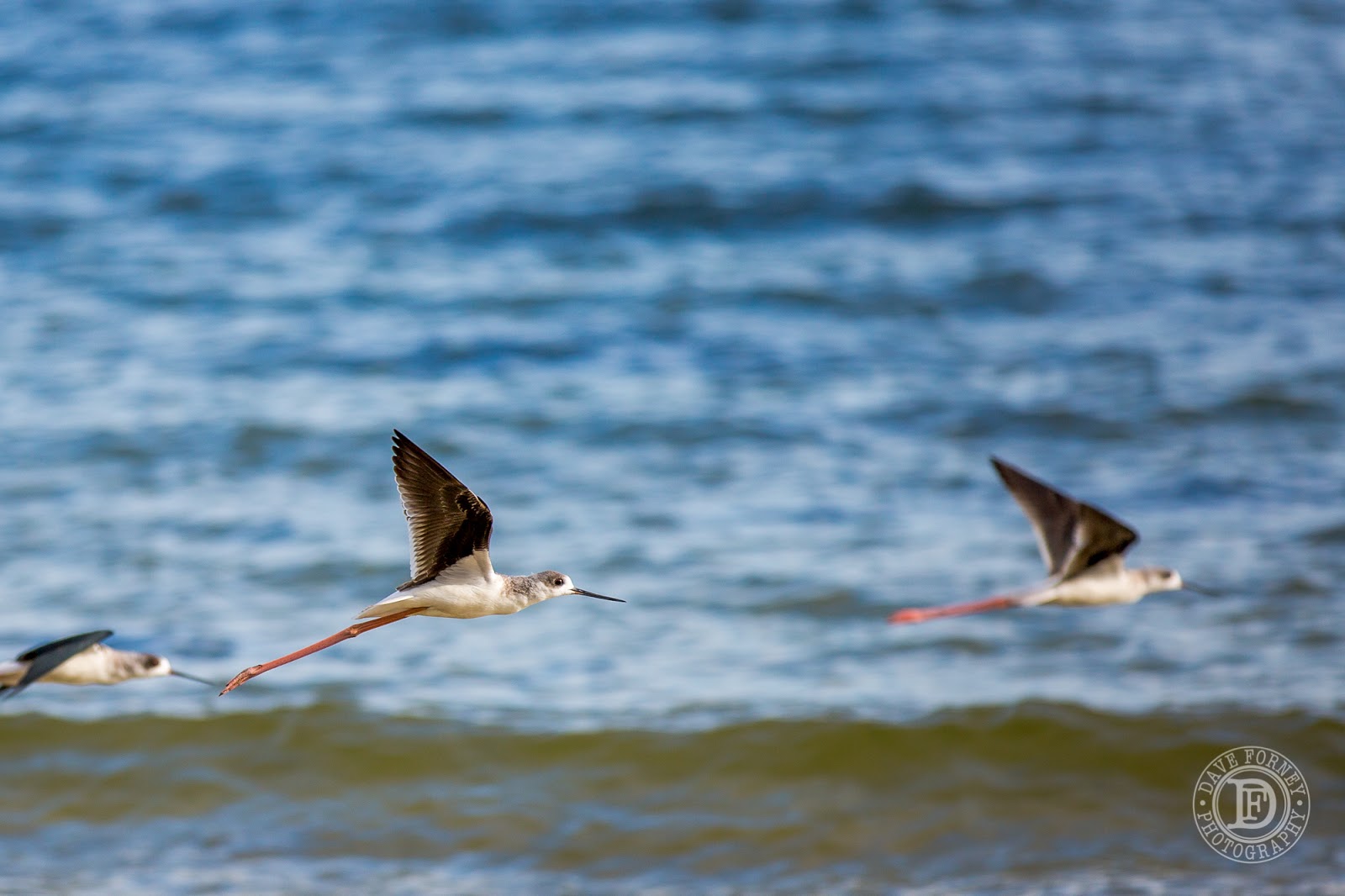 There were a ton of large grasshoppers flying around--the kids were kicking them up in clouds as they ran through the grass.  Capitalizing on the great opportunity for a snack, a group of kites and hawks were circling close above, diving in and catching the large grasshoppers in their talons, and then quickly gobbling them down while they flew.  If you look closely, you can see one of the just-captured grasshoppers in the talons of the bird below. 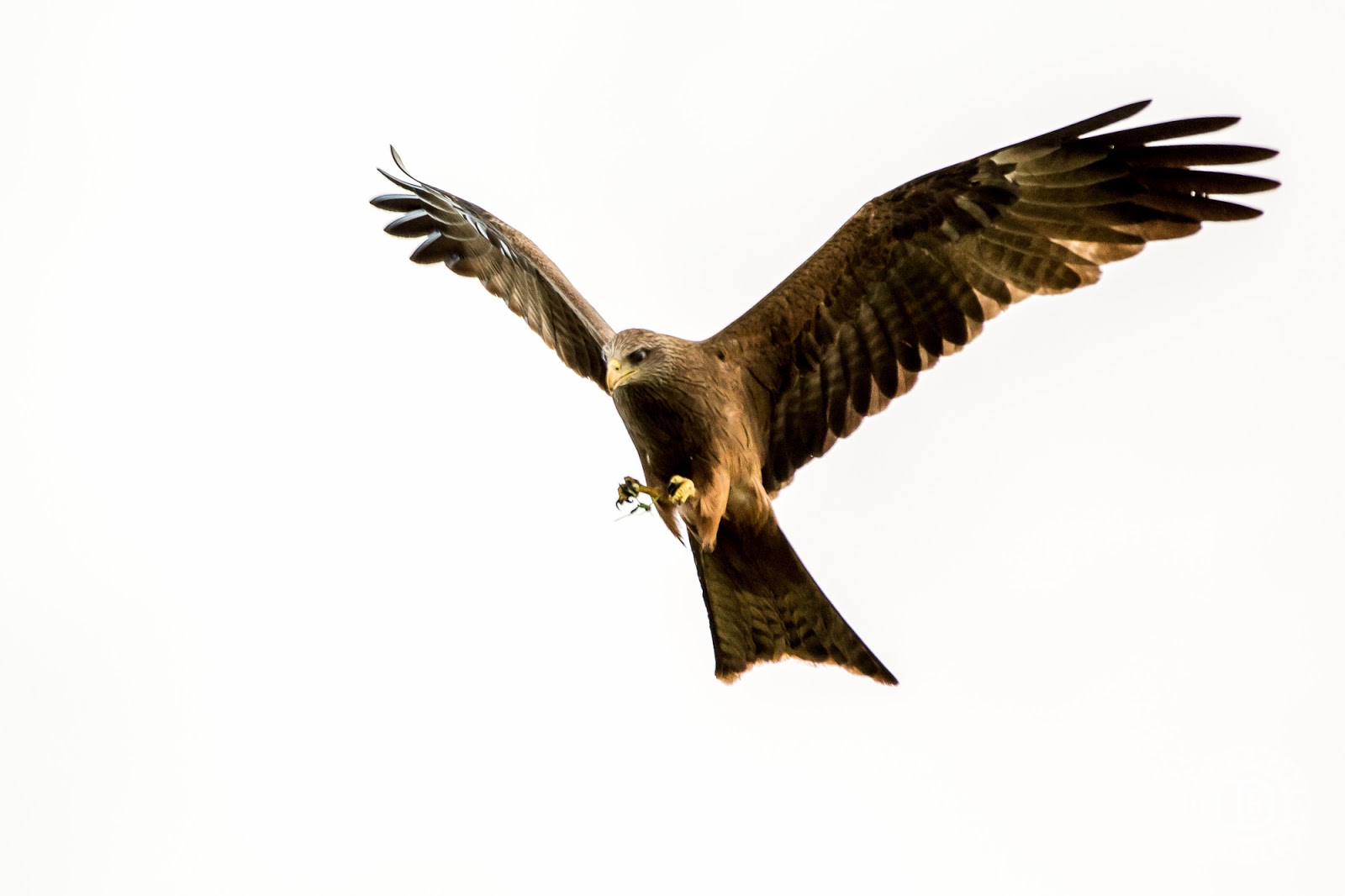 Stop by again next week for a few more shots of some of the other birds and wildlife we saw at Musana Camps.
Posted by Dave at 8:42 AM