Brown and black... these are the two predominant colors that can be seen in the parched landscapes of Northeastern Uganda this time of year. 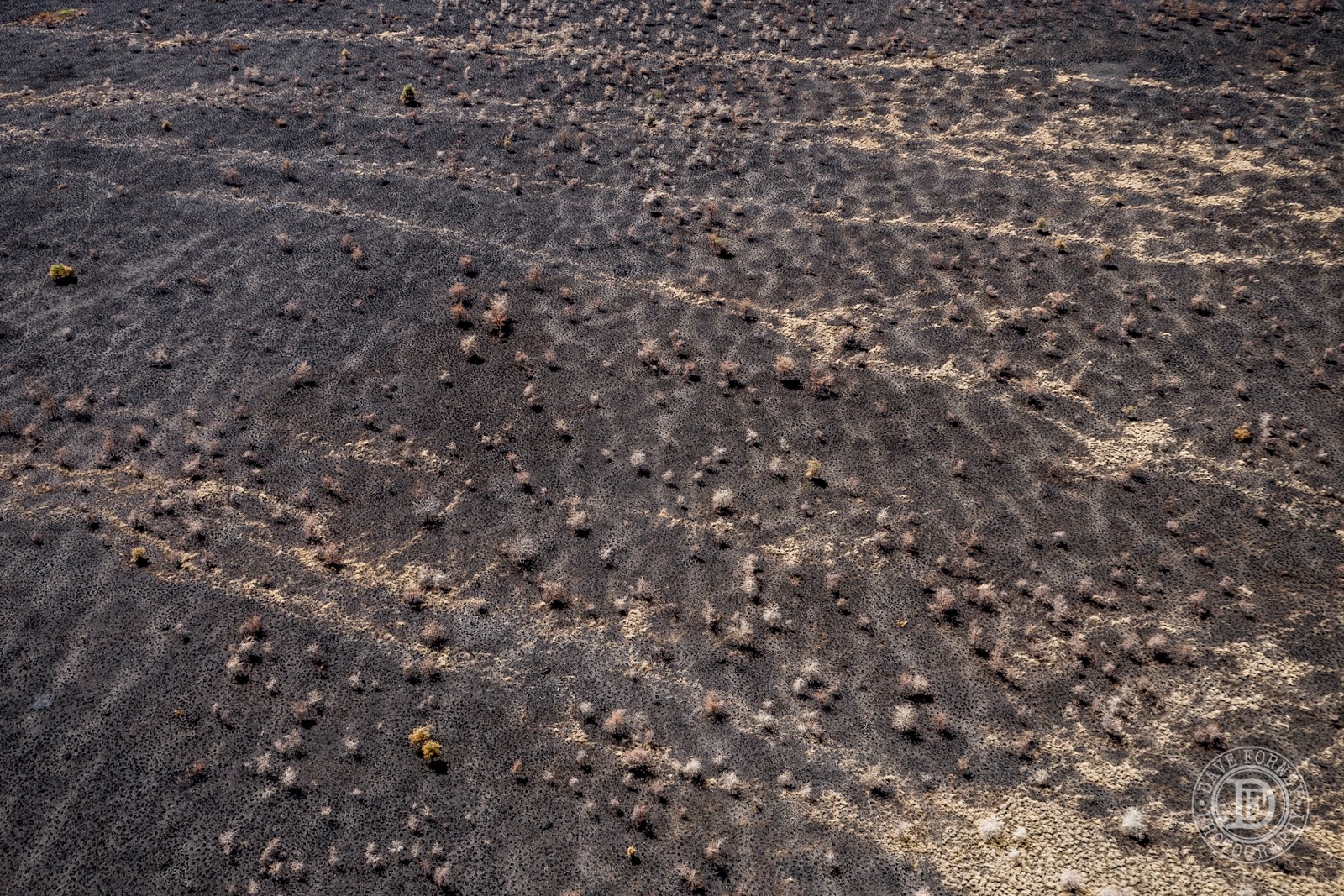 A few weeks ago there was still just a hint of a light shade of green showing through the vast landscape of brown. But there were also dark patches of black beginning to show, here and there, where the fires were starting. 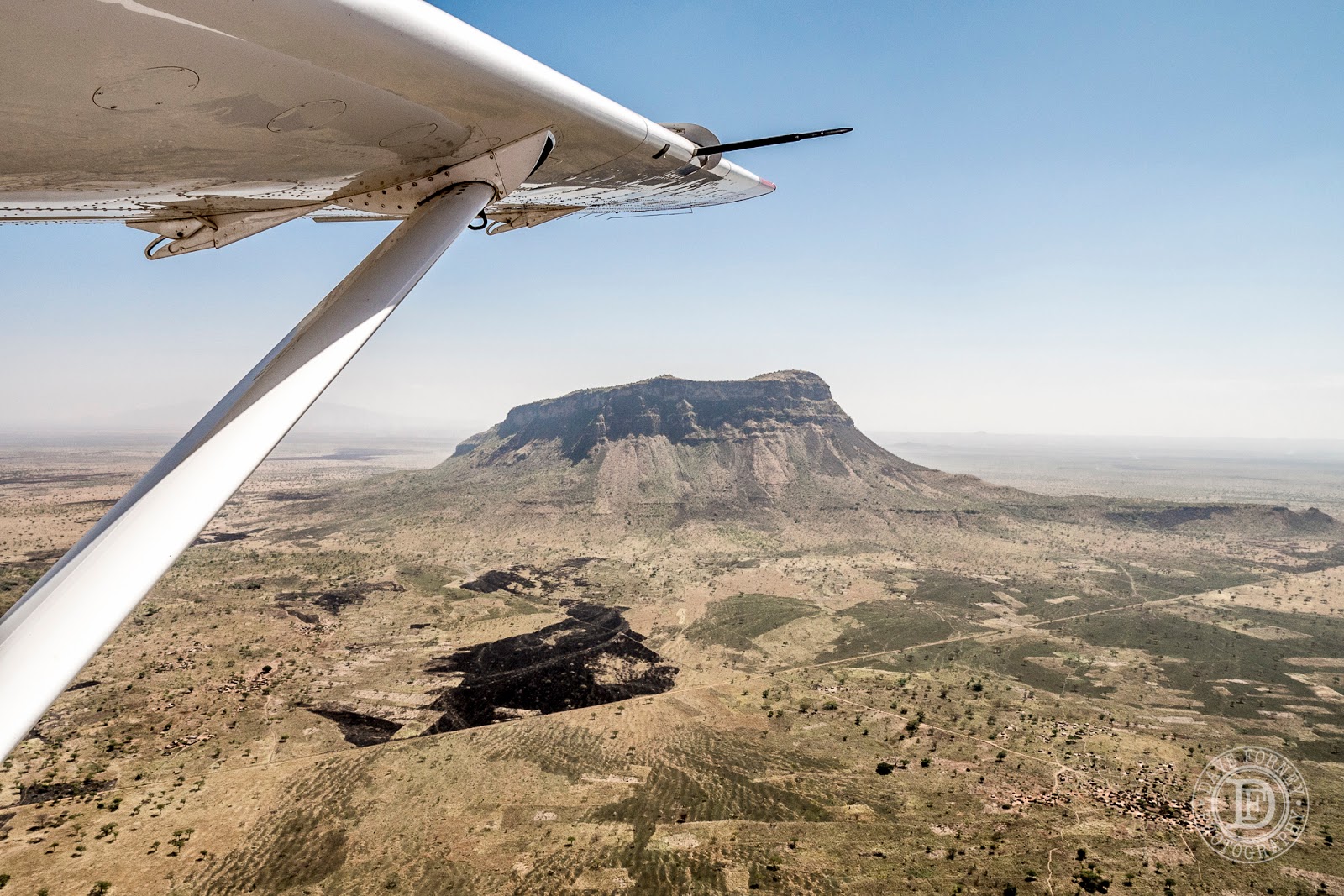 Here, a big, man-made reservoir, which will continue to hold water throughout the long dry season. There aren't many of these, and this is by far the largest. I've seen only a few others from the air, but they are very small, and often dry up before the rains begin again. As you can imagine, water is a very valuable resource for those who live in these remote places. 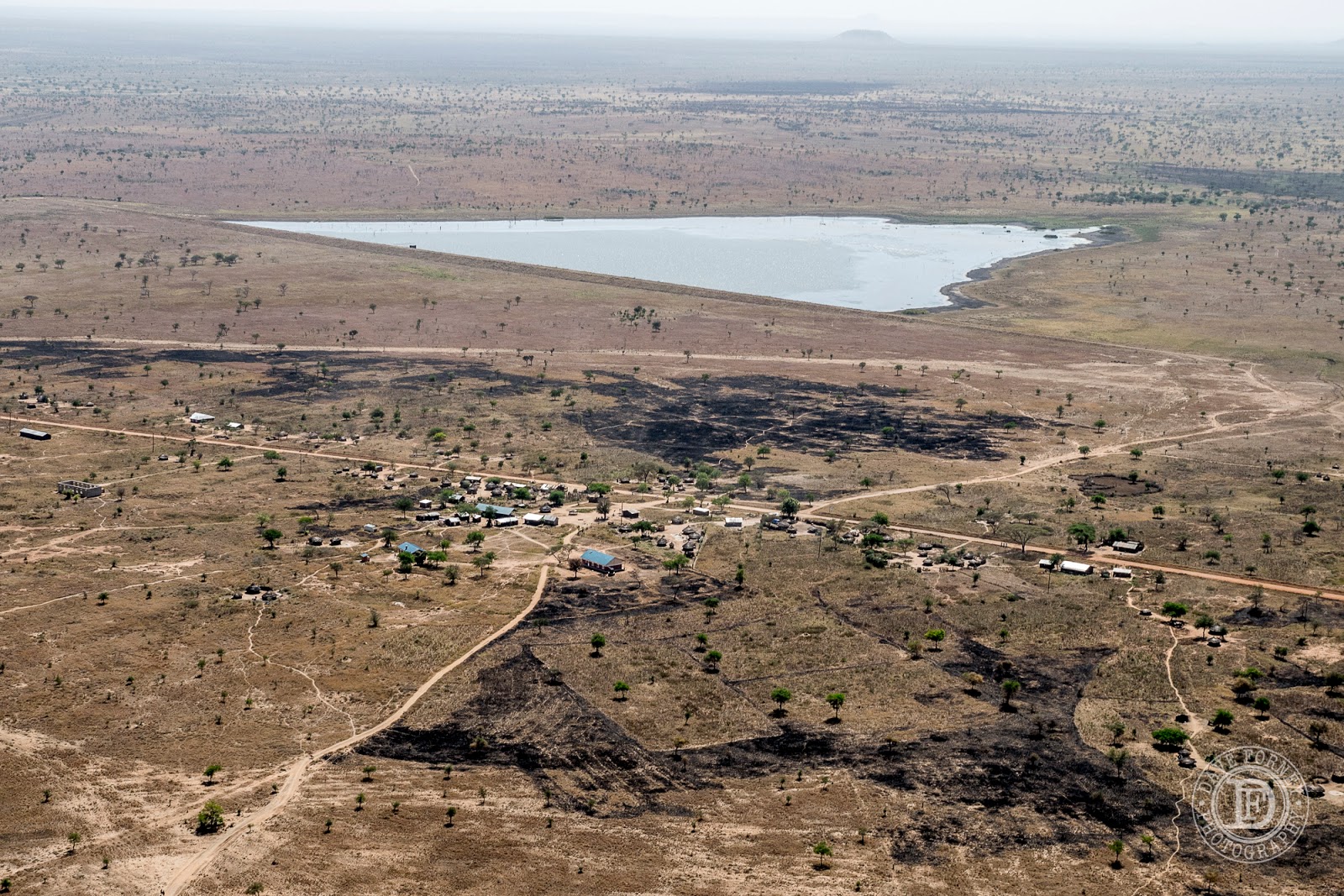 Here's a view of the Iriri Mountain, as seen from the direction of Mt. Napak. This was taken a few weeks ago. By now, it's much more brown and black, with very little of the green still showing. 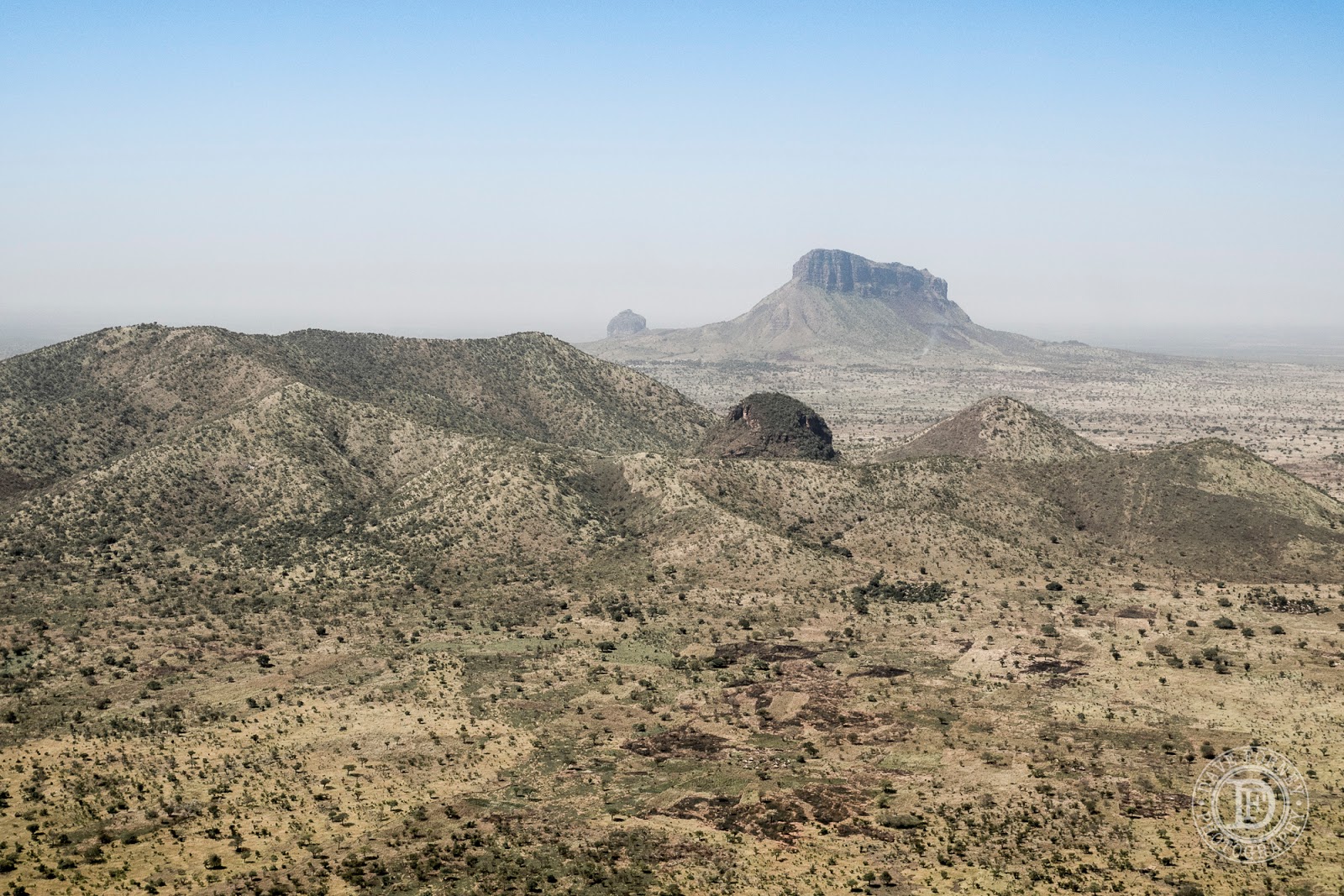 As the dry season continues, large holes will begin to appear in the dry riverbeds. In fact, I'm already seeing many of them around Moroto, but sadly, I didn't capture any in this picture. However, the green trees in the vicinity of the riverbed points to water under the surface. As the bore holes (wells) dry up, and the people and cows begin to get thirsty, the people will dig large, deep holes directly into the sand of the "dry" rivers and streams. Sometimes these holes are just a few meters deep and wide, while other times, (and especially as the dry season progresses), they go much deeper. When they hit the water table, the hole fills with that most precious resource, and they can drink... until it dries up and they have to dig again, or dig deeper. 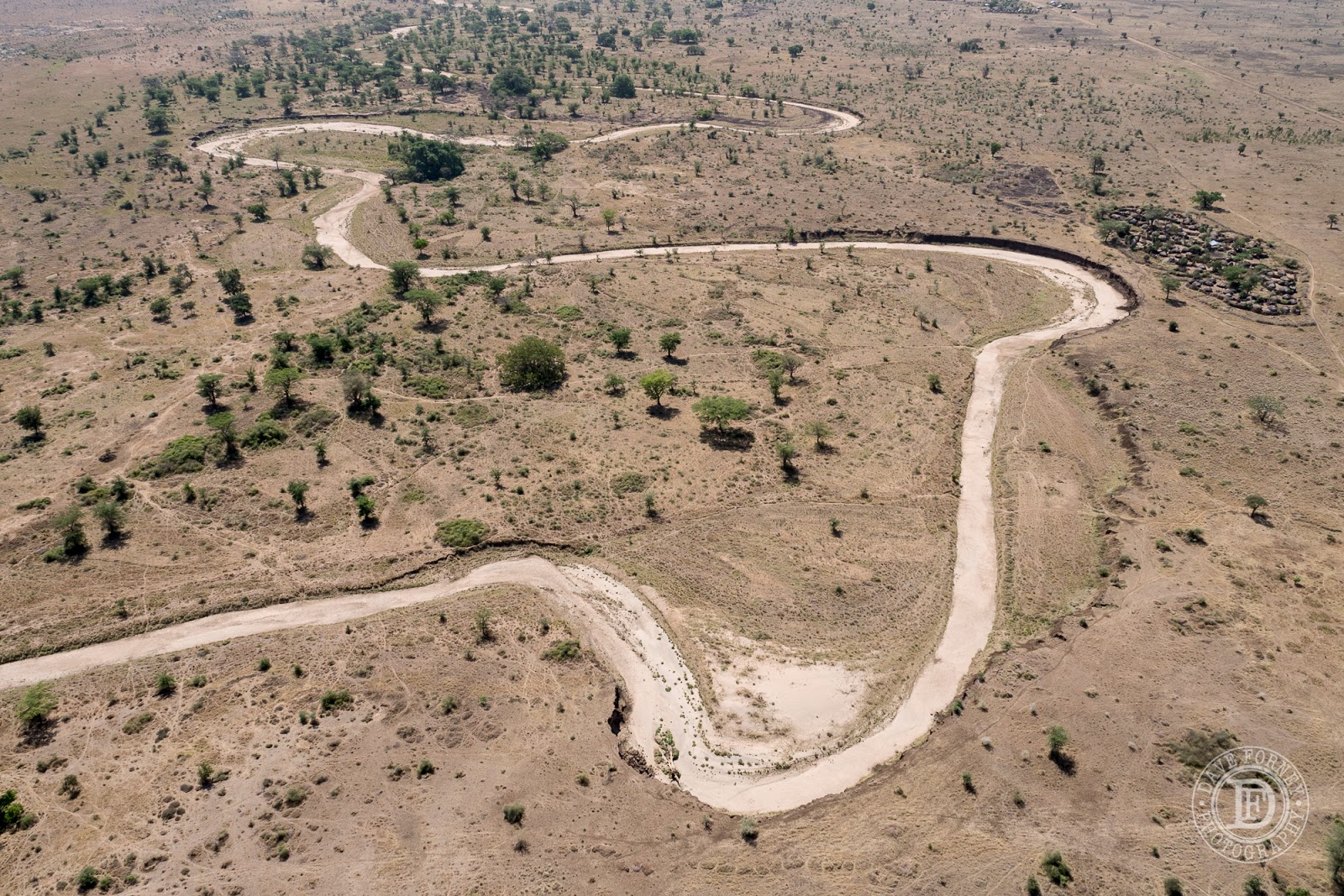 This is a very common scene these days, as we fly throughout Karamoja. Everywhere, fires are burning. People usually set the savannah grasses on fire intentionally to help control the burns, rather than having them happen on their own, uncontrolled. By the end of the dry season, the majority of the area will have been burned. The burned areas will regenerate new, richer, healthier grass when the rains finally arrive. 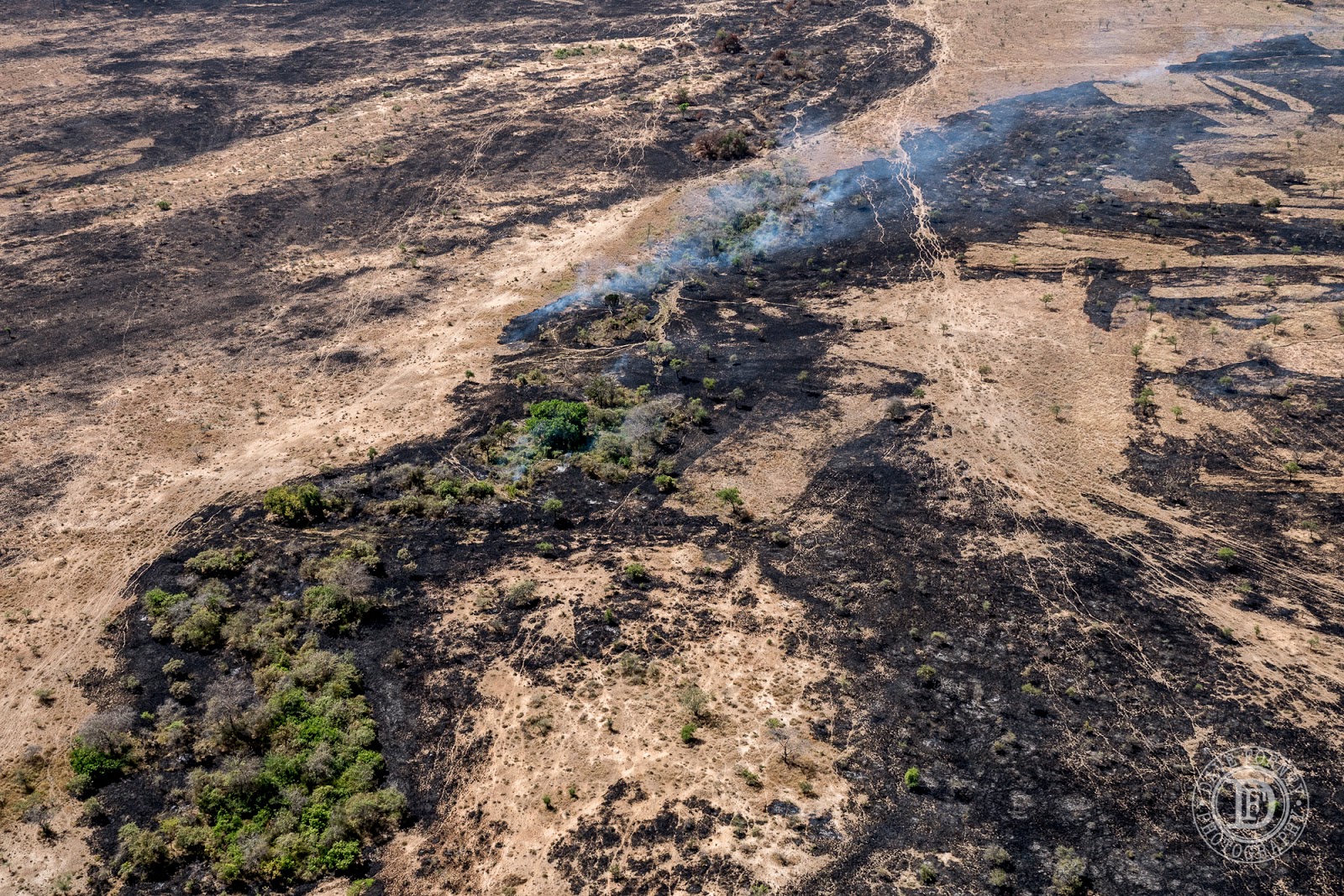 Here's a small, typical, Karamojang village, surrounded by the brown and black landscape. What is interesting is the lack of a fence around the village. In years past, you would never have seen a family group like this, without the large acacia thorn fence surrounding the perimeter. Fear of cattle raids would have been ever-present, leading to a thick, sturdy fence that would be closed at night. But more and more we're seeing villages that are foregoing that defense, indicative of the relative peace that they now enjoy. 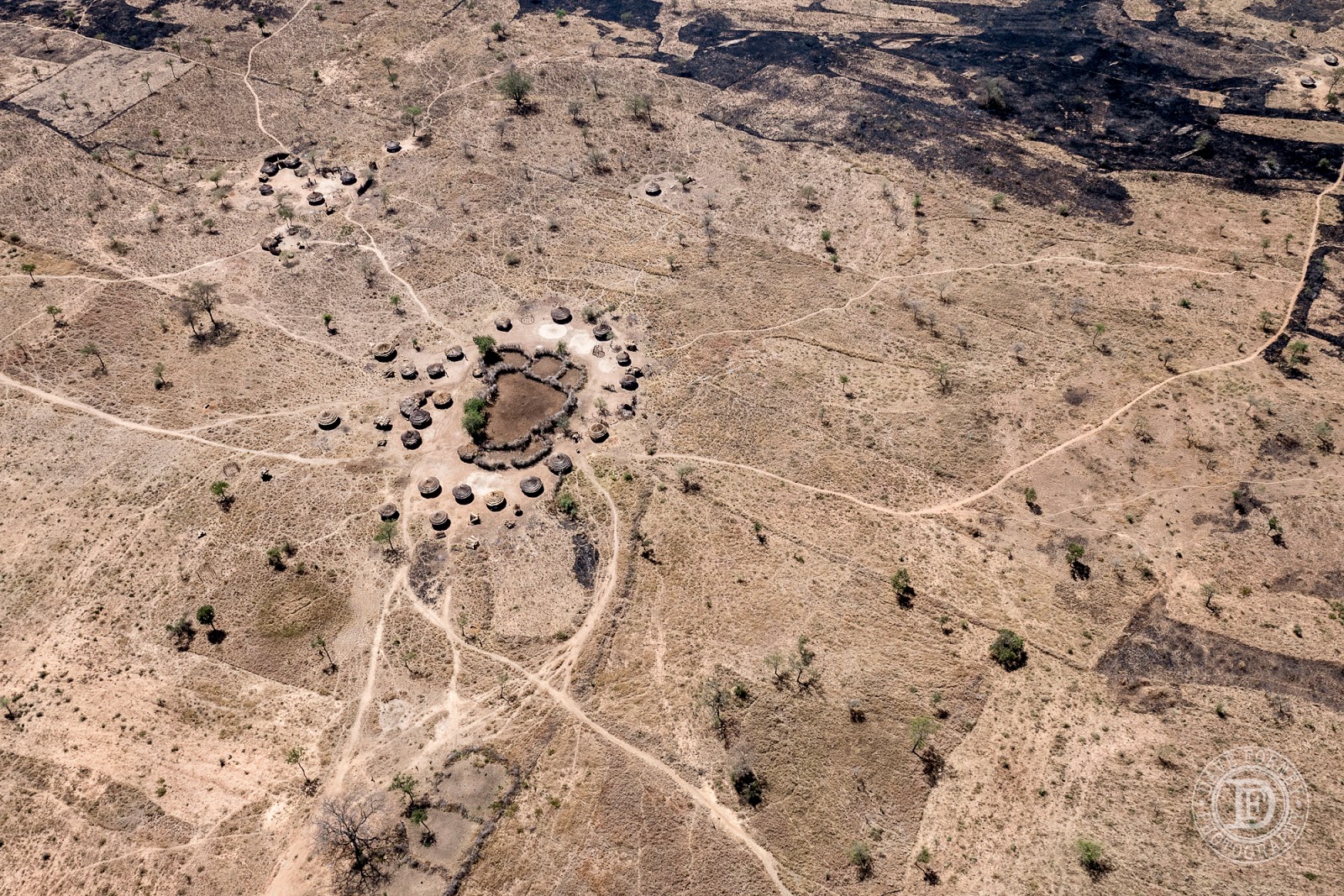 Here's an area that was burned at the very beginning of the dry season. Rather than the harsh black that you see in the first picture on this post, in this shot you can see that the ground has returned to more muted shades of black and brown. You can even see a hint of green showing through. Sometimes, the grass will just barely begin to shoot through the earth, and then basically wait, until the rains arrive. Once there is a good, soaking rain, sometime in late April, or May, or June... it will turn green almost overnight. 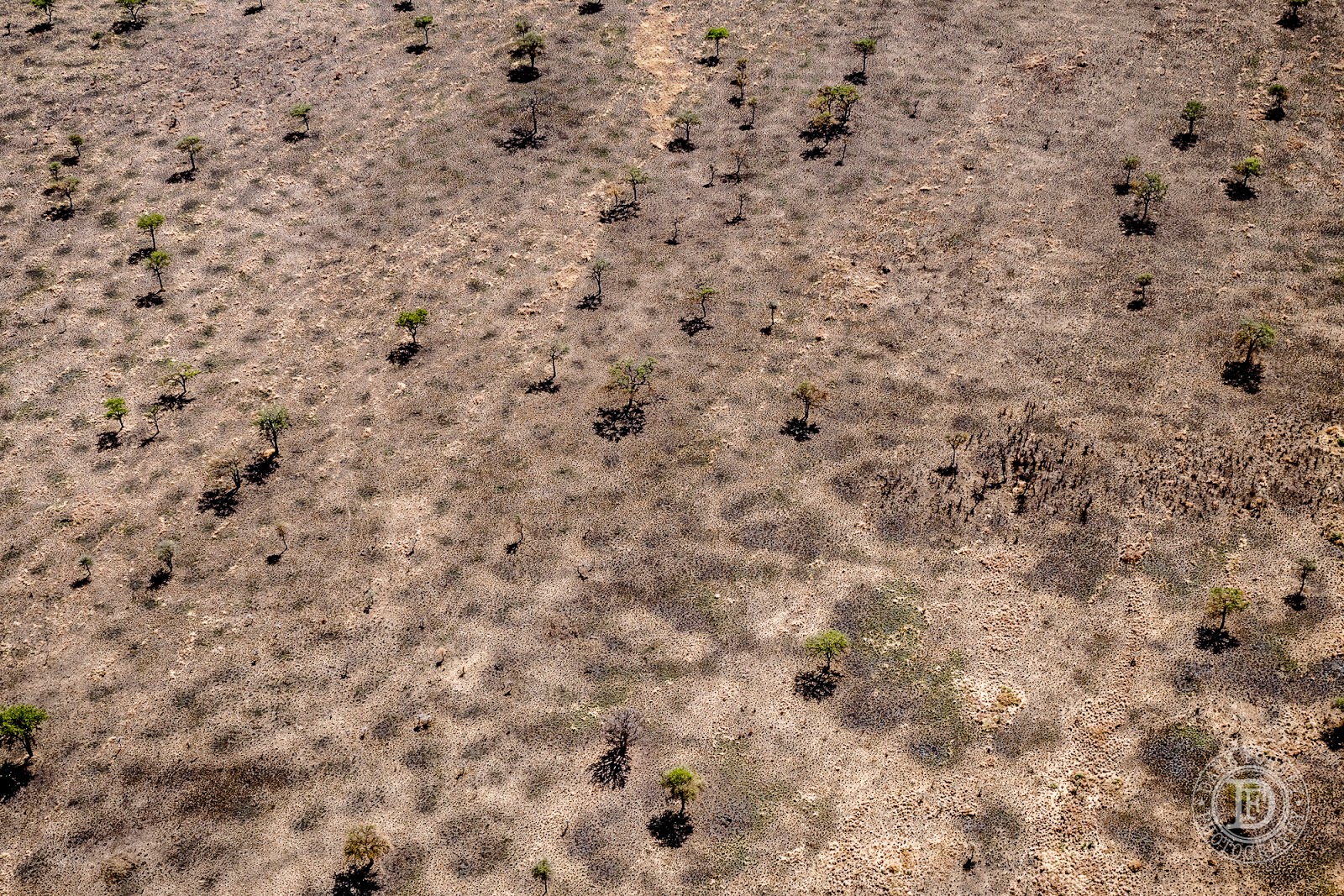 Here's a shot taken much closer to Soroti, where things stay greener because of the vast swamps and lakes in the area. But even here it's a lot dryer now, than in was in the wet season, and so people are burning what they can. 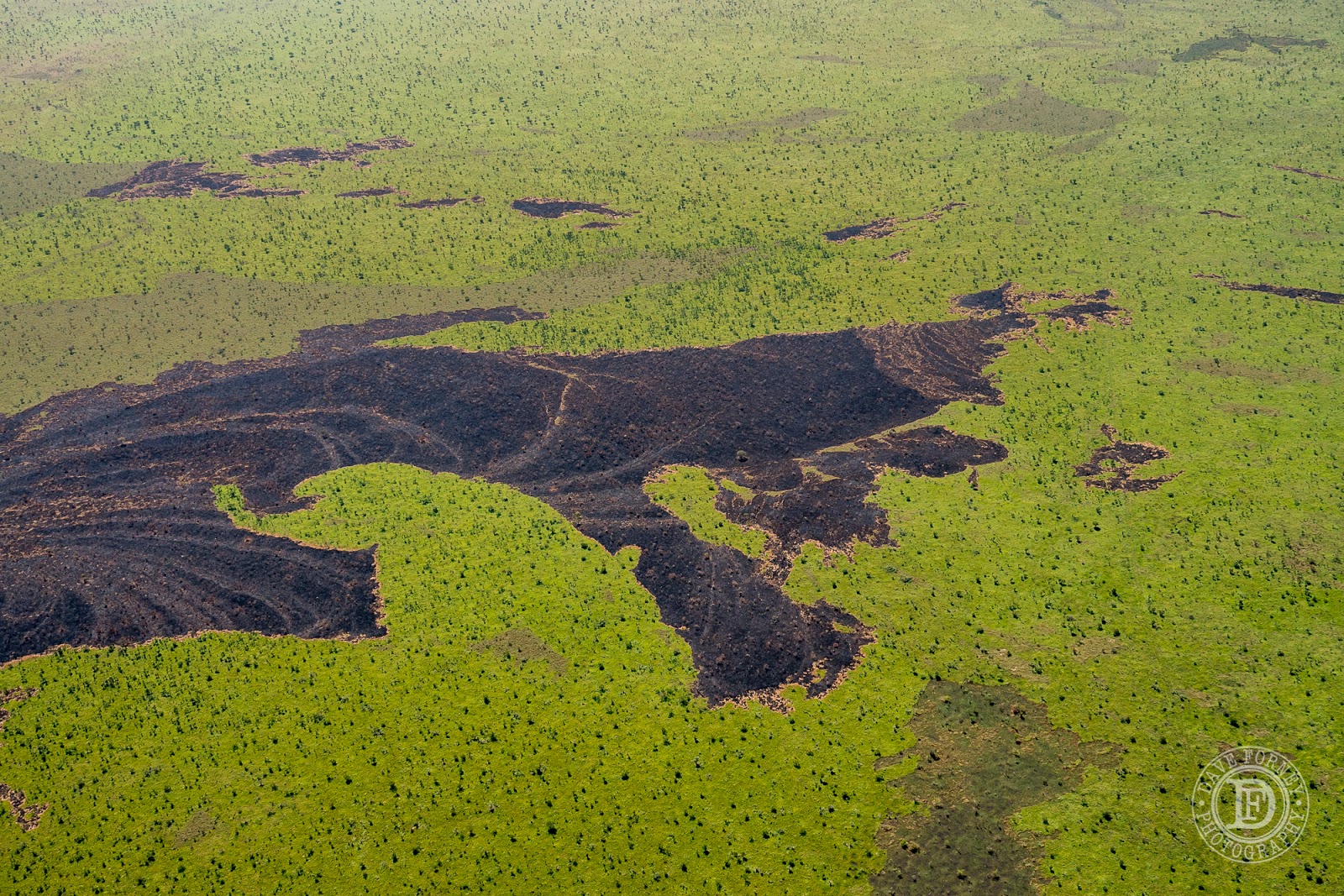 While we're on the subject of hot and dry, I thought I'd throw in this shot of Juba, South Sudan. The airstrip is barely visible, just on the horizon, between the wing tip and the little hill to the right. Often the visibility is much worse than this, in haze, dust and smoke. It can become almost like white-out conditions in a cold, snowy scene from the arctic, only this is hot, dry, and dusty. 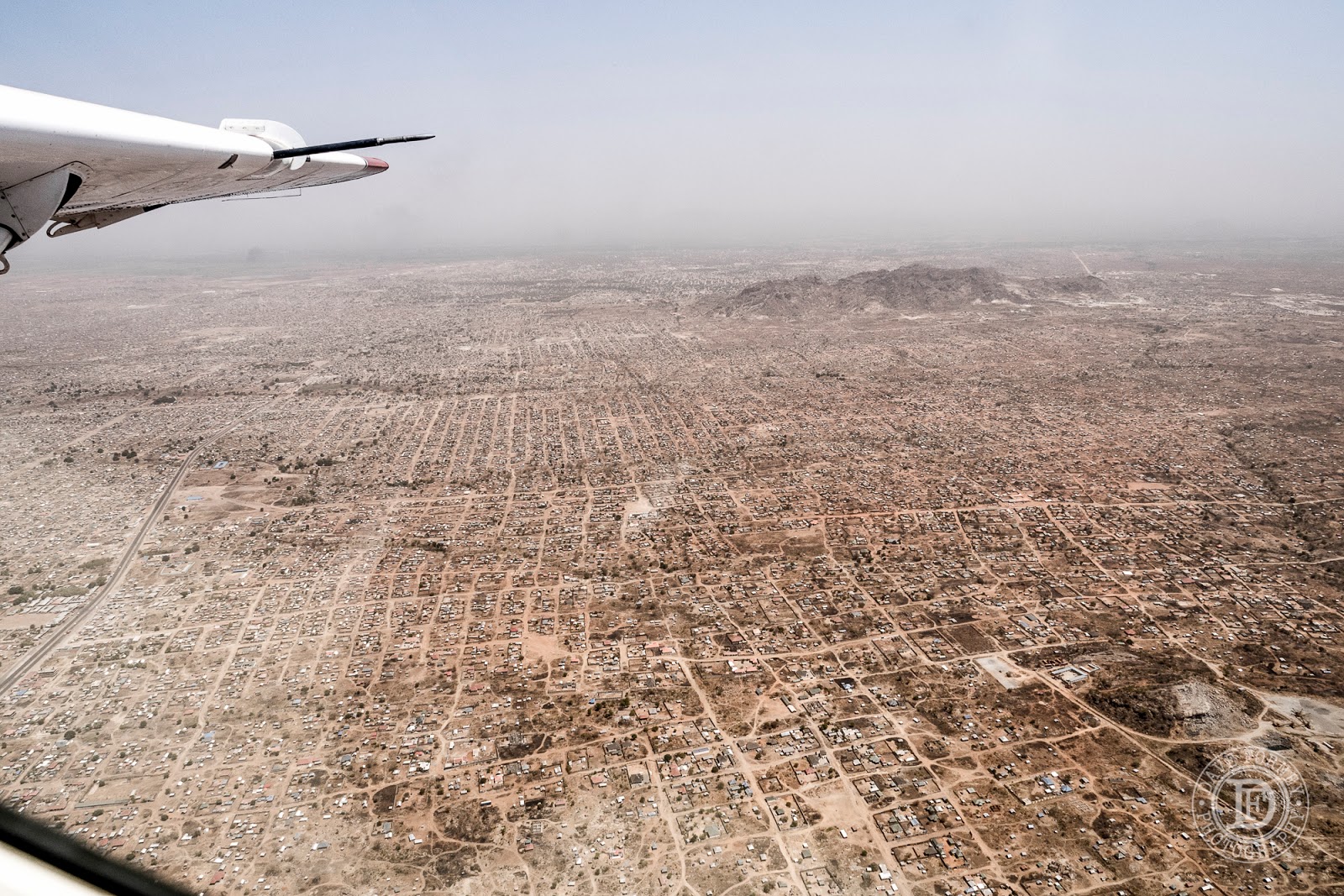 Fascinating Dave. As I looked at the pictures and "listened" to your words about them, I reflected how educational your post is. I think it was David Attenborough who said that he really did want others to care for the environment, but instead of pleading with them, he would just gently show them how beautiful nature is. Of course we all speak with emotion and pleading at certain times, but sometimes when we just give gentle factual descriptions, the words are even easier to take in. As a result, you have me caring about the effects of the dry season (drought?) on the Ugandan people and environment.