Here's some more shots from South Sudan, during the week that I spent flying ,and hanging out with, the Every Village team. 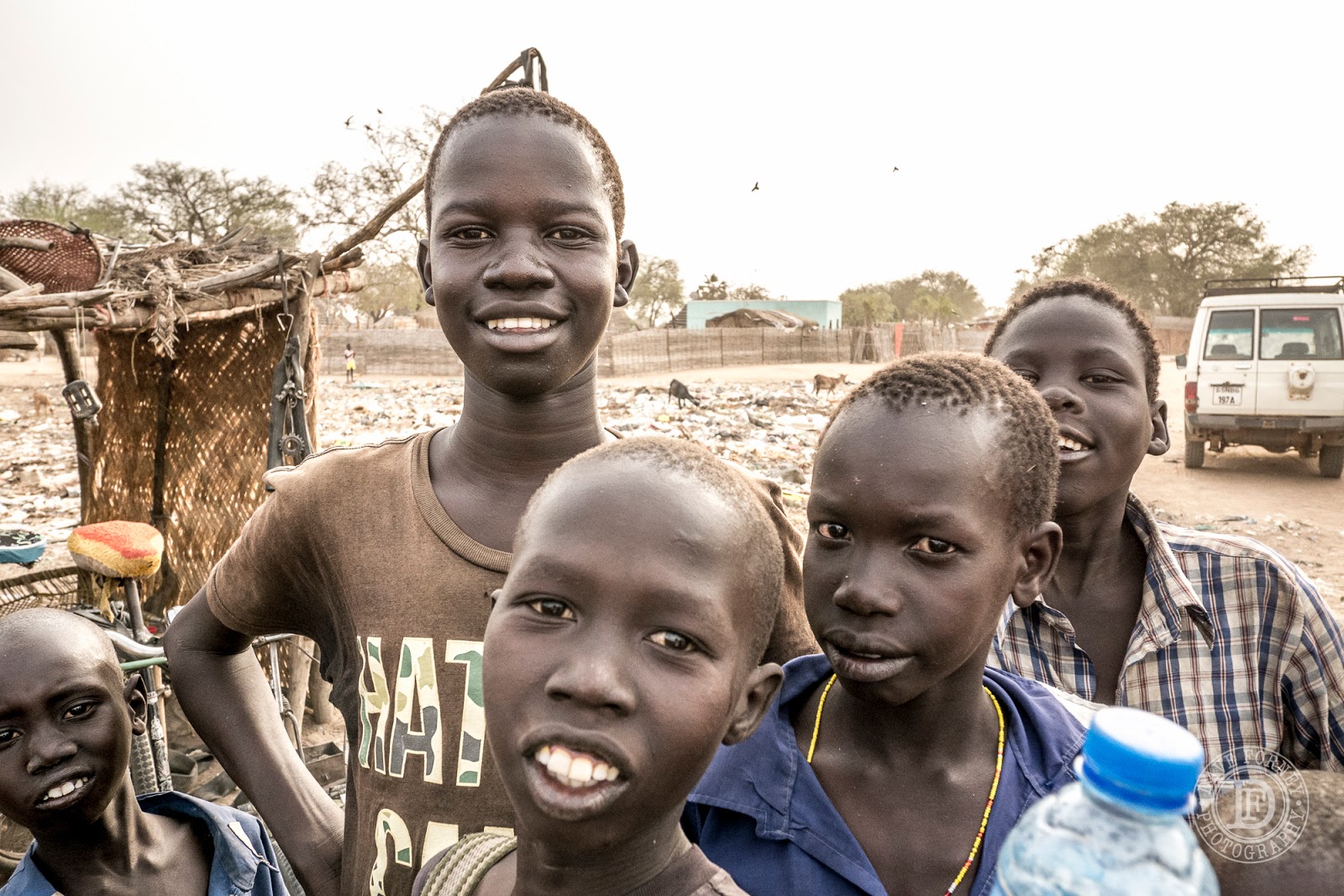 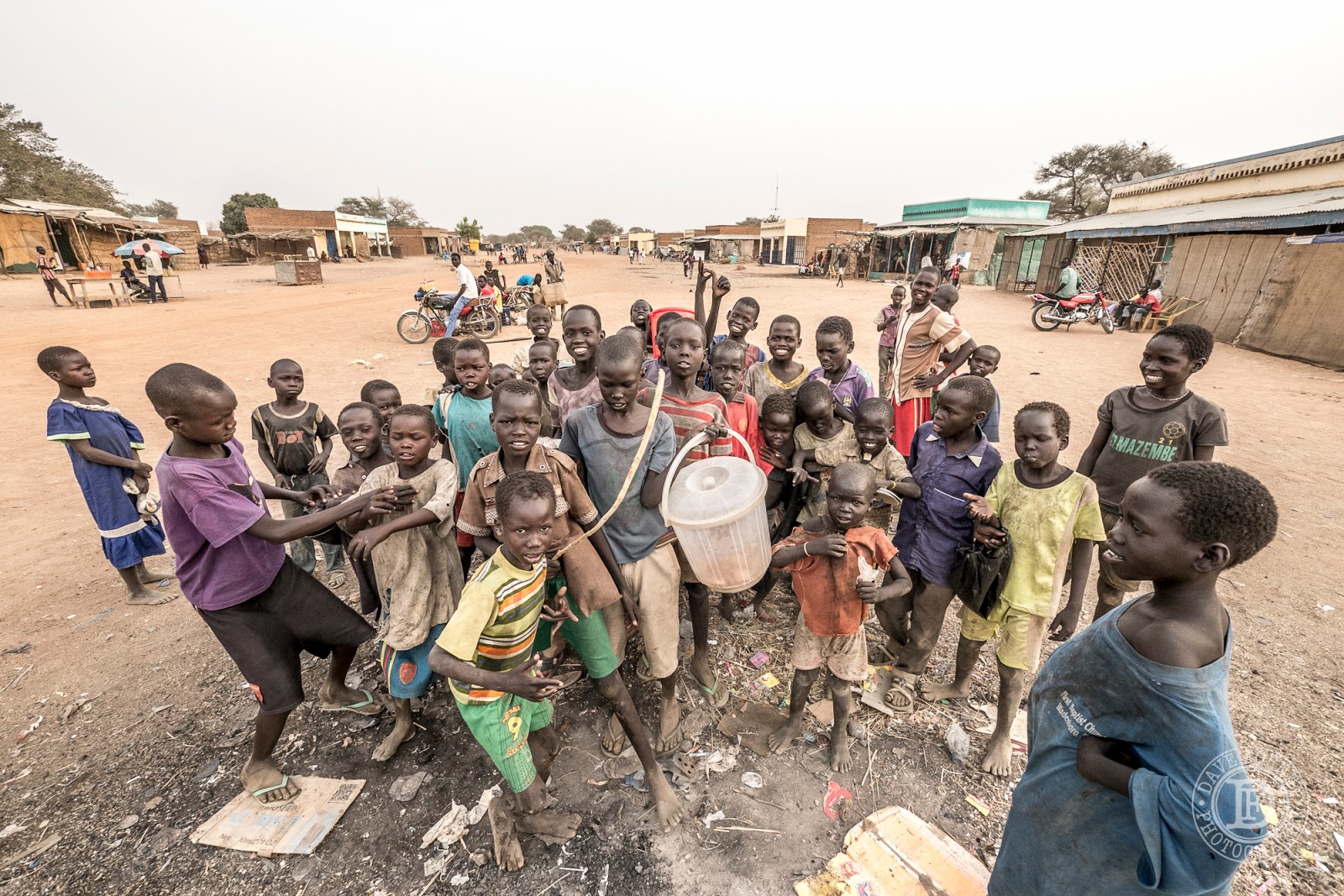 You see a lot of donkey's pulling two-wheeled carts in this area. I don't know why exactly, but I really like these donkeys. They clearly work hard, but they seem to have great attitudes...and I think they're cute. At least the ones that I saw, and patted on the head. Maybe I should trade in our van (which keeps breaking down all the time) and get a donkey instead. We could put a couch on the cart and all our kids could sit up there. Haha. 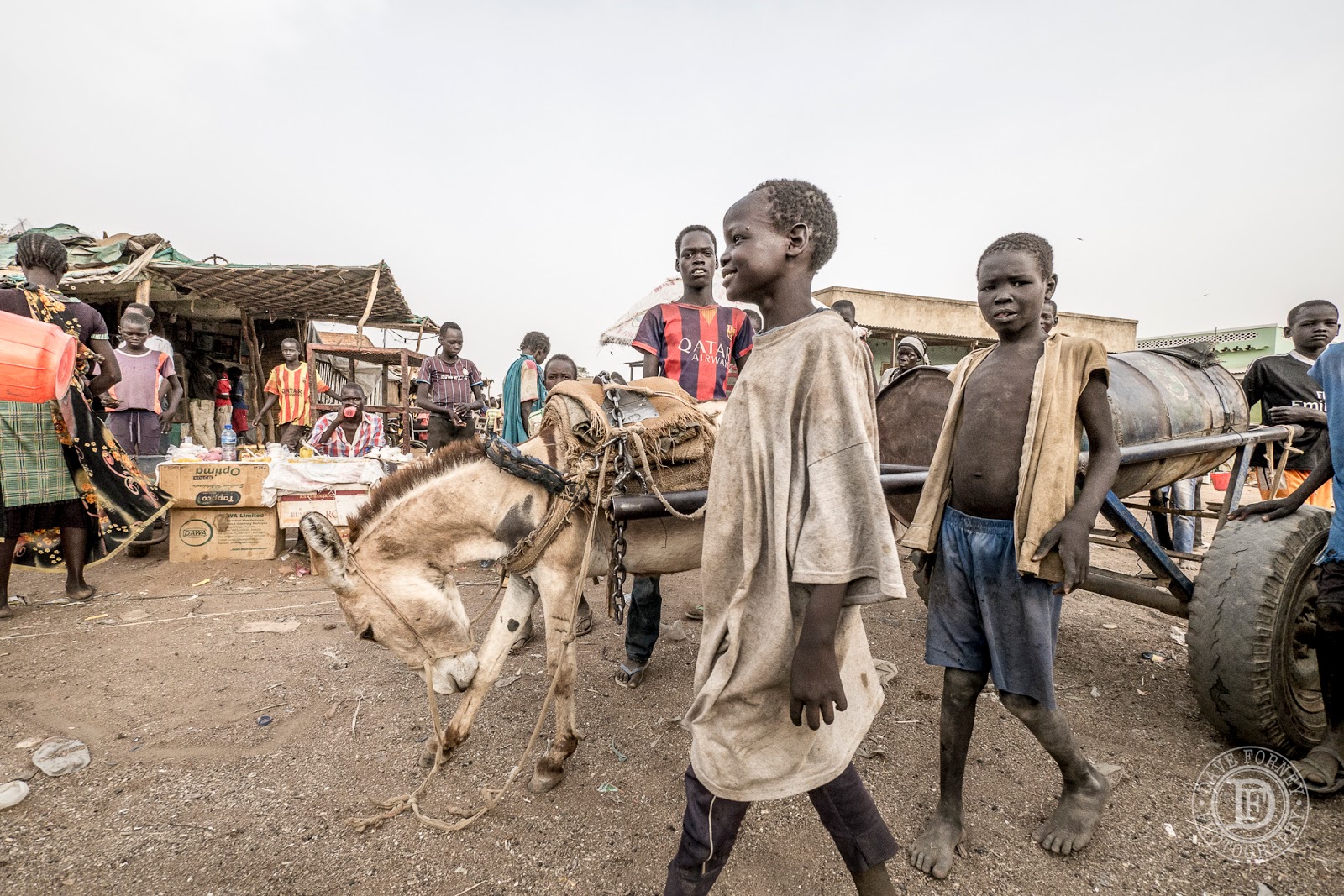 Of course, as I was taking a picture of the donkey, the kids (who were following me in a big swarm) all gathered around for a donkey candid.  The donkey seemed quite happy with all the sudden attention. Or terrified. Not sure which. :-) 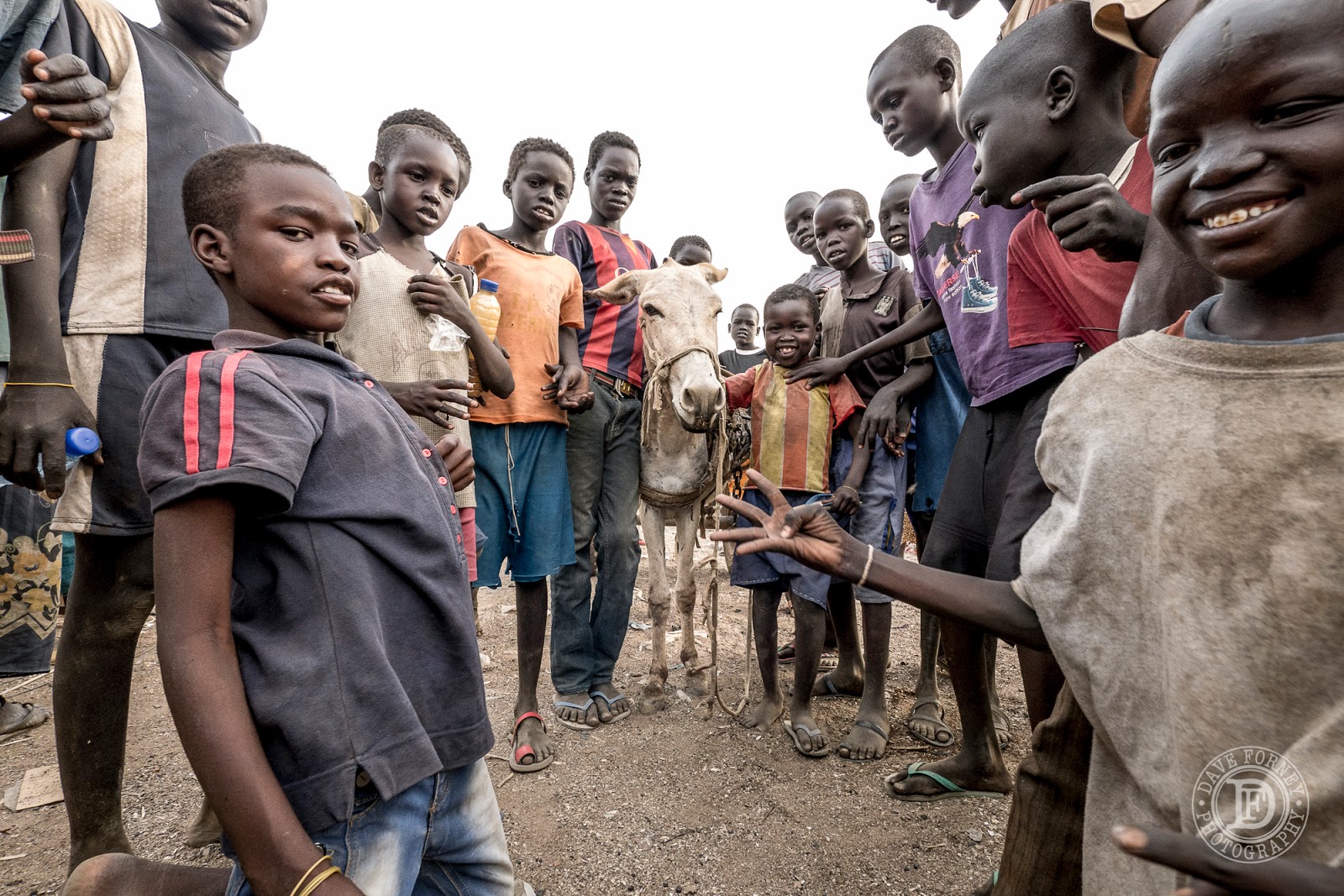 I had to show you this shot--it really captures what was going on 80% of the time, while my camera was out. In the last post I mentioned that the kids were pushing and fighting to get in the shots. That was not an exaggeration. It was pretty brutal actually. I tried really hard to make it a point to take pictures of the little kids, or the ones on the outskirts, who were too afraid, or too small, to bully their way in. But I literally had to push and shove my own way over to them, because I was in the middle of dozens of kids all the time, all wanting to have their picture taken. It felt like full-contact, tackle photography. In fact, I got knocked over a few times, when crouching down to be on eye level. 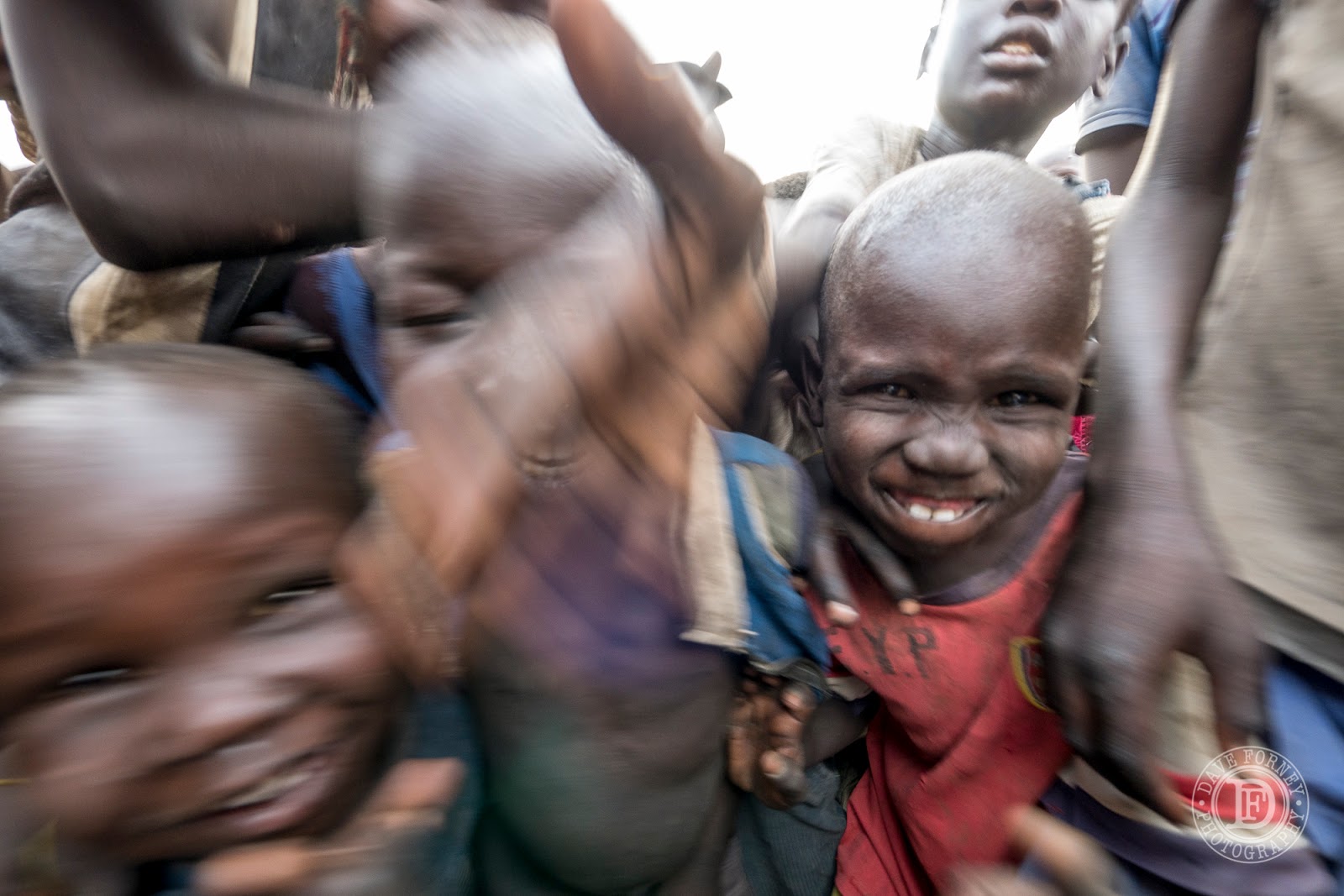 Here's a sport I know and love. It seems like kids everywhere in the world play football (not American football, but the 'real football'.) Most kids here use balled-up plastic bags, or other home-made roundish objects, but these guys were fortunate to be able to borrow a real ball from the mission school. 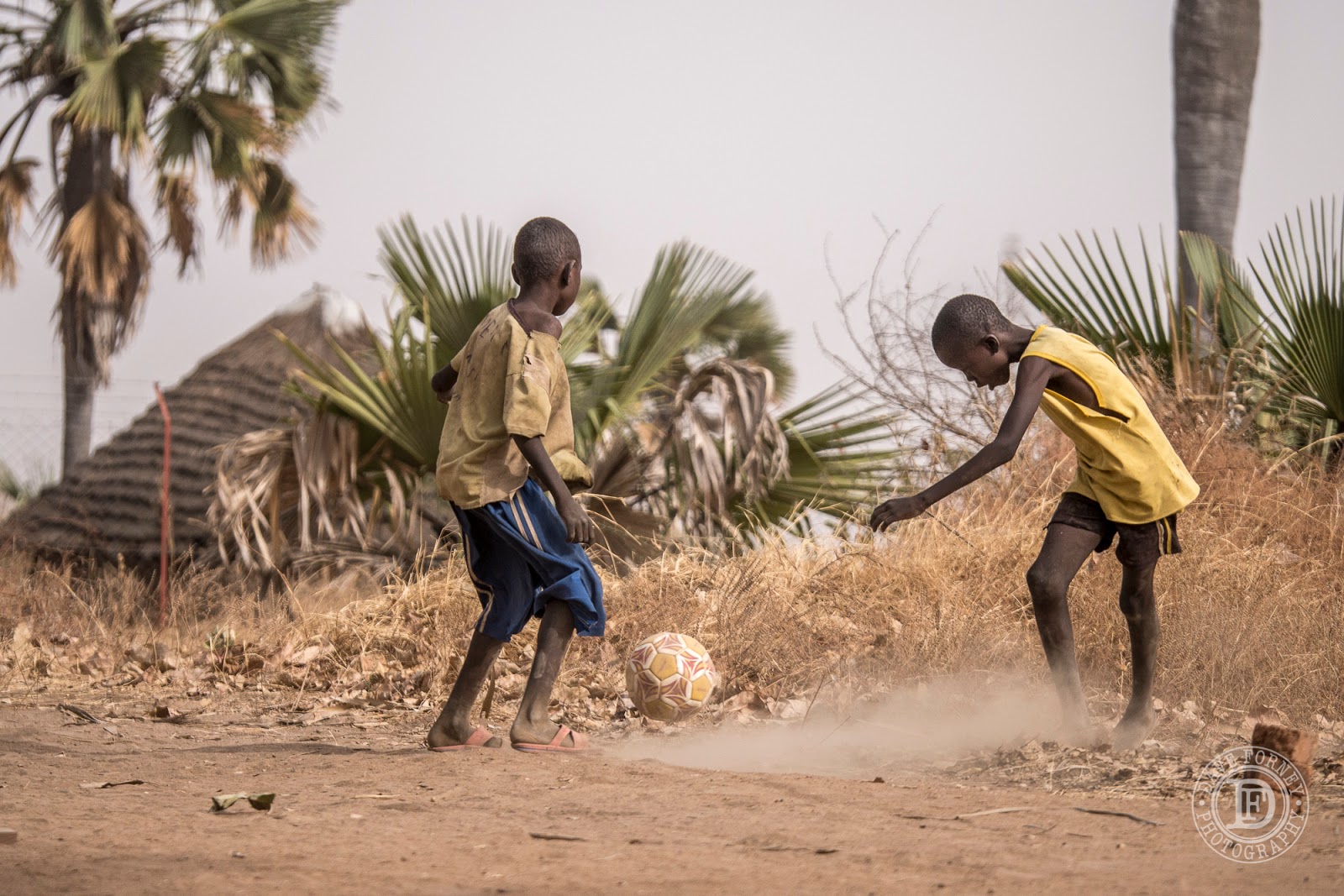 The big smiles indicate success!--success in having finally caught the chicken, which they were chasing all over their little compound. The chicken, which is hanging from the hand of the boy in front, is going to market. 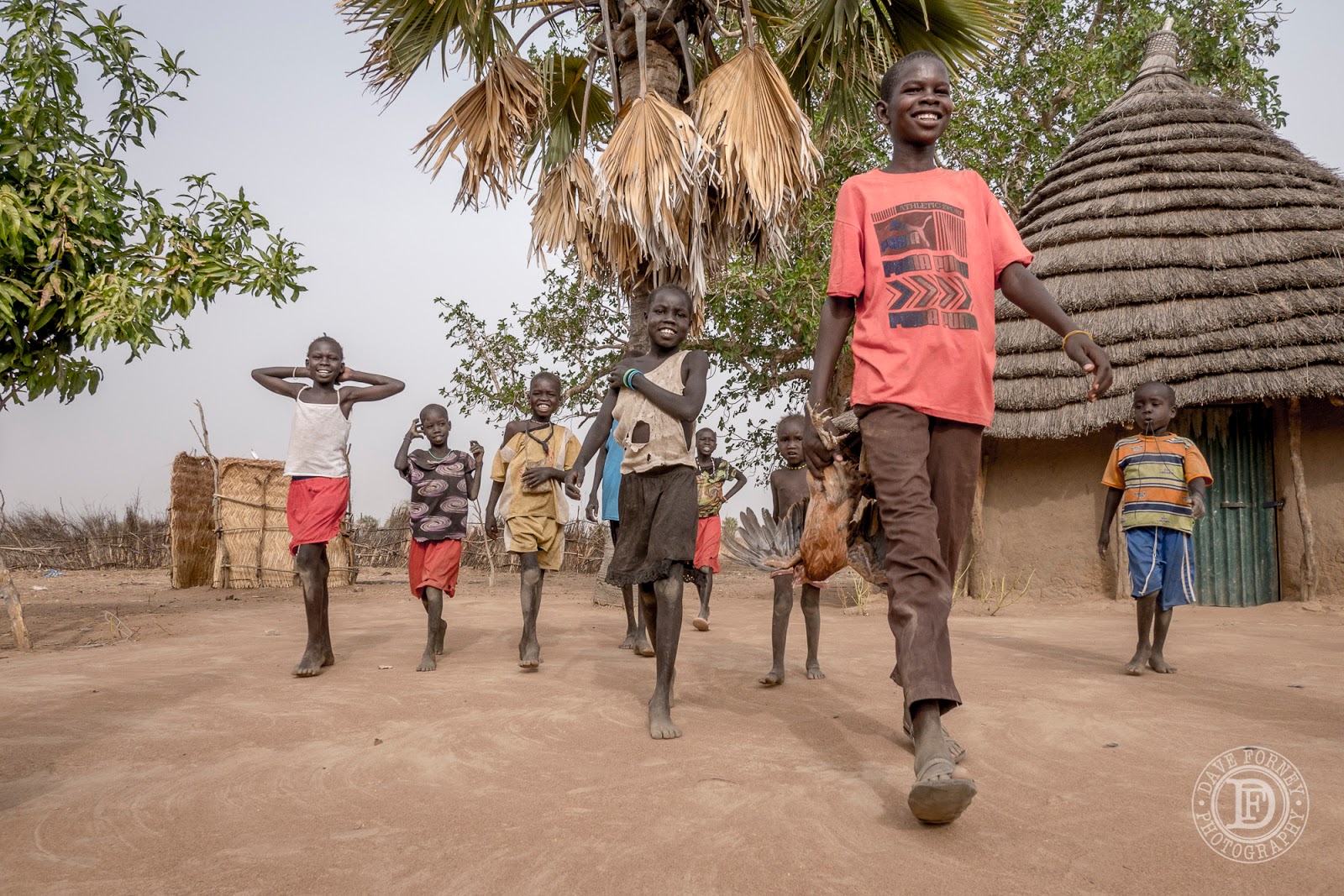 I really enjoyed my time with Every Village in Mvolo. The people there were so kind and welcoming. 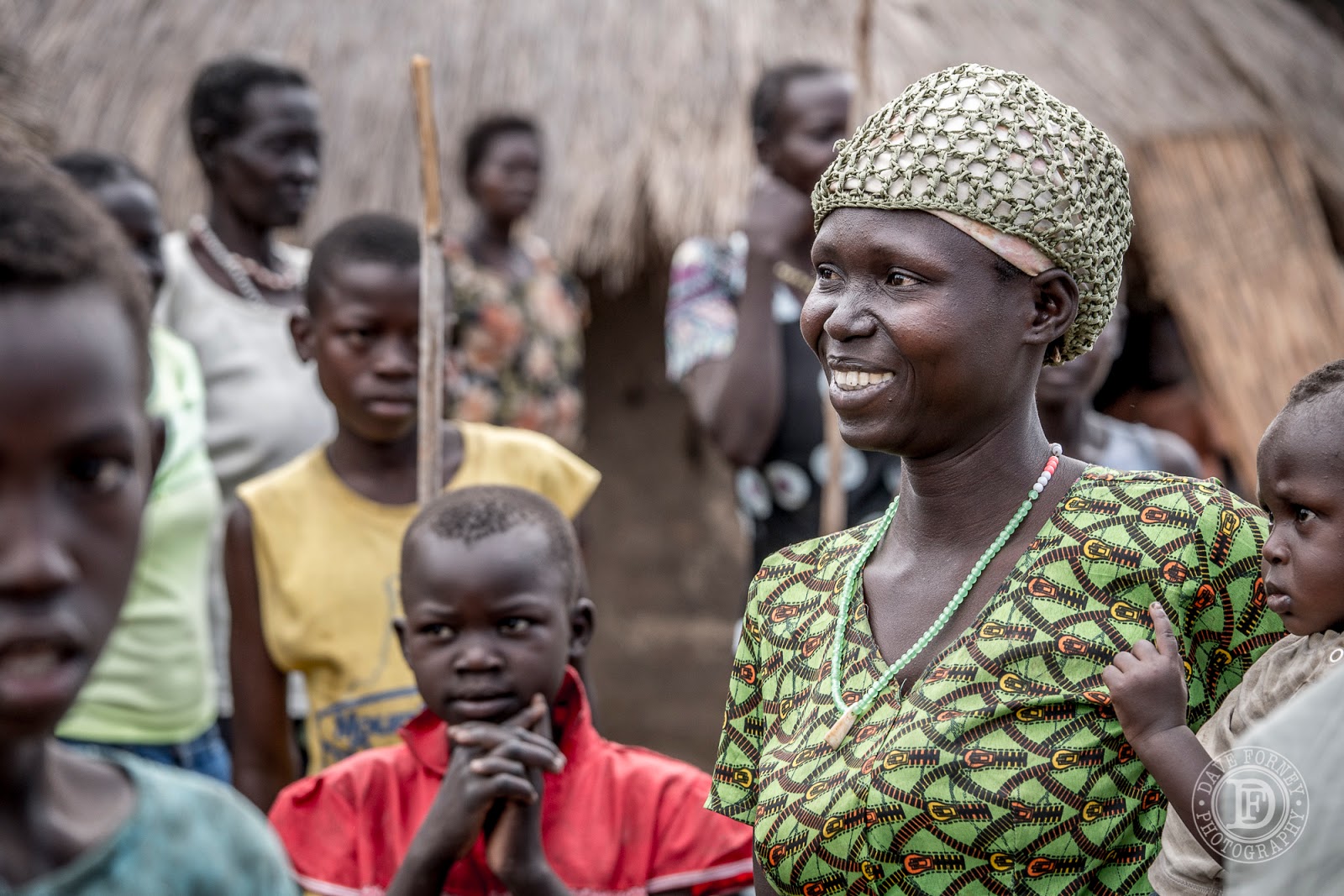 Here, the Every Village short-term team is praying with the family and friends of one of the guys (in the blue shirt) who has been helping Every Village in Mvolo. He's an amazing, invaluable guy, with a great attitude and work ethic, not to mention smile. 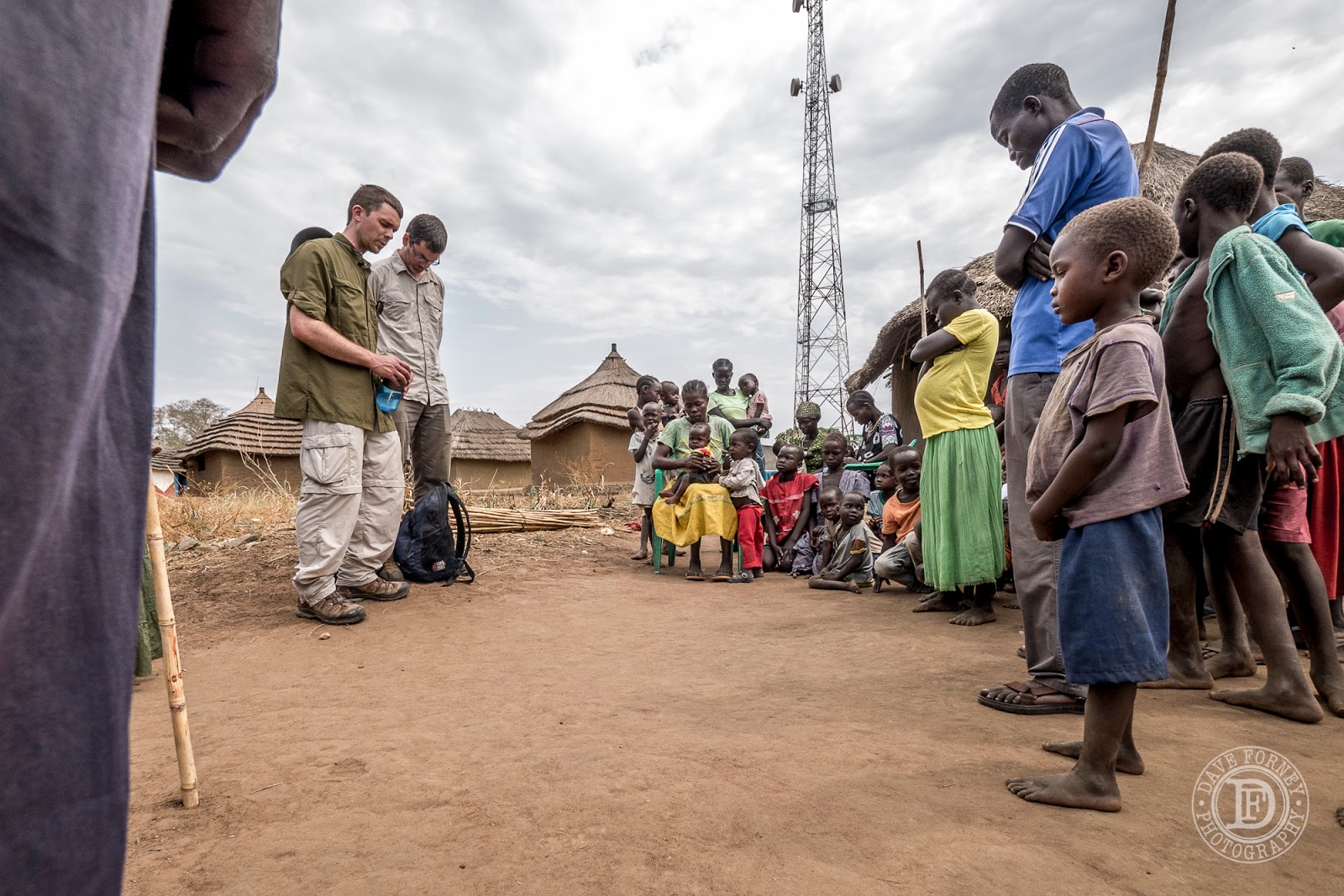 And this is his father, a very kind, elderly man, who happens to be fully blind. Each time they have a short-term team come here, they make sure to visit him at his home (that's his home behind him) and each personally greets him. He was smiling broadly the whole time, clearly honored by all the guests. 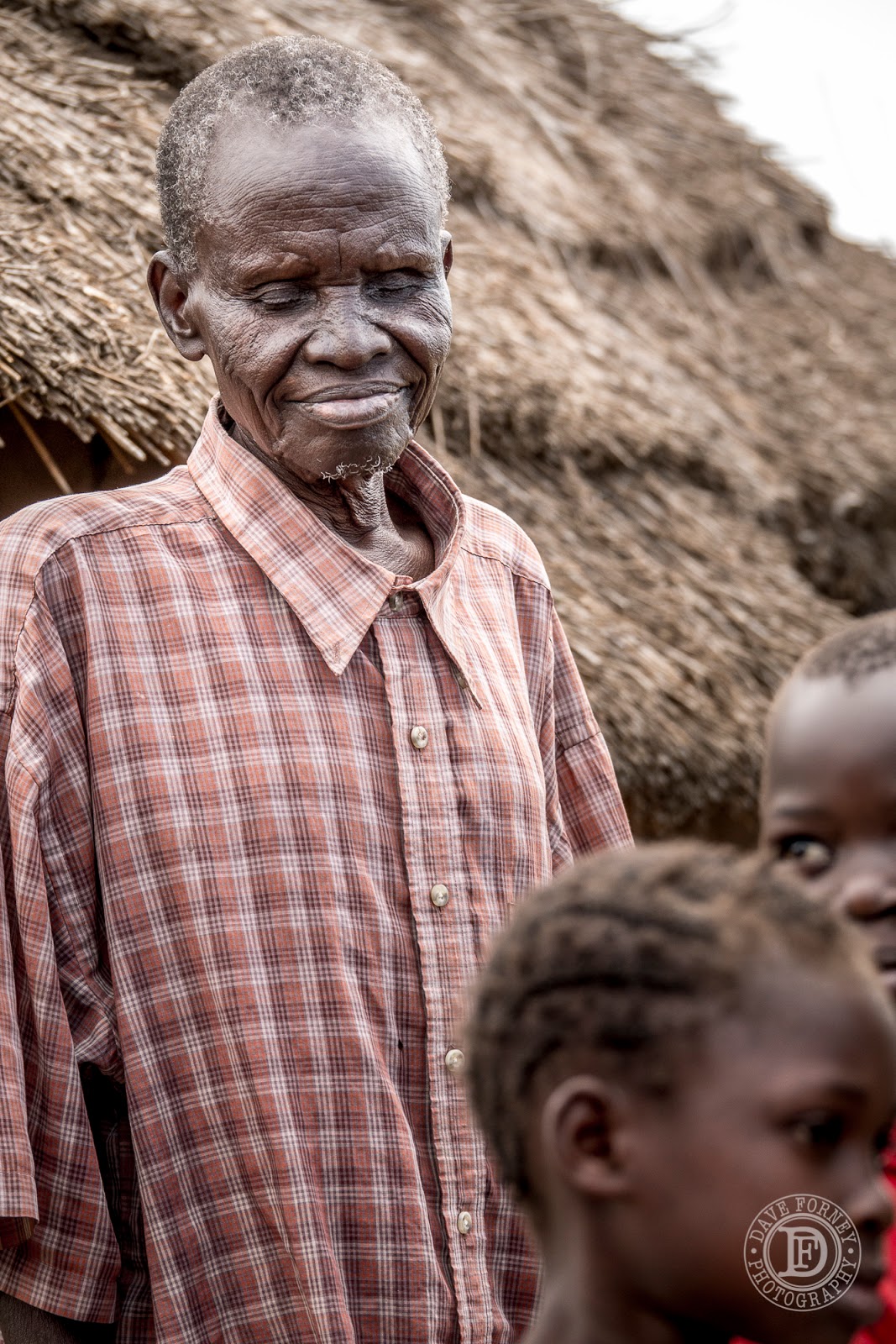 A group photo in front of his home. 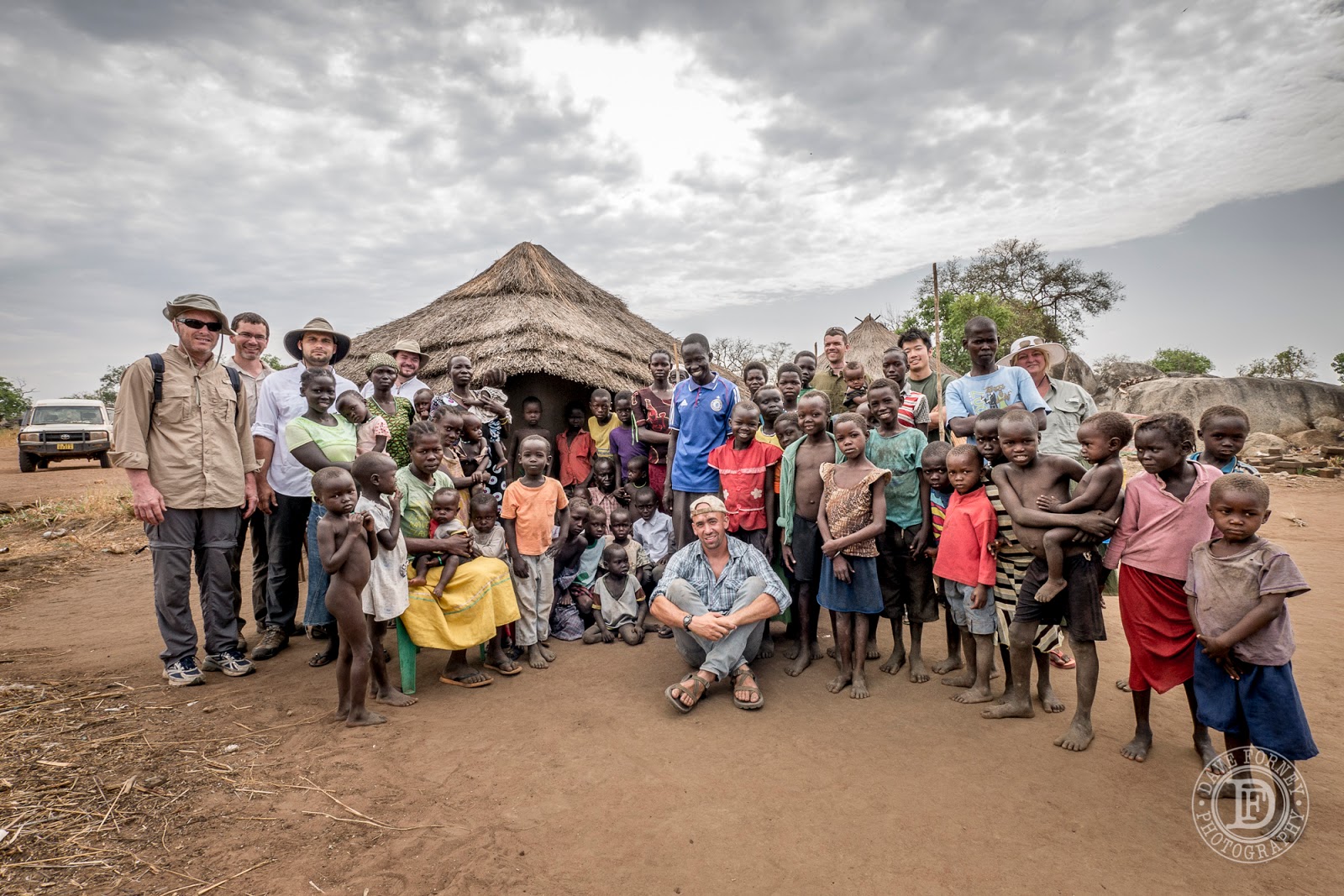 I just had to throw in a few more airplane/flying shots. Here, a crowd gathers around the plane in Mvolo. 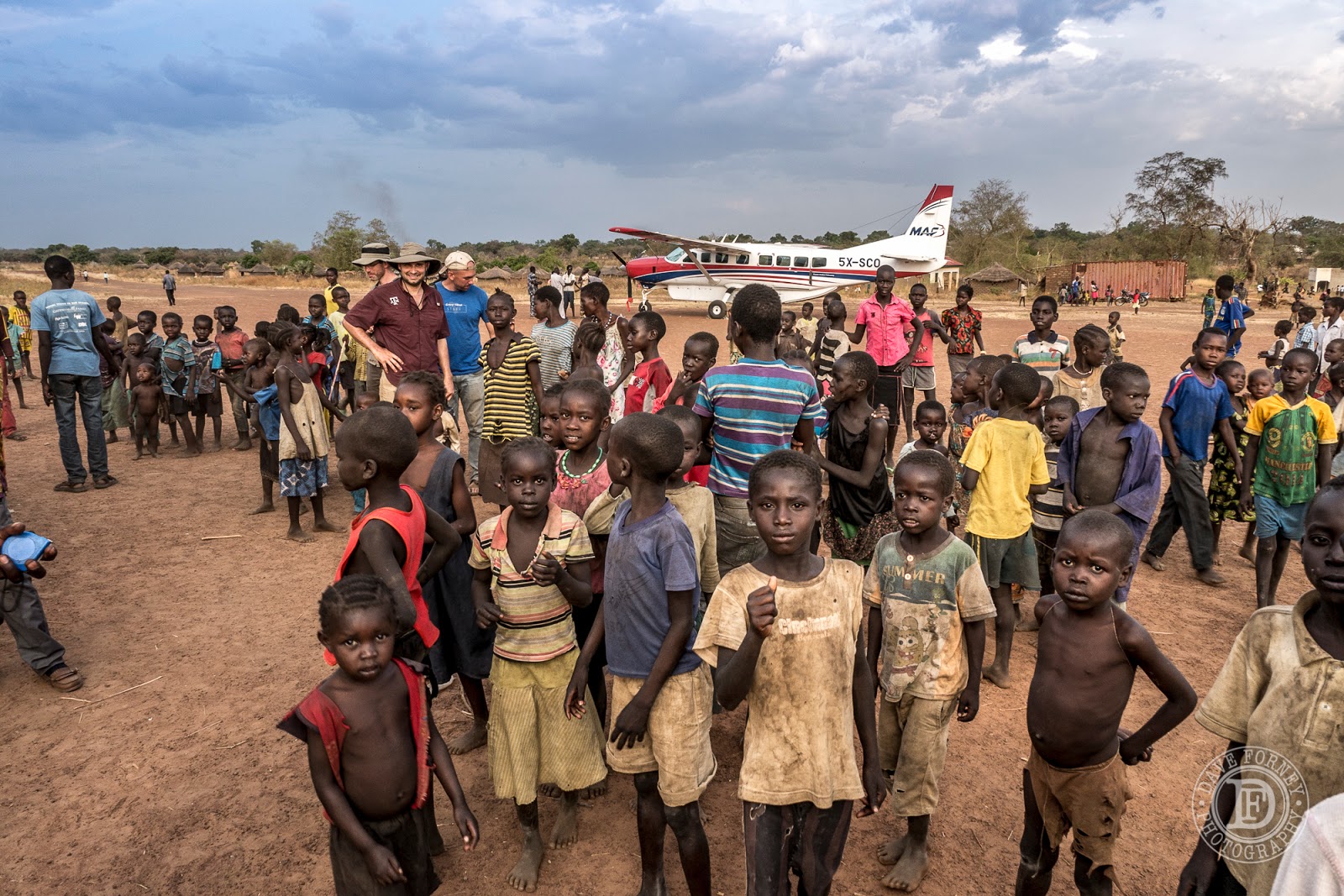 This is the Mvolo airstrip.

Much of the landscape was barren, with no trees. Or, if it had trees, they were scorched from the fires. 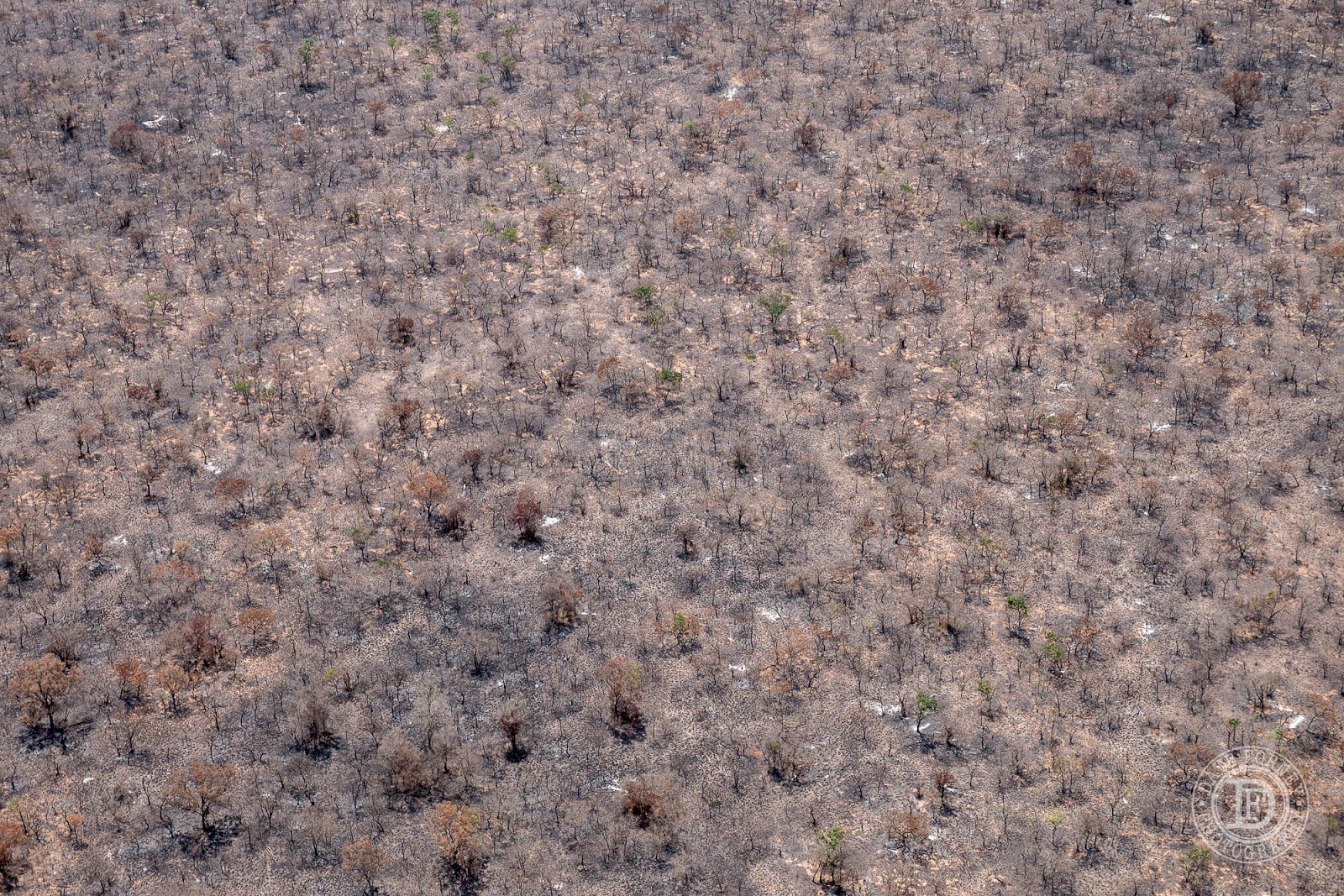 That little greenish ribbon through the middle of the photo is a seasonal creek--but it still holds moisture, and that's why the cattle (all those white dots) congregate here. Nearby, the grass was burning furiously as I flew overhead. 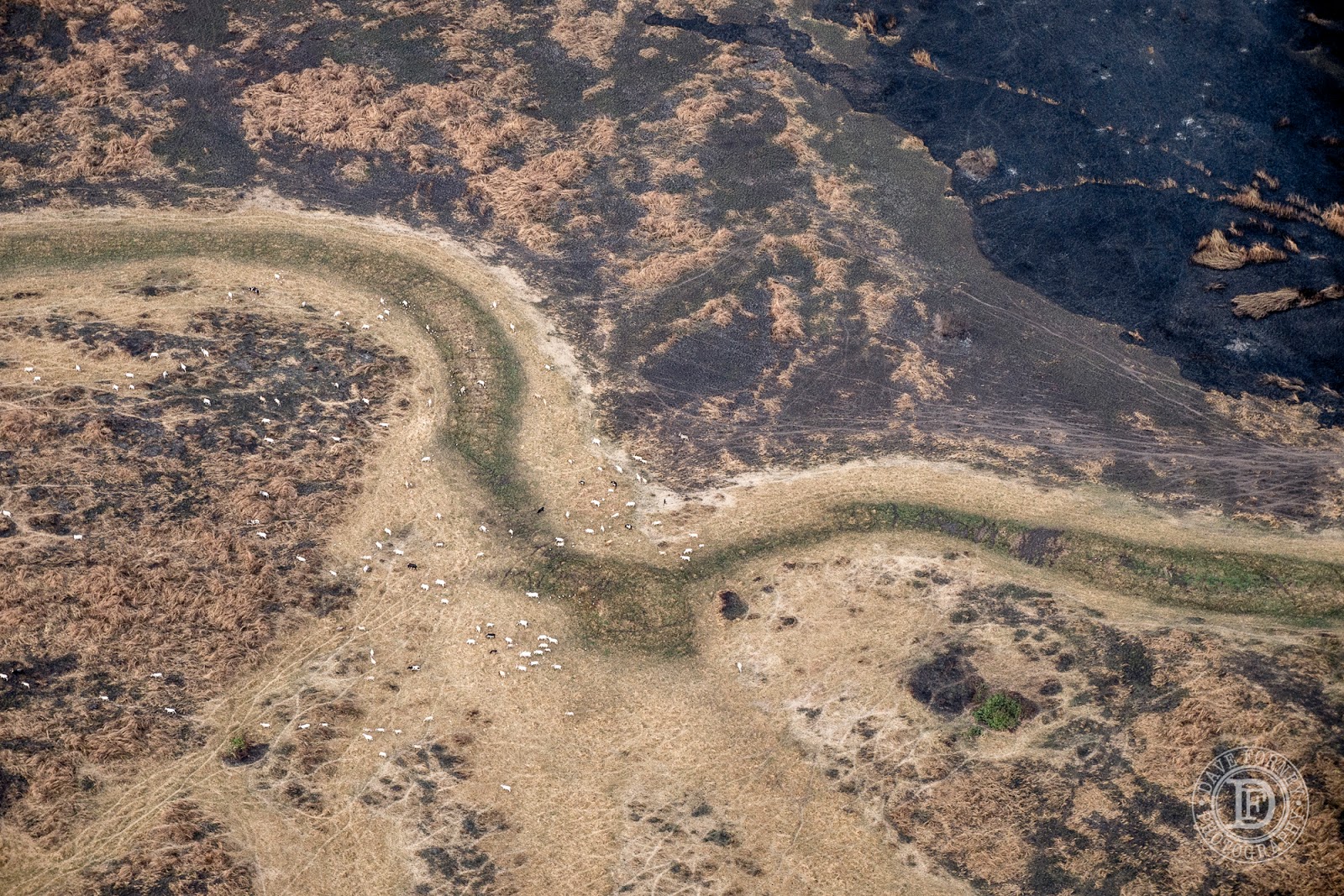 But, not far away, huge storms (the first of the season) pounded down rains. It will still be another month or so before the whole area gets enough water for things to start turning green again, but this is a good sign! 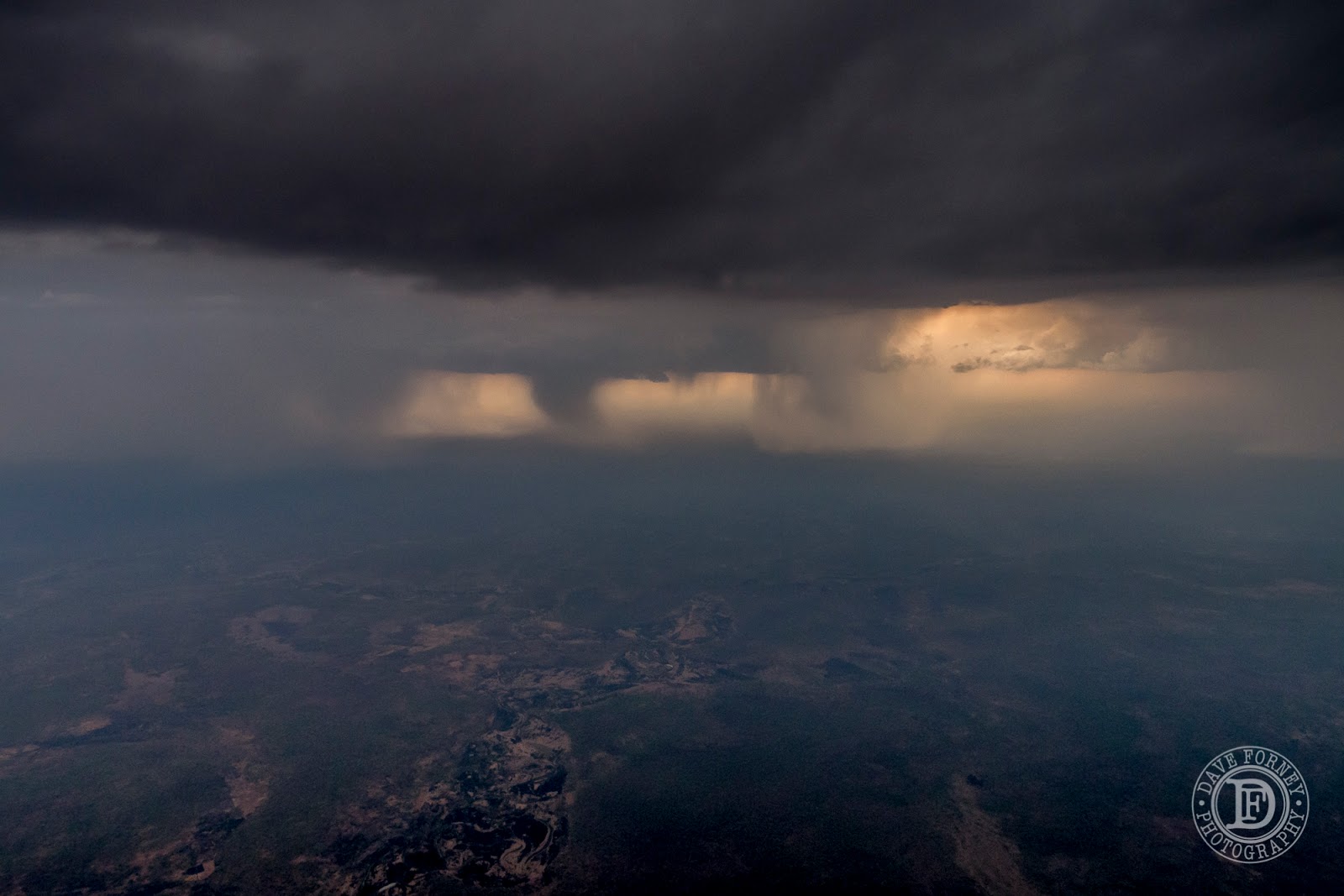 A parting shot of the plane in Mvolo. I loved how all the kids swarmed onto that big, old log, a great vantage point from which to watch the pilot put the plane to bed for the night. This is clearly not a common sight in Mvolo. I can guarantee you that if I was a child living here, I too would be perched on the log with a big smile on my face. :-) 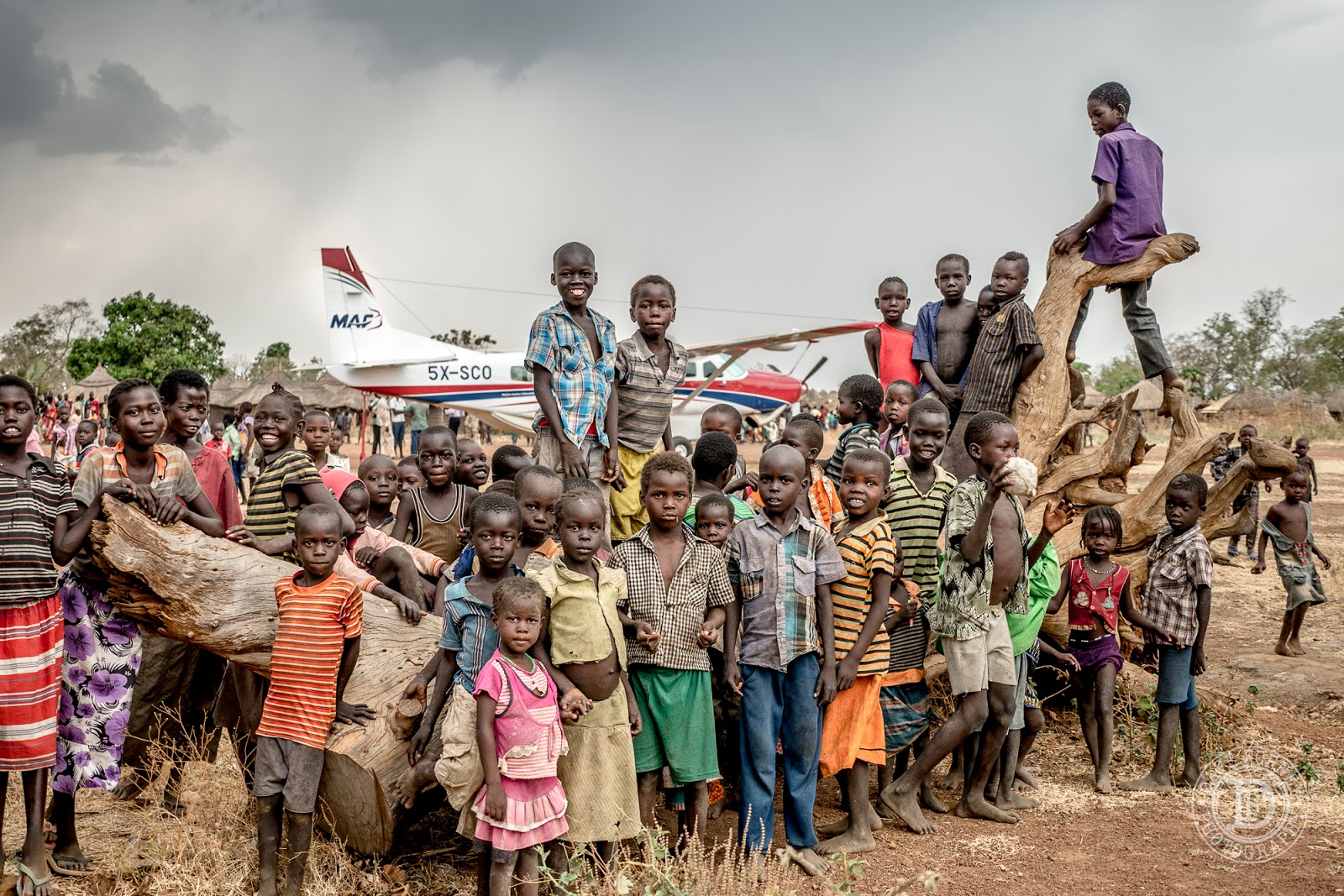