Last week I had the privilege of spending a week up in far northern South Sudan, flying around (and camping with) a really awesome partner organization, Every Village. I love this type of flying, where I get to hang out with our users, and see what they're doing, and the impact they're having. 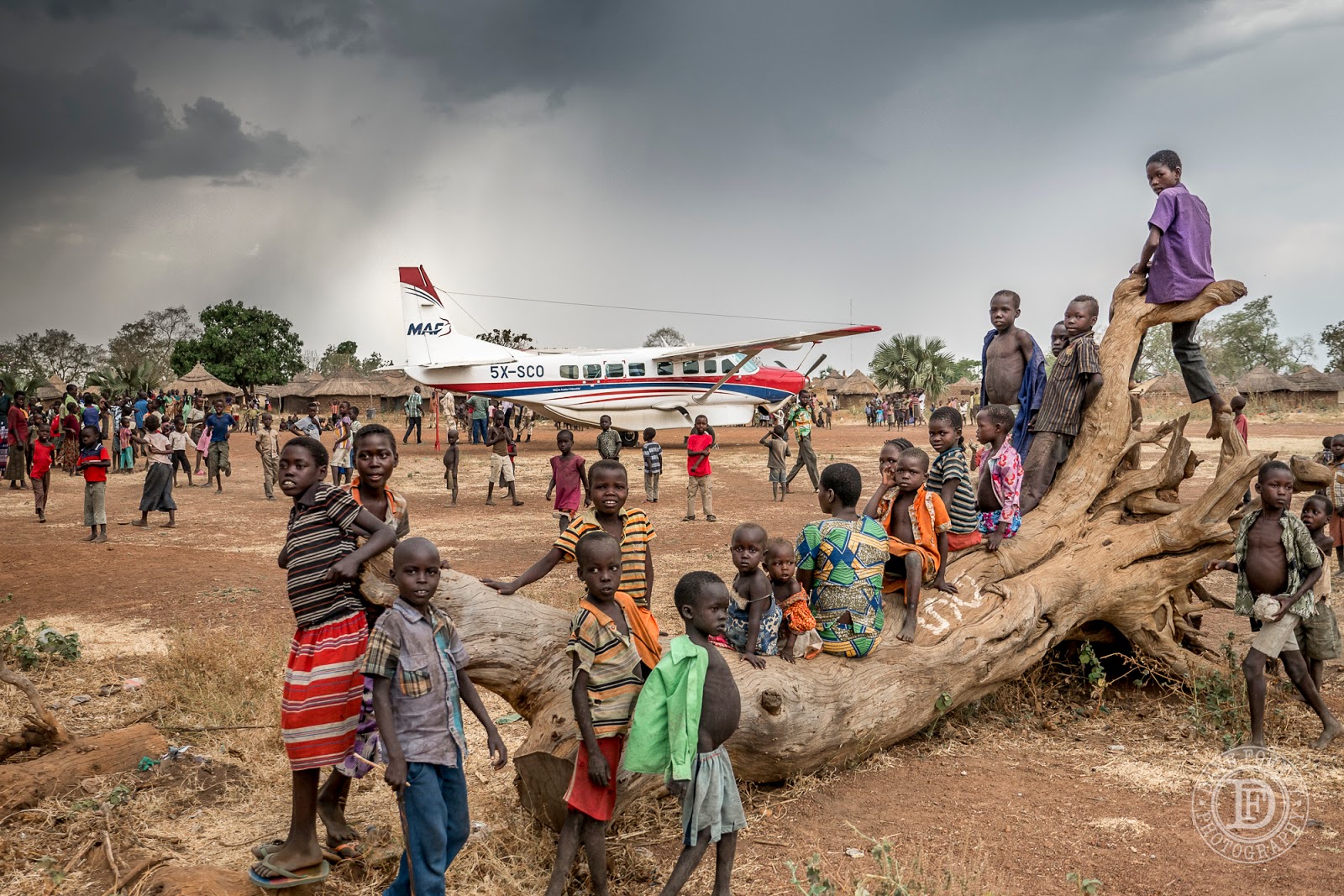 Every Village is a great organization with a unique approach to serving, ministering, and bringing the love of Jesus to people in South Sudan. They basically have a four-pronged approach. First, they do a number of short-term trips each year. These are usually groups of key folks coming in from the U.S., as was the case with the group I got to fly around and hang out with last week. Among other things, these trips provide opportunities for follow-up on previous and current projects, vision and strategizing opportunities for future projects/ministries, and encouragement to the long-term missionaries. There's a lot more to it than that, but suffice to say that the short-term trips play a big part in Every Village's strategy.

The second thing they do is to bring drinking water (by drilling wells in strategic locations) to thousands of people. You can imagine, in a parched land like this, where water is SO very scarce, the impact that this would have on the people! As they bring clean drinking water to villages, they earn trust and respect, and in so doing the doors are often open wide for them to share the Living Water as well.

That's where the third step comes in--long-term missionaries. We know most of the Every Village missionaries living 'up country' and they are really great folks! We love and respect them all. They live in the villages with the people, learn their language and culture, and share the love of Jesus. It's NOT easy by any means--it's a long-term commitment, to live a radical life with an eternal perspective.

The fourth step in the Every Village strategy is usually to introduce Christian radio, in the local language, to reach everyone in the area, no matter how poor or remote. So they erect broadcasting towers and simple recording studios in the middle of nowhere, providing tens of thousands of simple, rugged single-channel, solar-powered radios, so that everyone can hear the worship songs and teaching in their own heart language. It's a very powerful tool, that can reach hundreds of thousands of people from each radio tower, (or in the case of the station pictured below, more than a million!). One can only guess the eternal impact that the radio is having throughout South Sudan!

So now you can see why us MAF pilots love flying these Every Village people around. They're all a bunch of fun-loving, down-to-earth folks, who just happen to be living sold-out for Jesus! 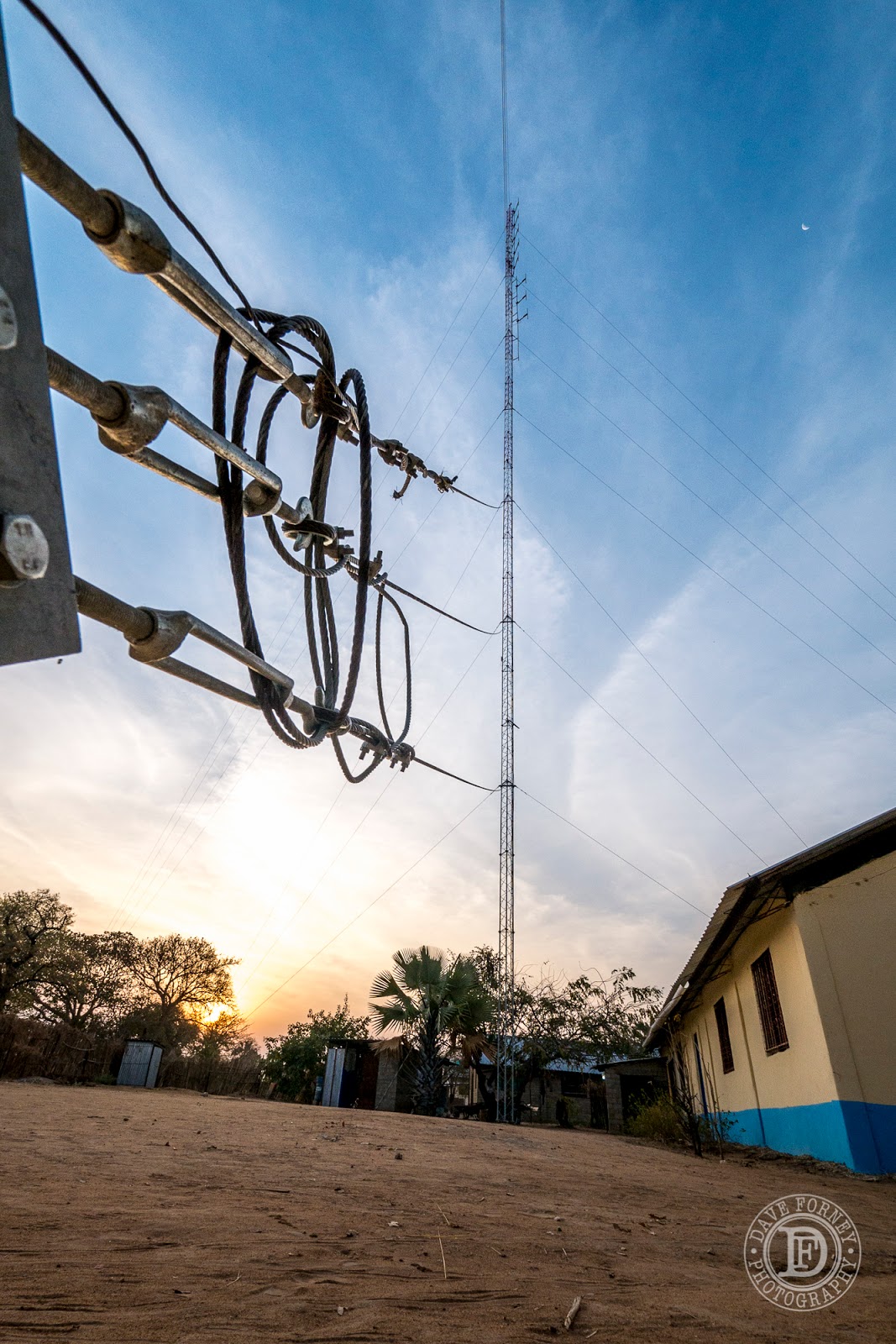 This is a typical scene in the mud-hut villages scattered all over the region, as families gather around their solar-powered, single-channel radios that have been provided by Every Village, so they can listen to the only radio station available in their local language.  The radio is the little blue device being held by the boy in the red shirt in the center. They truly love it! 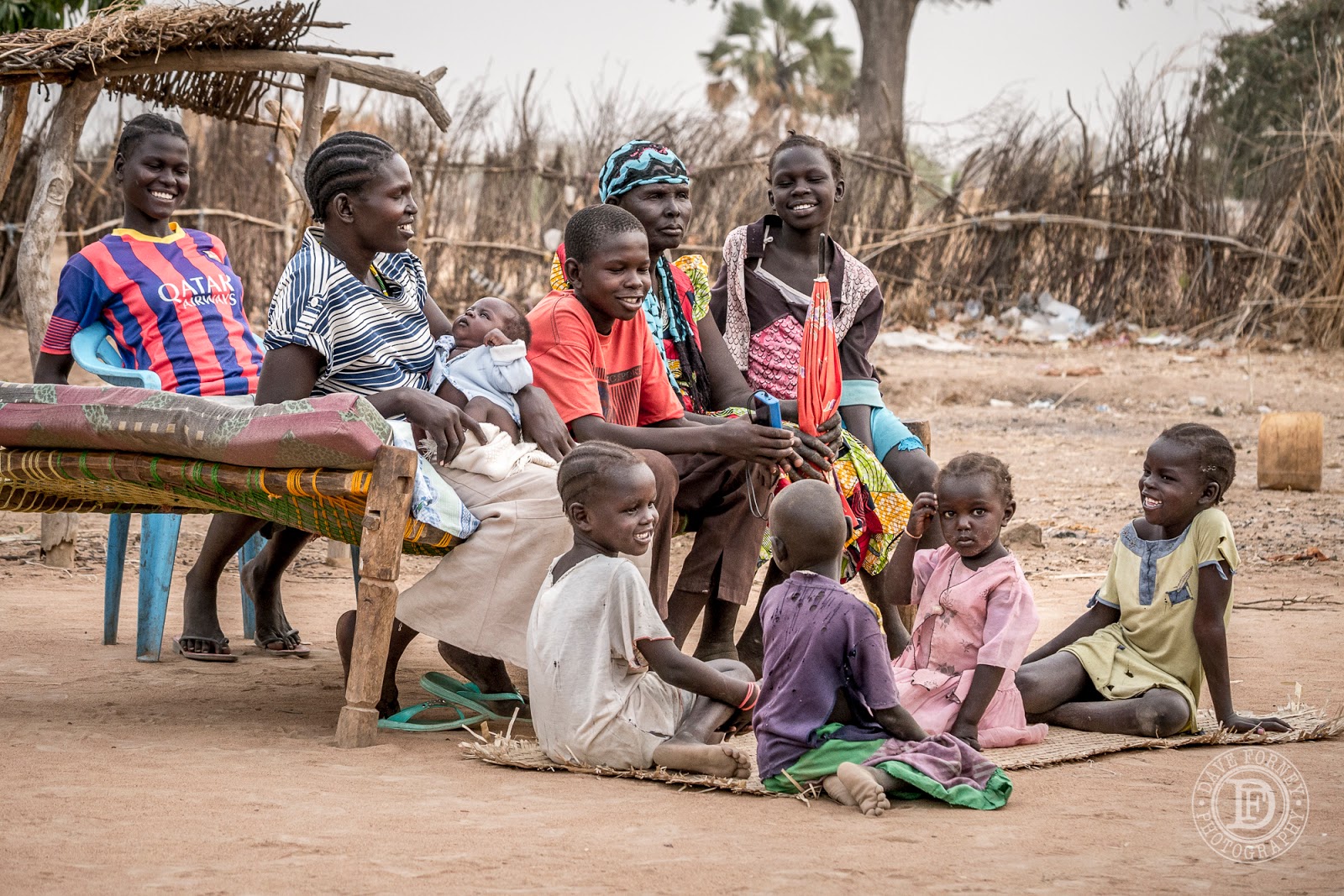 Joseph is such an inspiration to me! He's a 26 year old Kenyan, with a well-connected family, and a very good education. He could definitely be living the 'easy life' back in Nairobi, or elsewhere, enjoying a huge income and lots of public respect... if that is what he seeks. But it's not. Instead, he's living in the middle of 'nowhere' South Sudan, managing the radio station and other projects, and living in relatively primitave conditions (though I have to say he's rigged up some impressive little improvements to his humble abode.) This is a smart and motivated guy! Rarely have I met a man of his age, with so much wisdom, insight, and humility, and with such a knowledge and love of the Word. This is a guy who most definitely has an eternal perspective--laying up his treasures in heaven, rather than worrying about his riches here on earth. 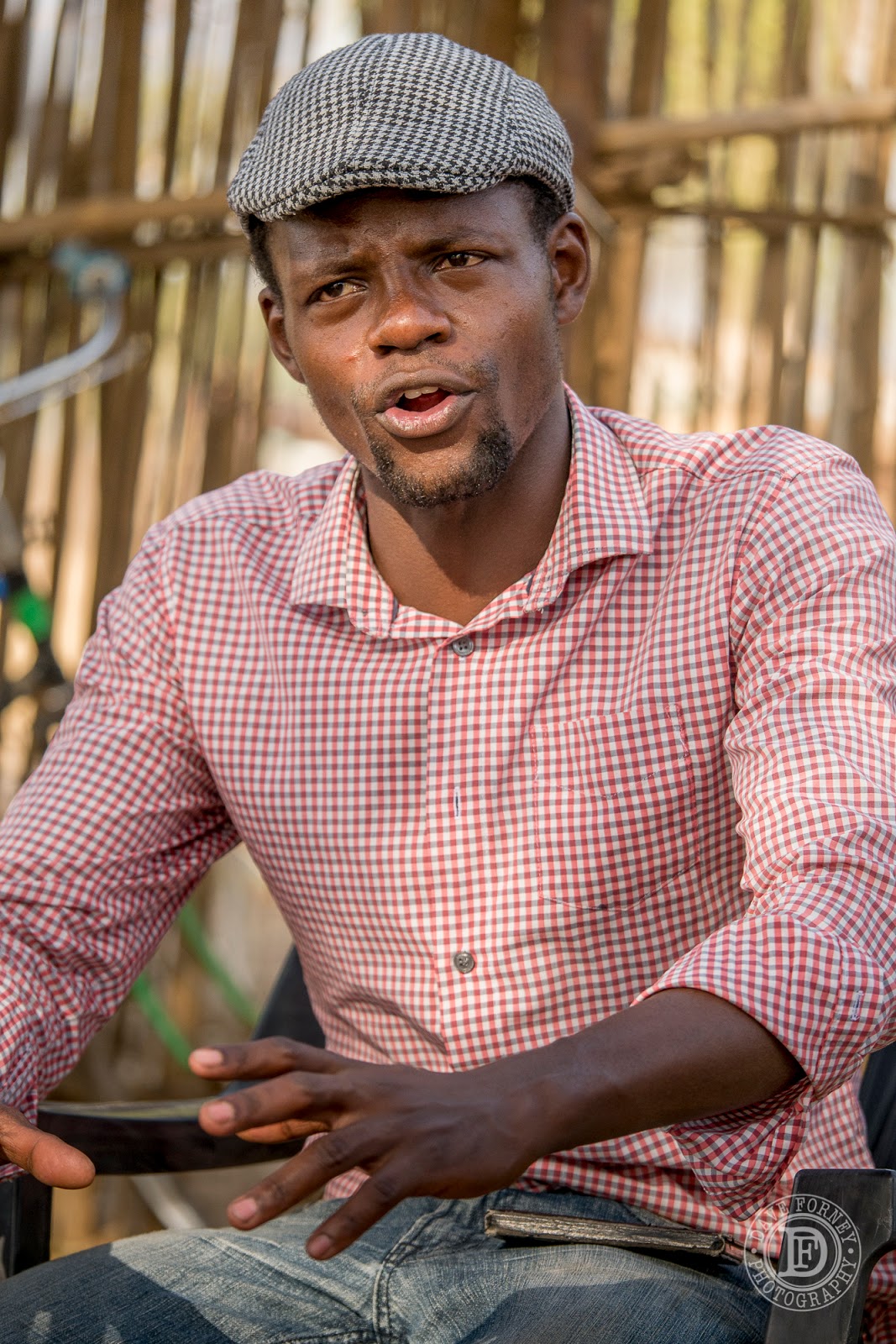 We visited another one of the Every Village radio stations that's currently being built in Mvolo.  This tower just went up in the past few months, and the simple studio building is currently under construction nearby. The team I was with took some time to pray over the tower, and for the future radio ministry that will reach hundreds of thousands from this location. 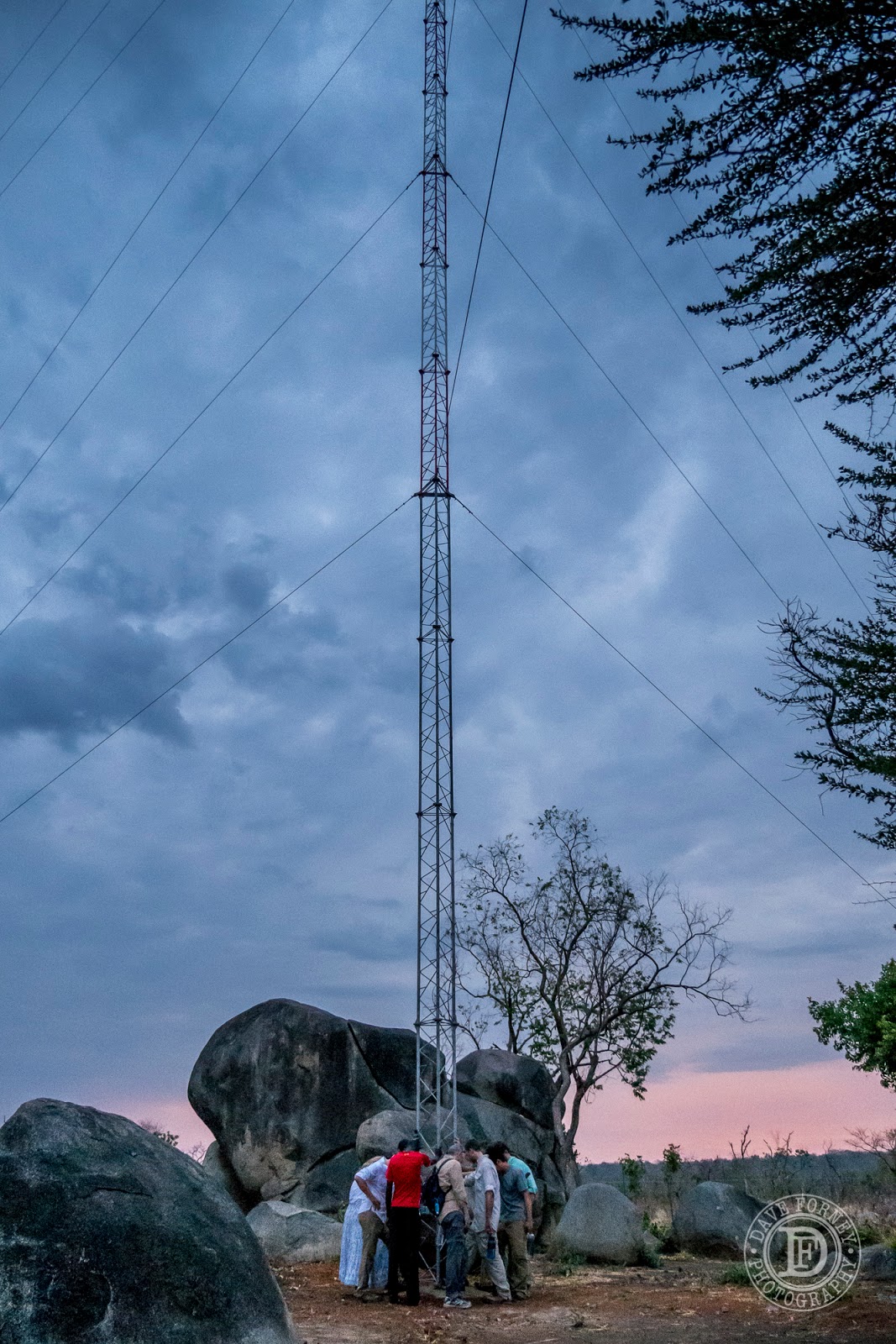 This guy was putting the grass roof on the little guard shack at the front of the radio property. It's amazing what these folks build out of the resources that are available to them! 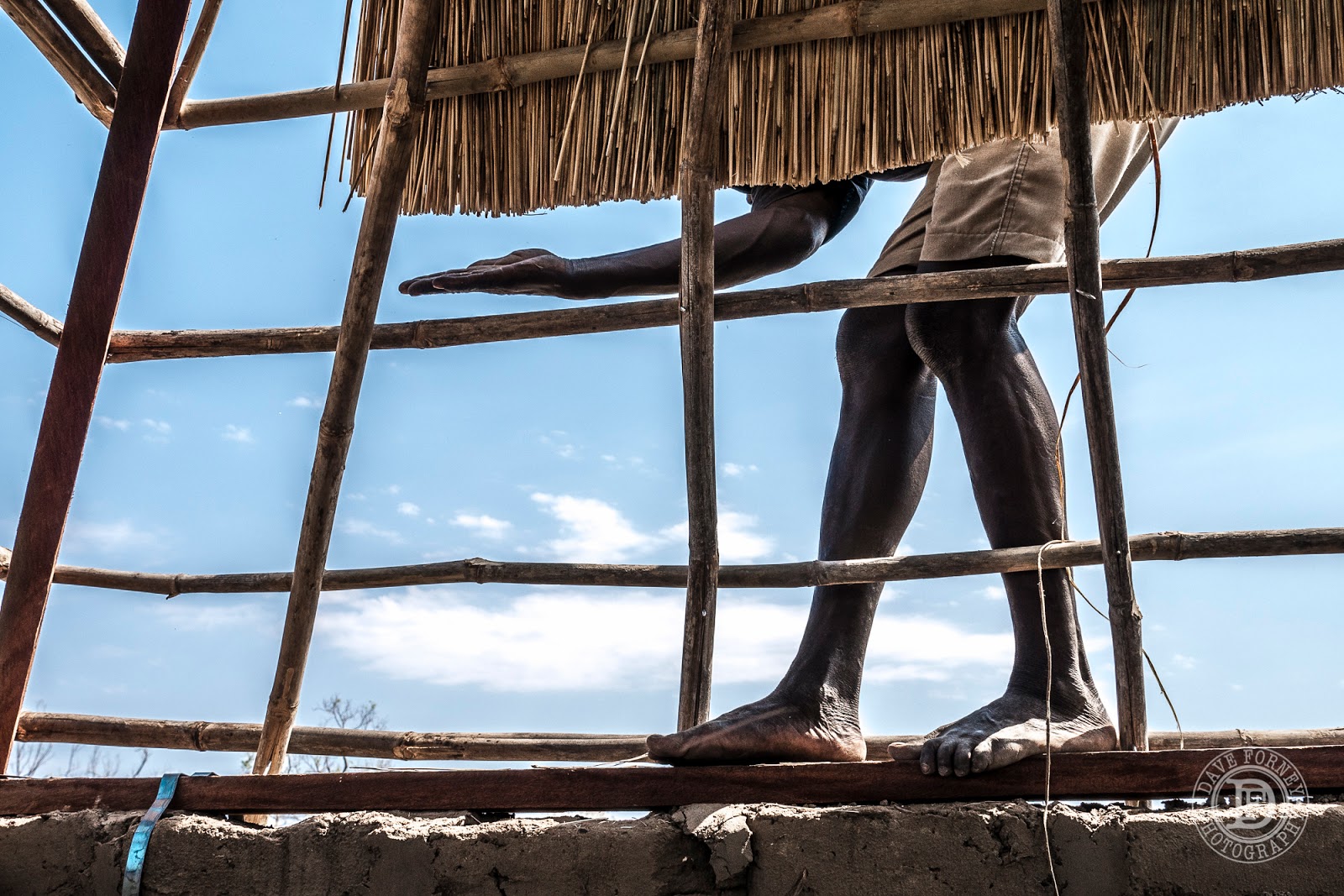 Not far from the new radio compound is a wonderful piece of land that the commissioner and community gave to Every Village, where the future missionaries will live. The community is already very familiar with this organization, and they are very supportive of the work that has already been done (many wells drilled in the area) and is being planned through even more wells, the radio, and the future long-term missionaries. In the middle of the land they were given, is a big rock outcropping. On top of these rocks stands huge, old, (but still very solid) brick pillars.  Apparently this used to be some sort of court house back in the colonial era.  The community would like the mission to incorporate these into some sort of new community center, so several of the guys on our team (who are engineers by trade back in the U.S.) took all kinds of measurements. As often is the case in these parts of the world, they had to get creative, since we don't always have access to all the normal tools and equipment that you'd have back 'home'. In this case, they were throwing a weighted string to the top of the pillars to measure their height. 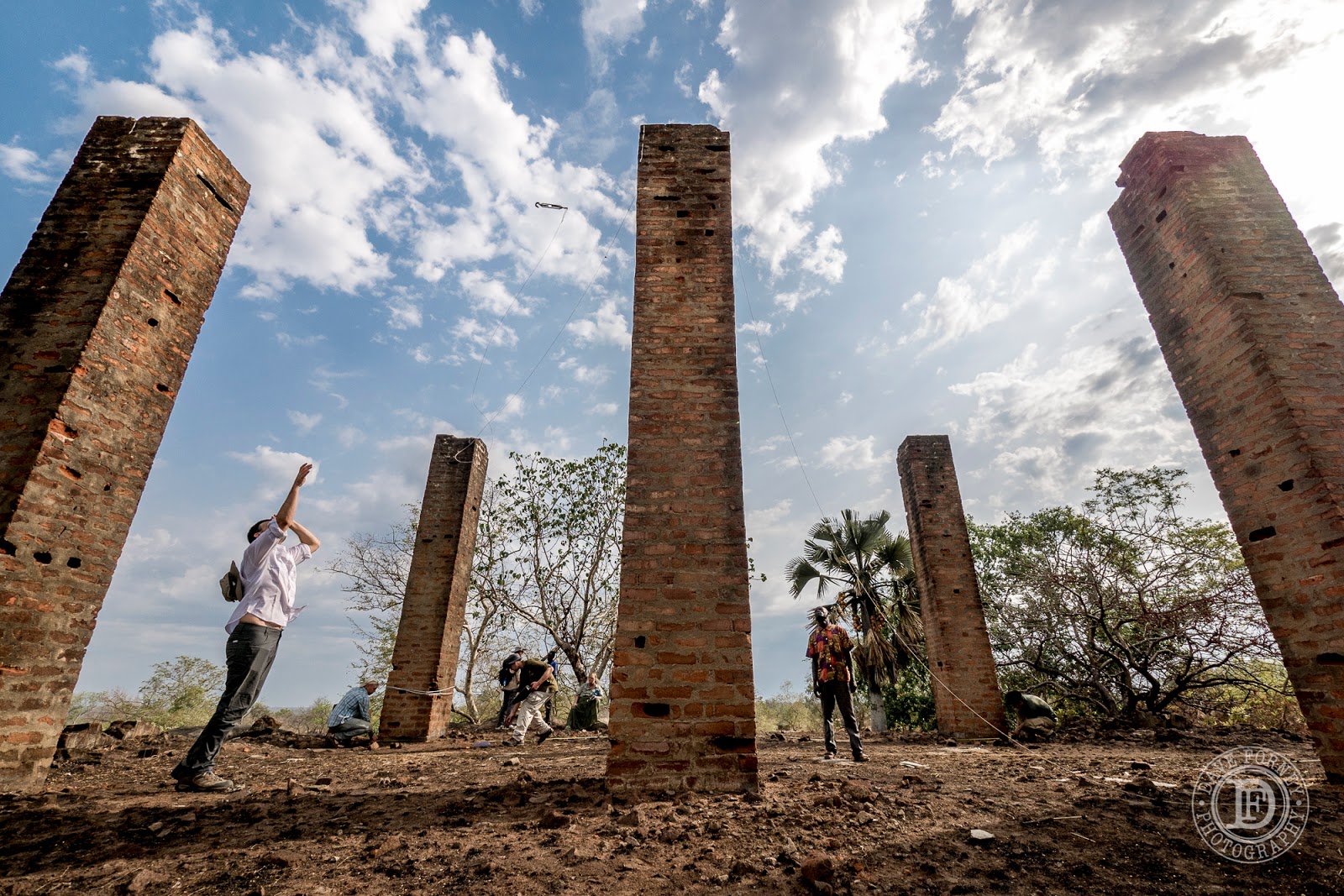 The project manager, who is overseeing the construction of the radio facility, took advantage of the high rocks, and a length of leftover cable, to put up a zip line. Work hard, play hard, right?  Several of us had a go on it--yours truly pictured below. Great fun! 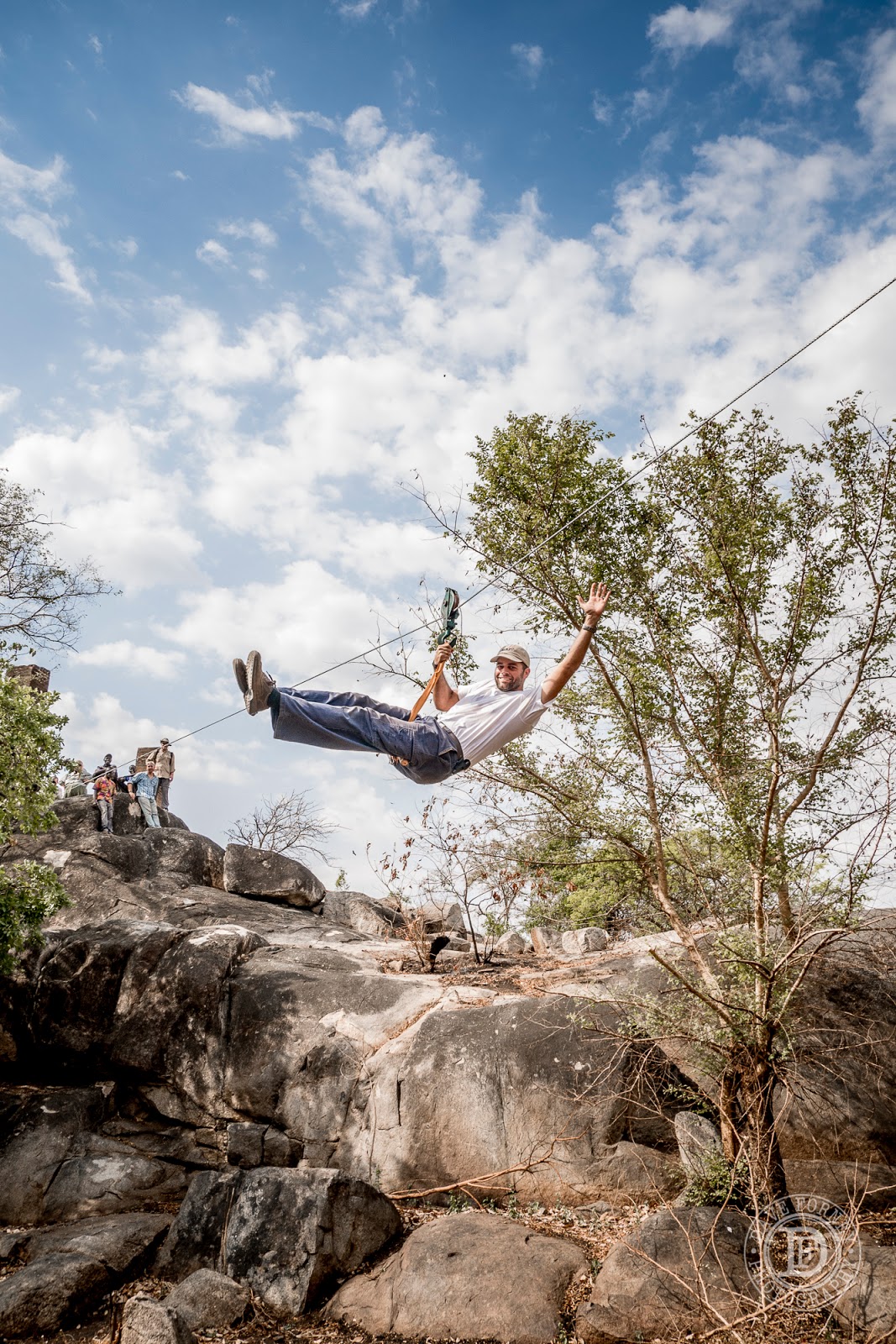 Again, the team prayed on the top of the hill--thanking God for the land that was given, and praying for the future ministry... and for the missionaries that will (hopefully soon) live and minister here. As of now there are still no missionaries that have stepped forward to accept this long-term assignment, so this continues to be a prayer request. 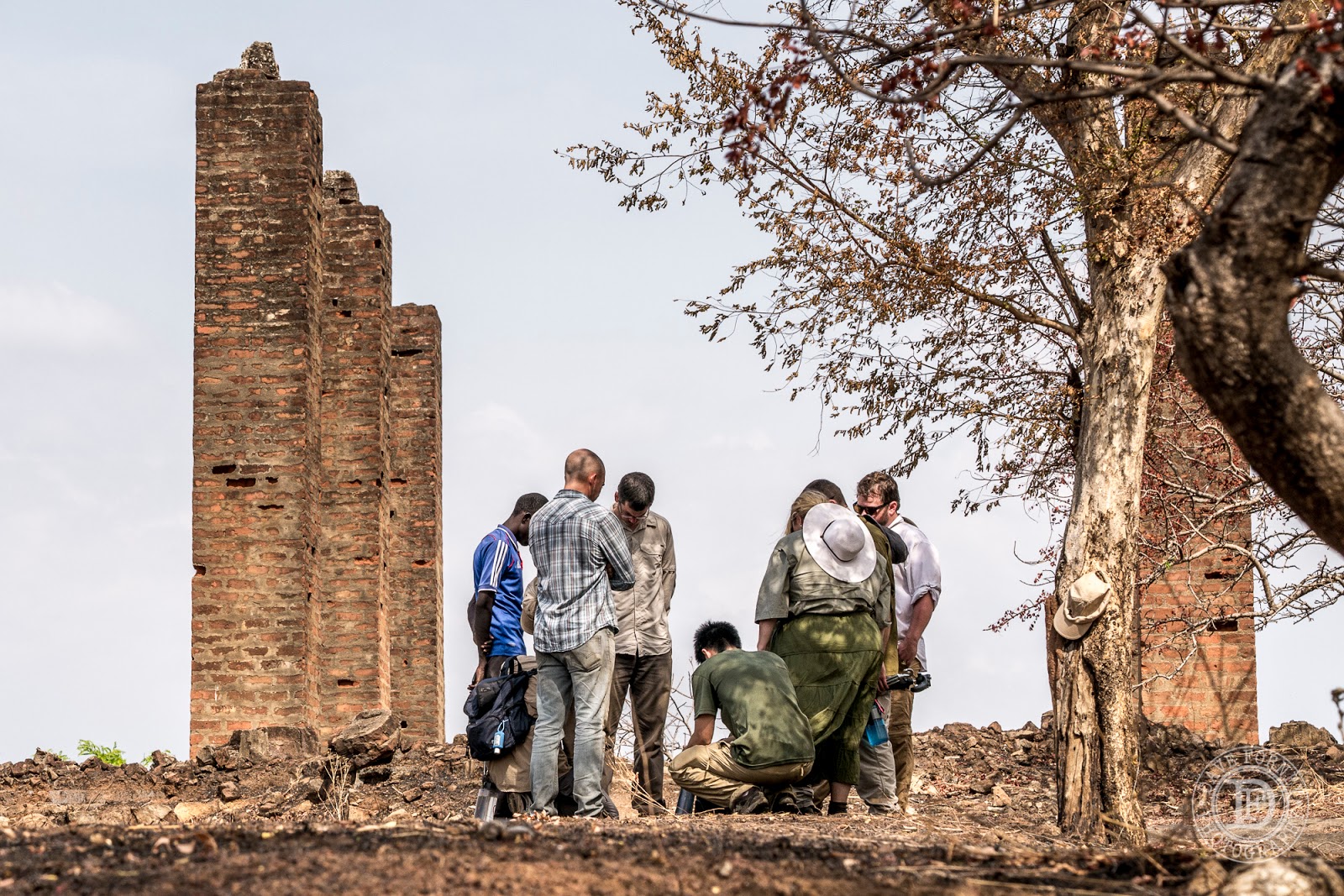 Here is a typical village scene in northern South Sudan. This happens to be sunrise, but it looks about the same at sunset. The skies are hot and clear, the temperatures soaring well above 100°F  by mid day, and the air is so dry it just sucks the moisture out of everything. (When I landed in Wow, for fuel, one day, the temperature was over 115°F in the shade!) The houses are made from mud, or mud bricks, and the roofs from sticks and grass. In the dry season, the land is mostly dust, any signs of green having vanished long ago. 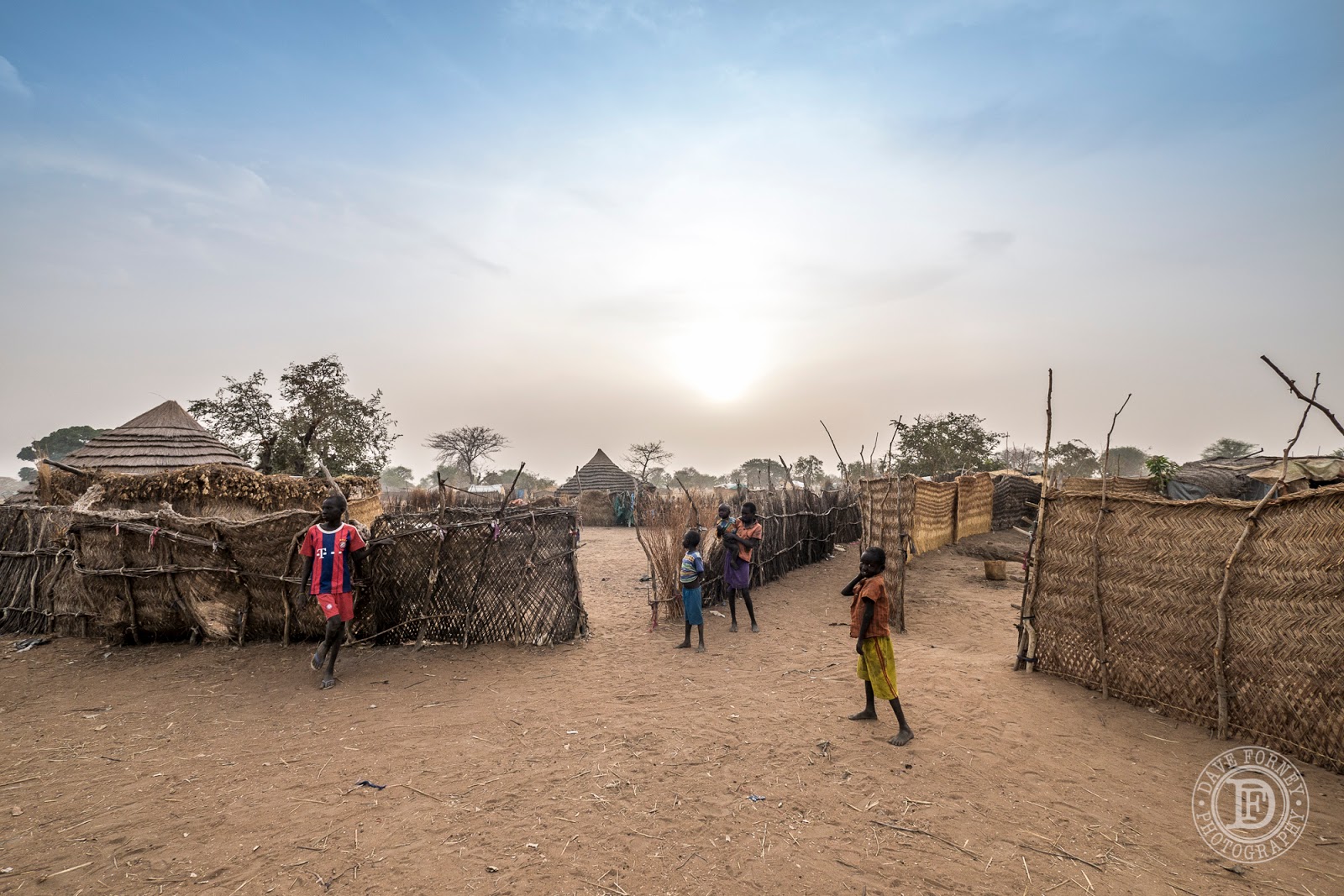 As soon as the kids see that I have a camera, they swarm me! In this case there was easily more than 50 of them following me around, each one hoping to have a picture taken, and then to be shown that picture. Most have never seen a clear image of themselves, so this is pretty exciting! They push and shove and fight to get in the image. Frankly, it can be a bit stressful, as I like to try to make it fair. But it's tough to do that when there's so many of them! Here, I tried a different technique, by holding the camera high above, so I could get as many of them as possible, unobstructed, in the same shot. 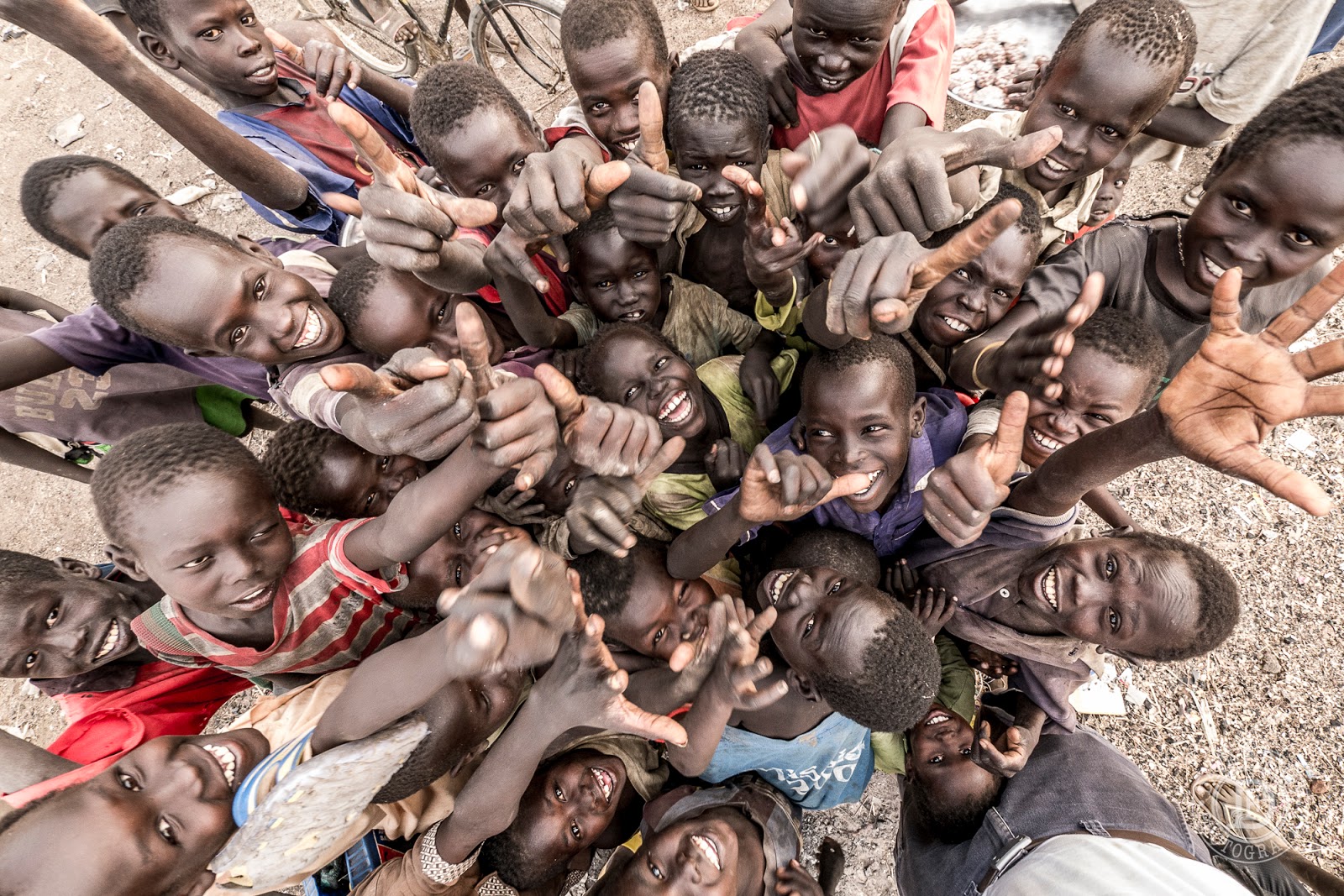 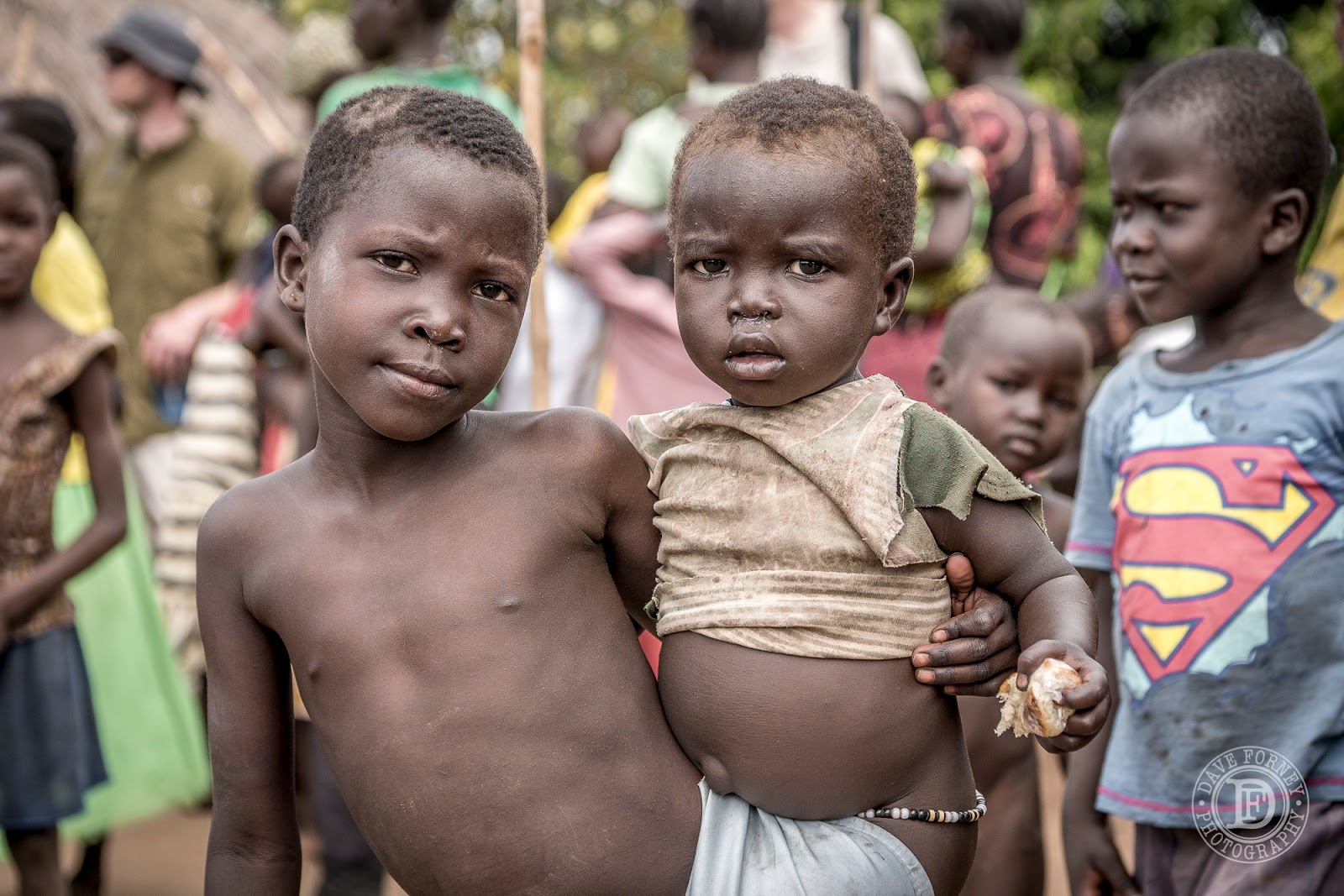 It's not too easy to take a selfie with the rather heavy, mirrorless camera, but these guys indicated that they wanted a photo of them, with me in it, and this is the result. :-) Good thing I had my smaller, mirrorless, rather than the huge, 5DIII. 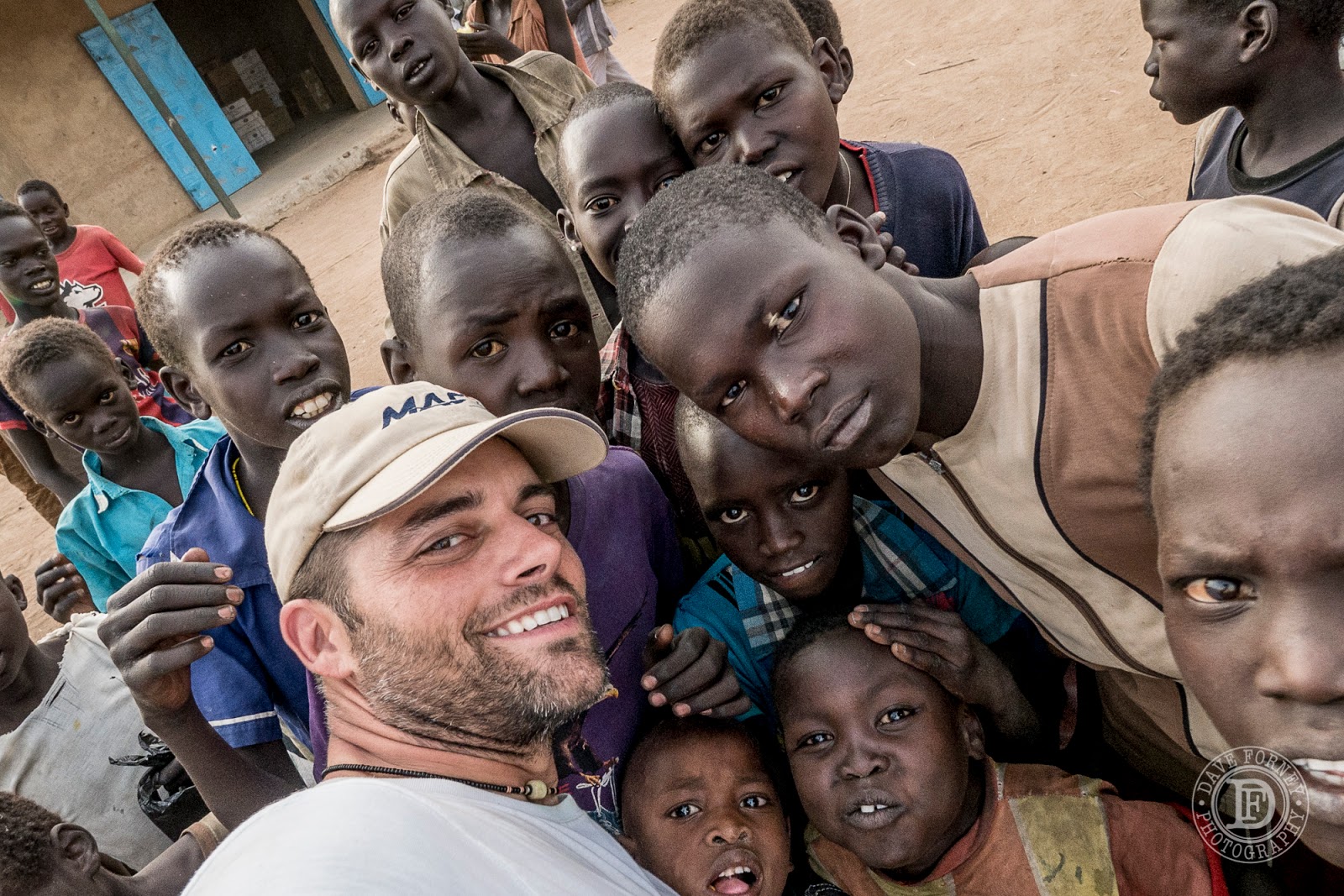 Check back next week, when I'll have a few more shots of the people, and the flying, from my week up in South Sudan.

On a totally different note, I wanted give kudos to my son's basketball team for winning their championship game yesterday. The HIS (Heritage International School) boys, 'under-16 team' won decisively, to finish the season undefeated. Even more importantly was the way they played. Led by some great coaches, they demonstrated that you can play hard, and play 'well', all at the same time. Well done boys!

My son, Britt, is the second from right. Three years ago he had never played, or even seen, an organized sport, having lived most of his life in Indonesia, in a home-schooled, or one-room-school environment. The first time he picked up a basketball, when we were on furlough 3 years ago in Oregon, it was almost agonizing to watch him fumble it around.  But after growing a LOT in the past two years, and practicing a ton, he wound up being one of the starters this year, and played almost all, of every game this season. 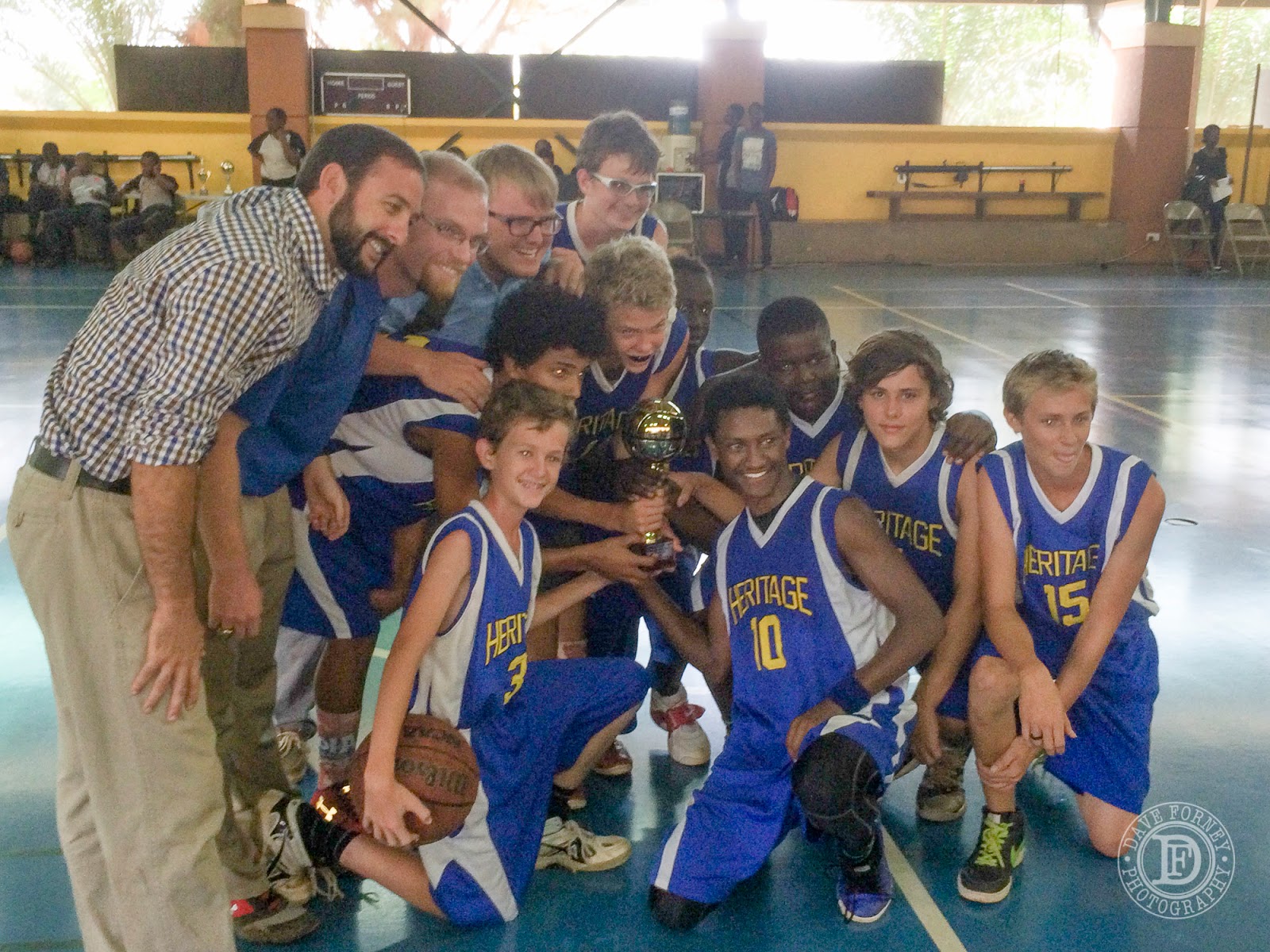 How encouraging to see the hands of God at work through you and others he has sent to South Sudan. Make God continue to bless you as you reach out to those in need in His name!!

Great story and pictures, Dave. Are you not allowed to say the name of the organization or where they work?

Thanks for the photos about South Sudan and the radio antennas going up. Will keep them in prayer for a missionary family.
And well Done to Britt and team!
Sandy in the UK