Road Trip with the Ladybug!

Today we leave Oregon, headed East to PA by next Sunday. We'll be pulling our one-of-a-kind ladybug trailer. Anyone behind us on the highway will be treated to a big smile that will hopefully brighten their day. (The antennas wiggle as the trailer moves down the road also.) 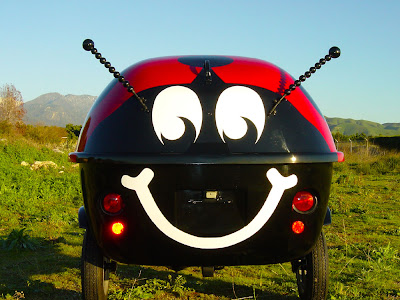 It didn't' always look like this. When we got it, the trailer was plain white. Actually it was used pretty hard too, so it needed a little work...and paint. This was five years ago when we went out East to do some refresher flight training at Moody.

The kids kept saying it was so boring. So we voted on options--ladybug, turtle, bumblebee, etc., and the ladybug one. So Britton and I painted it up like a ladybug. Anyway, if you happen to be on the highway the next week (or anytime in the next two months really,) and you see this trailer, that's us! But our "new" van is green, not blue. 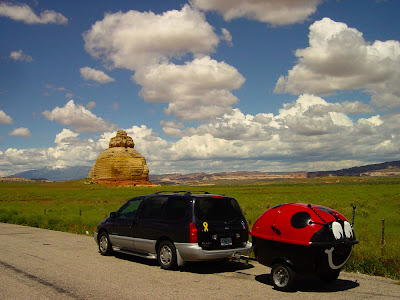 Please keep us in your prayers as we travel. We look forward to seeing many of you over the next days and weeks.
Posted by Dave at 4:39 PM 7 comments:

Sorry it's been a while again. We've been soooo busy lately. It's crazy! This is a bit of a long update, but as you'll see, we've had not much time to do blogs, and so I'm updating you on everything all at once. Just in case you thought we were sitting around sipping lemonade and eating bon-bons, we'll try to set the record straight. :)

Our week at MAF headquarters passed in a flash. In addition to a required maintenance restandardization, a ton of meetings, routine doctor appts., and a routine psycological evaluation, we also had a brief chance to "hang" with some of our good friends there. I've done a lot of hunting in my life, but I can tell you that I've never done anything quite like the "whistle pig" (gopher) mission that Brandon took me on. Craig (in Tarakan,) if you're reading this, you would have loved it. I'll tell you all about it in person, but I'll spare everyone else the gory details. And just in case doing drive-bys on gophers wasn't a sufficient re-introduction to American manliness, I also got to do a ride-a-long with Brandon on a fire engine out of Meridian. Here's my thought on that...I gotta find me a siren to mount on my airplane. There's just something about that siren that gets me going. Oh, and then there was a fantastic BBQ (we don't get those in Tarakan--at least not with the real burgers and massive hot dogs and all the fixins and ice cream and...) with the Davis's, and some yummy Mexican food at friends houses. And lets not forget to mention Taco Bell and Papa Murphys. Ya, we're puttin' on the pounds already.

So what's our initial thoughts and reactions to the "re-introduction" into American life? One word - HUGE!!! Everything is HUGE! HUGE houses, HUGE cars and trucks, HUGE streets, HUGE stores, HUGE shopping carts, HUGE sodas, HUGE portions, and...yeah, HUGE people. Don't be offended if you're a bit larger in size. It's just an observation, but one that really hits us after being in Asia for so long. Many Americans really are big. We just don't see that where we live in Tarakan. And as we walk down the grocery isles, it's no wonder why...there's so many choices!!!

Well, after flying to Portland things have gotten even busier. We've been here a week and our time has been totally consumed with looking for and then purchasing a used van, and then getting insurance for it, and then getting it through emissions testing and then doing the registration and...well, you get the idea. And clothes shopping (we came back with very few clothes, and we need to buy summer clothes for our entire next term in Indonesia before they start putting the fall stuff on the shelves). And shoes. And the laptop needed to be repaired, and we needed a cell phone (there's no land line at the mission house,) and we signed up for AAA, and worked on planning the trip to PA, and then there's the doctors appts. Lot's of those! YIKES!!

Lets see, I've been to the Dentist three times and had a major root canal. Another tooth may still need a root canal, and there's still more dental stuff that will have to wait till we get back to Oregon in September. But after having very bad pain in my teeth for six months or more, it already feels much better (the "dentist" in Tarakan said the thumping, aching teeth were fine and just slapped some epoxy on the side of the tooth and called it good. It made it worse.) And I've seen another doctor about intense knee pain that developed before and during my jungle trek in April / May. I had to get an MRI for that and am waiting on results. And I'm trying to get into a dermatologist to cut off a suspect mole, but doesn't look like that will fit in before our road trip. But the heavy antibiotics that I've been on after seeing the MAF doc in Boise...well, those are seeming to help. Apparently I had a persistent and prolonged infection coursing through my veins, probably since my jungle trek. The random infection-oozing sores that would pop out wherever, and not go away, well they're going away now, and my body and even teeth feel better. He said that it was all throughout me. Who knew?

Meanwhile, Joy is finally getting some relief in her wrist after a month of very intense pain. While trying to clean termites out of the top of the kid's closet (balancing on the top of a tipsy stepladder) before leaving Tarakan, she got whacked in the wrist by the ceiling fan. The "doctor" in Tarakan x-rayed it and said it was fine. The doctor here did the same thing and examined it and immediately determined that she had torn a ligament, and that it was getting worse not better. So she gets to wear a splint, but is glad to be on the right track with that now.

And we haven't even started on our "list" of things that we had intended to get done before we hit the road for two months. So the next few days promise to be just as busy as the last.

But despite all of that, we are thoroughly enjoying being here. It's so wonderful to be able to see family and friends, though we look forward to being able to spend more time with them in the fall after things slow down a bit. And we really enjoy the beautiful weather (they're giving heat warnings here in Portland and we think it's a touch on the cool side.)

On this July 4th weekend, we certainly realize how much we as Americans have to be thankful for. Our country is the greatest country in the world, with more opportunities and freedoms than any other place on earth. Even in the midst of an economic crisis, and the uncertainty of political situations, no matter what your view on these things, I can tell you that we are still a very blessed people and nation. Living overseas for a while and then coming back here really gives you the opportunity to see what we have, and what we often take for granted. There's a reason people from all over the world try to immigrate to here. We have a lot to be thankful for. We truly are blessed!

We leave Friday morning to begin driving from Oregon to Pennsylvania.
Posted by Dave at 12:07 AM 7 comments: