Trekking With My Son -- The White Clouds Wilderness Adventure (Part 4)

Here's the final post from my trek with Hudson in the White Clouds Wilderness of Idaho. Below, a panorama from my iPhone, looking down on the Four Lakes Basin from the pass between there and Born Lakes.

I think I mentioned it before, but there was some smoke the first day, lingering on the edges of the mountains, coming in from a distant forest fire. We were concerned that it might wind up really obscuring our views. But in the end, it made for some dramatic skies the first evening, and after we crossed the first high pass, we left the smoke behind for the remainder of our time there, until the last evening when we made our way back out again. 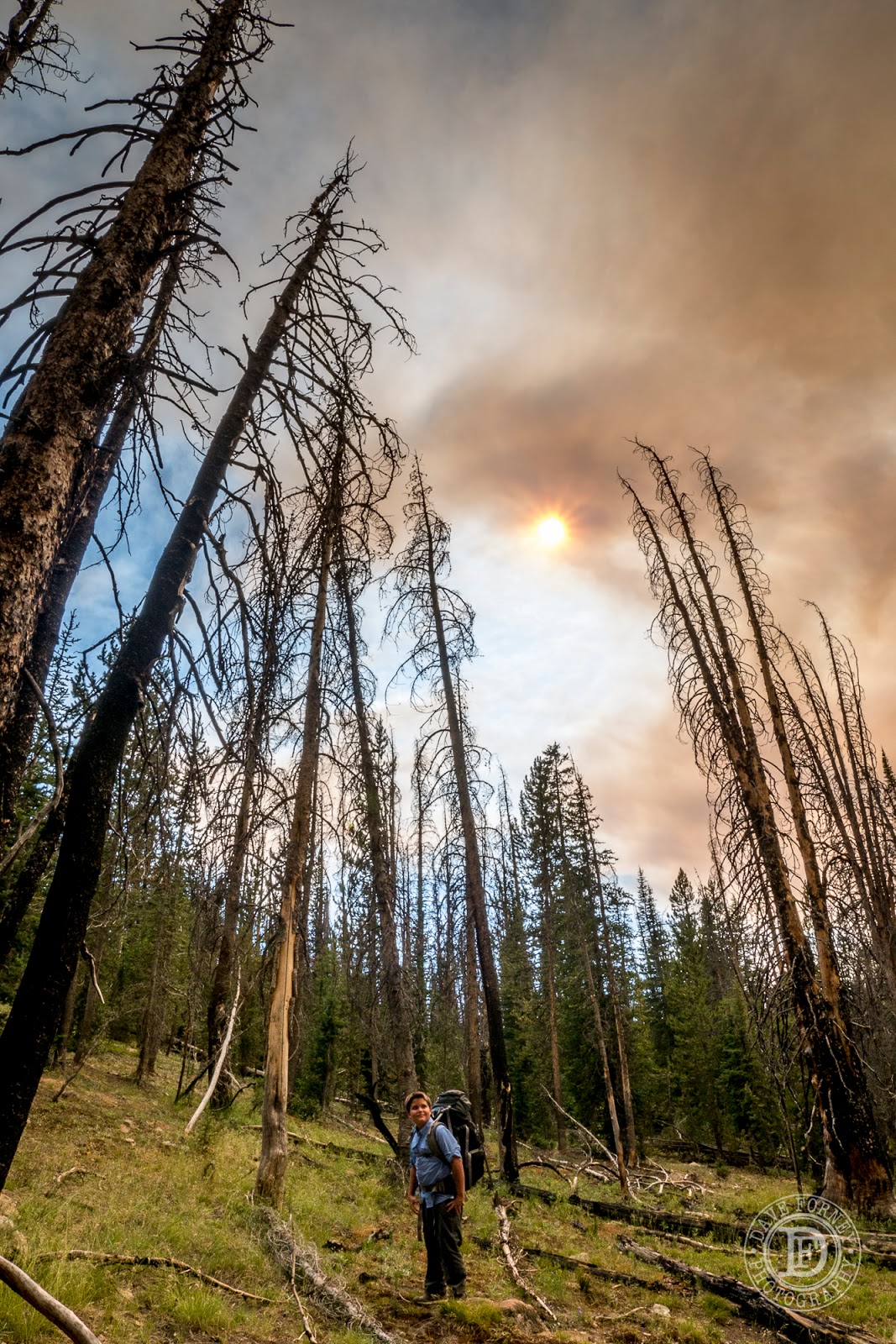 Here's another shot from the first evening--the smoke lingering in from the West (left) while the blue skies persist to the East. This is the trail through Ants Basin, towards the Born Lakes. That mule deer we saw (that I showed you last post) was enjoying the green grass of this meadow, on the edge of those pines in the distance. 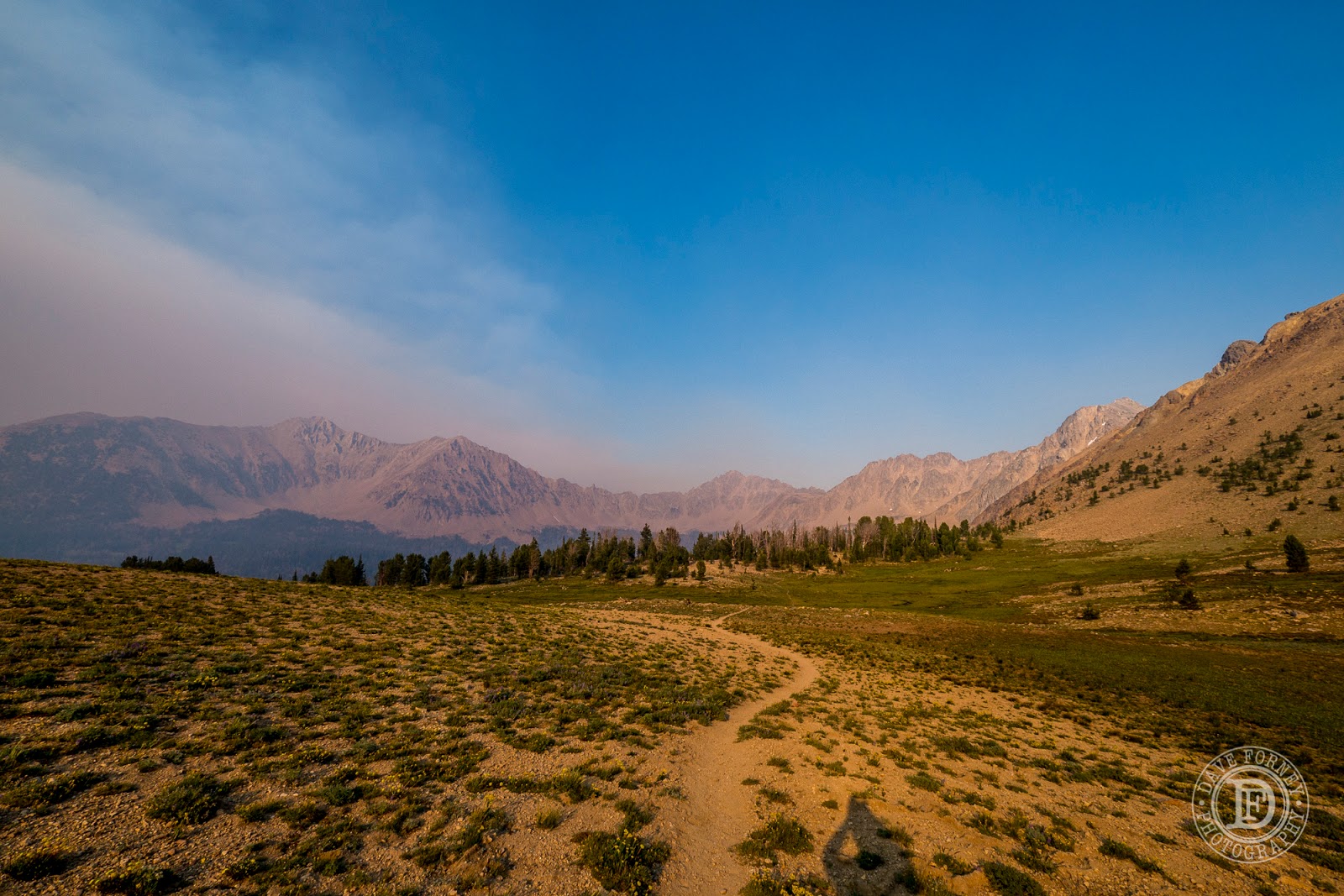 Here's a shot of the sun sinking through the smoke over Fourth of July Lake, on our last evening before leaving the White Clouds Wilderness. 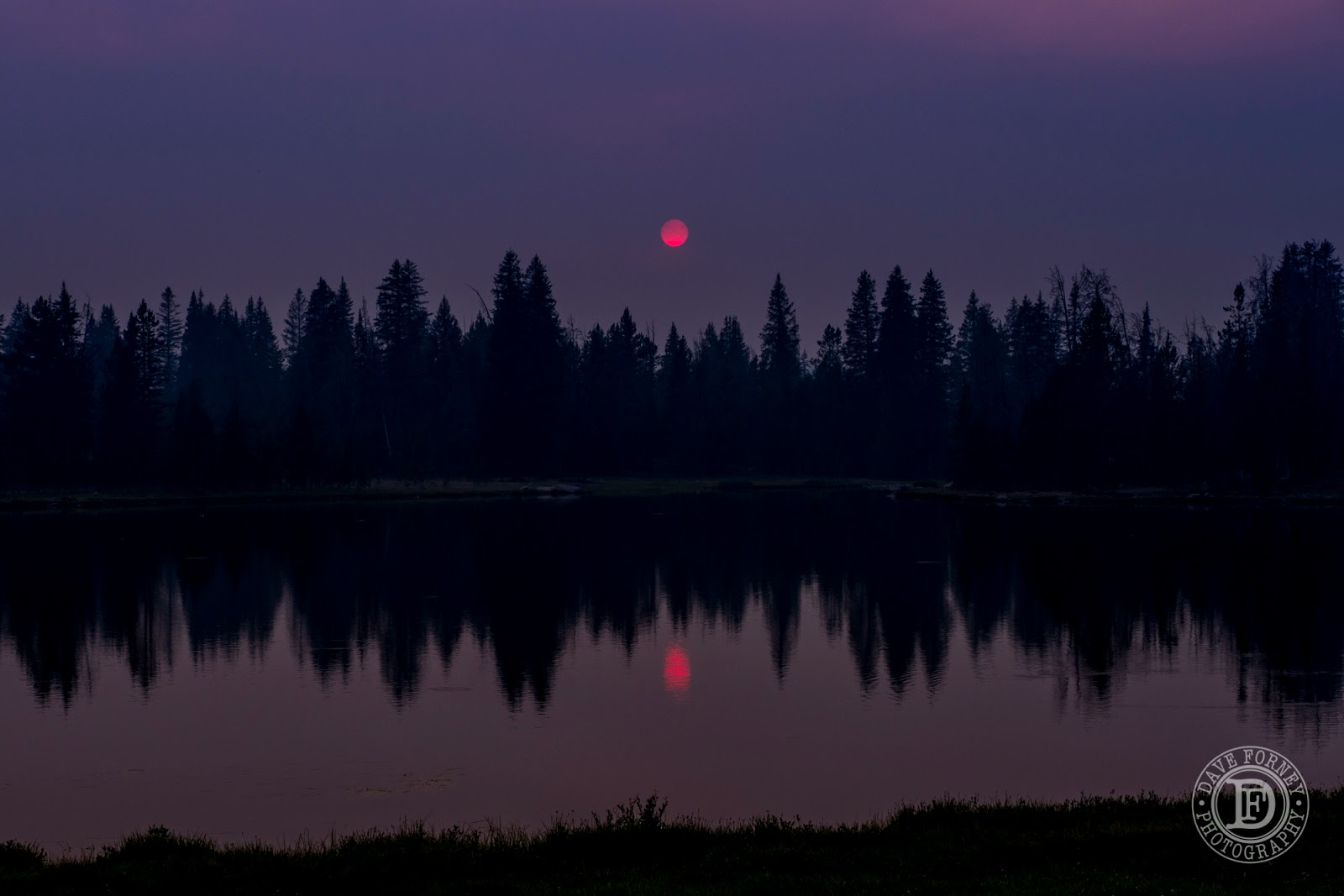 The rest of the time we enjoyed views like this one below. This is a shot looking down from the 10,150' pass above Headwall Lake, Scoop Lake, and Hummock Lake, at the upper end of the Boulder Chain Lakes area. 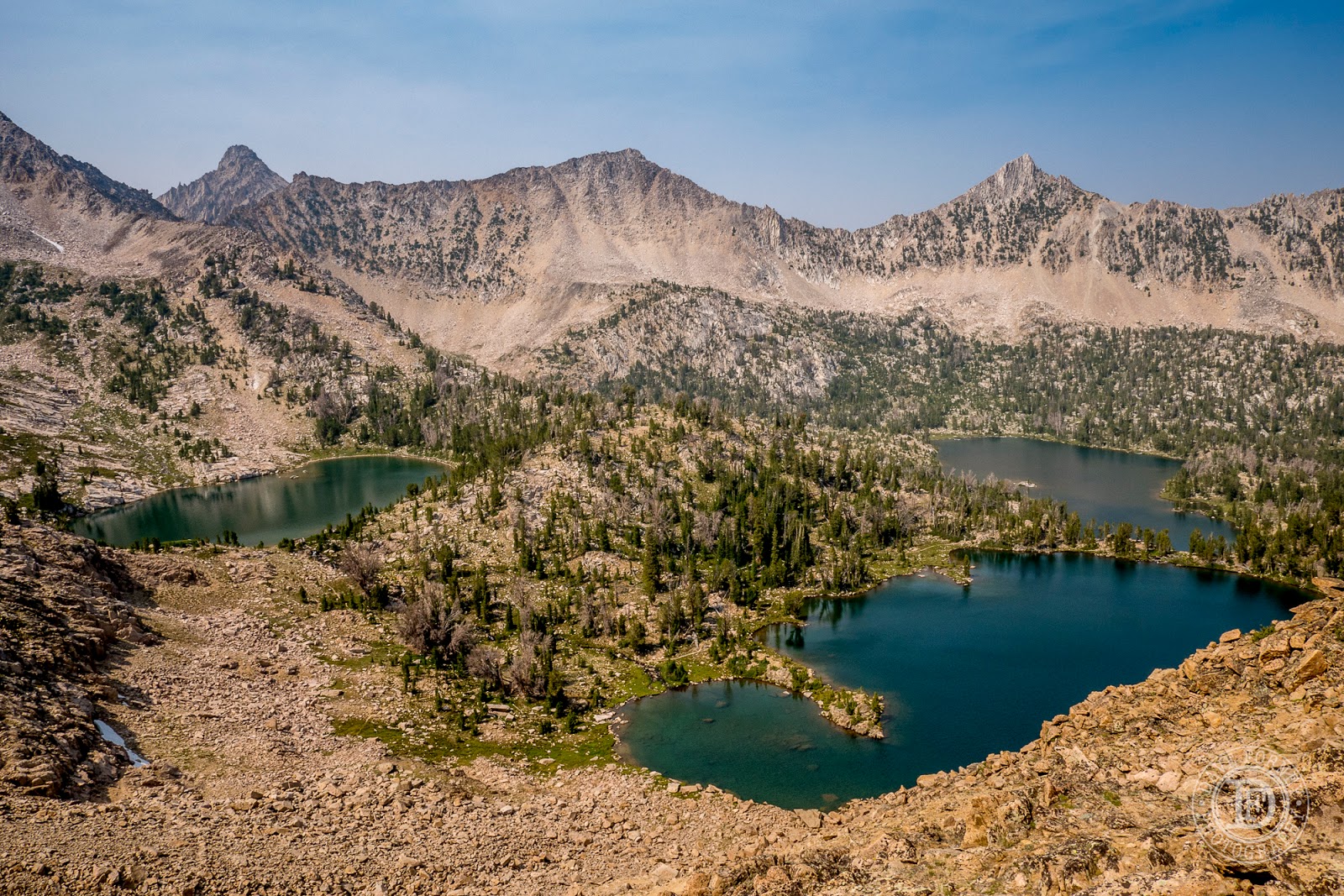 Here's a shot looking down on Quiet Lake, as we were descending from the Four Lakes Basin. 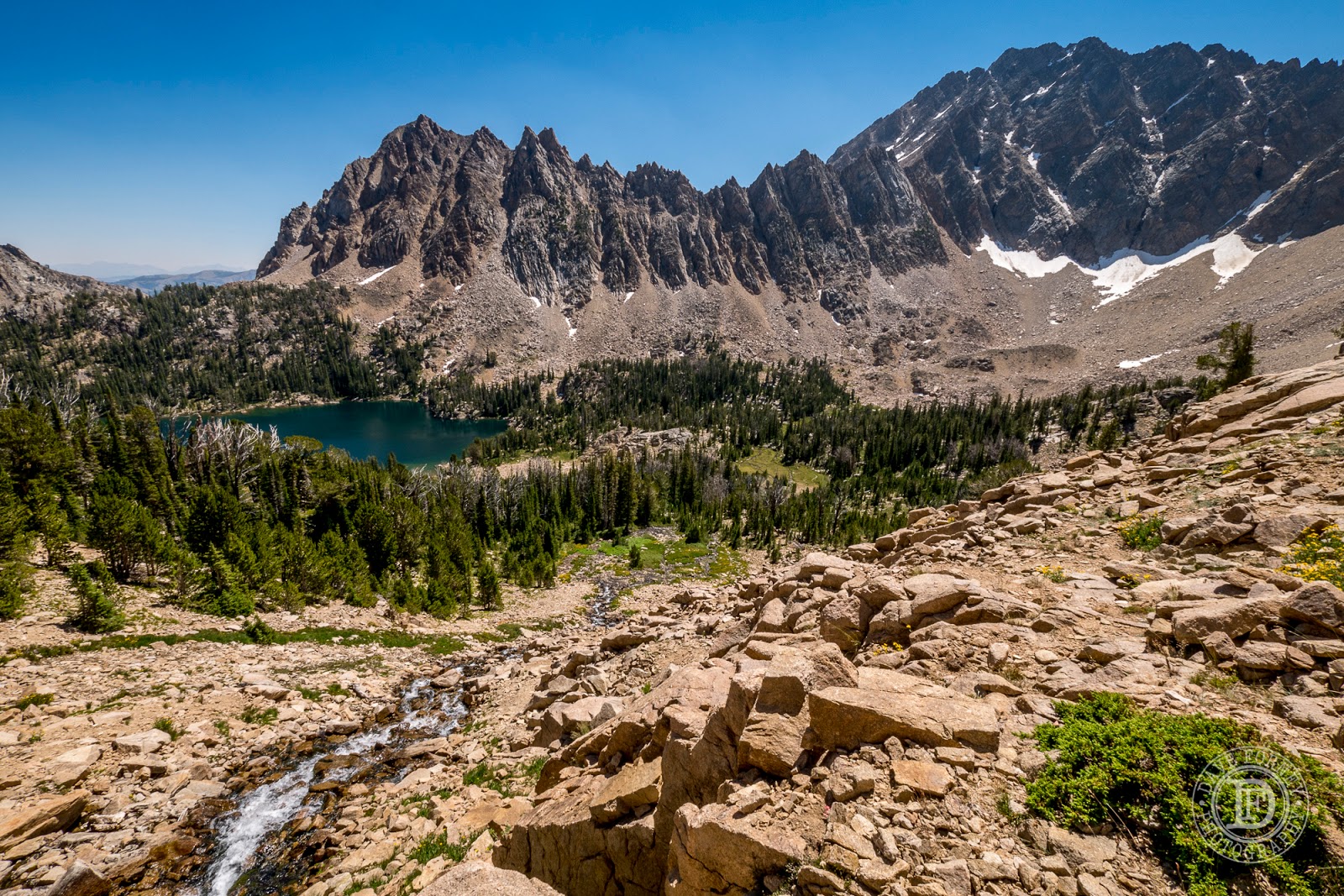 This was the view form our tent, the first night when we camped at one of the Born Lakes. 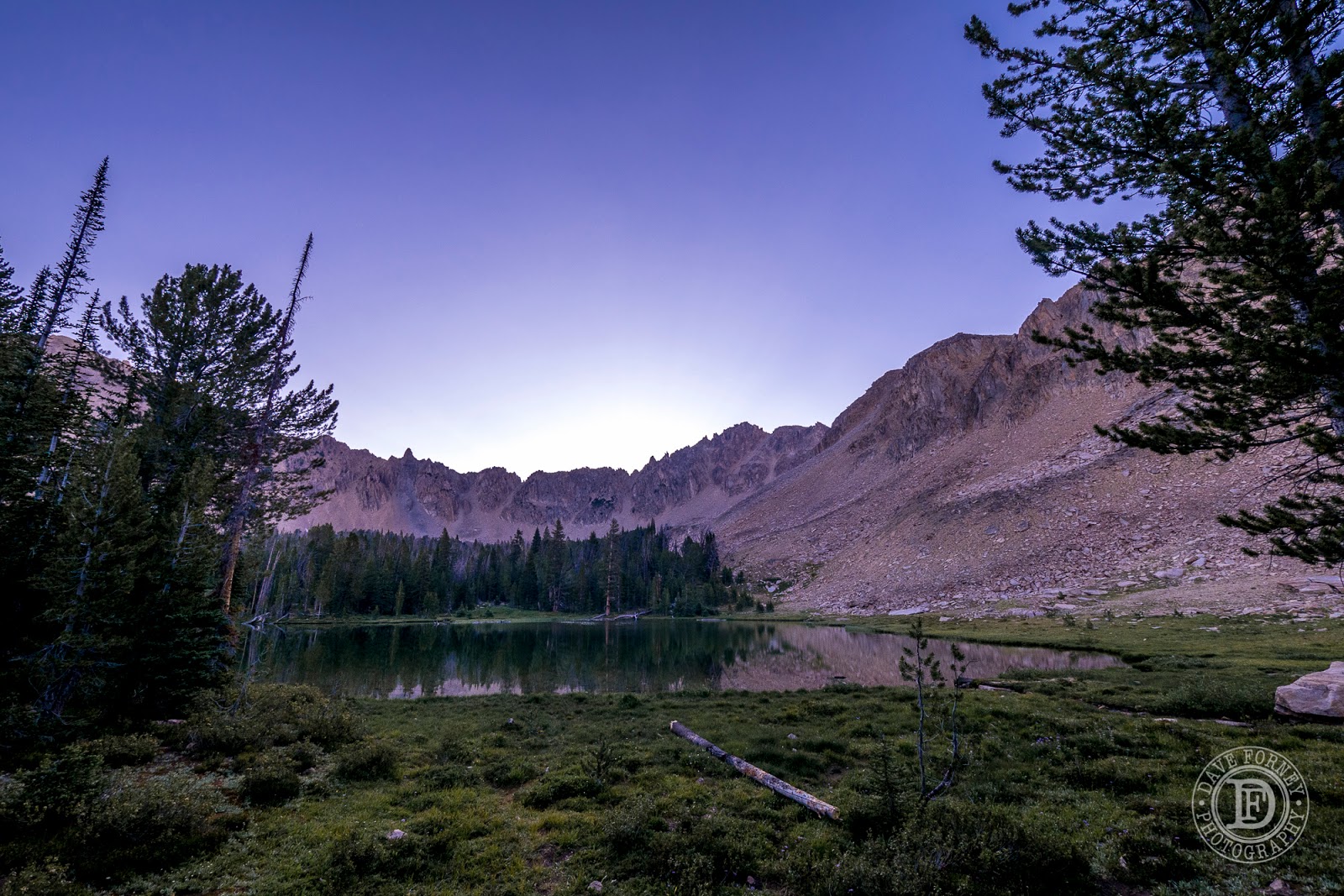 And this is the following morning, another one of the Born Lakes reflecting the deep, brilliant blue of the sky. 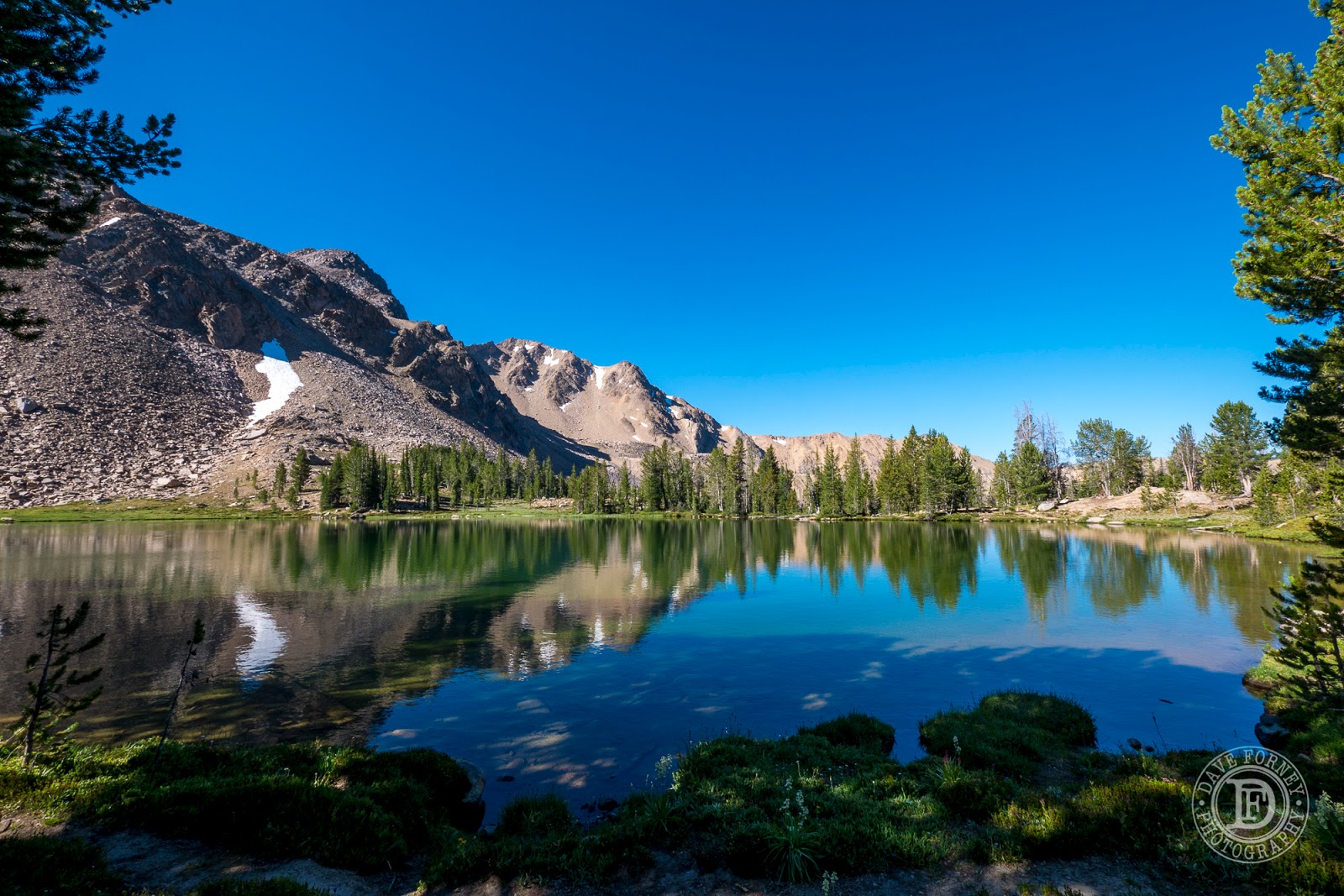 Here's an iPhone panorama looking down on the Born Lakes region.

And here's a shot looking down on Emerald Lake, Rock Lake, and Glacier Lake, with the upper end of Cornice Lake just barely visible on the left. These lakes (of the Four Lake Basin) were absolutely unbelievable crystal clear. 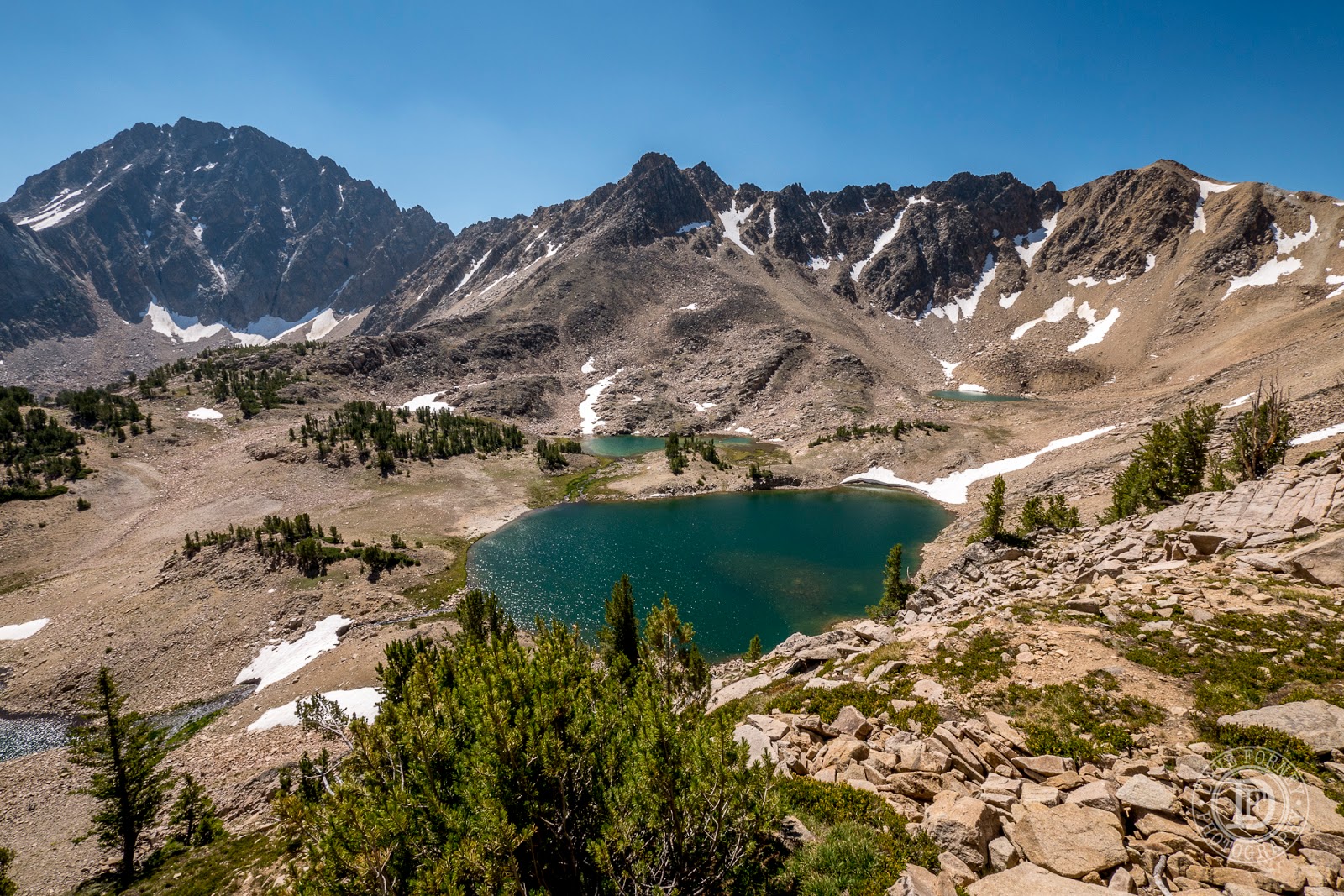 This was the sunset we enjoyed on our last evening in the White Clouds Wilderness. We ate our dinner that night while sitting on a rock on the edge of this lake, watching the sky change colors as the temperature dropped. A deer came out of the woods and walked almost all the way up to us, before shying away only slightly. We watched her until it was almost completely dark, and then retired to our campfire. 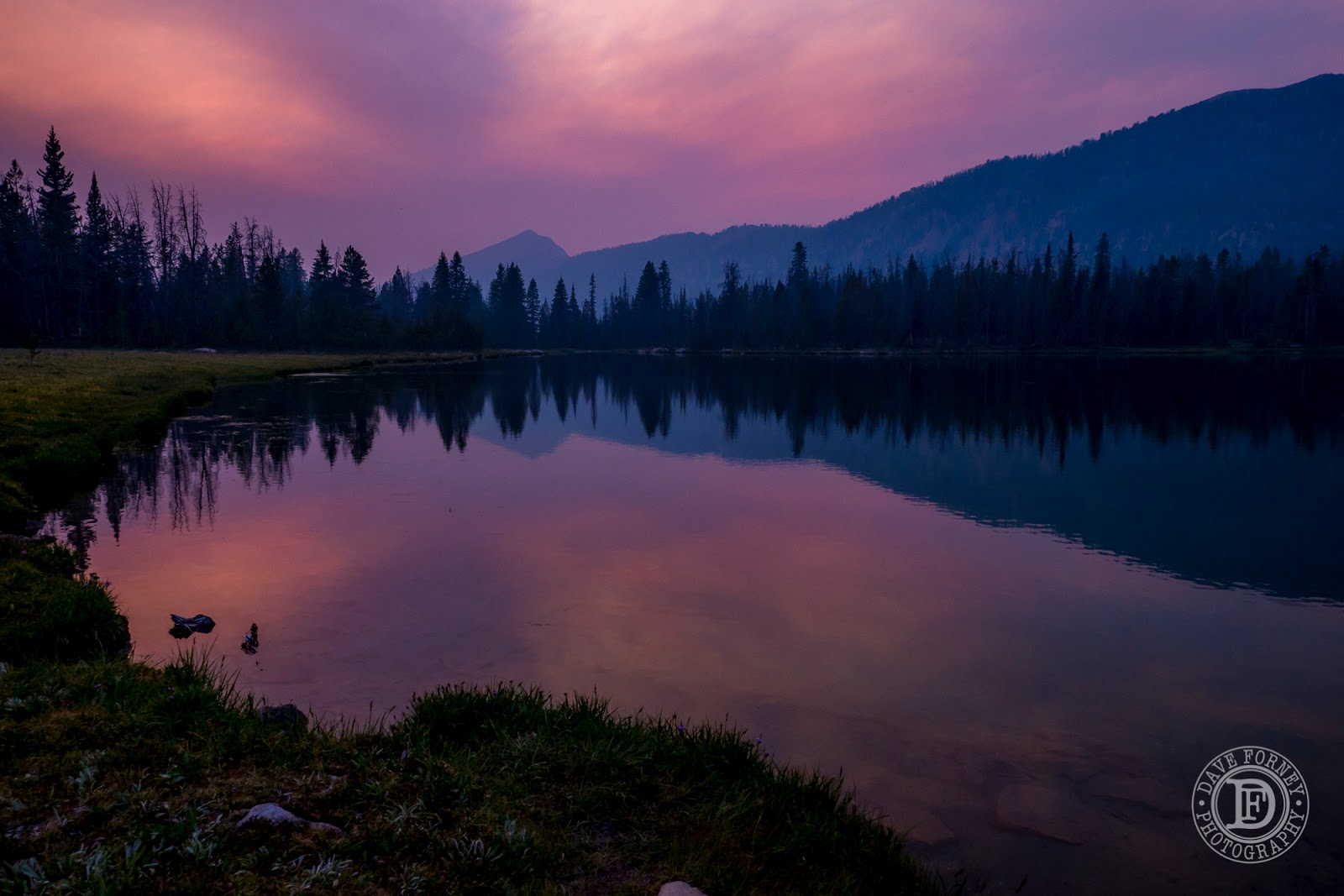 That's it. I hope you enjoyed some of the photos and description of my trek with Hudson into the White Clouds Wilderness. It was an epic and wonderful adventure for us. We bonded and made memories that will last a lifetime. 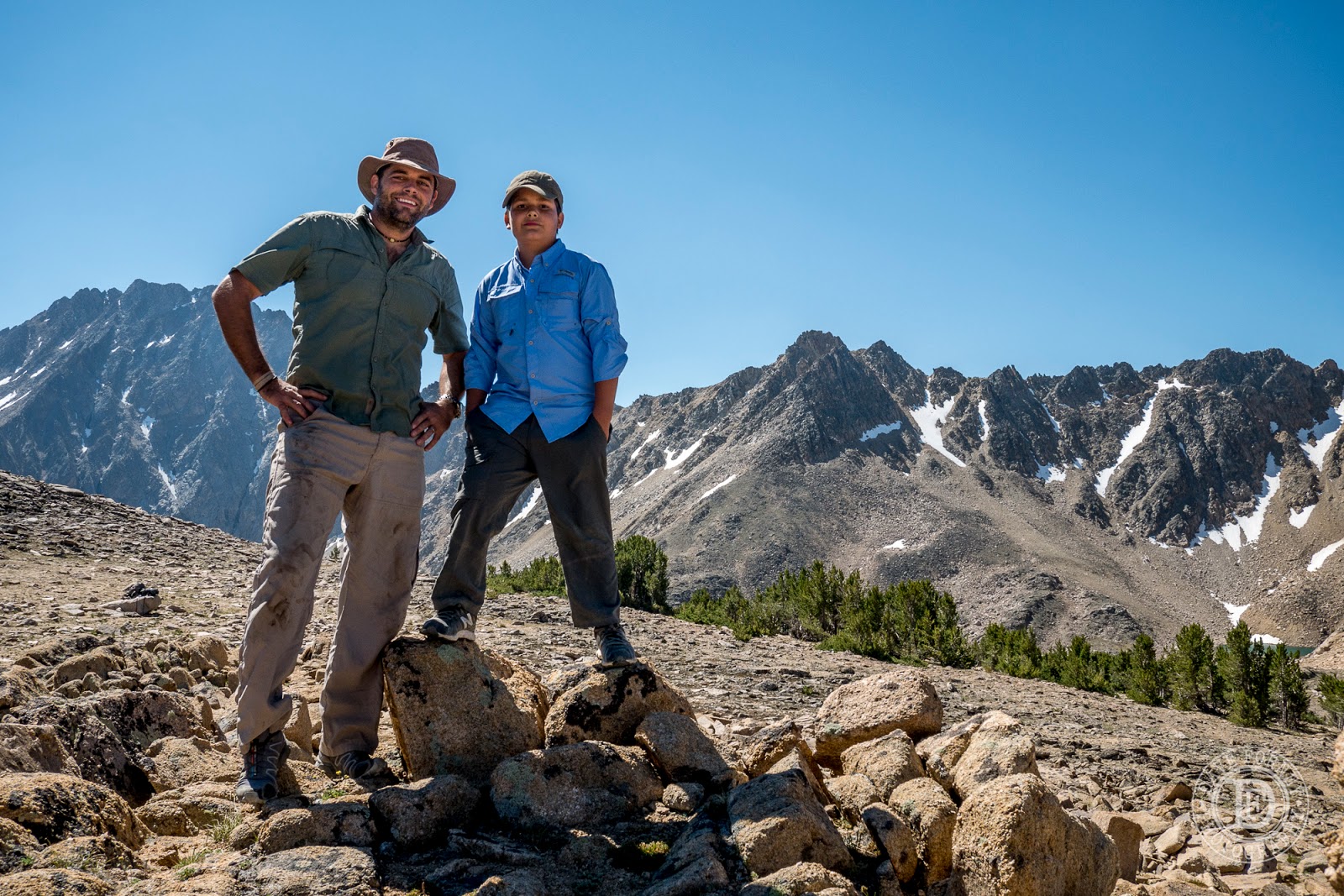 Trekking With My Son -- The White Clouds Wilderness Adventure (Part 3)

As promised, in this post I'll share with you some of the natural beauty--flowers and animals--we saw along the way. We definitely went at the right time of year for wildflowers! Below, Hudson catches his breath as we scale a flower-covered pass with Castle Peak visible in the distance. 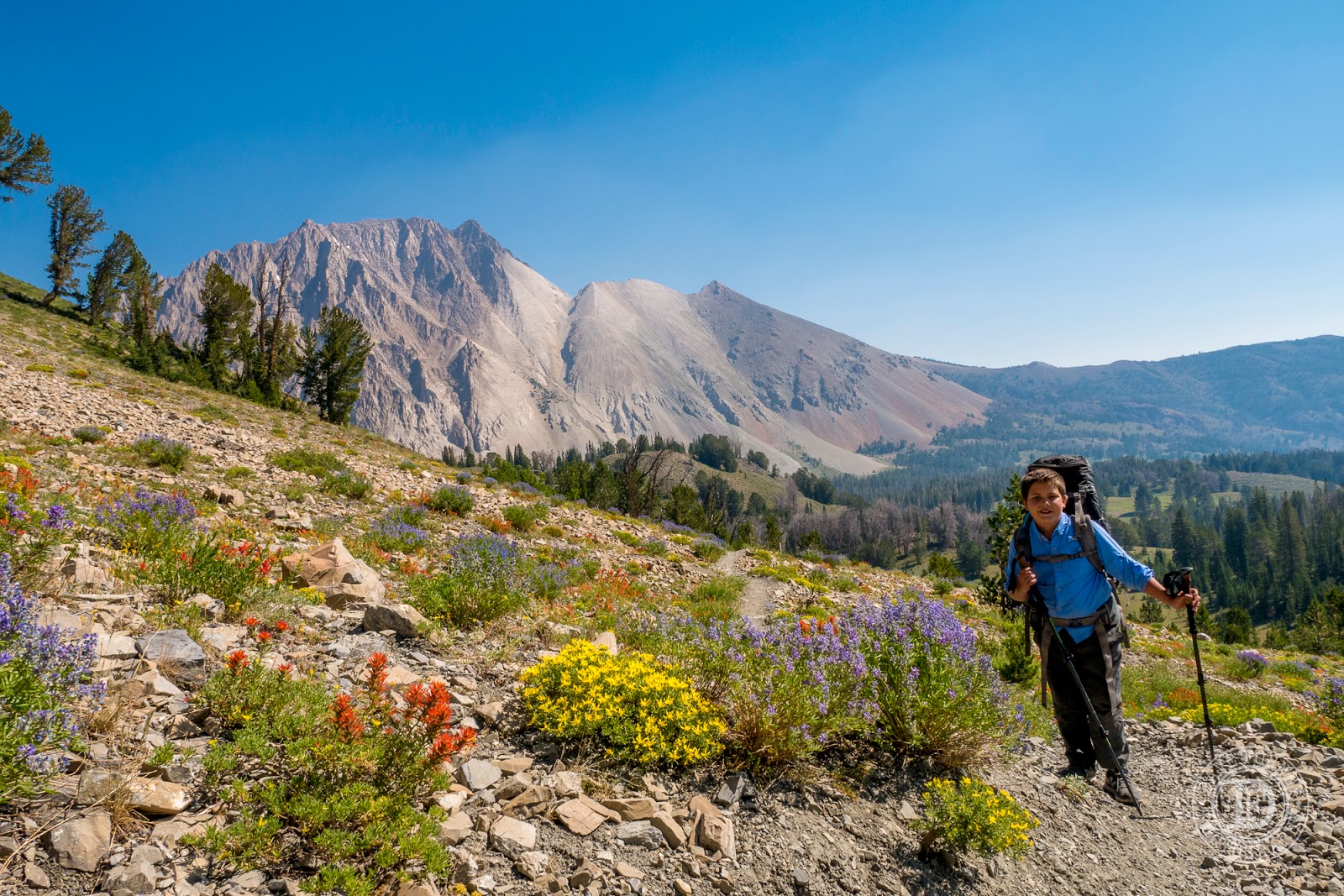 It seemed like everywhere we looked there were wild herbs and flowers of every kind. The fragrance was amazing! 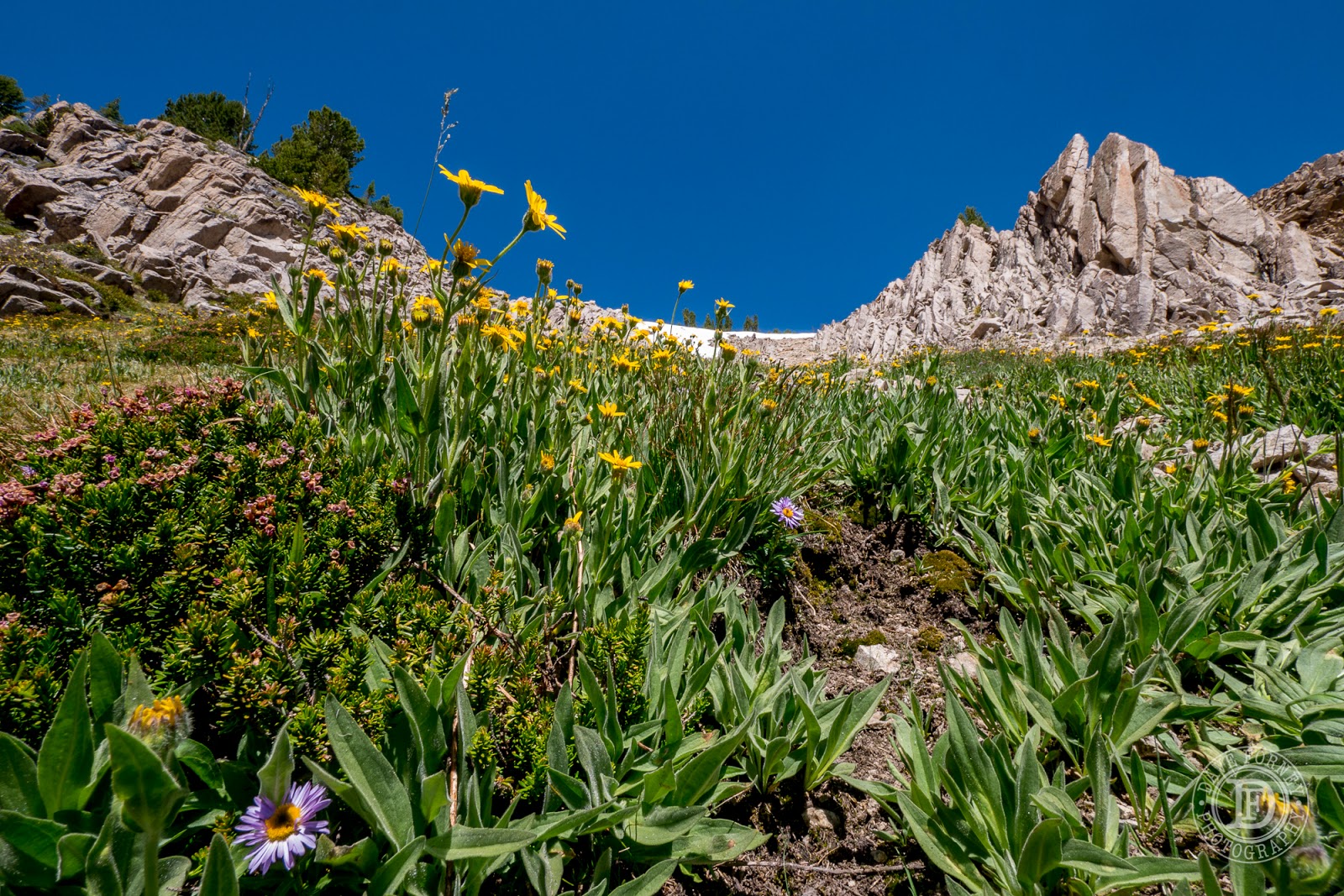 Smoke from a distant wildfire lingers over a high meadow full of flowers, on our first evening in the White Clouds Wilderness. After crossing the mountains that you can see in the distance we left the smoke behind, and didn't see it again until we left the area five days later. 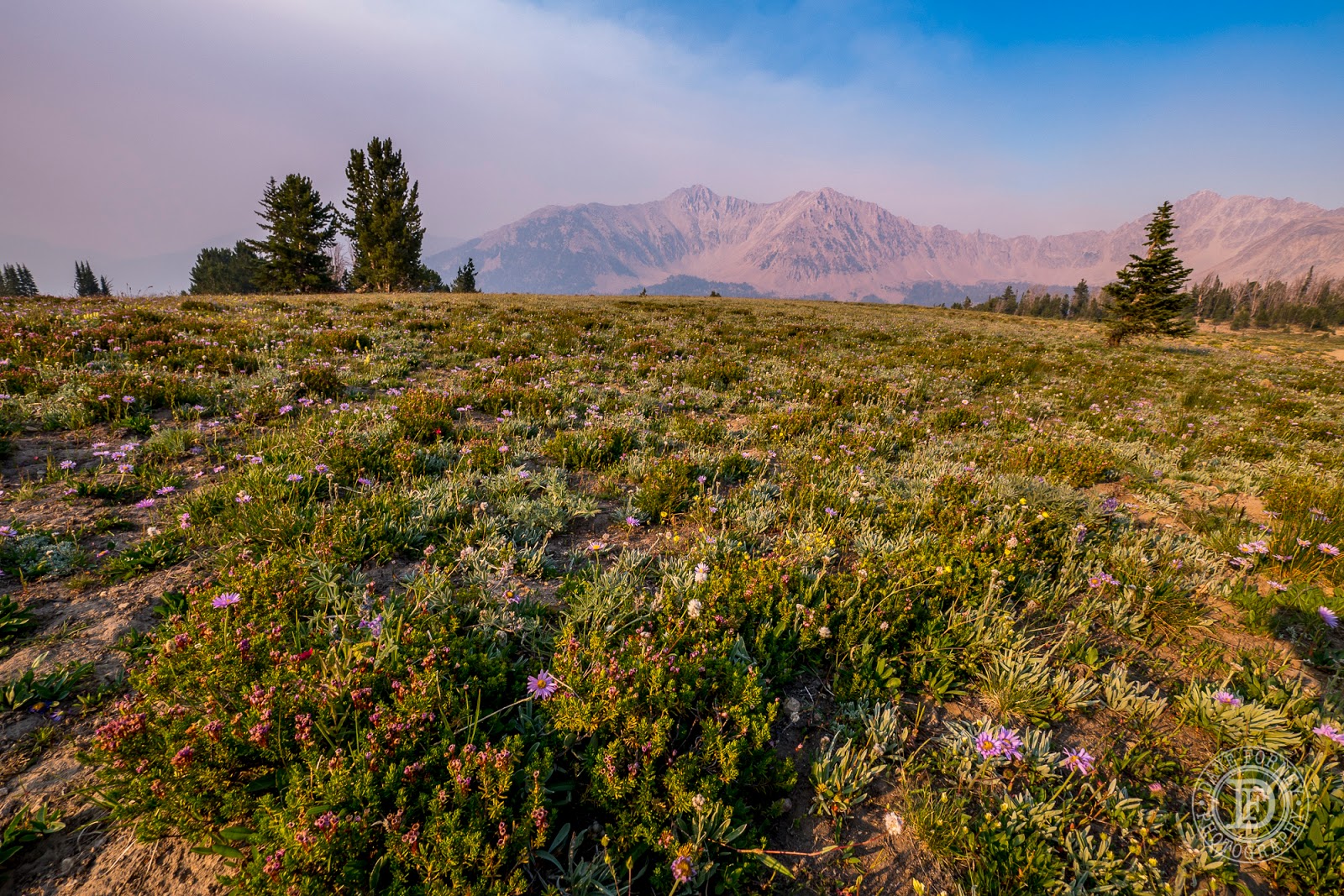 The colors were amazing! 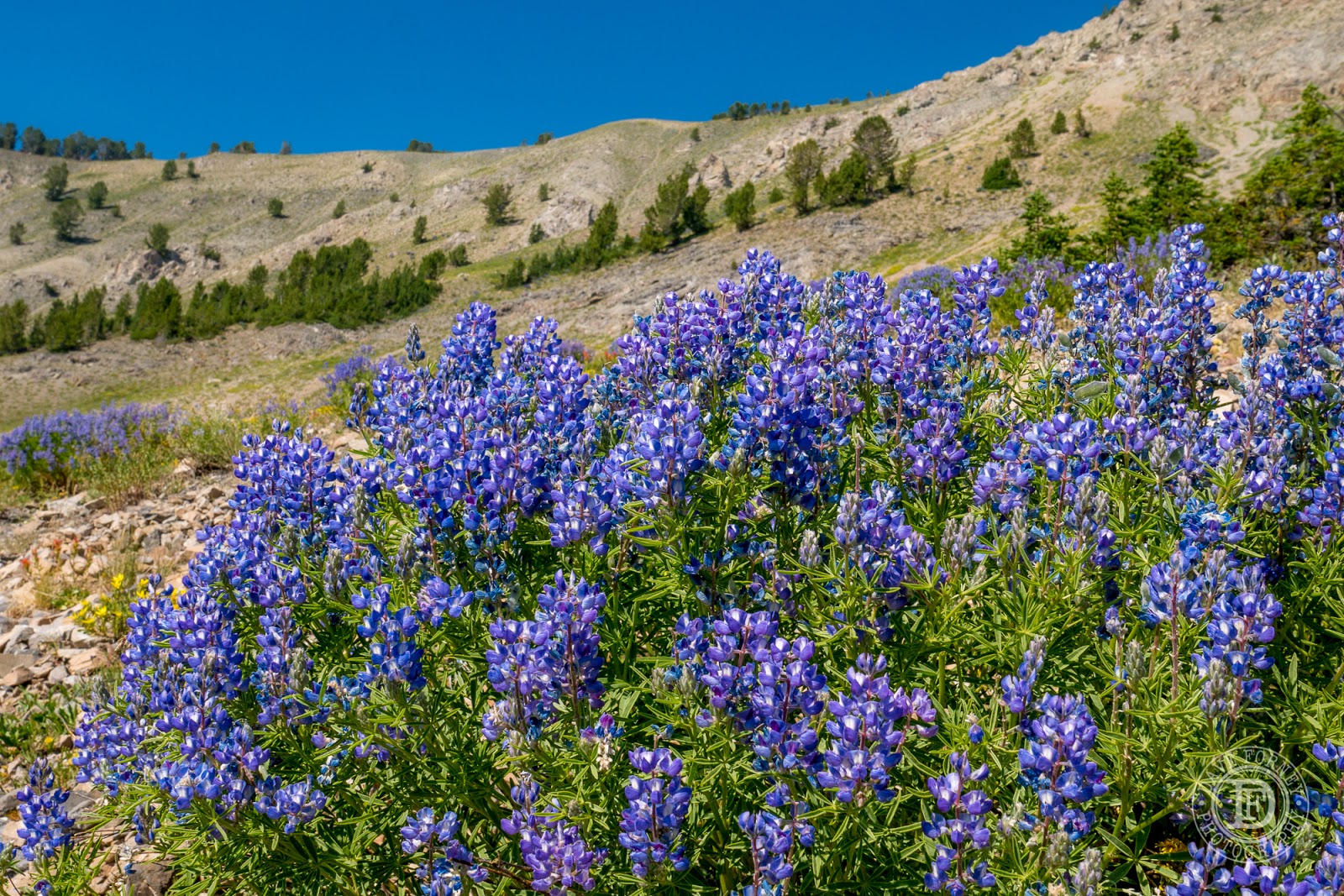 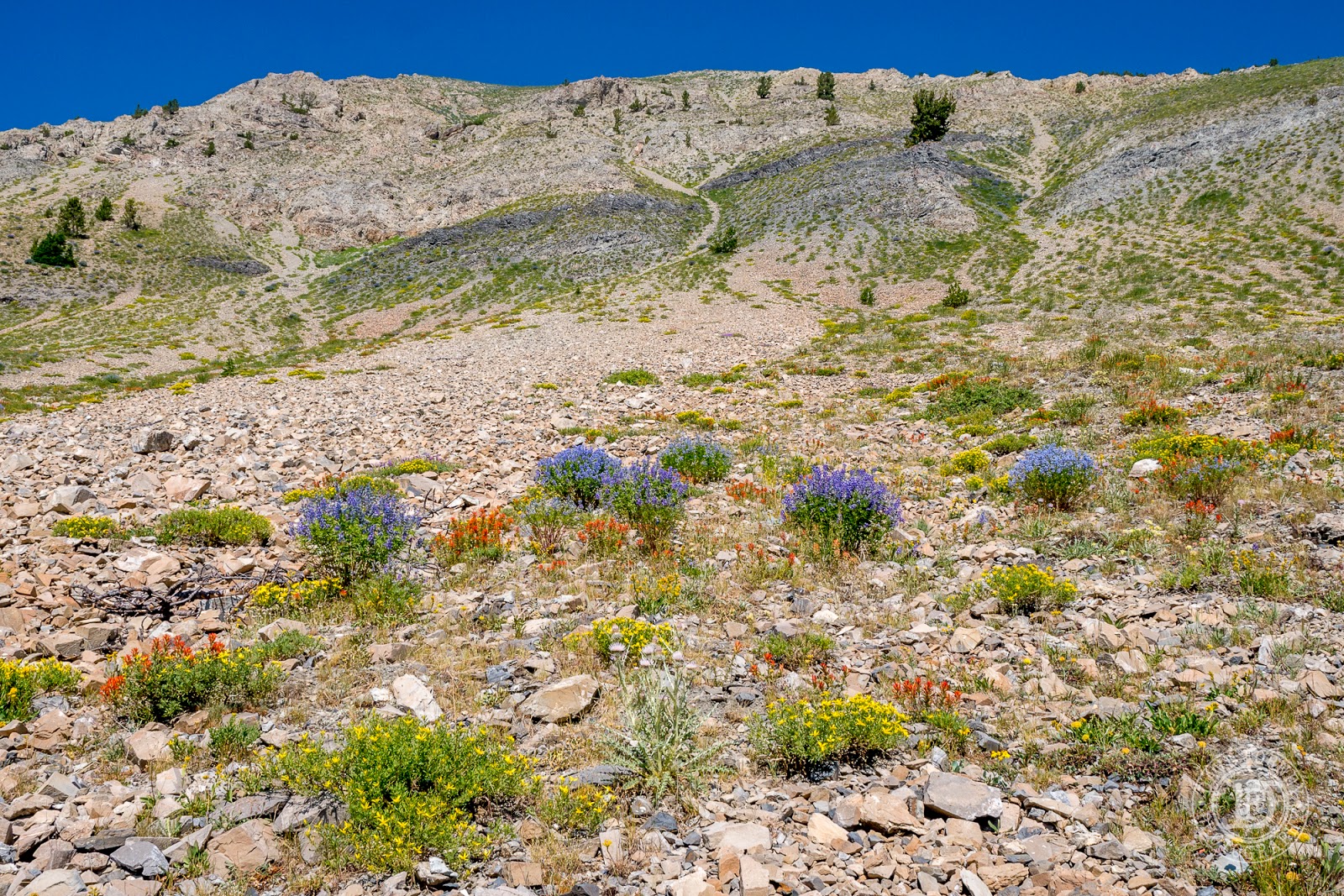 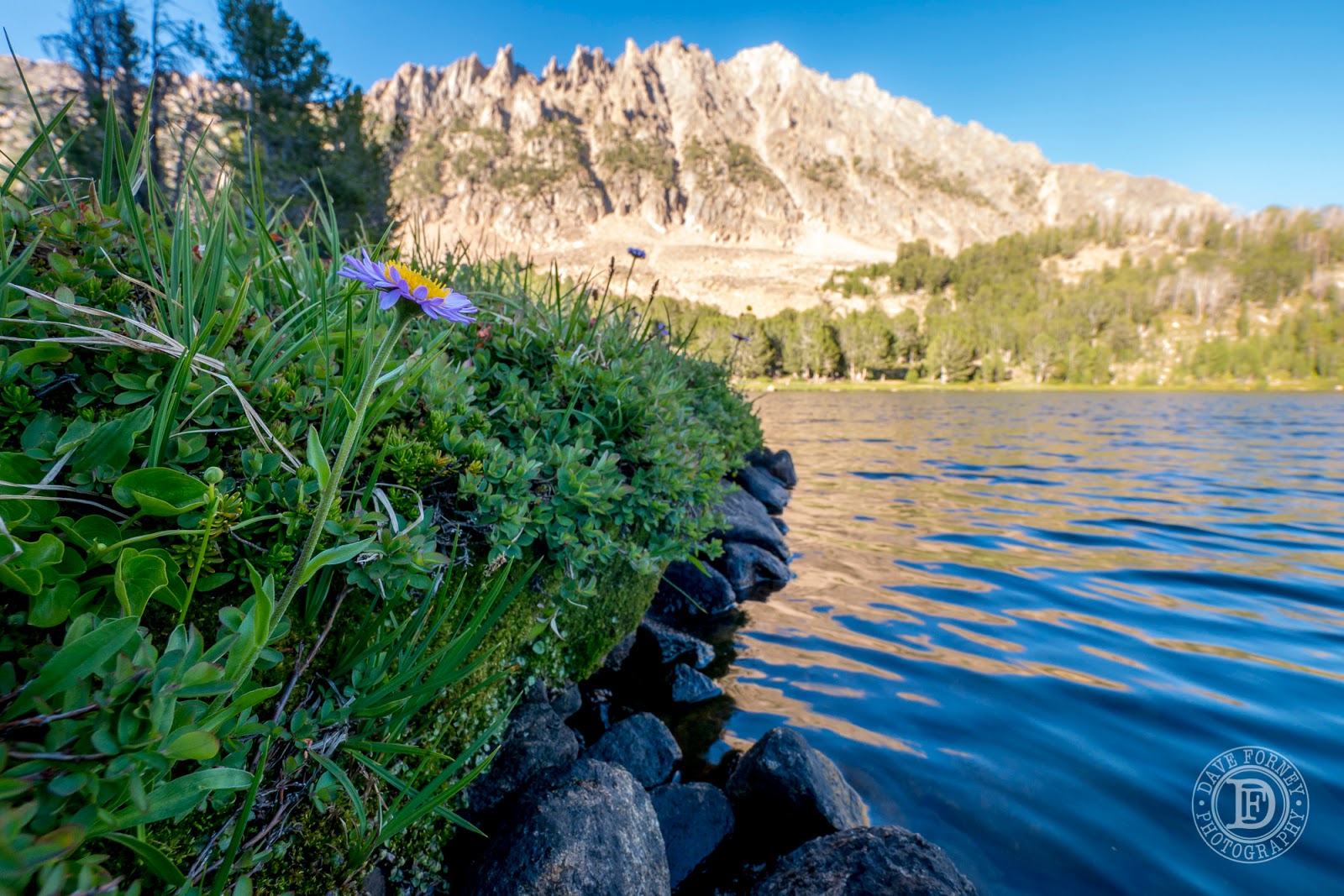 I mentioned that I would also show you some of the animals we saw. We saw lots of small animals--squirrels, gophers, chipmunks, etc., and plenty of amazing birds. But I don't have any pictures of those because I was never able to get my camera out before they fled.

Probably the animal we saw the most of was fish--trout to be specific. Beautiful, back-country trout swam happily in many of the crystal clear lakes. We had a lot of fun fishing--catching and releasing many beautiful trout along the way. Here's a shot of Hudson, casting his spinner into the cold waters of a high alpine lake. 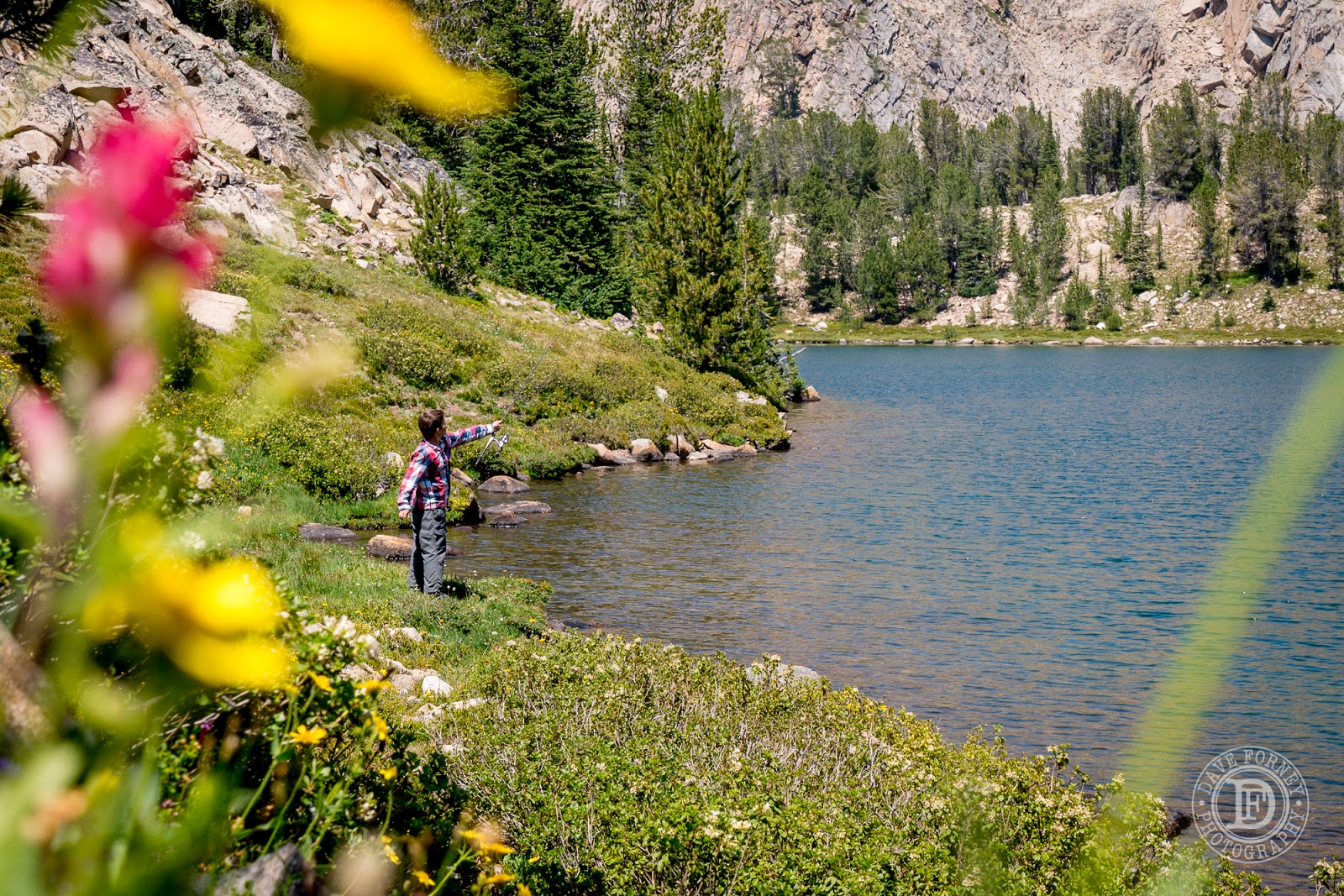 And another, wider, shot (can you spot Hudson on the far bank?) to give you perspective of our gorgeous surroundings here. The entire White Cloud Peaks Loop could be done comfortably in three or four days. However, we took five days to do the full loop, pushing hard on some days so that we could enjoy some side excursions and fishing on other days. Near the end of our time we took one full day to rest and enjoy some fishing and camping at the Chamberlain Lakes, below. They were absolutely incredible. 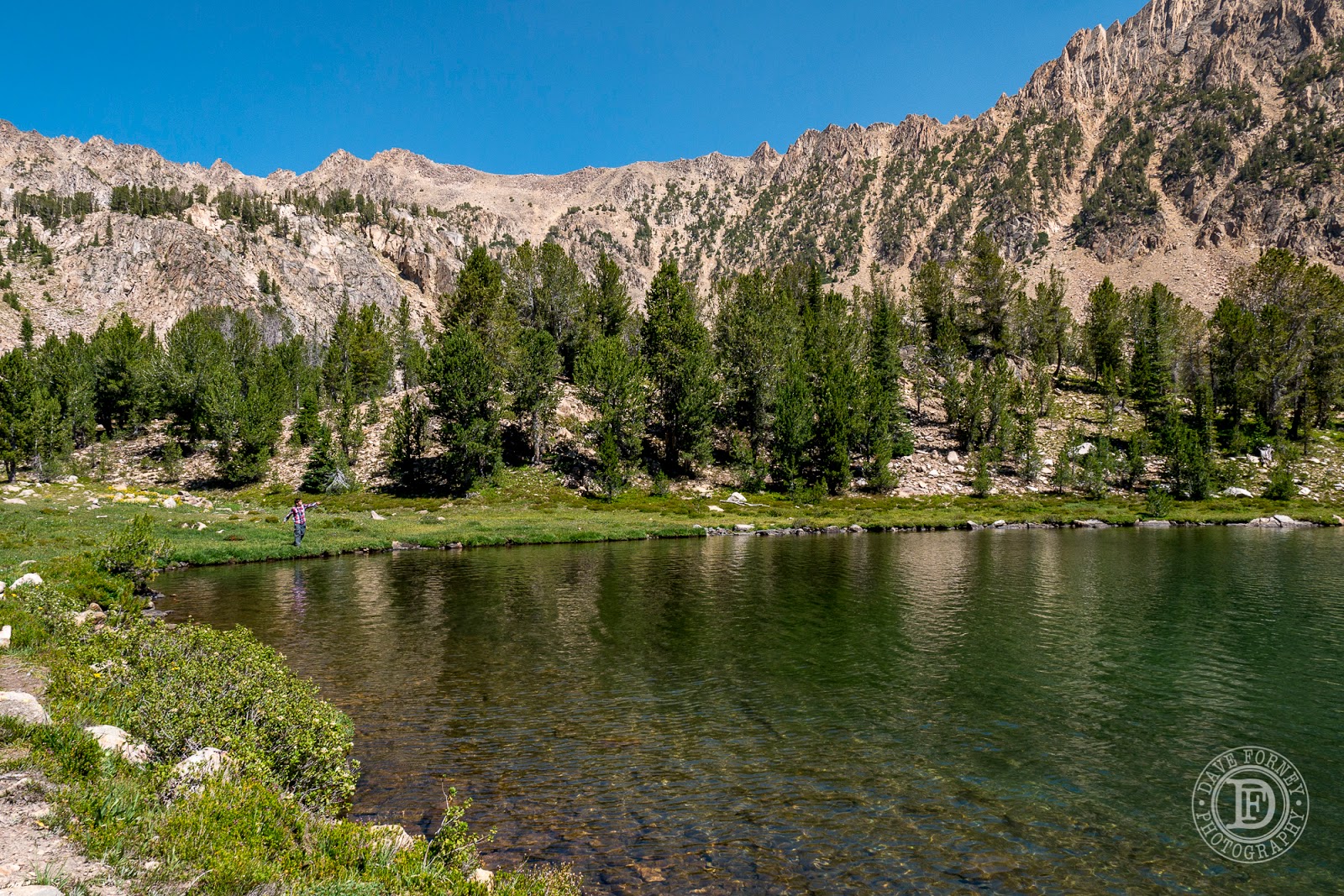 We both caught dozens of trout, but Hudson caught the biggest one, a beautiful cutthroat that put up a tremendous fight. At the beginning of our trip he really didn't know how to even cast a line. By the end, he was a pro, having cast and reeled hundreds of times into holes where you could see the trout pursuing the spinners and spoons all the way in until they struck. I haven't enjoyed good fishing like that since my childhood in Brazil, when my own father used to take me into some remote rivers in the Amazon, and we pulled out peacock bass one after another (along with the occasional piranha.) 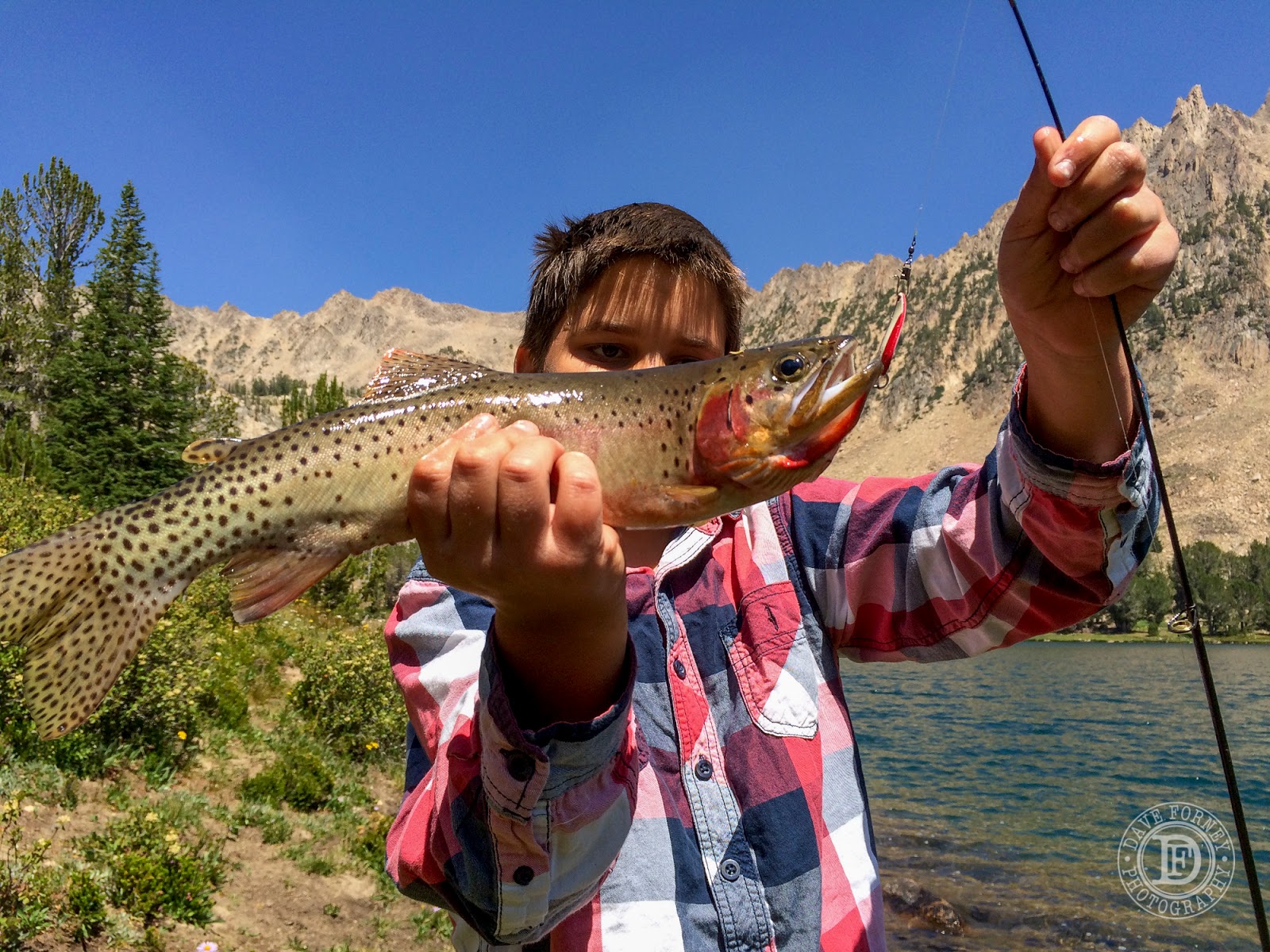 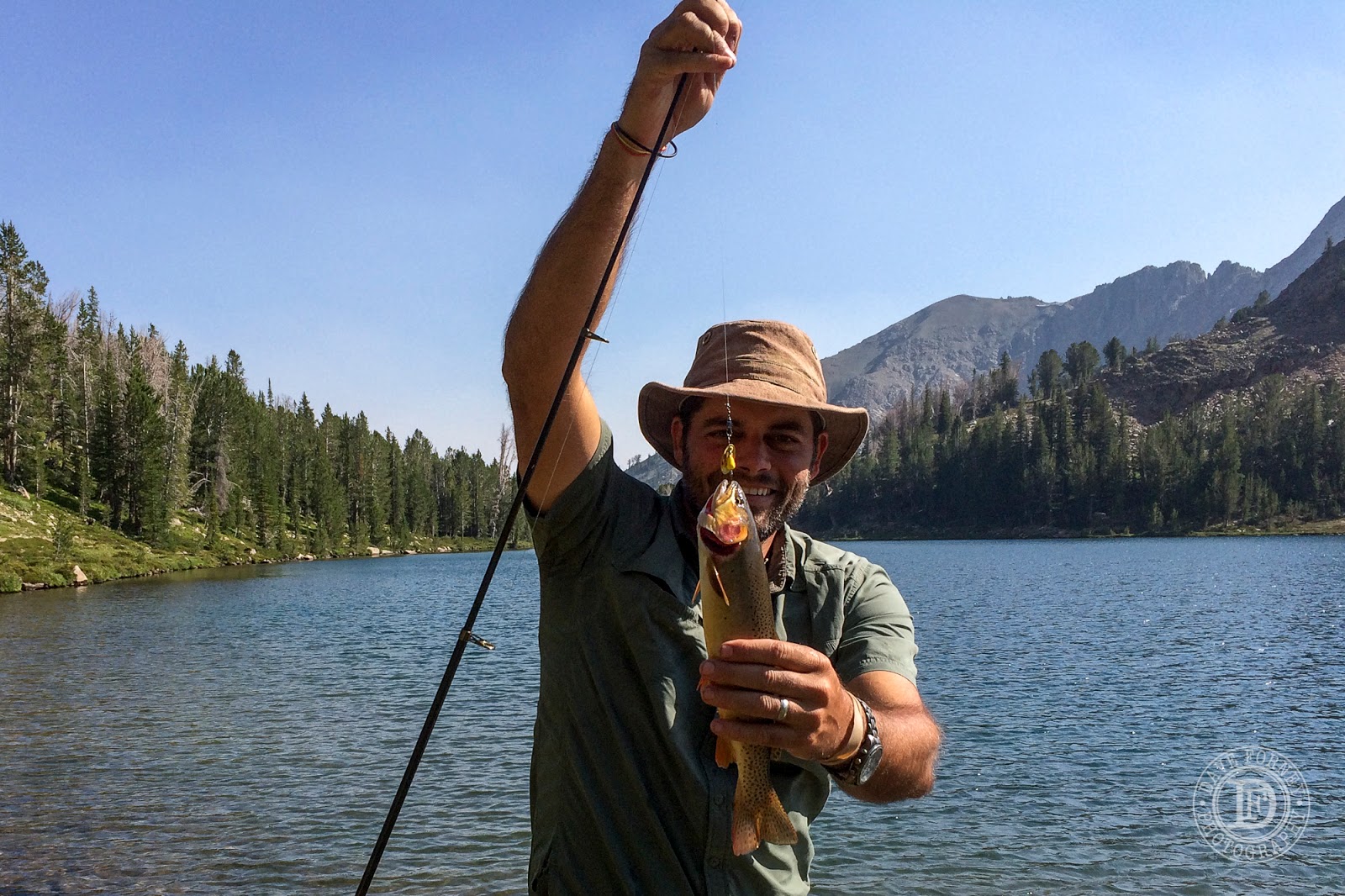 Here's a few more shots of us fishing, surrounded by God's beautiful creation. 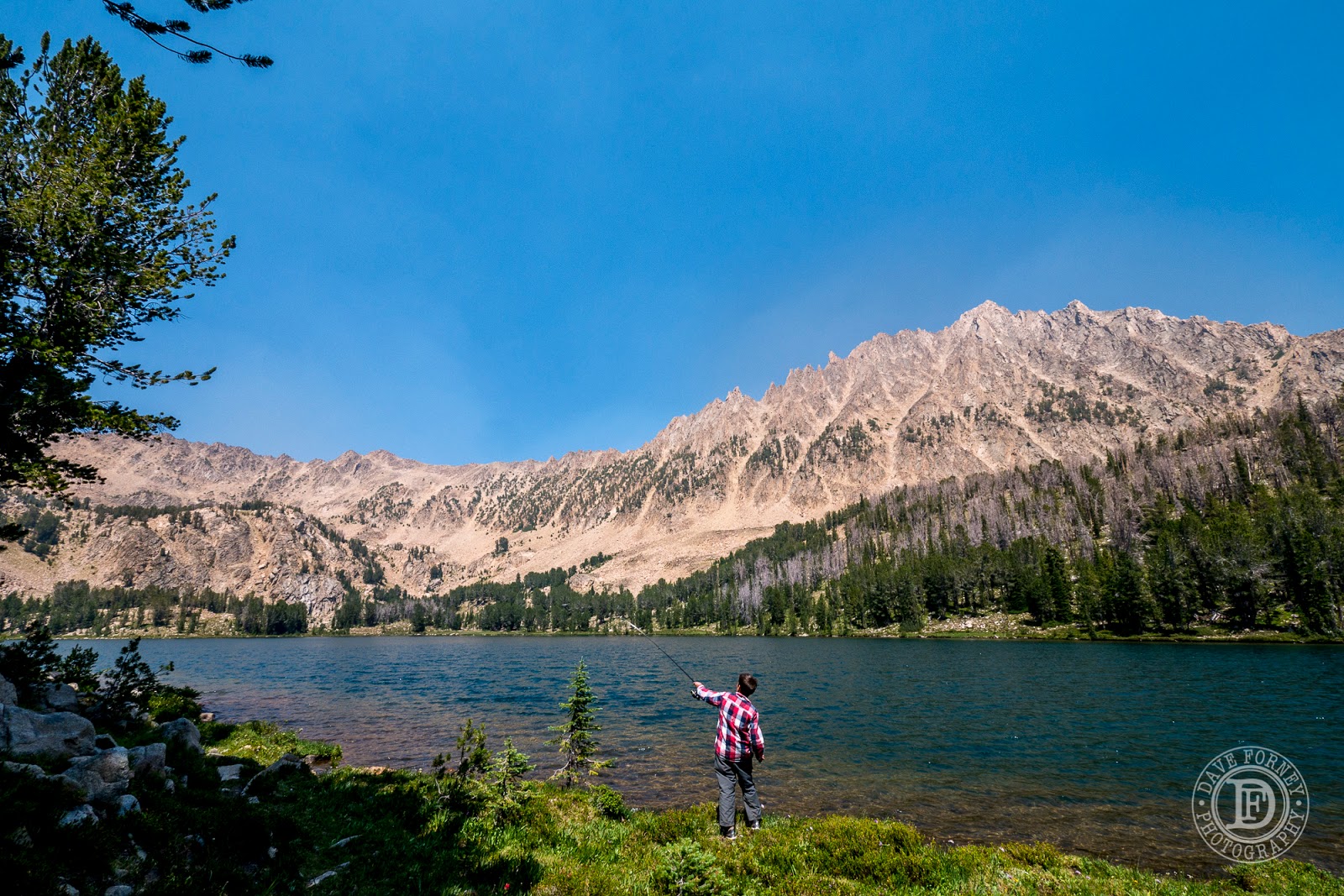 Can you spot Hudson in the photo below? He's standing on a rock, in the sun, on the far bank of the lake. Our camp was just inside the trees on the right hand side of the photo. Not a bad place to spend a night or two! 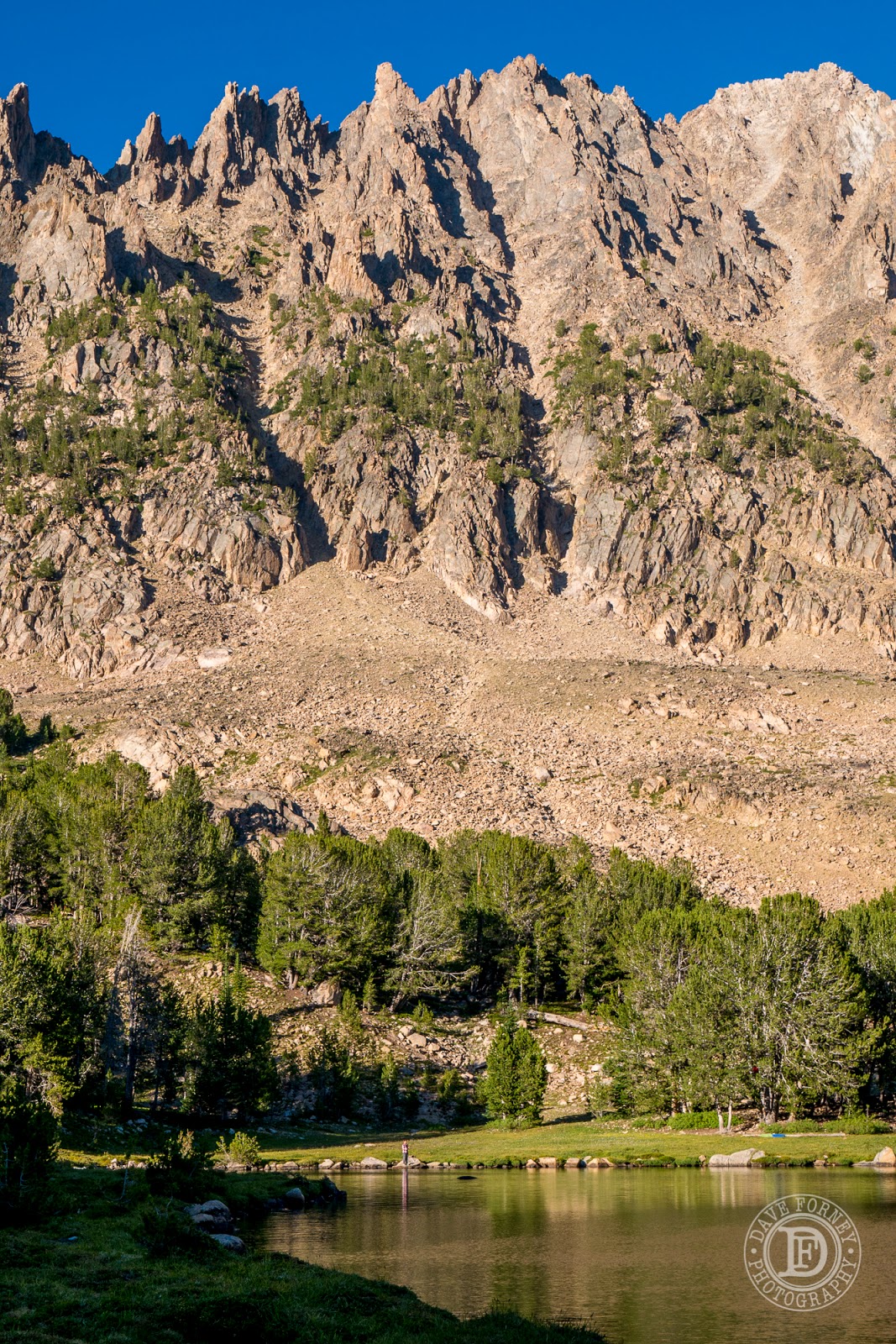 After I did the trek through the jungles of Borneo, with my oldest son, Britt, back in late 2012, I made a "Man vs. Wild" style home movie about our adventure. It's nothing fancy, but I took video shots all along the way, and then threw it together with some music and later we watched it as a family and had some great laughs and fun as we watched the the memories unfold. For Britt, it was great fun to re-watch the adventure he and I had from the comfort of the living room. For his mom it was a chance to freak out at all of the "horribly dangerous things you guys did that could have resulted in death..." (but all the while beaming with pride and love, on the inside, for the courage and accomplishment of her 'boys'.) And for Britt's younger siblings, it was a great opportunity to celebrate with (and be a tad jealous of) their older brother, while at the same time looking forward to their own future adventures with their dad.

Well, in that movie , Hudson saw his older brother jumping into all of the rivers and waterfalls in the jungle, at every chance he got. To be fair, it was very hot and humid in the jungle, and we were constantly sweating and stinking there--so it was only natural to want to cool off in any and all leech-infested water we found along the way. But conditions here in the Rockies were not the same--we spent much of our time above 9,000 feet, and the temperatures were cool to cold. All of the water was freezing cold! However, Hudson, not wanting to be outdone by his older brother, was determined to jump into the lakes to prove that he was just as 'tough' as Britt.  Of course, that meant that I had not choice, but to also jump in, as I wasn't about to be the only one chickening out.

So, one day we chose a very deep, very cold, very clear lake at almost 10,000 feet of elevation and stripped down to our birthday suits. Sorry if that's too much info, but that's part of the story. We wanted to have dry clothes when re-emerged, freezing cold with teeth chattering. Haha. Anyway, the funny thing is that, there we were, standing naked on a large rock in the middle of nowhere, building up our courage to jump into the icy water, when Hudson suddenly points to the other side of the lake and gasps. My first thought was that he saw people--we hadn't seen anyone in the past several days, but that would be just our luck to have someone walk out right about then. But it wasn't people that Hudson was pointing at. It was mountain goats. I don't know how he spotted them, as they were incredibly camouflaged against the white granite rocks. But there they were--about eight of them, not more than a hundred yards away. I think they were as startled as we were--but probably slightly more appalled at seeing us in that state, than we were of seeing them. Haha. I wished I'd had a longer lens with me, but this is the best I could do with what I had. Anyway, we enjoyed watching them for several minutes as they drank from the lake, before heading back up the rugged rock cliffs behind them. Can you see them in this shot? They are right in the middle, just below the cliffs, and just above that large, flat rock. Trust me, they are there... just incredibly well camouflaged. 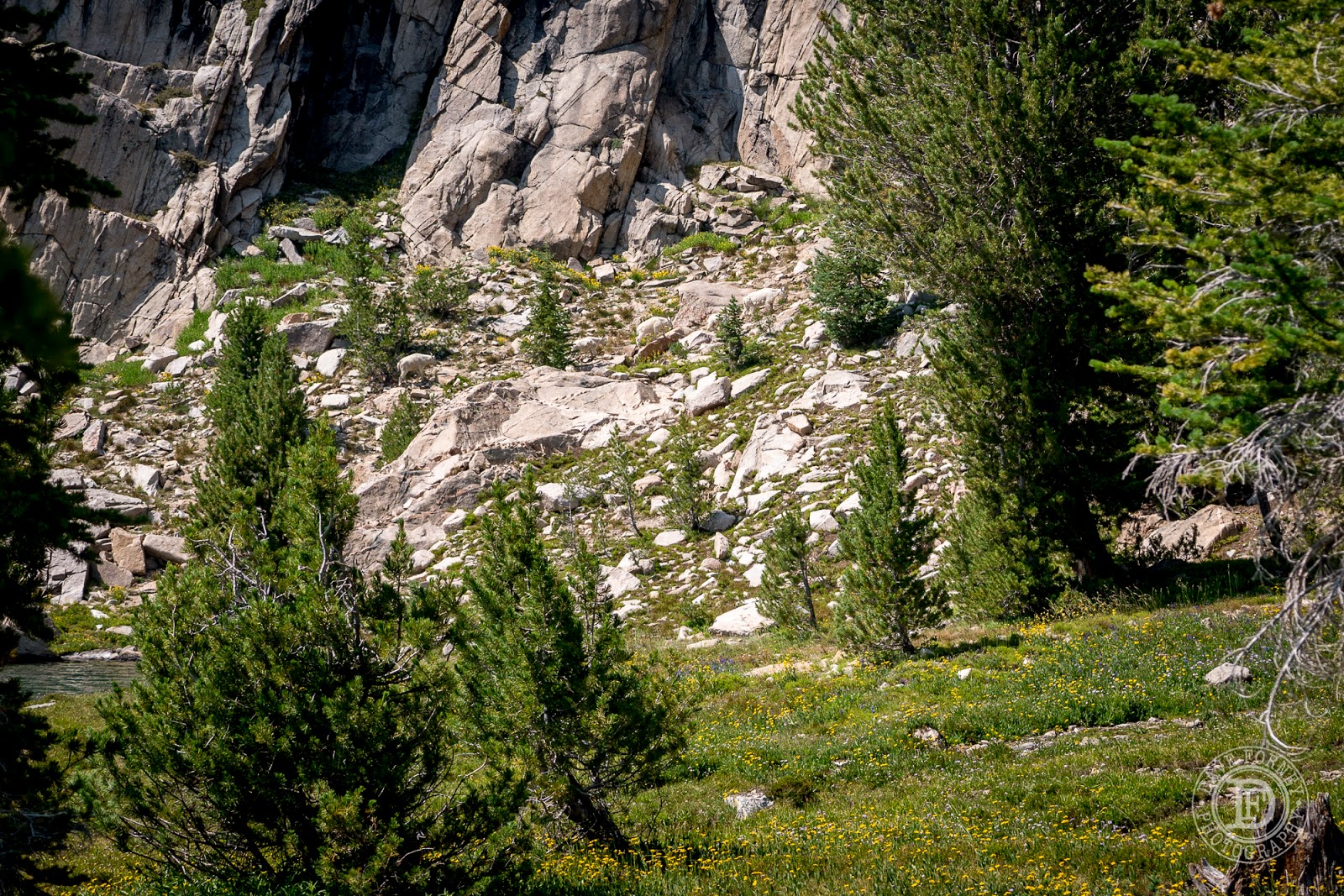 We also saw a nice mule deer buck one evening. Again, I wished I'd had a longer lens, but still I think you can spot it right in the middle of the shot. 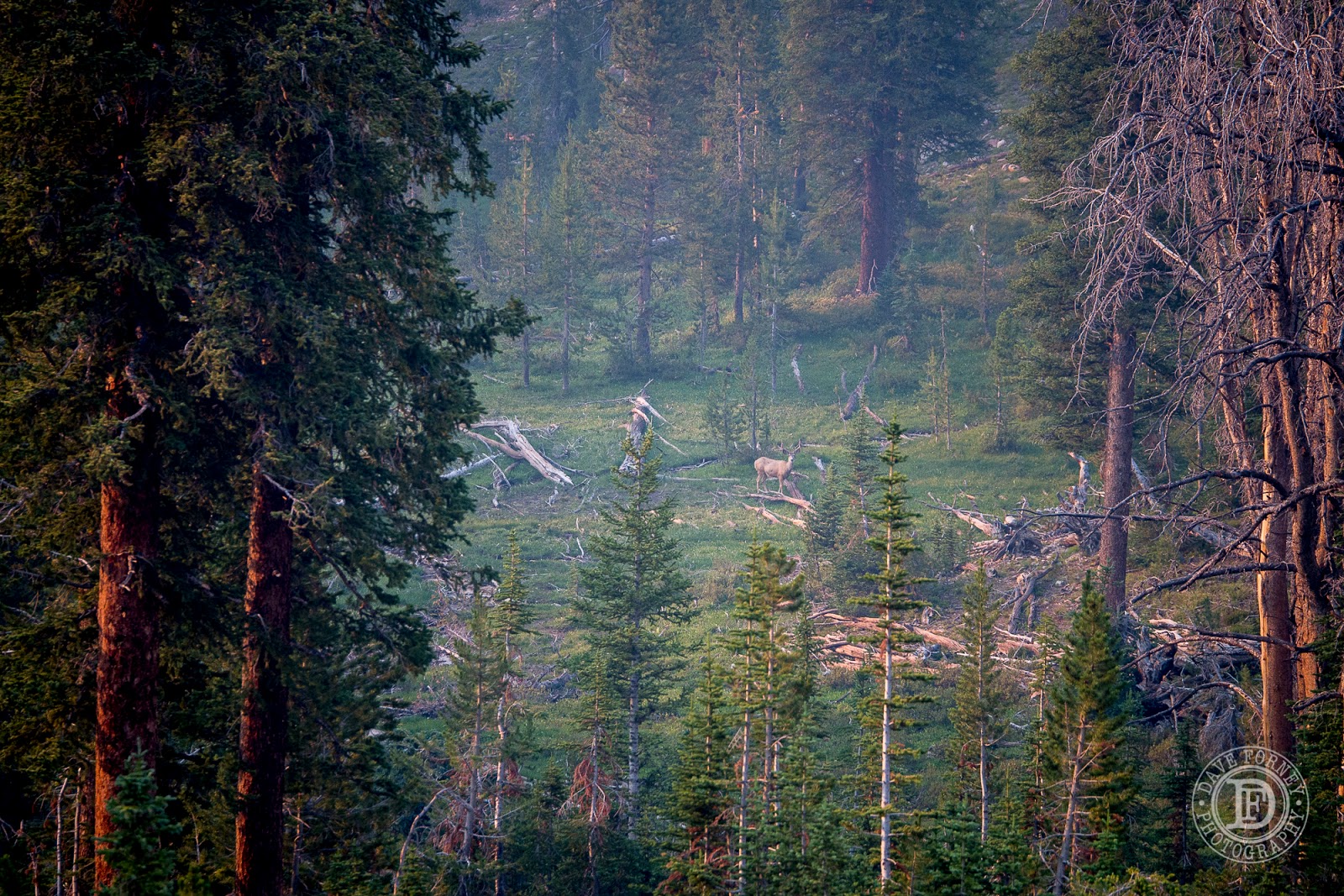 Aside from that, we saw many fresh tracks of Elk, more mule deer, and even wolves. We also heard some wolves howling, but we never saw them.

And one evening as the sun was setting, we had a deer visit our camp, staying just five or ten meters away for about a half hour as we quietly watched.

Check back soon for one final post where I'll share some parting shots of our trek into the White Clouds Wilderness of Idaho.
Posted by Dave at 10:21 AM No comments: