I'm currently in Chad, where I'm flying for the MAF Chad program for three weeks. Their plane is currently down in Uganda getting some major avionics upgrades, so we've lent them one of ours (one of the MAF Uganda planes) for the time being. However, being that the loaned plane is registered in Uganda, they needed a Ugandan-licensed pilot to come over here and help to fly it. That's where I came into the equation. Yeah! :-) Meanwhile, Joy and the kids are holding down the fort in Uganda. 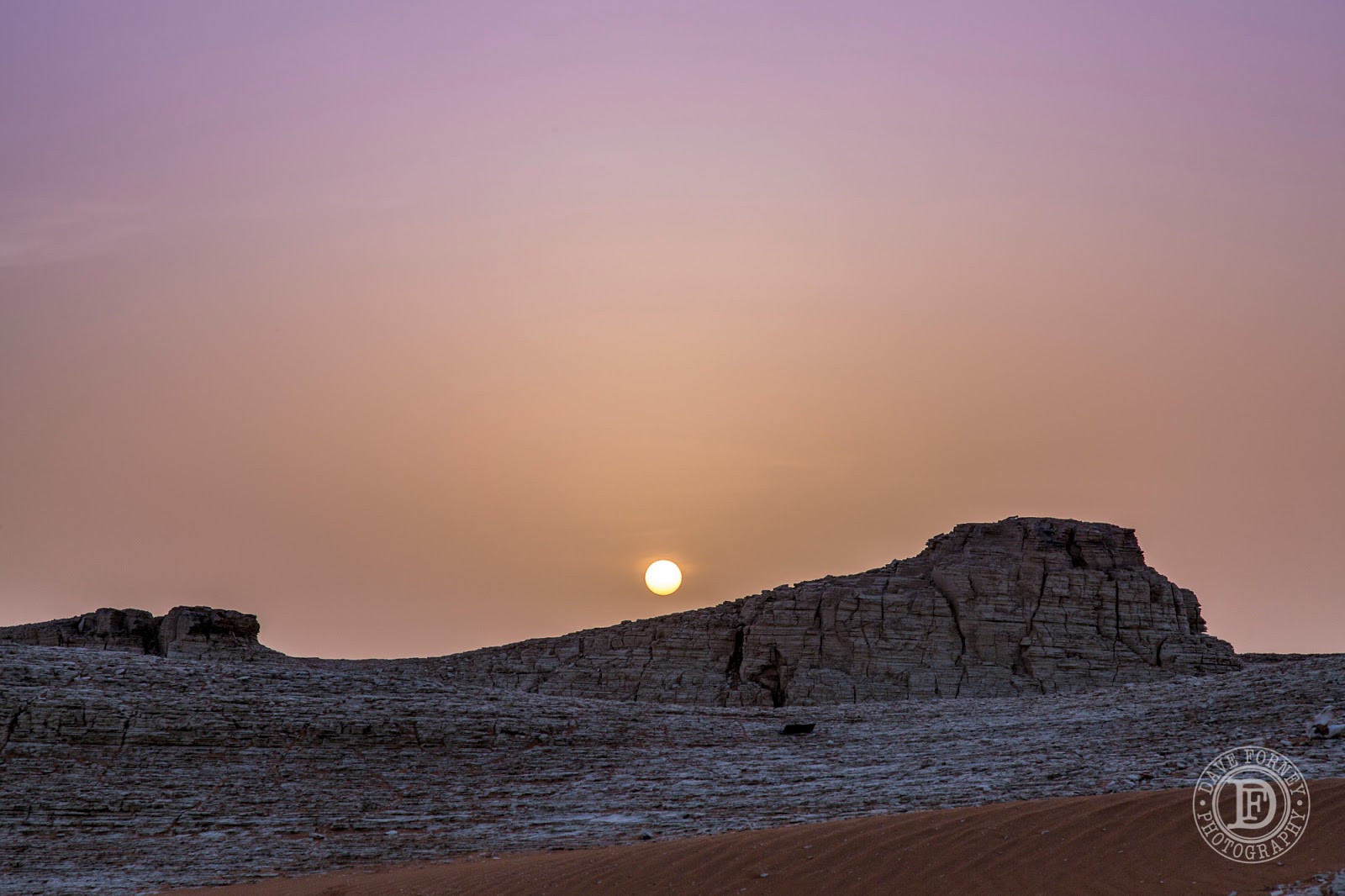 These shots (the one above and the two below) were taken just moments before the sun dipped beneath the western horizon of the Saraha, where I spent a night last week. It was a surreal, mysterious beauty--reminding me a lot of the desolate, boreal forest and barren tundra, north of the Arctic Circle, where we called home for two years shortly after my first son was born . Only this was a LOT HOTTER! But it sports the same ephemeral, harsh beauty, which is both intriguing and frightening all at the same time. I like it. 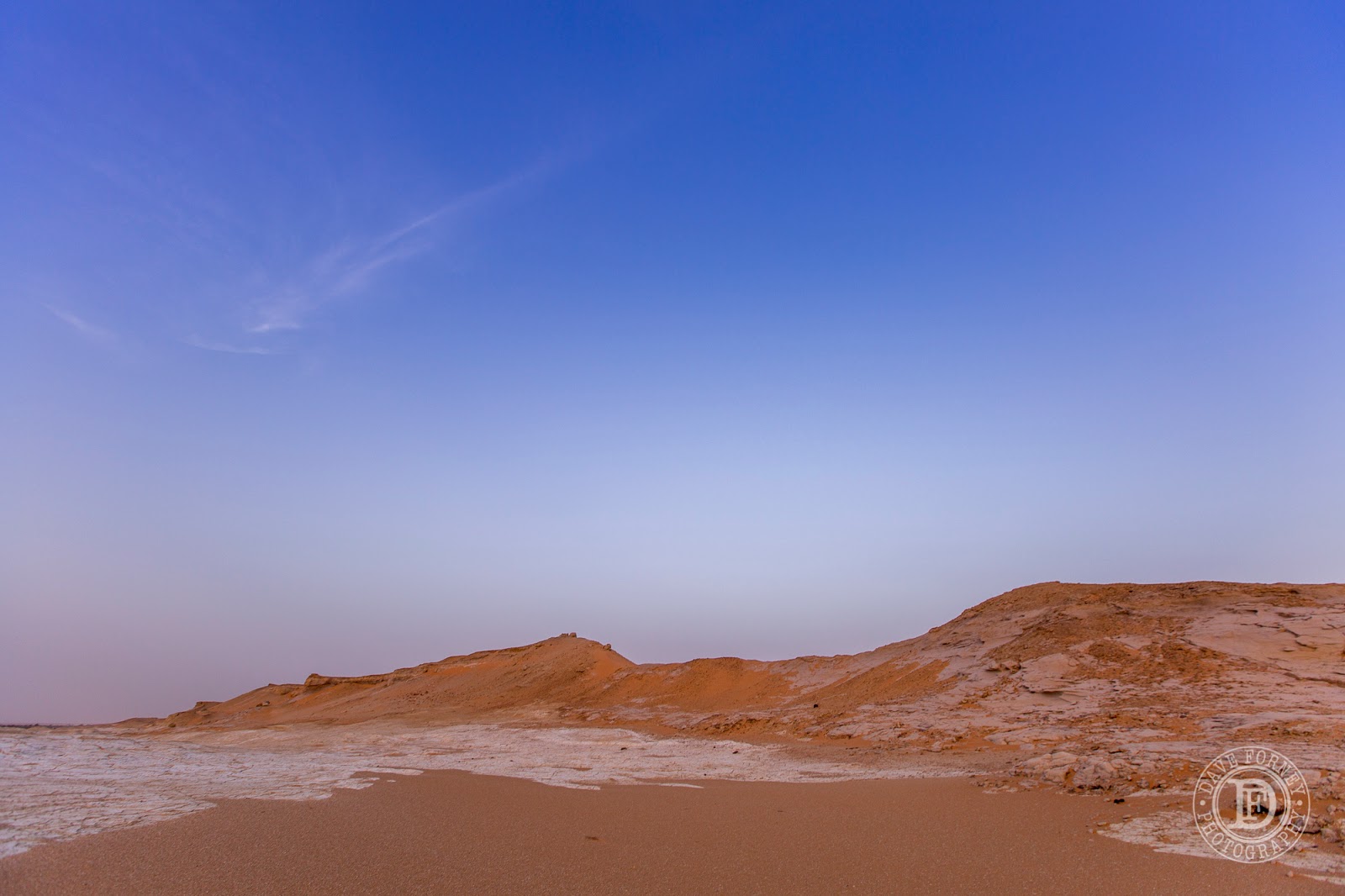 Don't be fooled! Behind the veil of this beautiful, fleeting sunset is a desolate, deadly desert that can, and does, kill without hesitation. The land offers no compassion to the traveller. Nothing is promised but the extremes--extreme heat, extreme thirst, extreme distances. Of all of the places in the world where I've flown or travelled, this has to be one of the most impressive, not in its overall grandeur, but simply in its overwhelming vastness--its blatant hostility to life.

Truly, for someone like you or me, not having been raised with the special skills and training needed to survive in this unforgiving land, if we were to be stranded out here, alone, it would be no different than if we were abandoned on the surface of the moon. The inevitable outcome would be as certain and final as it would be quick. This land gives no quarter to the weary traveler. There is no mercy for the week or lost. This is the Sahara! 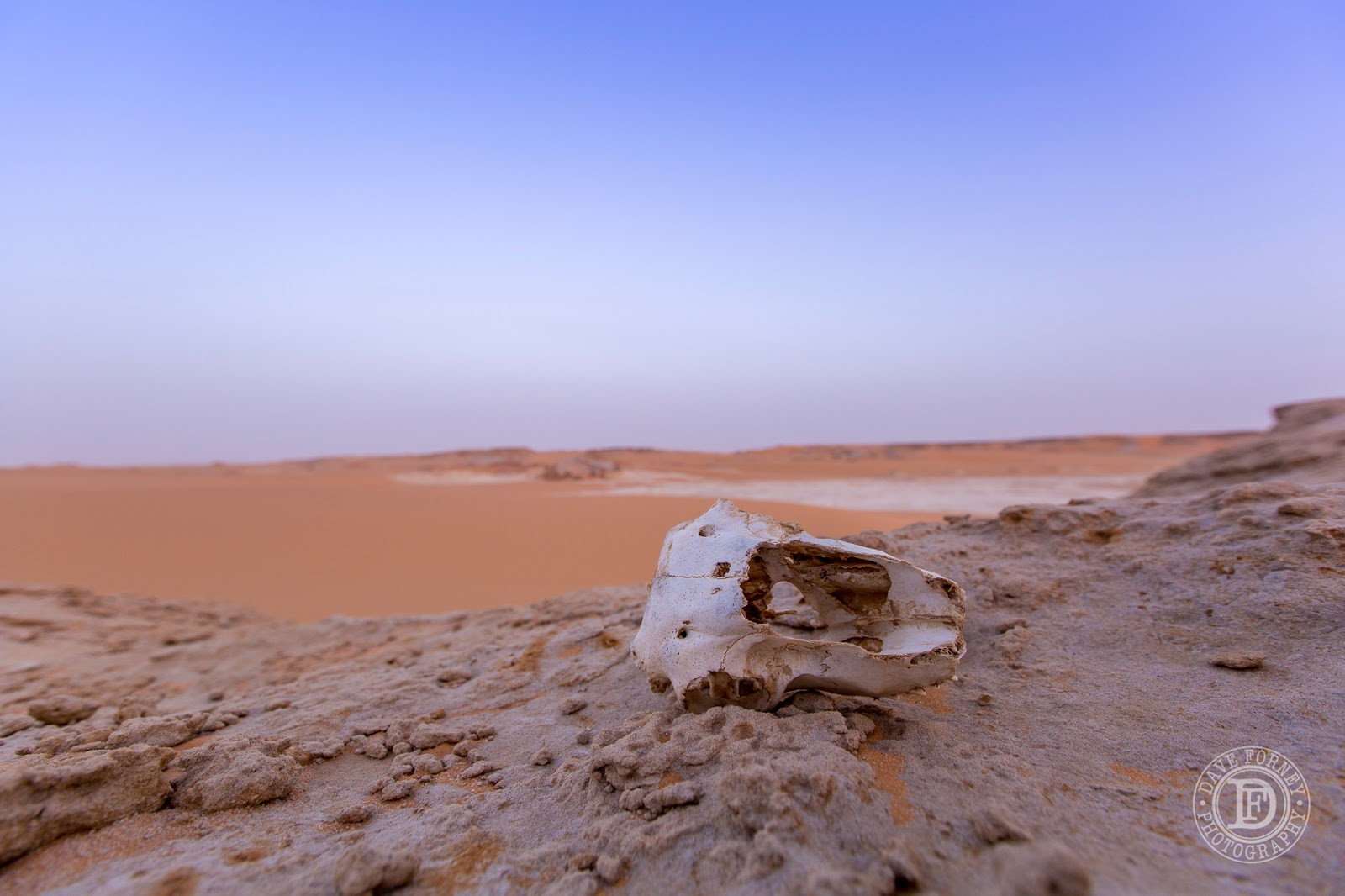 From 10,000 feet above, it appears as an endless ocean of sand, stretching as far as the eye can see in any direction. On my first flight here, when I departed from the capital city in the "green" part of the country, the Cessna temperature gage (having been in the sun for barely 15 minutes), registered a rather toasty 135°F (57°C). However, the official temperature from the control tower (not in the sun) was a much more pleasant 116°F (47°C). Imagine how hot it was down on the surface of that endless sand, under the blazing rays of the desert sun? 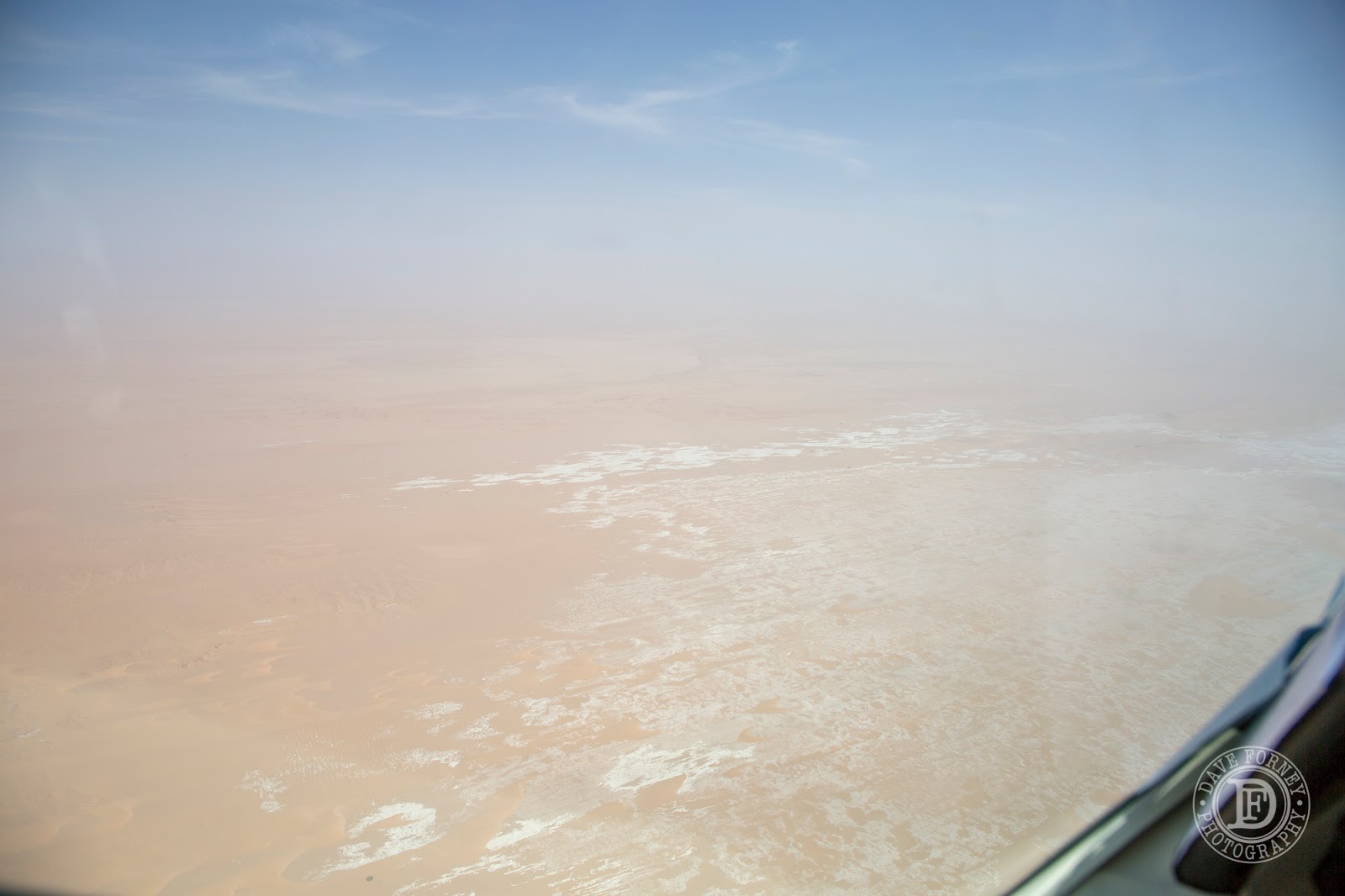 On the surface, its a mixture of various types and colors of sand and rock, constantly being shaped and weathered by the fierce, hot winds that rip across the land. I found this area particularly interesting. It was a very chalky substance (indeed it looked, felt and even tasted--don't ask--like chalk) bisected by cracks and lines of red sand. 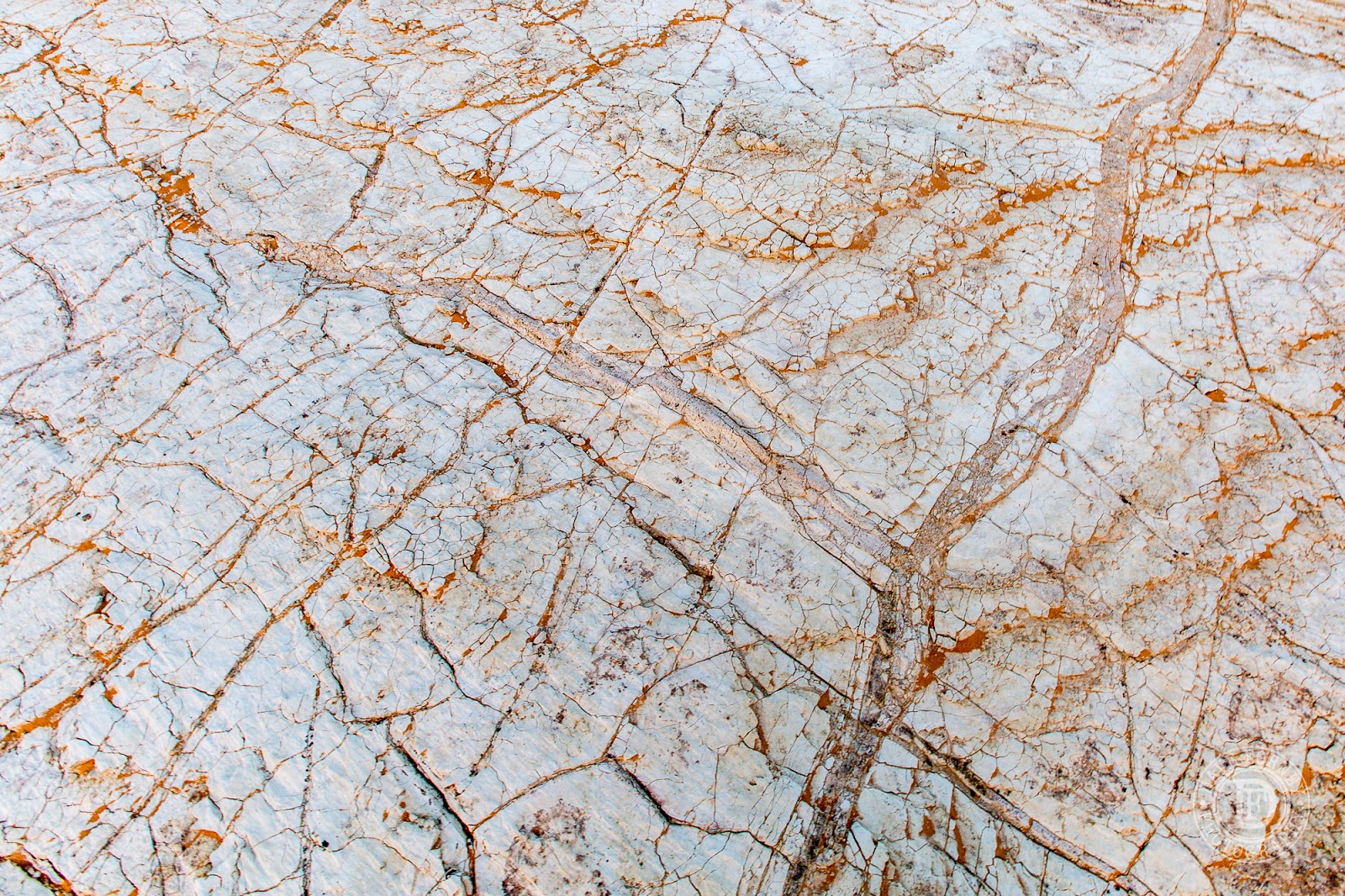 There are very few roads in Chad, and even fewer that would be considered 'safe'.  To venture far into the desert by vehicle, is to risk your very life. Even here, in the relative safety of the isolated oasis village of Faya, I saw numerous trucks broken down, or hopelessly bogged, in the constantly shifting sand dunes. From the air we saw many more. And this was in the village itself, or on the immediate outskirts of the village.

It took us three, safe, relatively comfortable hours (even at cruising altitude it's still very hot!) to fly to Faya in the MAF Grand Caravan. But can you imagine what it would take to drive those same, nearly 800 kilometers, through the scorching, ever-shifting desert sands? Brutal! Perhaps even deadly. 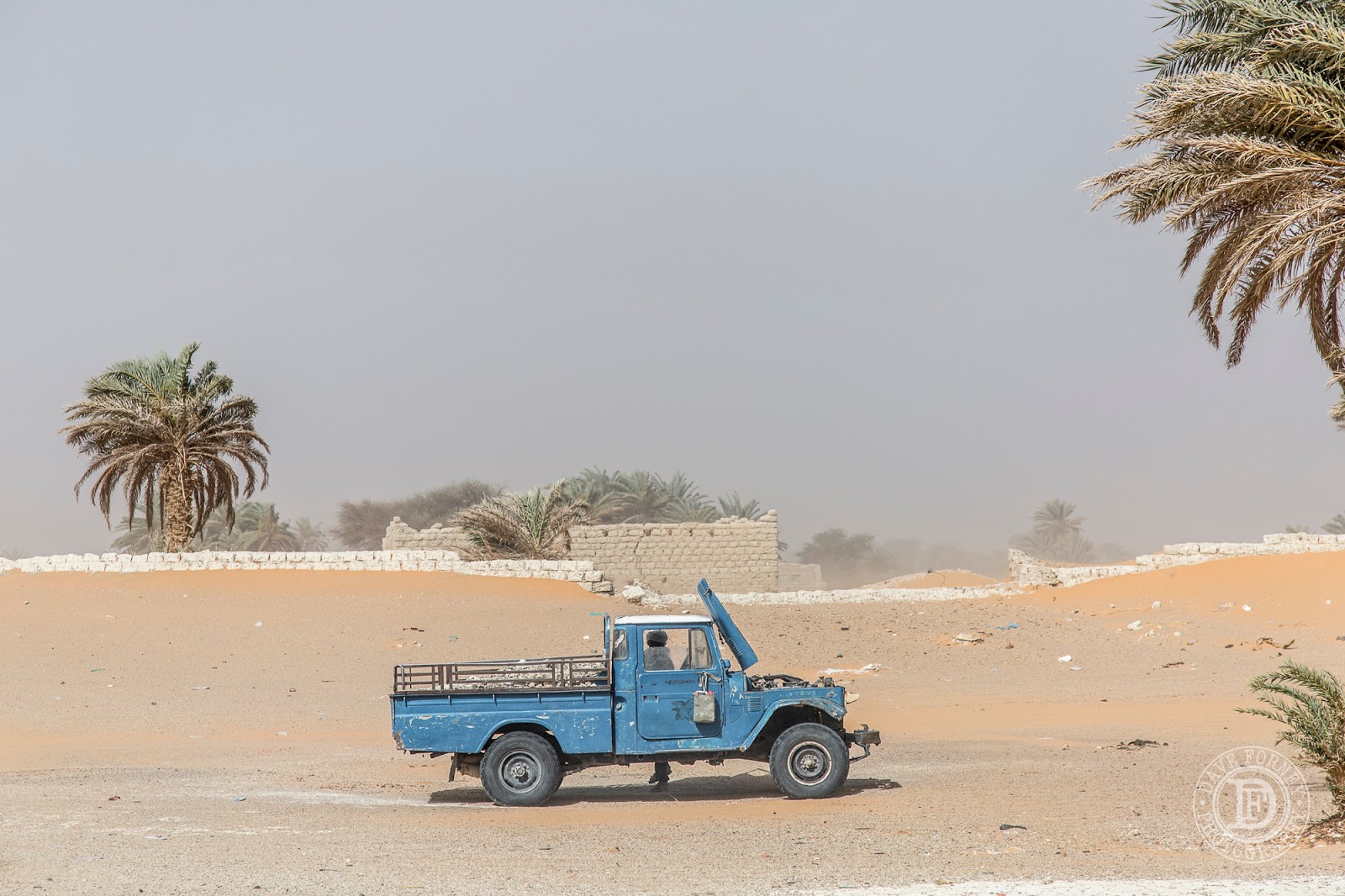 The truck above has obviously been around for a while, but even new, properly outfitted 4x4 trucks don't handle these extremes well for long. And they are very expensive to maintain and operate. Thus, most locals simply walk, often using a more reliable, if slower, donkey or camel as their 'truck'. 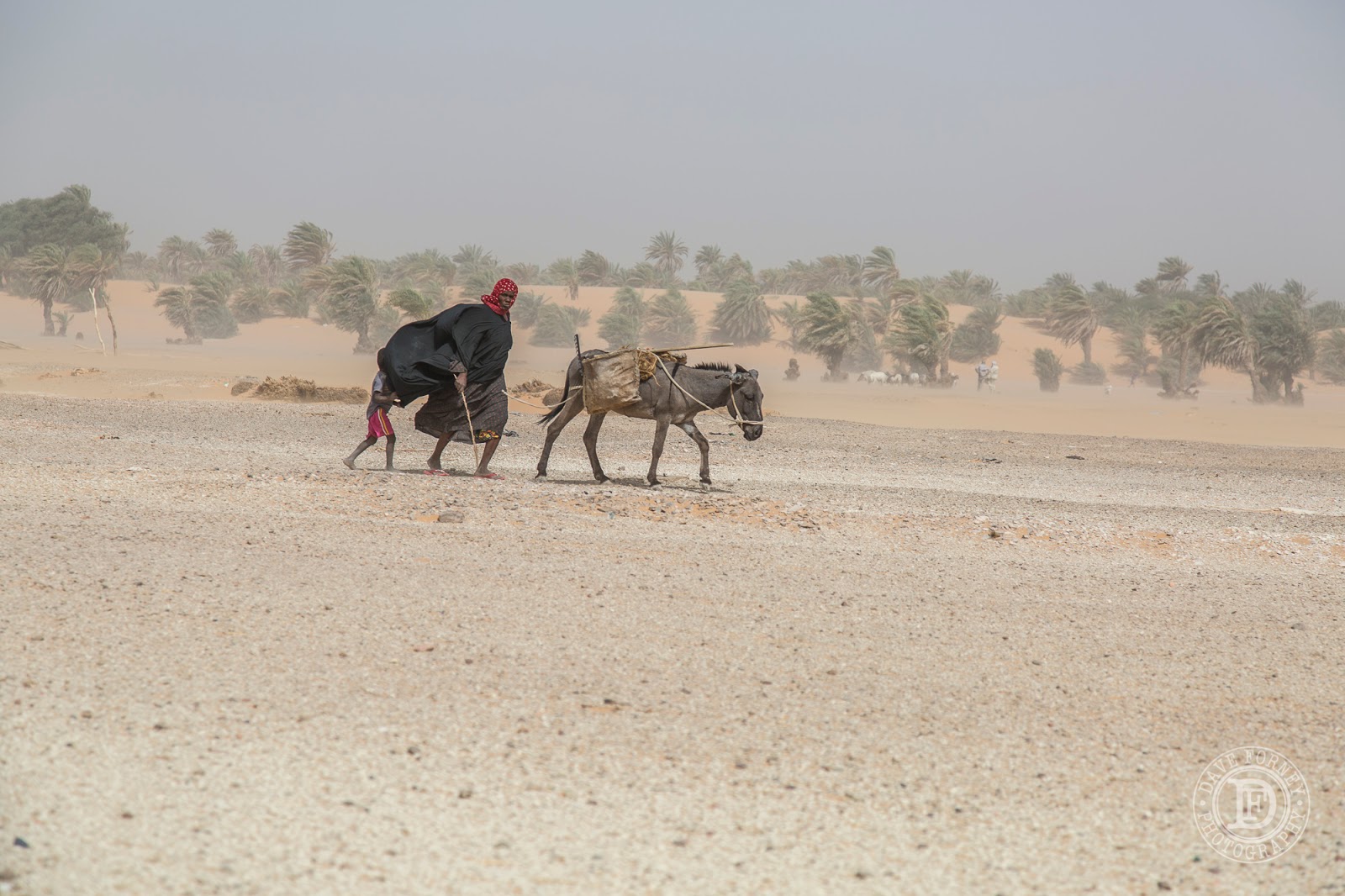 The palms, in the shot below, indicate that there is water beneath the surface of rock and sand. Where there is water, there is life--trees, animals, people--they can all be found, and tend to congregate where there is water. The fuzzy sun, and the orange sky are due to the sand and dust that was whipped thousands of feet into the air, from howling winds that had just subsided a half hour or so before I took the picture. This little sand storm was relatively minor compared to what the Saraha can, and does deliver. This one lasted through the night and into the next day, with winds of 25-40 kts. It blew sand into our eyes and ears, and into all of our stuff, as we tried to sleep on 'mattresses' placed on woven matts that were directly on the sand floor of an open, woven hut.  But really, it wasn't that bad. Compared to the infamous storms that the Saraha is famous for, this was merely a small taste of what could have been unleashed, without warning, anywhere across this rugged land. 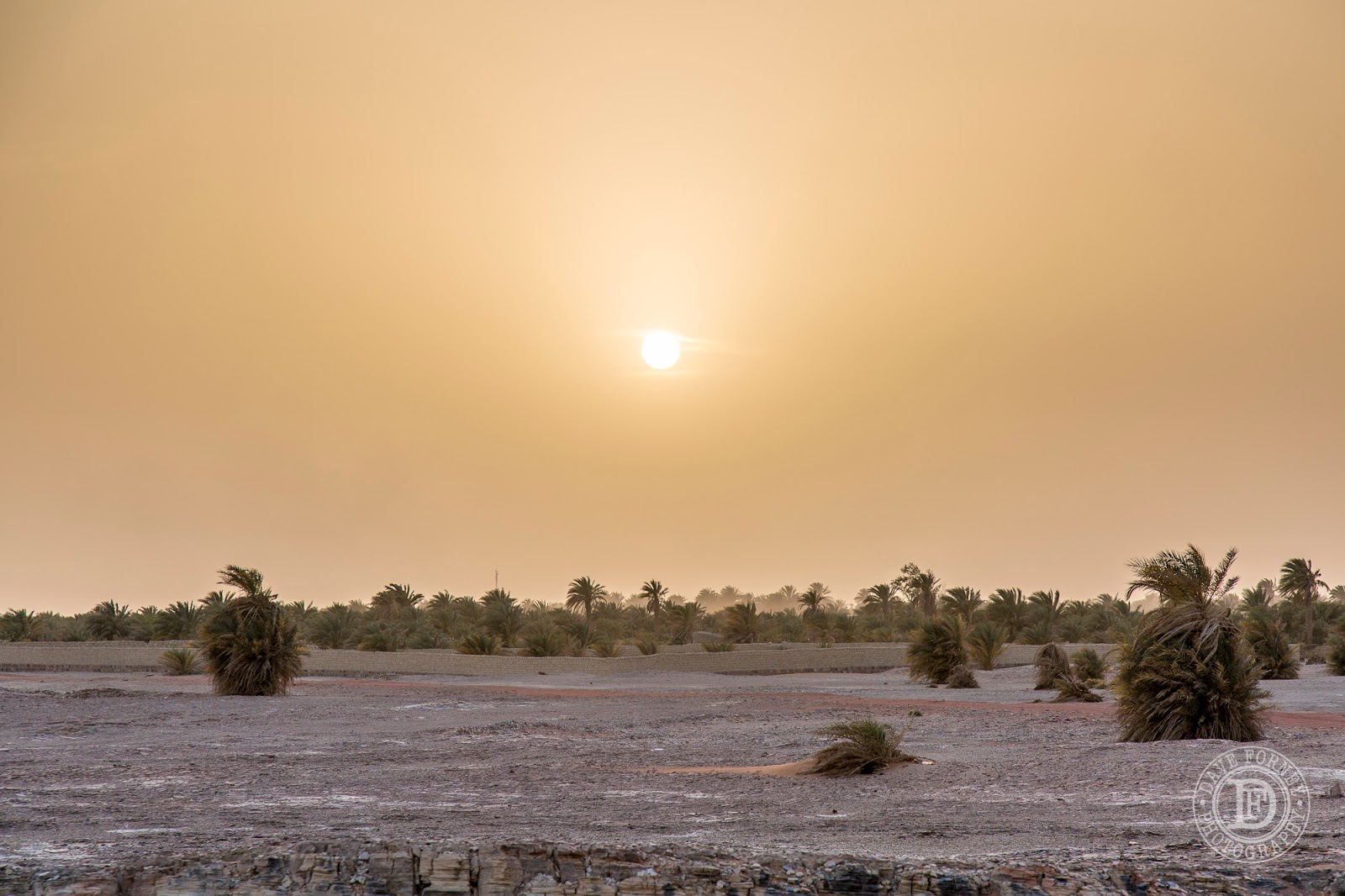 Here is the group we flew to Faya. It was a very interesting and unique opportunity. We had some of the highest, most respected leaders of the Christian Church in Chad, together with an Imam who is an equally high and respected Sheik in the majority Muslim population here in Chad. In a very unusual and bold move, the Pastor and the Sheik have decided to work together to try to spread a message of peace and reconciliation (non-violence) between Muslims and Christians throughout Chad. If it sounds like a much bigger story, and one which involves some very complex and multi-faceted issues--well, it is! But I don't have time to write it all now, and I need to save something for later. But suffice it to say that this was a ground-breaking and courageous trip, which had the blessing of the governor and religious leaders of both faiths in the area, and was facilitated through a generous flight subsidy from MAF. In fact, the trip to Faya would almost certainly not have happened if not for the help of MAF. The team was very grateful to MAF, and they treated us (fellow MAF pilot, Andrew Mumford, and me) as part of their own group. 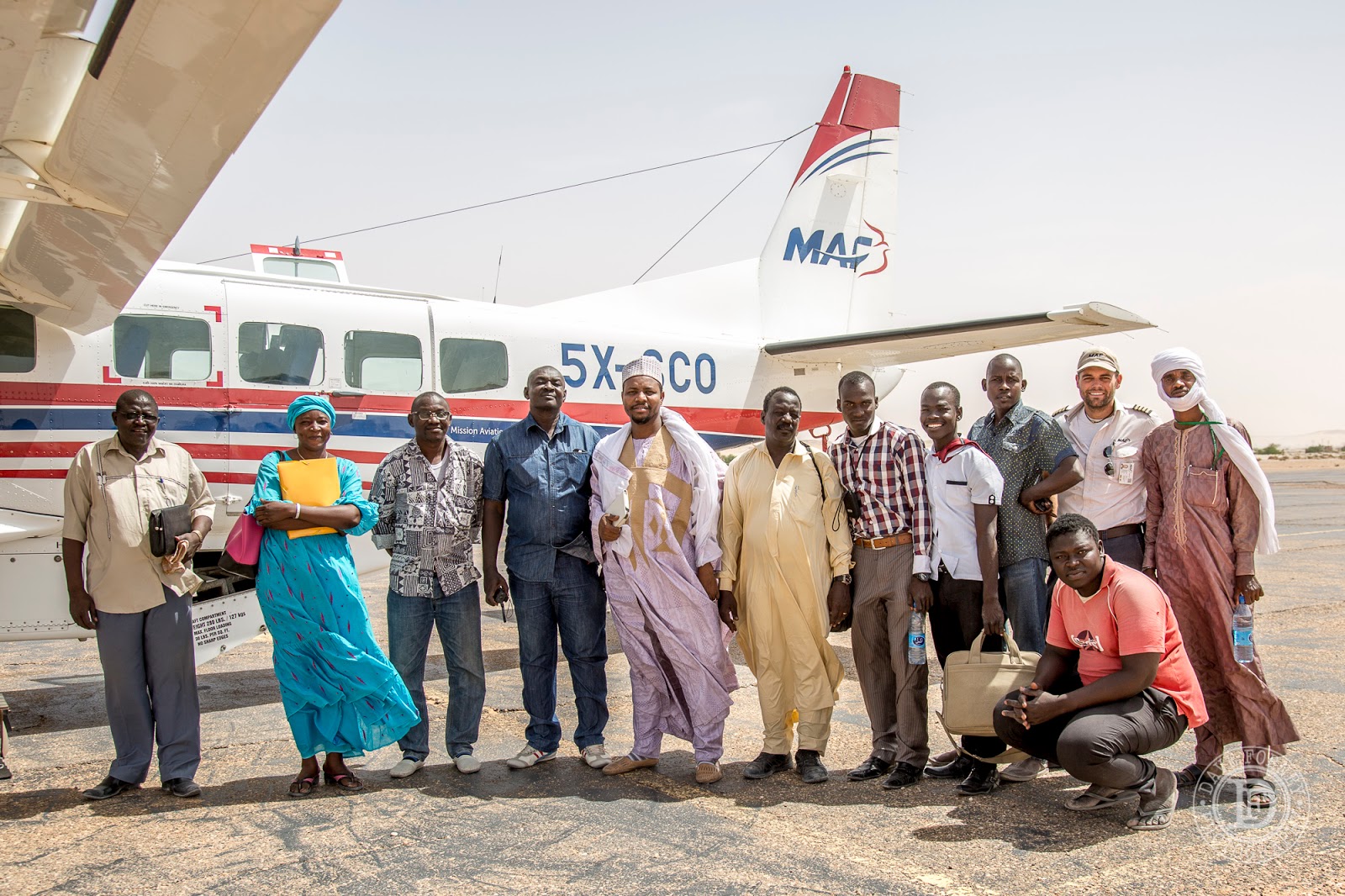 Here's a few shots from around the village of Faya. 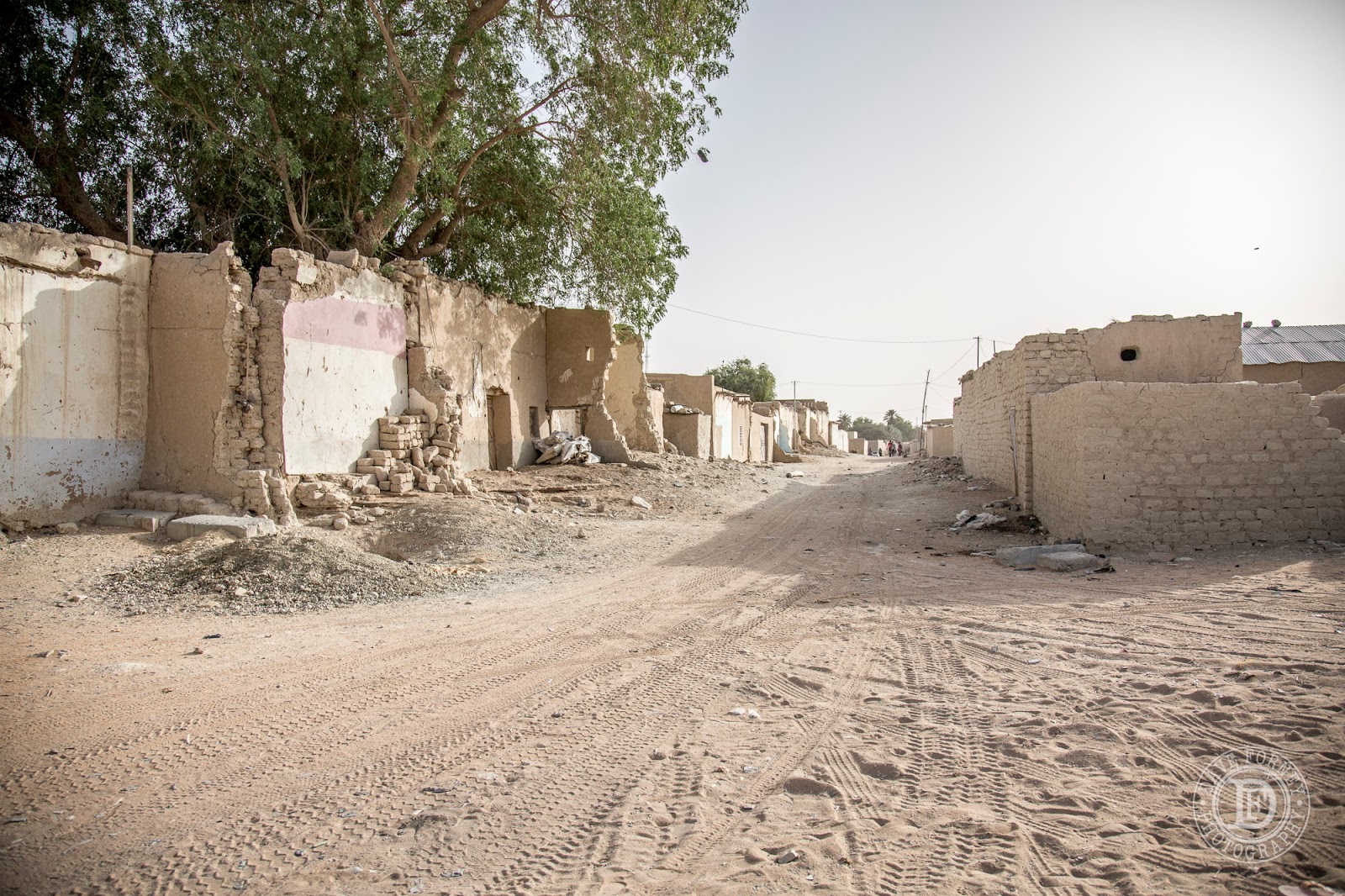 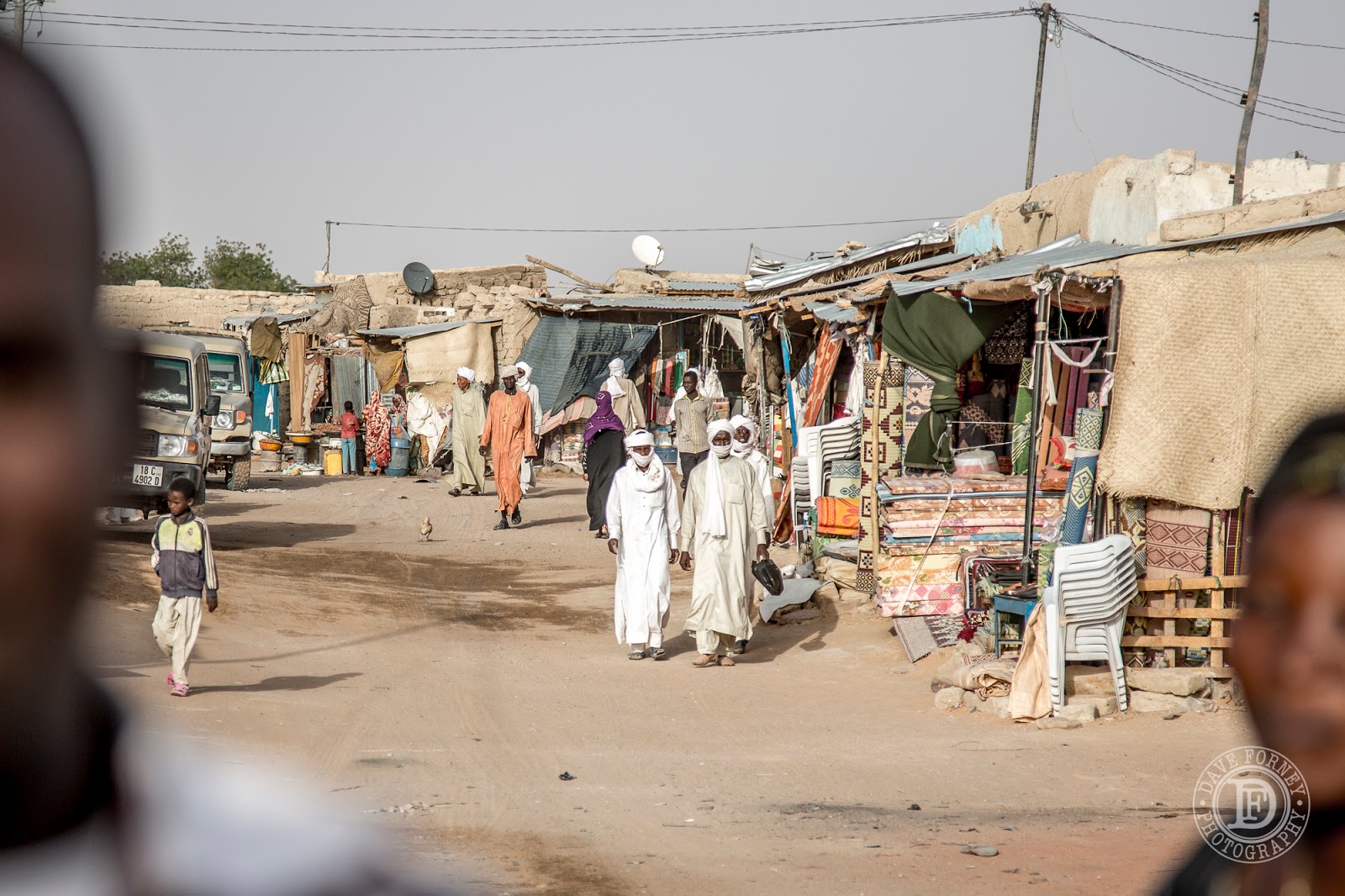 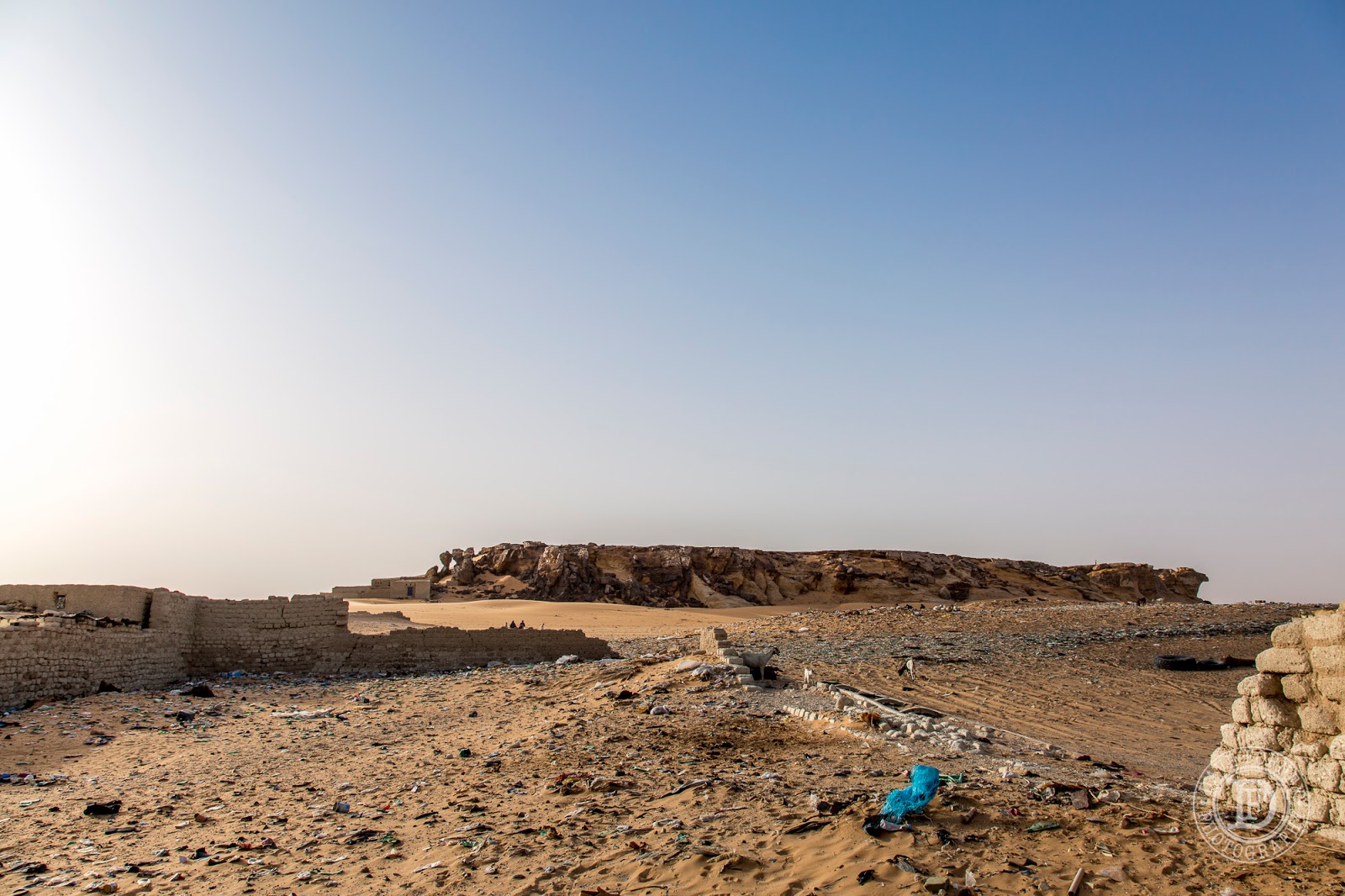 Next two shots: The Sheik and Pastors are welcomed after disembarking from the MAF plane in Faya. 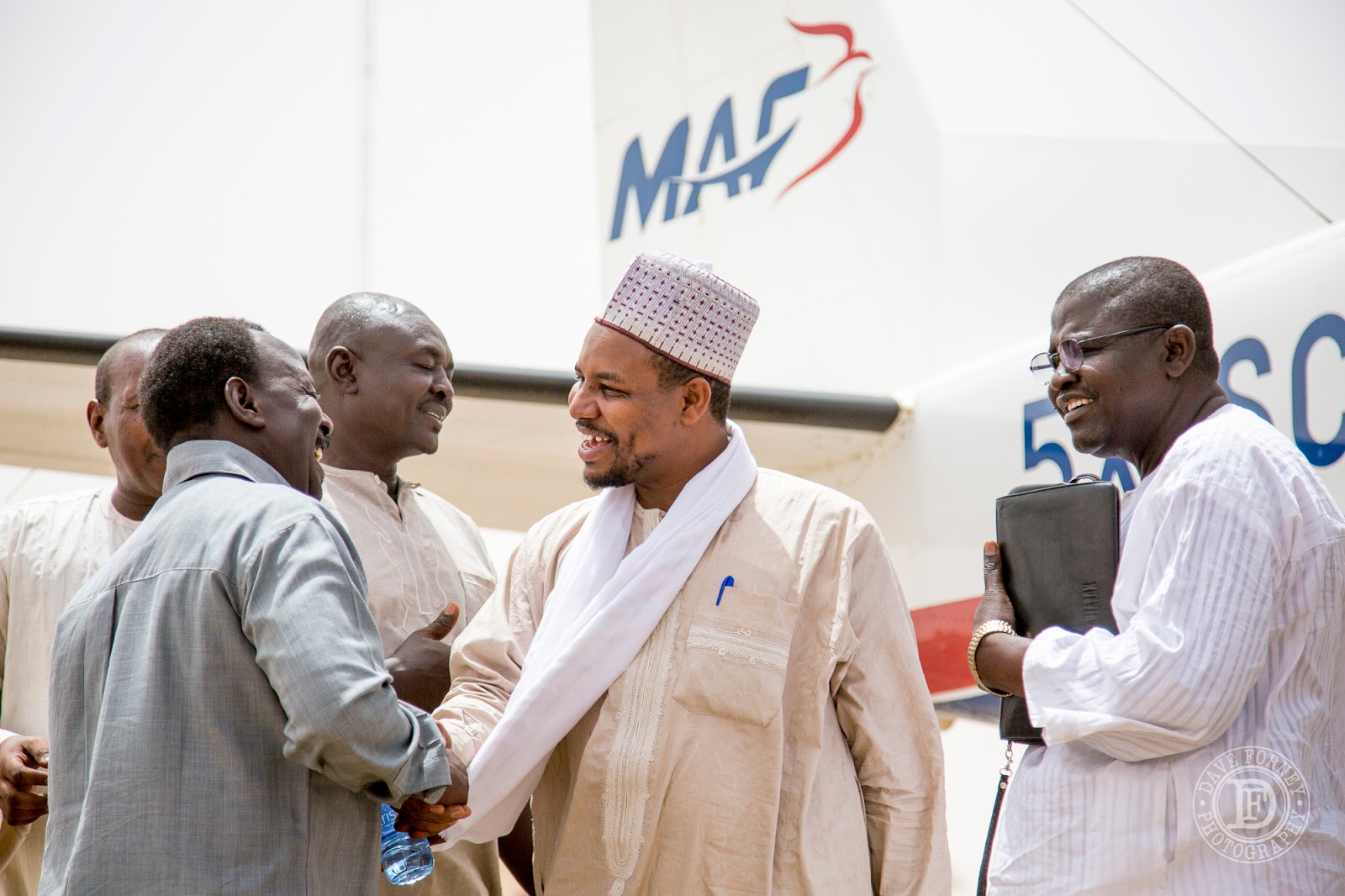 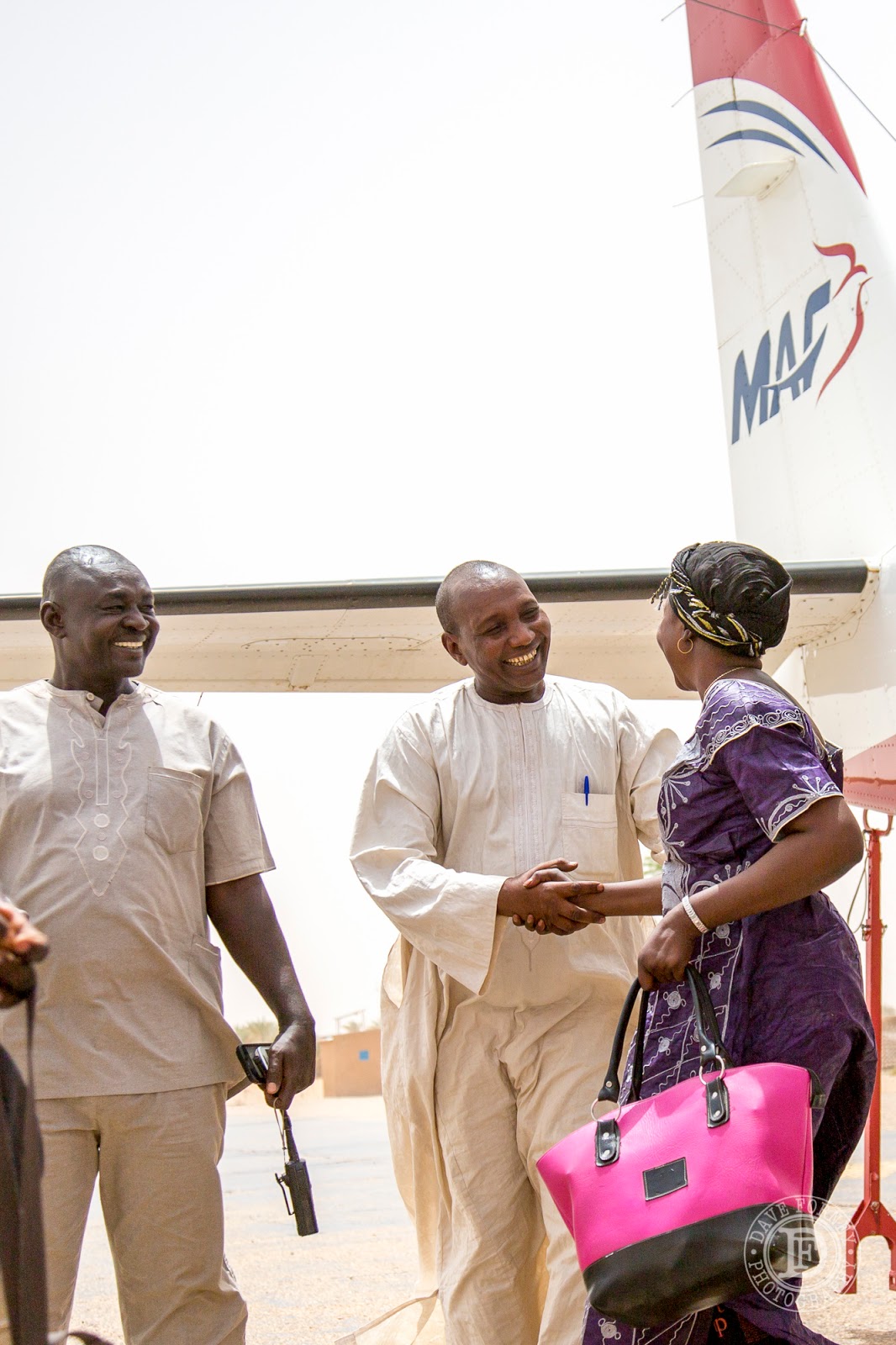 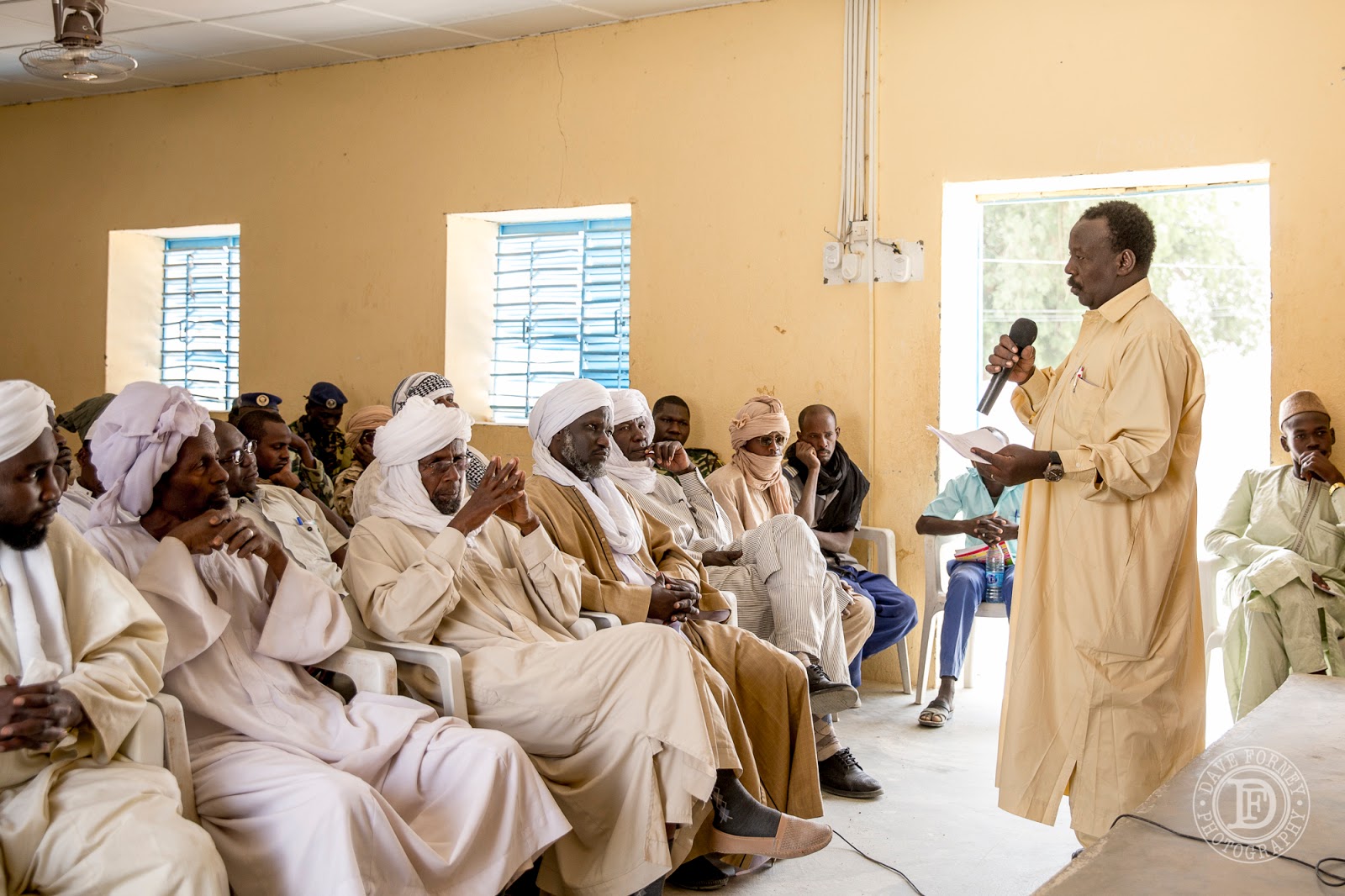 Tomorrow I'll be departing on a four-day flight to the Northern Sarah. After returning next weekend, its likely that there won't be any internet available, for several days or so, during the announcement of the results of the recent presidential elections in Chad. So it may be a few weeks before I can post another update. In the meantime, I appreciate your prayers for Joy and the kids back in Uganda, and for continued safety and wisdom in all of the MAF operations here, and around the world.
Posted by Dave at 12:40 PM 2 comments: