Two years ago, on October 17th, this happened... 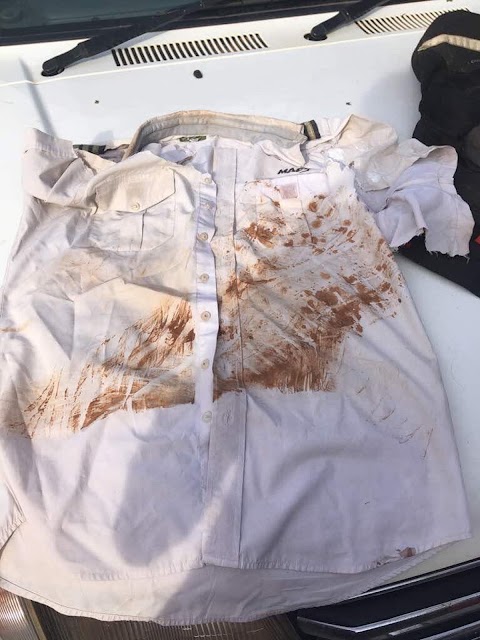 Long story short, I got knocked off my motorcycle by a drunk driver, and then a different vehicle, a large Toyota Landcruiser (SUV) promptly drove over me, right across my torso. I should have died right then and there, and many other times in the minutes and hours that followed. But for some reason, God chose to keep me around here on this earth a bit longer. Those were tough days on my family. Joy and the kids carried a HUGE burden in making many decisions related to my care, that could literally mean the difference between life and death. The family was split between the hospital, the home in Uganda, and eventually the U.S., after I was later flown back there for further care. Many of you chipped in to help us in so many different, practical, meaningful ways during that tough season, for which we will always be grateful! 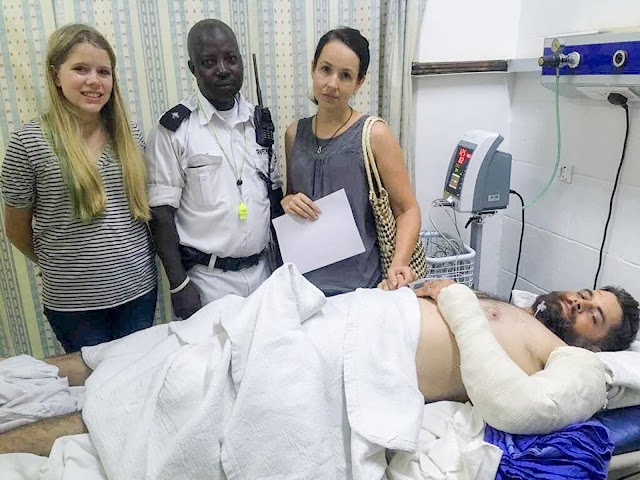 In some ways it seems so long ago, and in other ways it seems like it just happened. But yesterday was the two-year anniversary of "The Squishing". In addition to our strong faith in Jesus and his sovereignty in our lives, our family also has a bit of an odd sense of humor, something that really helped us through some of those tough days. So it's not too surprising that we came up with a bit of a weird, new family tradition last year (on the 1-year anniversary of "The Squishing") to commemorate the event. Rib day!
Along with many, many other broken bones and serious injuries, basically all of my ribs were broken, either in the front, or back, or both. Therefore, we thought, what better way to remember and commemorate the event, and God's miracles, than to enjoy some racks of ribs every year on the anniversary? And thus a new family tradition was born. Rib day! :-)
Right now, for a variety of reasons, our family is actually scattered all over the world again. Hudson and I are here alone in Uganda, so we had our own small rib party. (By the way, I noticed later, after I took the selfie, that I was actually wearing a shirt that my sister had given to me, which says "Unbroken Bones are Overrated". I didn't plan to wear it for this on purpose--but it's a comfy, old t-shirt that I often wear around the house--and pretty good coincidence to be wearing that specific shirt on Rib Day evening, don't you think?" 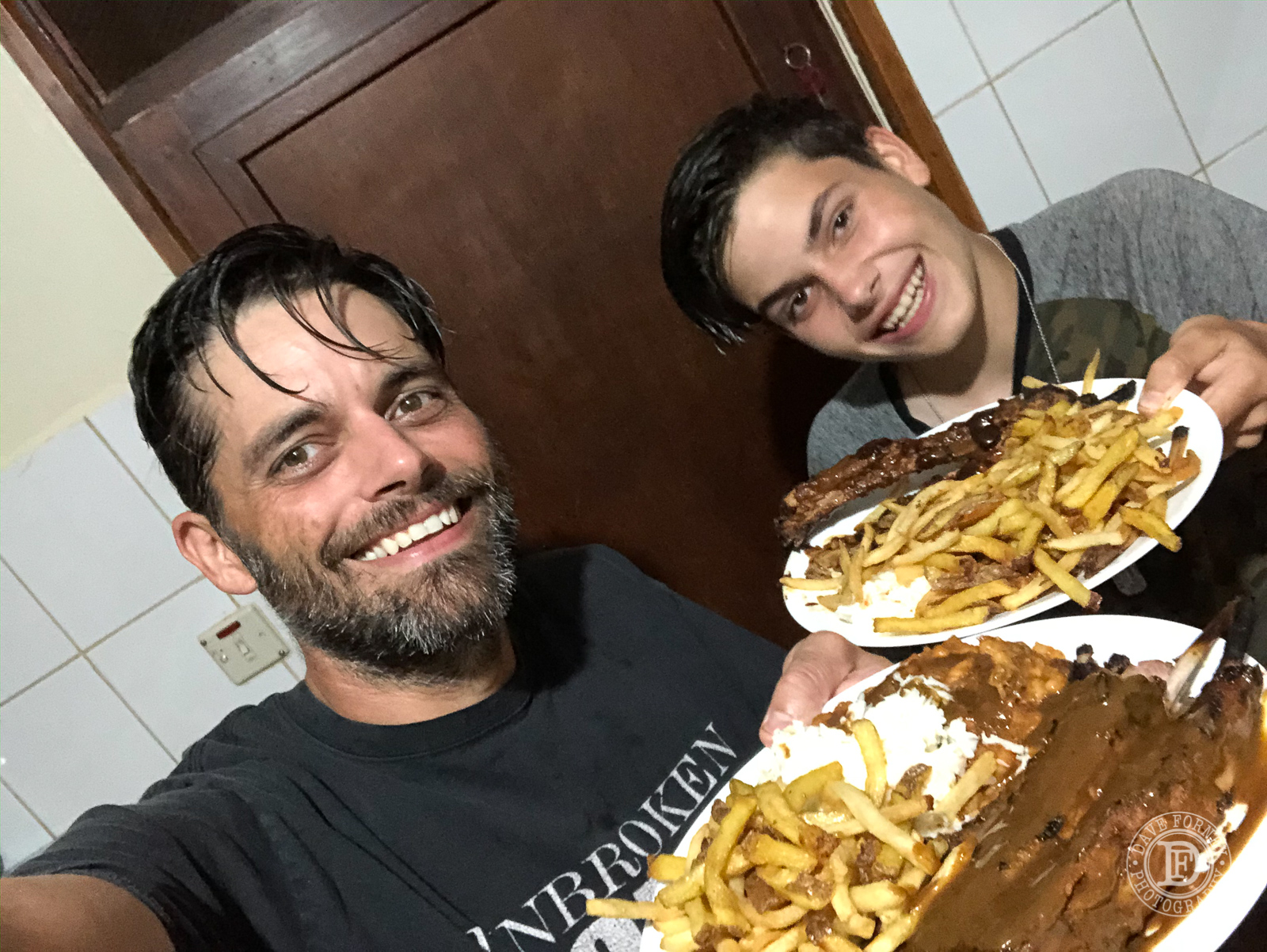 Joy and the younger kids are in Oregon, USA, right now, where Joy is getting some much-needed medical attention and also taking care of some adoption stuff for our daughter, Sanyu. So they got together with the grandparents and cousins there for a big rib party! Thanks guys!!! Wish we could have been there too, but so fun to see you all enjoying some ribs together. :-) 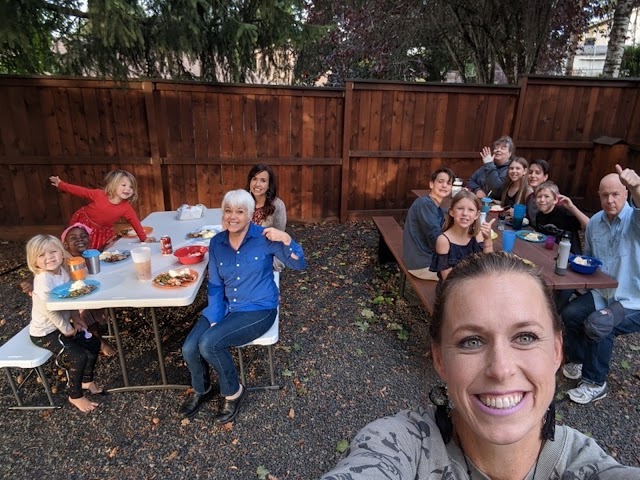 I noticed that in the nice picture they sent me,  below, that they had a green vegetable, green beans. That did make me feel a bit guilty. I need to start feeding me and Hudson some more healthy veggies. We did have coleslaw with our ribs, baked beans, and fries. Does coleslaw count? 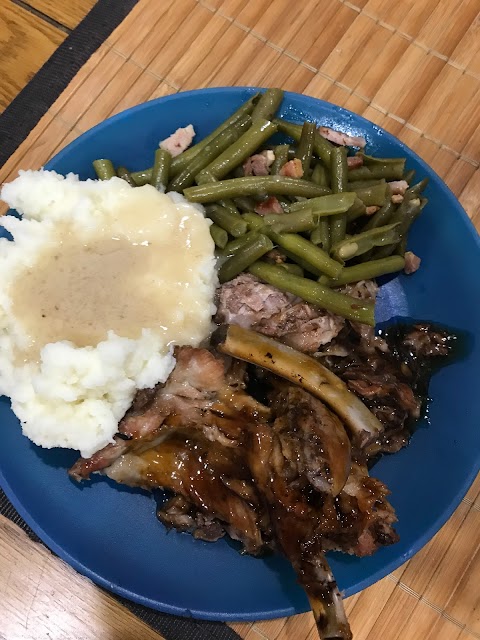 Meanwhile, Britton was chowing down on ribs over on the East Coast of the USA. 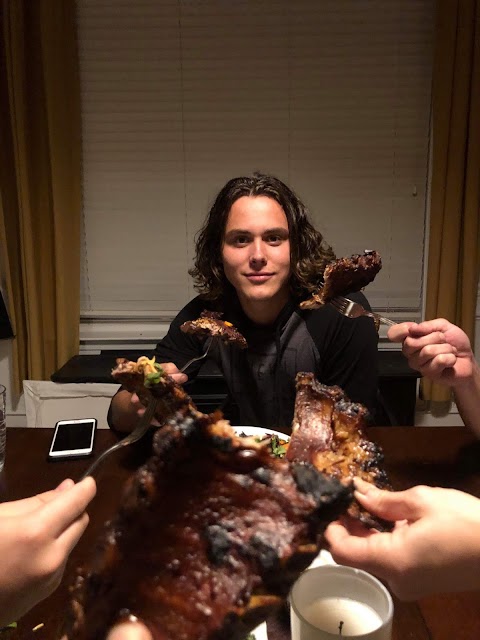 He happened to be hangin' with his really good friends, the Morris's, who are a blast, and so kind and generous, and apparently whipped up some really awesome ribs for the occasion. Thanks guys!!!
Hannah is at University right now, so she is stuck with whatever they fed her there. But next time we get together with her we'll have to try to make it up to her. :-) 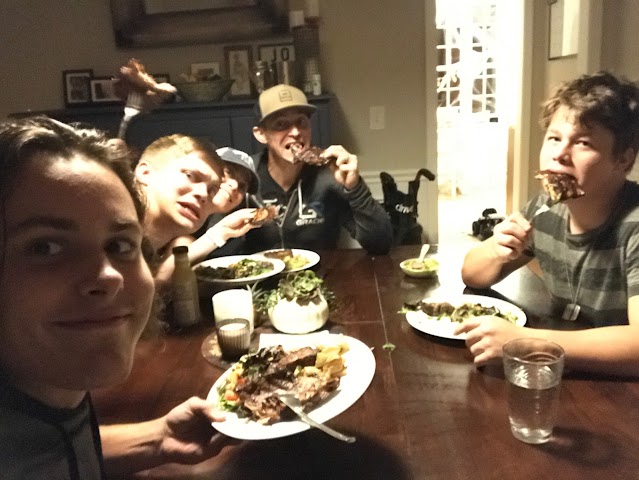 Meanwhile, this past week was Hudson's 'fall break' (even though there is no autumn season here) from school, in Uganda. So he and I enjoyed a few excursions out of the city, to get some much-needed soak-up time in Nature. One thing we did was a birding cruise in a small boat through a swamp on the edge of Lake Victoria. It was so much fun. We saw a ton of different birds, including several of the elusive, and very strange looking Shoebills, which are currently listed as vulnerable, and declining, on the IUCN Red List. Maybe when I get a chance to look through my photos I can share some of them here on the blog. 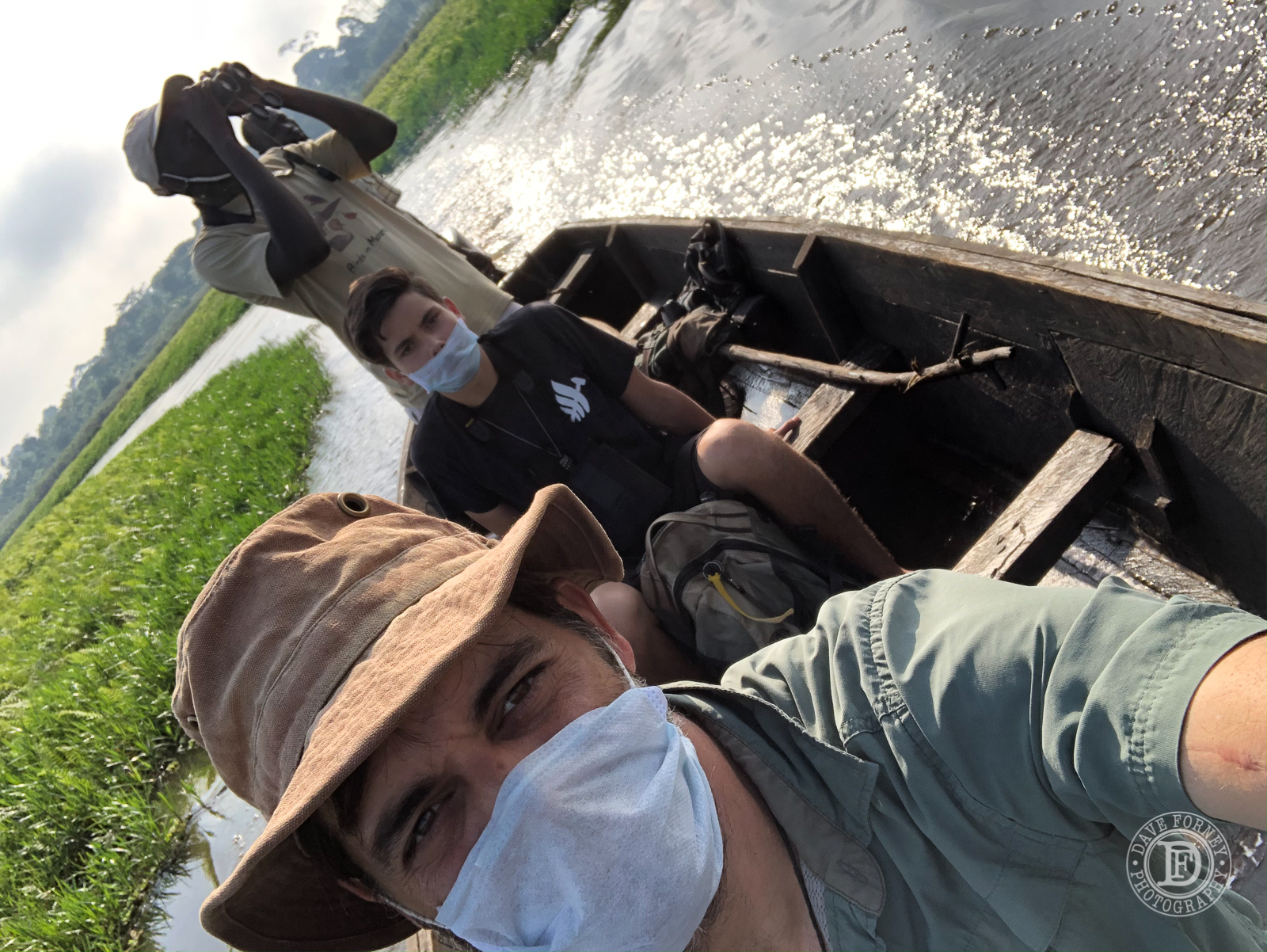 We also did a few days of camping up in the remote Kidepo Valley National Park. The weather was insane--tons of rain and horrible roads--but that is a story for another day. Most of the park was cutoff from vehicle travel due to flooding and/or overgrown nature that has been claiming back the park in the many months that Uganda has been 'locked down' due to C-19, without any foreign tourists. It is just starting to reopen, so hopefully things will improve in that regard. However, we definitely had the campsite all to ourselves--well, at least as far as people go. It didn't look like anyone had camped there in a long, long time, and the animals seemed to be very comfortable just sort of meandering through our camp at any time of the day or night. All kinds of animals... 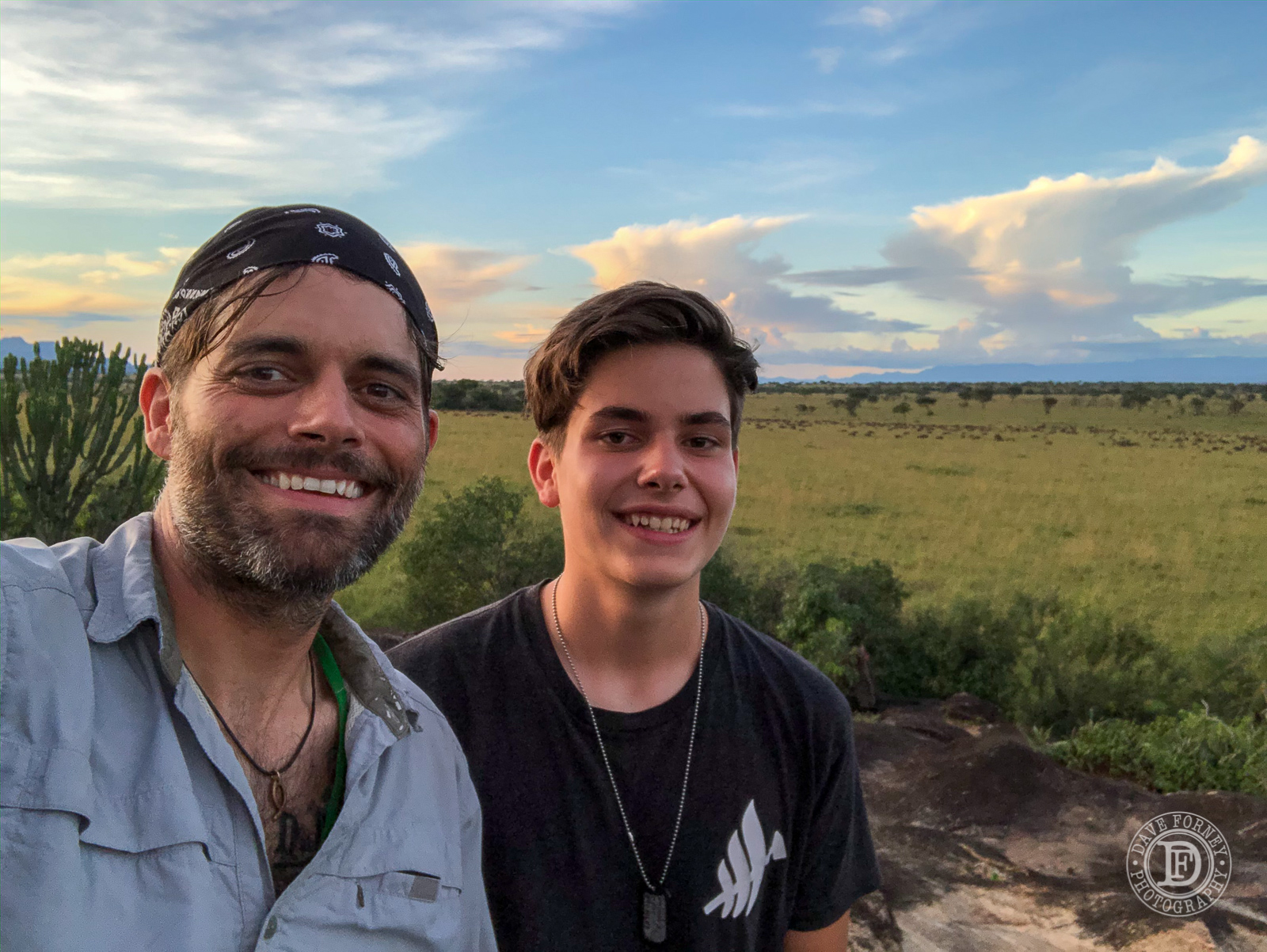 ... including many buffalo and yes, even a pride of hunting lions. But that's a story for another day as well. All I'll say for now is that it definitely gets your blood pressure going when you're sitting in the dark by the campfire, just you and your son, (at least you think it's just the two of you) and then you hear a strange noise and looking around with the spotlight you realize that there are dozens of buffalo all around your camp--in between you and the vehicle, less than 15 feet away, staring at you. But that was only the start of an exciting evening. Shortly thereafter we heard the loudest lion growl/grunt, and the closest, that we have ever heard. And within seconds they started to appear inside our camp, including a huge, maned male who walked right in like he owned the place, and was really not happy with us, or afraid in any way. There's a lot more to the story, but that's for another day. I'll just show you a picture, below, of us just after we transitioned from our hammocks that we were planning to sleep in (and had slept in the night before) to our new sleeping quarters inside our vehicle. And yes, the lions continued to roam around and through our camp, making lots of noises throughout the rest of the night. :-) 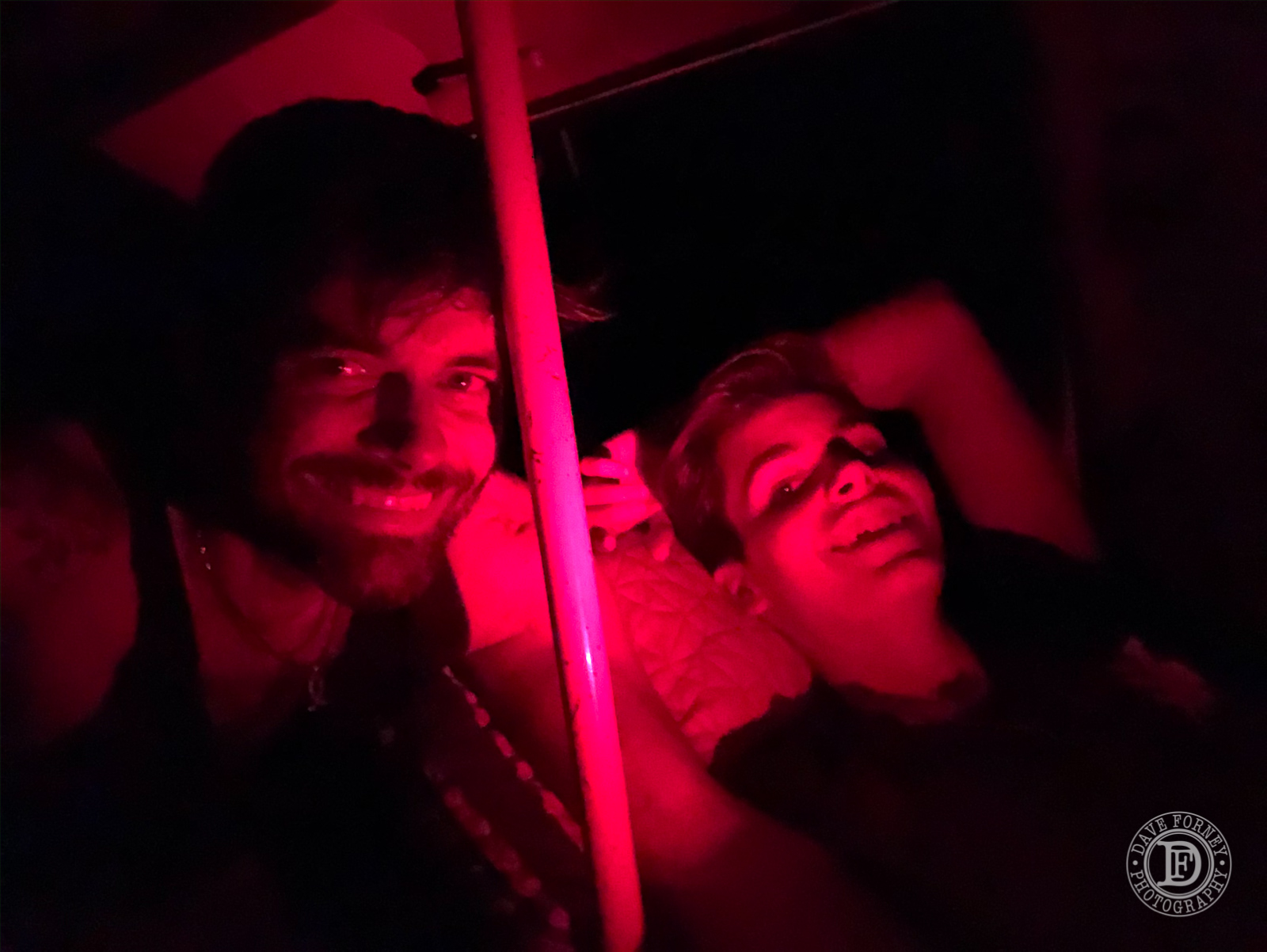 We discussed the option of leaving early the next day, and abandoning our last day in the park, but decided to stay, despite (or maybe because of) all of the lovely wild creatures that were sharing our camp with us. However, we were a lot more cautious the rest of the time there. ;-) 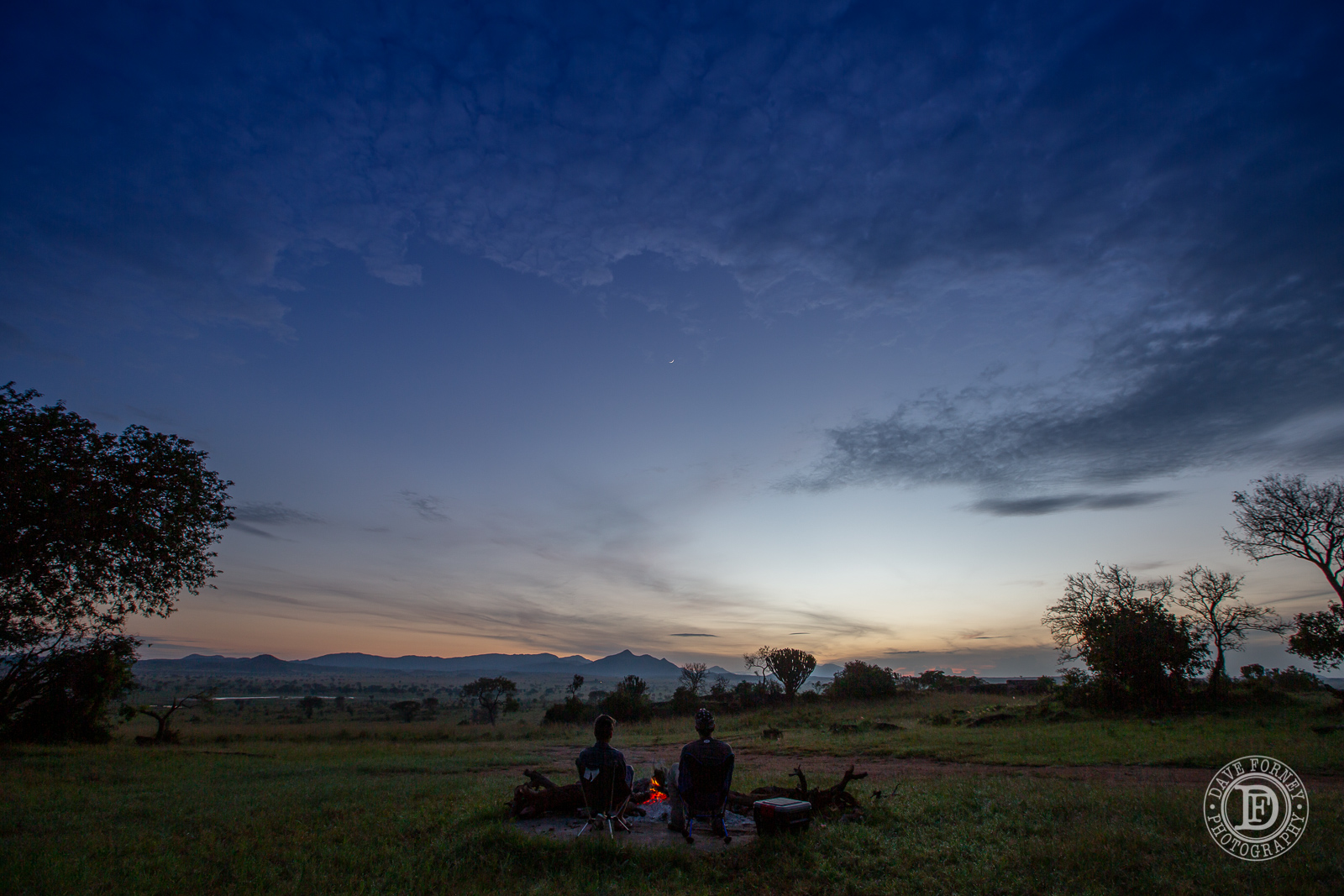 Here's a parting shot of us standing on the 'lion rocks' late one afternoon. Just behind us, down in the grasses, you can see a bunch of black spots, which are buffalo. In the background, the blue mountain is in South Sudan. 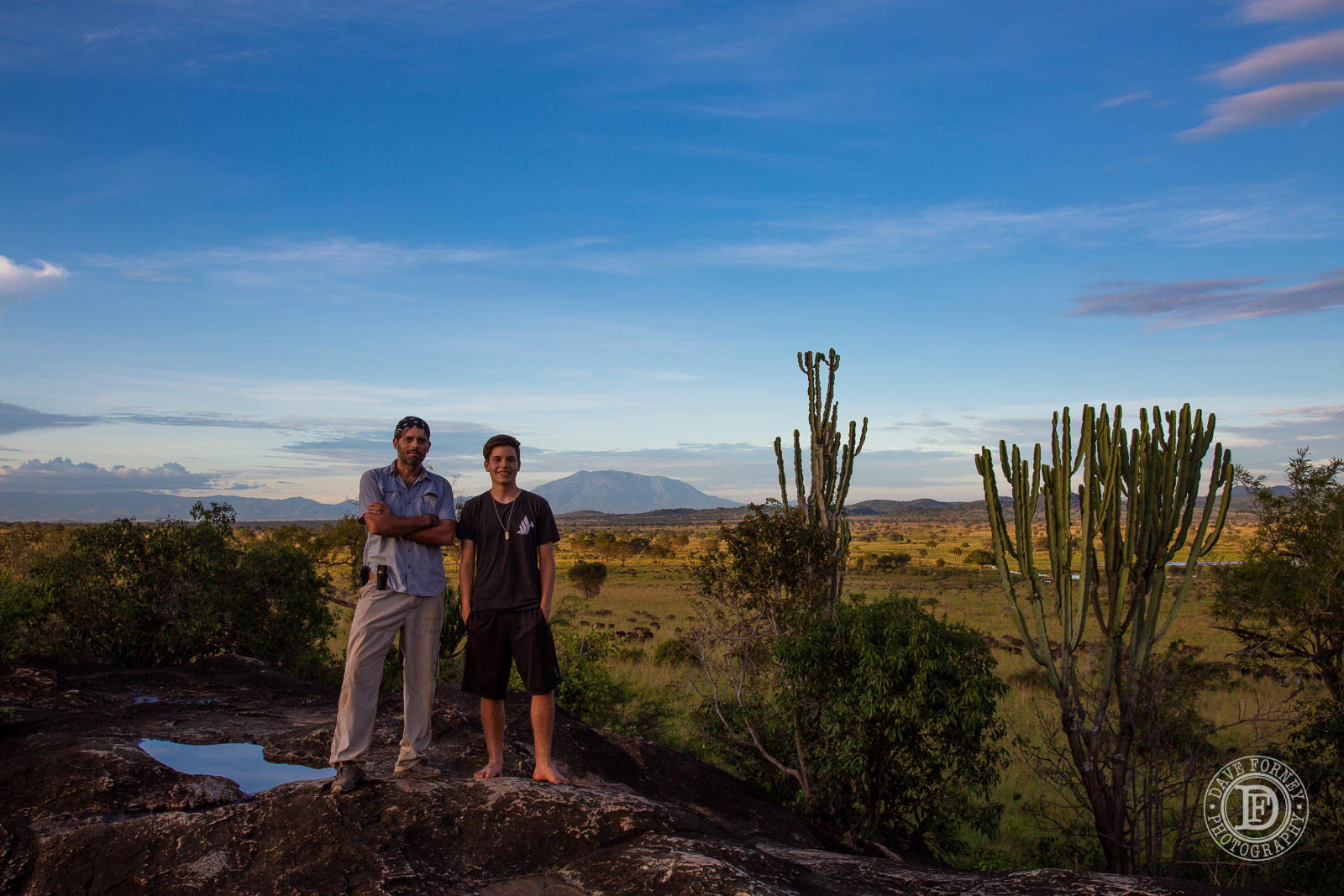 Some day maybe I'll show you some of the photos of the flooding, muddy, horrible roads, and some of the amazing animals we saw up close and personal during our little camping trip. Good memories!
Posted by Dave at 9:59 AM No comments: