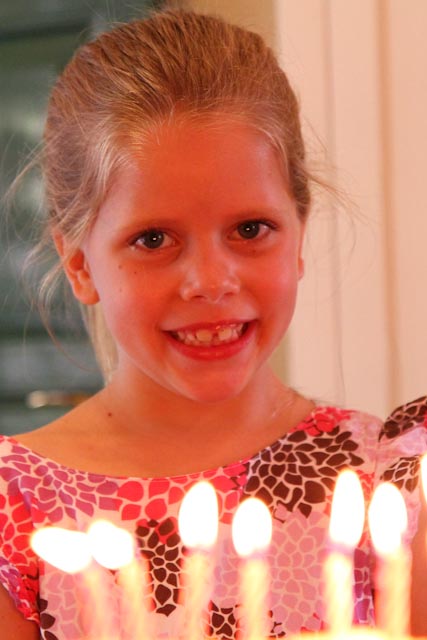 On June 21st Hannah turned eight!  As is our family tradition, the birthday person gets to pick each meal for the whole day.  Hannah chose to have sticky buns for breakfast, egg and cheese sandwiches for lunch, and pizza for dinner.  Yumm!  We had a little family birthday party for her that evening and she got to open presents from her grandparents in the U.S. 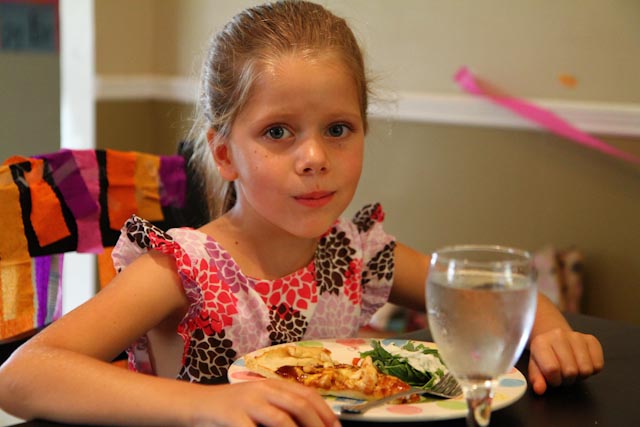 The next day Joy had a very fancy tea party for all of the MAF girls here, in honor of Hannah's birthday.  They had a lot of fun! 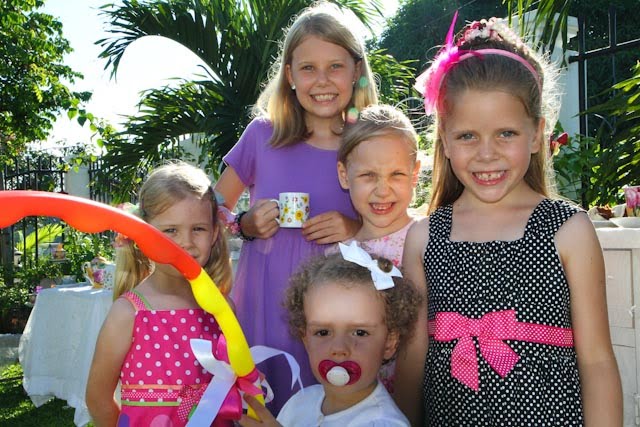 Britton and his friend Carter have been trying to catch a certain Bronzeback snake for quite a while.  It lives around our back yards.   These snakes are super fast and can climb straight up walls and virtually "fly" through the bushes.  But they're not poisonous.  This week Carter finally caught the one they were after.  Since he already has a bunch of animals and no room for it, he gave it to Britton.   They both go berserk about animals, so as long as one of them can "house" the newest critter, they're happy.   Britton kept it for a few days before they caught another, smaller Bronzeback.  He then released the big one, and is keeping the smaller one in the same large cage that houses his Reticulated Python.  The small one is much more ill-tempered.  It bit and then chewed his hand in the fleshy area by his thumb.  It was pretty nasty looking, but of course, Britton takes all the blame for it, saying that he must have made the snake feel "uncomfortable."  And speaking of uncomfortable, I think it's Joy who feels the most discomfort and  deserves a hero's medal.  She despises snakes, but lets her boys be boys, which says a lot!  Incidentally, we also have three turtles that eat live fish and various fruit and vegetables and two rabbits.  We're getting quite a zoo here! 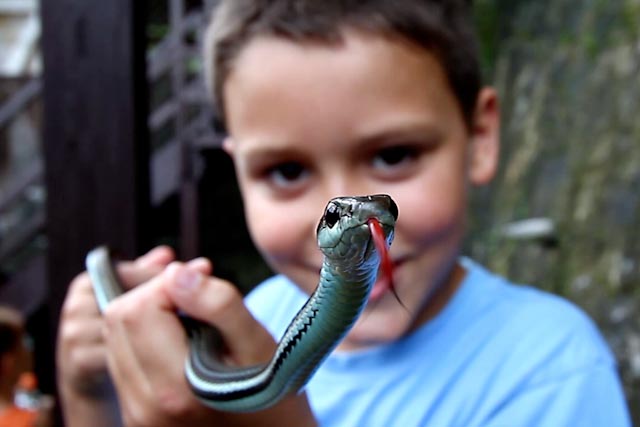 For the past month or so I've been spending much of my flight time working with our newest MAF pilot here in Tarakan, to get him ready to fly solo in this area.  It's been a lot of fun!  On Friday he got his Indonesian pilot's license and was able to make his first solo flights into the remote areas of Northeast Kalimantan.  Way to go Tripp! 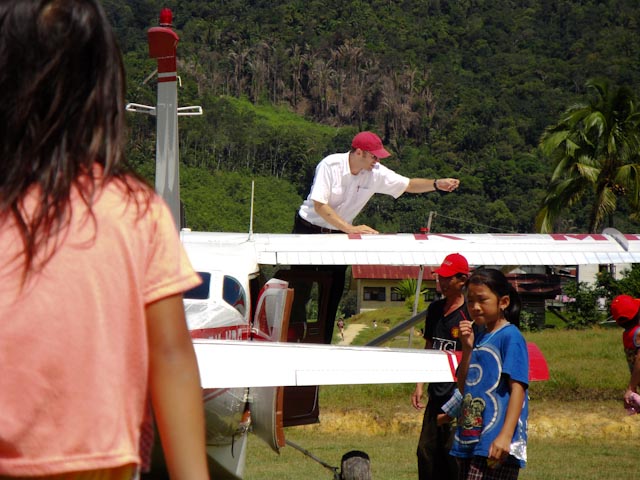 Here's a few shots of the kids from PaUpan and Binuang. 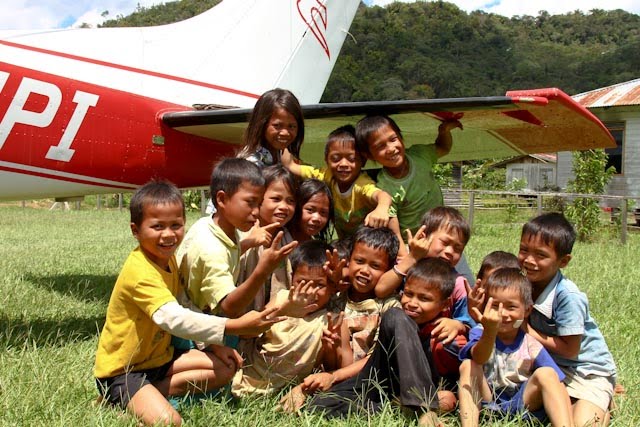 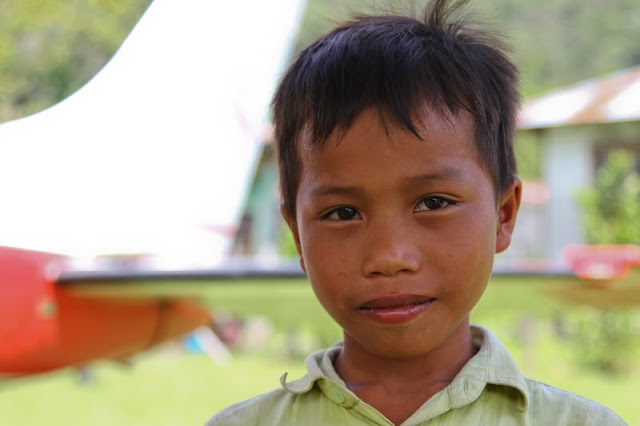 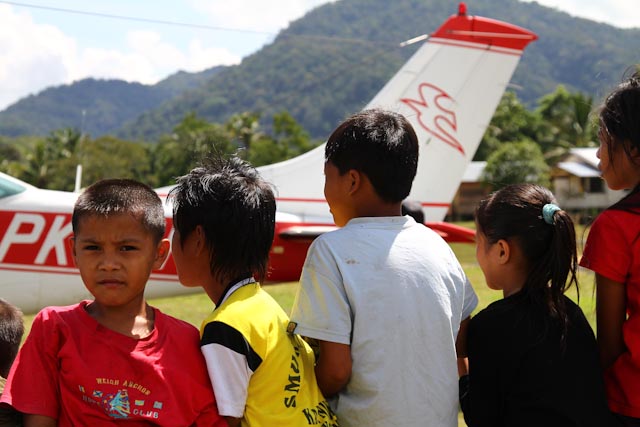 And a few shots from "my office window"... 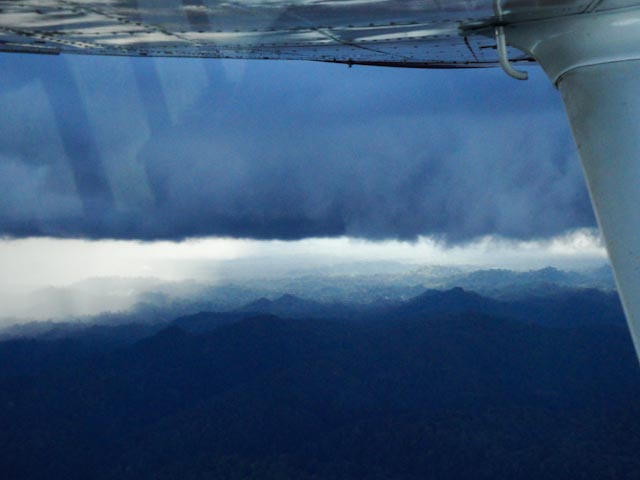 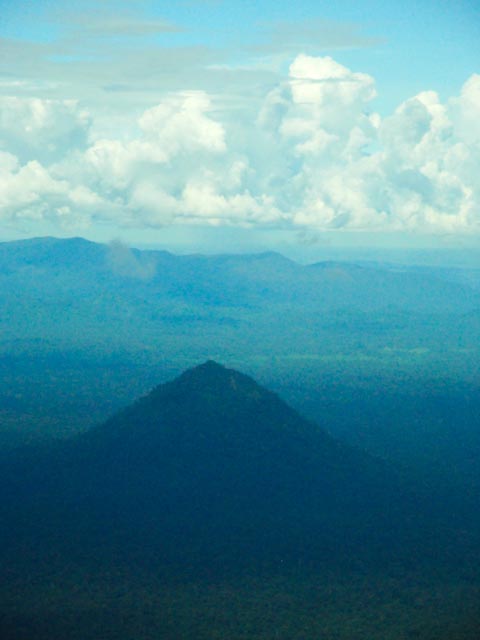 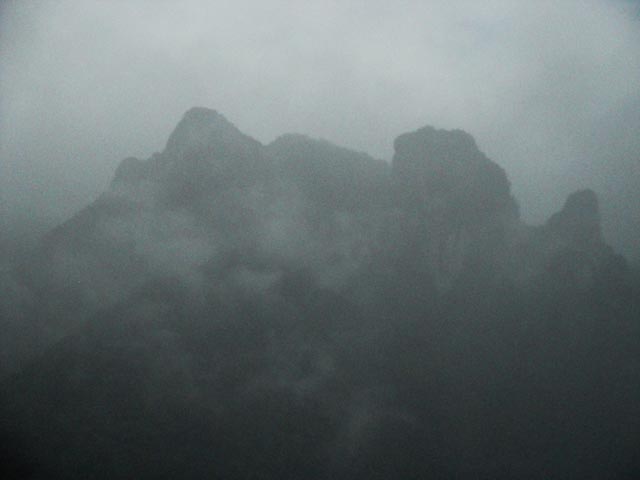 Well, I have to go get some sleep.  Gotta watch some World Cup games tonight.  Overall, I have just two words: VIVA BRASIL !!!
Posted by Dave at 11:36 AM 5 comments:

Email ThisBlogThis!Share to TwitterShare to FacebookShare to Pinterest
Labels: Day in the Mission Pilot's Life, Family Life, Our Kids, View From My Office Window

Today it finally poured for a while. Believe it or not we've run out of water (we have an underground water tank that collects rain water from the roof) about five times in the past few weeks. It needs to rain good and hard at least every couple of days, with a few lighter rains in between for us to keep enough water in our tank. When it does run dry, we can order a truck load of water for about $10. But it sure is nice to not have to pay for water here in the tropics! :) 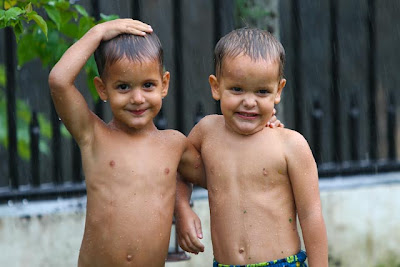 Tanner (left), and Tyler (right), love playing in the rain! 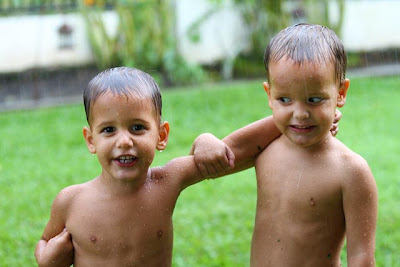 Last night all of the MAF folks came over to our house for a pizza social. Everyone brought enough pizza to feed their family, plus a little extra, and we enjoyed a feast of various pizzas, salad and dessert. Pizza is one thing we can't get locally, so the MAF women have perfected some good home-made recipes. We really have a great team here and enjoy hanging out with them. 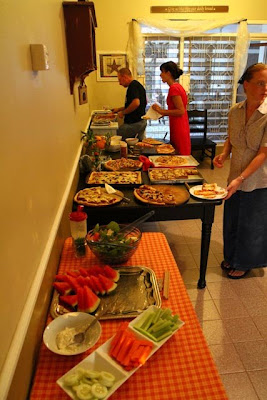 A few of the younger kids enjoying pizza and watermelon with their friends. 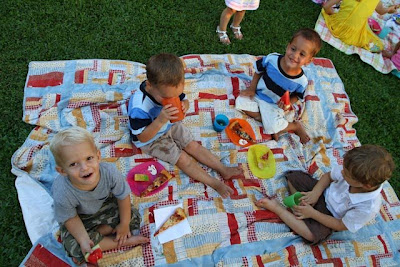 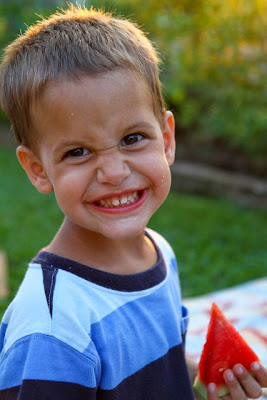 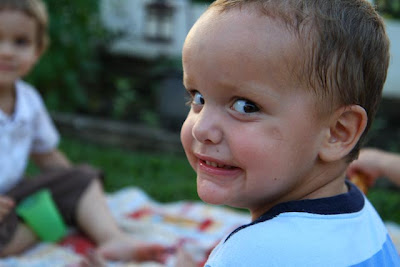 Here's a few shots from last weeks flights. It was a busy week flying many Indonesian church leaders back to their various villages after their annual meetings at a central village. 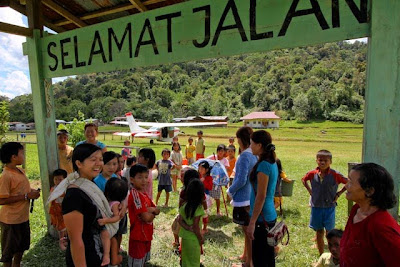 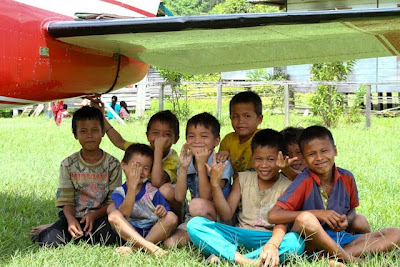 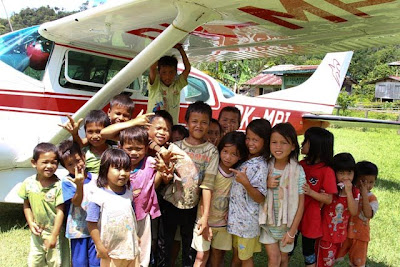 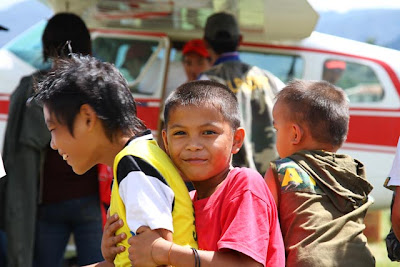 And a few critters too! This is a large (over five inches long) poisonous centipede. The guys caught it in the hangar and gave it to me to bring home for Britton. These things are SCARY! They have large "fangs" (they look like huge hooked claws) on the front of their face, just below the antennae. And they know how to use these weapons! Their bite is said to be much worse than a scorpion, and has been known to kill young children or elderly. Even with healthy adults, a good (or maybe I should say bad) bight can send a person into anaphylactic shock. Oh, and they're very fast! Actually, we found one at least this big just a few days ago in our house! It was in the dirty laundry that the kids were sorting into piles, right in our bedroom!!! And yesterday we found a baby one in the kids room. I hate these things as much as spiders! 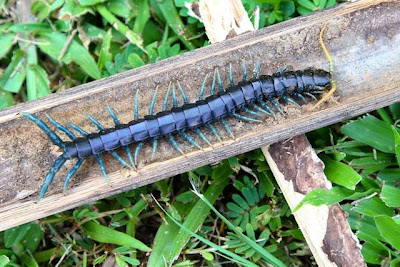 Speaking of spiders...Hudson is "THE MAN!" You wouldn't catch me, or even Britton doing this. But Hudson jumped at the chance. This is a smaller version of the one that is currently living in our back yard, that I showed you last week. 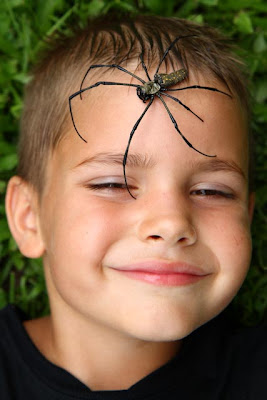 Before my mom jumps all over me, you should know that this one was dead--we think. It was being kept by our neighbors, the Colleges, until it died. So we thought it would be fun to pose for a few shots. But it was strangely limber for being dead. Don't dead insects usually get stiff and brittle? Britton was absolutely convinced that it was still alive and every few seconds would shout "it moved!", at which point the rest of us, excluding Hudson, would jump about a foot high. So there you have it. My kids are tougher than me. I do NOT like spiders or centipedes. I'd rather have snakes. But be careful what you ask for...it's been a while since we've seen a spitting cobra.
Posted by Dave at 9:29 AM 3 comments: