The View From My Office Window 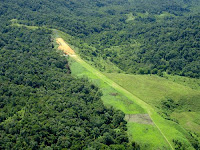 A few days ago I got a call from Data Dian (at left.) There was a very sick nine month old baby that needed to get to a hospital. I was a long way from Data Dian, in an entirely different area where we fly. But there were only two of us flying at the time (the other planes were down for maintenance,) and the other pilot wasn't checked out at the strips in that region yet. So within a few hours I was en-route to Tarakan, with the baby and his parents.

On the way there, I got a fantastic view of "Batu Mayoh," one of my 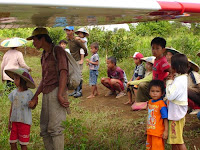 favorite landmarks in that region. Often it's hidden by clouds. But when the sky is clear, it's a real sight! Since I haven't gotten close enough to measure it, it's hard to say how many vertical feet the cliff is, but it's HUGE! I'd guess it's at least four or five hundred feet straight up, maybe a lot more! Keep in mind, these pictures were taken from a very safe distance. If you were closer, it would look far more imposing! The landscape all over that area sort of looks "Jurassic Parkish." There's tons of massive cliffs, huge waterfalls, and rugged terrain jutting out of the dense, jungle canopy all over the place. I never tire of seeing the beauty of God's creation here. 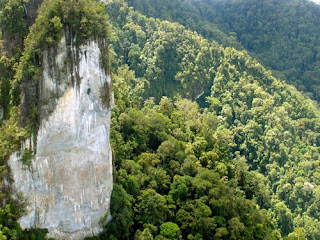 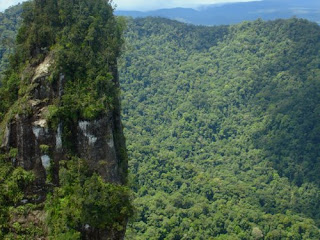 As I began to descend towards Tarakan, still 50 miles out, we got a great view of what we like to call, "volcanoe Moutain." Although Indonesia is home to hundreds of active volcanoes, this is not one of them. In fact, we have it straight from the mouth of a Canadian geologist, that it's not even a volcanoe at all. But from certain angles it just has a volcanoe sort of look to it, so that's what we call it. 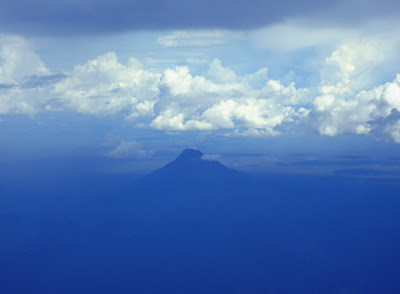 Anyway, these are just a few of the sights from my office window last week. And the good news is, the baby made it safely to the hospital, and hopefully within the next week or so I'll get the chance to fly he and his folks back home again.
Posted by Dave at 5:31 AM 1 comment:

Well, it's a bit late this year, but it's finally here--smoky season. We really only have two seasons in Borneo--wet, and dry. Dry season isn't really "dry," it's just less wet than rainy season. So whenever there's a small window of a few days when it hasn't rained, everyone goes nuts burning the newly cleared land for their "ladangs" (rice fields.)

Did you ever find it interesting how large flocks of birds all seem to know at exactly the same time that today is the day to fly south, or north, or whatever? Well, it's sort of like that here...with the people. It strikes me as amusing and a bit odd. There's no fires at all, day after day, then suddenly in the span of a few hours, seemingly the entire jungle is on fire. And it's not like one guy sees the other guys smoke and says, "Hey, that's a good idea. I think I'll light up my field too!" No, some of these ladangs are a very long walk from the villages...like a full day sometimes. So it seems more like just a peculiar, God-given jungle instinct, to know exactly the day and time to throw down the torches.

As a missionary pilot it looks like this: you're flying along over beautiful jungle, mid-morning. The skies are clear, the visibility is great No smoke. You stop for fuel and passengers in Malinau at 11:00. Then you head 150 miles south, deep into the Apokayan region of mountainous, interior Borneo. You drop off some passengers, pick up some new ones, and head back towards Malinau. As you leave the interior village, you suddenly notice little plumes of smokes curling up out of the jungle from all around the village area. "Uh oh," you think. Today must be the burn day. And you know that a hundred and fifty miles to the north, probably within a few minutes of the time these little plumes of smoke began to rise, there are hundreds and hundreds of much larger clouds of smoke bellowing out of the jungle.

And sure enough, by the time you get back to the Malinau area, there's a huge, thick cloud of smoke (see the picture below.) From a distance, it just looks like a vast, ugly area of smog, or very thick haze. But as you fly into it, the "sweet" aroma of burning leaves and vegetation reminds you that this is not your average haze. Visibility rapidly drops, and you occasionally become aware of the fact that you're holding your breath for long periods of time, only to breath deeply at the end, accomplishing nothing really. But perhaps this is just training for next years' "three cigarette smoking race." (See the post below to find out about that.) Think of the bragging rights I'd have if I was the first MAF pilot to win that one! That was a joke people.

Anyway, I took the picture below, just prior to entering the area of thick smoke. After being "absorbed" by the smoke, it wouldn't have done any good to take a picture. You wouldn't have seen anything. And besides, it would be silly to distract from the concentration of flying at that point, to snap a picture. But you can use your imagination, or go out and by a scratch-and-sniff forest fire sticker if you want to involve your other senses. :) 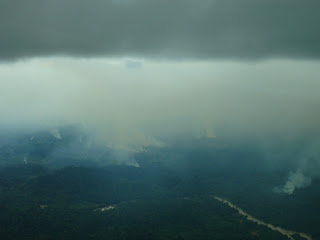 A few days ago, (August 17th,) was Indonesian Independance day. It's like our July 4th in America! Since it was a Sunday, everyone had Monday off for a holiday. There's always a bunch of fesitivities, community games, and get-togethers around.

Since the twins were fighting a nasty cold, I stayed home with them while Joy and the other three went to the pool in the morning. Ya, there's a pool here on the other side of town. It's nice, and usually not very crowded. Today was different. Lots of people were there because of the holiday.

As you might expect, there were games and races of all kinds going on at the pool...you know, swimming type races and games. However, I was shocked when Joy told me about the last race that took place. After all the guys had finished the swimming races, they got out of the pool and had the "who can smoke three cigarettes first" race. Seriously! She said they all jammed three cigarettes in their mouth at once, and then huffed and puffed as fast as they could, while the women and kids cheared them on! Smoking is very, very common here...but come on, a smoking race?! You've gotta laugh. I only wish she'd taken a picture. :)
Posted by Dave at 4:29 PM No comments:

The most recent overnight village trip I took part in was to the village of Long Alango. I went along with the Holstens, our good friends and MAF neighbors. The people of Alango were SOOOOO kind and generous! It was a humbling experience. We went there in the hopes of encouraging and ministering to them. I’m not sure if we succeeded, but I know they were sure an encouragement to us!

The Holstens led various games, songs, and activities for the kids. There were tons of kids and they had a blast during the outdoor Sunday School!! In the evening we had a church service. People came from all the small surrounding villages. David Holsten shared about the ministry of MAF, and then I introduced and showed the “End of the Spear” movie. It’s a lot of work to bring all the equipment into a village to show a film, but it’s always worth it. The people were again captivated and deeply moved by the film. And like usual, we had lot’s of time to hang around and visit with folks.

Pastor Yahyah and his wife (at right) were extremely generous hosts.

They’ve been ministering here in Alango for many years, and have a special relationship with MAF. We really appreciate Indonesian pastors and their families, for the sacrifices they make to minister to the people in these interior villages. On Saturday, we were able to take a little excursion

to a WWF (World Wildlife Fund) research station that’s not far from Alango, but situated deep in beautiful, untouched, primitive rainforest! (Picture below.) It was a great little boat ride and hike. Someday I’d like to return and spend the night with my boy(s).

Well, this is a little late, but I thought I’d throw in a few pictures from one of the ministry trips 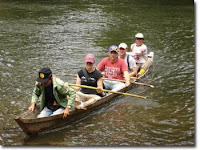 I did last month. In July we had a group of four LeTourneau University students, who are enrolled in the Mission Aviation program, come over here for a vision trip. They spent a week here in Tarakan helping out with various projects around the hangar. They each got the opportunity to ride along with a pilot during a normal operational day. Near the end of their time here, Paul College, my friend and fellow MAF pilot, and I took them interior for three days and two nights. Here's a few of them, along with Paul, and two men from the village, all piled in one canoe!

It was a good chance for them to get into the jungle a bit, experience more of the “interior” culture, food, sights, smells, and the favorite…cold, cold showers from either a bucket or the river. I also brought along all my video equipment, and we had church services each evening that lasted for hours!

The people have never had the chance to see films on a screen like that, and they were awed by the experience. It was a great ministry opportunity as well, since I had the chance to share my testimony before the films, and then we had hours to visit with the people about what they’d seen afterwards.
It was a fun couple of days in the villages, and I was glad to have the privilege of bringing along these new, future missionary pilots. Who knows, maybe one day they’ll be serving right here in Tarakan with MAF?? 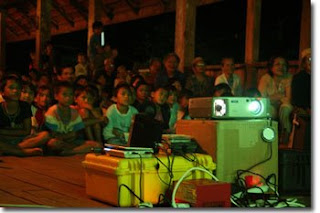 Picnic at the Pillbox 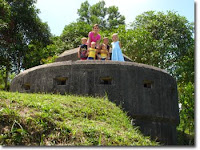 couple days ago when I was doing an inspection on my airplane, the whole family came down to the “pillbox” for a picnic lunch. The pillbox is what we call the WWII bunker that sits right on top of the little hill above our hanger. If you look closely you can see hundreds of divets from rounds that were shot at the bunker by Allied forces.
History buffs would really like it here. There’s quite a few 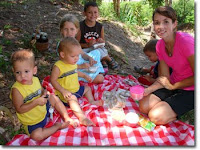 bunkers around the island, and vegetable farmers often dig up old shells and shrapnel. In case you’re interested, the Japanese controlled Tarakan for several years, (actually they controlled much of Borneo,) until the Allied forces fought bloody battles to regain control just before the end of the war. Many Australians, and some Americans died right here in 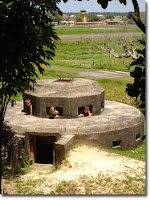 Tarakan, as well as other strategic port areas along the coast.
In the picture on the left, you can see the control tower in the background. The bunker closely overlooks the runway, which dates back to the war. That's one of the reasons it was defended and fought for so intensely.