This is our city. This is where we live. This is Kampala, Uganda. 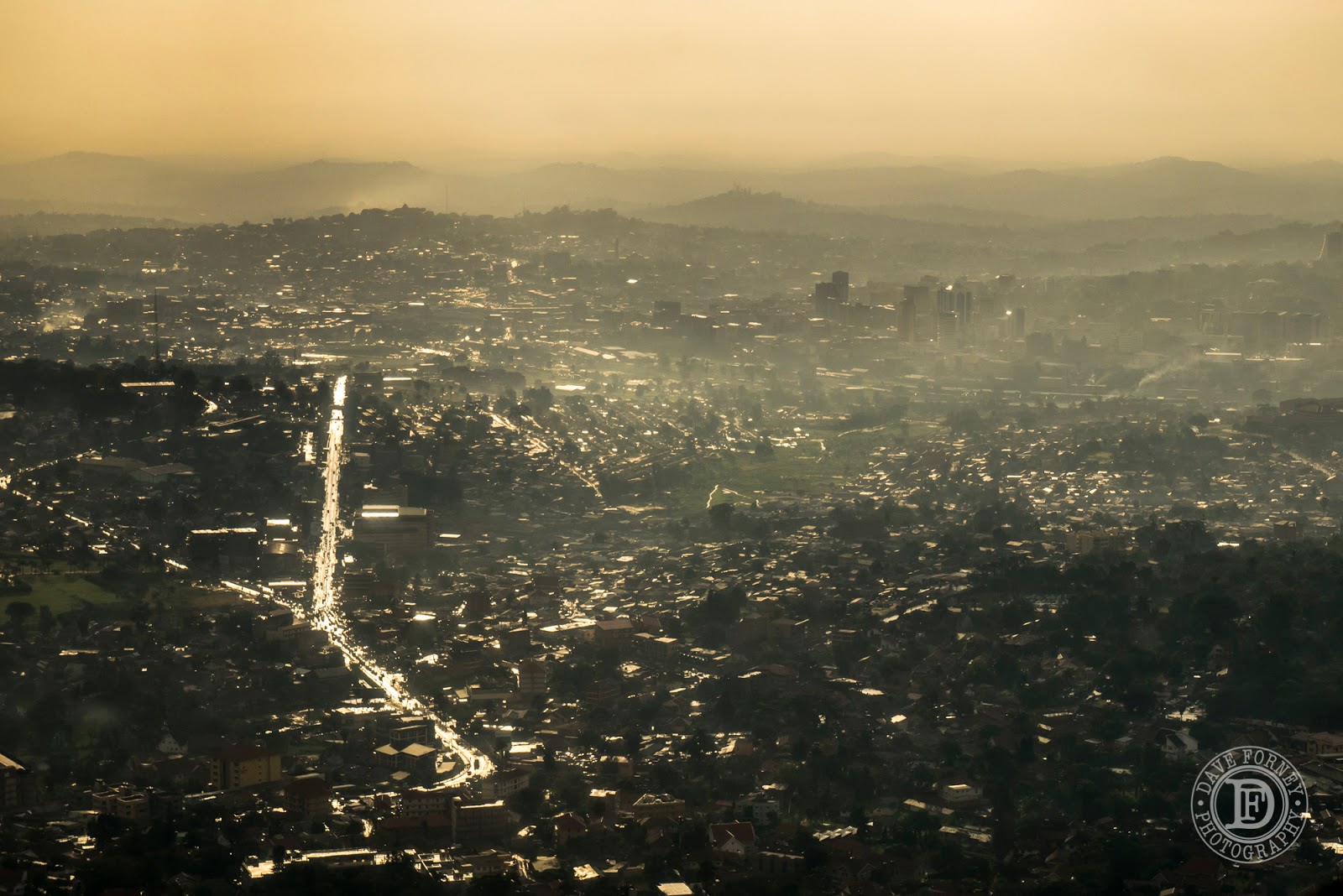 Here's a view from our bedroom window as the sun rises after an evening rain. This is usually accompanied by the beautiful music of a wide variety of song birds, and the occasional chatter of monkeys, or the annoying screech of an ibis. 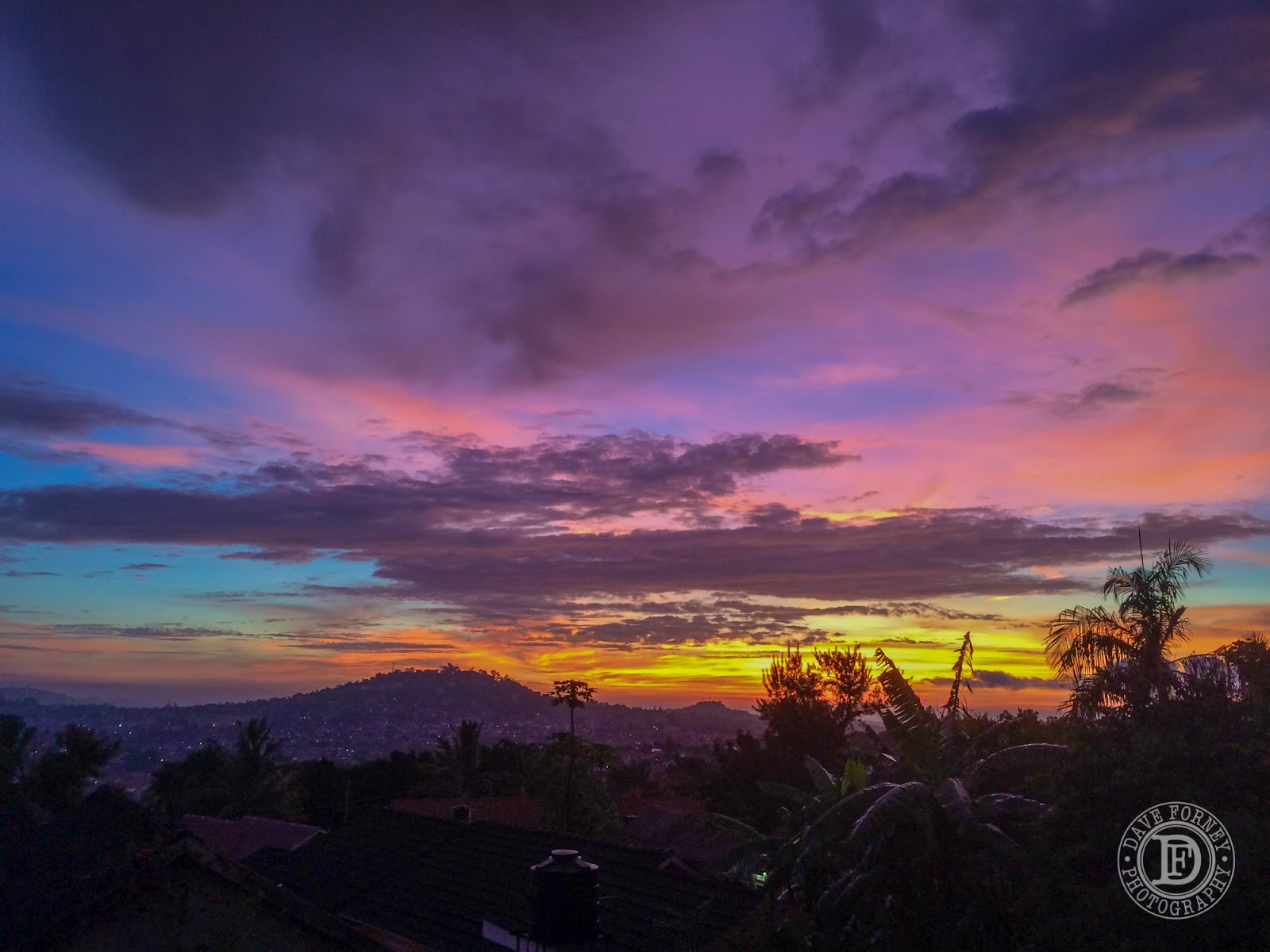 Here's another shot of a sunrise from our window, this time through some morning haze. 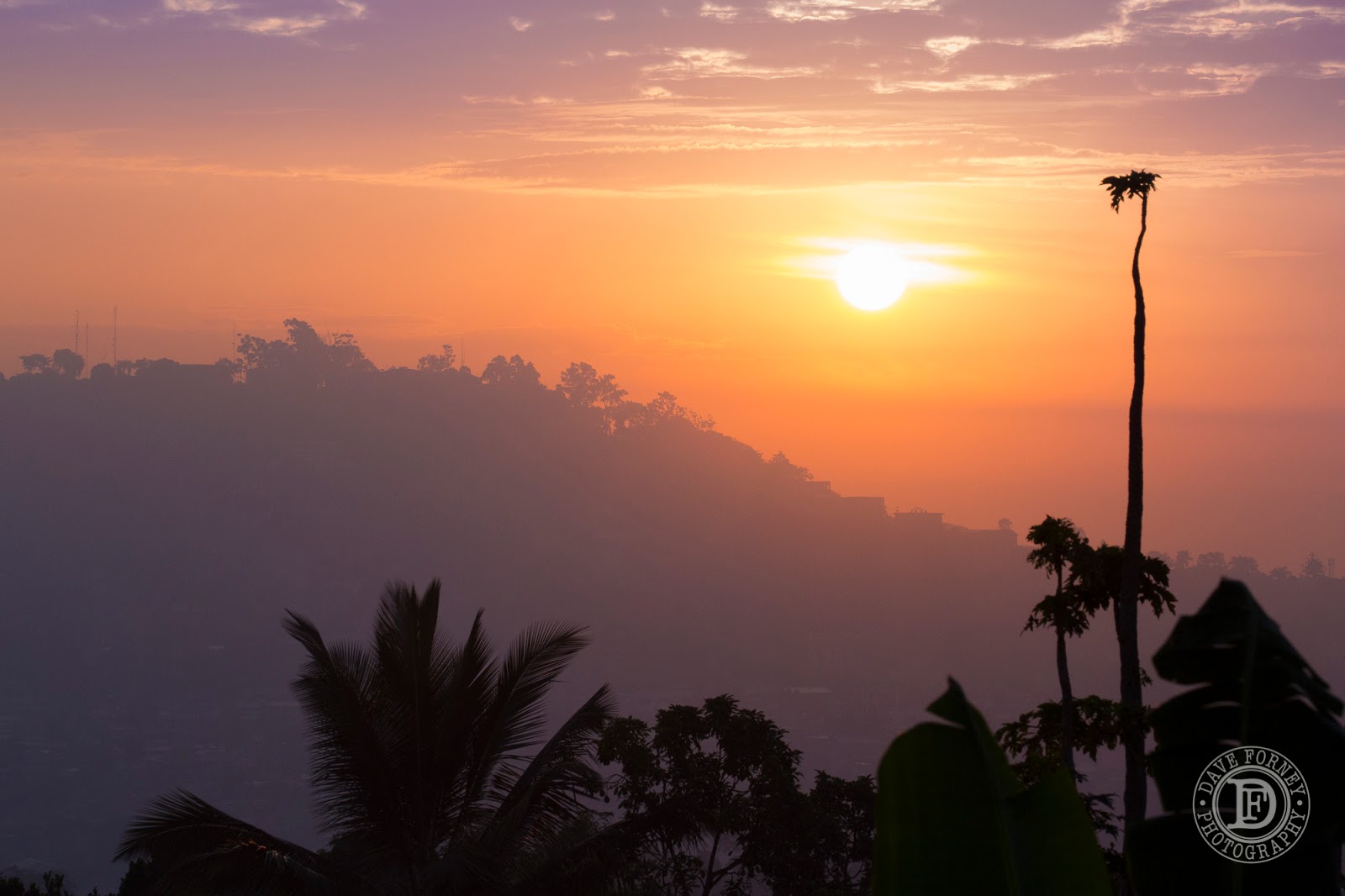 Kampala is located right on the northern edge of Lake Victoria, the second largest freshwater lake in the world (by surface area.) Lake Victoria is the largest and main source of water for the Nile. Like the great lakes in the U.S., it is certainly large enough to influence the weather, and even to generate it's own weather during certain times of the year. At an elevation of nearly 4,000 feet, and receiving fairly predicable rains, Kampala tends to enjoy moderate temperatures throughout most of the year. During the rainy season the lush green vegetation contrasts nicely with the deep blue water of Lake Victoria. 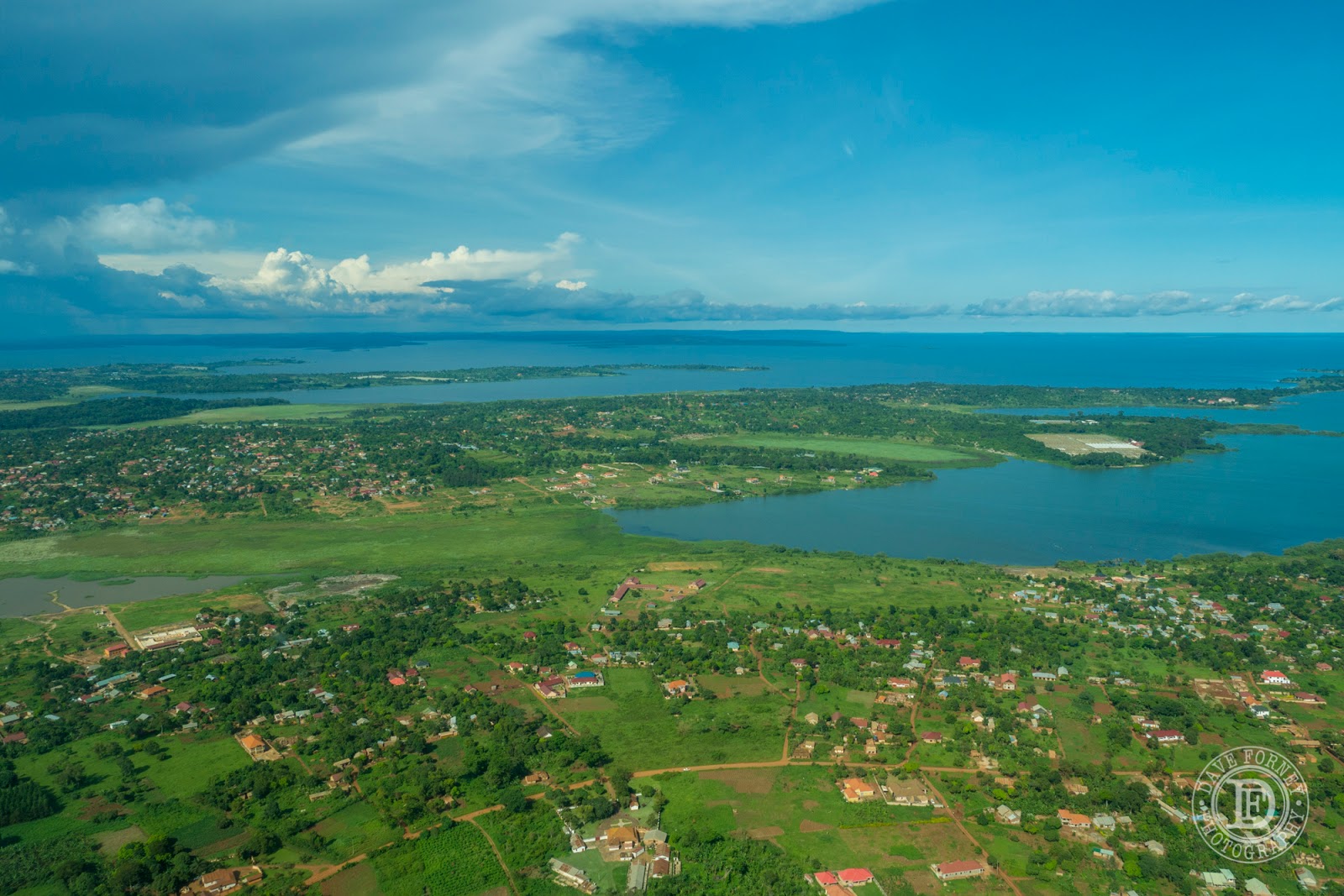 Throughout rainy season showers and thunderstorms come and go throughout the day and night, punctuated by patches of bright sunshine--the perfect recipe to produce vivid rainbows. 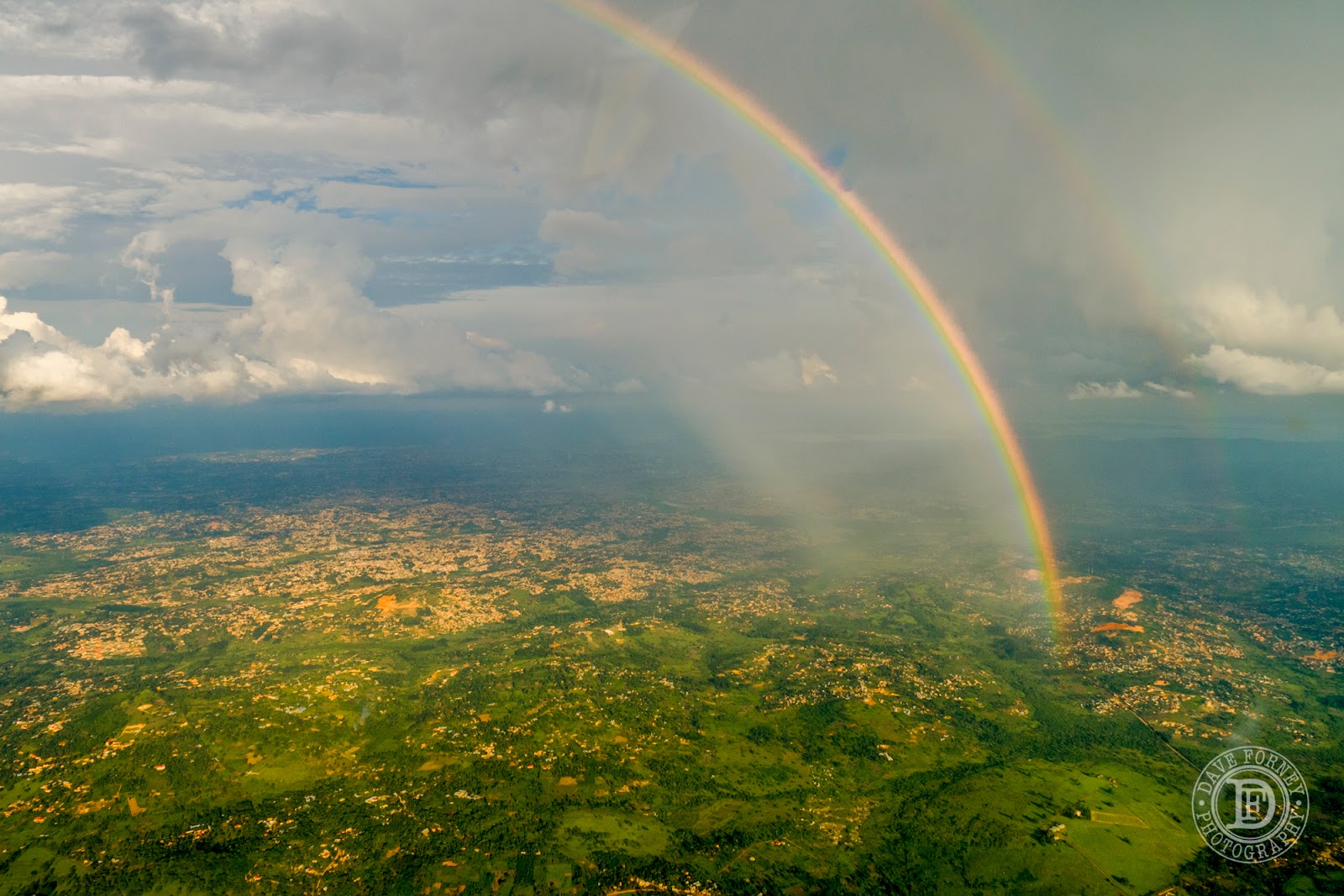 Here is a shot looking out over Kampala, as I flew home late one afternoon after a large rain system had moved through and dissipated. I really never tire of watching the weather--seeing the tropical clouds form and dissipate, mixing with the sun and rain to paint breathtaking views across the vast African sky. 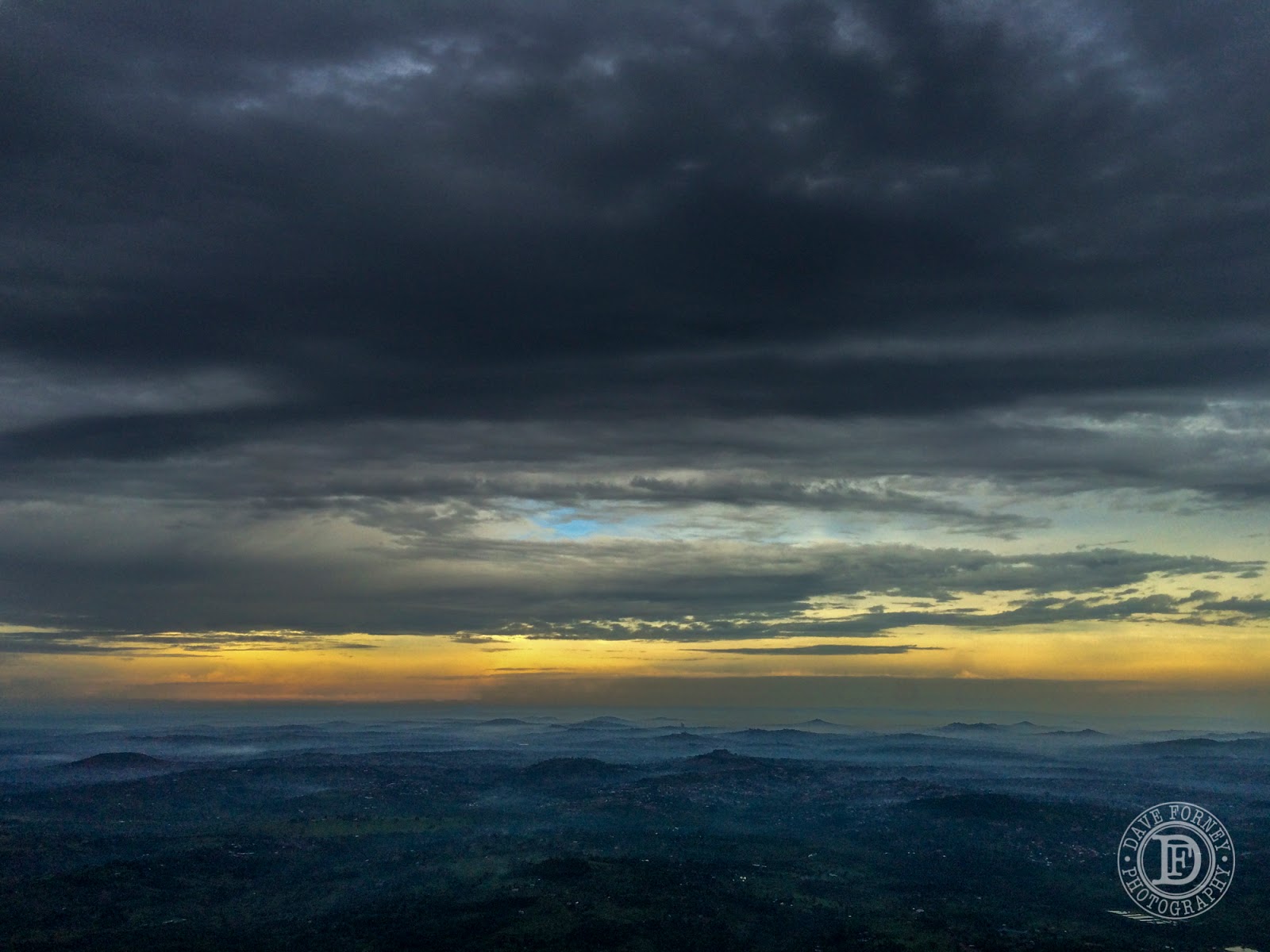 And here's another shot looking out over Kampala from the air... except during the dry season. 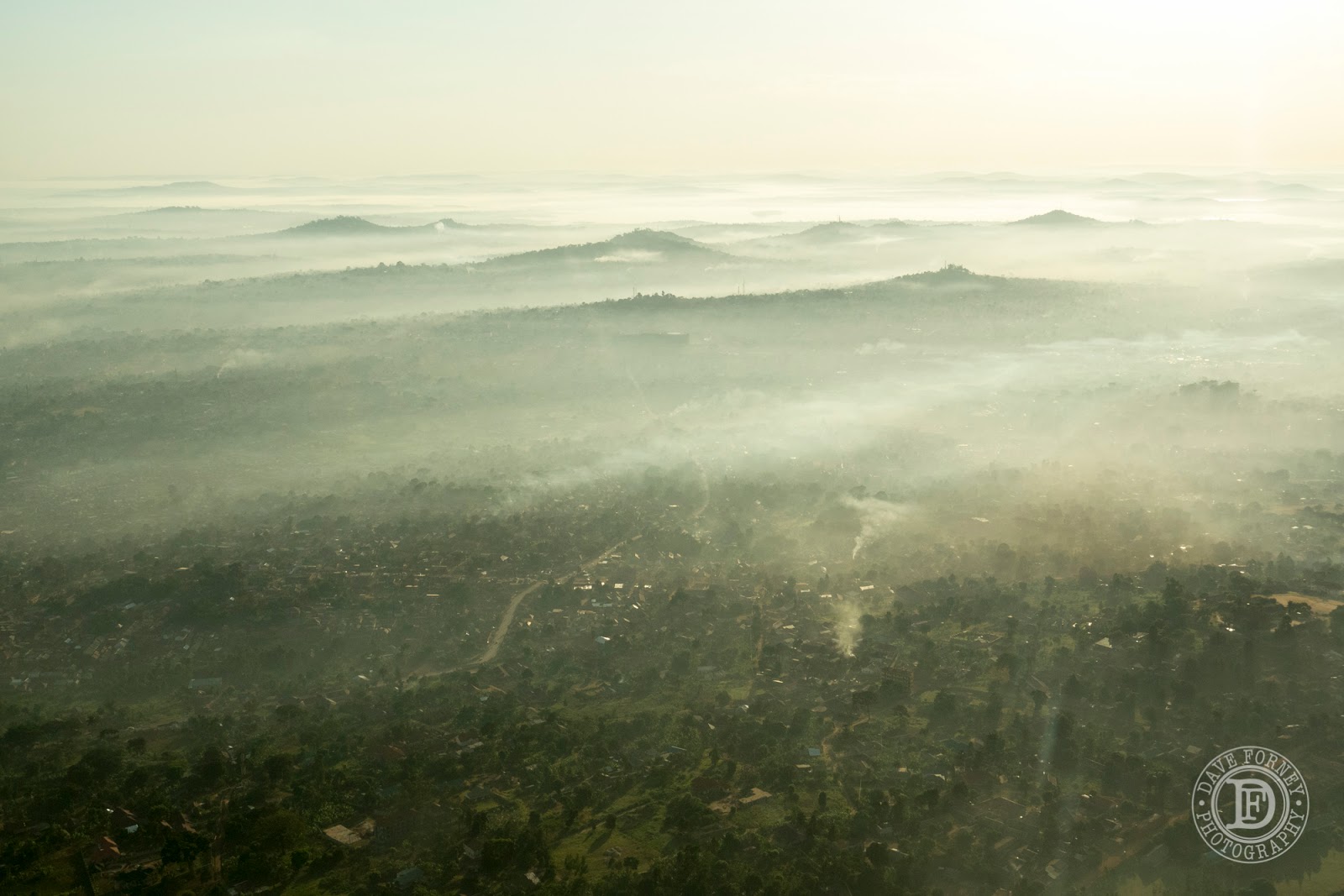 In this shot you can clearly see the taller buildings of the downtown section of Kampala. From the air it almost appears to be a quaint and and quiet town. But if you're stuck in the traffic down there, it's an absolute nightmare. Still, as far as cities go, we enjoy it. 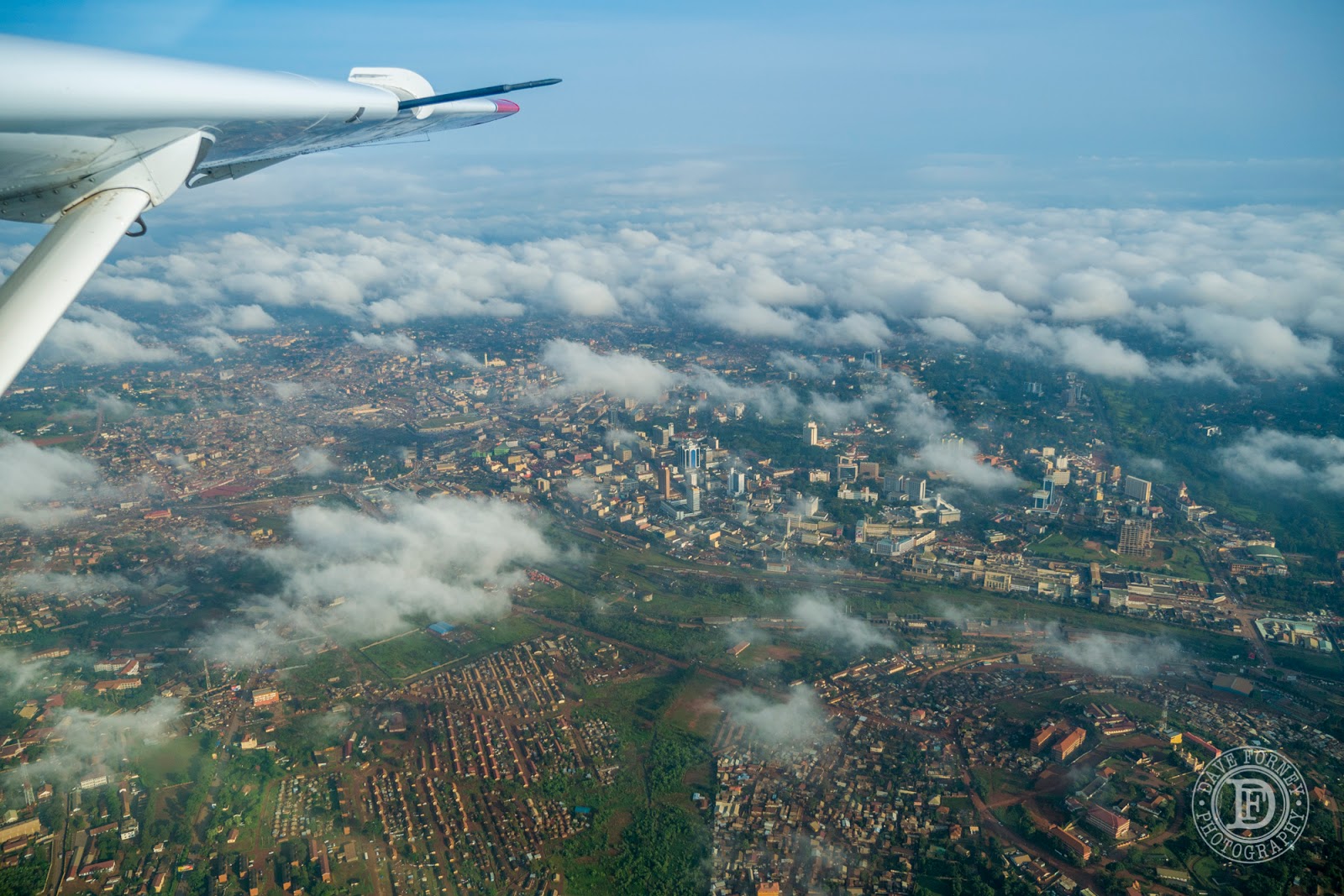 Here's another shot looking towards the downtown section, as viewed from the skies above the 'Industrial Area.' 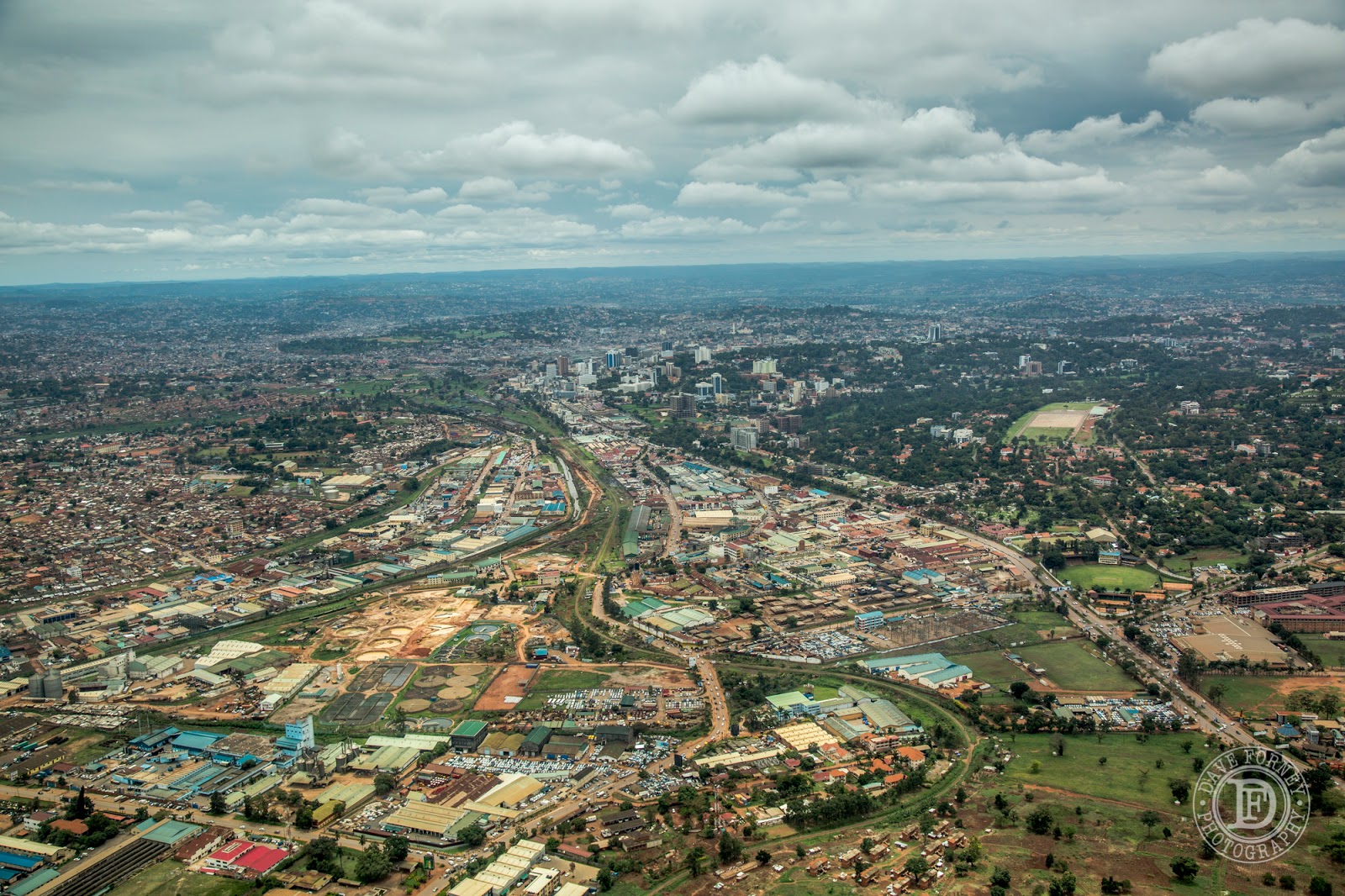 And this is where you do NOT want to be in a vehicle anytime from about 6:30 a.m. to about 11:00 p.m. If you get stuck on the wrong street, or especially in the taxi park, it can take hours just to move the equivalent of a few city blocks. However, on a small motorcycle it's just fun--sort of reminds me of that old video game, Frogger, (where the frog tries to cross the busy streets without getting squished by the cars and trucks,) except this version takes place on a motorcycle, and has real life and death consequences. Fun fun! 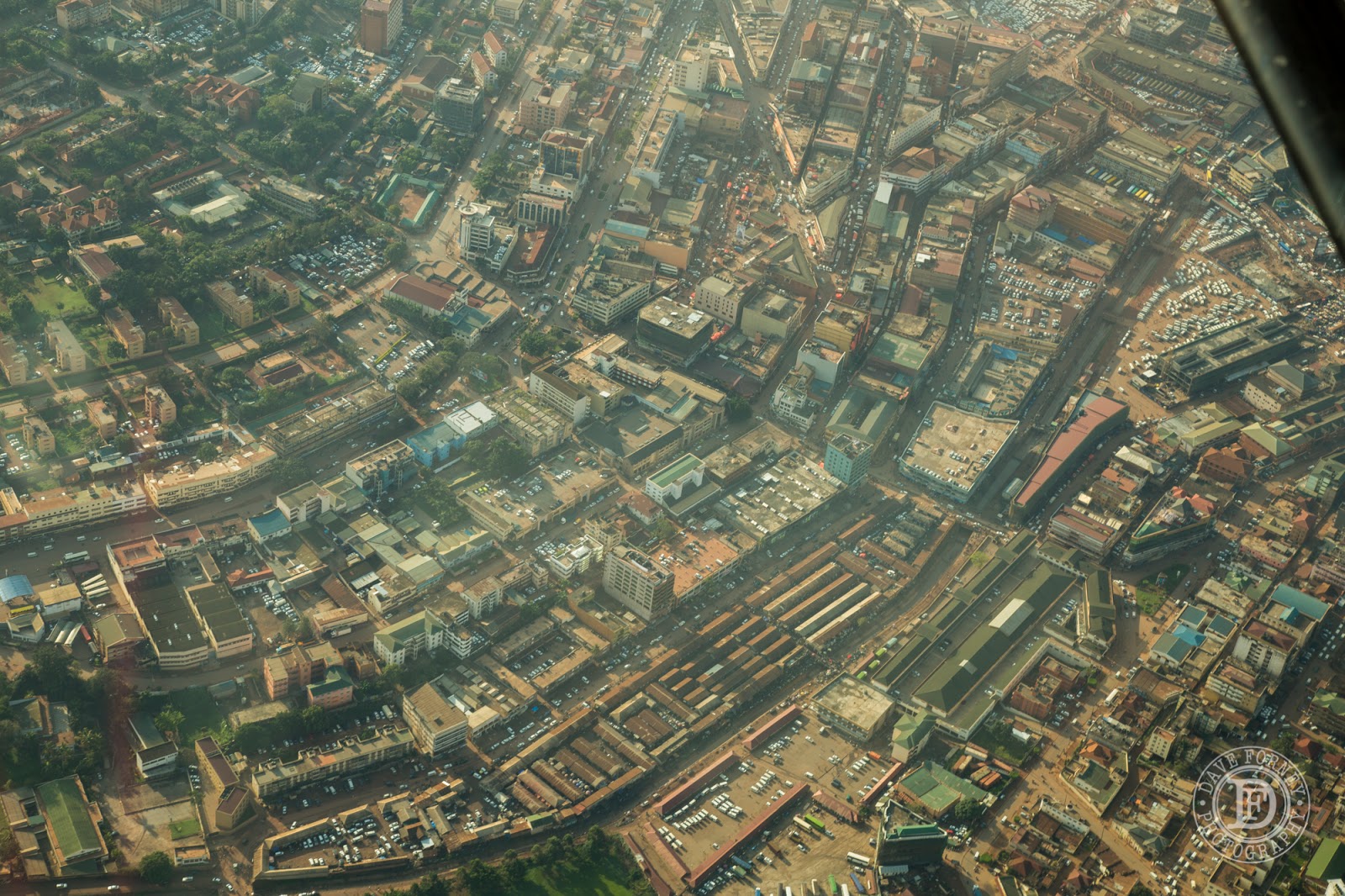 Here is a typical street scene around the outskirts of Kampala. There are certainly a lot of wealthy folks living in and around Kampala. But there are many more who struggle in poverty, surviving hand to mouth on a day-by-day basis. 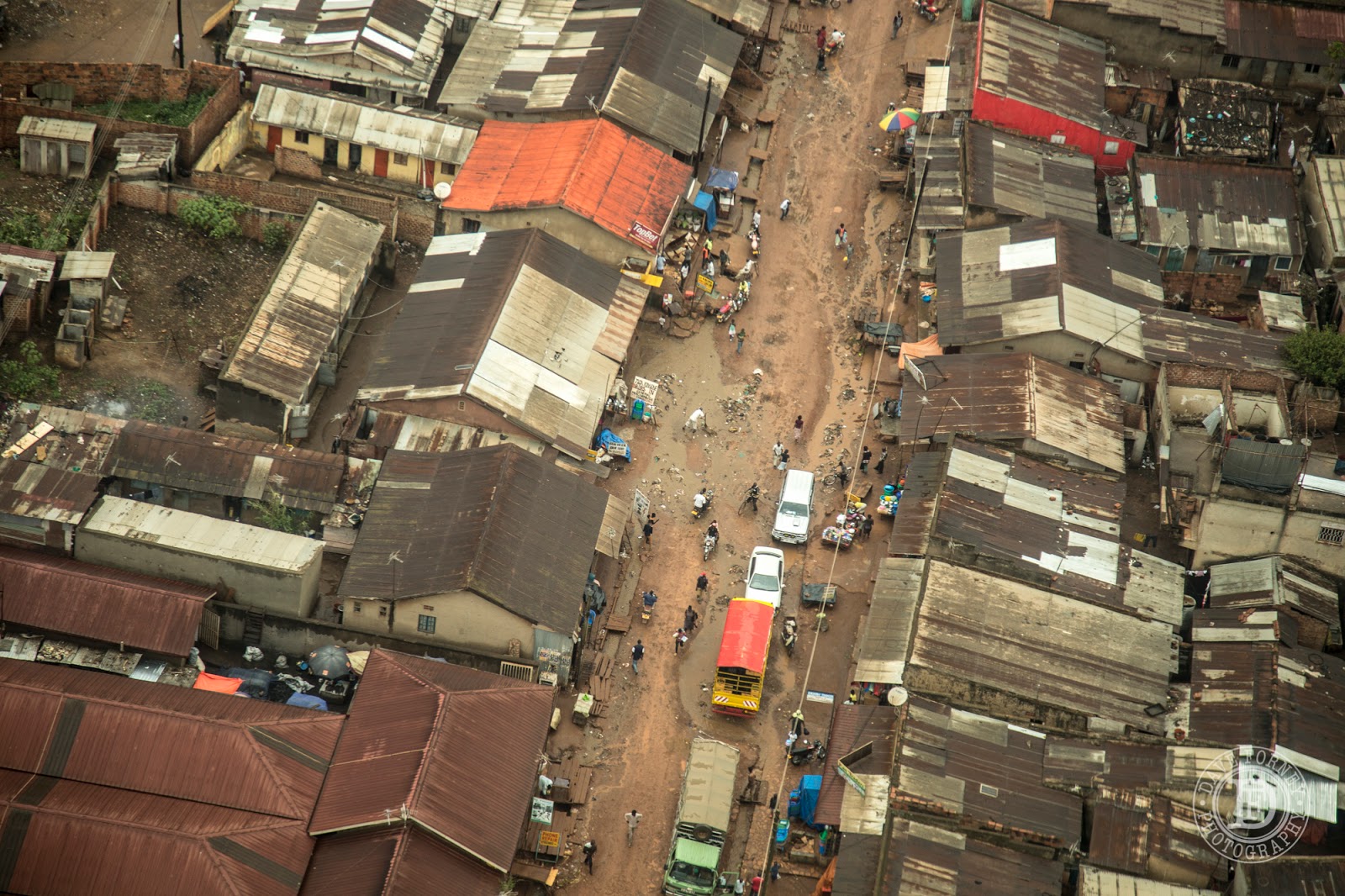 Here's a scene that we fly over every day, as we're on a final approach into our runway at Kajjansi, on the outskirts of Kampala. You can tell that this shot was taken during rainy season, because there are some nice colors visible. If this were dry season, everything would be covered in a monotonous reddish-brown layer of dust. It only takes about 3 or 4 days of no rain before the dust starts to cover everything. 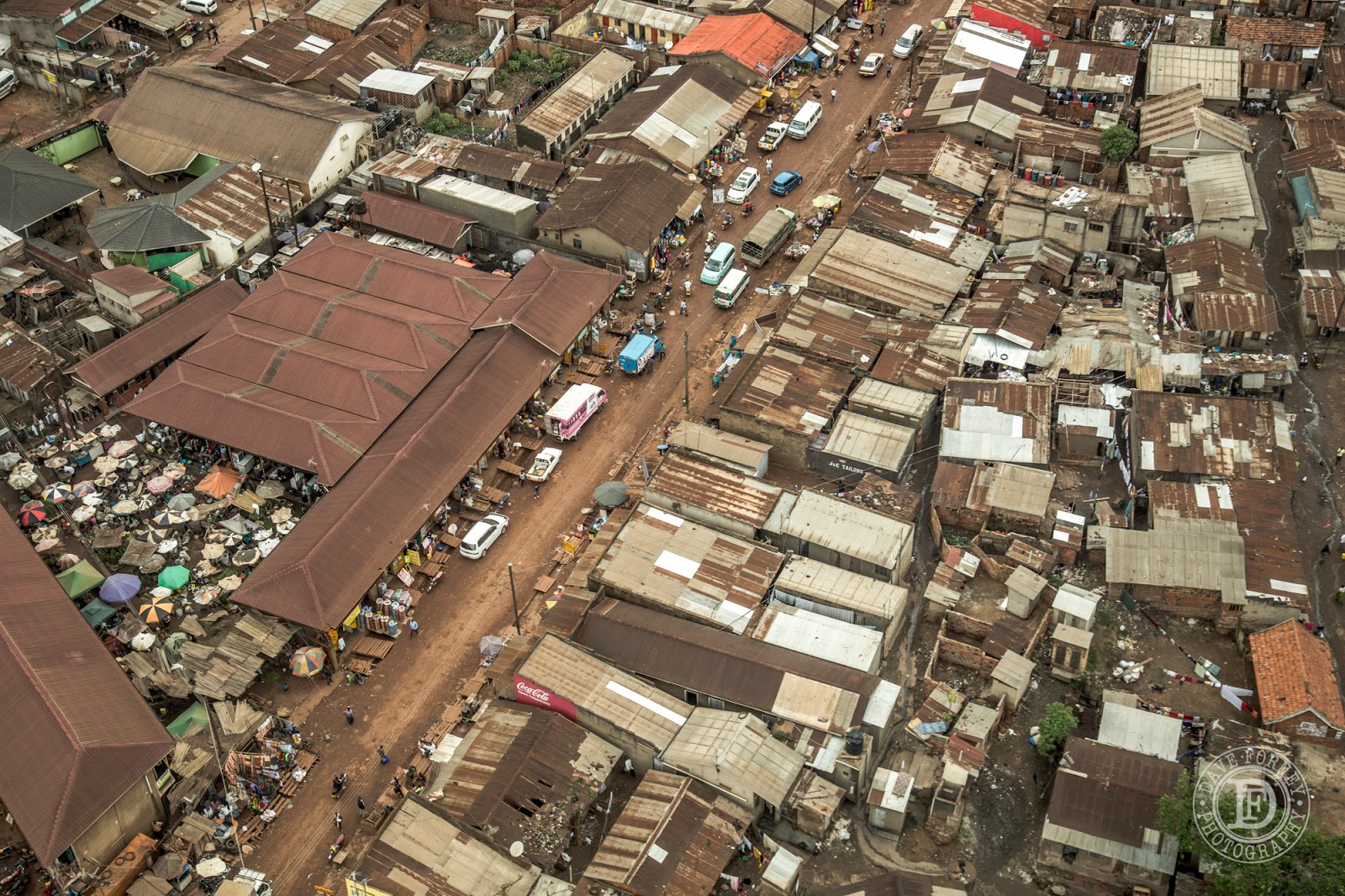 We tend to be country people, not city people. However, as far as cities in developing countries go, we've come to really enjoy Kampala. There's plenty of things that can be frustrating about Kampala, (as there would be with any large city) but overall we really enjoy it. This is Kampala. This is where we live. This is our home.
Posted by Dave at 2:15 PM 1 comment: