Our Speaking Events Get Cut Back!

Well, a lot has been happening in the past few weeks!  Joy and I just completed two weeks of training with MAF International in Ashford, England, and are now at MAF HQ in Nampa, Idaho for a week of standard debrief prior to our furlough.

Many of you probably received the letter we just sent/e-mailed out a few weeks ago with an initial speaking schedule we had lined up throughout the eastern part of the country.  In the past few days and weeks it's become obvious that we needed to make some significant changes to our schedule.  Below is a copy of a new letter that we wrote, that was just mailed out today.  Those of you who receive our letters via e-mail will get it within the next day or two.  The rest should have it sometime in the next two weeks.

Please take a few minutes to read it--especially if you're in the central or eastern part of the country and if you were planning to come to one of our speaking events this fall.  You can right click and save it to your desktop or wherever, and then zoom in on it to make it larger, which should make it easy to read.  Alternatively you can go to our MAF staff page and scroll down the right side to our prayer letters, and download the pdf version.  It may be a few days before this letter is posted there, but it'll be there soon. 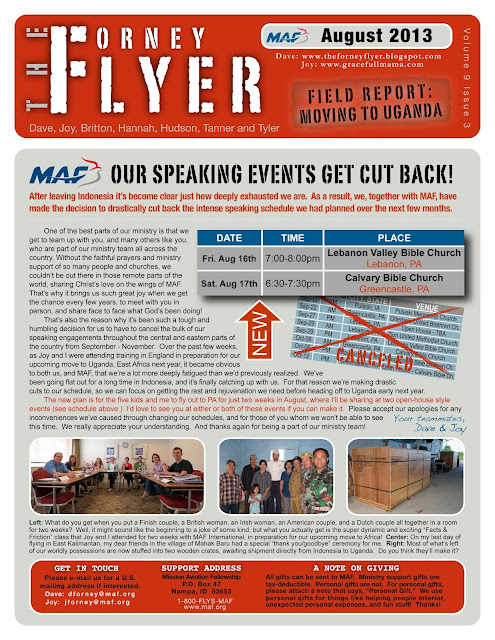 We sure do appreciate your prayers, encouragement, and ministry support!  We're very blessed to have such an awesome ministry team!

Later this fall, after we've had some time to take a breather we'll be doing some sharing in the northwest--mostly in the Gresham/Portland area.  When we have dates for those, I'll post them here.  In the meantime, we're mostly focused on getting the rest and rejuvenation we need.  Thanks for understanding.
Posted by Dave at 7:30 AM 4 comments:

This is it.  My last 24 hours in Indonesia. (If you don't know what I'm talking about, see my earlier post entitled "BIG NEWS".)  I'm not a particularly sentimental person, so I'm not going to try to get all mushy on you.  But it would simply be inaccurate to describe our family's time here in Indonesia as anything less than life-changing. So I have to at least try to put it in perspective.

Joy and I have been married thirteen years, eight of which we've spent mostly in Indonesia!  Many of our best memories together have been here.  And of course there's been plenty of tough times too.  This has become "home" to our kids--indeed, our younger ones aren't even able to conjure up early memories from the U.S.  We've gained friends that will last a lifetime, and given a lot, physically, emotionally and spiritually, to the life and ministry here.  There's been plenty of ups and downs, struggles and challenges, but this chapter in our lives--our time in Indonesia--is something that will significantly impact us and our kids for the rest of our lives.

It's tough to say "goodbye", but we do so with the confidence, and peace, and excitement that comes from knowing that the same loving God that brought us here to Indonesia back in 2005, is still right here with us as we go into the next chapter--as we go to Uganda. 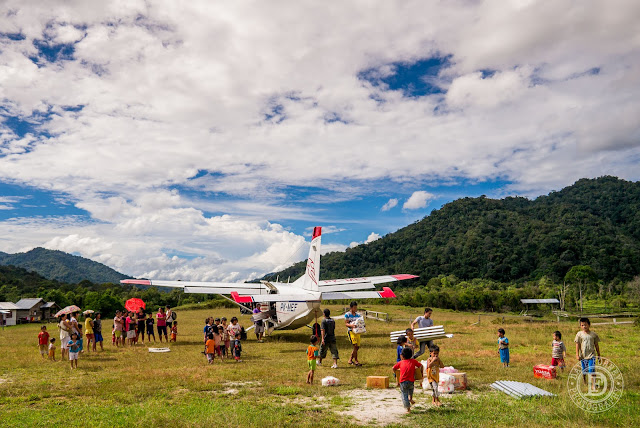 Of course, that doesn't necessarily make it any easier to say "goodbye".  We're going to miss a lot when we leave here. 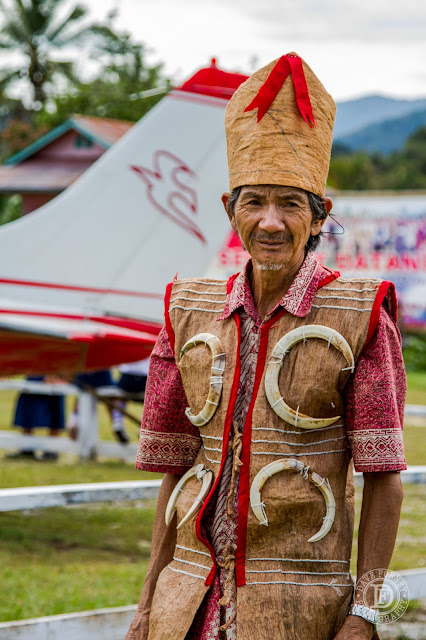 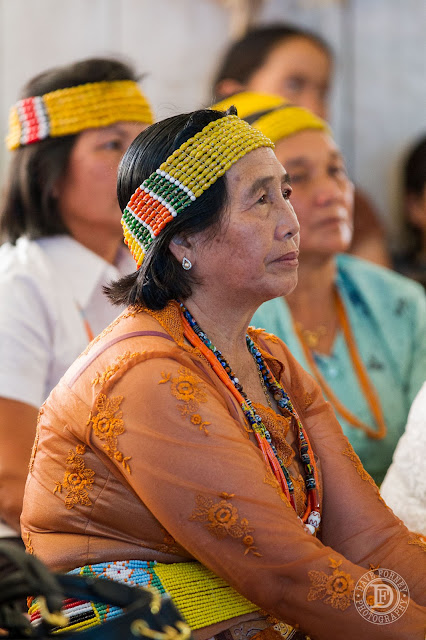 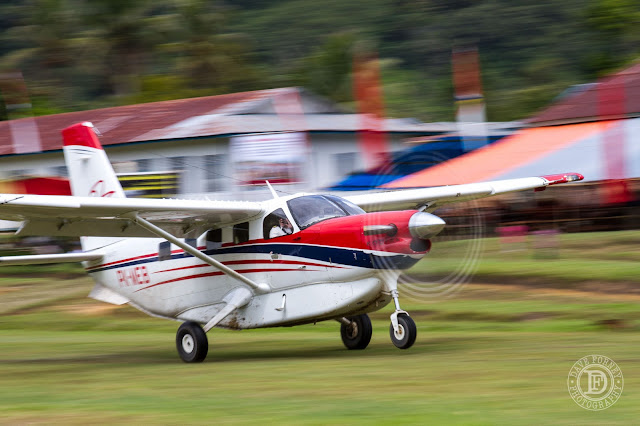 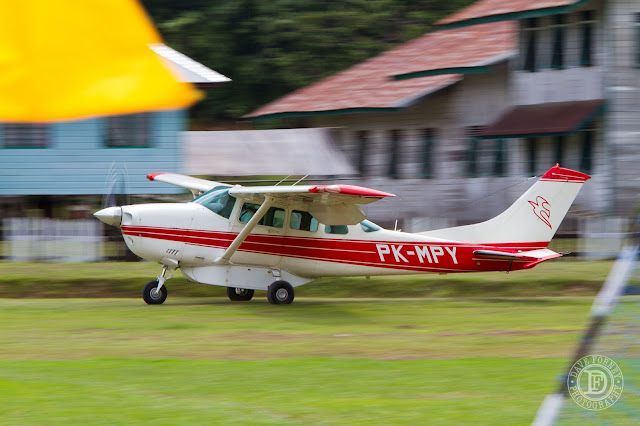 I'm going to miss serving and hanging out with our friends in the villages interior. 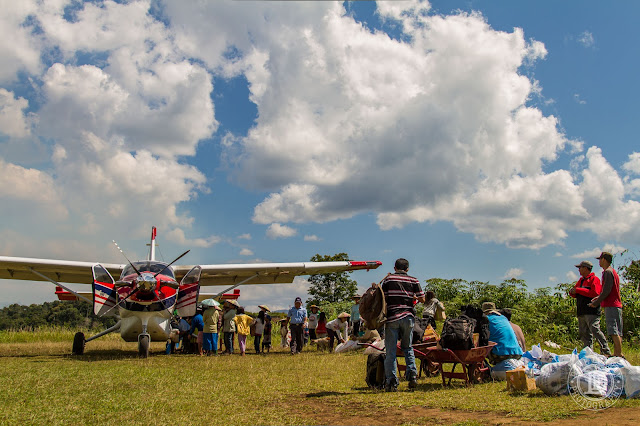 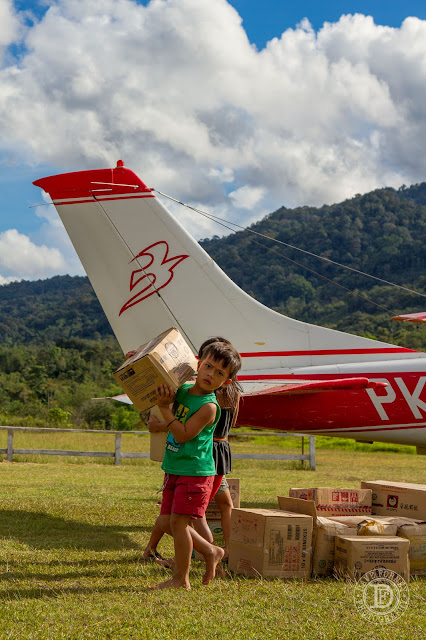 And a whole lot more!

But I think it's a great way to leave--appreciating what we've been a part of, grieving what we're "losing", yet looking forward to the future with all of the new unknowns, challenges, and changes that come along with it.

If we live our lives in the safety of our own comfort zone, afraid to take risks, afraid to invest in peoples' lives, or meaningful causes, for fear that one day we might fail, or that one day we might have to experience the pain and uncertainty of change, I think we miss the entire point.  Life here on earth is short.  And we don't want to look back one day and have regrets.

So we're ready for the next challenge, the next adventure.  We're ready to walk hand-in-hand with our heavenly Father into the unknowns of our next assignment, because the one thing that IS known is that  He will be with us.  That Jesus will not only be our expert guide, but also our faithful companion!  And from that--from Him--we gain the peace and courage and strength to say "goodbye" to Indonesia.  In Christ's strength, we're ready for what's next!  So with a heart full of a strange mix of sadness, excitement, and nervous expectation, I say, bring it! 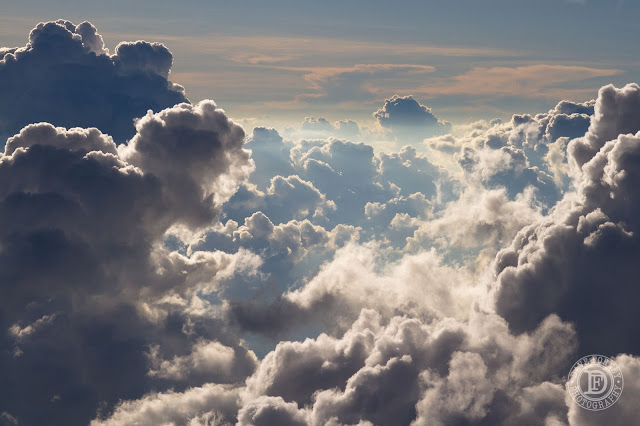 FYI: the next weeks and months are going to be very busy for us--lots of traveling, training, speaking etc. I will continue to post updates to the blog as able, but it probably won't be quite as often.
Posted by Dave at 8:01 AM 6 comments:

I was off on Monday because I've been working Saturdays.  So Tuesday was my first day this week.  I was scheduled to give airstrip checkouts to one of our other pilots, into two of our most marginal airstrips in East Kalimantan.  These are tough strips!  Our guys usually don't get checked out in these strips till they've flown here for about three to five years!  You've gotta fly very precisely, and everything has to be just right, or it's a no-go.

Well, I landed exactly on the spot I was supposed to, with the exact speed I was aiming for--everything was perfect, and I still slid further than ever before.   That's because everything wasn't perfect.  The airstrip condition was way, way wetter than described on the radio. 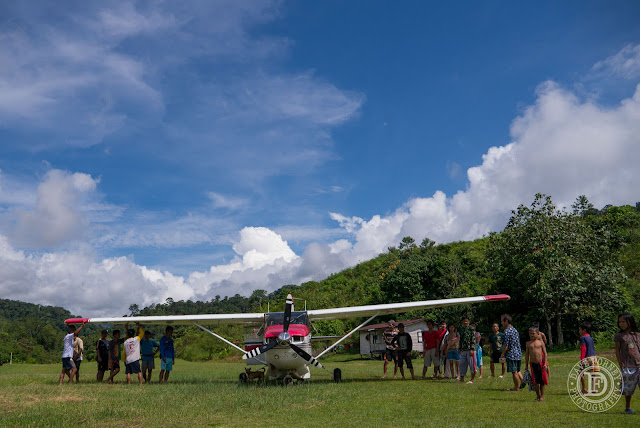 It was a great demo for the other pilot, who was along to get checked out at this strip, that despite doing everything "by the book", a strip like this can still throw a curve ball at you.  Frankly, the weather and airstrip condition reports were quite misleading, and had we known that we wouldn't have landed.  However, because we always have some built-in-margin in our strips, everything was o.k.  Had I landed long, or been fast, or caught some wind--perhaps it wouldn't have been.  But then, that's why we don't check new guys out here--you need to be able to read the wind, and nail your speeds and touchdown spot, and have the confidence to say "no" when something isn't right.

Well, after coming to a stop I turned the airplane around and promptly got stuck in the mud, right there in the middle third of the "rollable surface".  So we had to shut down and get about 20 people to help us push it out.  Needless to say, we did NOT do an airstrip checkout there that day. 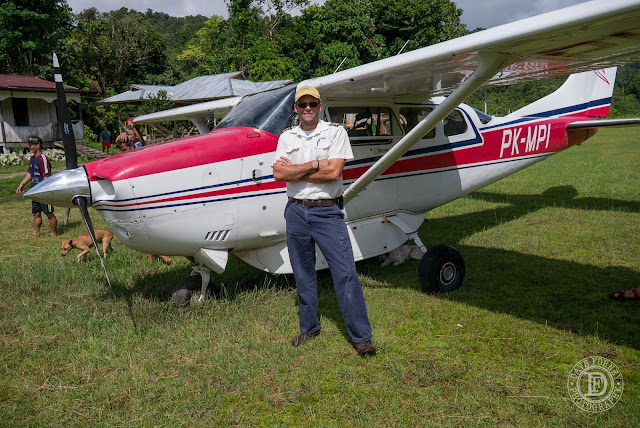 Next we went to another strip--even shorter, but slightly more sloped.  Suspecting from previous experiences I've had here, that the radio report I received that morning on this strip might also be inaccurate, especially related to the condition of the grass, I first did a low pass over the strip, before committing to land.  Although the grass looked a bit tall, it seemed o.k. from the air.  Plus our airstrip agent had said that the grass was cut and the strip was in good condition.

However, upon landing, it became obvious that this was not the case.  A small patch at the top end was cut, but in the landing area the grass was waste high.  On a very marginal strip like this, that's not something to mess around with.  So yet again, we cancelled the checkouts and left empty.  So we never got any airstrip checkouts done that day, but hey, at least we came home in one piece with an airplane in good condition.  Better to play it safe! 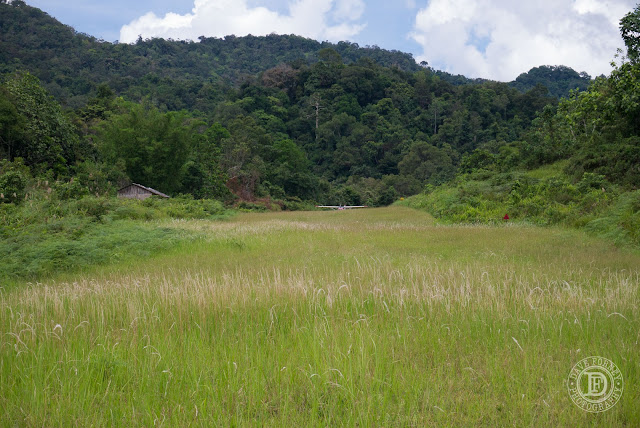 Today, my final day of flying in Indonesia, was tough for a whole different reason.  All day long I was saying goodbye to my good friends in villages throughout East Kalimantan--both in person and over the radio.  Since I was the only MAF pilot flying up in this area, there were a lot of folks calling on the radio and saying goodbye--especially from villages where I wasn't able to land today.

It was tough.  For the past week I've continually had thoughts of "this is the last time that..."--fill in the blank.  Today it was all about my friends in the villages.  It was an emotional day for me.

In Mahak Baru, the village heads, the local village government representative, the pastor, and my good friends the MAF agents, and a bunch of other folks, were waiting there when I arrived.  I was deeply humbled and honored as they each shared with me how much they appreciated our family's contribution in serving their village and people, as well as investing into their lives.  (We've stayed overnight in that village on a number of occasions, and have really developed close friendships with a number of them, as have our kids with their kids.)

I was further humbled as they presented several beautiful gifts, explaining the symbols and reasons for each gift and what they represented.  It was very touching! 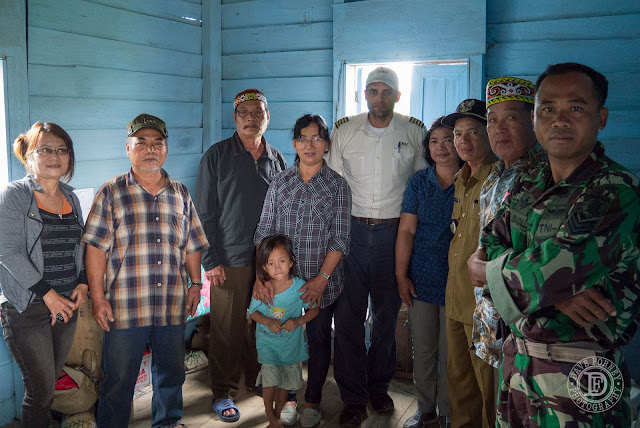 Before I left, they painted my face with what I believe was ash.  From what I understand, this was a real honor, and again I was really humbled by it.  They explained that this is their tradition when a family member goes away on a very long trip.  There was a lot of laughter, but also tears. 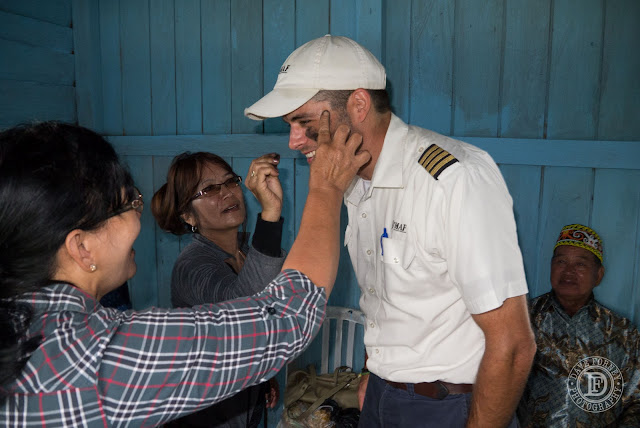 I flew the rest of the day like that, having promised to keep the "paint" undisturbed, at least till I got home.  Everywhere I went after that, people immediately recognized what had happened, and the significance of it, and commented about it.  Again, I was very humbled, and can only say that it's been an incredible privilege to serve wonderful folks like this, who I'm honored to call my friends!

And I thank YOU, who are part of our ministry team, for your faithful prayers and ministry support that enable us to be doing this.  Our family is just a small part of a much larger team, and the gratitude that was expressed by my friends all over East Kalimantan today, goes out to all of YOU!  Thank you from the bottom of our hearts, and from theirs! 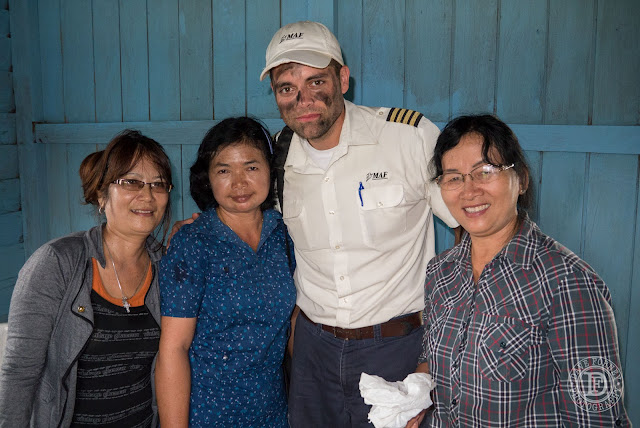 It was a long flight day, made even longer by the numerous goodbyes and cantankerous weather.  So I found myself arriving back in Tarakan well after 5:00, when there were no other airplanes in the area.  So having received special permission from the control tower, I did a low pass over the MAF hanger, to the delight of our national staff who were still hanging around waiting, and then landed for the final time in Tarakan.  And at 6:15pm, having finished up post-flight checks and paperwork, I turned the lights off in the now-quiet MAF office and hangar, locked the doors, and drove home on my little motorcycle after a long flight day, for the last time in Tarakan.  It's been an honor and a blast!