Northern Scenery, Way Back When...

Today I'm returning to the "Way Back When..." series, highlighting some of the surreal beauty we enjoyed in the boreal forests of the far north. 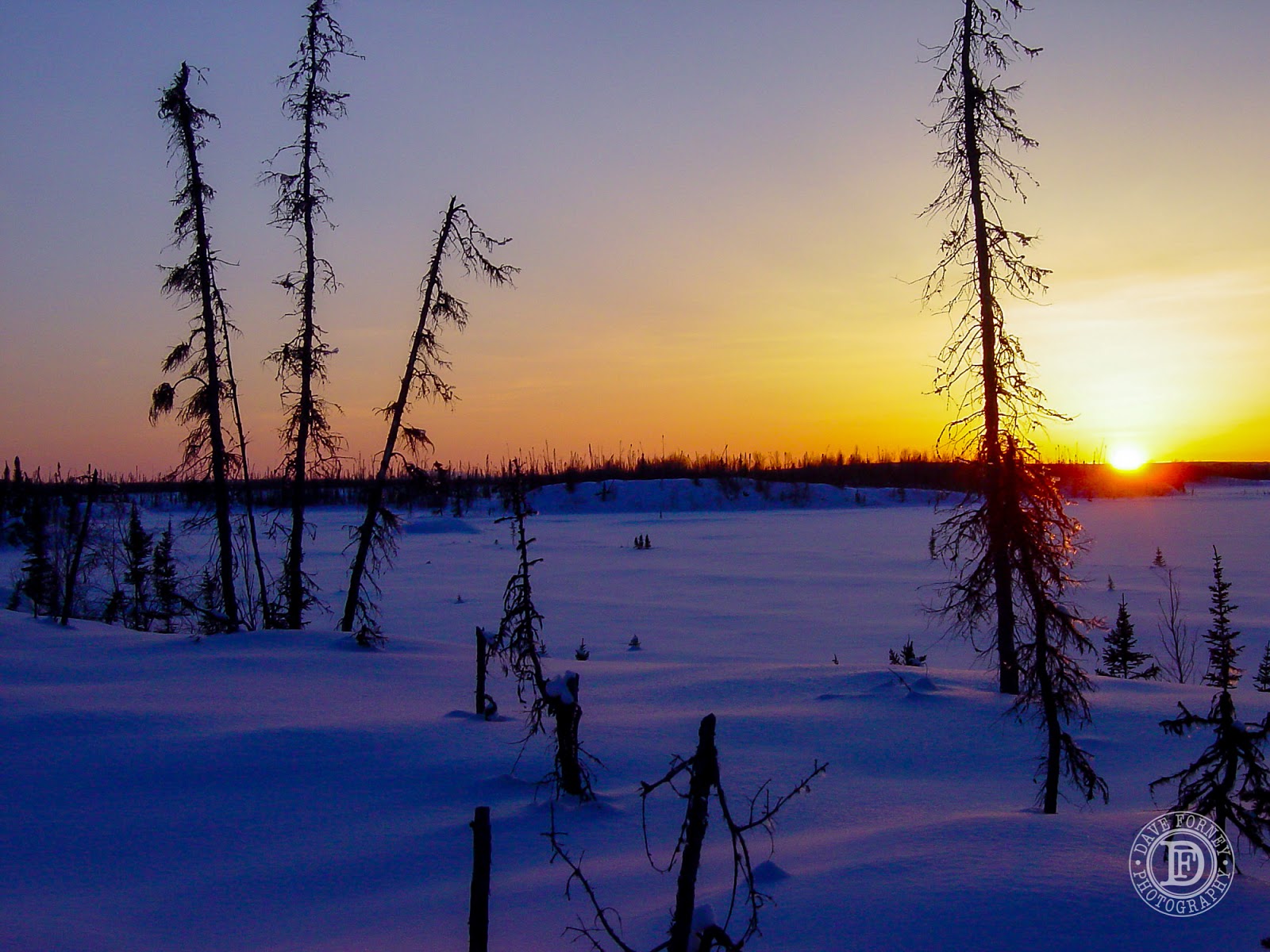 Obviously most of these photos feature frigid beauty. That's because it was cold and snowy/icy much of the year. Also, there were no roads going anywhere outside of the village itself. So during the very short summer, we were basically trapped in the village, since we didn't have a good boat with a reliable motor. So the long winters was when I was actually able to get out and about. 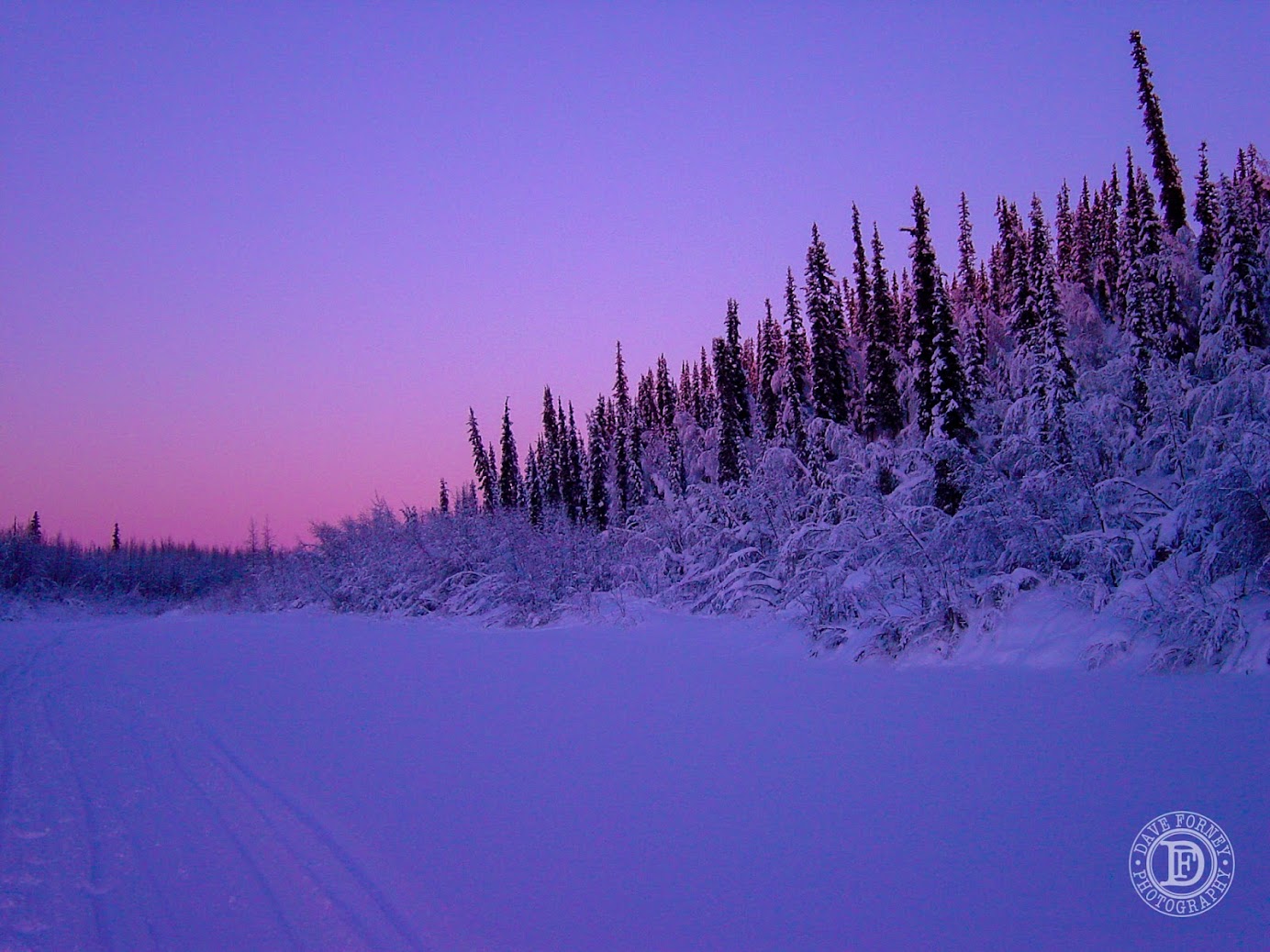 During the cold months I could go just about anywhere on my snow machine. I made trips to the "wood yard" to cut wood for our stove, accompanied local guys on their traplines (to get furs that they tanned and used to stay warm in winter) and hunting for food, and did some long trips to other villages when there were dog races (I helped pull loads of dogs and/or dog food). 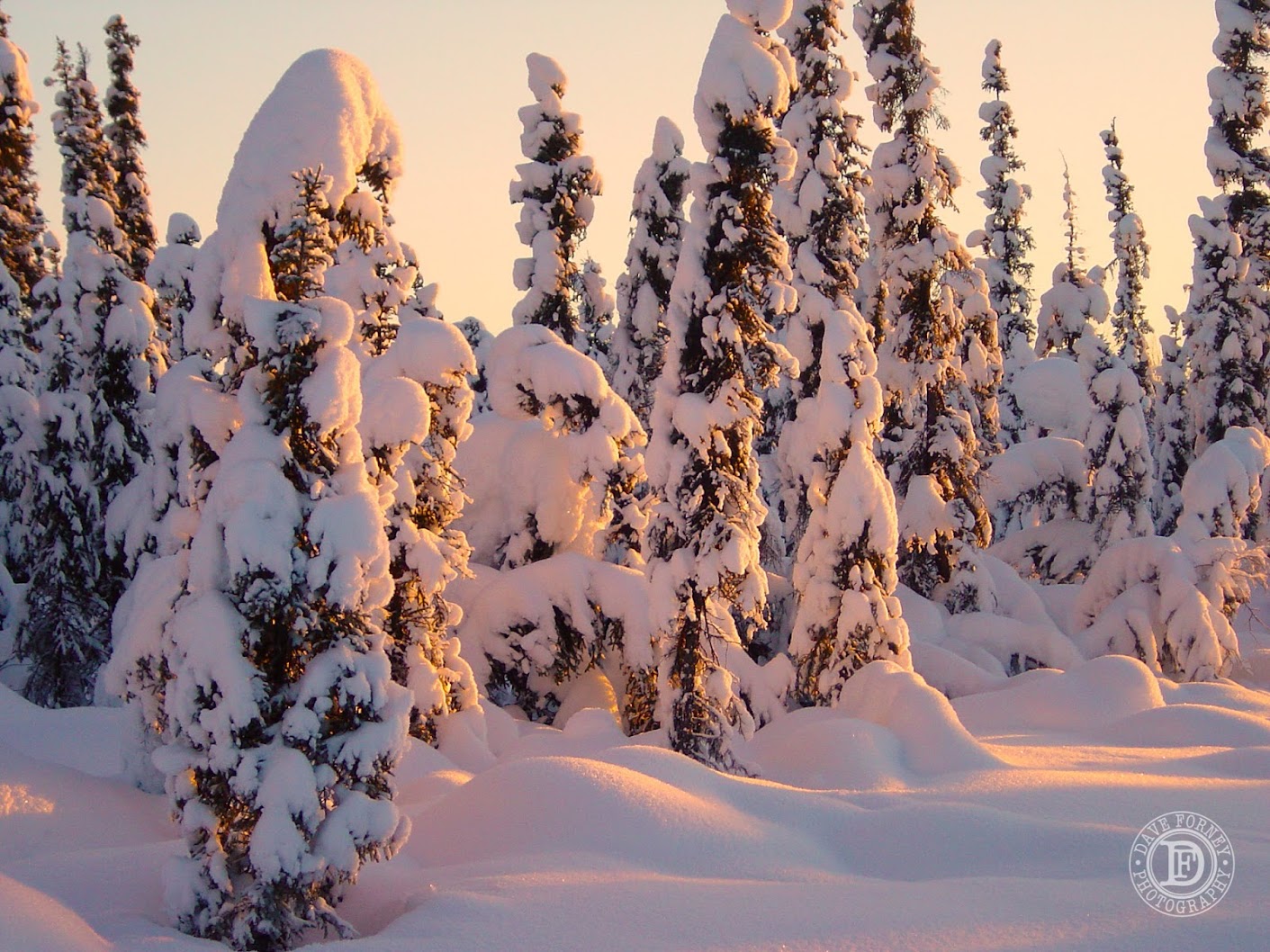 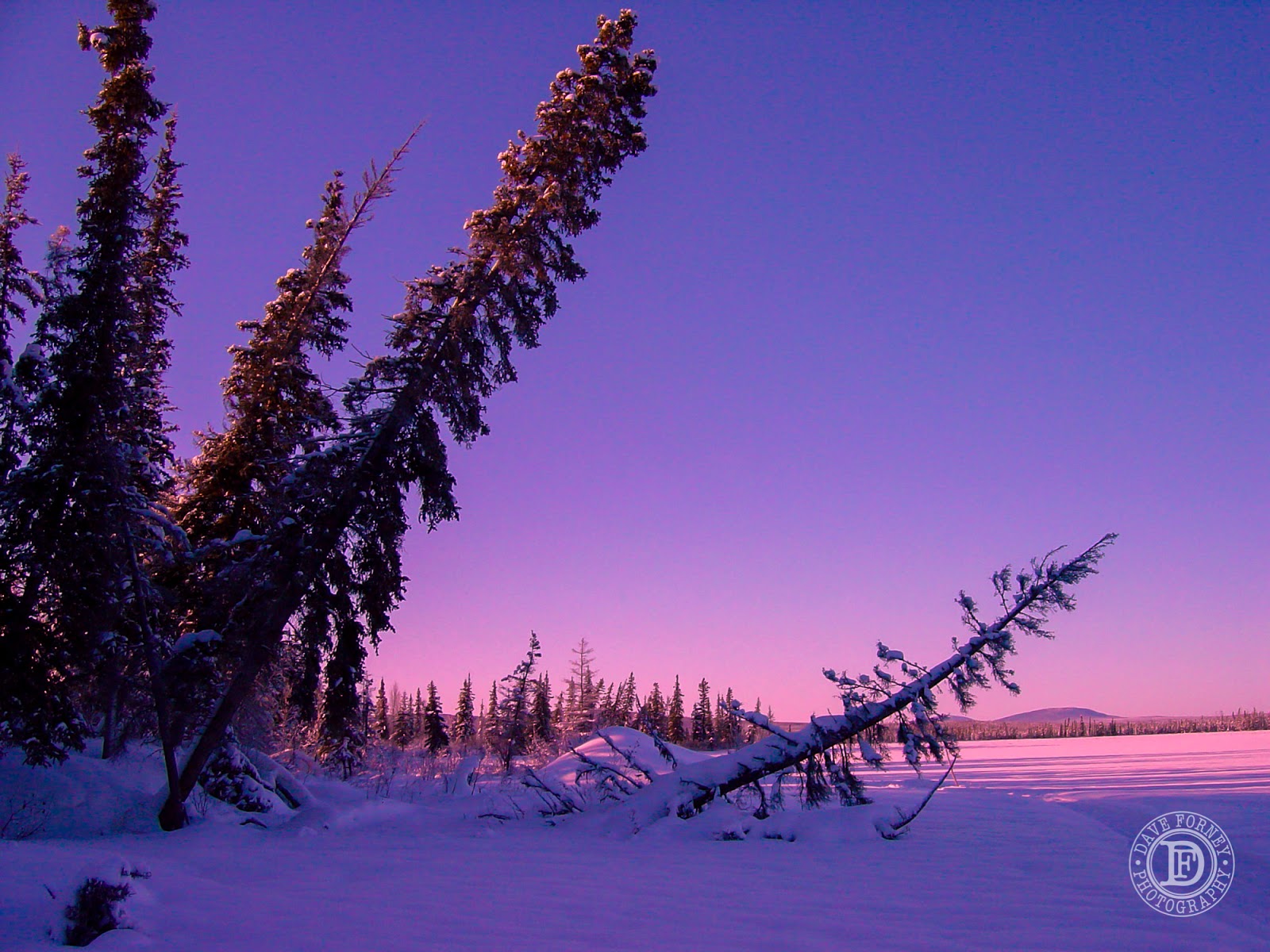 When I look back at these photos I have to laugh a bit. The beauty in the landscape is quite obvious. But it's a bit embarrassing to see the poor quality of the photos. I was still shooting with film cameras in those days (usually shooting slides) but I had also just purchased my first digital camera, which was a huge joke compared to even the cheapest cell phone camera today. Some of these shots, like the one below, were taken on slide film, and many years later I scanned them, complete with dust and marks, into digital. 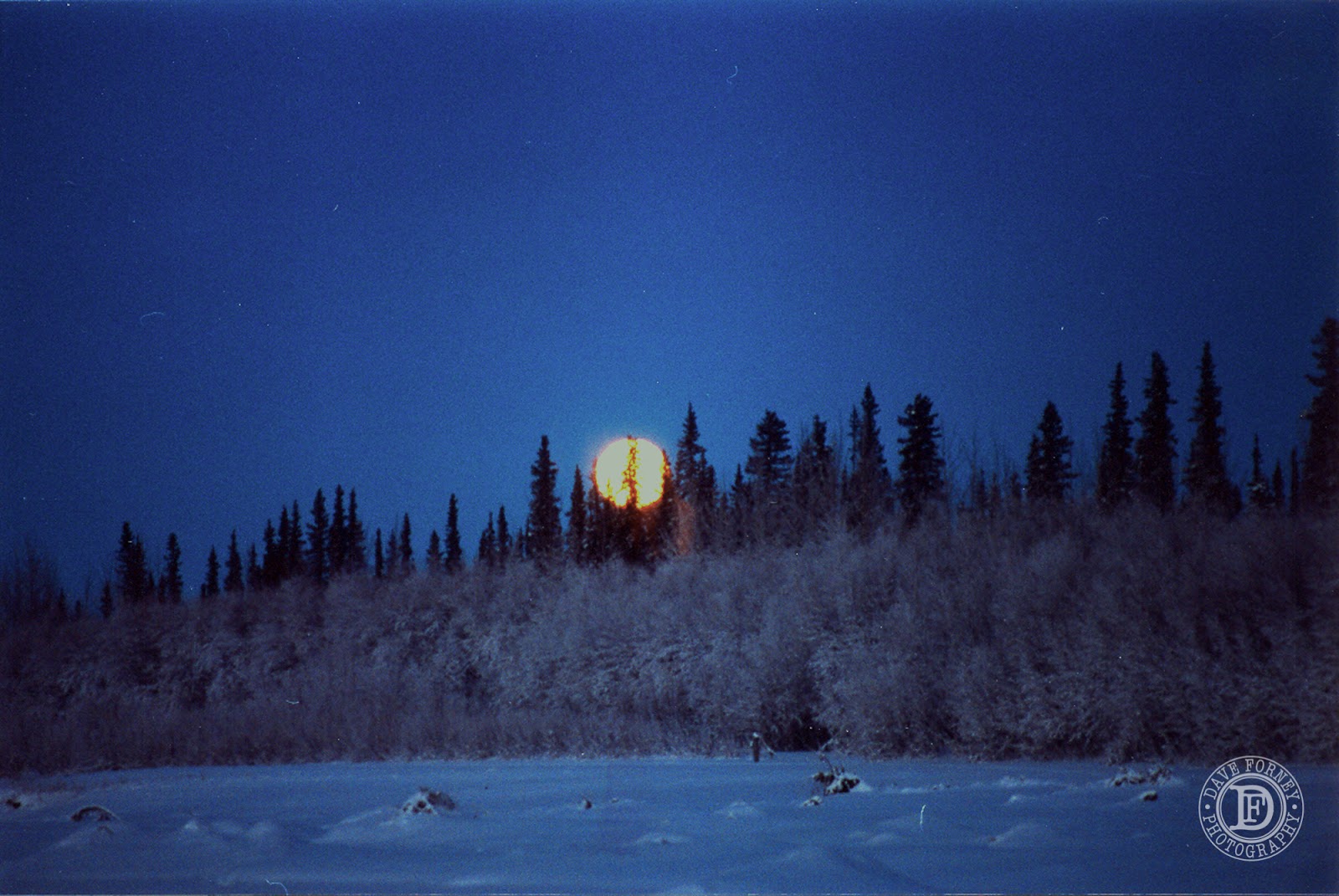 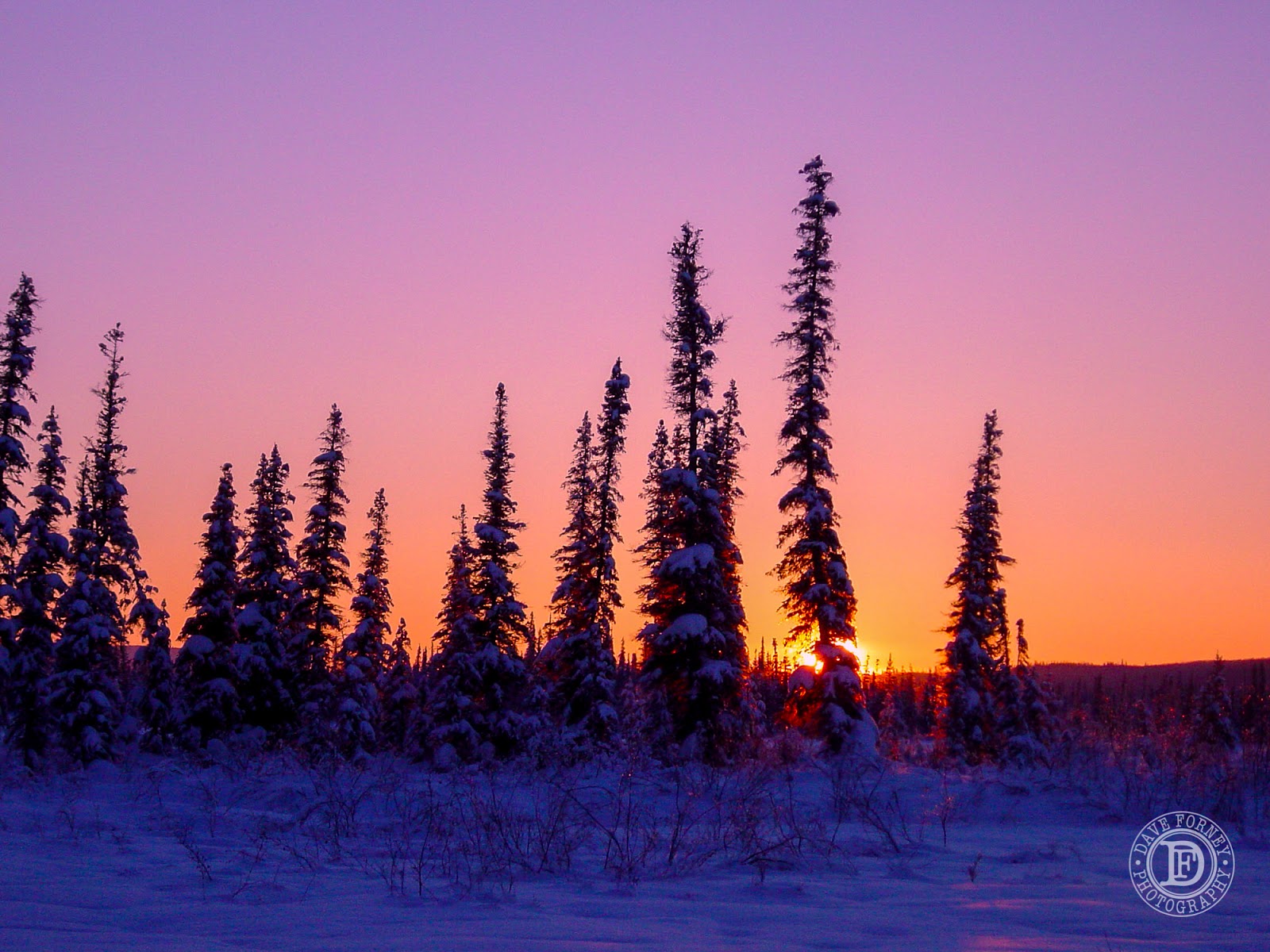 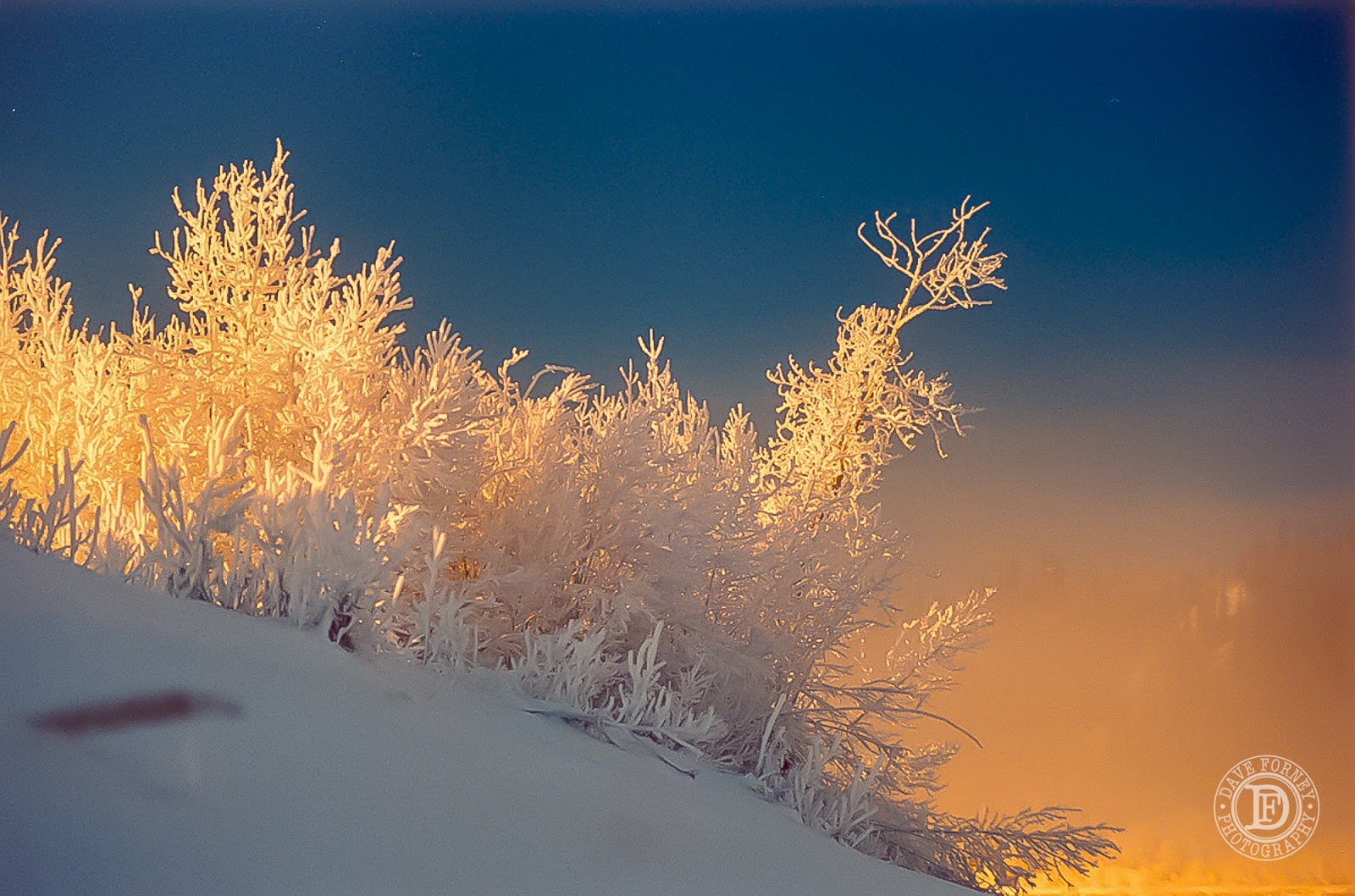 This was called 'blue ice' for obvious reasons. I didn't see it very often, but ran across it this time on a long trip to a different village. It was really creepy because although it was very thick (probably 5 or 6 feet or more) you could pretty much see right through it. But what made it really unique was how slick it was. Most of the rivers and lakes froze solid and then got covered with snow. Occasionally the ice would crack under the weight off the snow (as the water underneath depleted, leaving the ice hanging above like a bridge) and then when the weight of the giant slab of ice would push down onto the underlying water, it would push the water up through the cracks and flood the ice. But the overlying water would 'hide' under the snow creating 'overflow' which was actually quite dangerous. There were signs to spot overflow if you knew what to look for (they taught me) but if you got into it unexpectedly, it would very quickly fill your entire snow machine with slush and water, which would instantly freeze, and within seconds you could find yourself so stuck that you would never get your machine out again until it thawed in spring and fell right through, sinking to the bottom of the lake.
But in the case of this blue ice, it was so slippery that snow didn't seem to stay on the surface, but would instead just blow away. And I found out that if you try to drive across it, you don't get very far before you come to a very long, sliding halt. Then, when you try to push the machine, both you and the machine slide away in opposite directions, almost like you're in space or something. Weird but cool. 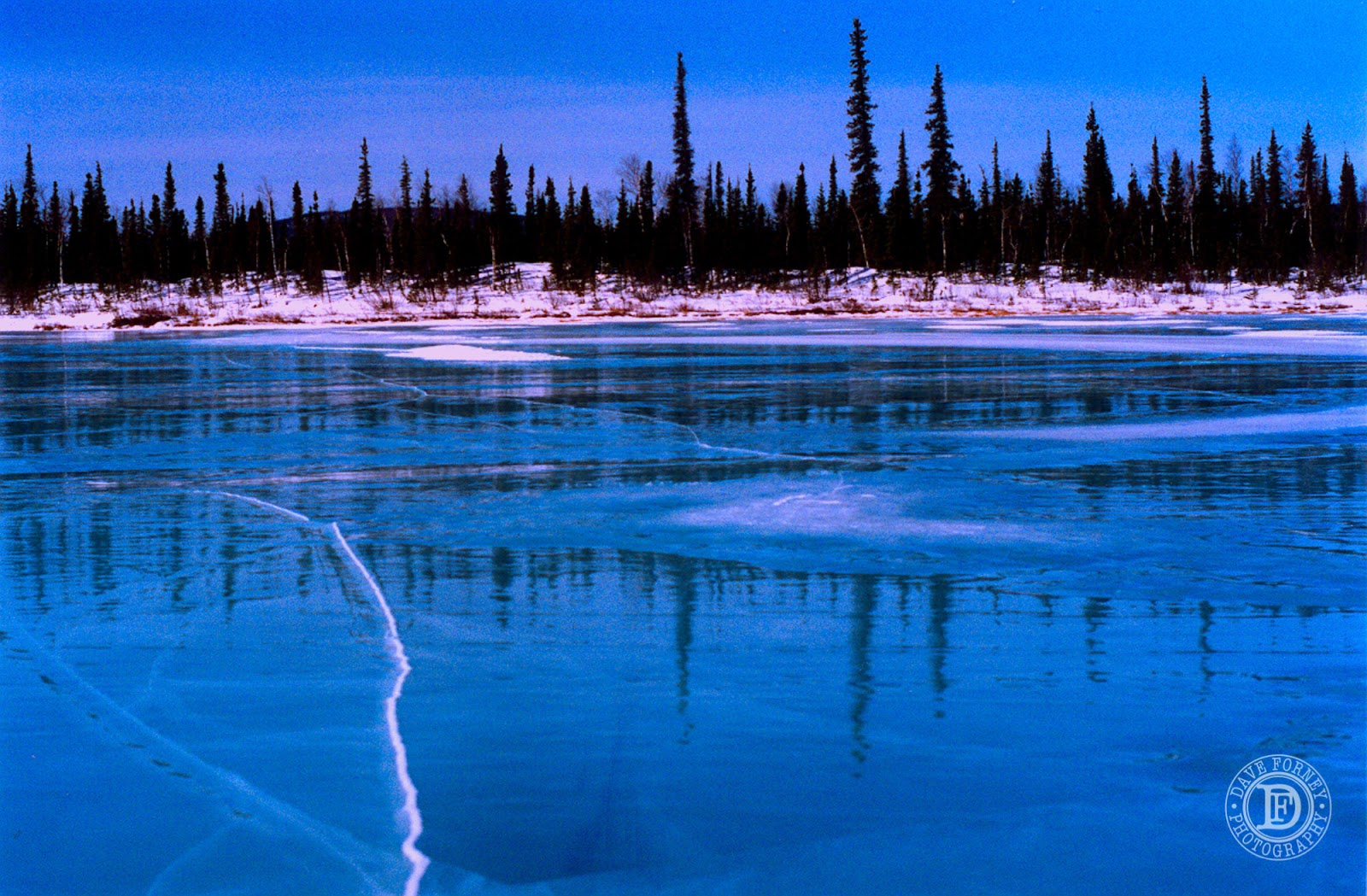 The northern lights were insane. We saw them so often and they would light up the whole sky. Green was the most common color, but we also saw shades of pink, purple, red, blue, etc. Sometimes you could hear a crackling type sound, or almost 'feel' them as they were so intense. It was difficult for me, back then, to get good shots of the lights, b/c my digital camera had way too small of a sensor to take photos at night, but my film camera had other challenges. I found that the film often got 'exposed' directly, right through the camera case, by the intensity of the aurora borealis. Somehow my slides would come back and there would be vertical lines spaced evenly across the entire role, each fuzzy line overexposed. In fact, even in the photo below you can see some of those lines at the very top, spaced evenly all the way across. But often they extended all the way down across the image, rendering it useless. If I had a chance today, I'd love to re-take some awesome photos of the northern lights. 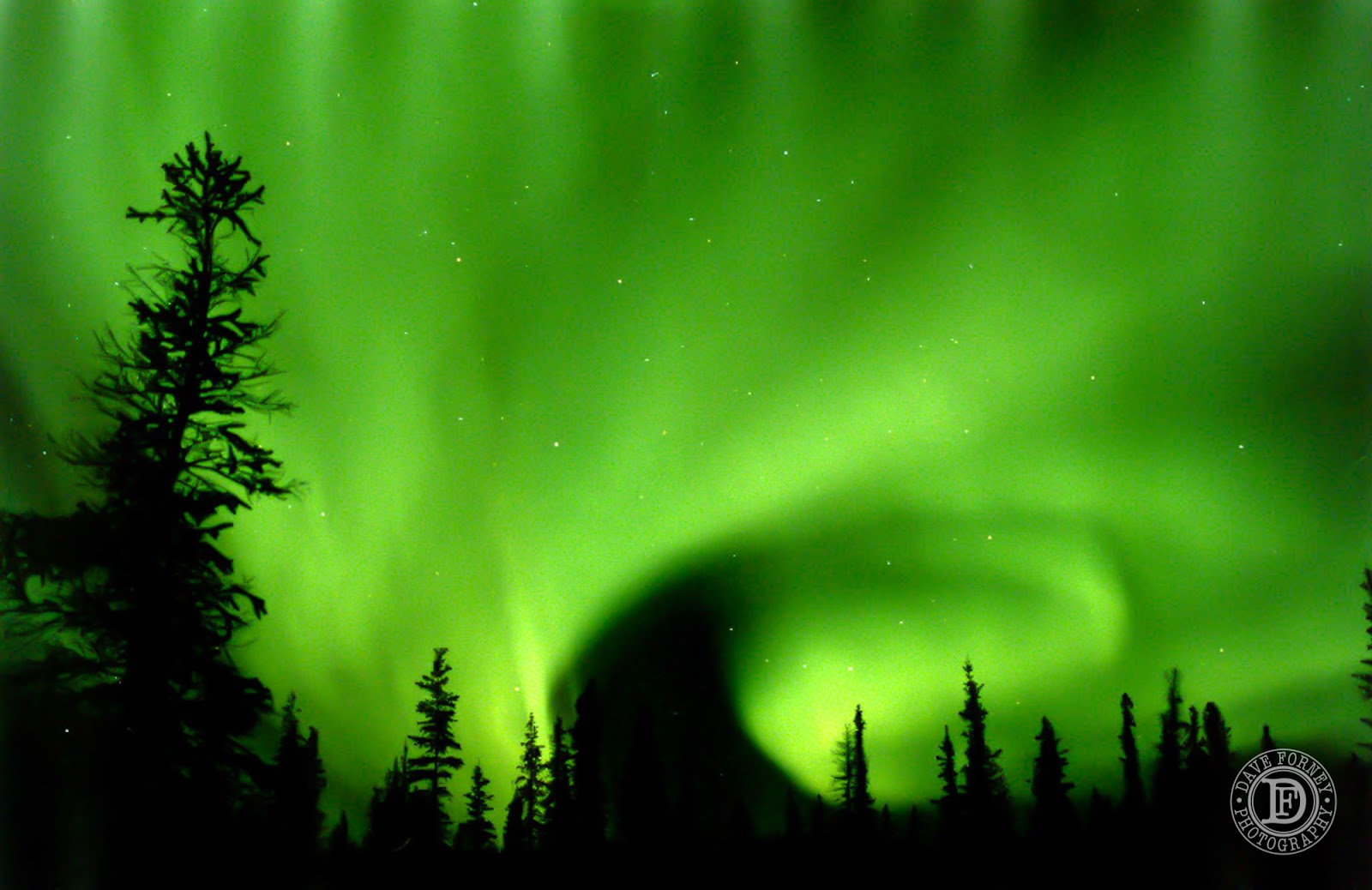 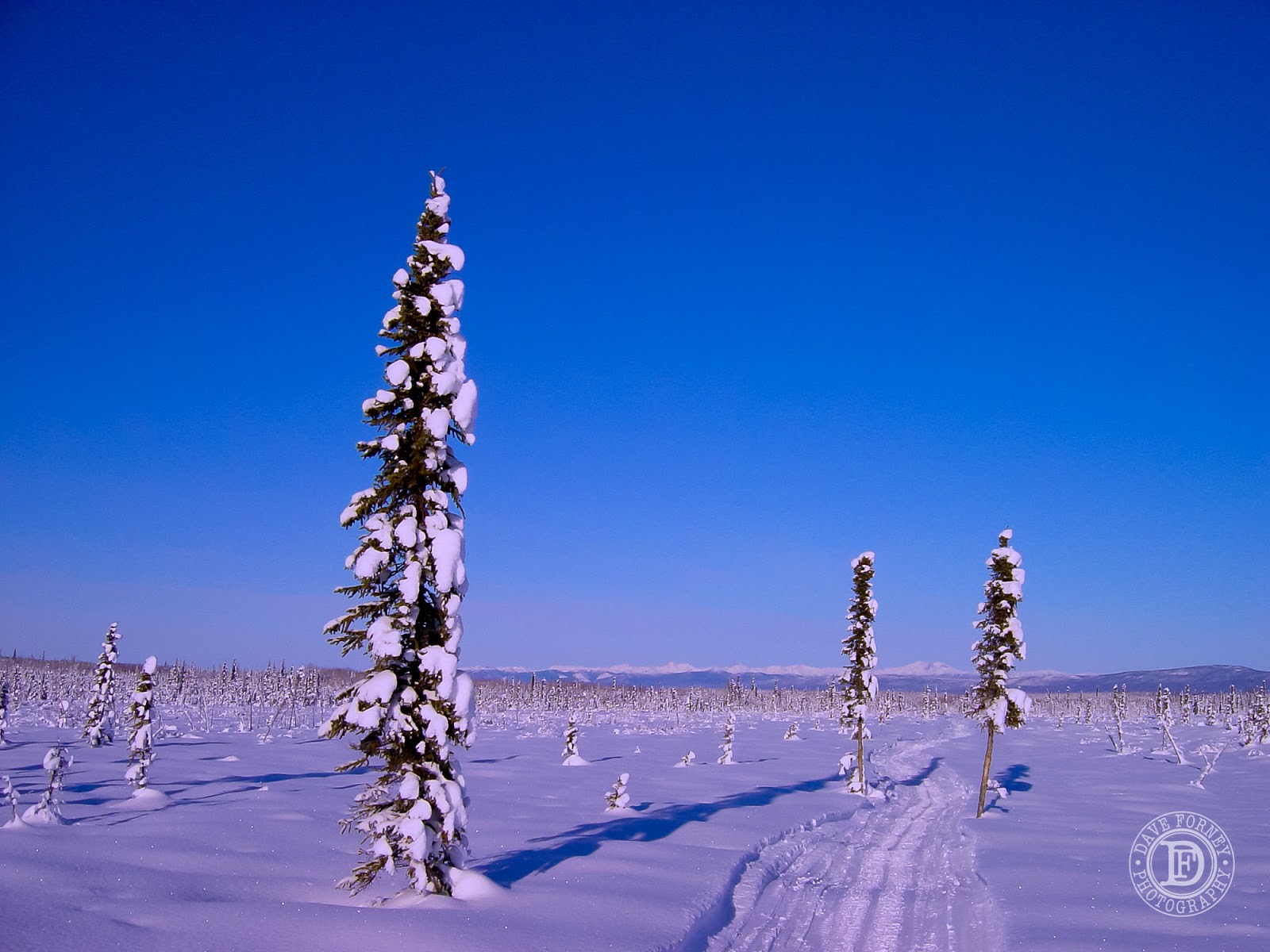 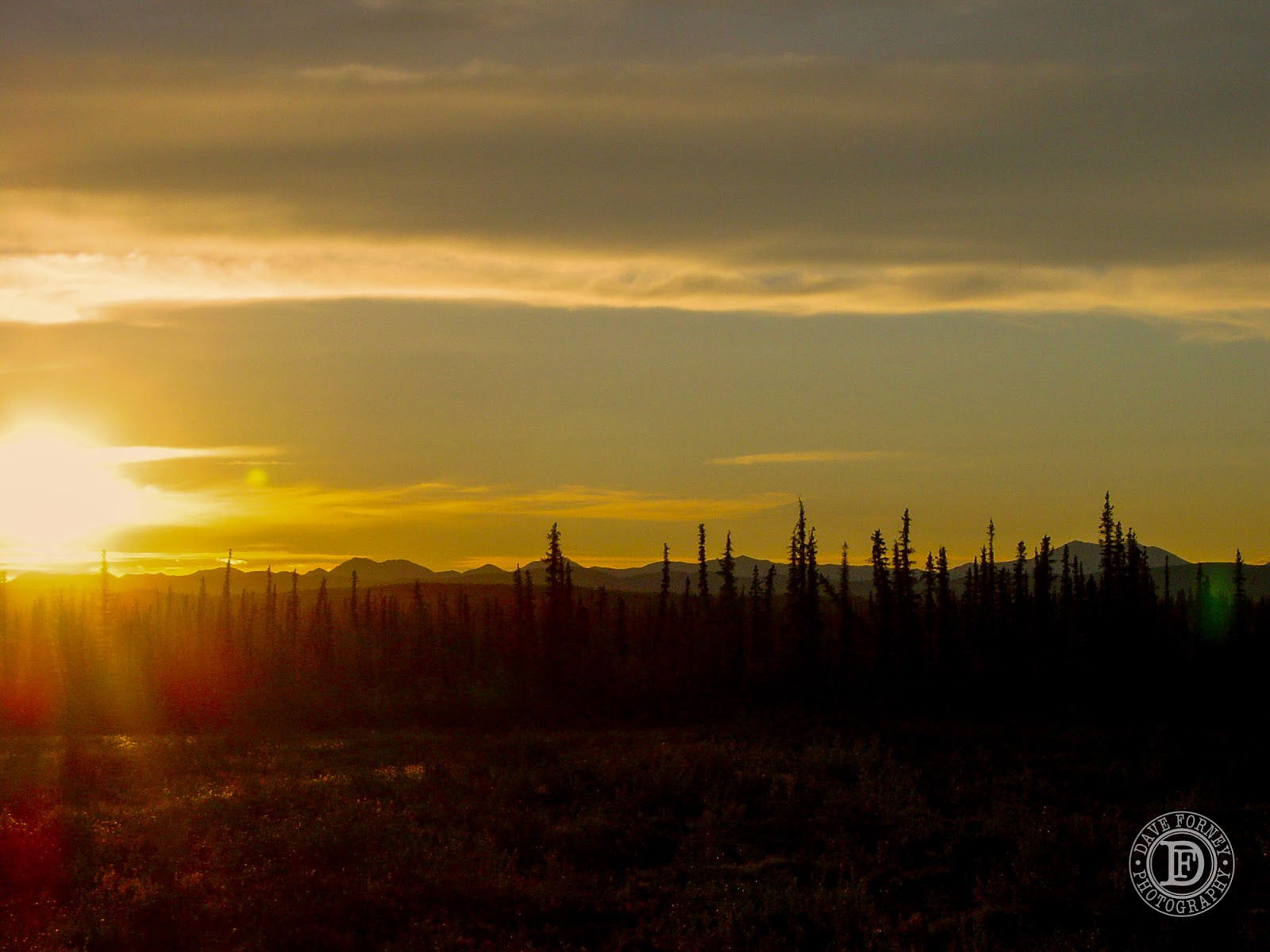 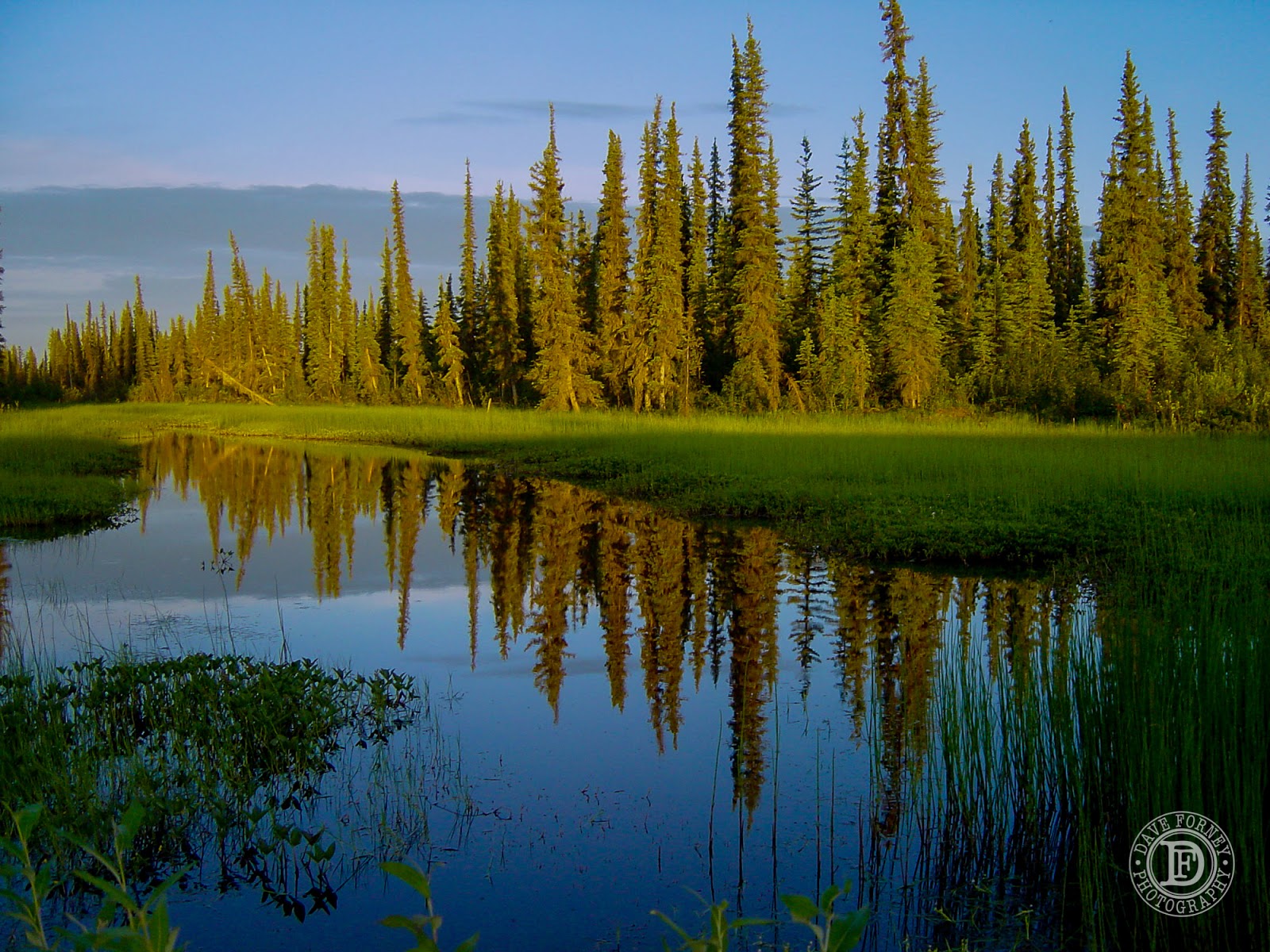 Next time I'll show you some of the subsistence-living shots... some of the hunting and fishing that we did to be able to eat and survive up there.
Posted by Dave at 9:28 PM No comments: