Here's a copy of our November News Letter.  If you want to see/download a pdf copy go here. If you're on our prayer letter e-mail list, then you should have already received a copy of this a few days ago.  If you get our letters via snail mail, then it should arrive sometime in the next week or so. 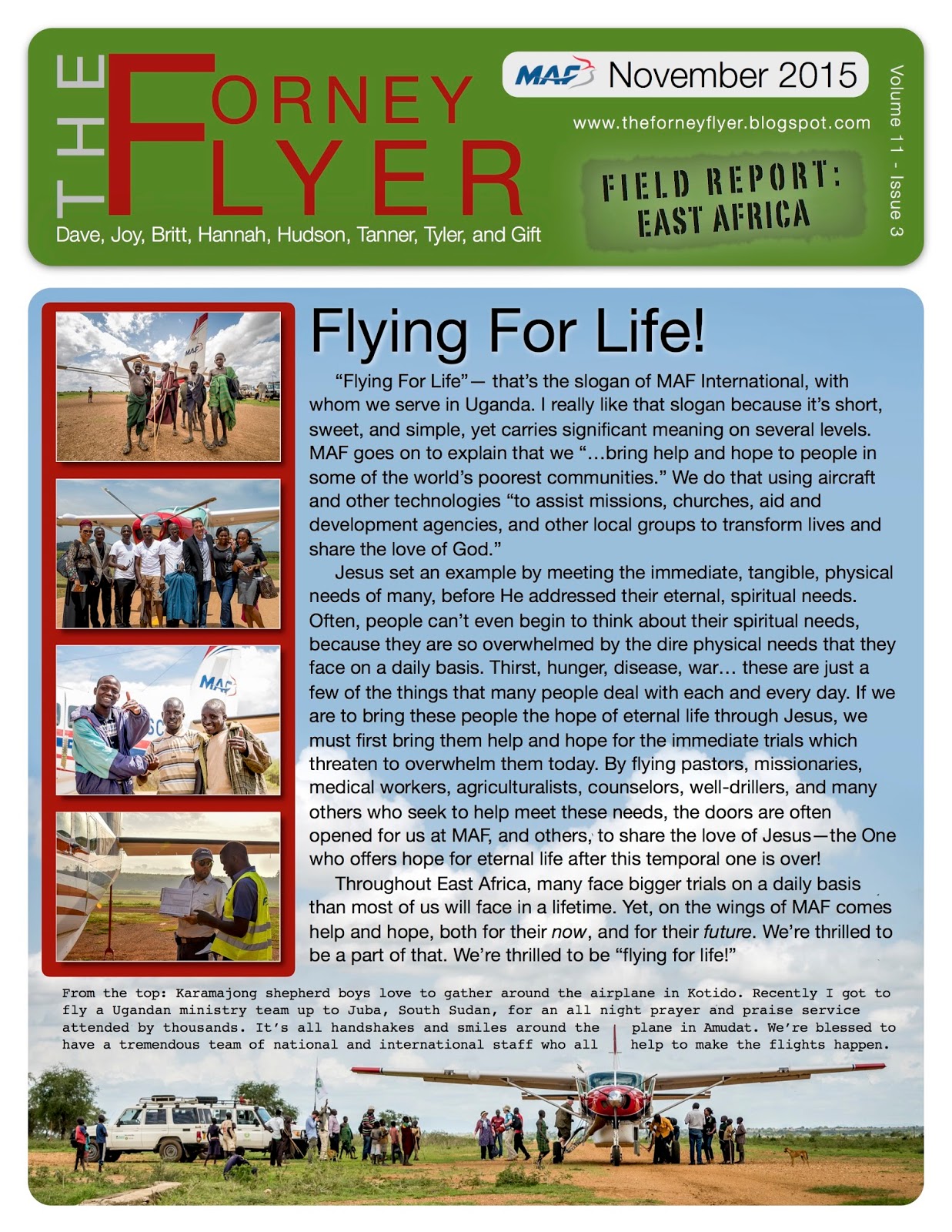 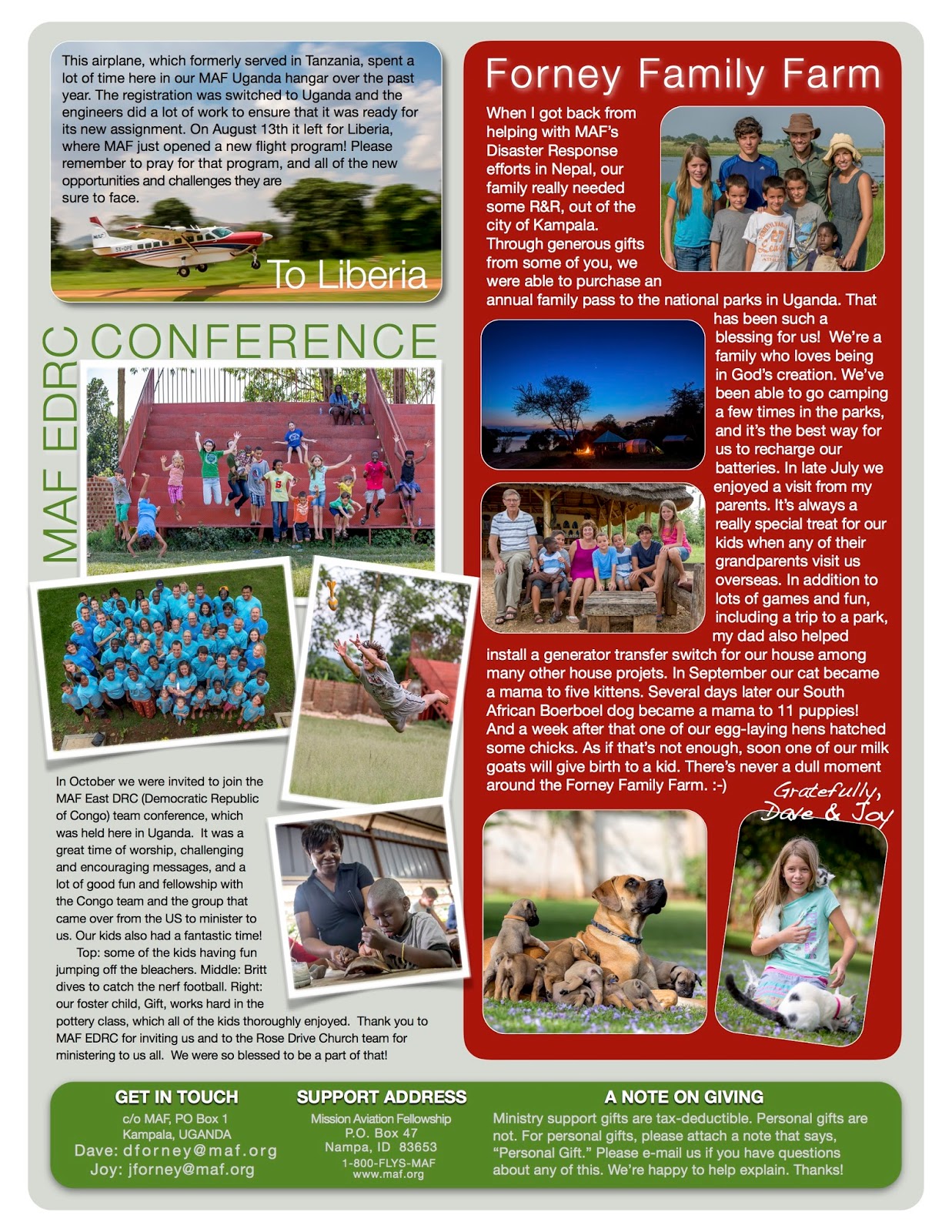 If you want to find out more about our ministry with MAF, and/or how you can be involved, please check out our MAF staff page.

Thank you for your generous ministry support and faithful prayers. We are so grateful for both!
Posted by Dave at 1:39 PM No comments:

You may be curious why the title of this post is "Rainy Season" and while this photo looks like the complete opposite.  Well, that's a good question.  The answer is that I have not taken a lot of pictures in/during the rains and this was an unusually beautiful day, so I was snapping away. 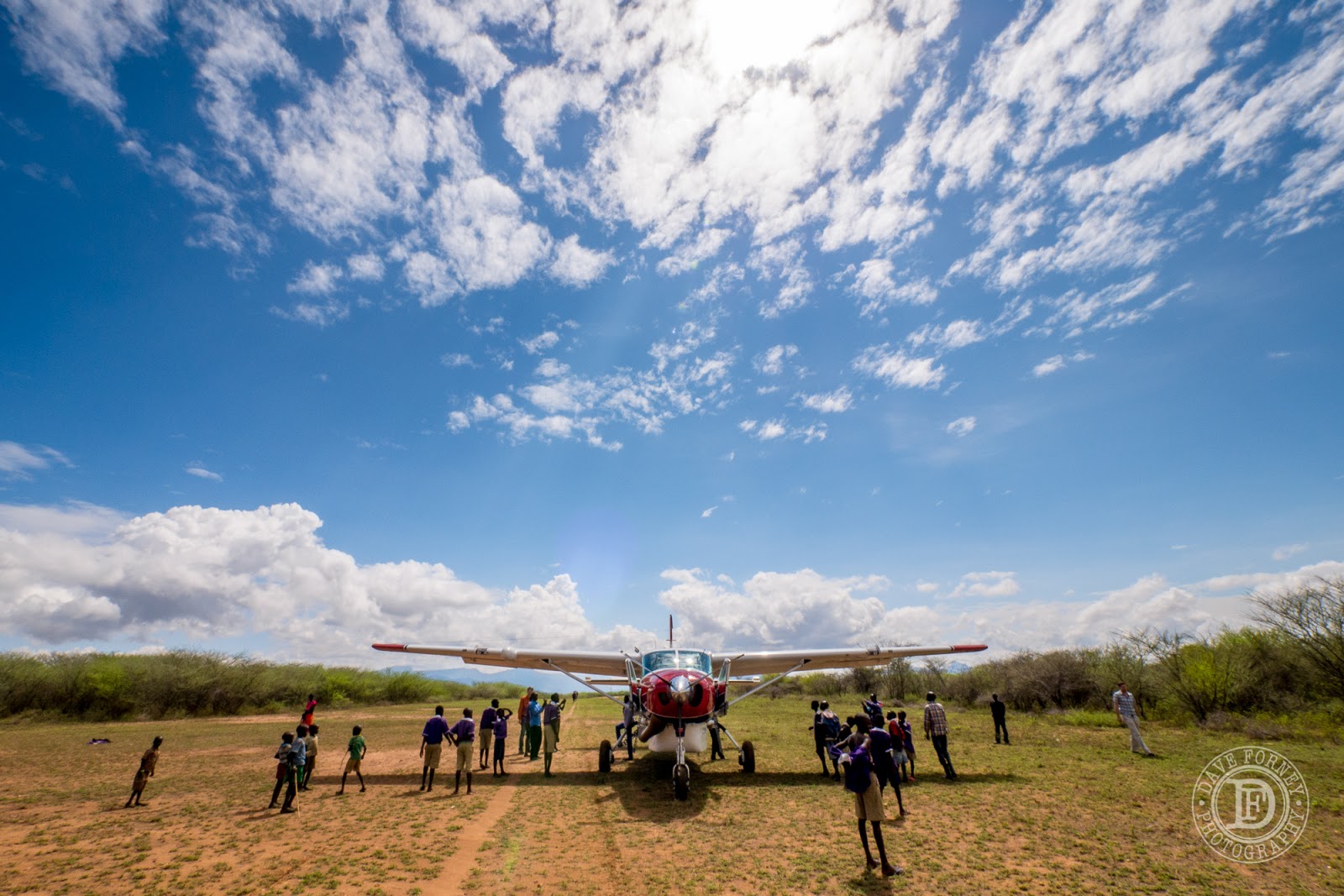 Another reason is that, when I'm the pilot who is actually flying,  (the PIC - Pilot In Command) I'm pretty busy just handling the loading/unloading of baggage, passengers, etc., and checking/preparing the aircraft for the next leg of the flight. I usually don't have a lot of time to be snapping photos.  But on this particular day I was riding along as a "supervisory pilot" for Andrew, below, who had recently completed a Cessna Caravan transition training course here.  He's been flying for MAF in Chad for a number of years, but on a different aircraft, the Diesel-conversion Cessna 182.  Now he'll be flying the Caravan there as well.  Upon completion of the initial Caravan training here, he then spent a few weeks flying operationally, to help solidify what he had learned.  This was one of those flights, and it afforded me the opportunity to take a few pictures here and there. 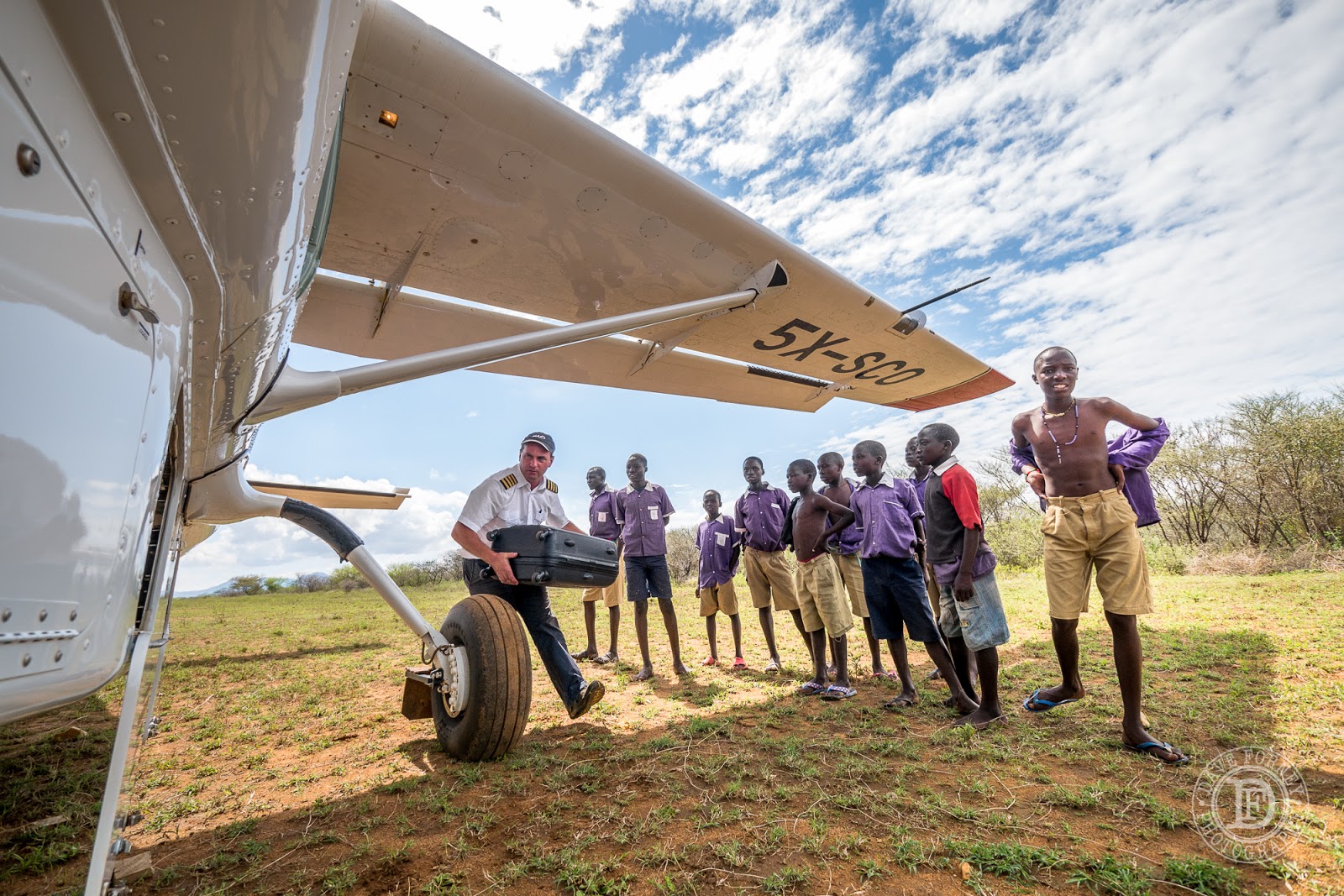 The kids are always happy to have their pictures taken. In fact, they usually ask me to take their pictures, by gesturing to the camera and pointing and smiling, since we don't speak a common language. 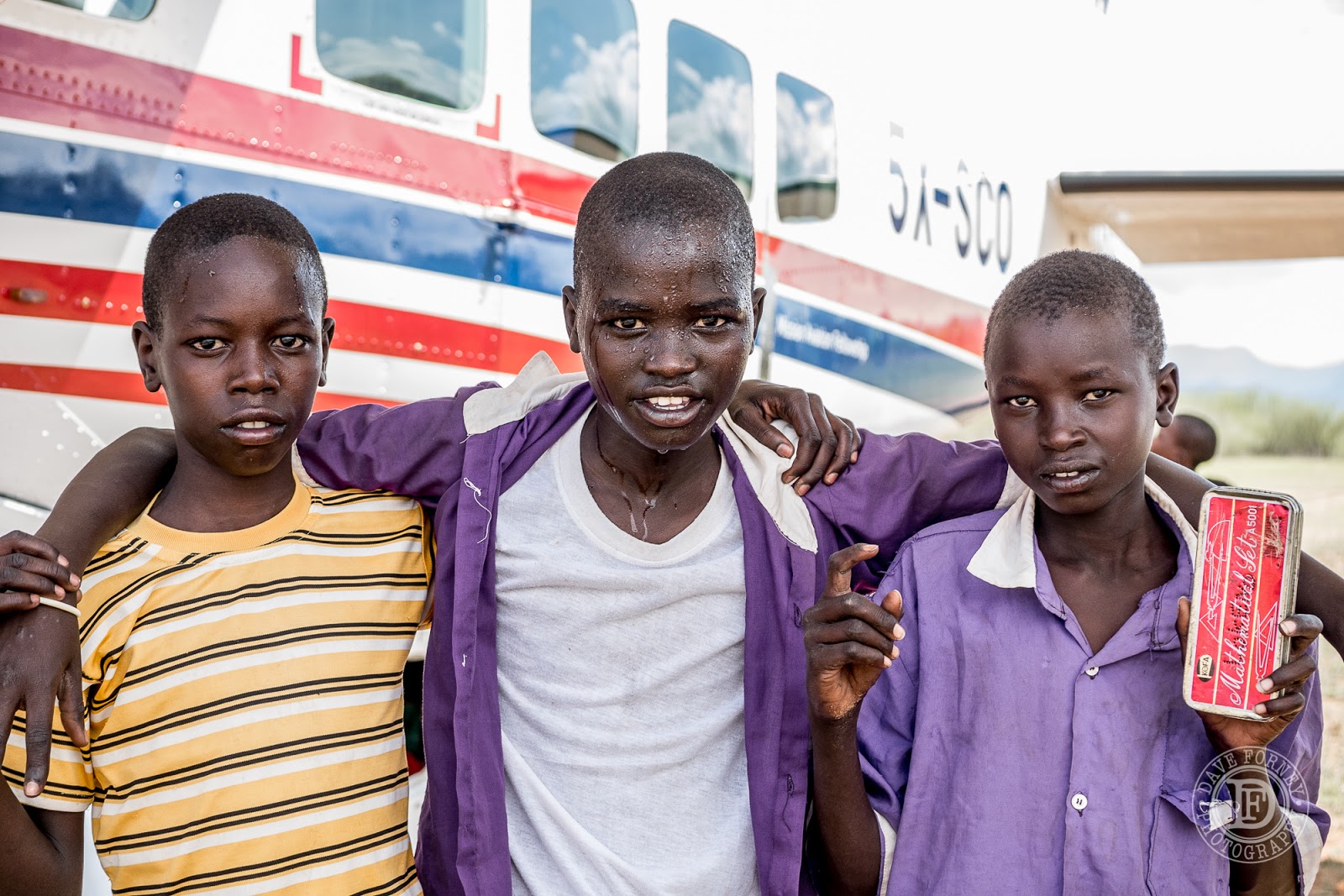 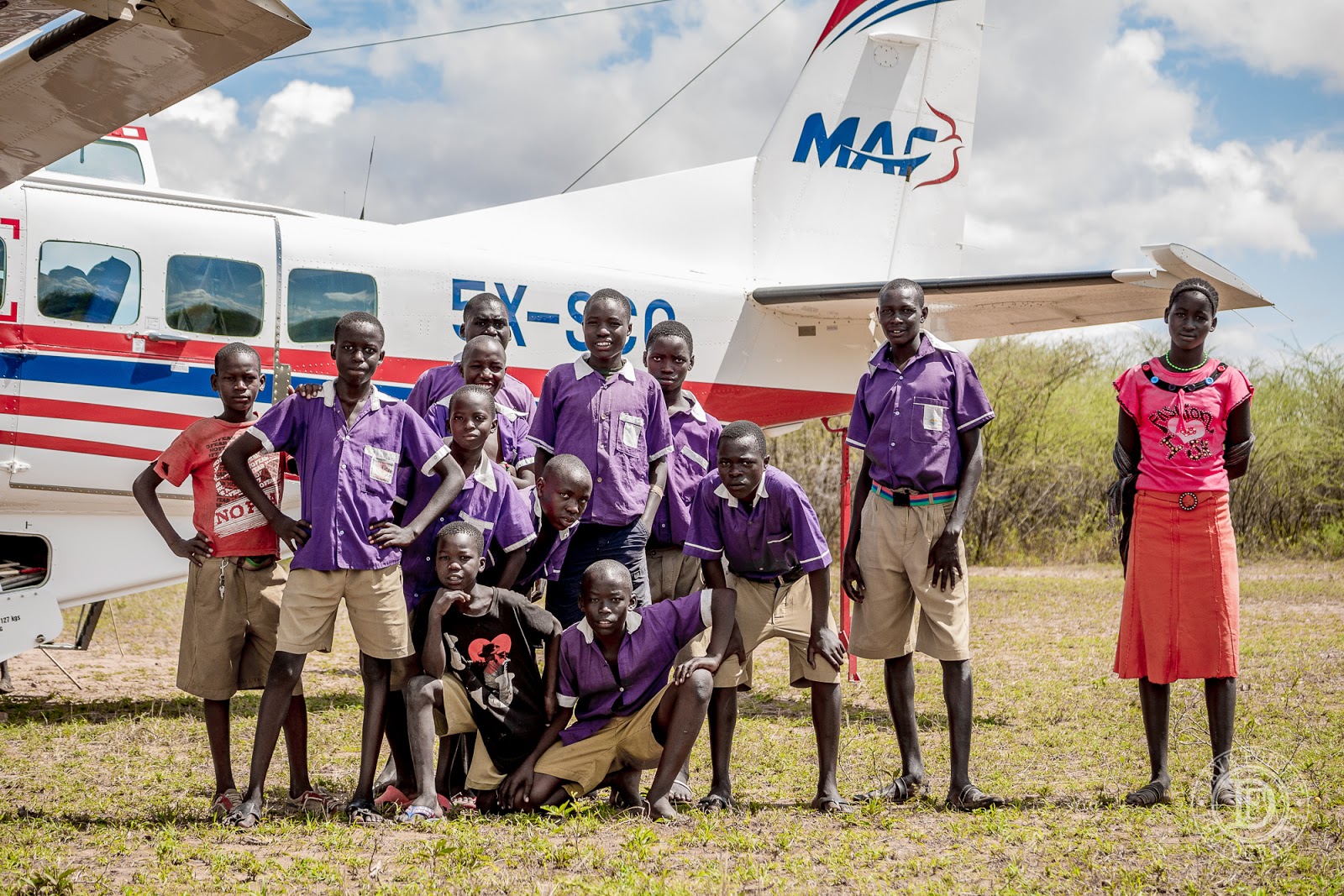 These were taken in Amudat, far Southeastern Uganda, just along the border with Kenya. 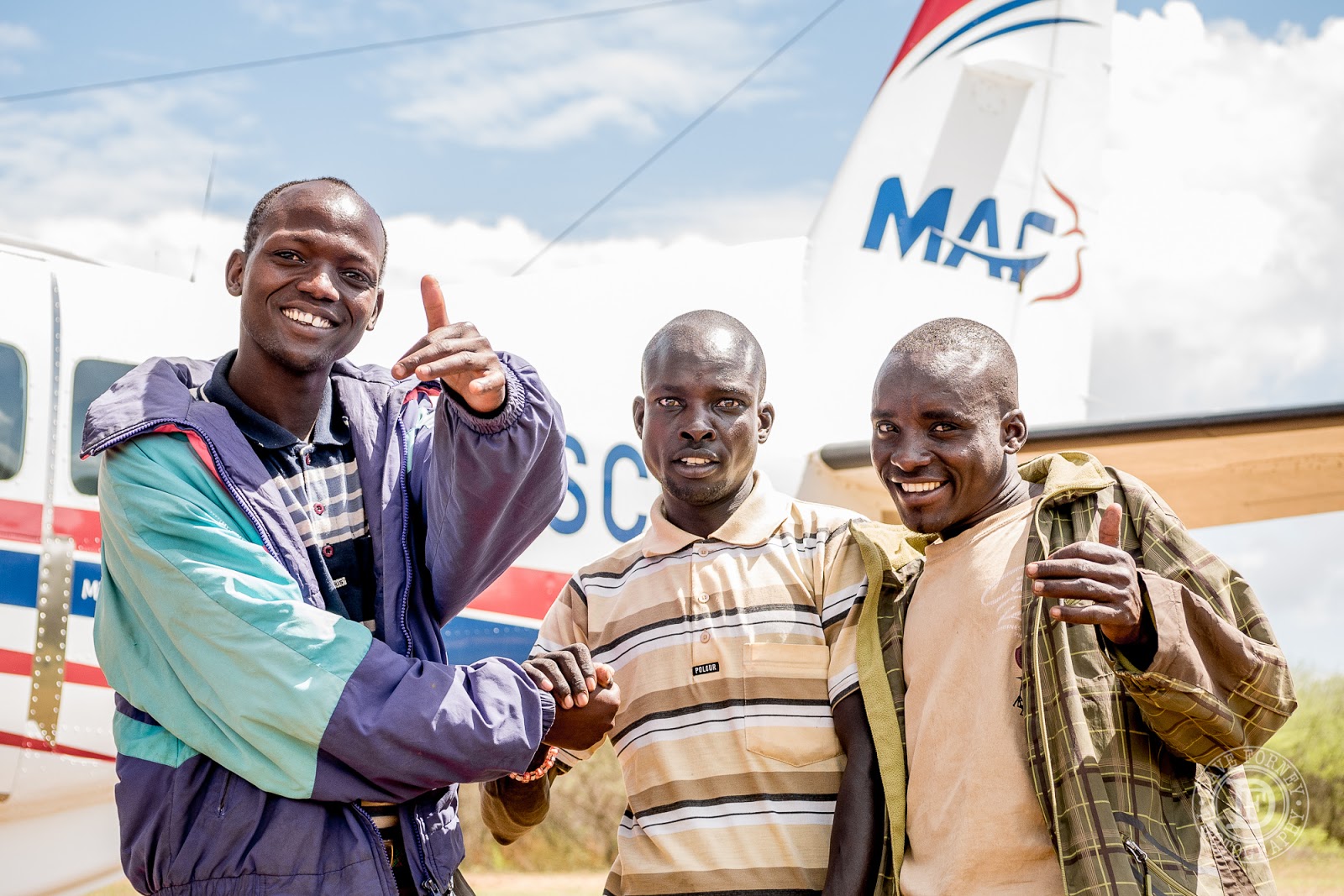 This one, below, was taken on the opposite side of the country. Actually, it's just across the border in East Democratic Republic of Congo (EDRC).  And THIS is a lot more typical of what the weather has looked like over the past six weeks or so.  There has been a TON of rain throughout this part of Africa.  It's nice for clearing the dust out of the sky, but it does make the flying a bit more challenging.  Even so, I love watching the big storms building and dissipating and it's nice to see everything green again. 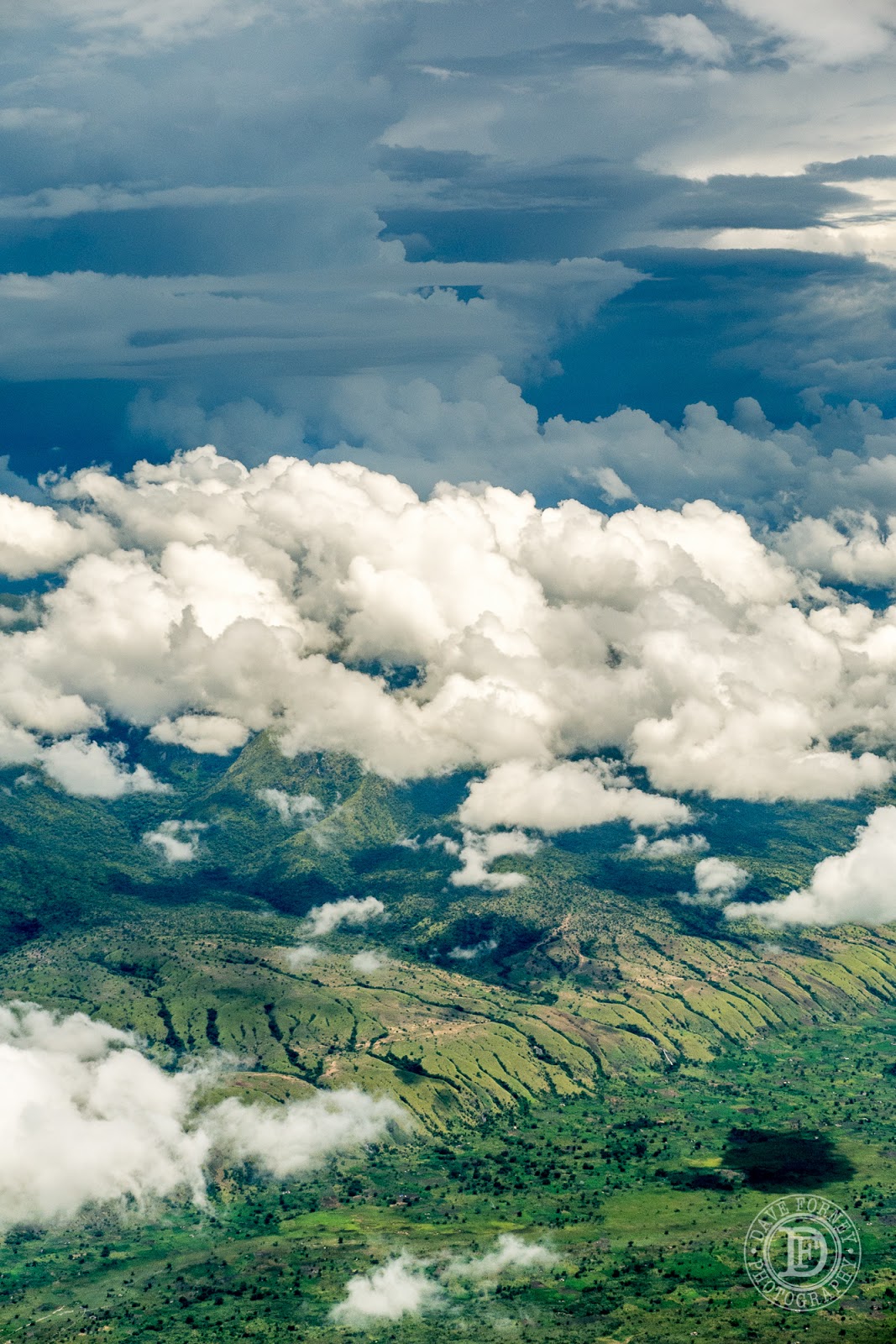 The ground is totally saturated here in the city, so every time it rains now the water just runs off and pools everywhere.  And because it tends to come in torrential downpours, it all happens very quickly. This has been a common scene in our yard lately--there's about two feet of water stuck at our back wall (the outlet drain holes are too small for the amount of water).  It forms sort of a moat around our goat shed.  Within a few hours it's all gone, and the ground is just squishy and wet.  Those are the milk goats we got this summer.  The white one is pregnant. After having a kid we plan to milk her. The brown one is still a bit too young, but when the time comes, we'll do the same with her. 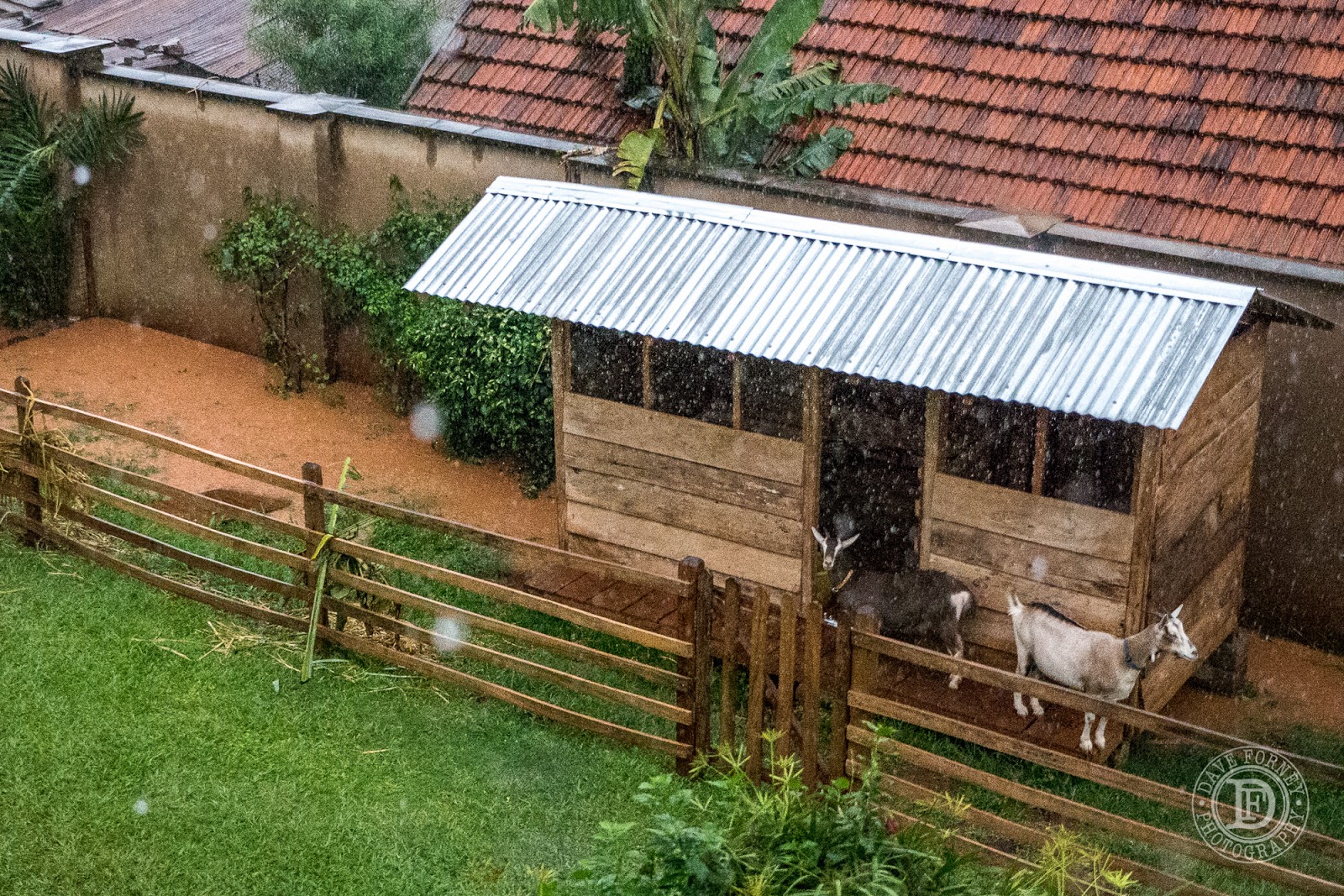 Speaking of rain... there's obviously no autumn/winter seasons here.  So each "autumn", rather than having a fall festival, like kids back in the U.S. might have, here the school has a "Rain Festival".  It's not a festival where they do some weird ritual and call for rain--no, that's not necessary. The rains are already falling heavily at this time of year.  It's simply called the Rain Festival because its the rainy season and they are having a festival.  Each class at the school goes all out decorating their rooms with in a theme related to what they're learning, and then they get all dressed up and have a parade.  There's food and games and all sorts of activities, and it's a chance for the parents and families to come visit the school and see what the kids are up to.  Our son's 9th grade class had just read Lord of the Flies, and they chose to go with that theme...which meant that Britt didn't really have to do anything different than normal for his costume.  Well, he did add some war paint and threw on an Indonesian pig tusk and carried a "pig" on a pole.  But still, we thought it was pretty funny that he was voted best-dressed boy in his class, when in fact his "costume" was basically nothing but a pair of shorts. Most days he goes to school with no shoes. No flip flops. Nothing but bare feet.  He is required to bring shoes for gym class, but otherwise the school does not require shoes.  That's one of the benefits of being an MK I guess. Just for the record, he does normally wear a shirt to school. Haha 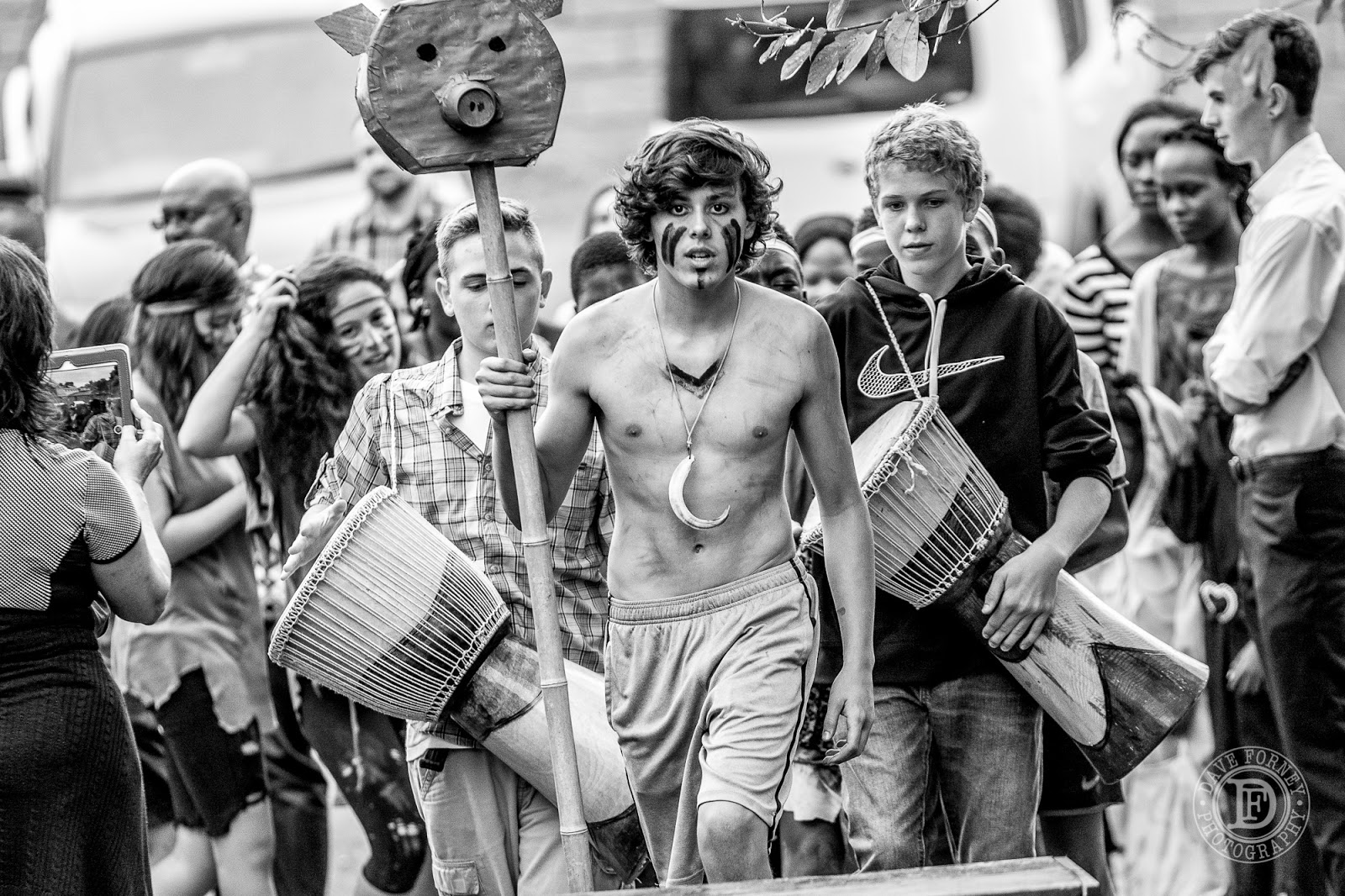