It's been a bit since I've had a moment to post something here. The last couple of weeks have been CRAZY busy, but I wanted to tell/show you a bit about our ministry trip interior last weekend. Over a year ago I got "adopted" into a family in the village of Long Rungan. They take it pretty seriously, and I wear a special beaded bracelet which signifies that I have family in the Krayan region. I'm surprised at the number of people I come across in town, that see the bracelet and ask how it is that I have family in there. They know what it means.

Well, for many, many months my "adopted" Bapak (Father) has been asking me to bring my family (wife and kids) into the village. So last weekend we finally got the chance to do it. 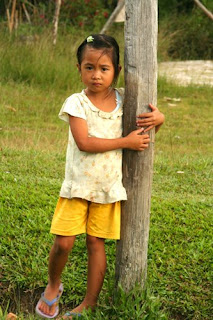 I've spent the night in 11 different villages now, and I've got to say that this was one of the best! Of course, we don't go in to have a "good time," we go in to encourage and minister to the people. However, what usually happens is that it's mutually encouraging. They often minister to us as well, and though we come home exhausted, it's also invigorating for the whole family. That was certainly the case this time! 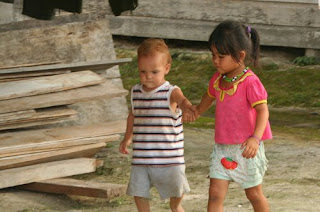 The fun thing about Rungan was the people. They are so warm and friendly and generous!!! I think we ate a meal just about every hour, as every family had to have their turn having the pilot and his wife and kids into their house for a meal. Seriously! We ate about 10 times while we were there! It was humbling, b/c these folks don't have much, and yet they essentially killed the "fattened calf" (or chicken in this case...and jungle deer, and wild pig...and you get the idea) on our behalf. Our kids had an absolute blast playing non-stop with the kids from Rungan. There may have been some cultural and language barriers, but an outside observer would have had trouble spotting that. From the moment we landed on the short, slippery patch of grass in the jungle, until the moment we left, our kids were running around, laughing, playing--just being kids with their new friends. It was great to see. Above, one of Tyler's MANY new friends is helping him find another ayam (chicken) to chase. Below, clad in his freshly-made, banana-leaf hat, Hudson chomps on oh-so-sweet sugar cane. The kids all got to try some during a hike through the jungle. 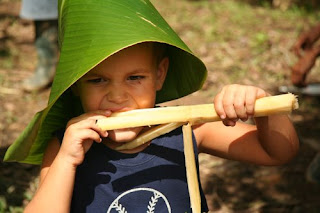 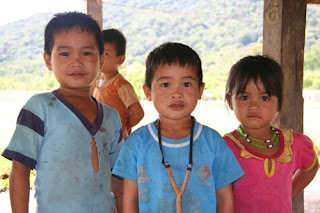 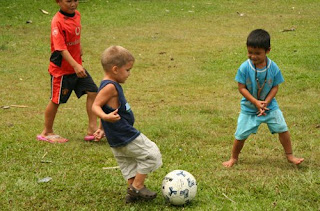 Each of these kids were so kind and generous with the little that they had. When we left, we gave them our soccer ball and Aerobe. They were overjoyed! Above, Hudson is playing soccer with his new buddies. Wish I could include audio with the picture. There were so many laughs, it was great!! Below, Hannah amuses herself with a live dragonfly on a piece of grass. Britton and Hudson found a myriad of strange and fun insects and animals. Although for Britton, the best ones were the bats that kept flying right through the partially built church during the film I showed. The high-intensity projector light drew in all the bugs, which in turn brought the bats. It was great entertainment for an eight year old boy. 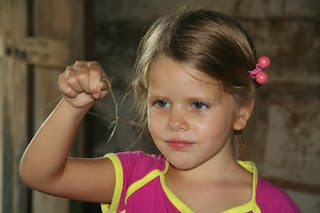 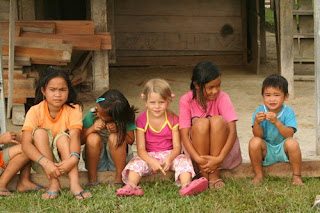 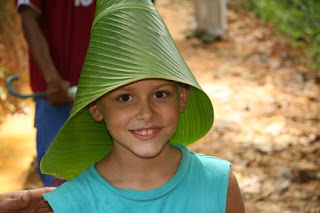 As usual, the evening revolved around the church service. This was the first time that anyone had ever shown a large film in Long Rungan. The people were very excited!! So sometime after dark the entire village showed up and we had a big church service. I had the opportunity to share as well as show a film. It was a fantastic service and a wonderful privilege. I really enjoy each chance I get to spend time with the people interior, outside of the busy flight schedule. And this time was no different! :) 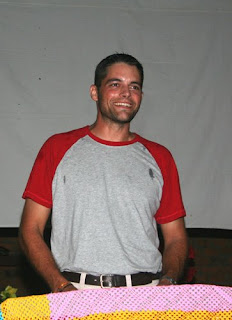 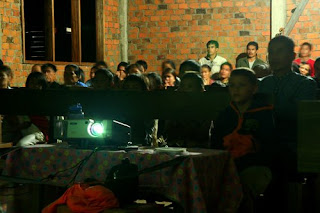 What a miracle, the same Holy Spirit that is alive and working here in snowy Willoughby, Ohio is actively working through your dear family in hot and sunny Long Rungan. Praising God for His faithfulness.

Thanks Dave for the fascinating and joyous report. Wow, what a ministry the Lord has given you, Joy, and your precious children. Great job bro!

Wow...it is always so amazing to read your blog Dave....we are so thankful to the Lord when we see how He is using you guys there in In. Wow....we are amazed. Thank you again for letting us in on your life in the Far East...we love you guys...

We had been praying for you all weekend and wondering how things went. It was so exciting to read your report and see all the wonderful pictures. How exciting to hear how the Lord is using you all. Trust no one got sick this time after you got home. We love you!

It was fantastic to read your blog and be encouraged. You're right - I bet the laughter of the children was music to the ears!

I came across your blog when I was Google-ing for Long Rungan. I was there about 2 weeks ago and feel in love with the warmth of the people there. The kids are just so open and adorable and I thoroughly enjoyed my time there.

Lovely pictures by the way.