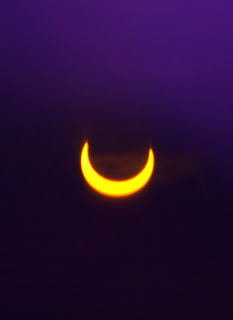 Yesterday afternoon we were treated to a rare phenomenon--a solar eclipse. It wasn't a total eclipse. It's what they call an annular eclipse. I believe I heard that about 91% of the sun was covered. Even though that's a lot of blocked sunlight, you still can't look at it with the naked eye. That would be a HUGE mistake! What's more, if you magnify it through a camera lens or binoculars or the like, the intense light from just a small percent of the sun can quickly heat up and crack the glass. Imagine what it does to your retinas??!! (Above is the last picture I took, just as the sun was setting and the eclipse was coming to an end. The crescent is obviously the sun, while the "hole" is from the moon that's between the sun and us.)

With that in mind, we were prepared with "Uncle" Robby's (our maintenance specialist's) welding mask. Yeah, he has a sense of humor. :) I wish I had a special solar filter for the camera, but alas, a poor man's solution was to shoot through the mask. We also took turns passing it around from kid to kid. (Below at left: Britton donned the mask with fellow MAFers Isaac and Alan watching. In the middle is Hudson and on the right is Hannah.) 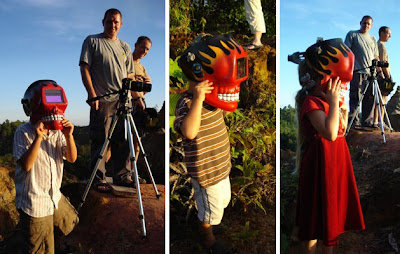 The best place in the world to view this eclipse was right here in Borneo. However, it was supposed to happen late in the afternoon and 9 out of 10 days the horizon is totally smashed with massive cumulus clouds at that time. But yesterday we were thrilled with the weather--it was a perfect afternoon/evening and quite an "event!" Here's a few shots I took. The first one is just as the moon is beginning to cover up the sun from the lower left. In the second and third it's progressing. 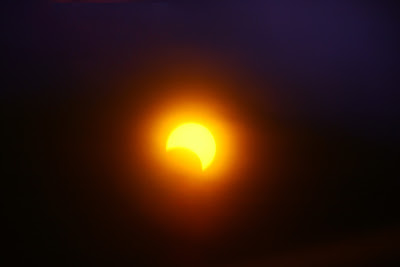 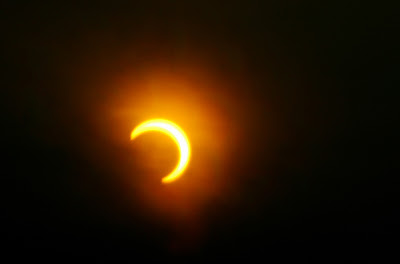 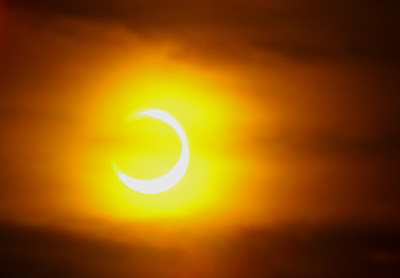 The picture below is what it looked like to the naked eye. We were perched on a little pinnacle, overlooking the island of Tarakan. The mainland of Borneo is visible just below the horizon. If you look closely you can see a reflection of the "crescent" sun in the camera lens, just below the actual sun. That was a mirror image of what you would have seen if you'd have looked through the welding mask. 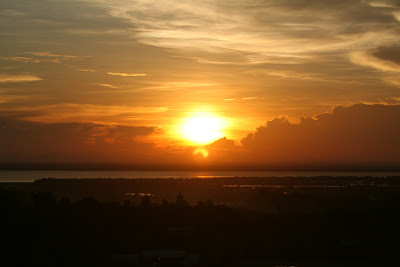 I'm not used to shooting through a grinning, fiery face mask. It was a bit awkward to say the least. I was told that I looked like a crazy (as in loony) puppeteer in the picture at right.

Just as we were leaving our perch, I spotted a beautiful pitcher plant in perfect light. You know what I always say..."The best light for shooting a pitcher plant is during a solar eclipse." Yeah, I waited my entire life for that moment! :) With that in mind, and my camera and tripod at hand, I snapped the shot below. The pitcher plant is a little marvel of God's creation. The plant feeds on flies and little insects. The "pitcher" fills partially with rain water, and then when the insects fall or climb inside they can't get back out and subsequently drown. The plant then "eats" them. Isn't that cool? 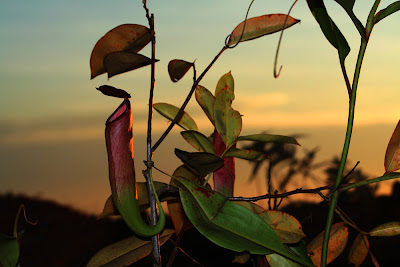 Wow. Absolutely amazing pictures (and the mask isn't bad either!)

very cool pictures! and the plant is Gods handy I agree!

Great pictures Dave! Thanks for always sending shots of Kalimantan and the family. It's great to see what you are seeing and experiencing.

This is professional documentation of a very rare event. And the picture of the plant is icing on the cake. Awesome

Glad to know I won't be the only nerd with a camera there! Nice work!