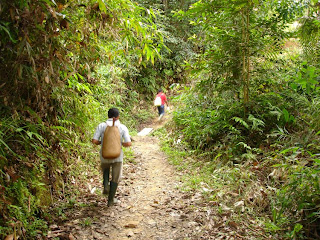 That's right, I got stuck again...but in a different way. For the first time since I've been here, I got "stuck" interior b/c of a mechanical issue. While doing a pre-takeoff check at a very marginal strip interior, I noticed that one of the engine's two magnetos had died. Since it was already mid-afternoon, I made the appropriate radio calls to folks at the hangar, and then secured the airplane and got ready for a night interior. It was a thirty minute walk from the airstrip to the village. (Above)

Along the way, I enjoyed the jungle scenery. These yellow, flowers are very common here. 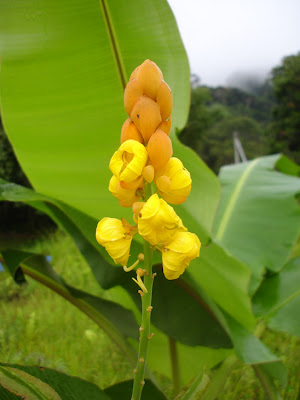 We passed by numerous rice fields that are almost ready to be cut. This is what the rice looks like on the "stock." 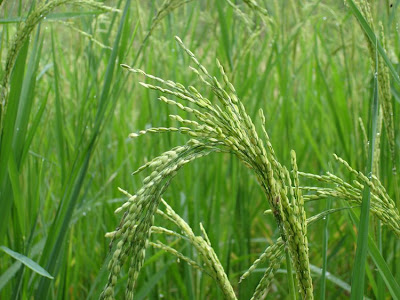 I really enjoy staying interior. However, to be honest I usually like to plan it in advance, rather than getting suddenly stuck like this. However, it was very humbling to see how totally excited my friends in the village were, that I was stuck with them. In fact, they didn't view it at all like I initially did. Rather than an inconvenience that the flight couldn't happen today, they viewed it as a blessing from God, that we had time to visit together. When I showed up unannounced at the pastor's house, he went nuts. "Duduk, duduk! Minum kopi dulu. Adu, Tuhan sudah memberkati kami sebab Captain Dave akan menginap di sini! Pujih Tuhan!" (Roughly translated: "Sit, sit! Drink coffee first. Wow, God has definitely blessed us because Dave is going to sleep here tonight! Praise God!") Seriously, he was that excited!

And thus began the marathon of visiting and drinking coffee, and eating, and visiting with others, and drinking and eating MORE, and then moving to another house again and visiting more while EATING and DRINKING EVEN MORE and ON and ON and ON and you get the idea!!! Yikes. I think I'd have had the same basic effect if I'd have been hooked up to several IVs pumping a solution of 50% sugar / 50% dark coffee straight into my veins. Wow! I was so incredibly tired by the end of the evening, yet my eyes seemed to be popping from my head, the result of caffeine and sugar saturated blood pulsing through my body. 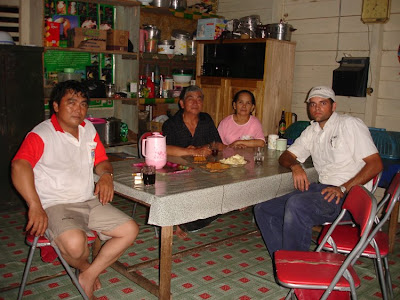 While walking from house to house, I took a few random shots like this one of a jungle armadillo skin hanging out on the front porch. Not only do they use the scales for various things, but they can also sell the skin to people in the city who make traditional medicine of it. 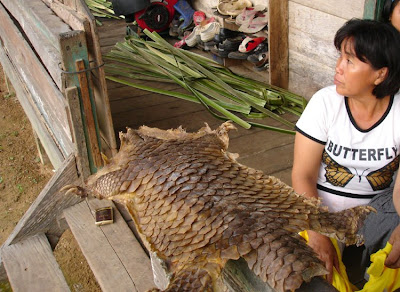 Kids love to have there picture taken and then see it on the camera. Even better, is when a few weeks later I bring them each a printed copy. It's likely the one and only image they will have of themselves, and obviously something they will treasure. 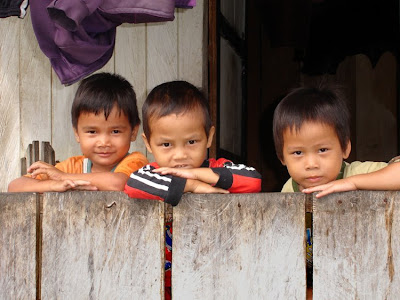 Well, after a not-to-restful night, I got up early to start working on the plane. I got it all opened up, and took the bad magneto off before Alan arrived in another plane with a new magneto and extra tools. (Below) 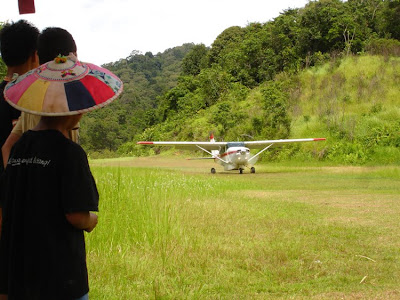 It's certainly easier to do this in a hangar, but things are often not ideal in the life and work of a missionary pilot. This is exactly why we have our maintenance licenses in addition to all the flight stuff. 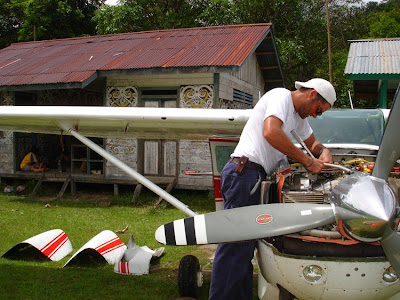 After what seemed like a very long time under the scorching tropical sun, I had the new mag installed, timed, torqued, and the engine closed back up. I did a run-up, then an RTS (Return to Service) flight, and then came back and re-inspected the new mag. Everything looked good, so finally, 24 hours after getting "stuck," I finally headed for home. 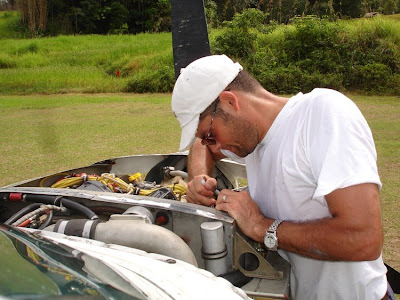 I didn't come home empty handed either. Remember that sleepless night? Well, just as the caffeine effects were starting to fade around 1:00 AM, my drooping eyelids were startled back open with the sound of screeching, buzzing and thumping just outside the window. For a fleeting second I thought maybe they were coming to eat the fattened pilot. But remembering that headhunting has been abandoned here for the past 50 years, I determined it must be something else. The epic battle taking place in the dark outside my window continued uninhibited for probably 15 minutes or more, ending only after the pastor got up and intervened. Apparently it ended in a draw--the large, black tomcat unable to capture and kill his prey, a giant cicada. However, the poor cicada got caught in a bag, and flown a hundred miles back to Tarakan, where it was befriended by my son, Britton, before being released back into the wild. 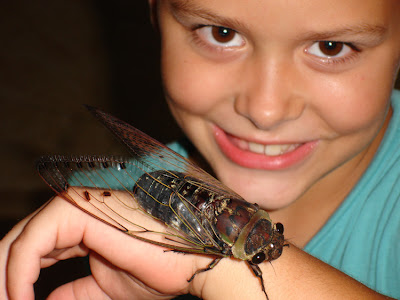 If you haven't caught on yet, there's never a dull moment around here!
Posted by Dave at 4:14 AM

Great story Dave! Enjoyed reading it and looking at the pictures. :)
~Jenn

You tell the best stories. I laughed out loud at the "fattened pilot" comment. Loved all the pictures, and stories that went with them. It's a good thing you were trained in the mechanical part of the plane--that was a smart move on MAF's part. Now I know why I pray for you.

I agree with Theda. Dave, you write the best stories. I enjoyed it! The pictures added so much to the story. Glad you are an excellent pilot and mechanic. I'm sure Joy and the kids were glad to see you back the next afternoon.

Dave,
Your life blows my mind. The divinely scheduled time with the pastor and his family and the rest of the village would make your buddy Walt smile.

Who needs Hollywood when we have Dave, from MAF. Many thanks for this post.

I really like reading about your adventures! Isn't it interesting to know that you can start off the day somewhat "normal" and then have God turn it from "normal" into something special!