New Years in the Villages

As I mentioned, we spent three days over New Years in two villages in the Krayan region of Kalimantan.  It's always fun to get the family out of Tarakan and into the country!  Below, some water buffalo wallow in the muddy water in the foreground, while beyond, rice fields stand ready for harvest. 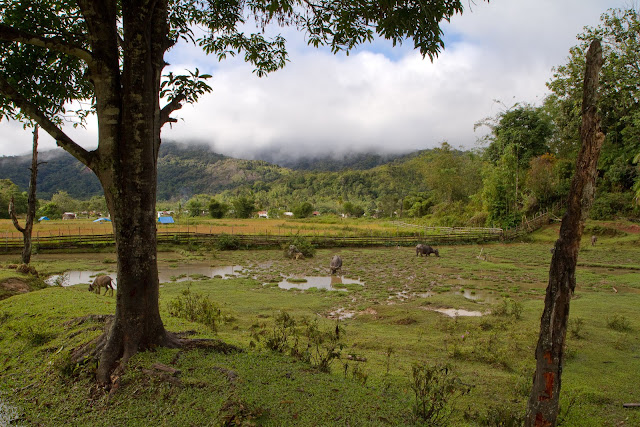 On New Years Eve we went into the village of PaUpan (below).  There were three families and a single guy that made up our little (actually rather large) MAF team this time.  We took two airplanes, a Cessna Turbo 206 and the Grand Caravan. 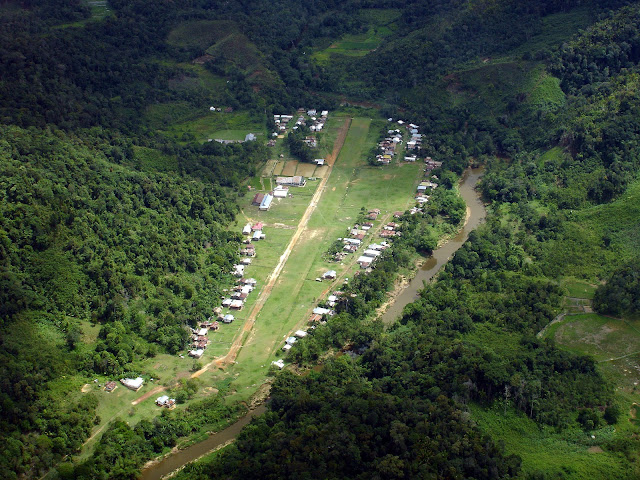 The next day we flew over to Buduk Kubul (pictured below, but on a different occasion).  The Caravan can not land here--it's way to short and marginal, so I had to fly my family there and drop them off in the 206, and then make two shuttle runs to Long Bawan where they parked the caravan, (five minutes away by air) to bring the rest of the MAF folks into the village. This time I brought my RC airplane along.  It was a HUGE hit with everyone.  They've never seen anything like it...an airplane flying aerobatics and doing wild landings--even crash-landings.   We even had a little guy with a parachute that I could drop from way up above.  It's a good thing I don't fly the real plane like I fly this one.  But the kids absolutely loved it!  All the parents and older folks were also watching from their houses.  It was a lot of fun! 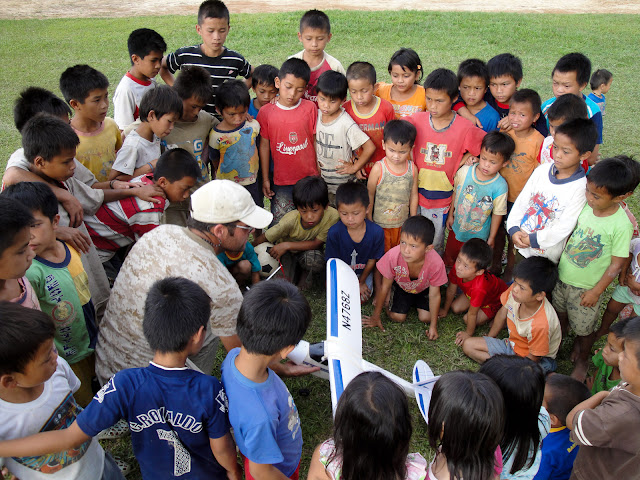 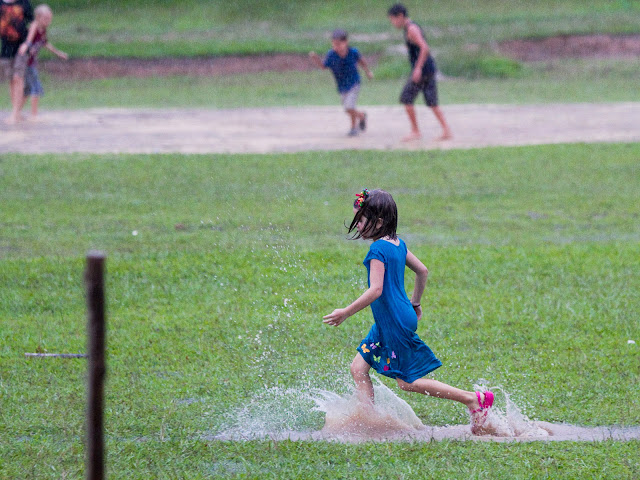 Of course, there's no running water in the villages...well, let me say that differently.  There is water continually running from the mountain springs (freezing cold) that fills buckets or drums--but it's not what we would define as "running water".  To get all that mud off, you simply use the dipper and dump it all over yourself.  It's seriously freezing cold--especially for the kiddos.  They're used to the hot temperatures and warm water in Tarakan, but this is up in the mountains where it's a lot cooler.  It feels like ice water! 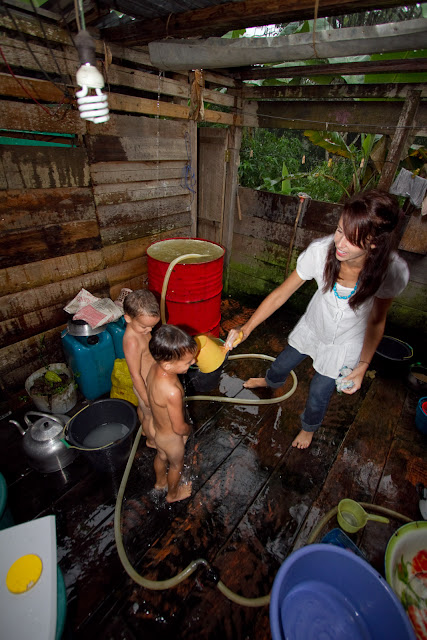 One of the things we seemingly do non-stop in the villages is EAT!  These dear people have so little and yet give so generously.  They never just put out one or two bowls or plates of anything.  It's always laid out in a big spread, and we always seem to gain a few pounds while we're there.  Here, Hannah was hanging out with the Ibus in the kitchen where they were cooking.  They can't seem to get enough of her. 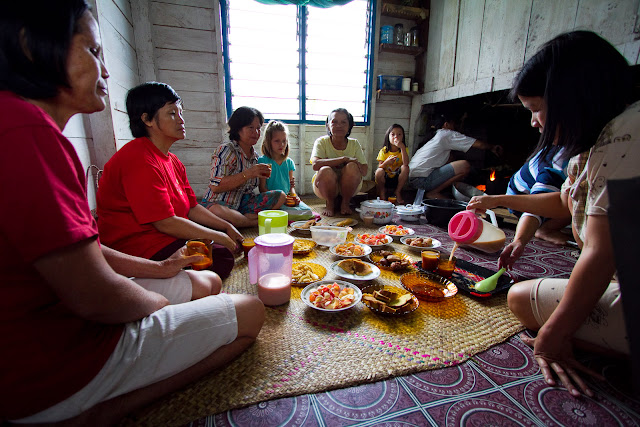 And this is how they cook.  Everything is prepared over fires, on baked-clay ovens that they make themselves.  It's amazing how much work it is, but they're so good at it! 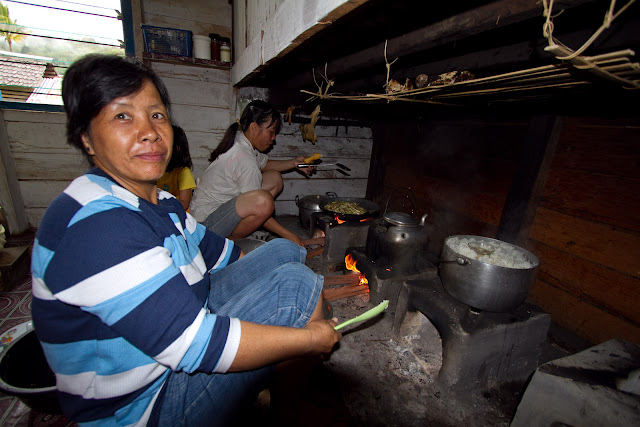 Of course, one of the main reasons we went in there was to encourage the Indonesian pastors and the folks in the local village church in each location.  They had multiple church services in each village to maximize the opportunities to have the MAF pilots be involved.  Unfortunately, my video projector went belly-up after seven years of use, flying around the world three times, being driven around the U.S over a combined nearly 20,000 miles, and going into numerous jungle villages in Borneo (I guess it did pretty well considering.)  But I was able to borrow a projector so I could show films in the evenings.  That is always a HUGE event, with everyone in the village showing up--and a great opportunity for me to share some words.

Joy and the other two wives did a Sunday School class with all the kids in Buduk Kubul on Sunday morning (the parachute is part of that), and then our program manager preached in the morning service.  Afterwards, they killed yet another pig and gave each of us a HUGE slab of solid pig fat--the "best" part, in a show of appreciation. 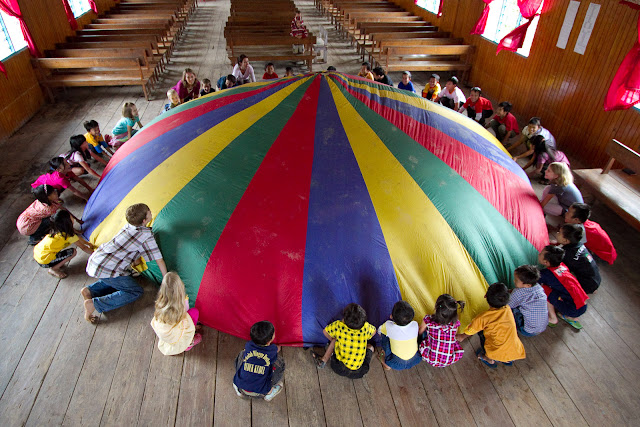 Did I mention it was cold?  I haven't seen long sleeves or pants on any of my kids since we left the U.S. to return here a year ago.  But Tanner and Tyler were freezing (to keep it in perspective, we're talking temperatures probably in the 60's and 70's--maybe not cold to you, but...) so they were loving the little hooded sweatshirts we almost left in America. 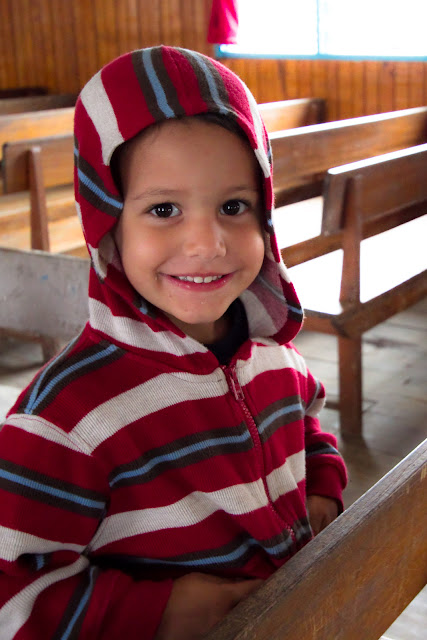 As usual, it was an overwhelming and exhausting time, but very good all the same.  The people are so appreciative of the ministry of MAF, and absolutely love it when we take the time to come in and stay with them overnight.  We usually talk and eat and drink and have church services seemingly non-stop, but it's a huge encouragement to the local pastors and their families and the communities.

The airstrip in Buduk Kubul (below) is very scenic.  But it can also be quite intimidating on landing.  It goes straight into the face of a steep mountain.  Behind the one that you can see below, is another one that rises several thousand feet.  When you're out there on mid-final, you're committed to land, b/c there's no way you could turn or climb to avoid the mountains.  And as you can see, they have a lot of water buffalo roaming around there. 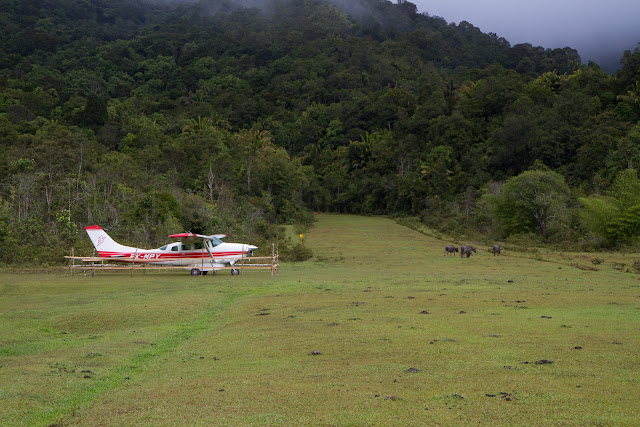 Finally, here's a picture of the rice, ready to harvest in Buduk Kubul.  They're known for having some of the best rice in Asia--probably the world.  And I just thought you might like to see what it looks like right before it's cut.  Can you find the grasshopper-looking bug thing? 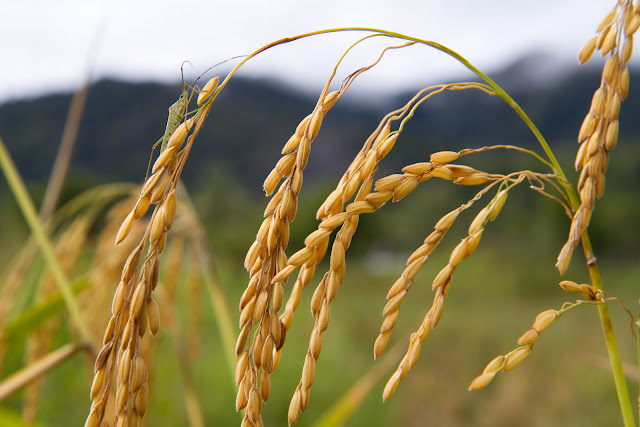 This week, among MANY other things, I also flew 400 baby chickens to a far-away village as a future meat source, four different national pastors to locations of their ministry, a government entourage campaigning for an upcoming election, numerous school children of all ages from their home villages to larger villages that have a school, and six medevac patients.  Twice this week I had to pick up two patients in the same load, because no one else was available to fly and they were too critical to wait for me to return (we have a lot of planes down for maintenance right now.)

For example, yesterday I had two young men, both laying down in the plane, very week and unable to walk, both with IV's, and each one had a family member along.  It was a full planeload!  All of these medical flights were critical, with some being the result of motorcycle accidents, another the result of continual bleeding from the mouth and nose for four days, another suffering from severe, unknown stomach issues, and on and on.  Without MAF, most of these patients probably would have died!  Right now, they're all being treated in the Tarakan hospital, and at least stand a good chance of recovering.  Isn't it awesome to be a part of something like this?!

What an amazing ministry opportunity! Enjoyed your pictures, as usual. How can I pray for you and your family as you serve the Lord?

Awesome!
So good to read your posts...

Awesome post and photos! Always love reading your blog! I am a follower of your wife's. :)

Sweet! Funny about the hoodies! (They are so cute, BTW) Glad y'all are having good times!

Those kind of trips makes one think, and reflect on a few things:

1. The water may be cold, but it's SPRING water. No chemicals, no clorox. Pure, just like the pioneers used to use.

2. The inhabitants' hospitality is one we can all learn from. It's not how much you have, but how much you give. Not what you own, but how you make the most of what comes your way. Not complaining, but thanking God for life.

3. Kids don't need much to have fun-- playing in the rain is a nice CLEAN diversion.

We can all count our blessings