Here's the third and final installment on the trek from the upper Iwan River to the Upper Pujungan River.
Still about six days from our destination, this is where we stopped to camp one evening along the rocky banks of the upper Pujungan river.  It was beautiful to catch glimpses of the sky now and then, but the going was very, very tough along the extremely steep and slippery rock banks (cliffs at times) of the river. 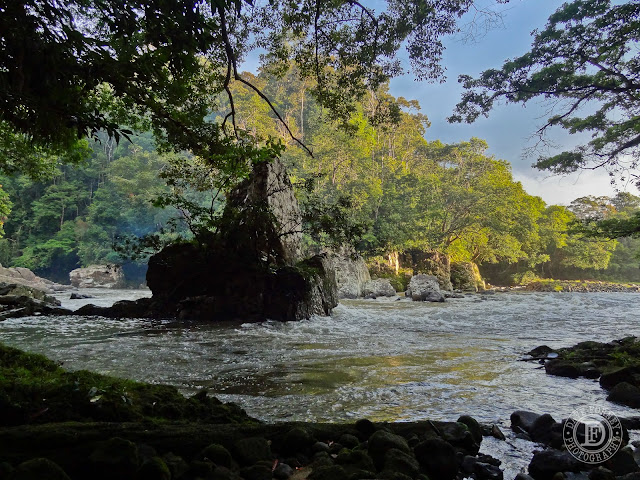 Another shot along a different part of a river.  It all blends together in my mind after 14 days out there, but our camp was just off to the left, just out of the shot. 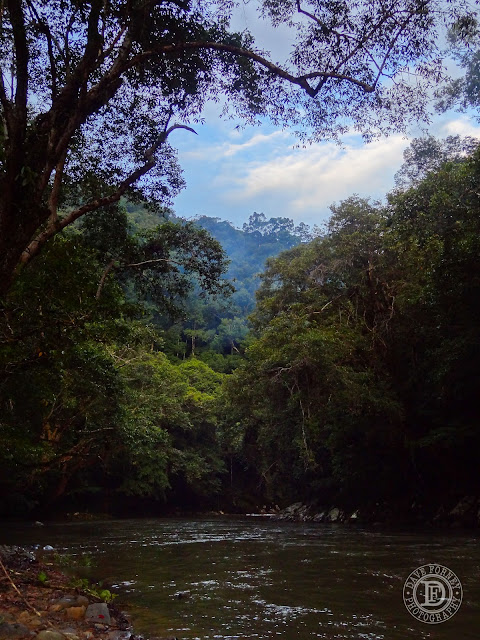 This group photo, taken about 10 days into the hike, might adequately show how tired we are, but it does not do justice to the power of the river.  It was literally roaring at this point--pounding and grinding against the rocks so that you could barely hear the person next to you when they were yelling. 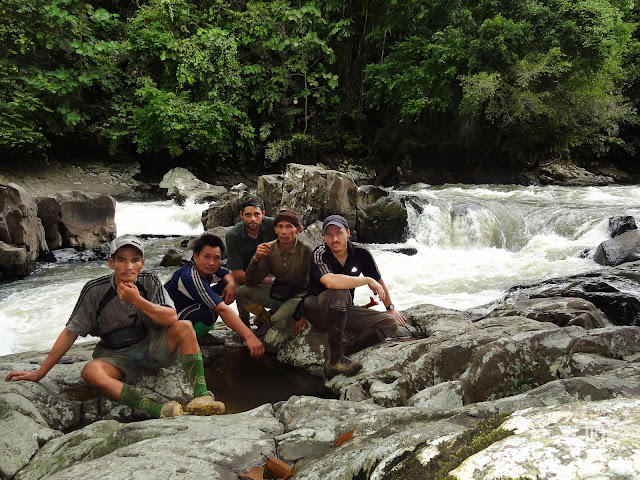 Most of the time we were picking our way along the jagged, steep slopes--often climbing hundreds of feet up to traverse a vertical rock overhang, and then back down again.  At times we would walk for hours, only inching forward at a pace of a mile and a half per day.  But once in a while we'd catch a break and find a rocky "beach" along our side of the river.  Then we could hop along the rocks, enjoying an easy pace, even if it was only a few hundred feet long. 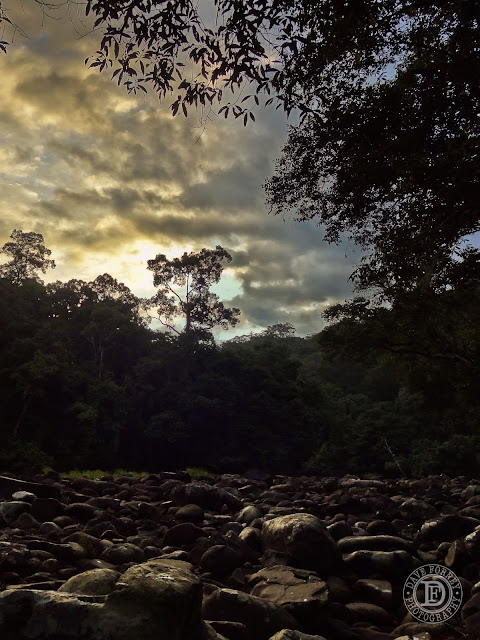 The jungle took it's toll on us.  Paul and I both lost a noticeable amount of weight, if not from the prolific sweating, exertion, and dwindling rations, then certainly from the copious volume of blood we were donating to the army of leaches and other biting insects.  And then there was the beard.  With a backpack already approaching 50 pounds, a razor just doesn't make the list of "required" items.  Besides, my kids always love the "new look" upon my return, and the glorious shaving-it-off ritual, where I create all kinds of wild and weird new looks, however short lived.  My wife?  Um, yeah, she's not so fond of that. 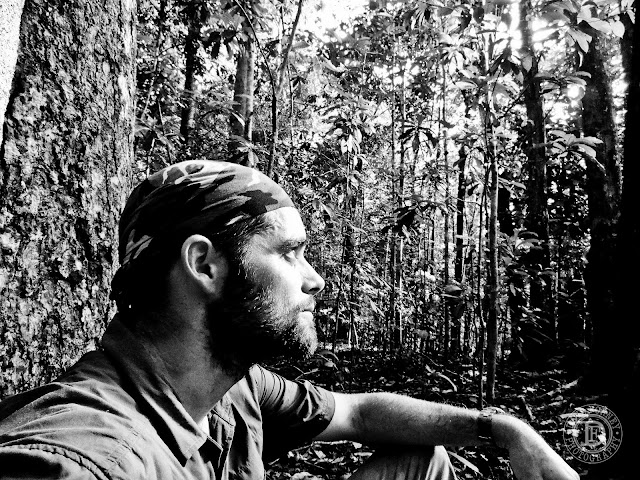 Here's a shot of one of our campsites.  In the foreground, my Hennessy hammock--a great way to sleep in the jungle!  In the background, the shelter for our guides, and our cooking fire.  Pauls hammock was just out of the shot to the right.  And yes, the tree in the foreground really is as big as it appears to be! 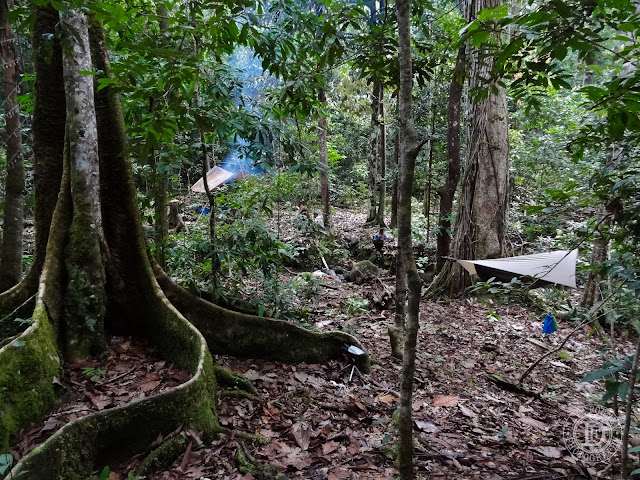 Our trip took 14 full days from the time we left Tarakan early on a Friday morning, until we returned two weeks later after dark.  The first and last day involved lots of boat travel.  Without the boats the trip (one way only) would have taken up to two months or more!  During the 12 days of hiking in the middle we walked a total of nearly 65 miles (104km), though if you look at our track on the GPS, we were winding all over the place like a lost snake.  Our straight-line distance was about half of our total distance.  But by MAF airplane, we could have flown what we hiked (from the starting point tot he finishing point) in about 10 minutes, less than one minute by air for every day that we hiked.  Over the course of our trek we ascended many mountains--a total vertical ascent of almost 19,000 feet--significantly more than the vertical ascent required to climb Mt. Everest from base camp.   It was grueling and exhausting!!--a great reminder of why MAF is out here! 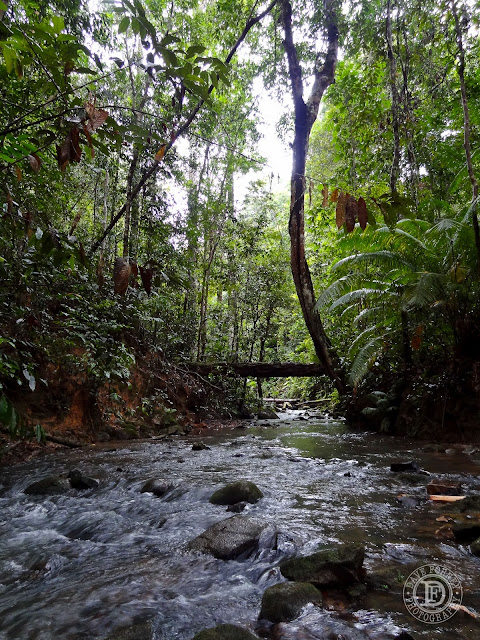 On the last day of hiking we finally left the edge of the river near Long Saan, an old abandoned village sight, and climbed up into higher elevations where we broke out into open areas with expansive views.   The scenery was gorgeous!  It looks like this would really be easy hiking hugh? Well, think again.  The ferns are about eight feet tall and thicker than flies on manure!  Trying to cut a trail with a machete (or parang) is all but pointless.  Instead, our guides cut a pole about two meters long for a "pusher".  The lead guy would place it up at a 45 degree angle onto the ferns in front of him, and then basically walk up the pole, thereby pushing the ferns down under it.  The rest of us would follow, enveloped in a cloud of fern dust.  But hey, at least we weren't fighting for a a foot or handhold on the edge of a slippery, plunging precipice.  AND, we enjoyed the sunshine. 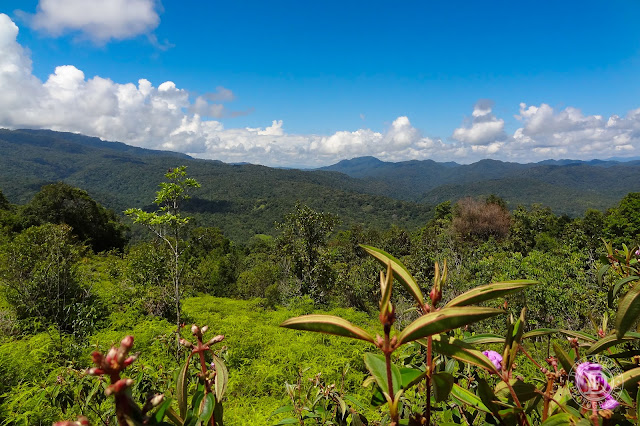 The Long Saan area was some of the most intriguing and beautiful jungle of our entire trek.  We saw animals all over the place--lots of pigs, deer, payau, monkeys, hornbills and other birds.  It was a really beautiful area!  There were waterfalls and babbling brooks.  We entered an area where the canopy was high but the undergrowth was thin.  You could actually see for hundreds of feet in every direction down on the trails, which was very strange after so many days of hacking through thick bush.  Below is a shot of the old cemetery in long Saan.  We took a "tour" through the old village sight, now overtaken by jungle--a surreal and fascinating place.  We were most excited that for the first time in 13 days, our guides knew exactly where they were and we were on an actual trail--albeit an old one. 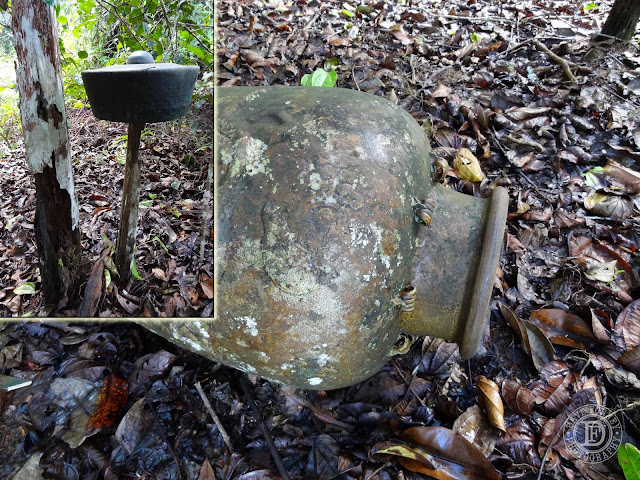 After several hours descending back down to the Pujungan river, we still had another day of hiking to get to Long Jelet.  But out of nowhere a motorized canoe showed up.  We were at the very point that is considered the furthest spot upriver that is navigable by boat.  From that point on up, it's violent whitewater.  A couple of young guys had brought a boat up from Long Pujungan to do some pig hunting.  They didn't even know that we were there.  We talked them into taking us the rest of the way to Long Jelet by river, which saved us at least a whole day in the end.  We could only take two guys at a time, because the river is still totally crazy in these areas--as in, lots of intense whitewater.  I only pulled my camera out once, on a nice lazy stretch, to grab this shot of Pak Lajau driving the ketinting downriver to Long Jelet.  It was a great feeling seeing all the jungle and rocks go zipping by at such a fast speed! 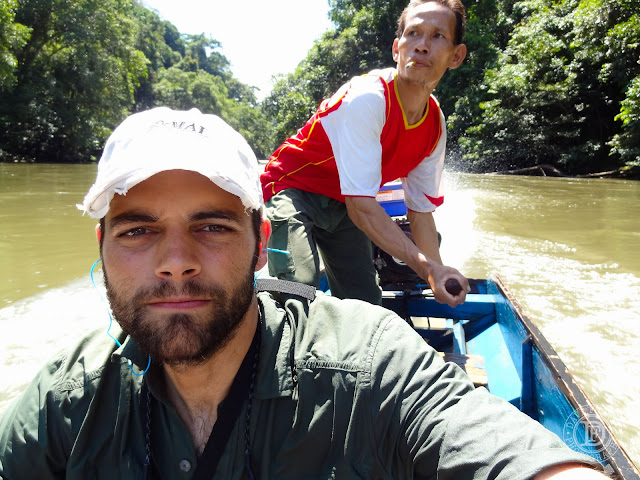 We made it all the way to Long Pujungan before dark, by river of course.  Although there is an MAF airstrip in Long Pujungan, we would have needed to wait two days to get picked up by air. for what  would have been a comfortable flight to Tarakan.  However, we opted instead to take a "longboat" the very next morning, and go all the way out to the coast by river.  That was indeed quite an experience!  Over 40 of us crammed into what is essentially a gigantic wooden boat in the shape of an enormous canoe, with four outboard motors on it!!  Then we took off down the swollen river, many time facing waves and whitewater that towered high above the boat.  The scenery was amazing, the ride was thrilling, but mostly we were just glad to be nearly home. 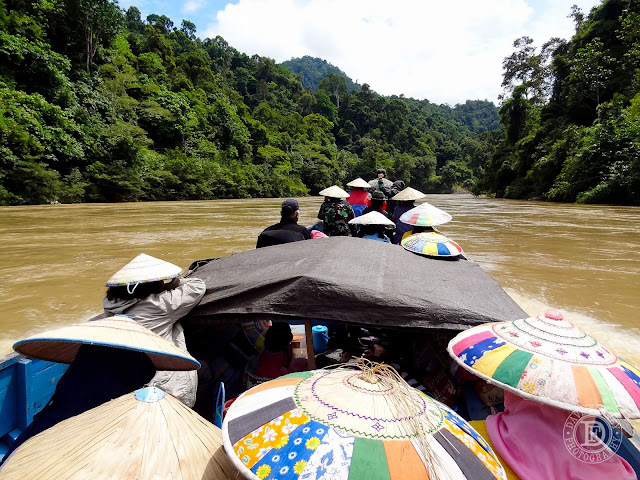 Just before dark we made it to Tanjung Selor and caught another boat (this time a speed boat) to Tarakan, one more hour up the ocean.  After catching some motorcycle taxis home, we surprised our families by simply walking in the front door--five days past when we were originally due, but two days before they were expecting us based on the last word they had heard.  All in all it was an amazing experience, and one that I will never forget.  But had I known what we were getting into this time, I probably would have picked a different route.  As it turns out, trekking through uncharted territory in virgin jungle is much, much harder than simply flying over it!!!

What is a payau? I googled it, and got a couple pics of a deer, some other random pics, but nothing in English.

Glad ya'll made it back half alive, at least! Did you have any sort of communication with your families?
Altogether an incredible journey!!

"a great reminder of why MAF is out here!"

A payau is a type of large deer, between the size of a mule deer and elk. We did have a satellite phone with us this time. However it was impossible to get a signal for the first week or so, basically anytime we were under the canopy. We made one call to our families from the phone, about a week into the trip when we knew that we would be waaaay behind schedule. After that they never heard from us again until we showed up at the house. :)

Thanks for posting about your amazing trip. My wife and I have thoroughly enjoyed the pictures and description of your adventure. Keep up the good work and keep the posts coming. We look forward to each one.

I am going to post a link to these posts on our blog. Be prepared for "millions" of visitors by the end of the week. Lol

Thanks so much for sharing Dave. We are missionaries in Paraguay with SIM. We have a blog @ houghslife.blogspot.com and my wife has also enjoyed what your wife has written in the past. I may have missed it in your 3 posts but what was your reason for setting out on this amazing/crazy journey?

Hi Dave , great blog and commentry on life in Kaltim - brings back many good memories having made several wild treks into the Apo Kayan(MAF from Samarinda),upper Bahau and Sarawak in early 90's- inspired by Eric Hansen's Stranger in the Forest book of his journey with Punan guides from Marudi all the way thru to Mahak Baru in '82- a great read! The reality of what is and still happenning re the destruction of the Borneo rainforest(thankfully KM reserve created)is still deeply saddenning- My only critisism is that this reality is not reflected in your blog but i appreciate your and MAF's position- anyway will maybe be back there next year to revisit, best wishes from Neil Melbourne Australia

Thanks a lot for this awesome sharing. Your information enchanted me and this will definitely be helpful for other people who are searching such information. Thanks again.

Wow, what an adventure! Thanks for sharing. I'm inspired to be more daring in my travels.