For the past two weeks, our good friend Walt was visiting from the U.S.  One day we took him out to the fish market for a "fish and chips" lunch (below). 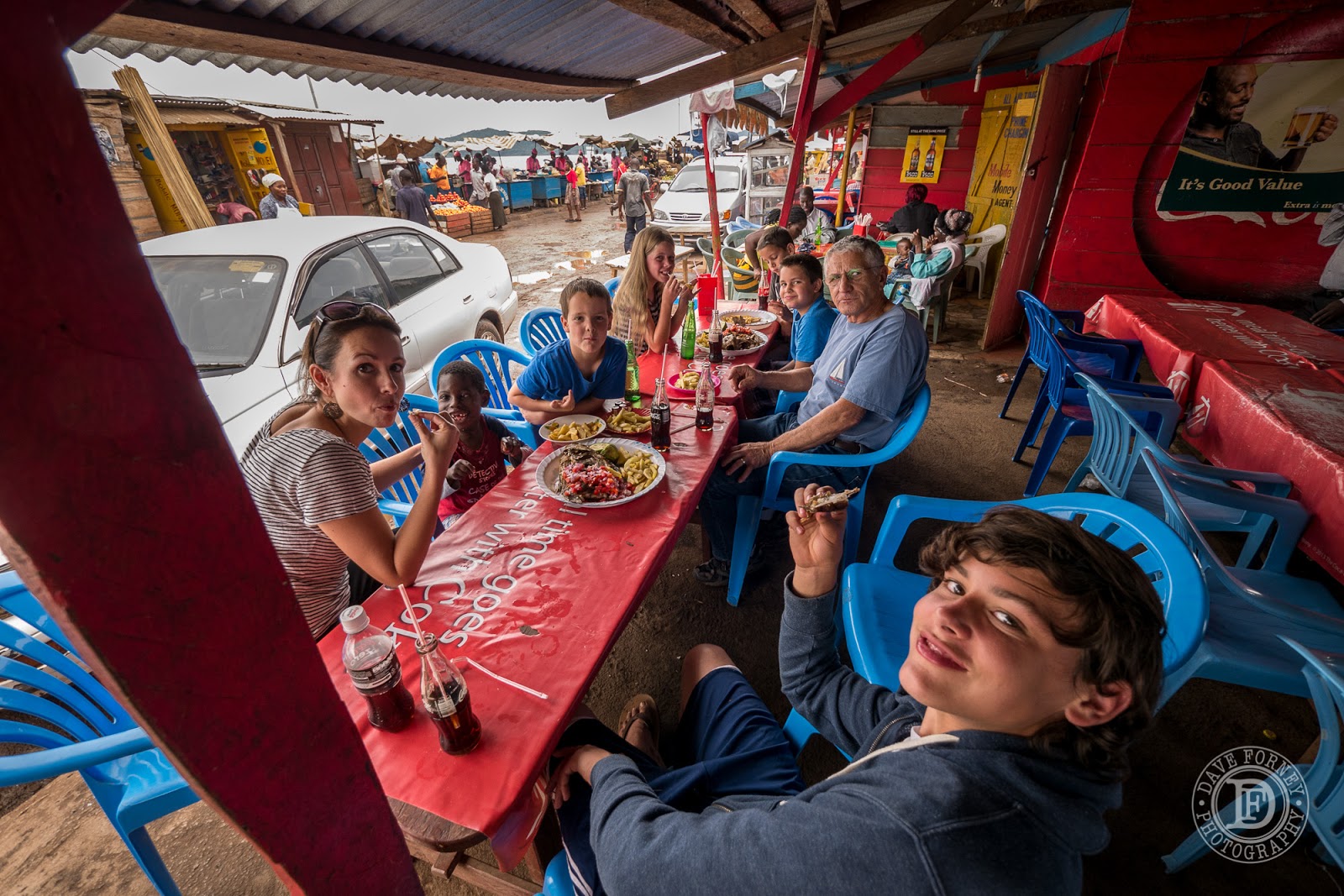 We were offered pre-fried fish, but opted instead for fresh ones--which meant we had to be patient while they were prepared.  The ones we got were as fresh as they get--nice, plump Tilapia directly from Lake Victoria into the hot frying oil.  While they were being prepared we walked around a bit. 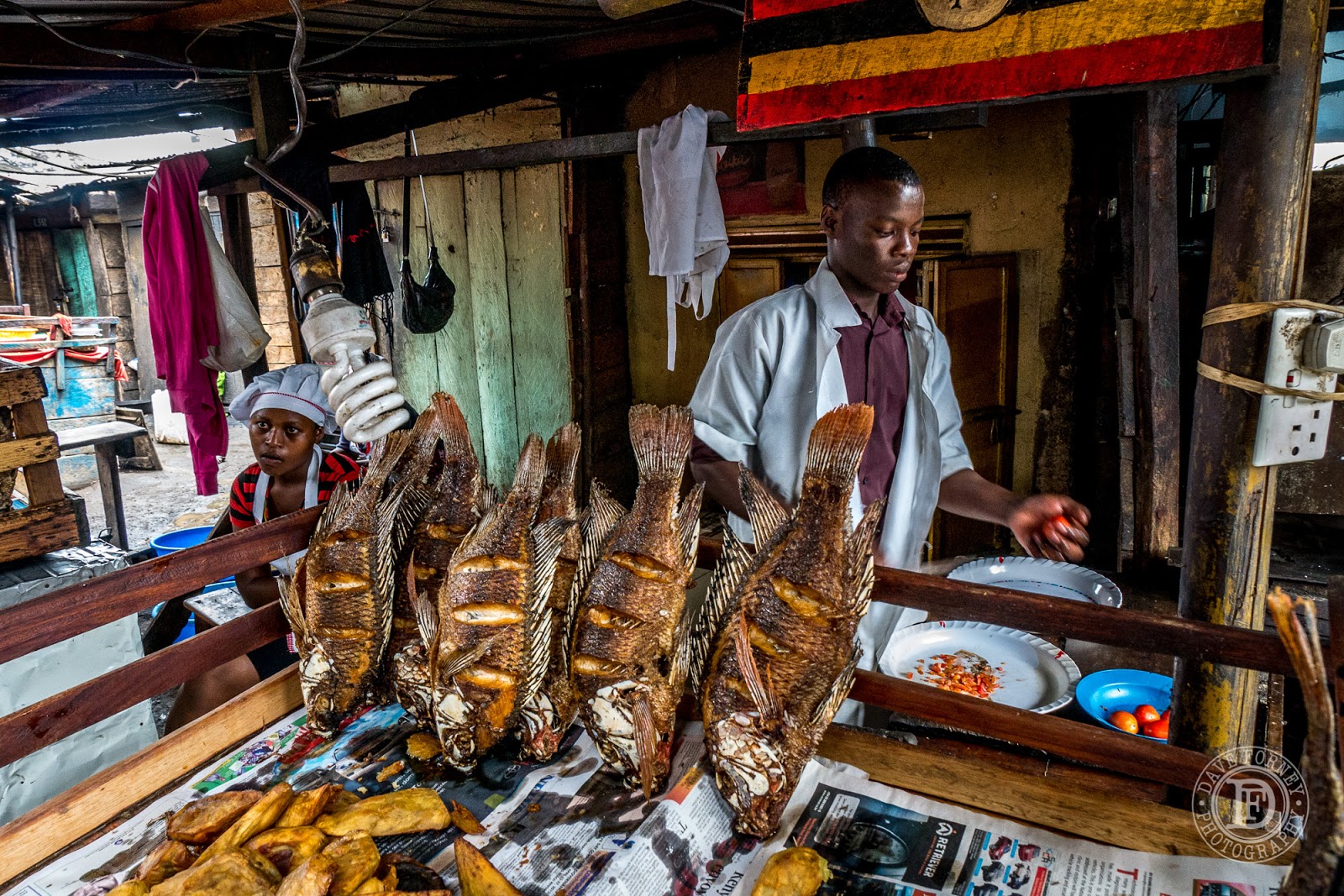 It's a very busy and bustling place--great for people watching if you like to do that sort of thing.  It's sort of like sitting in a busy airport and watching the people go by, except here the colors and smells and sounds are a lot more interesting.  Although it's the fish market there's a lot more than fish for sale.  Just about everything you could imagine is for sale up and down the crowded stalls and dirt roads around there.  It's as busy as a beehive in summer! 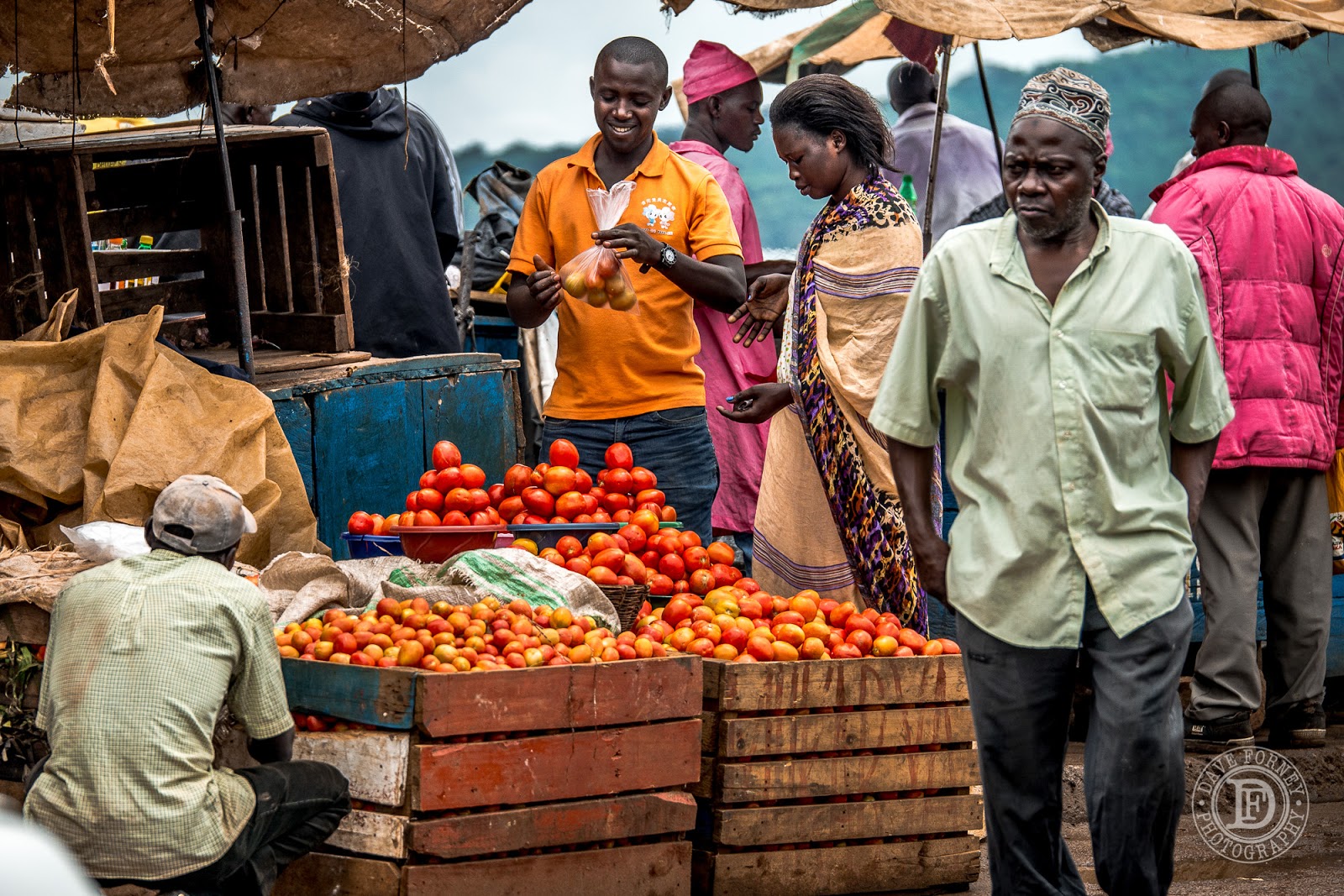 We got many offers for boat rides and fishing trips in the boats pictured here.  Sounds like fun--perhaps the boys and I will have to give it a go sometime. 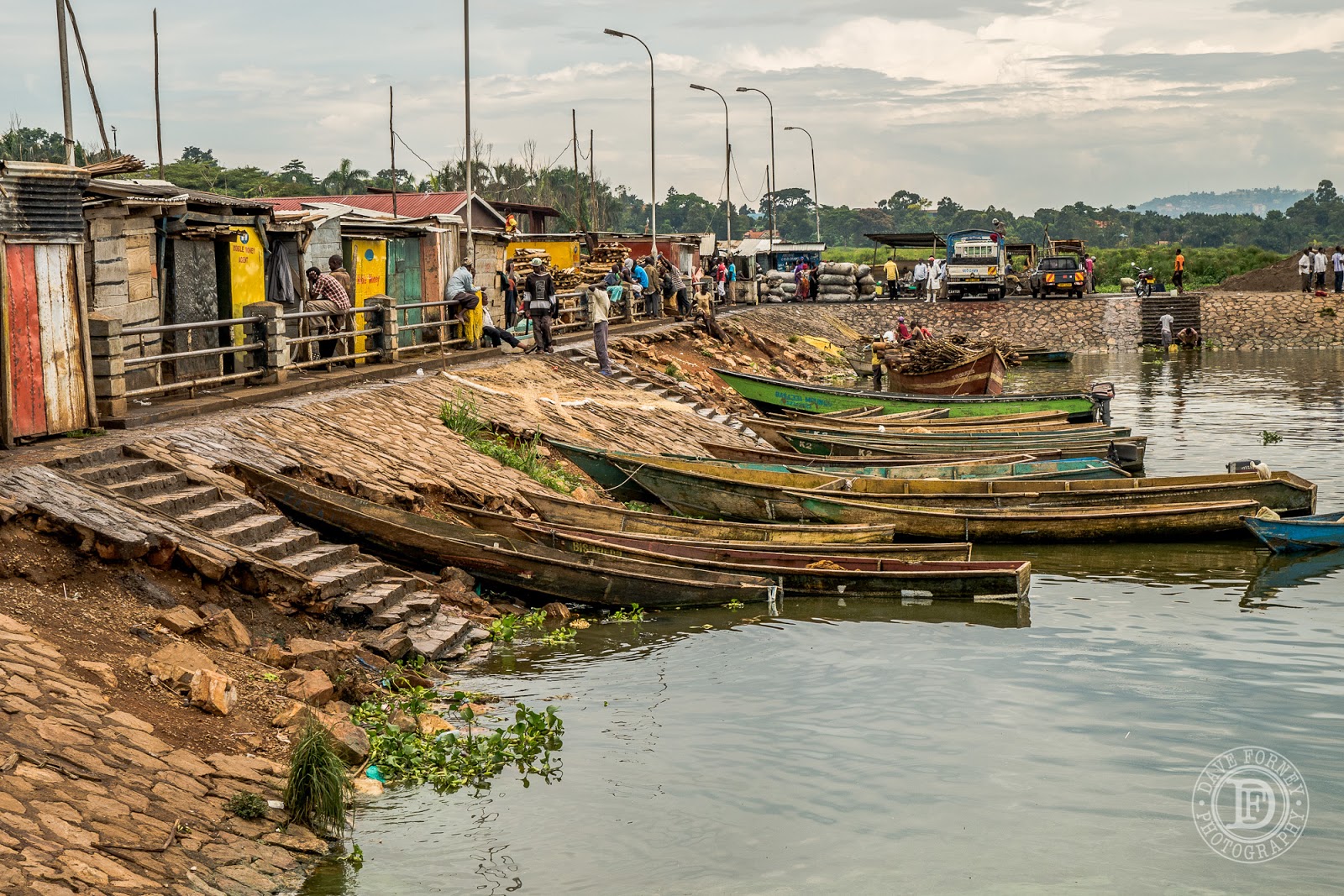 The fish they fry up for eating here, and the ones being sold below, are small.  They get much larger--huge in fact.  Some of them can get as big or bigger than me! 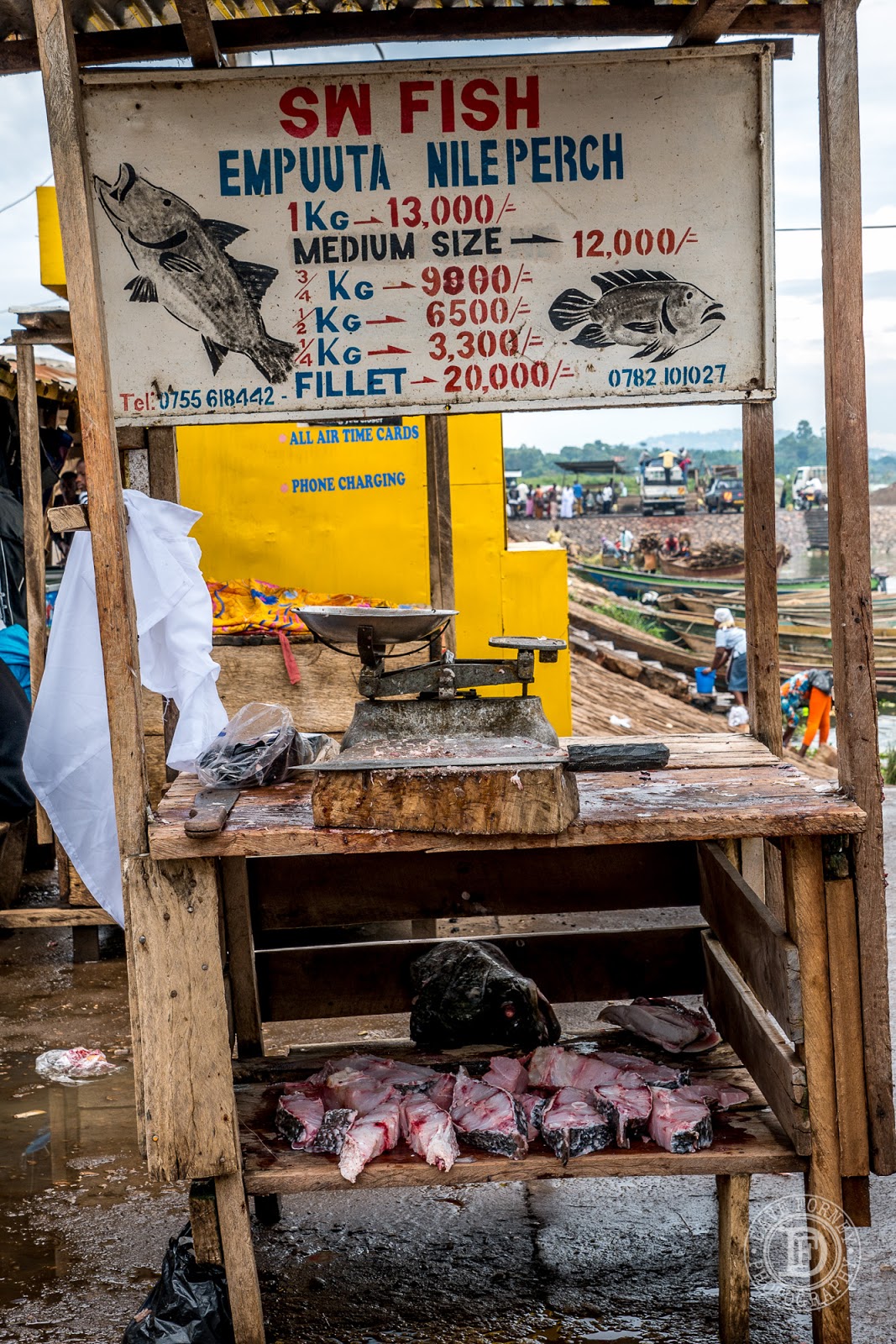 If you're in the mood for chapatis or rolex (a common street food consisting of a chapati with 2 fried eggs rolled inside with some onions and tomatoes) they have those too (below).  And there was a guy grilling some intestines and other organs.  If you've ever seen the show Bizarre Foods, the episode on Uganda involved a walk (and taste) right here in this market.  Our kids love that show, but don't understand why it's called Bizarre Foods.  They think that most of the stuff looks good and normal and tasty. 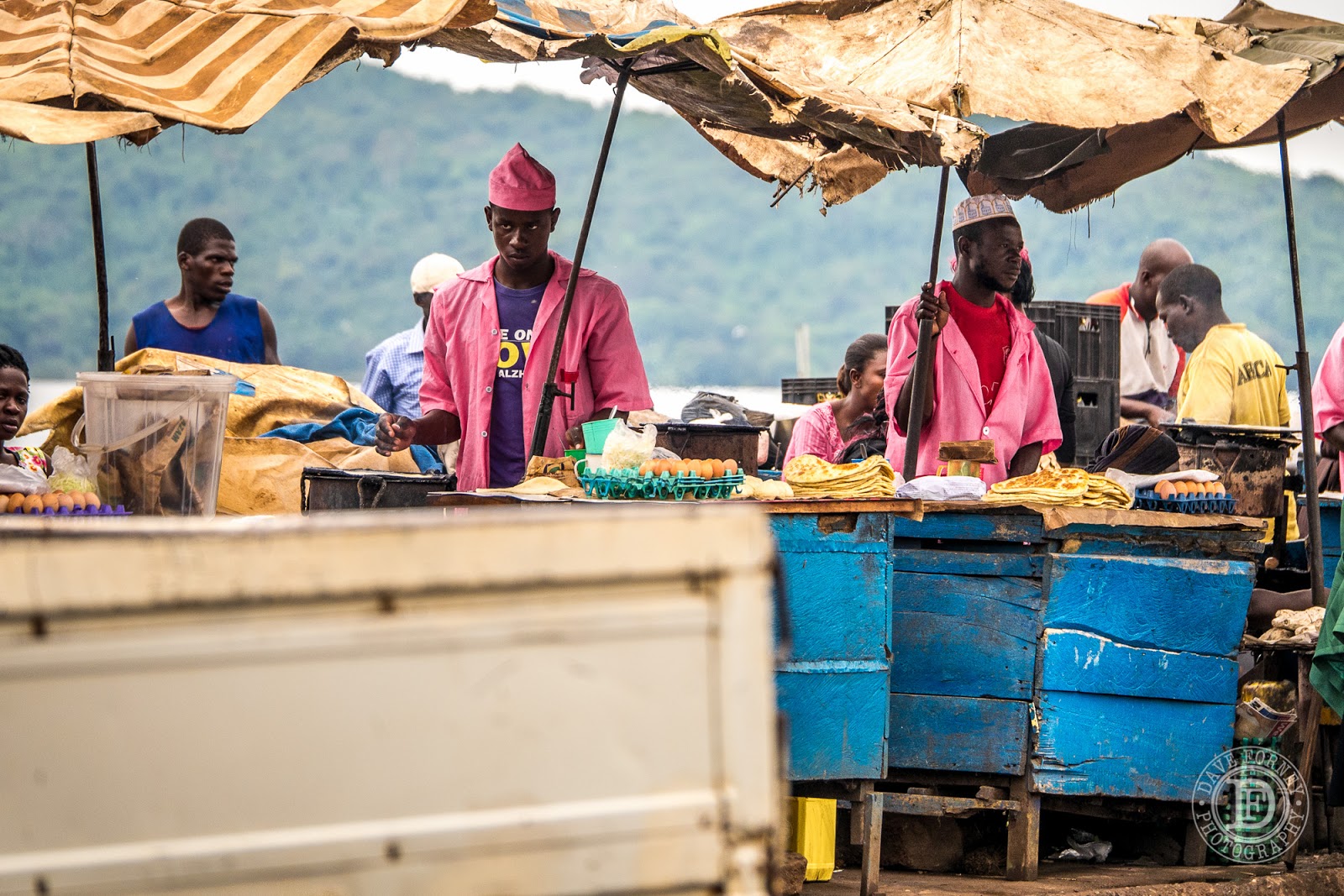 One of the favorite pastimes for guys in Kampala is pool.  You often see an old billiards table propped up on some stones (this one is pretty fancy with leveling feet) to make it level, in a dusty or muddy neighborhood, with a bunch of guys gathered around passing the time.  In Indonesia it was chess.  Here it's pool. 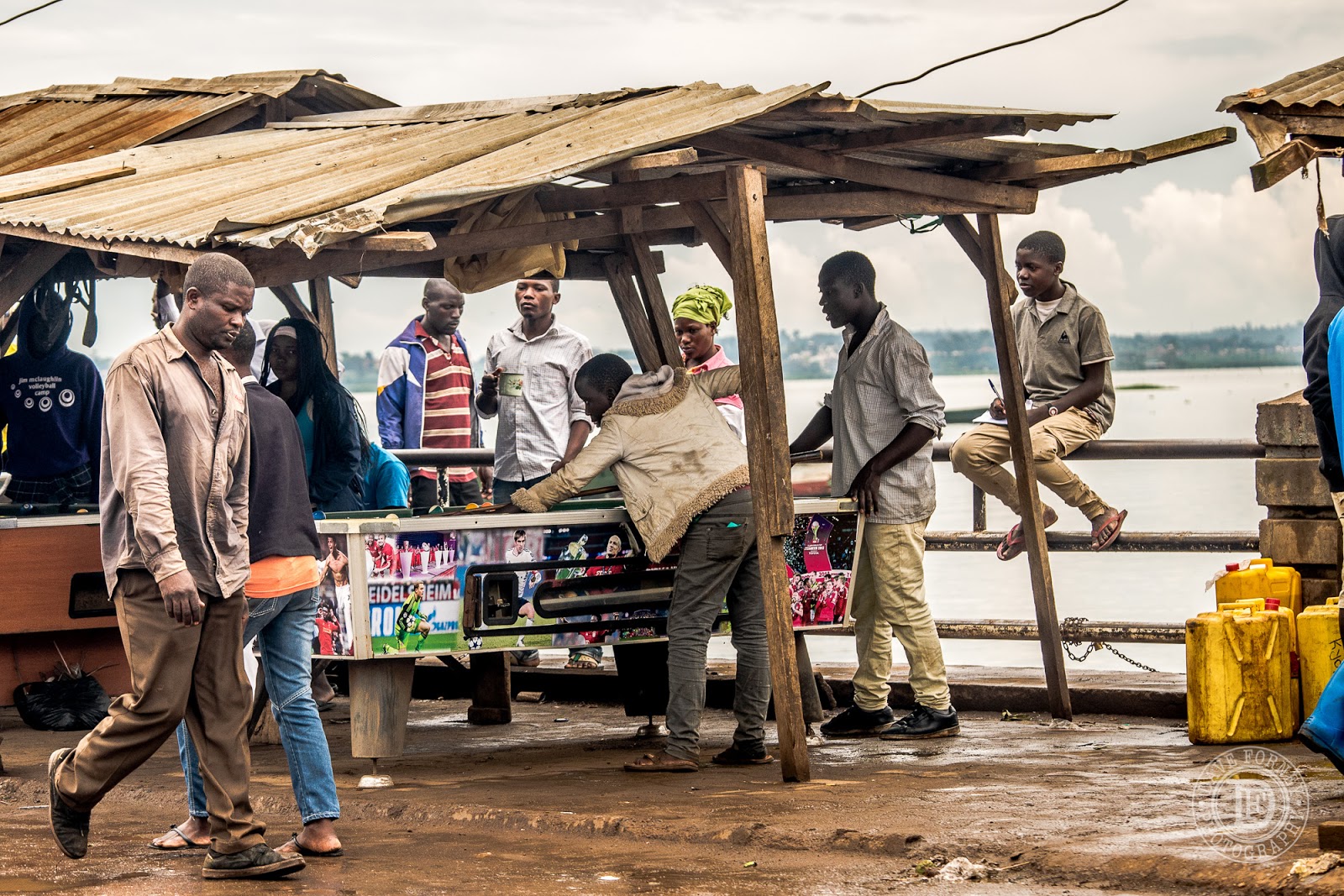 We enjoyed getting to know this little guy with a wonderful grin.  He hung out and laughed and talked with us.  He never asked for food or any handout, but it was obvious he was hungry.  When our fish came, we shared with him.  He was very excited and thankful! 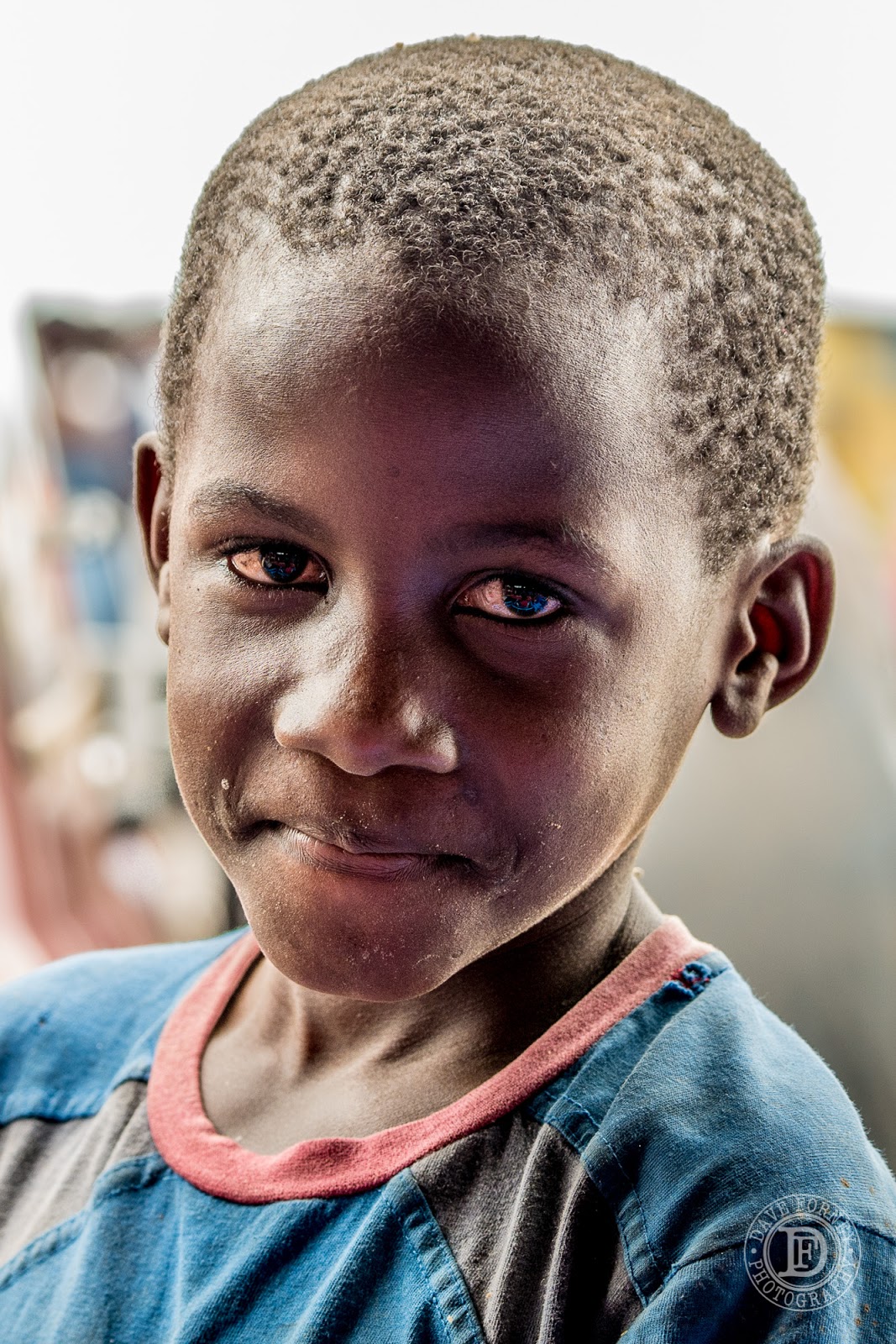 And here they are!  Perhaps you don't like fish...well, this was not like normal fish from the supermarket in the U.S.  It was super fresh, very mild, white, flaky meat, and it was done to perfection!  Seriously, it was the best fish I've had in a long, long time!  And of course the "chips" (fries) were hot and greasy and tasty!  And that homemade salsa stuff, with the limes squeezed all over the top and some salt to dip it all in?--scrumptious! 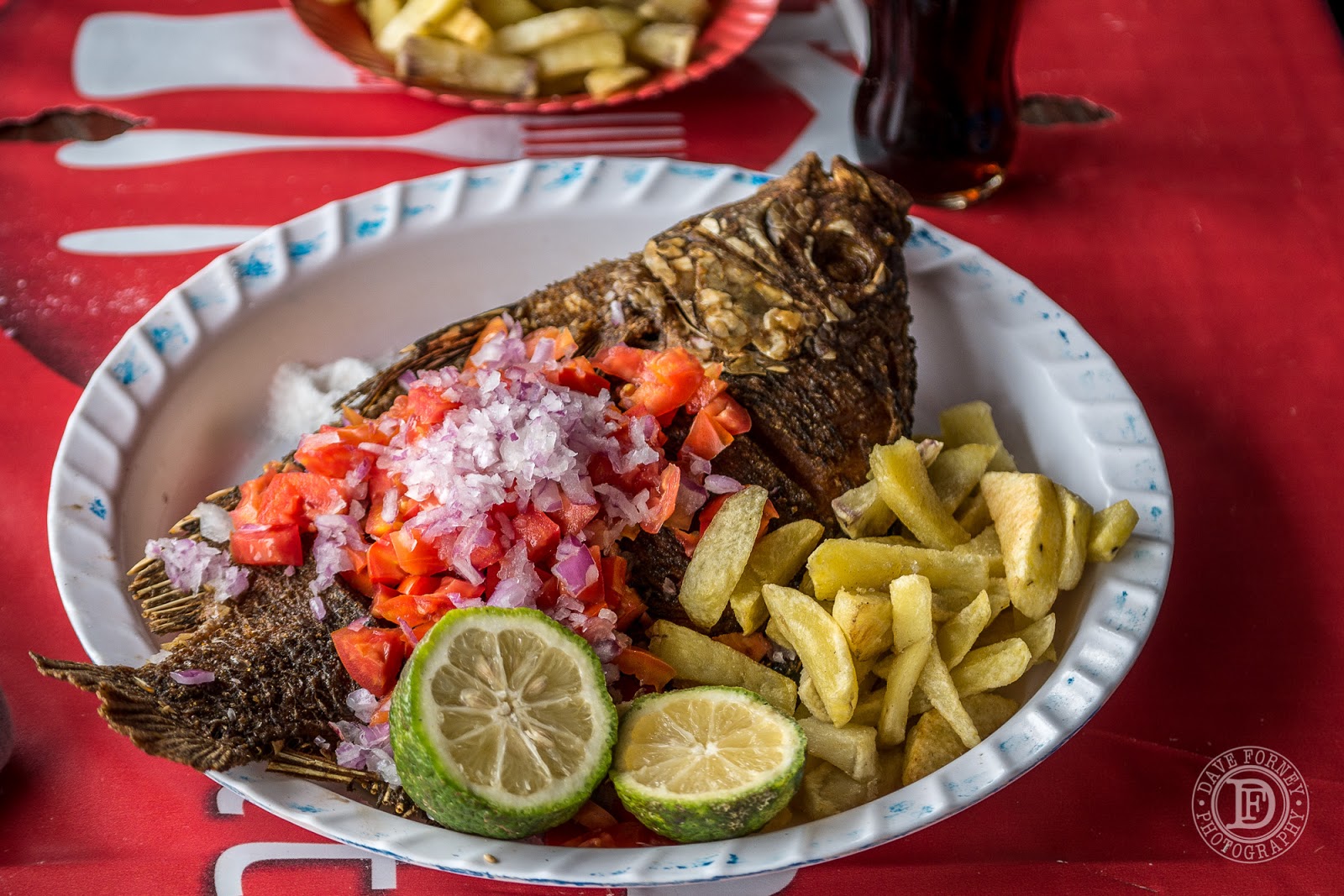 Our oldest, Britt, will eat just about any animal part that's even remotely edible.  In fact, I've never seen him shy away from anything.  Ever.  In Indonesia it was grubs--both cooked and LIVE, snails from the rice patties, frogs fried whole--guts and all, boiled frogs,  big hunks of pig fat with the hairy skin still attached, and all manner of other interesting things.  And he loved it all.  When I took him on a six-day, five-night jungle hike, he gobbled down all sorts of innards of animals, from intestines and liver, to lungs and utter.  Yep, utterly delicious--er at least chewy.  They were giving us the best parts--the meat is just average stuff in those cultures, but the organs are the best so you have to share that with the guests!  And Britt never shies away.  You gotta give him props.  We may struggle to get him to take more than one shower a week and change his clothes once in a while, but how many teenage boys do you know that will first go for the head and tail of a fish while everyone else grabs the big, boneless chunks of meat?  He said these fish had especially tasty eyeballs and brain--no joke.  He likes that stuff, as many people in other parts of the world do. 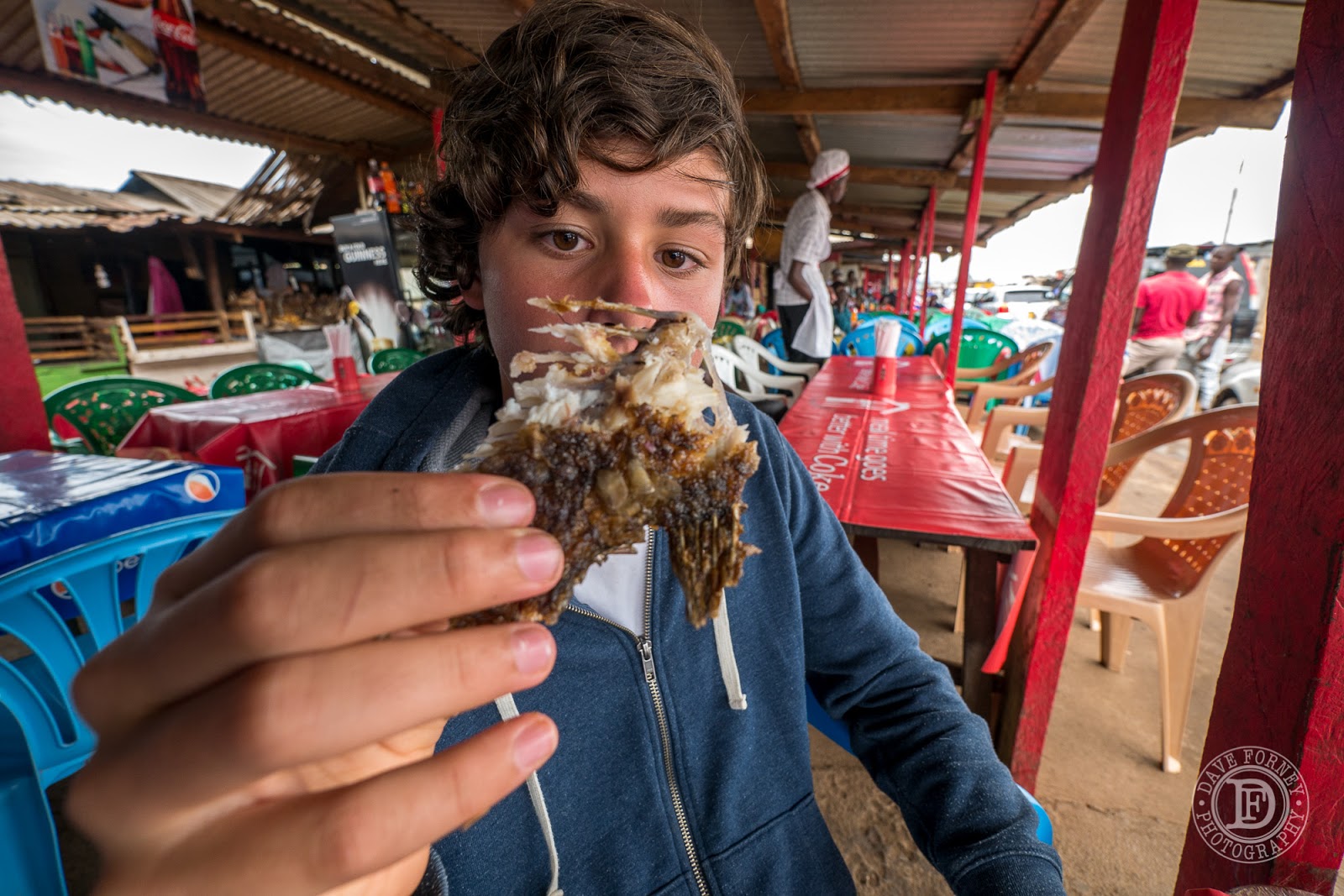 As usually happens, Tyler managed to knock over his soda--not once, not twice, but three times.  This dear lady kept coming over and cleaning it up.  We felt bad, but she seemed just thrilled that we were all eating in her stall, and didn't seem to mind the mess we were making one bit.  One time she had her baby with her when she came over to wipe up the spill, and she simply plopped the baby right into Hannahs open arms, without even thinking twice.  Hannah's smile says it all--she loves babies!  But baby's face also says it all--shock and awe!  First it was the shock (or is that straight up fear?) 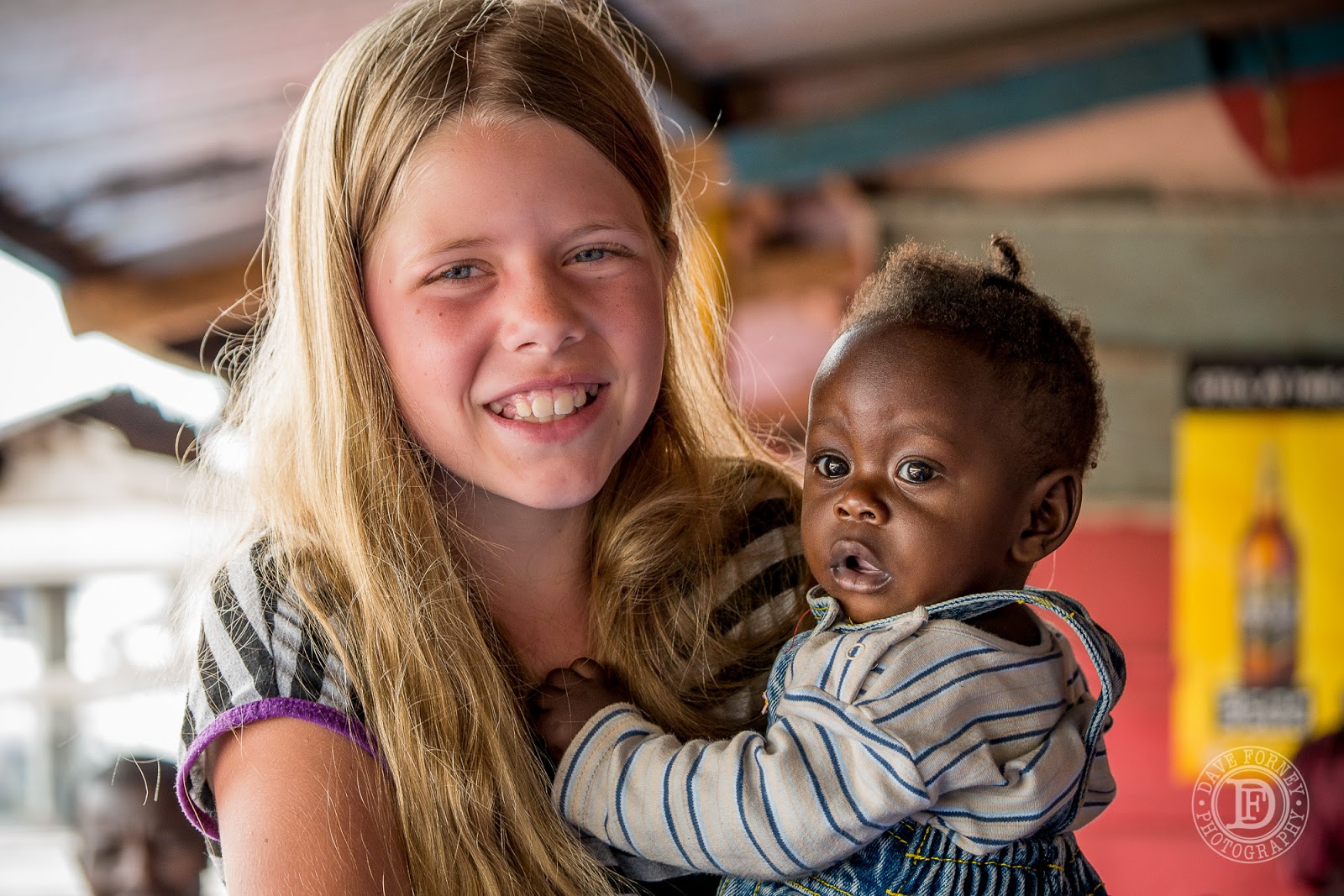 And then came the awe.  Wow!  Look at those blue eyes and pale skin and blond hair?  So strange.  I absolutely must touch it!  As often happens, Hannah became too fascinating for the baby to resist, and got her cheeks squeezed and hair pulled.  But she loved it! 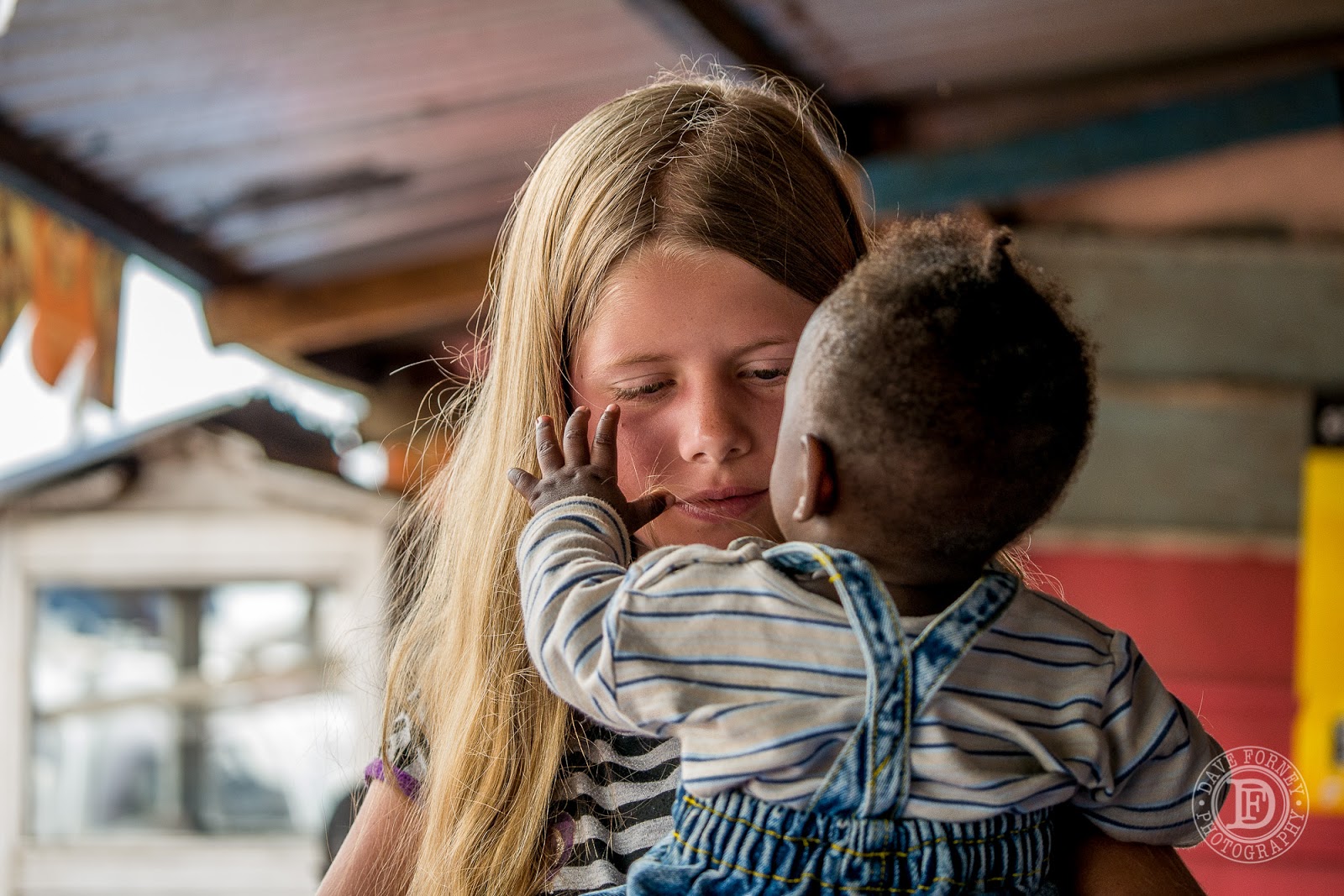 If you come over and visit sometime, we'll take you to the fish market too.  You won't be disappointed! :-)
Posted by Dave at 4:54 PM

Awesome! The fish meal looks amazing. The kids are awesome - talk about bringing them up in the most adventurous way!!