This past week I had my first chance to see some of East Africa's famous wildlife, and boy was it magnificent! 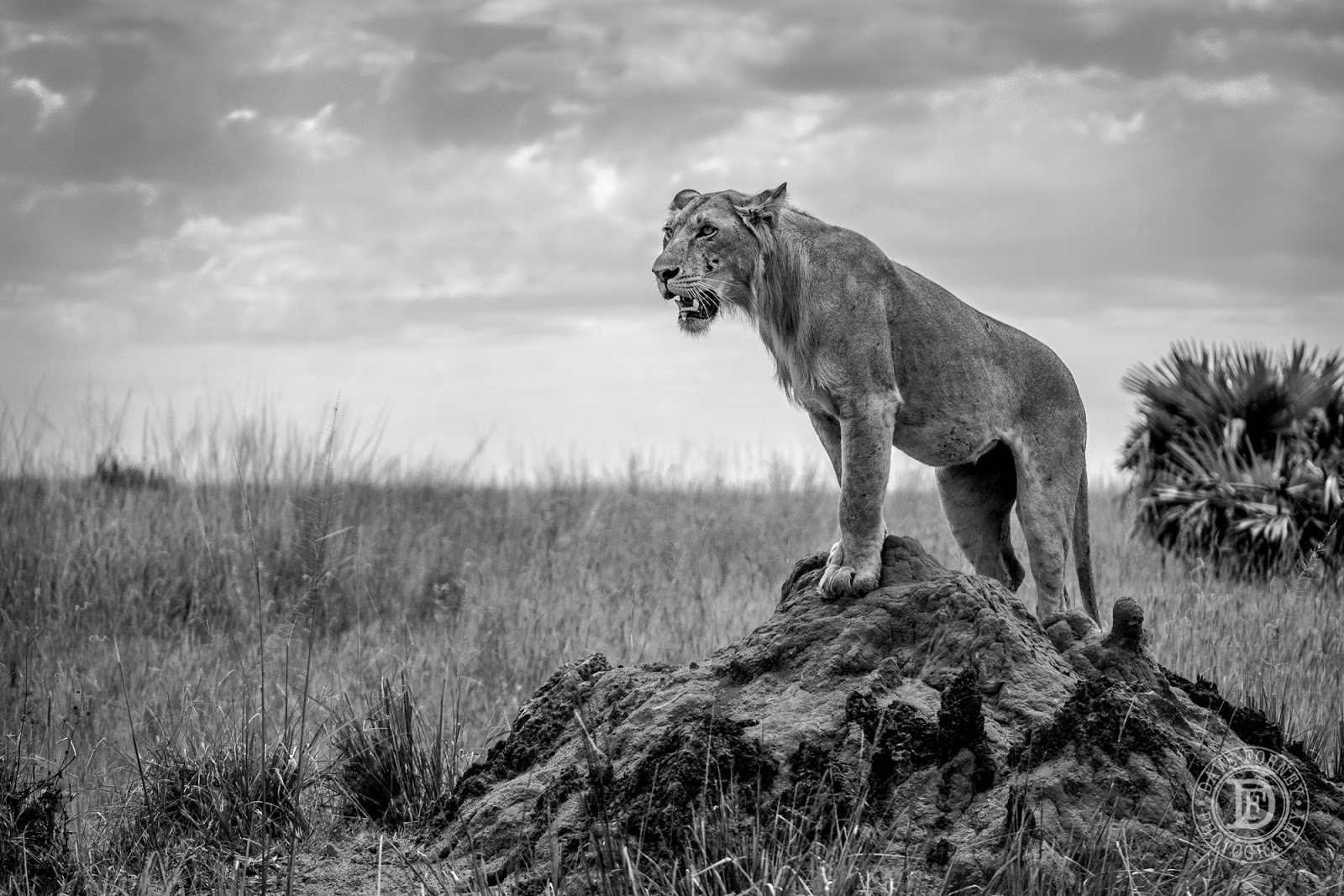 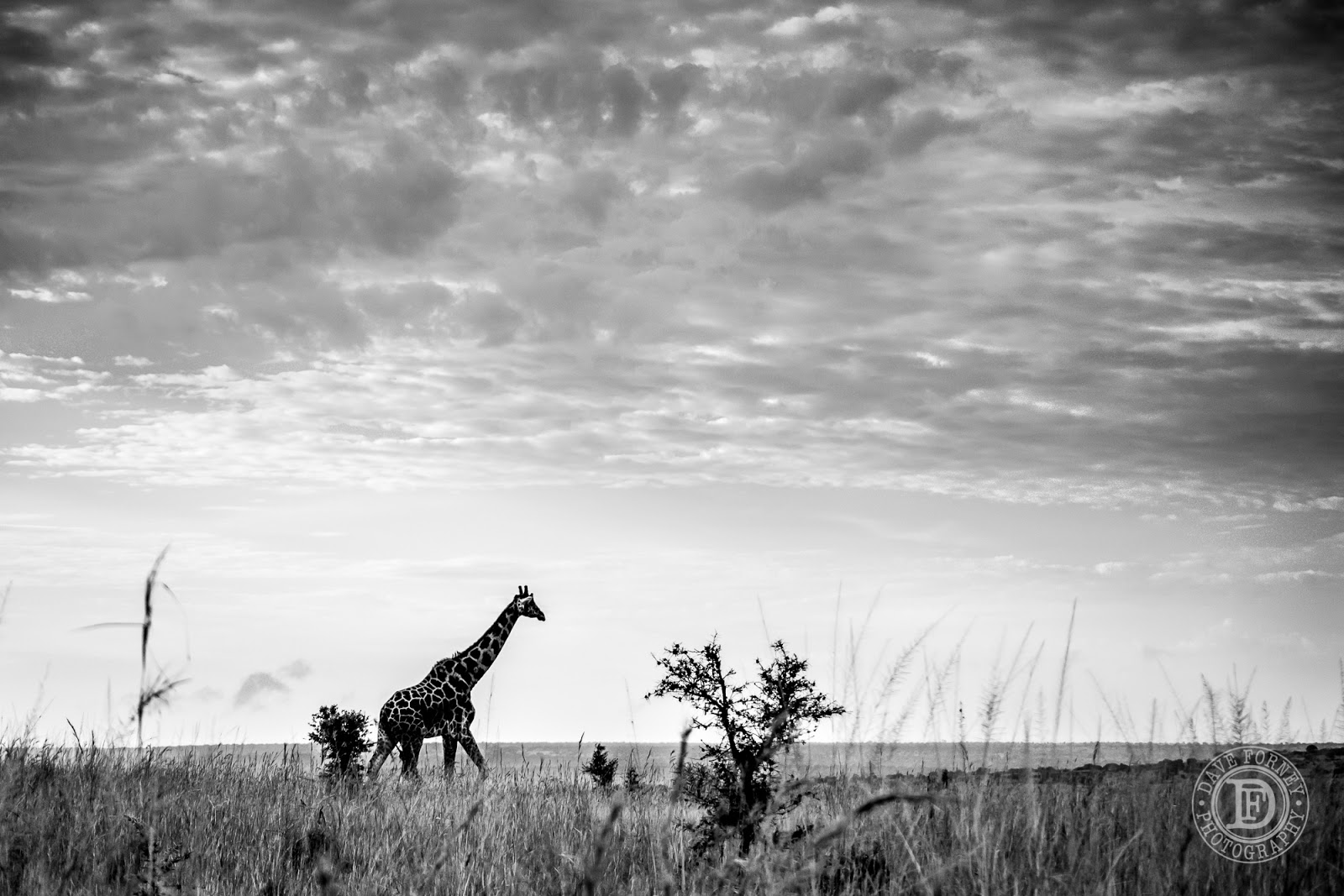 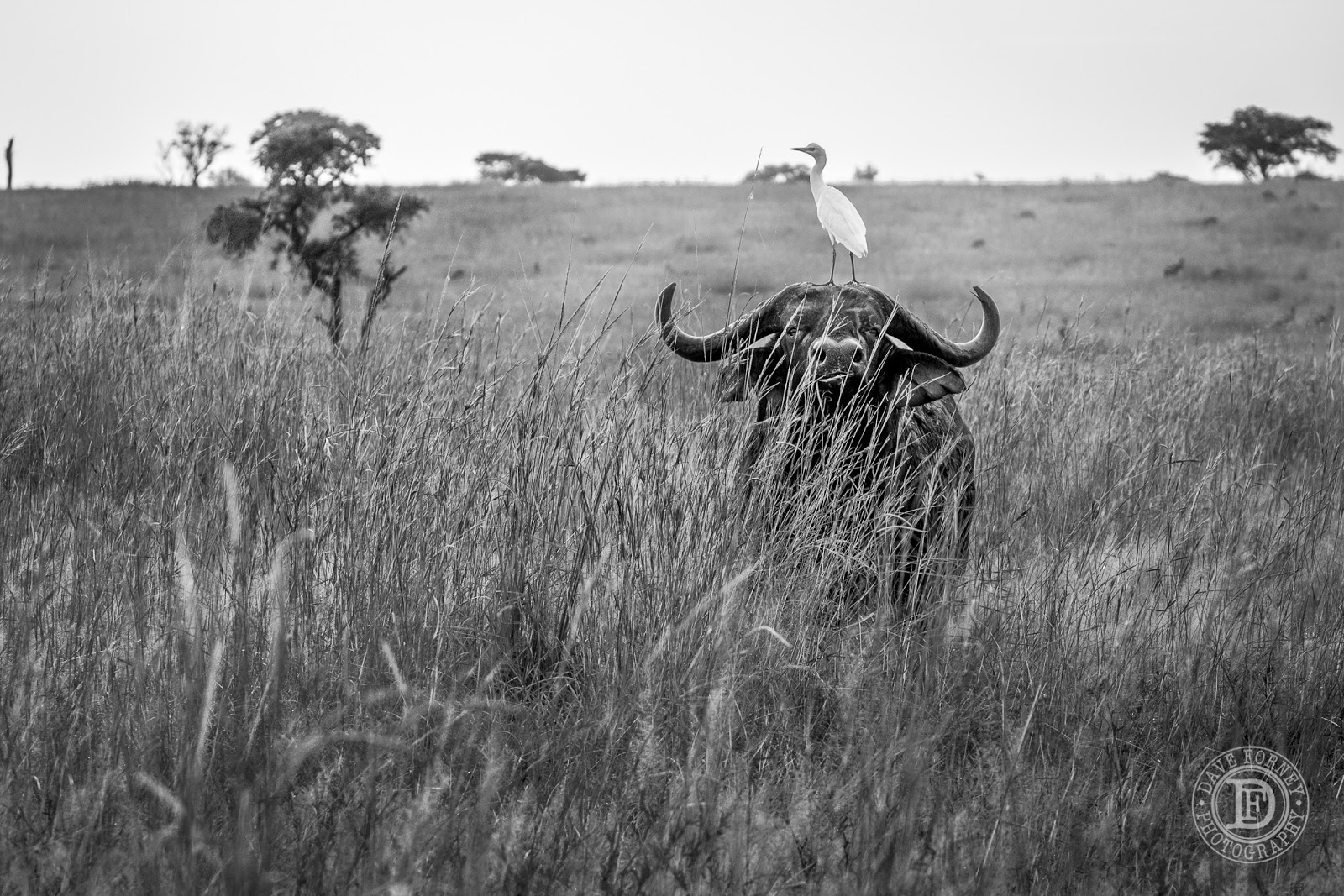 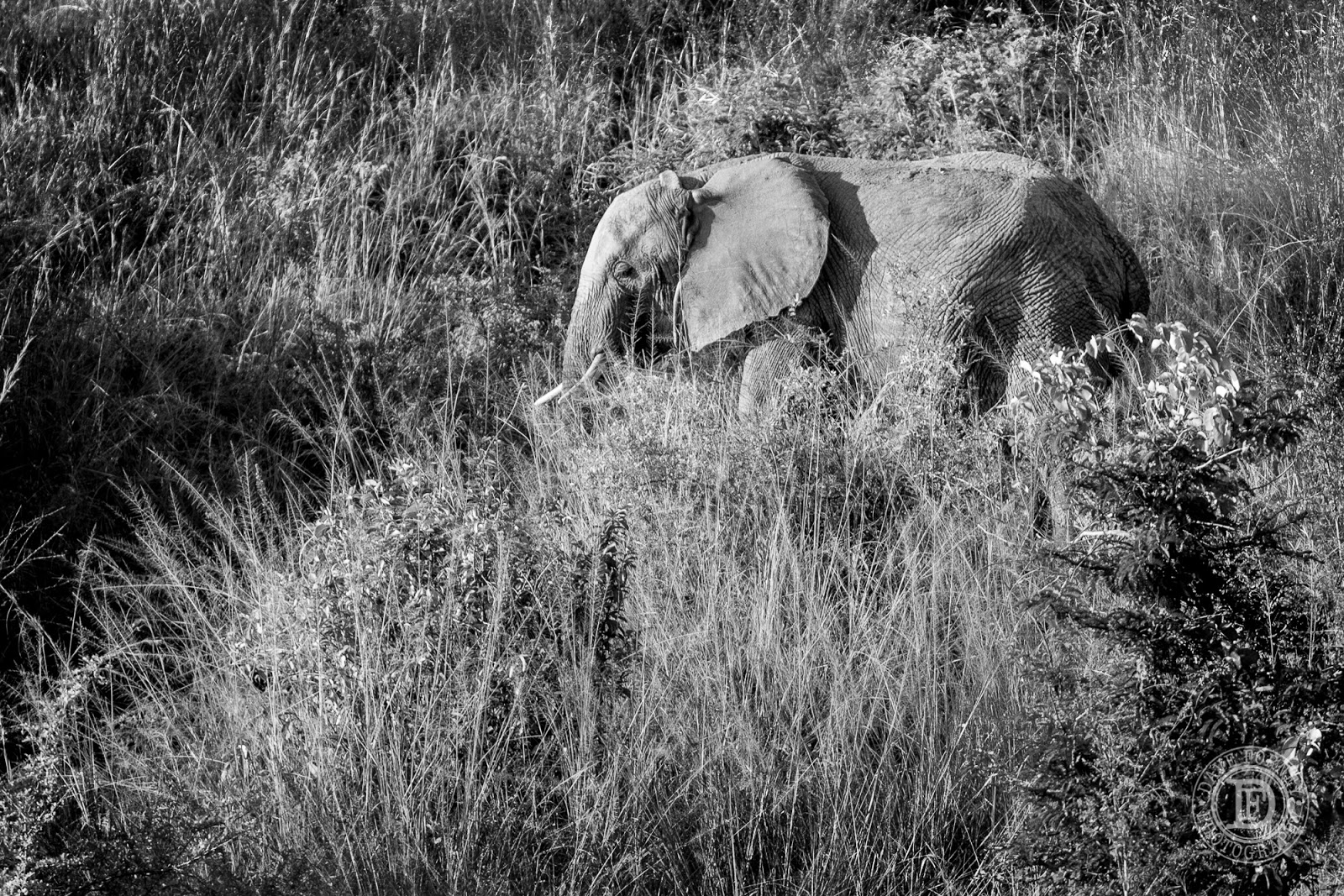 A few times a year we (MAF Uganda) wind up flying short-term mission teams to one or another of Uganda's national parks, for a quick and scenic ending to a busy mission trip.  It's cheaper for them and MAF if, in a case like this, they just have the plane and pilot accompany them on the overnight trip, rather than have us fly up twice to drop them off and then pick them up again.  Last week was my first chance to be the lucky pilot that got to fly one of these groups.  Below, is a picture of one of our Caravans as it flies about 9,000' above Murchison Falls National Park, the park where I took the mission team.  If you look closely, just in the upper left corner of the picture, in the shadow, you can actually see the airstrip, Pakuba, which is located in the Park. 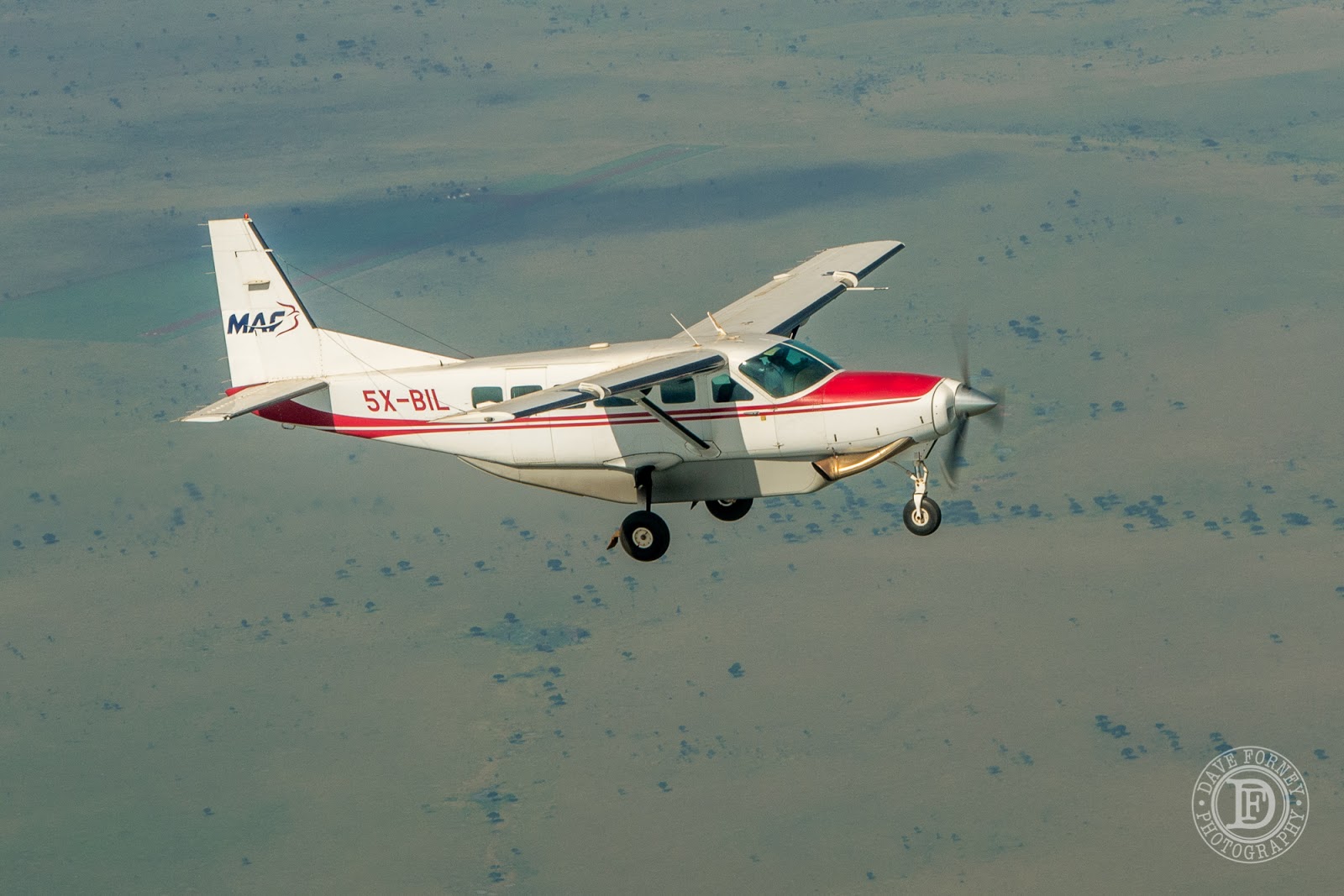 The group I flew was a short-term team from a San Francisco church, who was here with Compassion International.  It was a privilege to get to spend some time hanging out with them and getting to hear about their ministry, both back in their home city in the U.S., as well as here in Uganda. 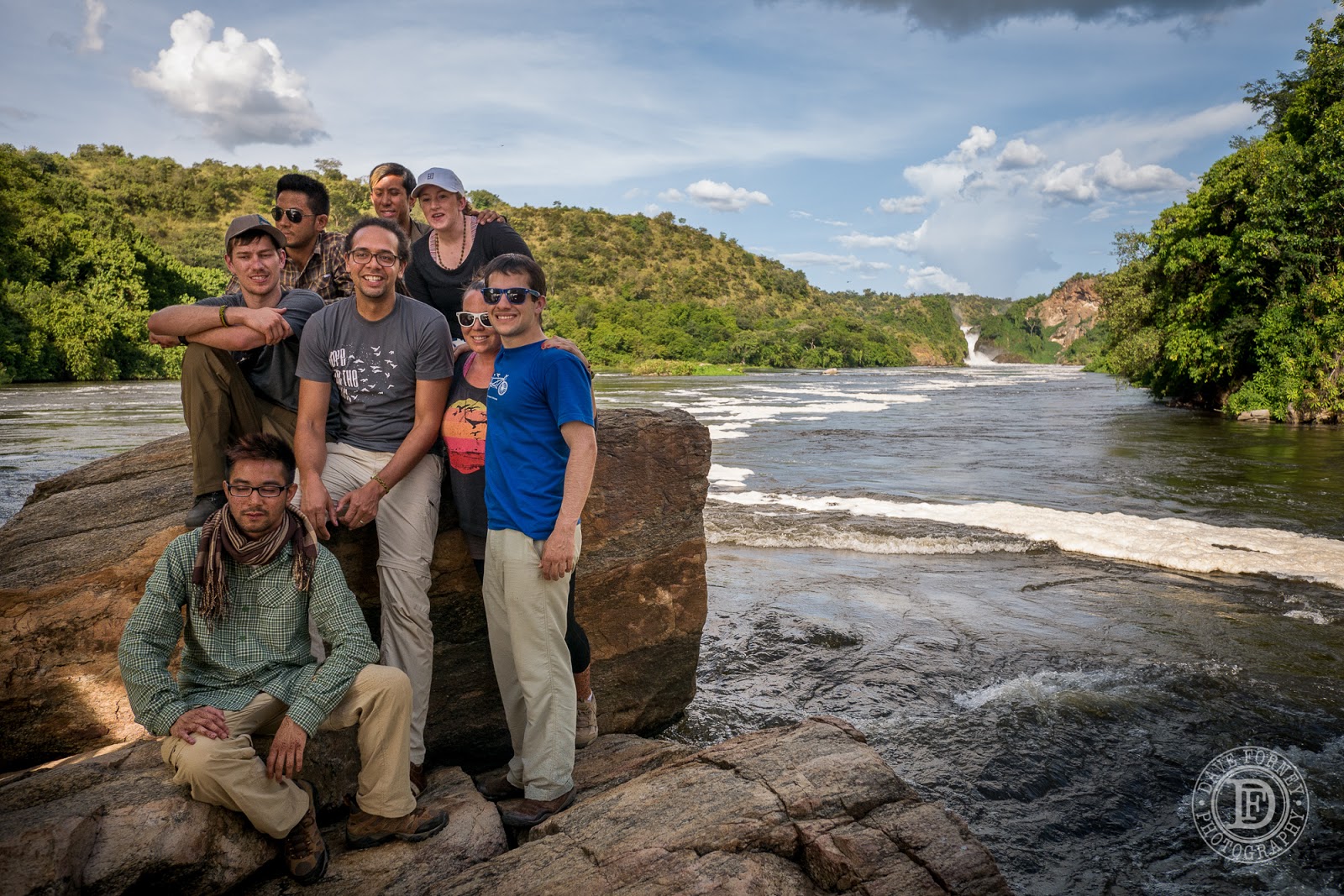 We were only gone 24 hours, but we sure saw a lot in that time.  After arriving just before noon, we had lunch and then went on a riverboat cruise up the Nile to the base of Murchison Falls, from which the park gets it's name.  This stretch of river is full of thousands and thousands of hippos (below).  It was an absolutely beautiful afternoon! 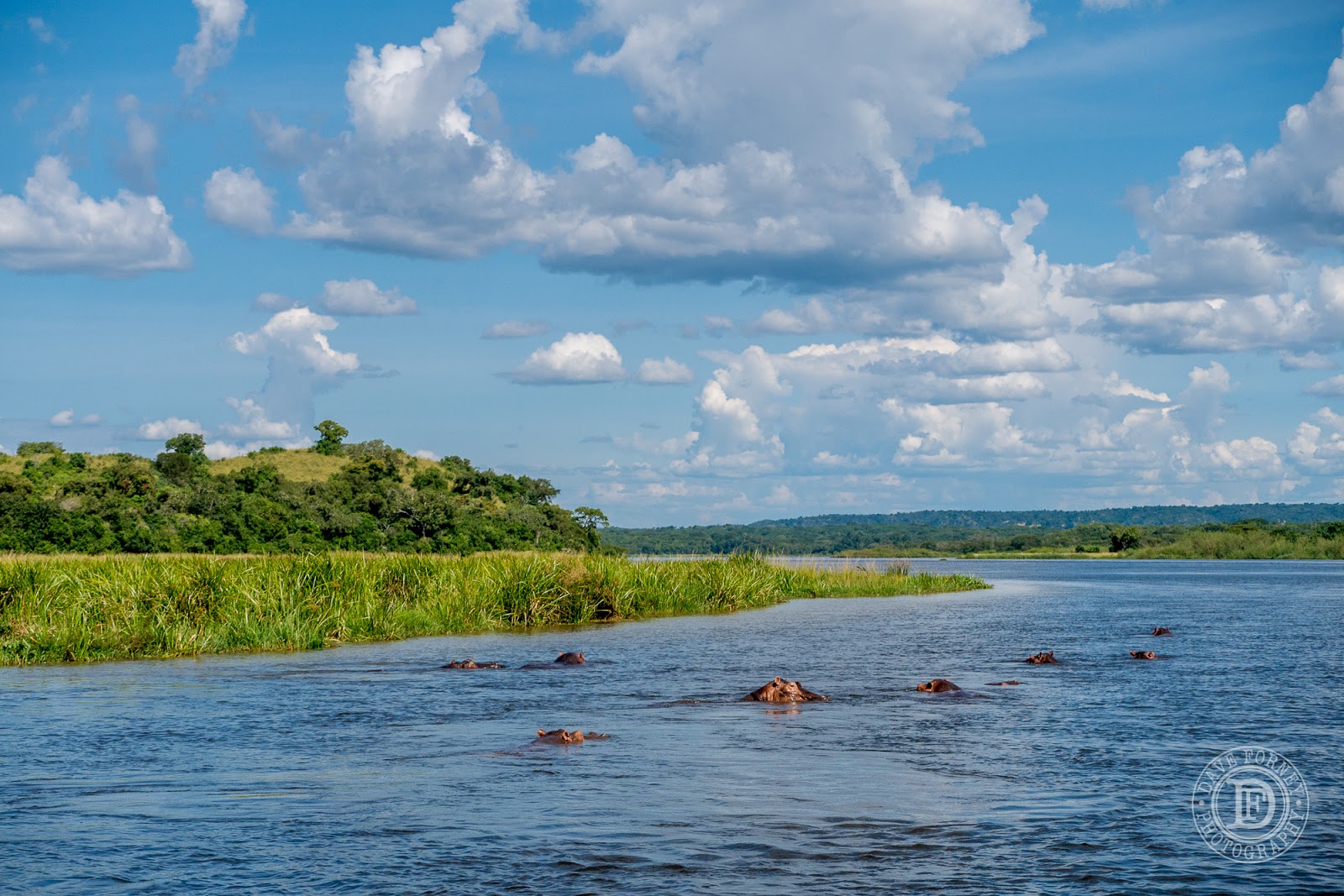 Elephants like to come down to the edge of the river to drink and play in the water, and just enjoy the cooler temperatures and shade.  Bull elephants, like the one below, tend to be off by themselves most of the time.  I thought this was a cool shot with the hippos in the foreground. 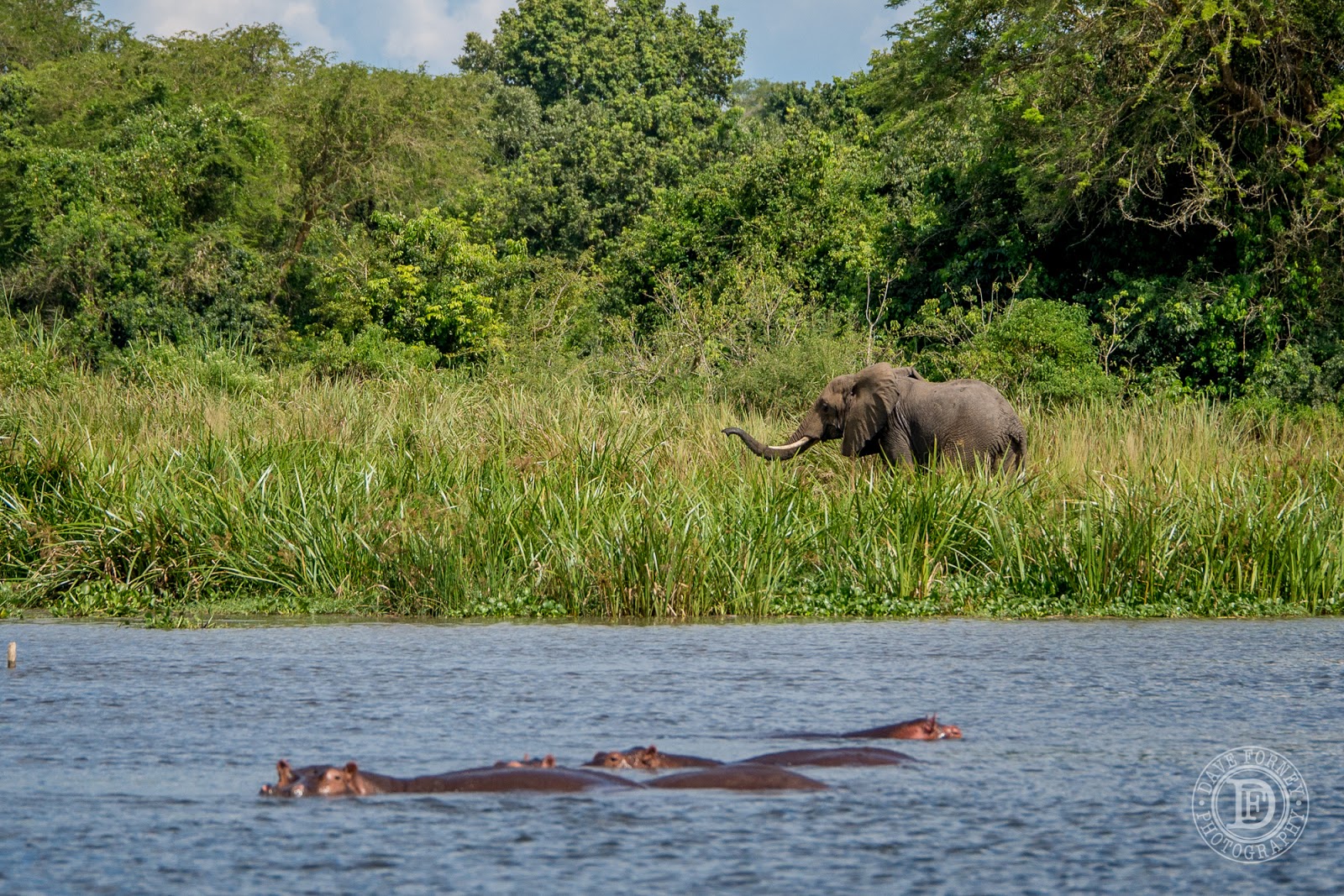 About a half mile away from the bull was a family of elephants, probably mostly females and youngsters.  As we passed by, the mama was putting her ears out really big and facing off at us--I think that's supposed to be intimidating.  Hidden in the grass beside her is a tiny, little baby elephant, much smaller than the one standing just to her left.  It was very cute, but we only caught a few glimpses of the baby, as it stayed mostly under its mama's legs. 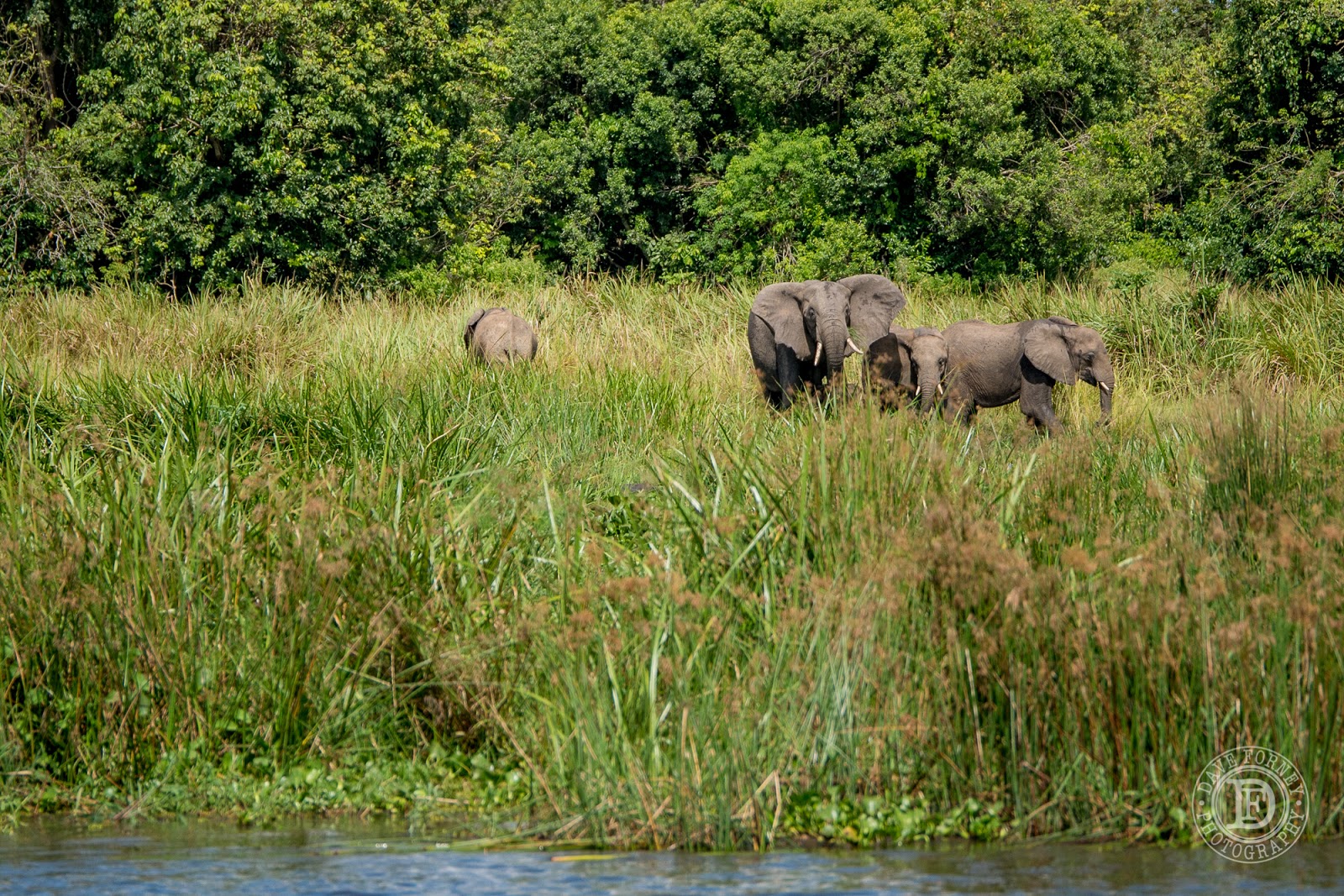 And here are the falls themselves.  Almost the entire Nile is forced through a very narrow rock gorge that is just seven meters wide in the narrowest place.  It's quite impressive. 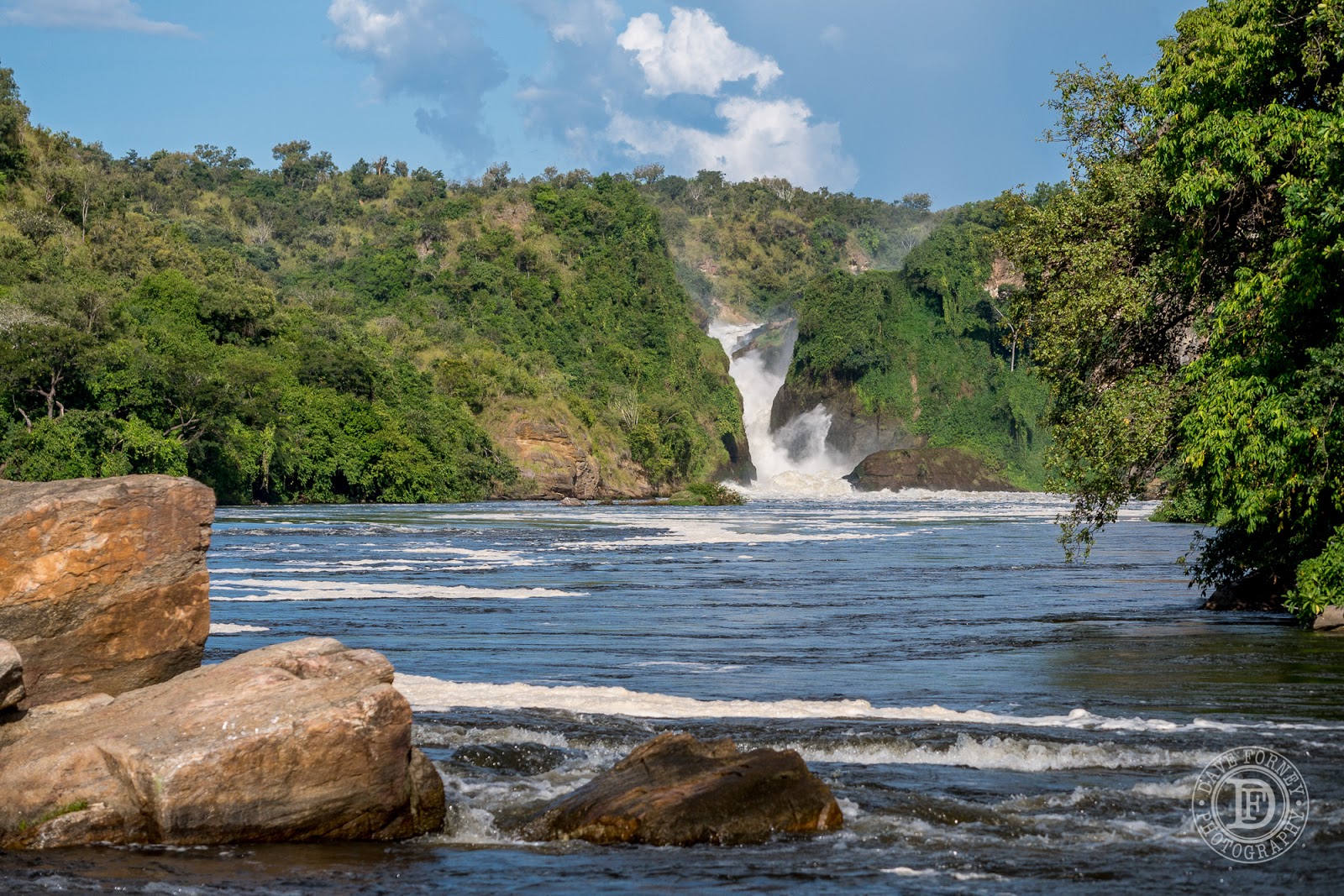 This is just an average, boring, white-dirt cliff at the river's edge, right?  Wrong. 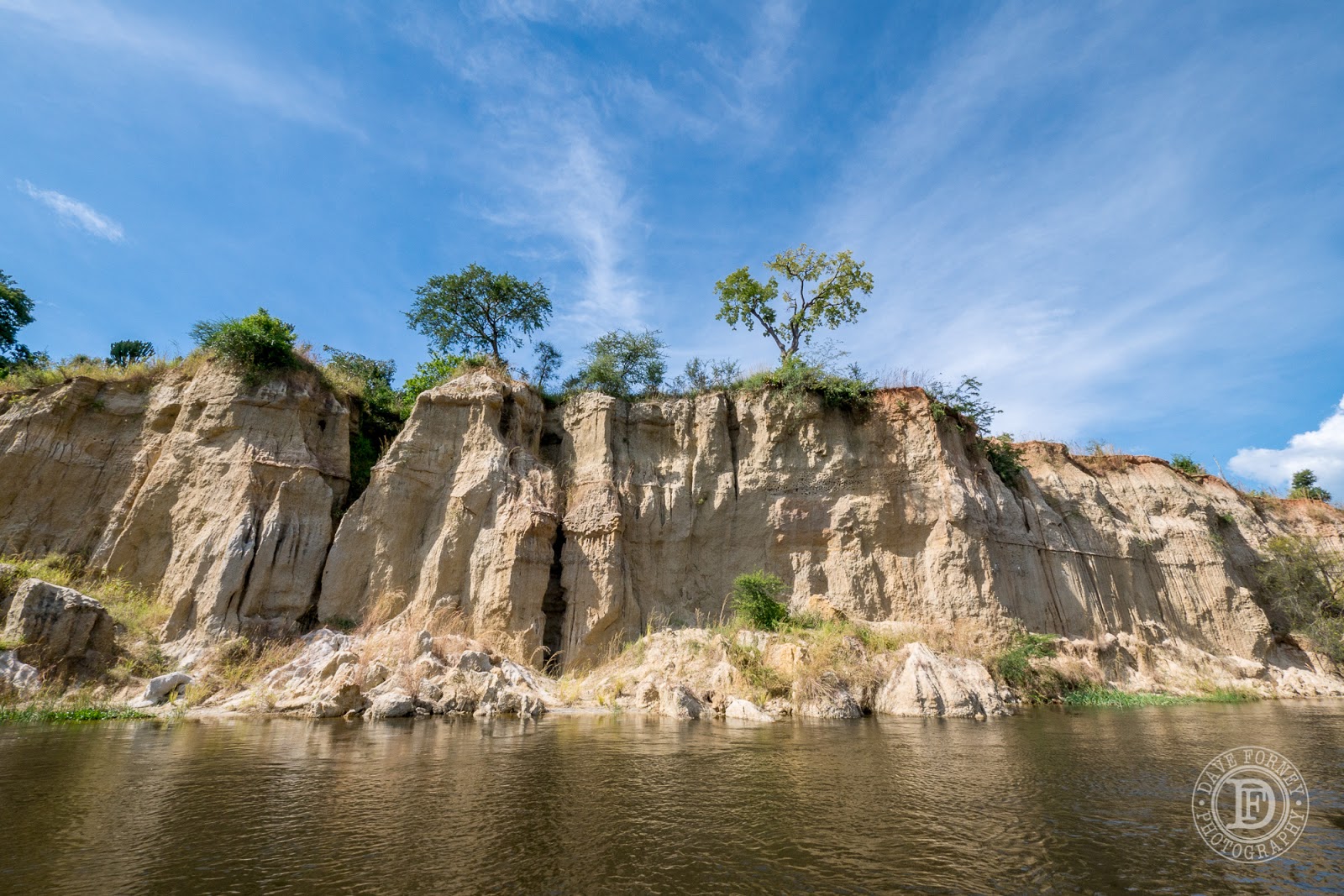 If you look closer you can see that the cliff is full of holes that are the homes of a whole bunch of very colorful bee eater birds. 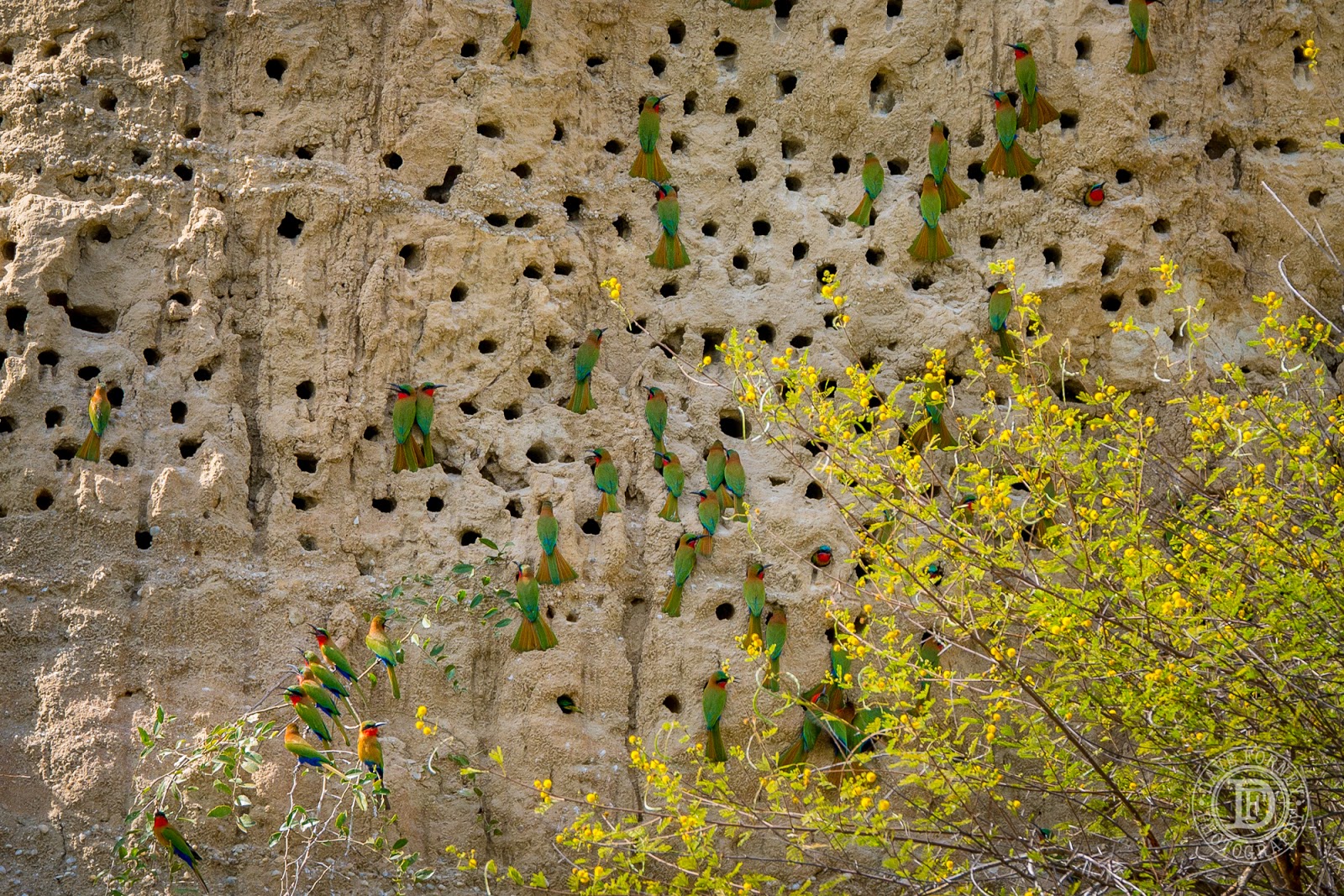 When they take flight, they expose even more of their color from the undersides of their wings.  I wish I had taken my good camera with me, but I left it at home because of it's size and weight (being the pilot who was just getting to ride along, I didn't want to have a big, huge, bulky camera getting in everyone's way.)  So this is as close/good as I could get with my little micro 4/3 camera from the distance we were.  Still, you can get the idea--the birds are beautiful!  We saw many, many other birds as well, but again, it was hard to get good shots with the camera and lenses I had. 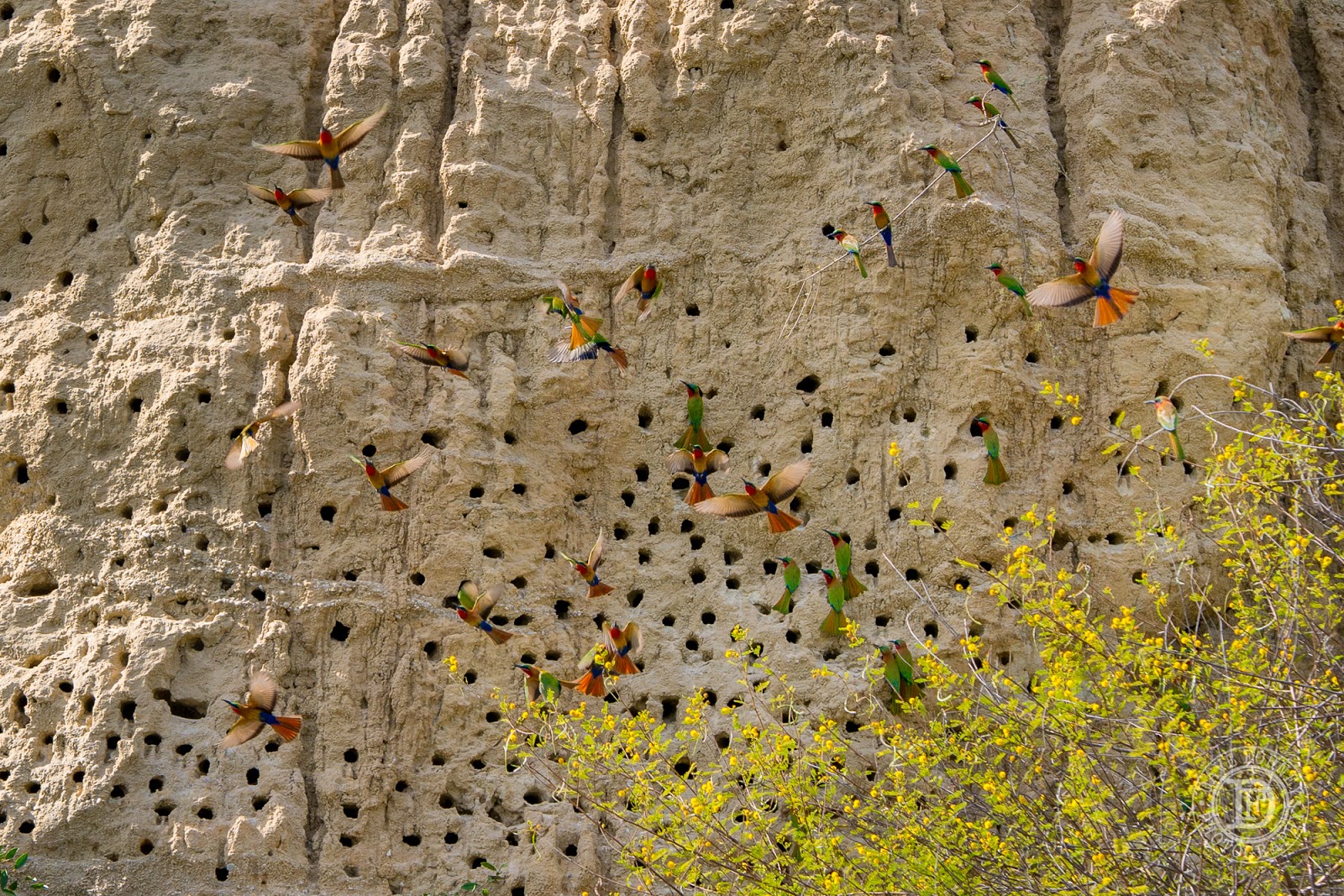 The next morning everyone took a game drive before we flew back to Kampala.  I only got to be part of it for a short time, since they dropped me off at the airstrip by 8:00 to do a pre-flight and get the plane ready for our departure a few hours later.  Even so, I still got to see a bunch of animals on the way.  Below, a huge, old bull giraffe walking alone.  Do you see those light, round, scar-looking marks at the base of his neck?  Those are from fights with other bulls, where they swing their heads and nock each other with frightening force--the horns leaving bloody wounds.  I imagine this guy must have had quite a battle a little while back. 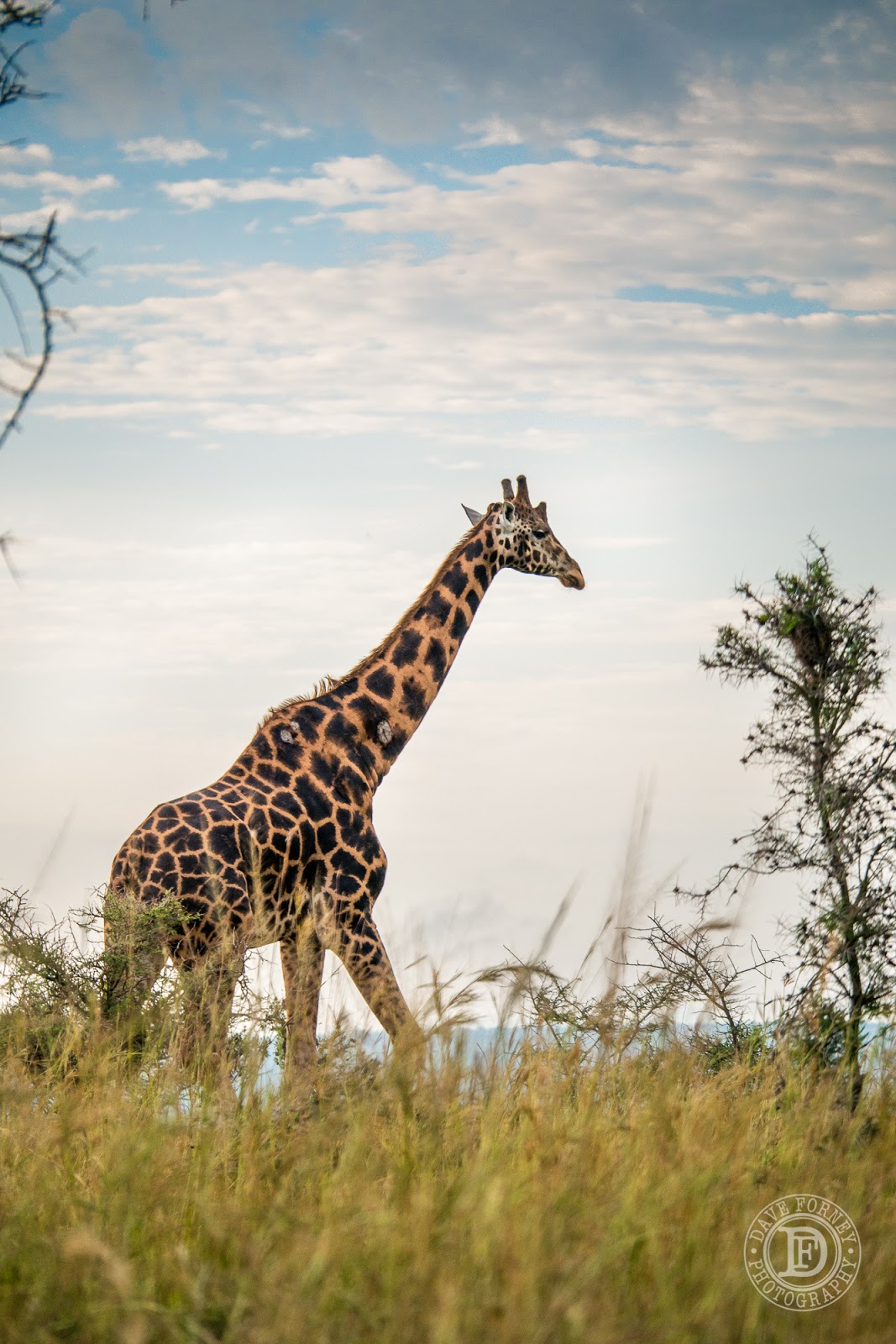 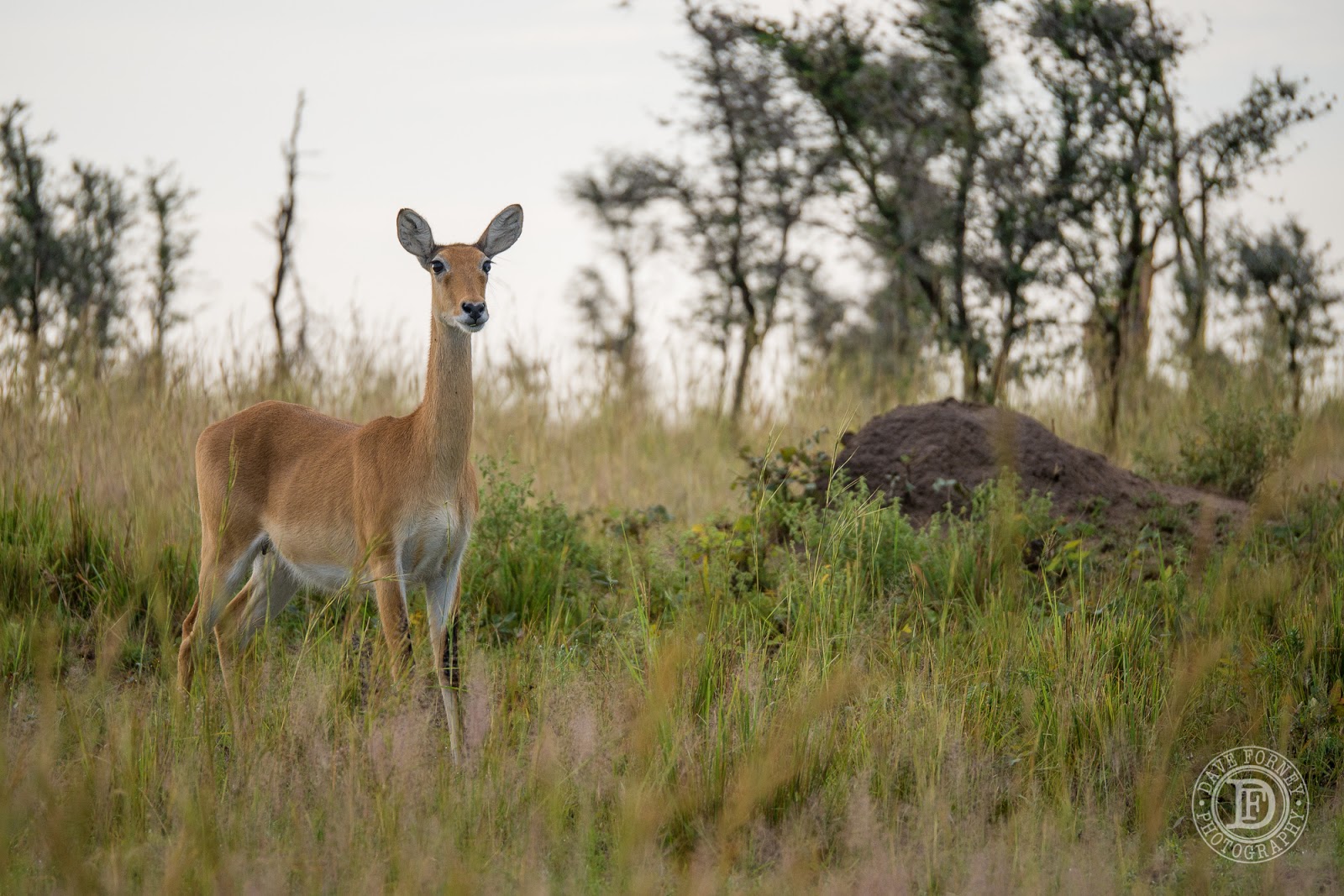 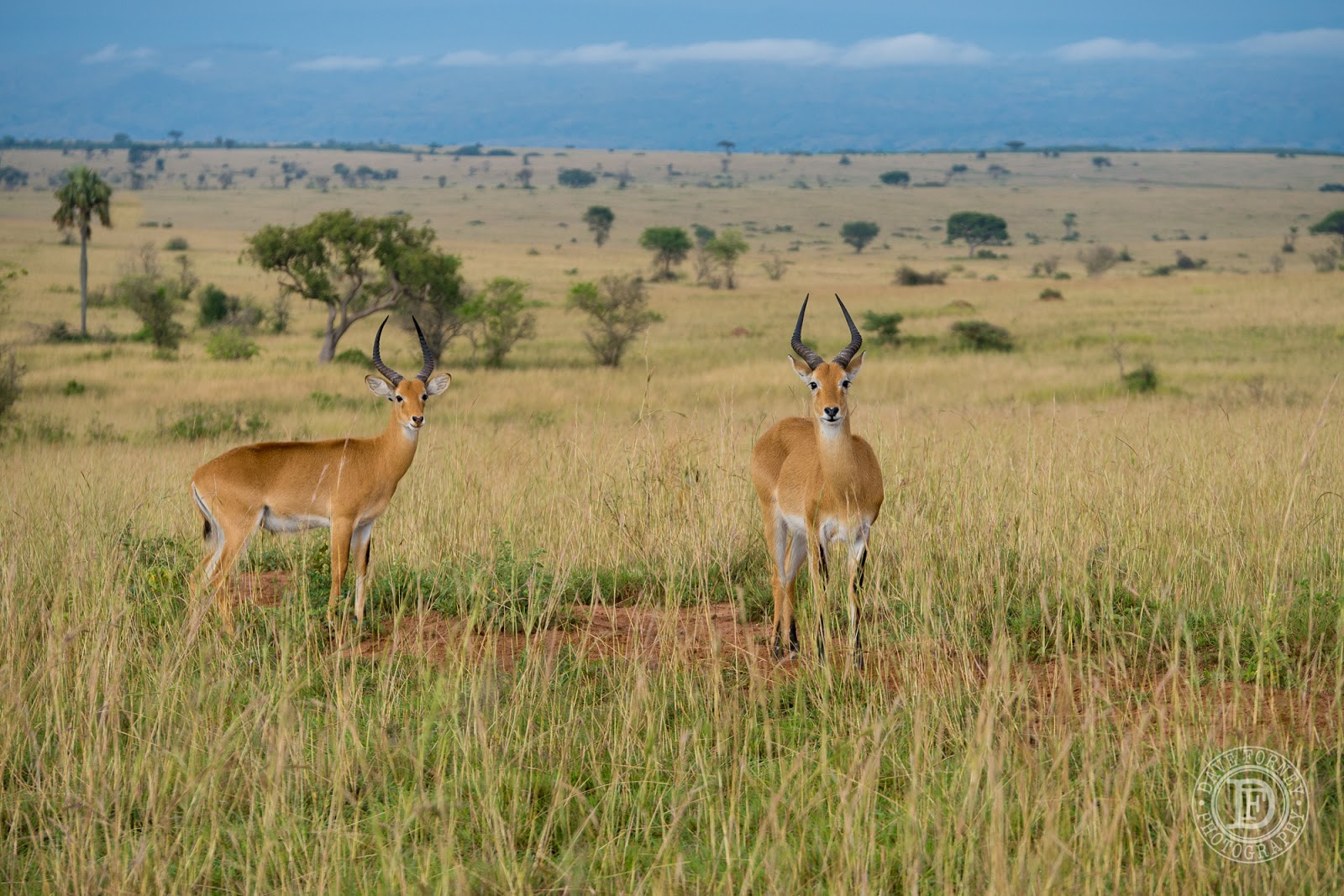 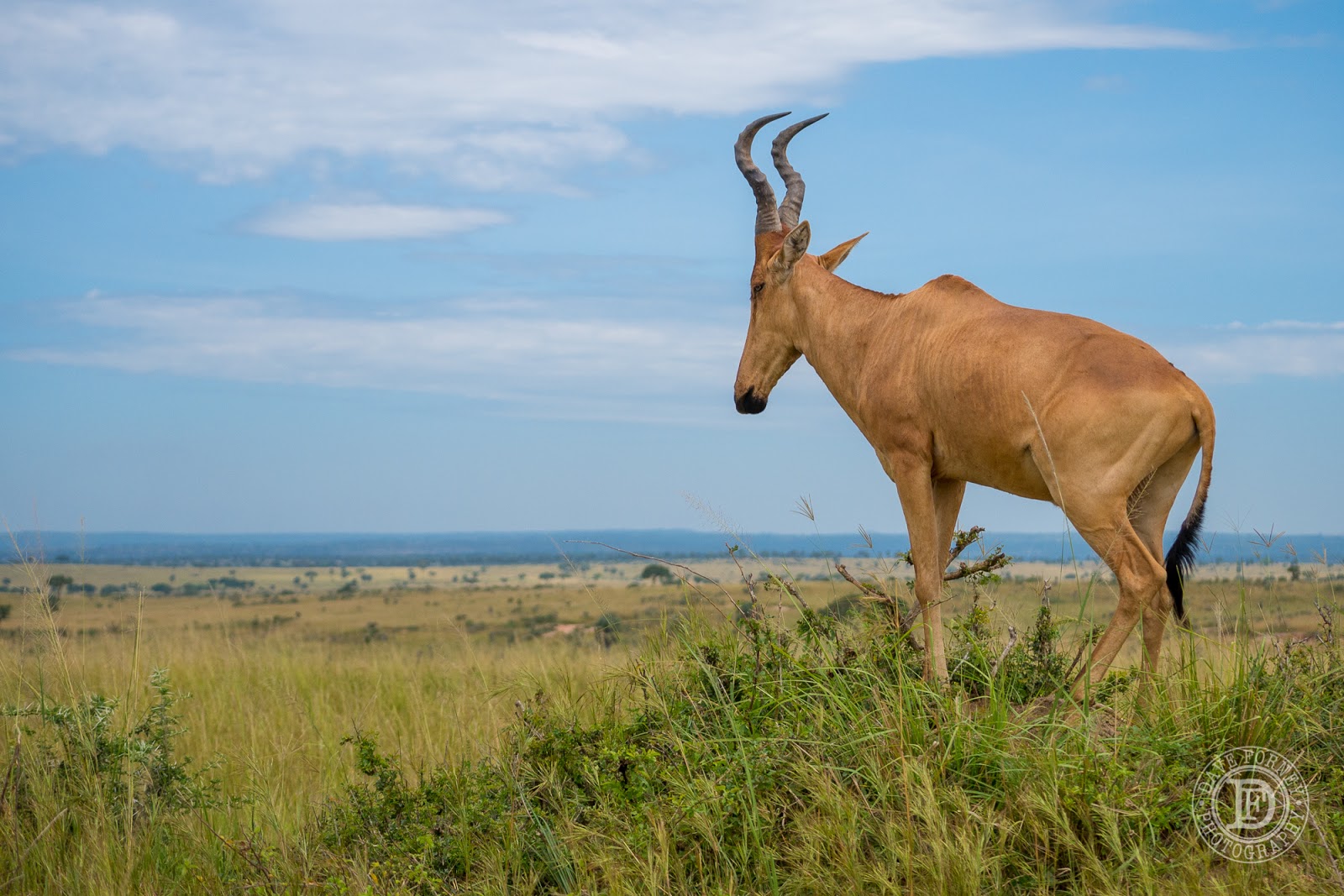 I have to say, that was certainly a very fun, overnight flight, and a lot different than any of the other overnight flights I've done in the past.   I can't wait to one day take my family up to do some camping at that park.  They'll all go nuts over the wide variety of beautiful animals, and the vast, open, gorgeous scenery!
Posted by Dave at 10:00 AM

Dave, Man alive! If you can get shots of that quality with your little camera, what are you going to blow us away with when you take your big camera next time?! Awesome little report and pics!!


PS How many times have I said "National Geographic" to you?!... your photos, and your sense of story and sentiment behind them, they would enhance any issue...

The Lady of the Holler said...

Wow Dave, God has really blessed you with the ability to see through a lens in such a way to let us see what He has made.
Beautiful.
Sandy in the UK

How exciting. That's so amazing. I'm glad you got to go. What a great experience.